Jill Peters: Sworn Virgins of Albania and The Third Gender by Aline SmithsonSeptember 12, 2013 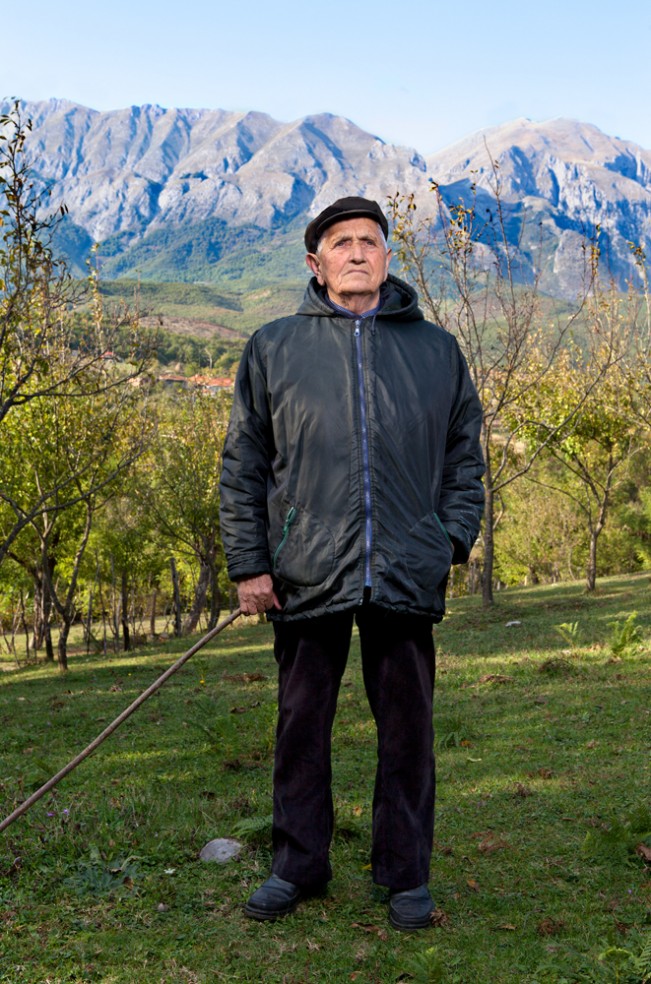 Photographer Jill Peters has two projects, Sworn Virgins of Albania and The Third Gender, that look at gender and identity in different cultures.  The first time I really considered this phenomenon was with Ann Summa‘s work, exploring at Muxes in the In Zapotec cultures of Oaxaca.  Jill Peters deftly captures these rarefied populations with curiosity and compassion, creating heroic portraits that peak our fascination with alternative lifestyle choices based on sexuality.

As an editorial photographer with an eye for portraiture, Jill’s work has appeared in Harper’s Bazaar, Details, Elle, LIFE, Interview and others. She studied Narrative/Documentary photography at Rochester Institute of Technology. In addition to her gender variance project, she is also producing her first documentary film, about the Sworn Virgins of Albania. She splits her time between Miami Beach and Southampton, New York. 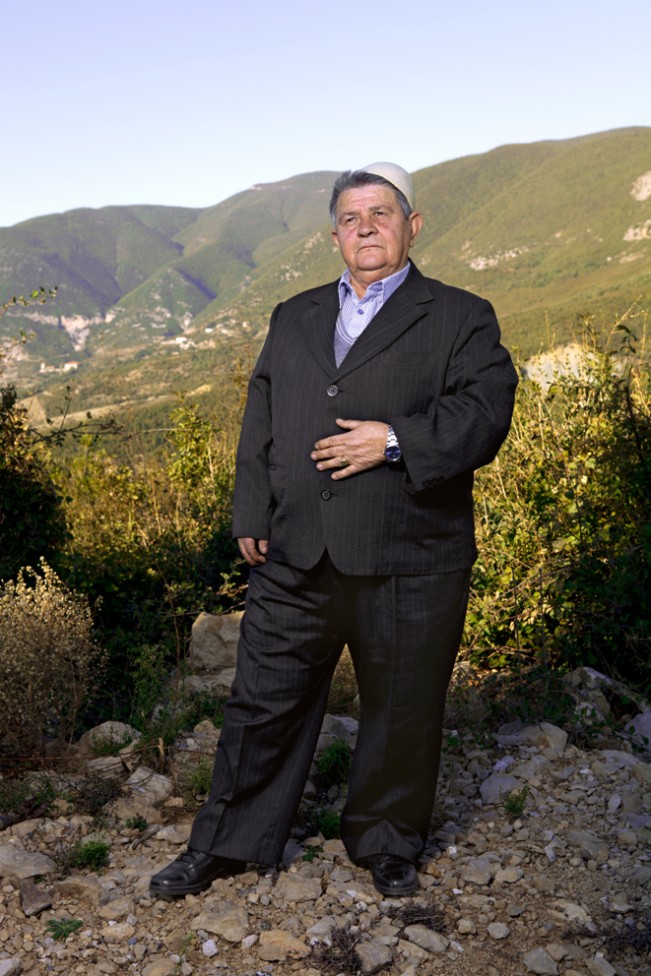 “Sworn Virgin” is the term given to a biological female in the Balkans who has chosen to take on the social identity of a man for life. As a tradition dating back hundreds of years, this was sometimes necessary in a society that lived within tribal clans, followed the Kanun, an archaic code of law, and maintained an oppressive rule over the female gender. Young girls were commonly forced into arranged marriages with much older men in distant villages. The freedom to vote, drive, earn money or own property was traditionally the exclusive province of men. A family suddenly without a patriarch or male heir would find themselves in jeopardy of losing everything. 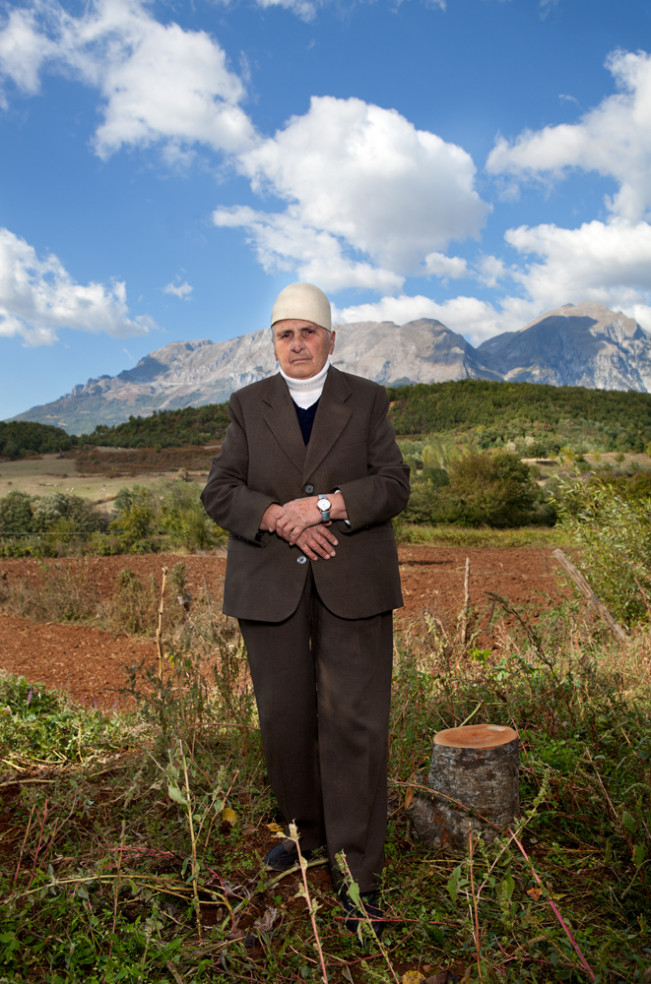 As an alternative, a daughter could become a Sworn Virgin, or “burnesha”, elevating her to the status of a man and granting her all the rights and privileges of any man. In order to manifest the transition such a woman cut her hair, donned male clothing and sometimes even changed her name. Most importantly of all, she took a vow of celibacy to remain chaste for life. As modernization inches towards the small villages nestled in the Albanian Alps, this archaic tradition is increasingly seen as obsolete. Only a handful of Sworn Virgins remain. 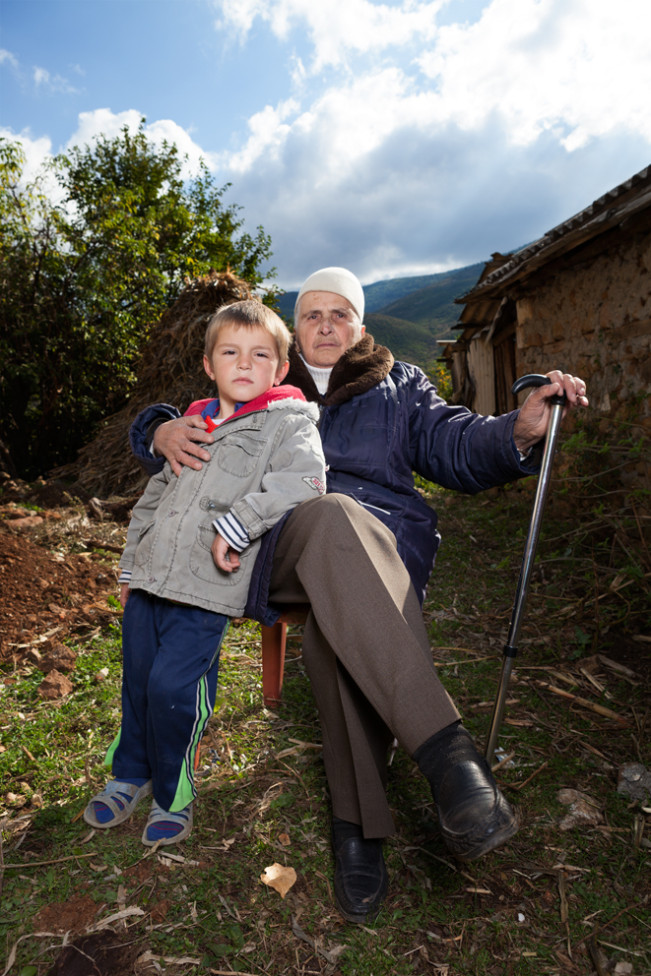 As a portrait photographer with an interest in subjects that innately speak to the diversity of the human experience, I was fascinated with this story. This is historically one of the few examples of socially accepted gender change and it is rapidly disappearing. My desire to record the sacrifice, context and experience of these women/men set me on course to seek out some of the last burnesha. I was rewarded with a small collection of people who possess an indescribable amount 0f strength and pride, value their family honor above all else, and have few regrets for all they have sacrificed. Furthermore, their absolute transition is accepted, posited and taken without question by the people among whom they live. Photographing them was my greatest privilege. 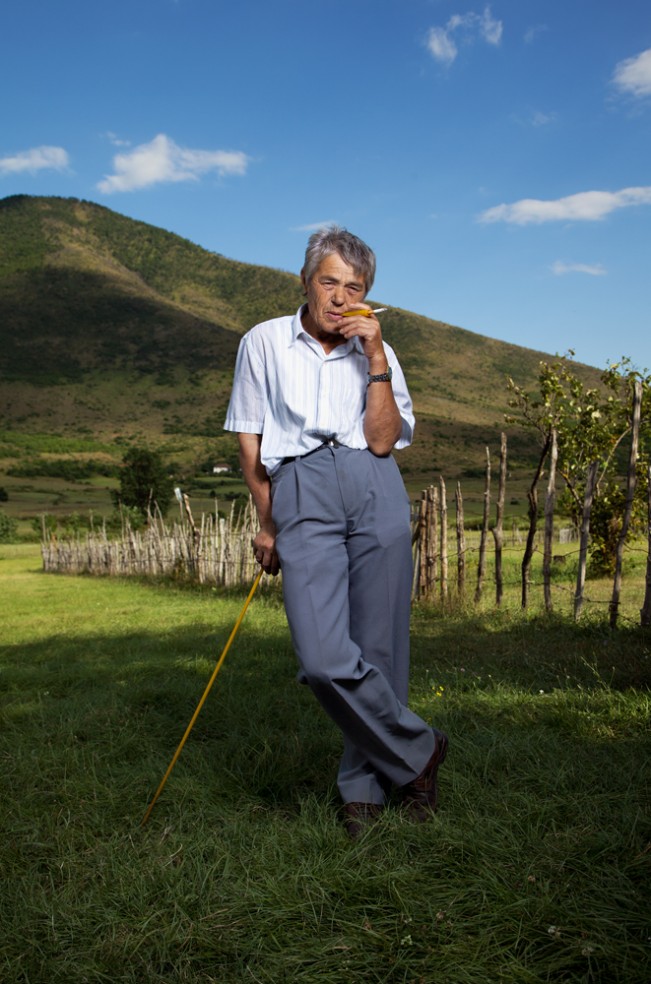 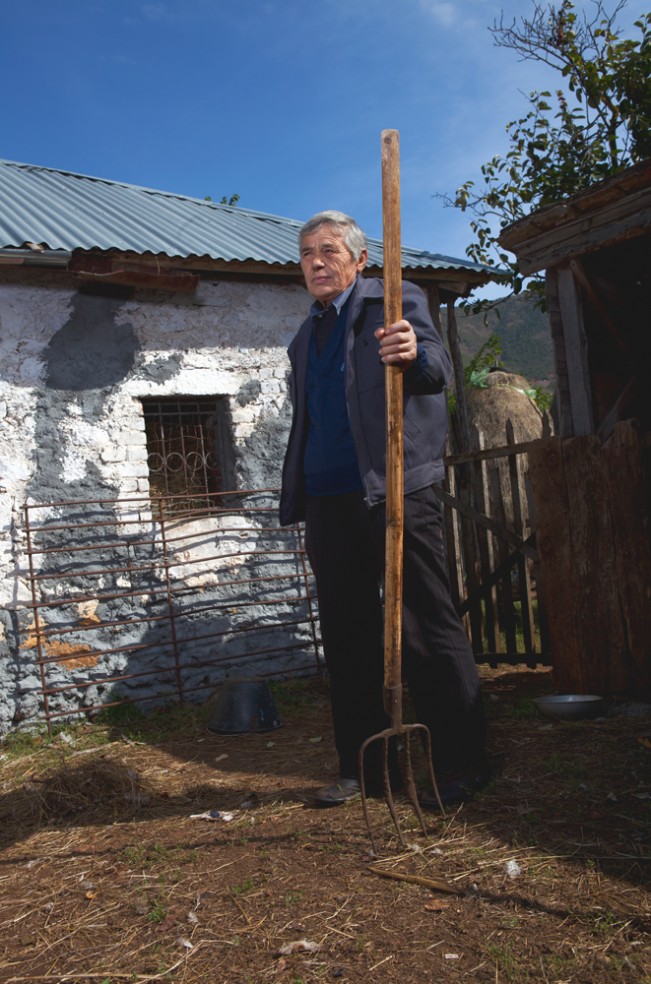 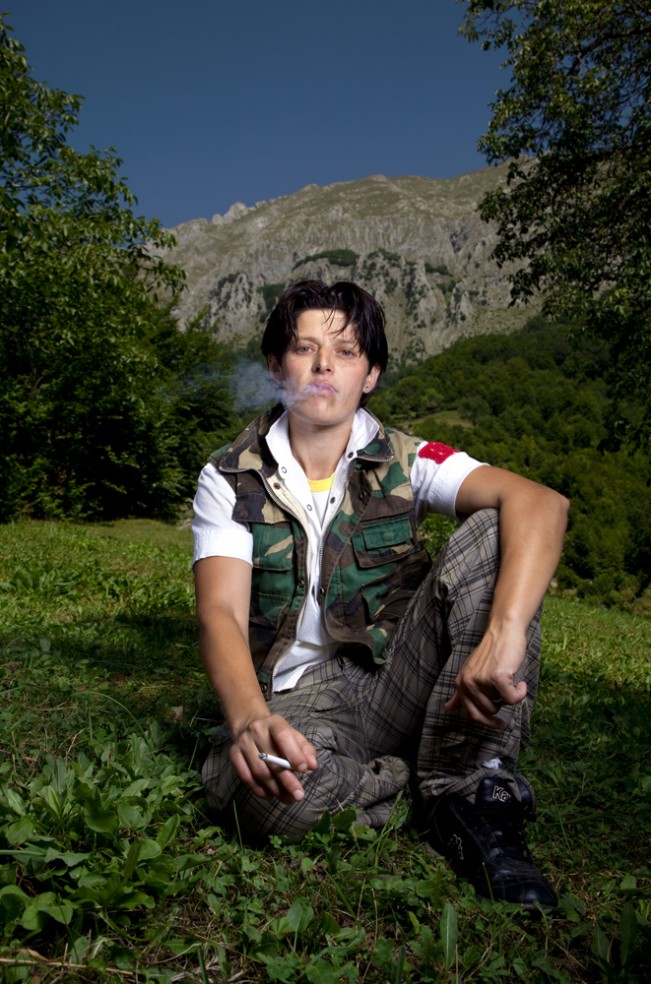 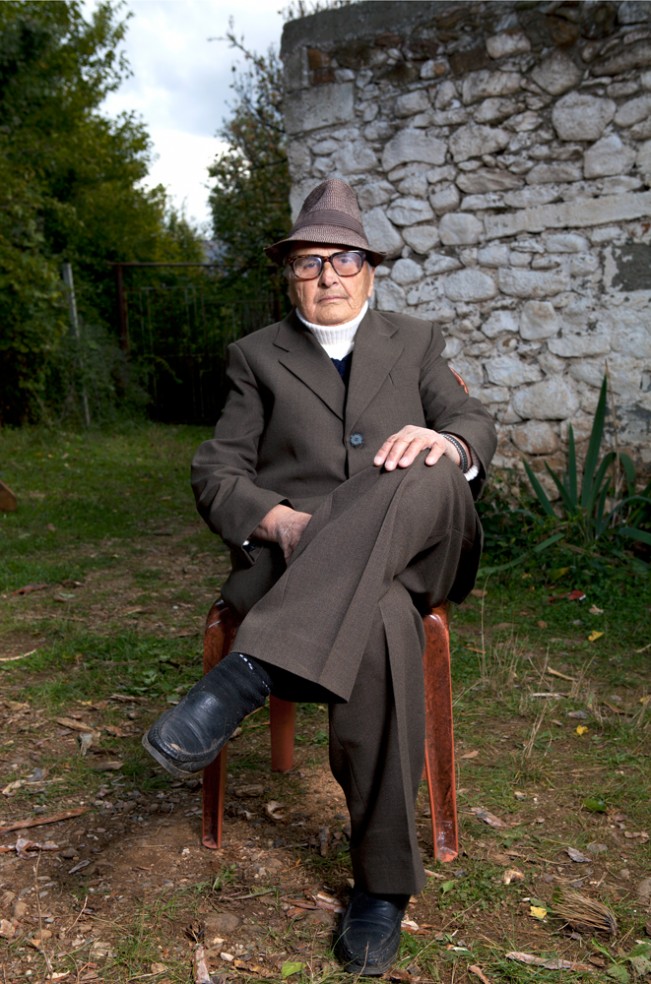 The term “hijra” applies to a very diverse group of people in India who identify as neither male nor female. These third gendered people can range from a natural hermaphrodite to a male cross dresser in a sari. My subjects here, who fall somewhere in the middle of this spectrum, are eunuchs. There are an estimated 5 to 6 million hijras in India. Less than 10% are eunuchs. 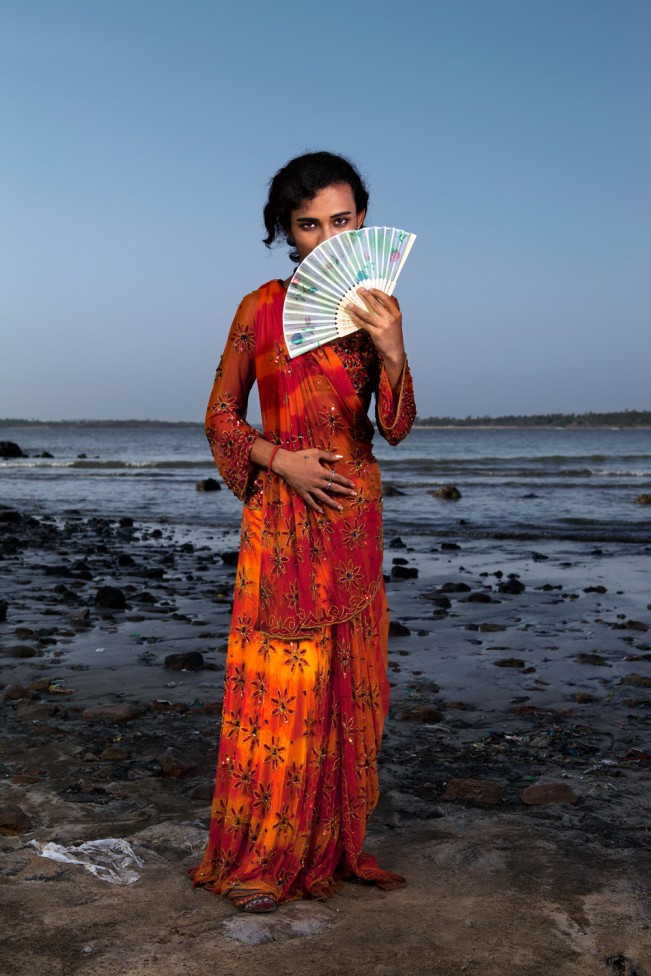 Dating back as far as the Kama Sutra by some estimations, hijras were both revered and feared as powerful entities who lived between the sexes. They were believed to bestow good fortune and fertility by dancing at weddings and the births of children. Over the course of history their status and usefulness in society survived centuries of historical evolution. Within the last 150 years, as western prejudices have encroached upon Indian codes of sexual morality, the hijras have fallen precipitously from grace. 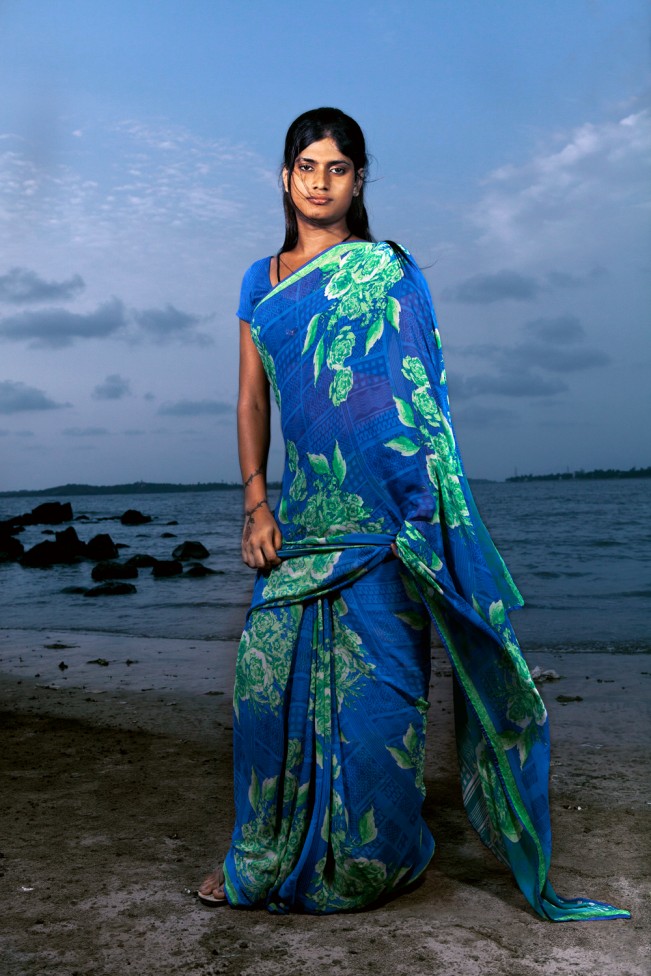 Today, hijras live on the margins of society. They face severe harassment at the hands of the state and the wider population. Police brutality and sexual assault are common. Because hijras are generally seen as unemployable, they have resorted to sex work and begging for survival. This creates a catch-22 whereby their reputation as second-class citizens is further stitched into the fabric of society, and they find it impossible to escape this endless cycle of dehumanization. This dark prospect, however, has done little to stem the tide of young boys who are irrepressibly drawn to the big cities by their innate femininity. 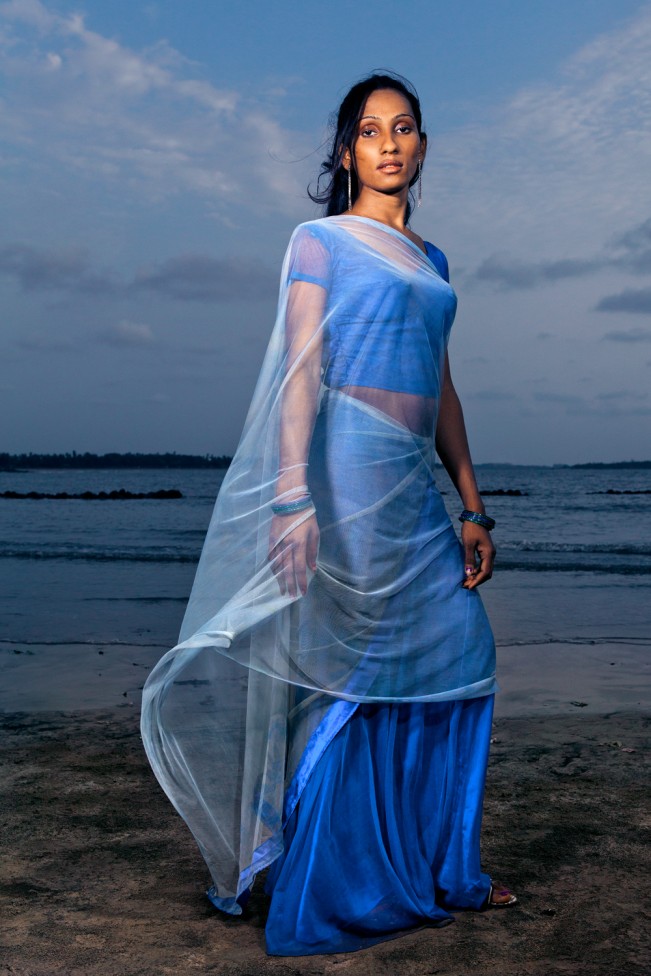 I chose to photograph my subjects on the beach near the Malwani slum in Mumbai. My intention was simply to portray them as the objects of beauty and grace they so desperately strive to be, as if their path to nirvana had not been impeded by a century and a half of prejudice and intolerance. 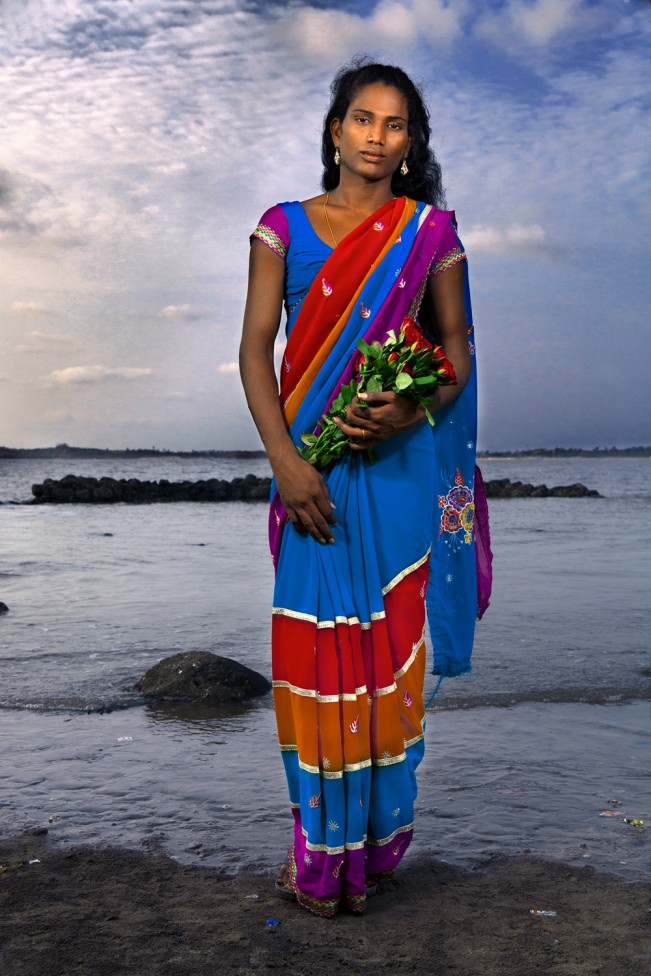 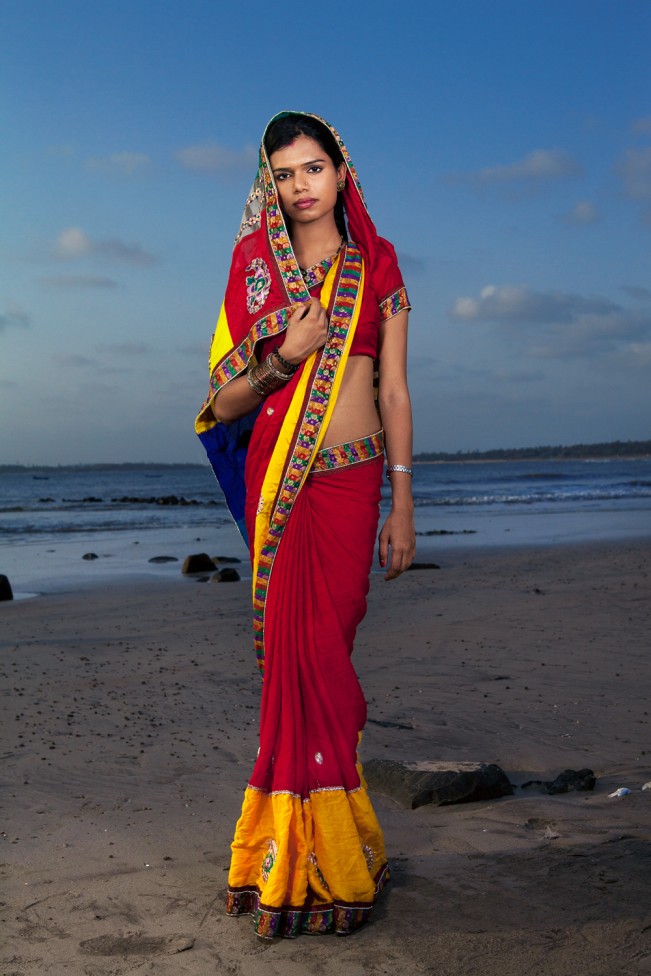 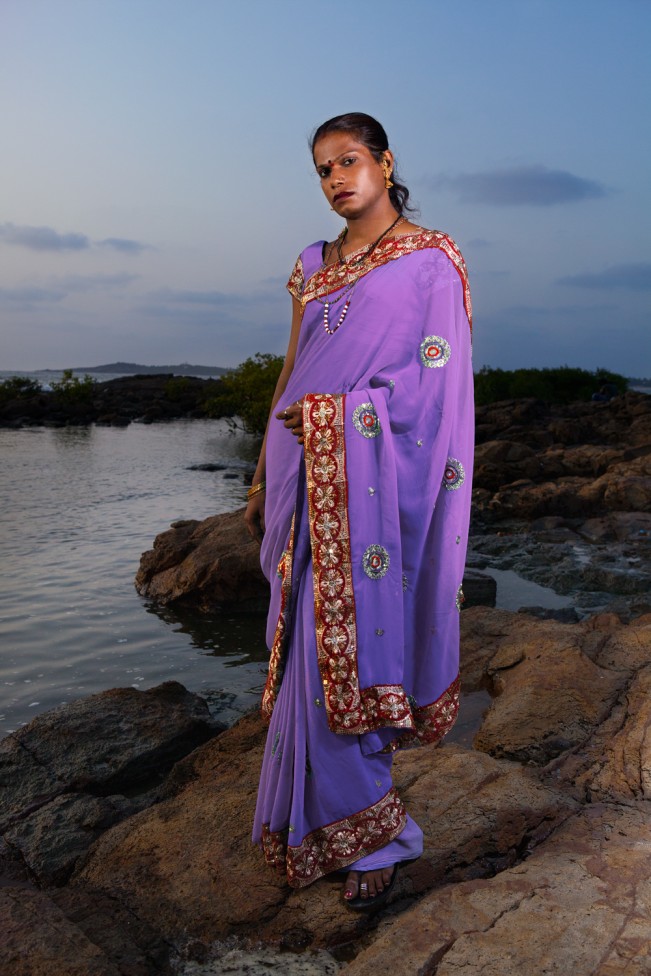 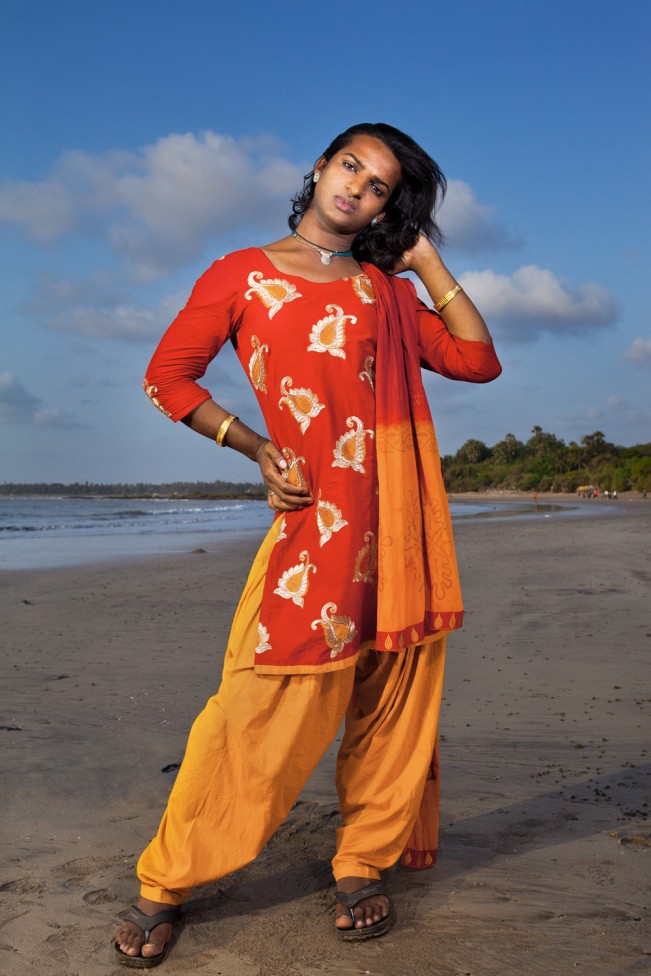 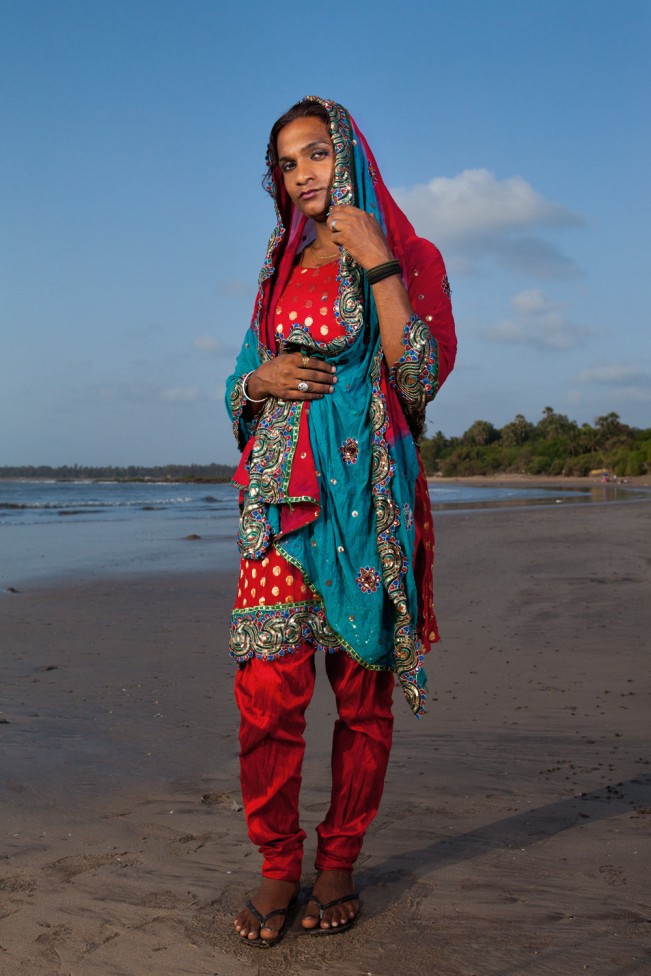 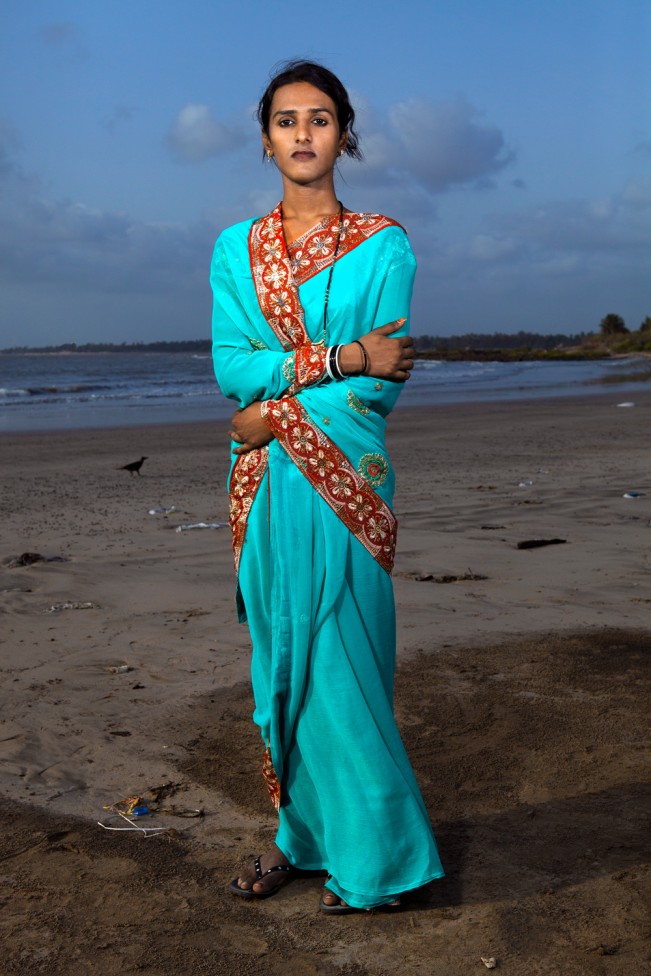 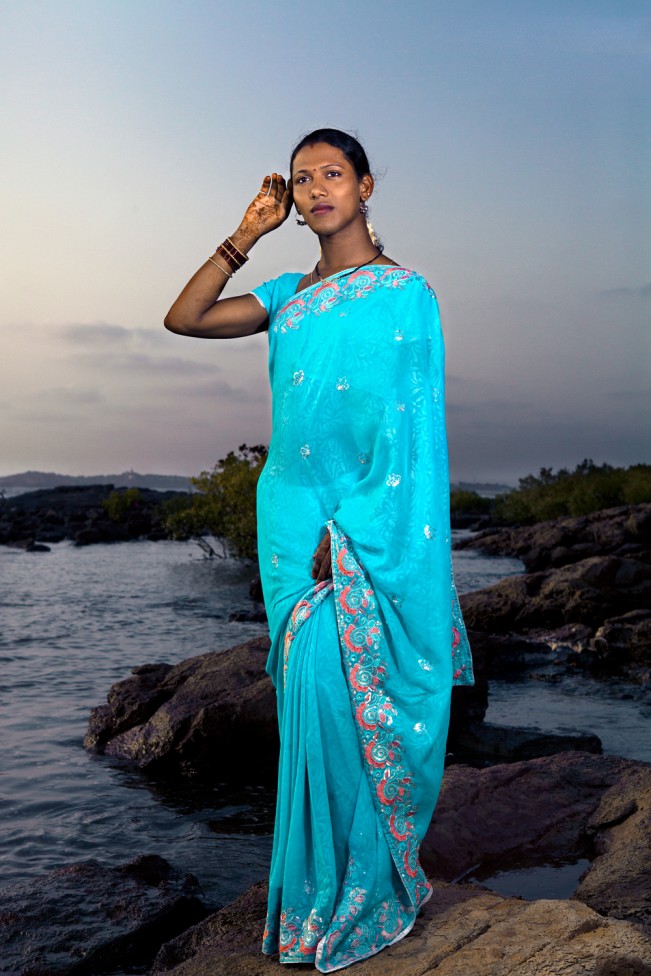 NEXT | Sara Macel: May the Road Rise to Meet You >
< The Jason Landry Mixtape | PREV