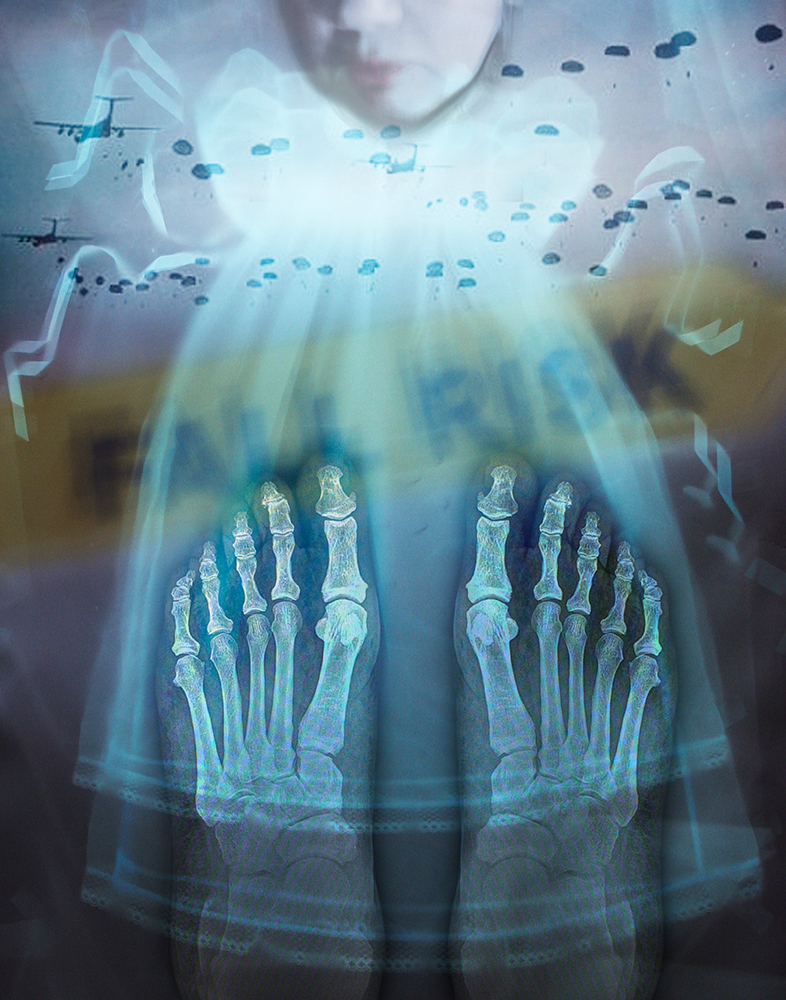 Projects featured this week were selected from our most recent call-for-submissions. I was able to interview each of these individuals to gain further insight into the bodies of work they shared. Today, we are looking at the series HY•ST•ER•IA: Body as Battleground, by Diane Fenster. 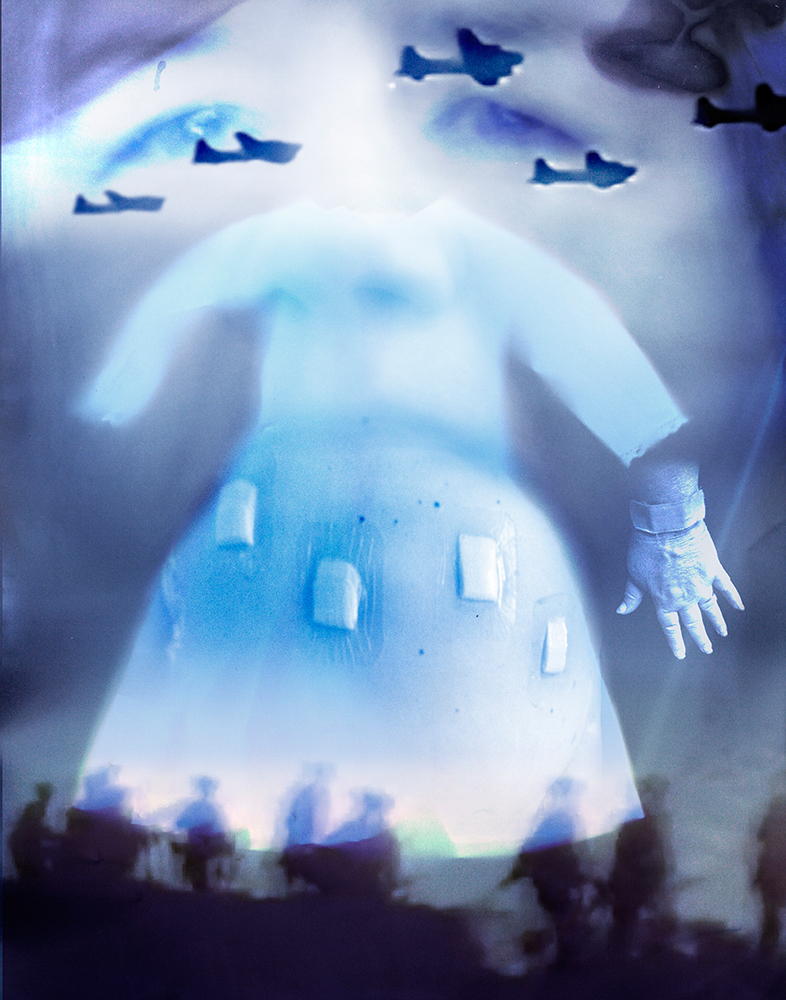 “The term hysteria comes from the Greek word “hysterika”, meaning Uterus. In ancient Greece it was believed that a wandering and discontented Uterus was blamed for that dreaded female ailment of excessive emotion, hysteria.” – Hysteria and the Wandering Womb

Last year I was diagnosed with Stage 1 endometrial cancer and had to undergo a complete hysterectomy. I embarked upon this series in an attempt to fathom and artistically represent the emotional and physical changes that my body is going through.

The dress is the center stage upon which my drama unfolds and speaks to my sense of a lost femininity due to the loss of my womb. Symbols from a tarot card reading done prior to the procedure refer to my surgery and psychological response. Photographs of my body, medical procedures, and human conflict are some of the actors in my performance.

I use a variation on the antiquarian lumen printing process to obtain the images of the dresses. The original lumen process used plant material placed on photosensitive paper and exposed by the sun. For this work I place baby dresses onto black and white photo paper and place this outdoors for the sun to expose so I can obtain the numinous haint-blue ghostlike images. I then combine these dresses with other photographic methods to obtain the final images. 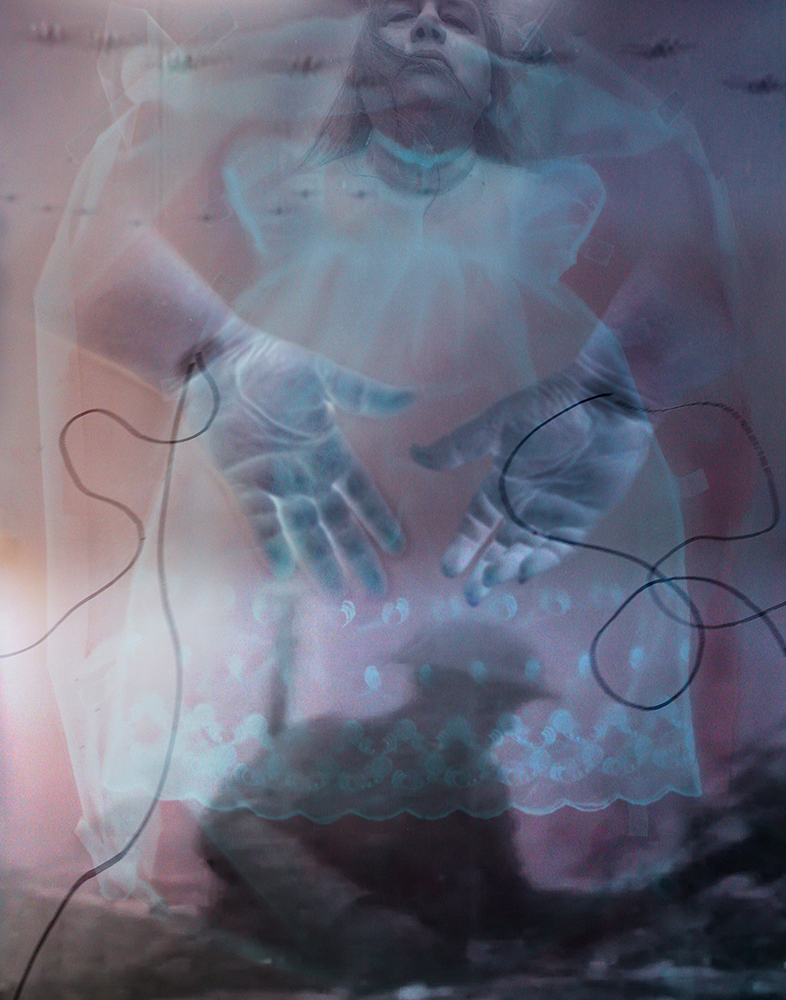 Daniel George: Being diagnosed with cancer must have been extremely difficult. When did you decide that you wanted to make art in response to your experience? Did this help you?

Diane Fenster: As I recall, I began thinking about the possibility of creating a series based on my experiences almost as soon as I was informed that I had cancer and would need to have surgery. Many of the series I have worked on stemmed from personal issues that I was attempting to process both mentally and emotionally. For me, it is a journey into my subconscious mind that allows me to deal with the rawness in a creative and integrated way. 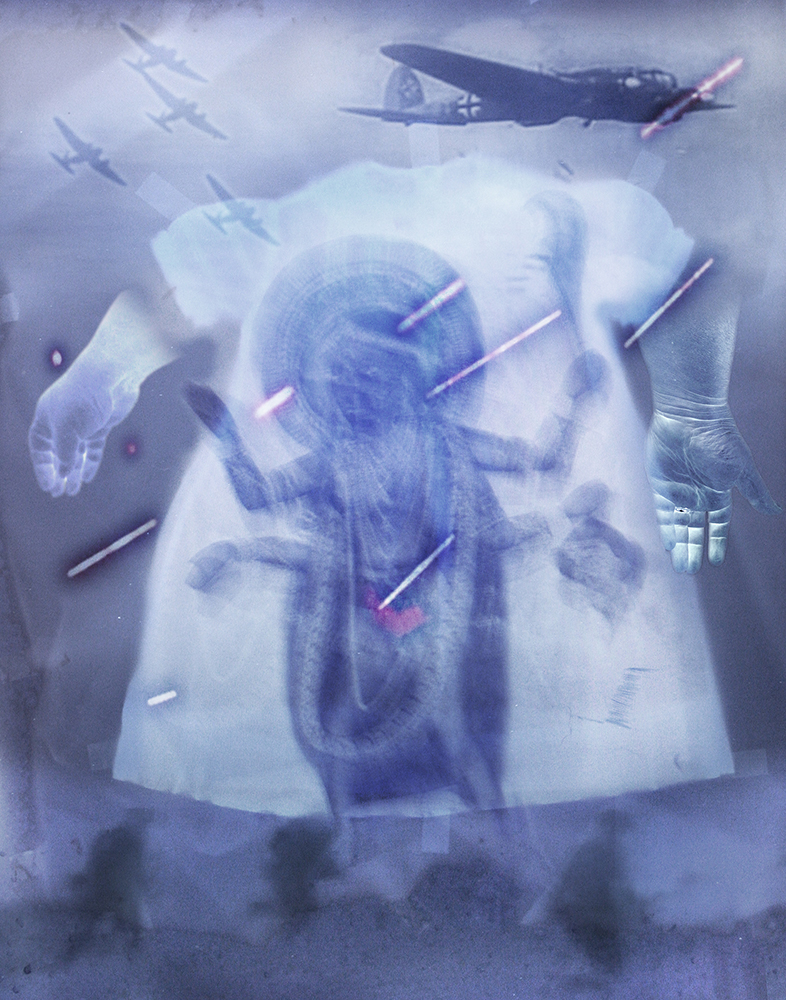 DG: Tell me more about the significance of the themes present in your images—particularly those of the body and war.

DF: I photographed my own body parts but configured them in a disjointed manner to represent my chaotic sense of self at the time. When I think of cancer, the first thing that comes to mind is being under siege by hostile forces so it seemed a natural extrapolation to use war imagery to represent my feelings of being under attack. 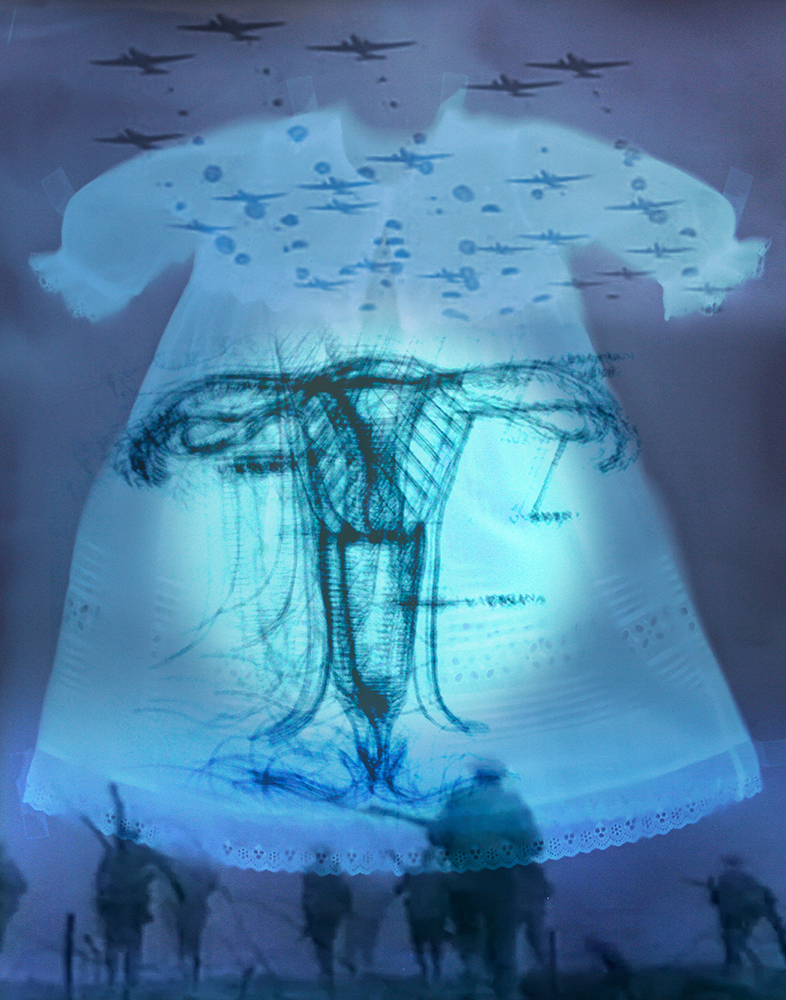 DG: Your final images are a combination of a few different photographic processes, including lumen. Why did you feel this was the most appropriate way to communicate your message?  How do these various modes of image-making contribute to the photographs?

DF: My images tell stories so I use whatever processes I feel will best convey what I am trying to say. I am particularly drawn to lumen prints as they introduce a way for accidents to occur. They also have a ghostlike, out of focus quality that indicates a loss of control, mirroring the lack of control I was feeling. 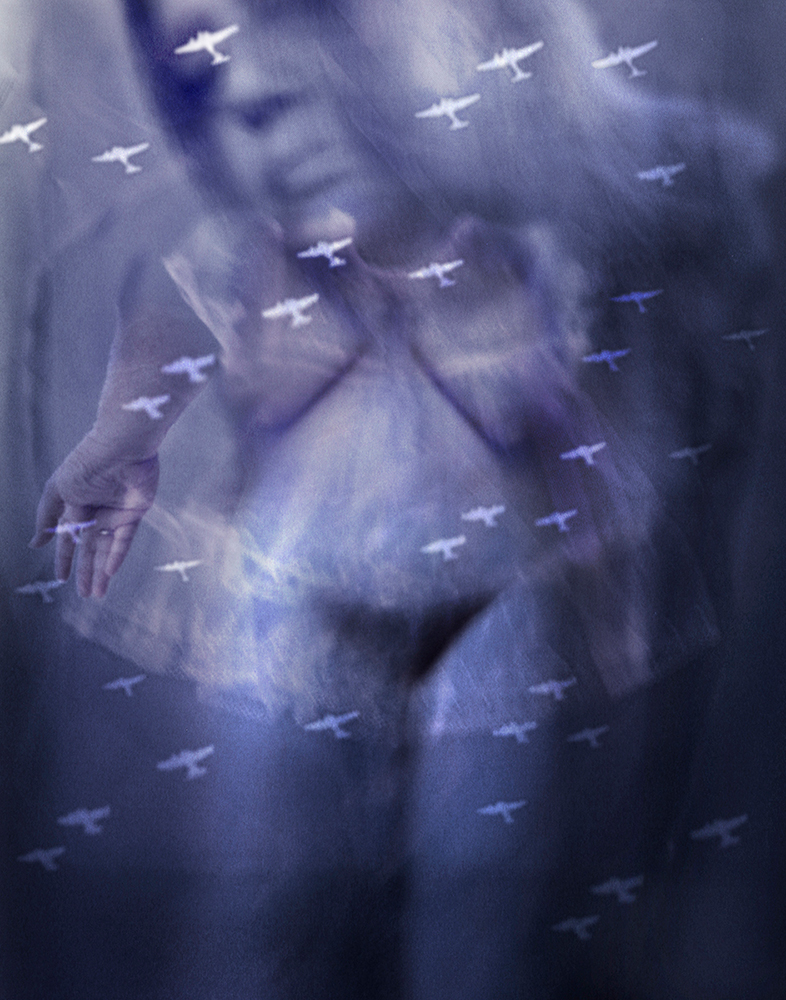 DG: I am interested in the derivation of the word hysteria, which is in the title of the project, and how it simultaneously refers to both the uterus and a sort of frenzied emotion. Tell me more about your intention with this dual meaning.

DF: The meaning of hysteria touches on a number of the issues I was confronting. Emotionally, I bordered on “hysteria” at times out of fear of the cancer but I was also grappling with the notion that the removal of my womb meant the loss of my essential femininity, as represented by the dresses. 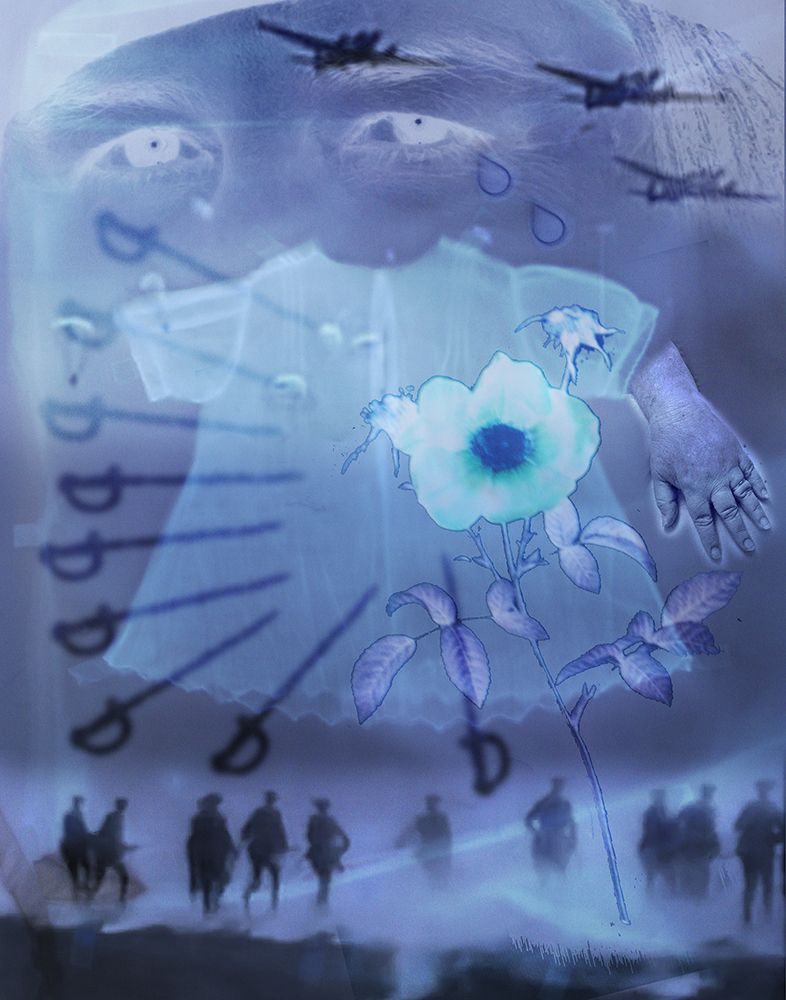 DG: Where do you see these photographs going, and in what ways do you see them contributing to the dialogue on human health issues?

DF: I’d like to think that the series will act as a mirror, especially for the women facing their own journey through a hysterectomy and help them come to terms with their own loss, as it has helped me. 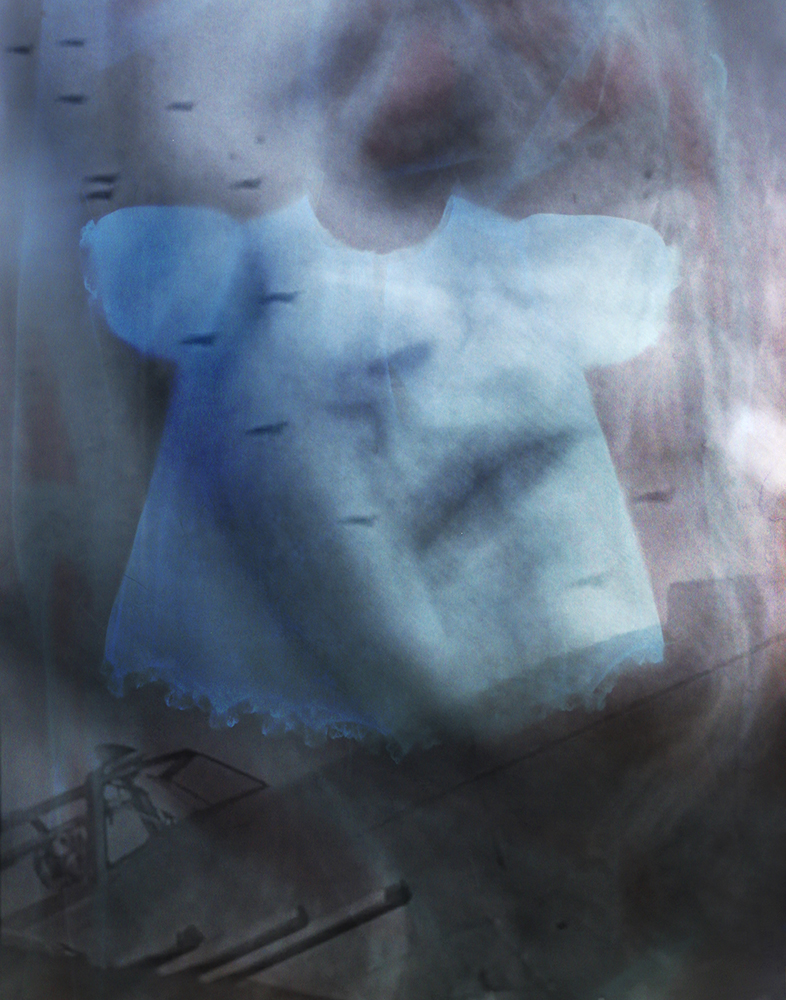 Diane Fenster’s art first received notice during the era of early experimentations with digital imaging. Her work has been called an important voice in the development of a true digital aesthetic. She views herself as an alchemist, using digital tools to delve into fundamental human issues. Her images appear the APERTURE monograph METAMORPHOSES: PHOTOGRAPHY IN THE ELECTRONIC AGE, WOMEN, ART AND TECHNOLOGY published by MIT press, ART IN THE DIGITAL AGE edited by Bruce Wands, School of Visual Art, NYC and her work is internationally exhibited and is part of museum, corporate and private collections.

Recently Fenster has been venturing into an exploration of imagery that has its roots in toy camera photography, alternative process and photo-encaustic. Silver Award Tokyo International Foto Awards for HY•ST•ER•IA. Her work was exhibited in the 4th Biennale of Fine Art and Documentary Photography in Berlin, she received Honorable Mentions in the 9th Pollux Awards, 7th, 8th, 11th and 12th Julia Margaret Cameron Awards and the Moscow Photo Awards, included in the Alternative Process exhibits juried by Christopher James at the Center for Fine Art Photography and the Texas Photo Society, published in the DIFFUSION ANNUAL 2016 and will be in the upcoming DIFFUSION ANNUAL X. Diane Fenster & the Wandering Womb (HY•ST•ER•IA series) was published in Harvard’s OD Review. HY•ST•ER•IA is included in Femme Fotale’s upcoming Health issue and in Underexposed Magazine. HY•ST•ER•IA images were selected for the National Photography Competition-Developed Work at the Midwest Center for Photography. Images from the Midnight Mysteries series appeared in the premier issue of All About Photo selected by editor, juror, Sandrine Hermand-Grisel.

Memory of an Extinct Anatomy was accepted into the Women’s Caucus for the Arts/Colorado Chapter “Passage” exhibition at the Liza Knoll Gallery in Denver, CO–opening November 15th, 2019. 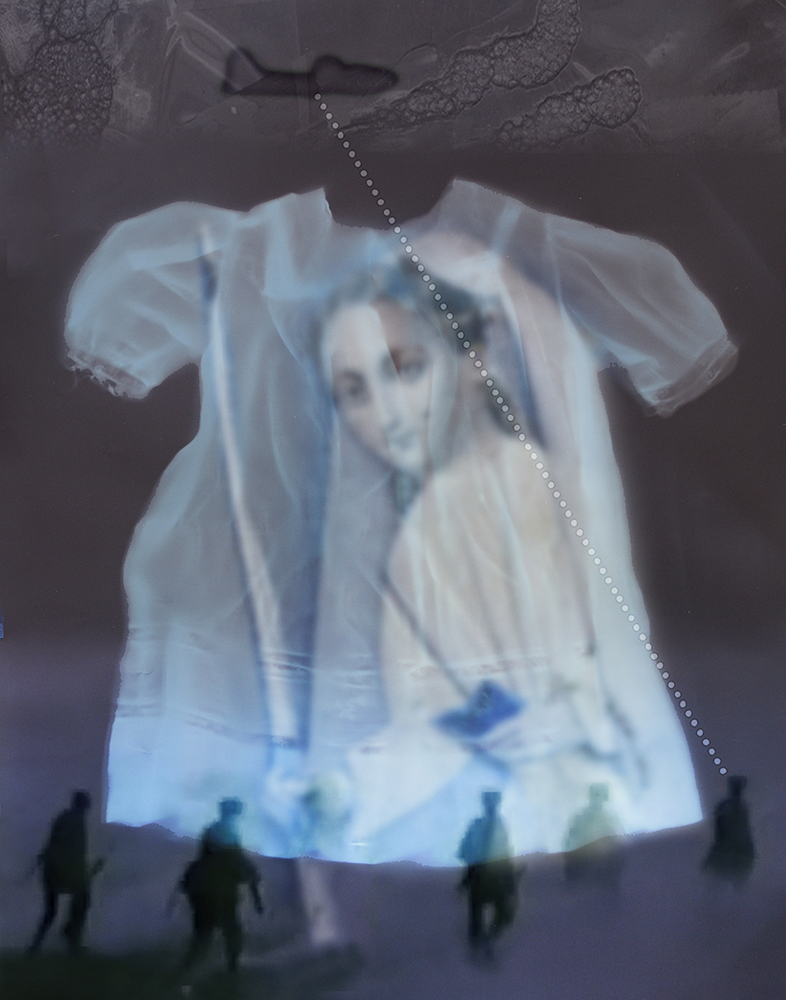 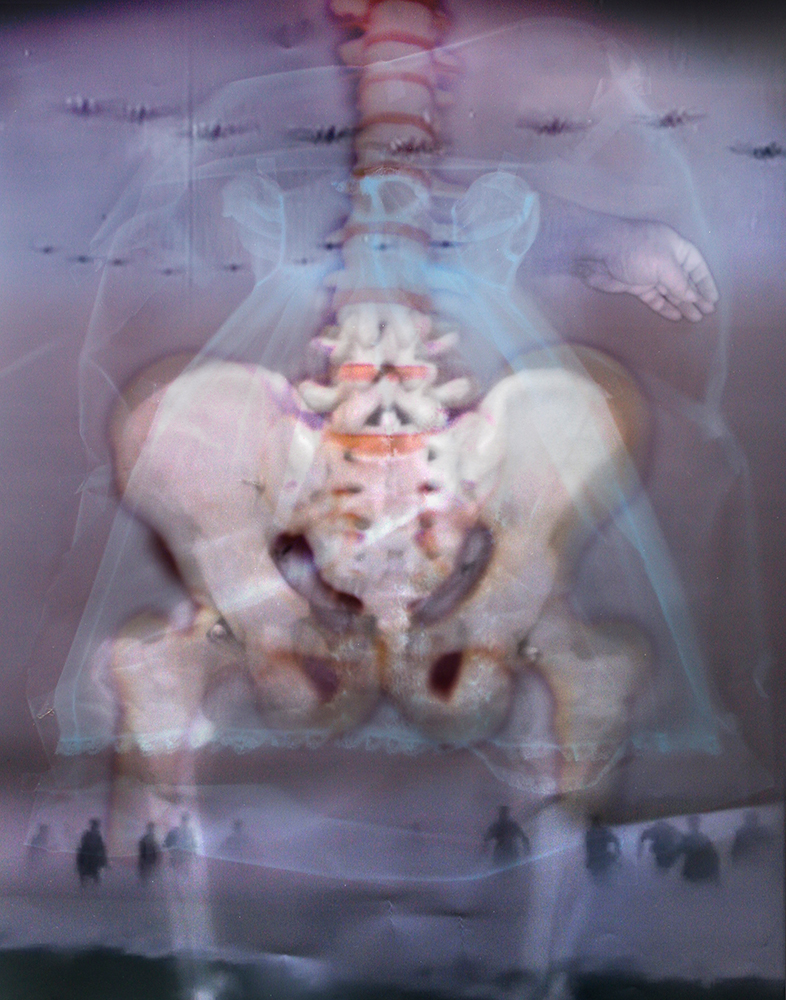