We are a community that has been able to harness the power of the Internet, social networking, and amazing goodwill to create remarkable things. In the past several years, I have been a part of many auctions, some of the most meaningful have been in response to global tragedies, most recently in Haiti.

Friday, after seeing the horrors of the Japanese Tsunami/Earthquake, I remarked on Facebook that I would be willing to donate to an auction if anyone was organizing one. I got an e-mail from my friend, gallerist Crista Dix of Wallspace Gallery, telling me that she was thinking the same thing. Then I heard from the Jennifer Schwartz Gallery that they were on board for an in-gallery auction on March 19th. And yesterday at 3pm, 30 hours later, Crista had managed to create a massive on-line auction, with editions generously donated by photographers from around the globe. THAT is harnessing the force of nature that is us.

The site is Life-Support Japan, and it is now live. The funds will be donated to Direct Relief for medical aid and Habitat for Humanity for rebuilding. Please take a look! Editions have sold out, or are selling out and don’t wait to buy! Everyday, new images will be added, so keep checking back. 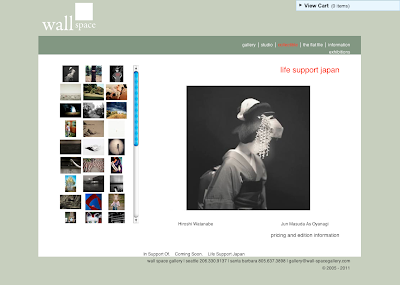 Over the next weeks, the site will be adding more images, kinks will be worked out, and by mid April (after Photolucida), prints will start to go out to buyers.

Yesterday, feeling choked up about what I was seeing on television, I called my son and said that working on my photography seemed so meaningless during all of this, and he said he was feeling the same thing, but today, I see the tremendous meaning in what our photography can create, in an auction, in telling a story, in exposing untold horrors, in making someone laugh or cry, and that is what makes me so proud to be a part of this wonderful community. The post that follows, about Greenpeace and the Chinese photographer Lu Guang, is a perfect example of the power of photography.

A huge thank you to Crista Dix, Jennifer Schwartz, and Ryan Nabulsi for all their continued hard work.