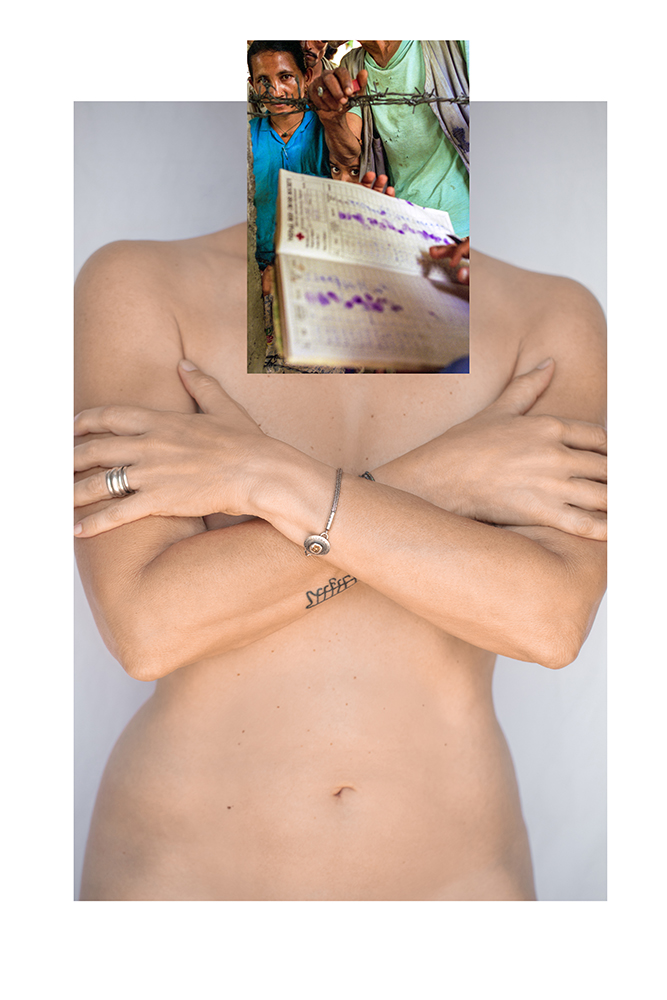 ©Ann Inger Johansson, Privileged I, I was not a refugee.

Photojournalist Ann Inger Johansson  has spent a lifetime traveling the globe, using a camera to tell powerful stories. In reality, she bears witness to what it is important for us to consider–difficult subjects like climate change, political strife, and the human condition. It is rare for a journalist to move their work into the conceptual, fine art arena, but her project Privileged, does just that. It speaks to not only a subject she has well-documented–immigration, but to a personal recognition that all skin is not created equal. Using self-portraits of her own white skin, she juxtaposes photographs that she has taken as a photo journalist, recognizing the inequality of those who do not meet Washington D.C.’s preferred immigrant group requirements.

Ann has 20 years of experience working as a freelance photojournalist for publications such as The New York Times, The Wall Street Journal, The Guardian, Le Monde, The Smithsonian and Der Spiegel among many others. Ann was commissioned by Klimahaus, a 200,000 sq. ft. educational space about climates and climate change in Bremerhaven, Germany, ​to travel to six countries and document people living in different climate zones.  Her work can be seen throughout “The Journey” exhibition.
​
​Her photographs are part of The Museum of Photographic Arts, San Diego, permanent collection and she recently exhibited in a group show at the Houston Center for Photography. Ann Inger Johansson is based in Los Angeles. 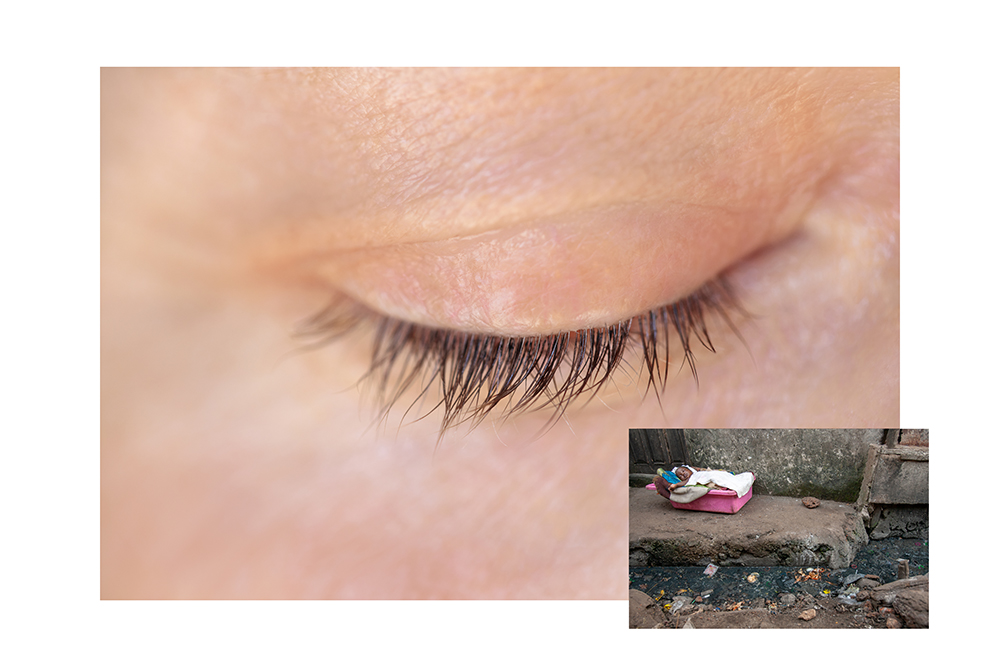 having special rights, advantages, or immunities.

As a career photojournalist, I have been photographing issues about immigration for decades. My intimate experience with this subject has allowed me to witness the hypocrisy of today’s immigration policies.  It has also made me keenly aware that I too am an immigrant, a white immigrant. In this time of heightened scrutiny of immigrants from some parts of the world I am deeply troubled by what is happening and at the same time acutely aware of the advantages being a white immigrant has granted me.

My project “Privileged” is a reaction to the disparities I recognize because of the color of my skin.

In “Privileged” I juxtapose staged photographs of my white skin with images I have taken, while working as a photojournalist, that speak to different aspects of immigration. “Privileged” represents my personal experience as well as the current “sacredness” of white United States of America and the perceived ”invasion”  by people who do not look liked the privileged group.

Note: the skin images have been partially re-touched to give a “pristine” fake reality leaving the hidden part of each image un-retouched. 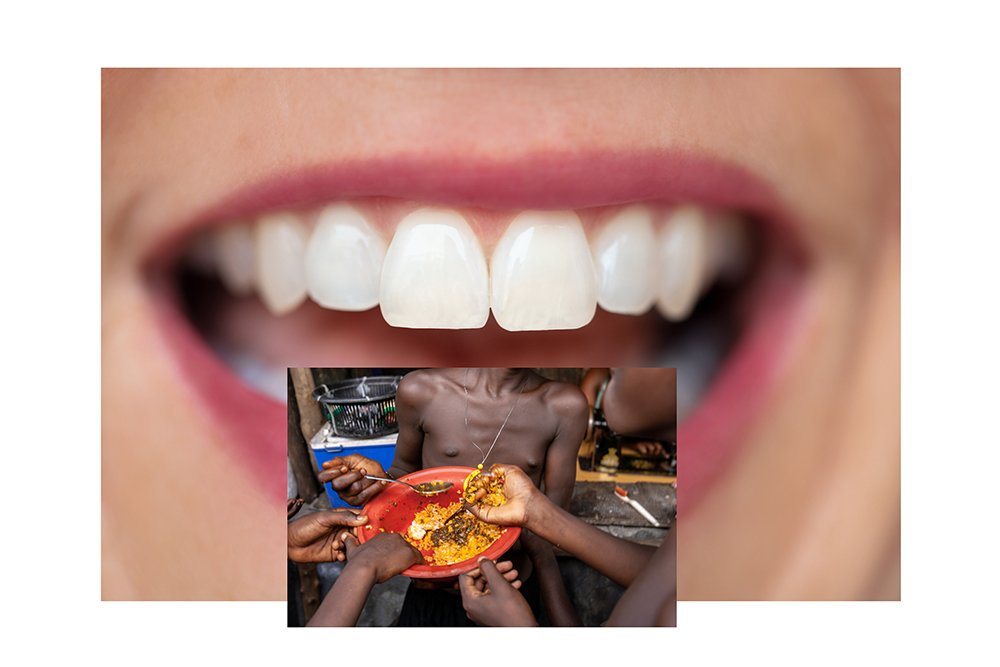 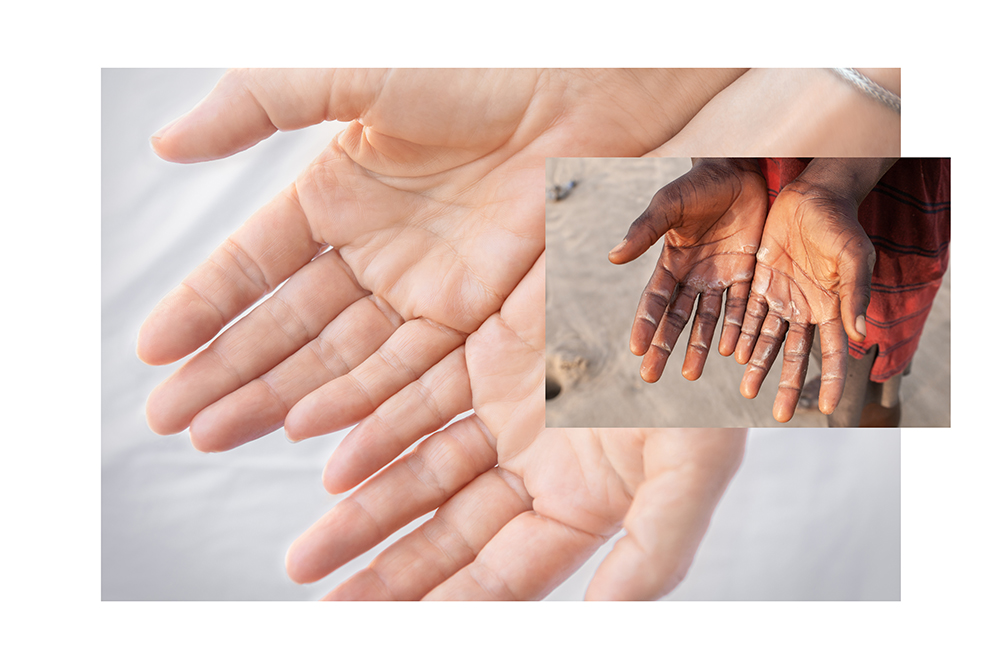 A fisherman shows his hands, calloused from pulling nets, in Aberdeen near Freetown, Sierra Leone, November 15, 2008. More than 20 men helped haul fishing nets all morning for a meager catch that left many without fish. 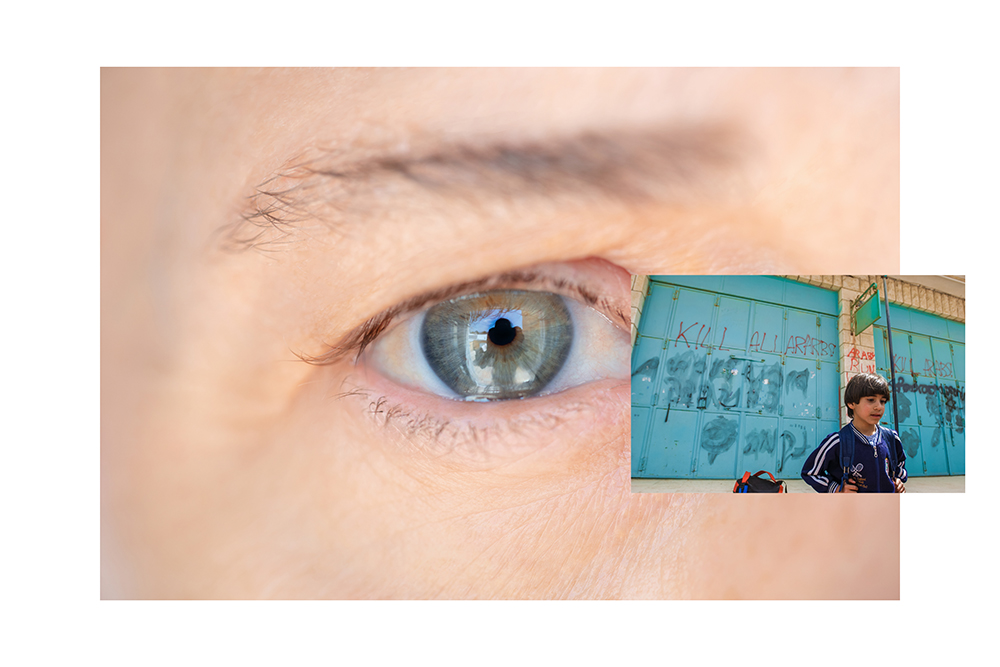 ©Ann Inger Johansson, Privileged V, I didn’t feel hatred because of my ethnicity.

A Palestinian child stands in front of a closed Palestinian shop with graffiti reading ‘KILL ALL ARABS’, in Hebron, the West Bank, Palestinian Territories, April 8, 2003. A curfew was imposed on Palestinian shops by Israeli forces in the city center of Hebron. 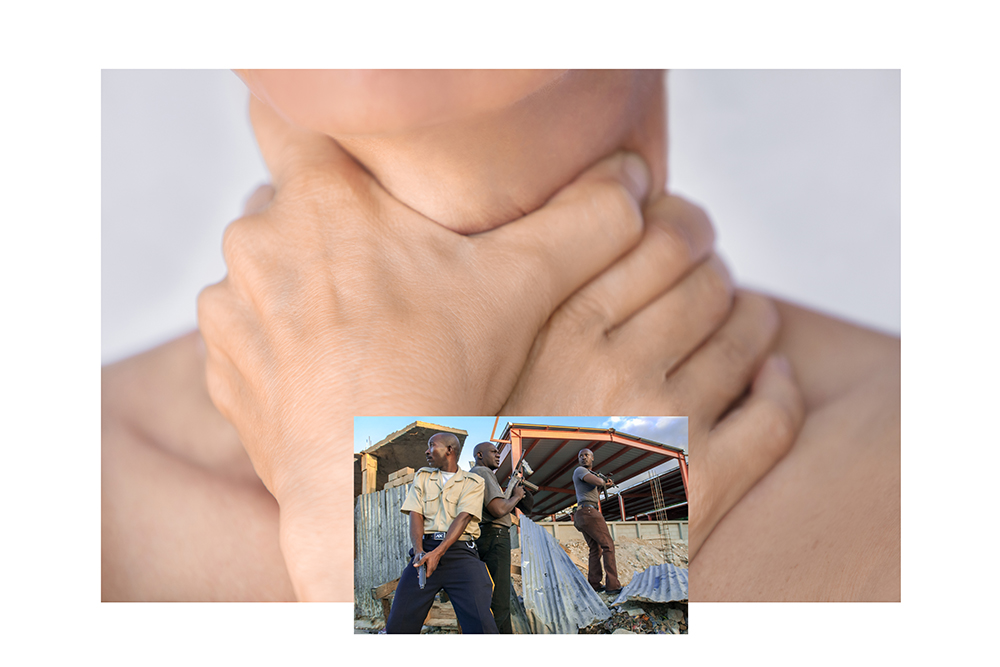 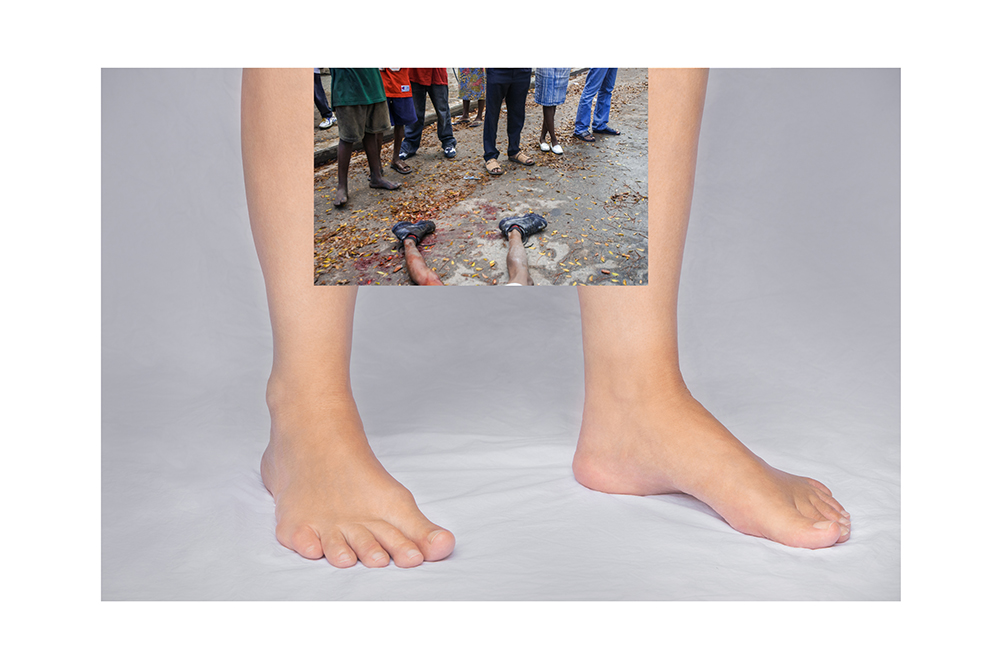 People gather to look at a man tortured and killed left on a street in Port-au-Prince, Haiti, February 28, 2004. 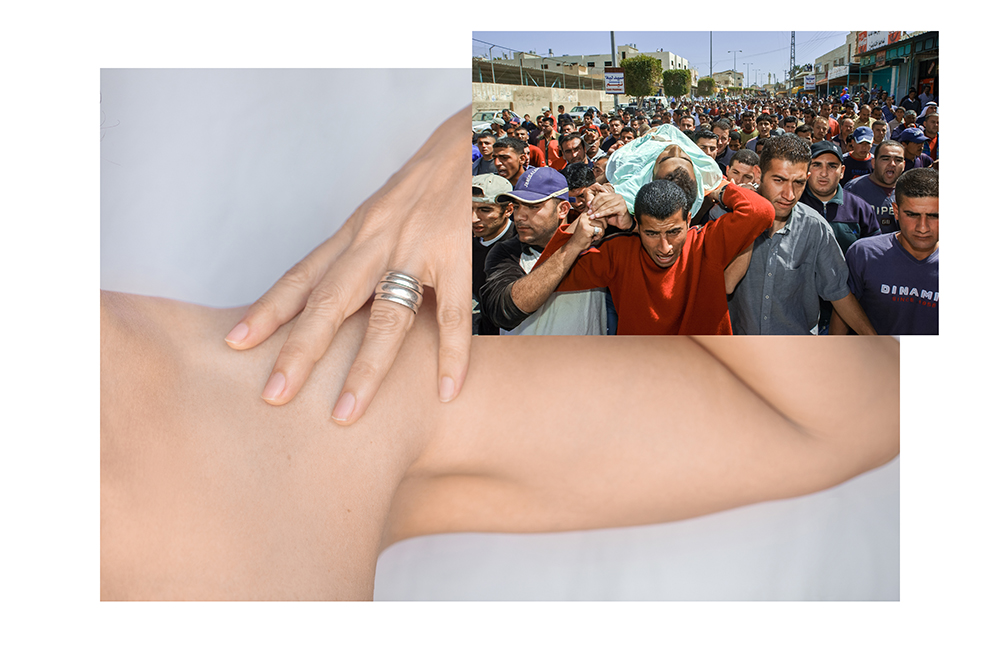 ©Ann Inger Johansson, Privileged VIII, I didn’t have to bury a friend killed in a political struggle.

Palestinians carry the body of Ghaseb Mahmoud al-Hawarin during his funeral in in the town of Dahriya, South of Hebron in the West Bank, Sunday April 13, 2003. Al-Hawarin was killed by Israeli soldiers in clashes in Hebron yesterday. 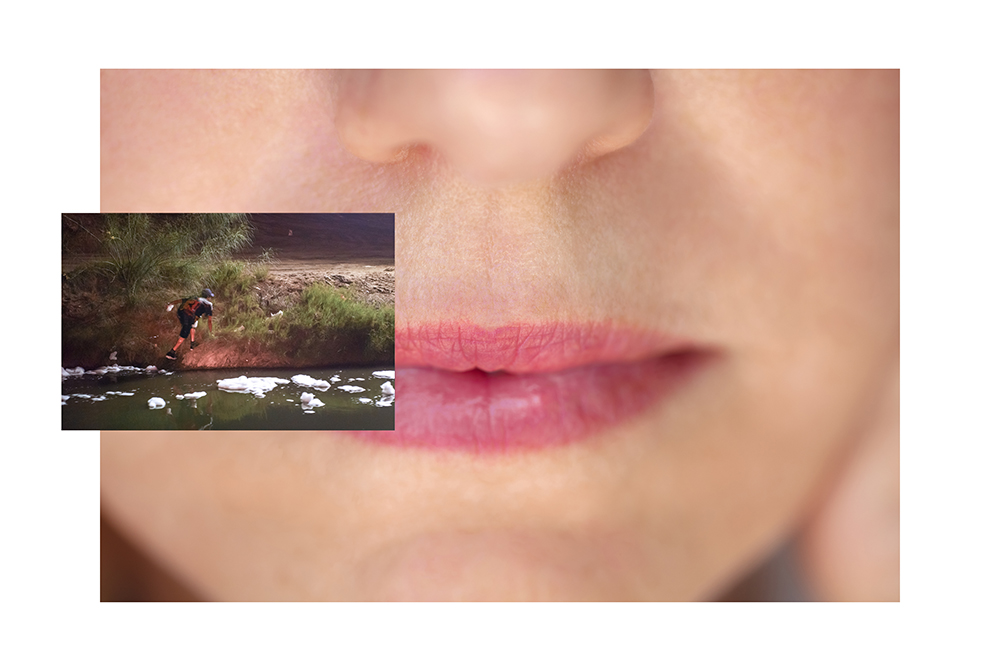 ©Ann Inger Johansson, Privileged IX, I didn’t have to sneak across the border.

A person, who has illegally passed in to the U.S., is allowed to walk back in to Mexico instead of swimming in the New River, the most polluted river in North America, in Calexico, Monday, March 21, 2005. 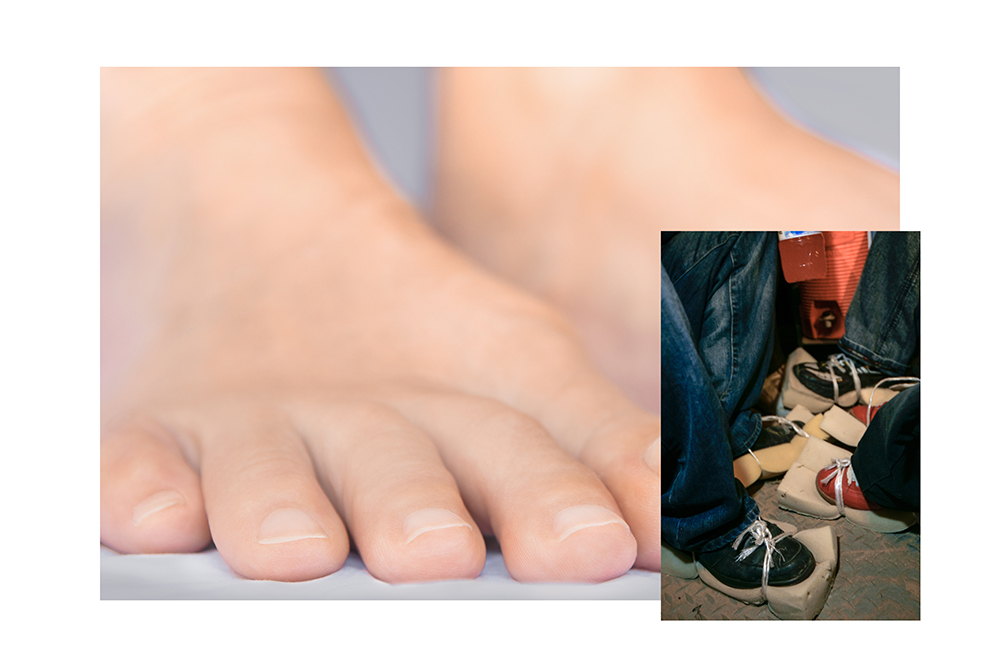 ©Ann Inger Johansson, Privileged X, I didn’t have to hide my tracks.

Men, who have just been caught crossing in to the United States illegally, sit in the back of a U.S. Border Patrol truck wearing foam under their shoes in order to disguise their tracks, along the U.S. – Mexico border near San Luis, Arizona, January 31, 2007. 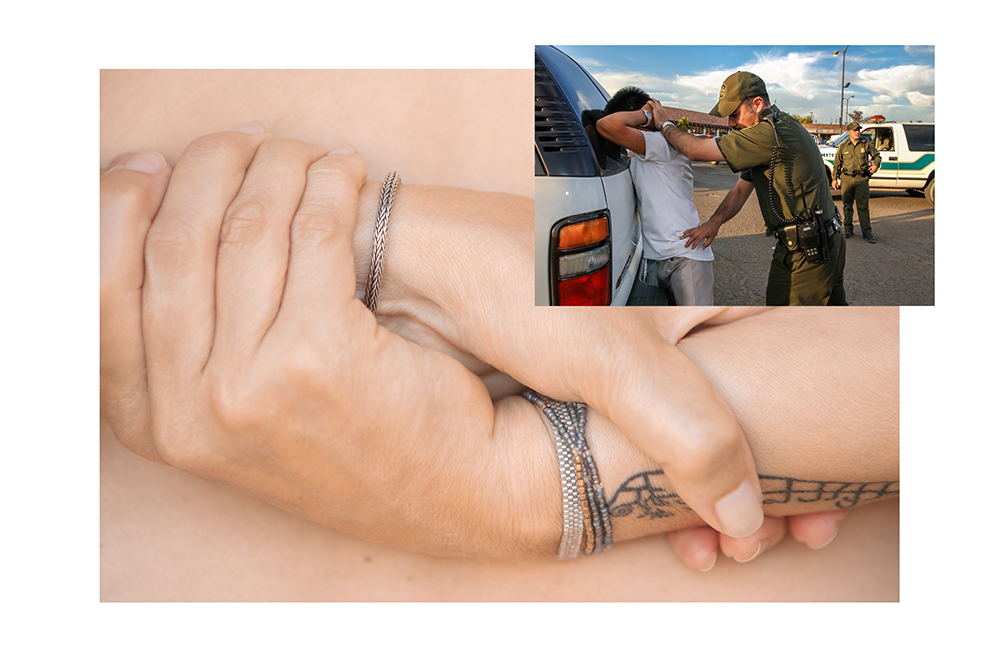 ©Ann Inger Johansson, Privileged XI, I have never been arrested. 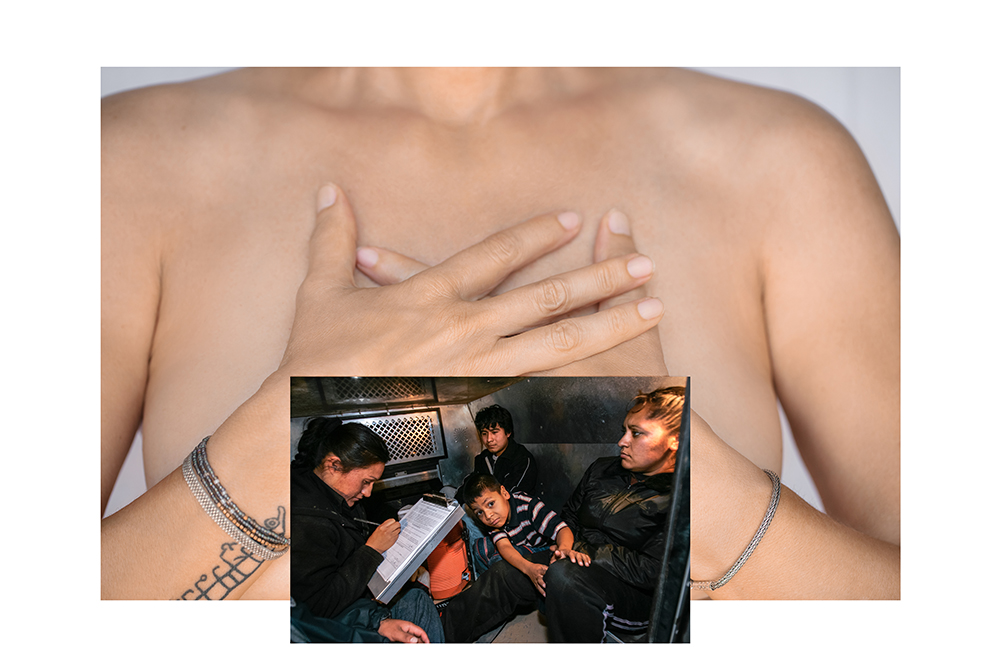 ©Ann Inger Johansson, Privileged XII, I have never feared for my family’s safety.

A young boy sits next to his mother while a woman fills out a paper in the back of a U.S. Border Patrol truck after they have been apprehended crossing in to the United States illegally, along the U.S. – Mexico border near San Luis, Arizona, January 31, 2007. 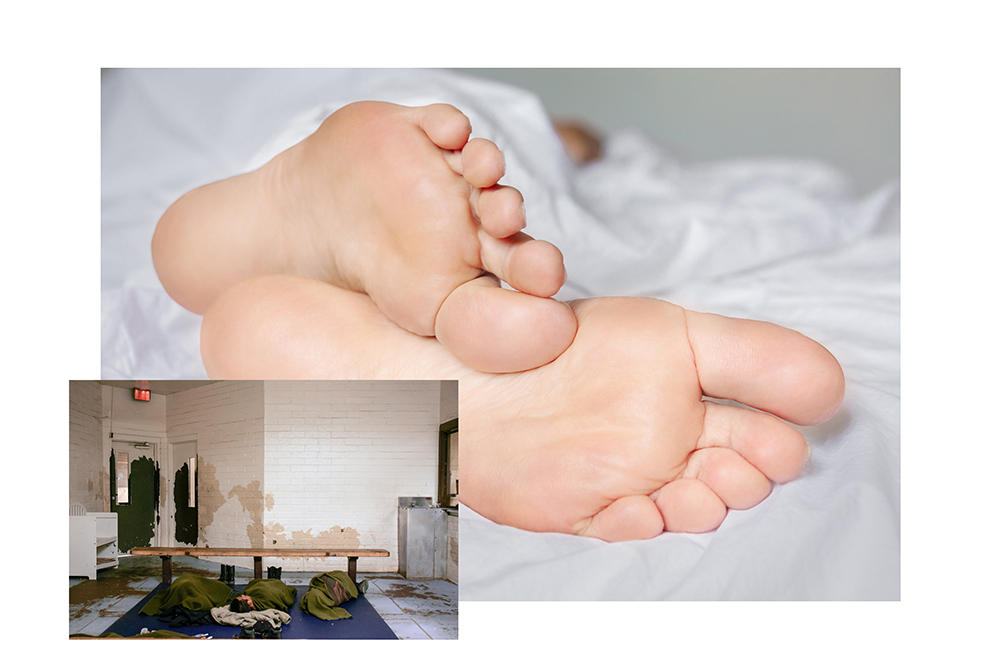 ©Ann Inger Johansson, Privileged XIII, I have never been detained.

People sleep in the holding room where families with minors are kept, at the U.S. Border Patrol’s Yuma Station, in Yuma, Arizona, January 31, 2007. 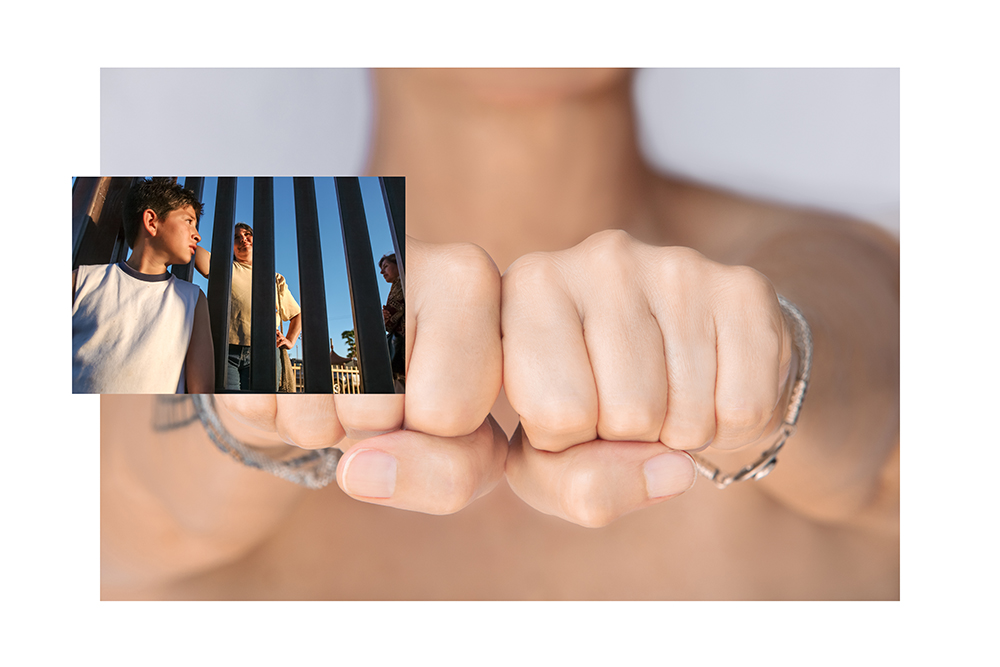 ©Ann Inger Johansson, Privileged XIV, I have never been separated from my family by force.

Juan Gonzalez, 12, left, pose for photographs with his mother Carmen as they speak with each other through the fence separating the U.S. and Mexico, in Calexico, Monday, March 21, 2005. 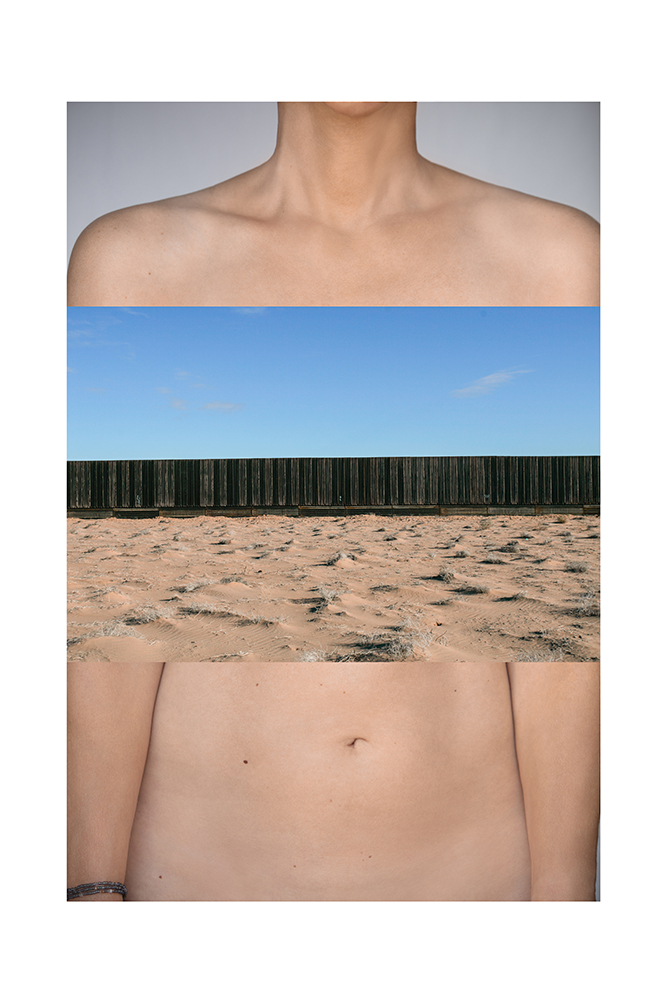 ©Ann Inger Johansson, Privileged XV, Privileged represents my personal experience as well as the current US administrations perceived sacredness of white United States of America and their desire to keep people who do not look like the privileged group out.