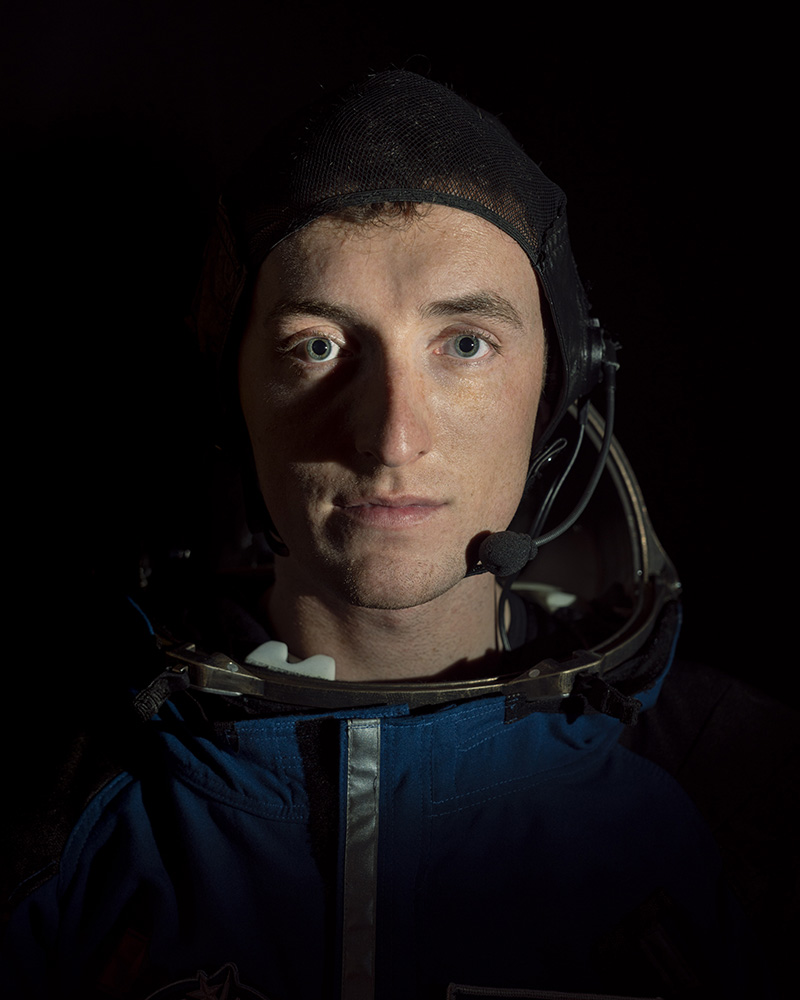 It is with pleasure that the jurors announce the 2022 Lenscratch Student Prize Honorable Mention Winner, Mackenzie Calle. Calle was selected for her project, The Gay Space Agency, and is currently attending the Documentary Photography and Visual Journalism program at the International Center of Photography. The Honorable Mention Winner receives: $250 Cash Award and a Lenscratch t-shirt and tote.

We are thrilled to share the 2022 Lenscratch Student Prize Honorable Mention Winner Mackenzie Calle. Calle recently completed the Documentary Photography and Visual Journalism program at the International Center of Photograph and she studied at NYU’s Tisch School of the Arts. Her project The Gay Space Agency interrogates NASA’s history and culture that left out LGBTQ+ people and actively repressed queer identifying astronauts from serving openly. Her multidimensional approach to this moment of history weaves together original cinematic photographs, archival material meant to reinforced heterosexuality at the space agency, and NASA’s more public facing archival images and ephemera. In the following Q&A, we explore the influences and motivations that inform her imagemaking practice. 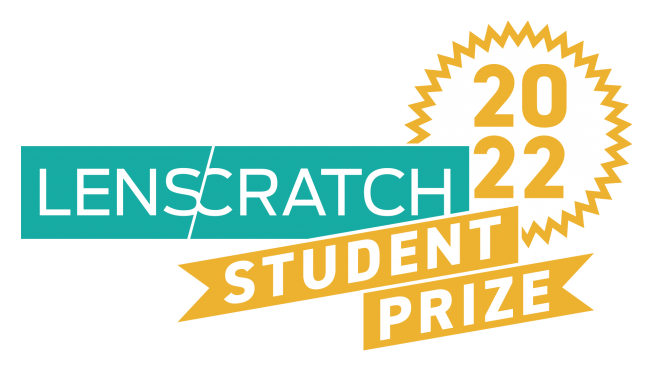 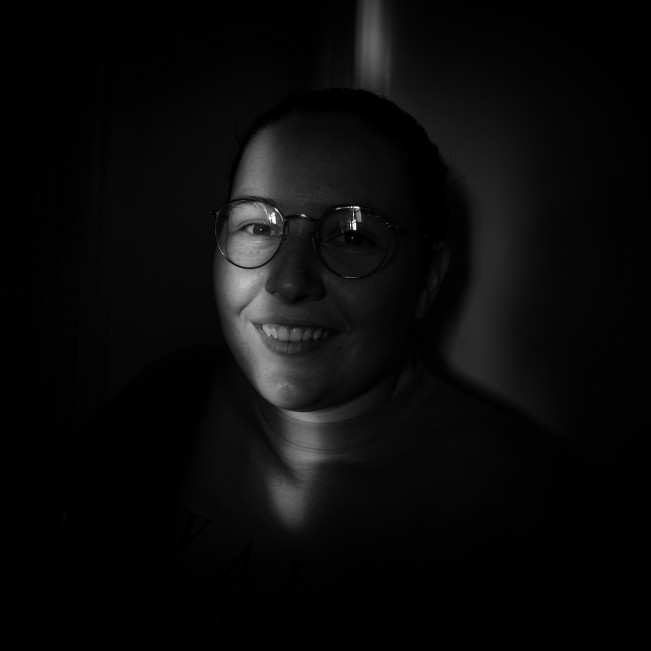 Mackenzie Calle is a documentary photographer from Southern California. She grew up as a basketball and volleyball player who was passionate about science and television. This led her to NYU’s Tisch School of the Arts where she majored in Cinema Studies and was a setter on the school’s volleyball team. For over five years she worked for NBCUniversal as a photo producer, editor, and photographer across networks including NBC, Bravo, MSNBC, CNBC, and NBC News.

In 2019 she was inspired by her experience as a closeted queer athlete and began photographing her still ongoing project, Trans Truth, which centers on transgender athletes across the United States. In 2021, she began The Gay Space Agency, which reckons with the history of NASA astronauts and the LGBTQ+ community.

Later in 2021 she was awarded the Director’s Fellowship to attend theDocumentary Photography and Visual Journalism program at the International Center of Photography. In 2022, she was named as a
Magnum Foundation grantee for The Gay Space Agency as a part of their Counter Histories initiative. She currently resides in Brooklyn, NY with her partner, Caitlin, and their cat, Biscuit. 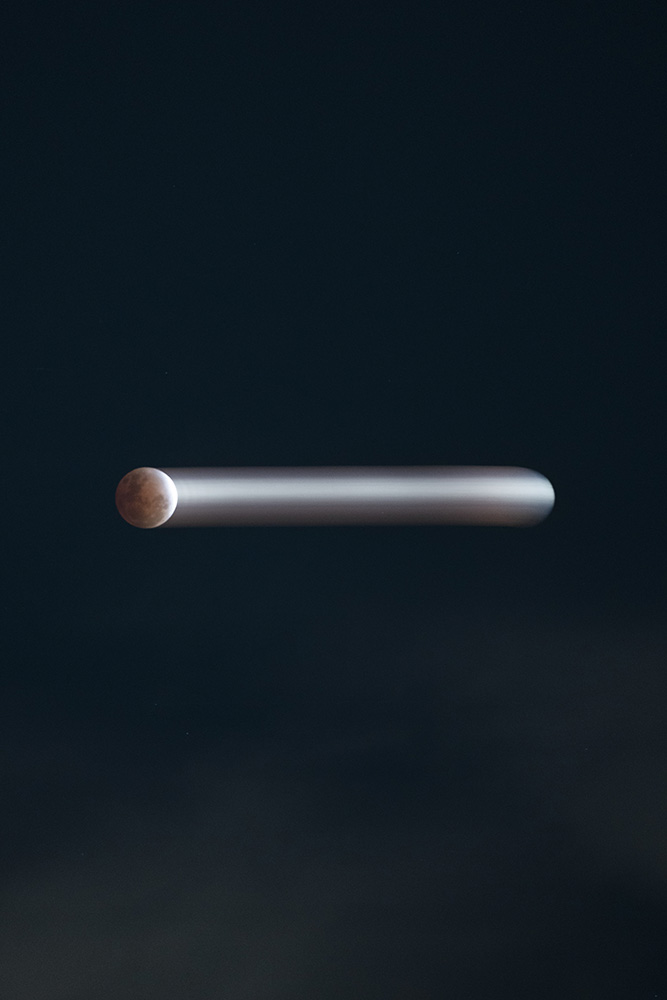 “When the inkblots came up, we looked at them and, sure enough, we’d always see some feminine anatomy in there to make sure that we gave the proper sexual response.” Jim Lovell, an astronaut in the Gemini and Apollo programs, recounts one of two mandatory heterosexuality tests that early NASA astronauts were required to take.

To date, 600 people have been astronauts. None have flown into space as an openly LGBTQ+ person. The Gay Space Agency confronts the American Space program’s historical exclusion of openly queer astronauts and asks what American heroism looks like and who might be a part of future exploration. Reckoning with this history, the project uses archival images, current images of the space program, and surreal boundary-breaking photos to reimagine a history which celebrates queerness and highlights LGBTQ+ role models.

In 1983, Sally Ride became not only the first American woman in space, but possibly the first ever out astronaut. However, this would not be known until 2012 when her obituary read, “Dr. Ride is survived by her partner of 27 years, Tam O’Shaughnessy.”

Today, NASA is joined by privately owned, billionaire-backed organizations in their exploration of the final frontier. As we revisit the possibilities of human expansion and future colonization, The Gay Space Agency asks what it means to have the “right stuff.” 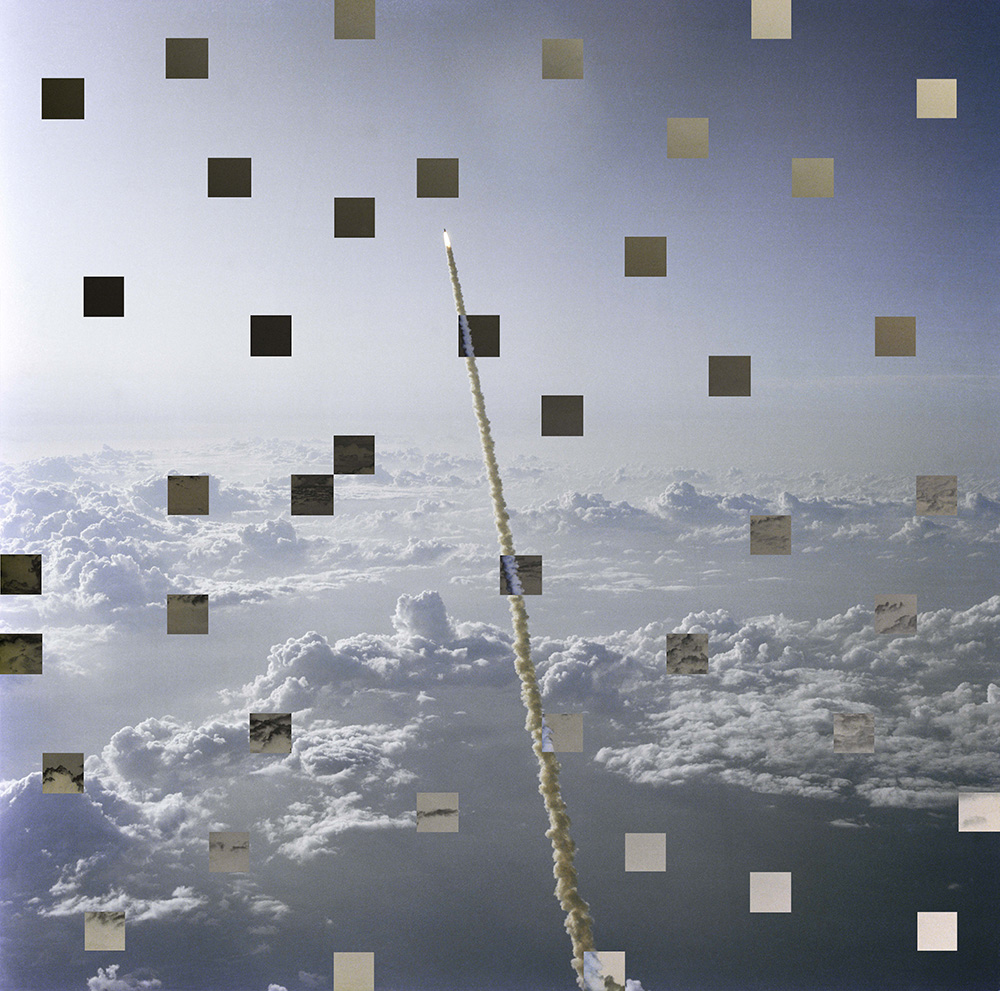 ©Mackenzie Calle, NASA image of the launch of STS-7 on June 18, 1983 from Kennedy Space Center, FL. Sally Ride was one of the five-member crew, making her the first American woman and known LGBTQ+ person in space. There have been over 600 trained astronauts and it is estimated that 7.1% of people in the U.S. are LGBTQ+. Based on this statistic, I created a grid of 600 squares and inverted 43 of them to represent the astronauts who should statistically be a part of the LGBTQ+ community.

Can you tell us about yourself and what brought you to photography?

I’ve always loved exploring, whether it’s for a fun find at a flea market or abandoned mining sites in the Sierra Nevada Mountains. This ultimately led me to photography, though my journey was a slower one. I was born and raised in Southern California before moving to New York for college and have lived there since.

In college, I was sure that I wanted to be a television showrunner. I took a few photography classes for fun, which spurred my interest in the medium, but I still didn’t consider actually being a photographer. And my photos were pretty terrible. Combining my interest in television and photography, I began my career as a photography producer at NBCUniversal where I worked for over five years on everything from news to Law and Order to the Real Housewives. While at NBC, my photography was strictly reserved for documenting my travels. However, after I took a class at ICP, I thought about it more seriously. A few years later, I was fortunate to attend the Documentary Practice &amp; Visual Journalism program there, where I just graduated from. 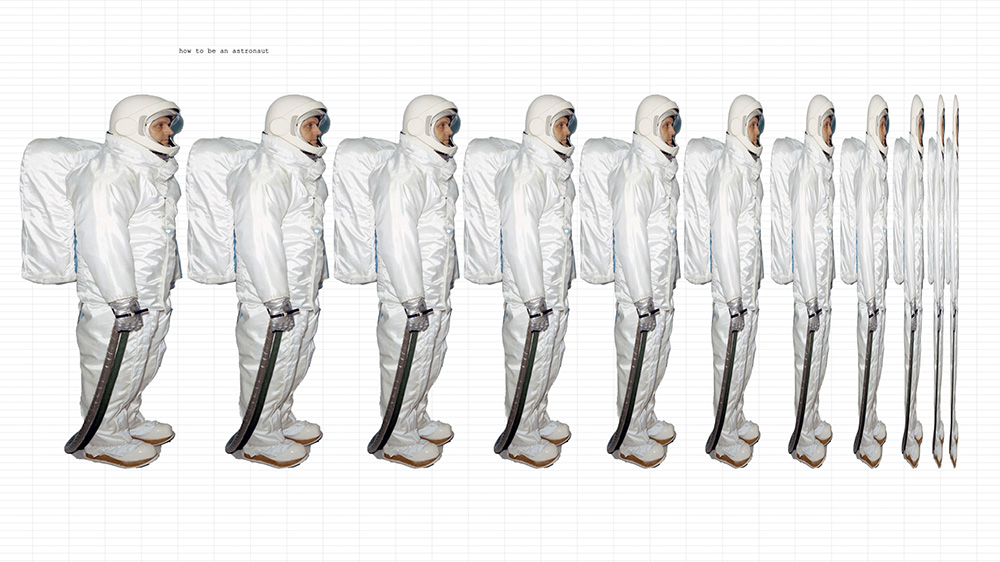 ©Mackenzie Calle, Conceptual image of the requirements to be an astronaut. Astronaut image is from NASA archive of a test subject for the Apollo spacesuit overcoat, May 18, 1965.

Your work uses archive materials and your own photographs to project us into the past, present and future all at once. What is the importance of playing on these different planes of time for your work?

Archival material is key to my practice because it is the literal representation of the past, and in my case, different phases of the space program. I’m especially interested in using archives to take another look, to question the histories we hold as absolute truths. Astronauts are seen as heroes in the U.S. They tend to be role models for young children, seen as the epitome of bravery, literally reaching for the stars. Growing up, I always looked up to Sally Ride, who was the first American female astronaut. I had a passionate interest in space, so she naturally was always an inspiration. As I learned more about the space program of our present, I became curious about the past. Generational stories have the power to deepen our understanding of ourselves and inform the future. Researching the beginnings of the space program felt like peeling back layers of the
present – especially regarding the exclusion of the LGBTQ+ community and how that has been perpetuated to modern day. The Lavender Scare, our close partnership in space with the USSR/Russia, the AIDS crisis, Don’t Ask Don’t Tell– the list of breadcrumbs goes on.

And so, looking at Sally Ride, she was the first American woman in space, shoved into the public eye. Yet, the world didn’t know that she had a female partner of 27 years until it was written in her obituary in 2012. When you look at photos of her or hear about her accomplishments, there will always be a question of what was her truth behind the image that the public was never aware of. Looking at images from her personal archive and seeing the hundreds of photos NASA has of her, it brings the past to the present for me and vice versa. 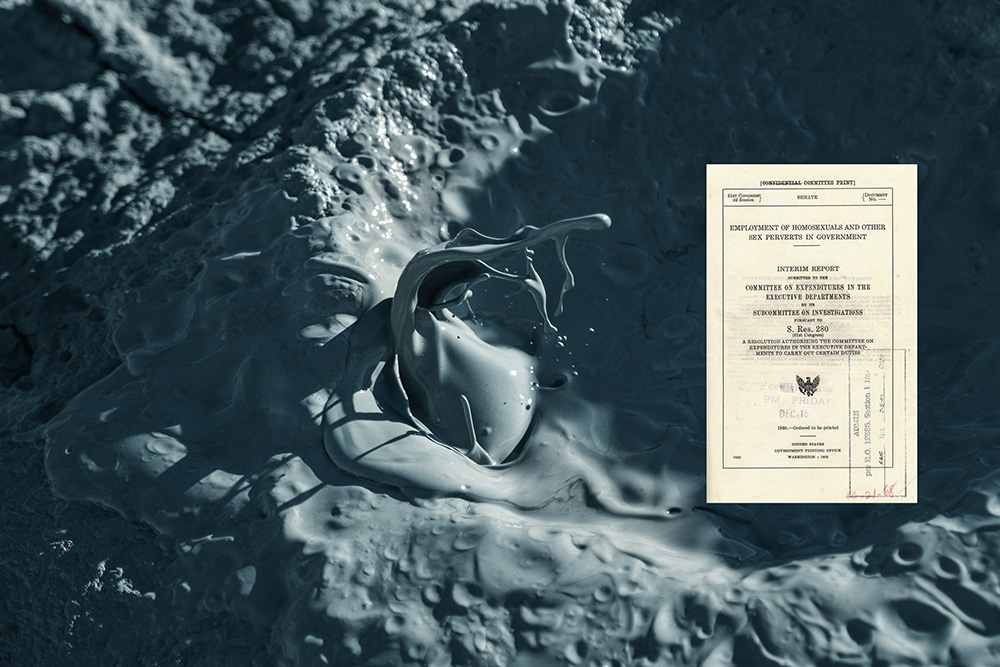 ©Mackenzie Calle, The top image is the cover of the 1950 Senate document that spurred the Lavender Scare, which saw almost 5,000 LGBTQ+ employees fired from the federal government. NASA was formed in 1958 and as a United States government agency, all employees would have been included under this order. The bottom image is a surreal landscape of the mud pots at the Salton Sea, CA, December 30, 2020.

What role has your background in television and and journalism influence your approach the work in The Gay Space Agency?

My background has a huge influence on the project! I have always been drawn to dramatic storytelling, especially in television. The desire to pursue photography and my initial interest in television production stemmed from a very similar place: the fascination with the visual. My own photography tends to have a surreal, cinematic feel that I almost fully attribute to this. The German series Dark especially has had a huge influence on the project in terms of storytelling that isn’t limited in chronology. The show begins in the present before expanding to
multiple generations of the past and future, simultaneously exploring separate timelines, sort of folding them in on each other. The only way to understand the series is to understand every era in their timeline. The show inspired me to go outside the linear and especially to consider how timelines aren’t so separate from each other. 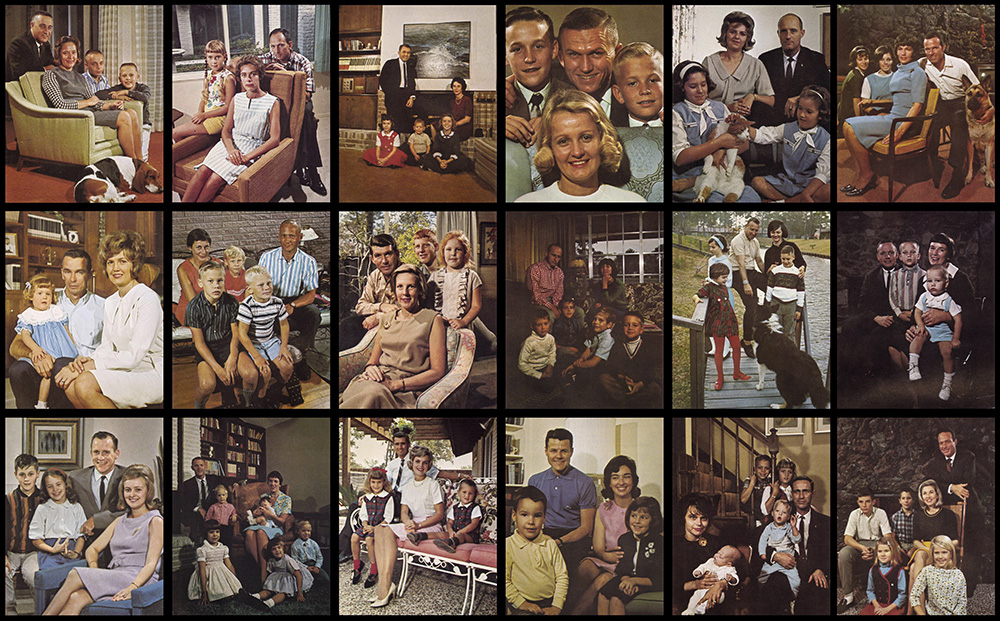 What do you think is the importance of science fiction as a storytelling form to telling stories about repressed groups of people?

With science fiction, there are endless storytelling possibilities. You can be limitless in your imagination. For The Gay Space Agency, I wanted it to be visually playful and other-worldly while also engaging in a serious analysis of the culture that represses the LGBTQ+ community in astronautics and aerospace. Also, science fiction historically sees characters overcoming unimaginable obstacles. The journey of a science fiction hero, maybe an outsider, someone who has to adjust to a different world– all those ideas are compatible with and allegorical to elements of the queer experience. Plus, it’s fun to engage in a science fiction perspective when creating a project about literal
astronauts. I have been working with the non-profit organization Out Astronaut and watching their training honestly feels like watching science fiction in real life! 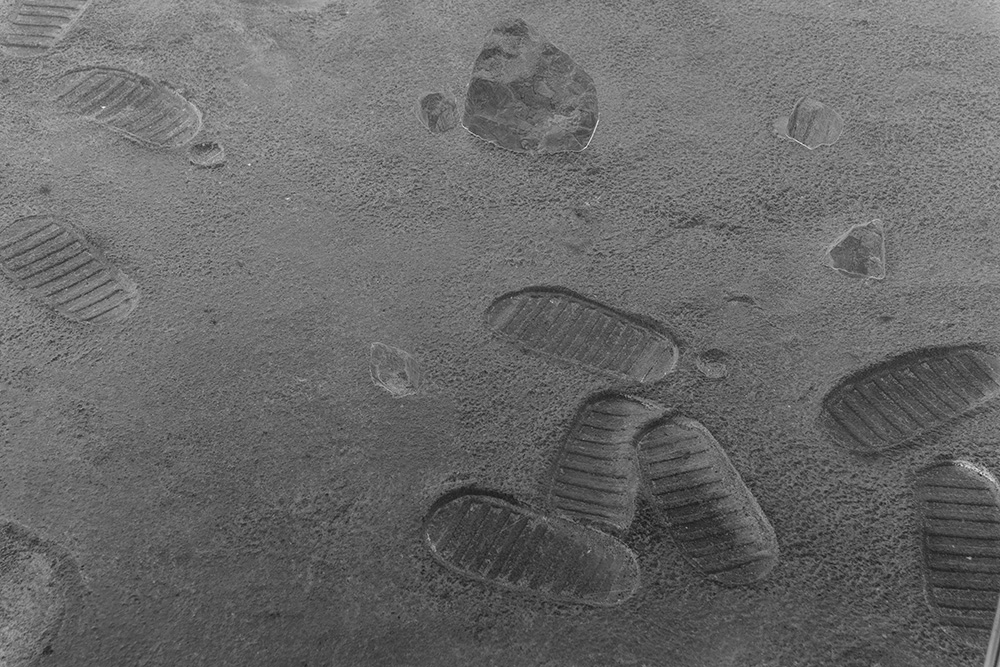 My experience at ICP, particularly with Karen Marshall, Andrew Lichtenstein, and Jon Henry, has meant everything. They helped shepherd this project from its infancy and I grew so much as a photographer under their guidance. Leaving a stable career to pursue photography was
definitely a leap of faith and I couldn’t be more grateful to my instructors. I also want to acknowledge my high school Art History teacher, Mrs. Quiros, who spurred my interest in the arts. It was during her class that I discovered Man Ray and Lee Miller, two photographers and
artists that have been some of my biggest influences.

I also need to mention Cristina de Middel’s incredible work on her photo project, The Afronauts. Those photos showed me new otherworldly heights that a photographer can explore, even from down on earth. Last but not least, a massive thank you to my partner and my family for being my endless supporters. 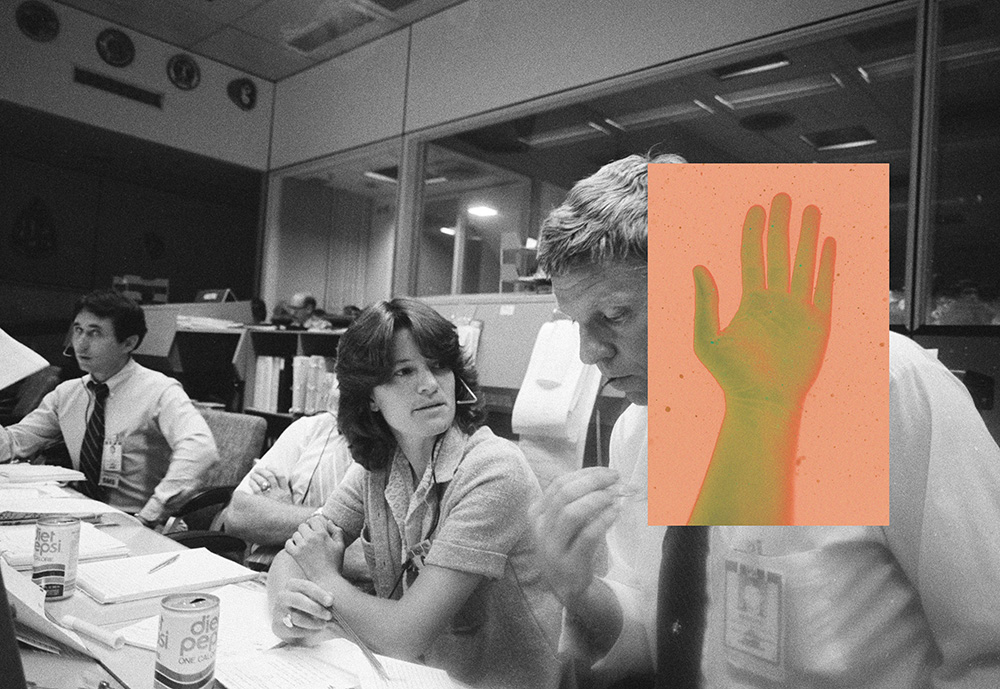 ©Mackenzie Calle, NASA image of Sally Ride seated at the capsule communicator console in the mission operations control room at Johnson Space Center, July 1981. She would communicate with the astronauts during the second Space Shuttle mission, STS-2. Sally was the first woman and out person to fill the role and in 1983 she became the first known out astronaut and first American woman in space. The image is overlaid with my surreal image of a hand, February 1, 2021. 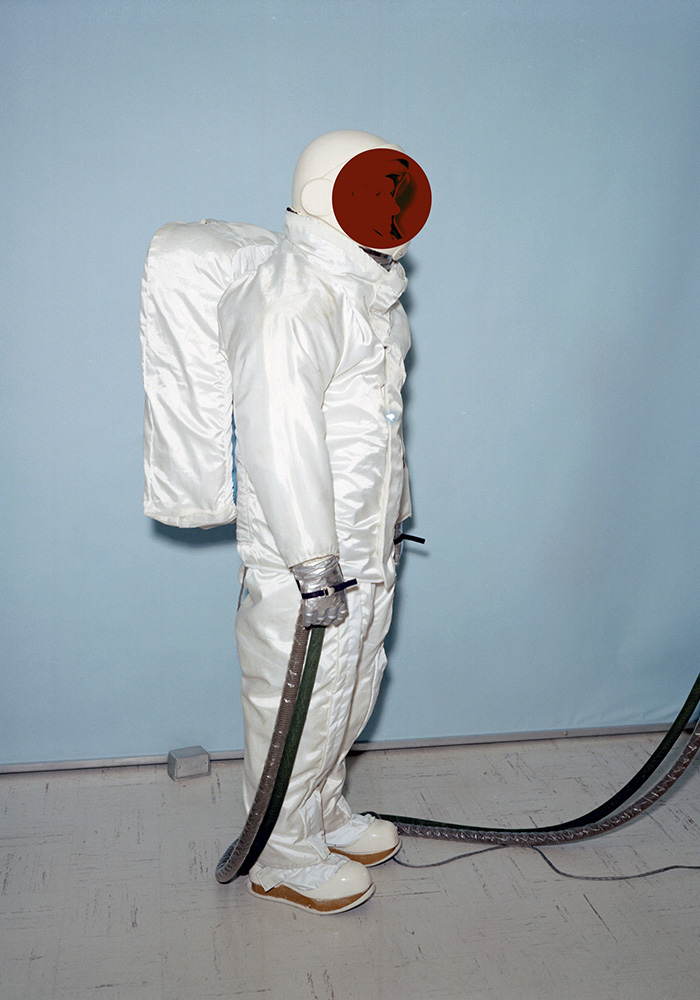 ©Mackenzie Calle, Manipulated NASA image of a spacesuit overgarment fitting at Johnson Space Center, which would be worn over the Apollo suits while astronauts were on the moon, May 18, 1965. 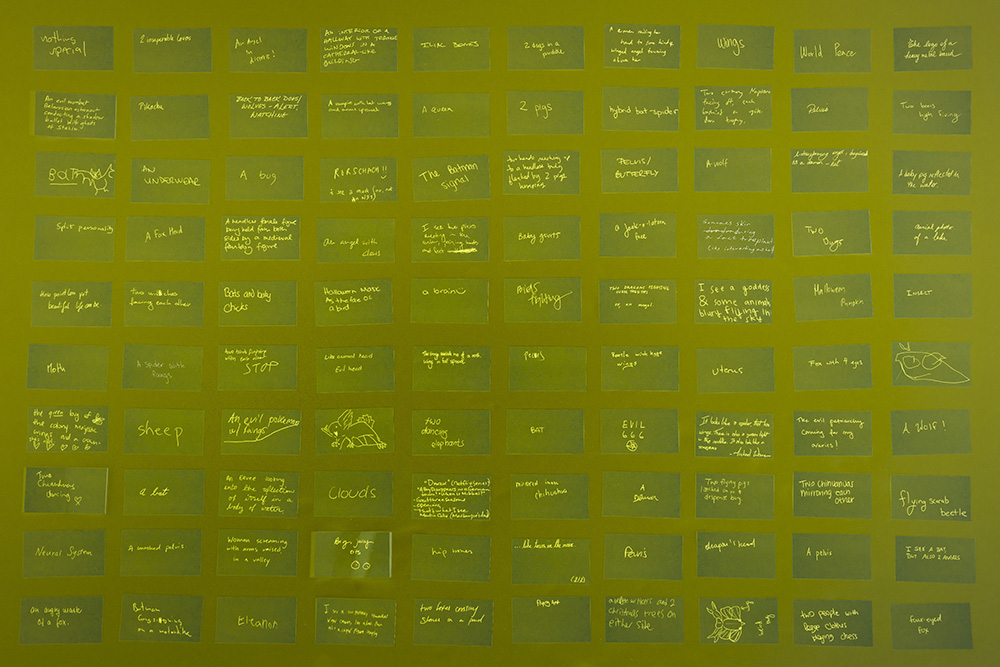 ©Mackenzie Calle, I gave 100 people a Rorschach ink blot and asked them what they saw. Early astronauts needed to see feminine anatomy in order to become an astronaut. Some of these people would have passed and most would not have. 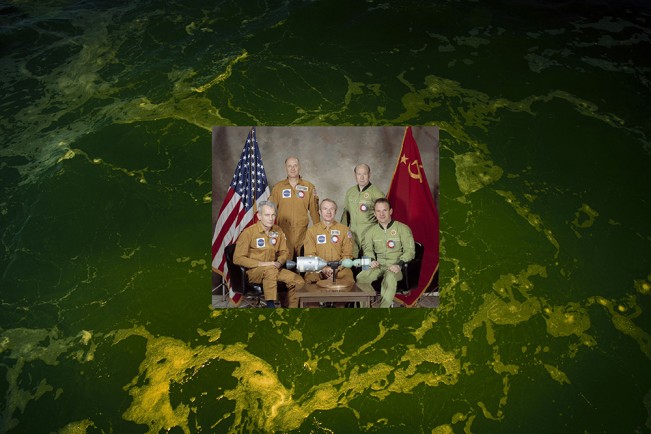 ©Mackenzie Calle, NASA image of the crews of the Apollo-Soyuz Test Project, March 1975. This was a joint operation between the Soviet Union and the United States, which signaled the end of the space race and marked the beginning of a decades long partnership between the U.S. and USSR/Russia, a nation known for its anti-LGBTQ+ stance. The image is on top of my surreal landscape photo of water, September 20, 2021. 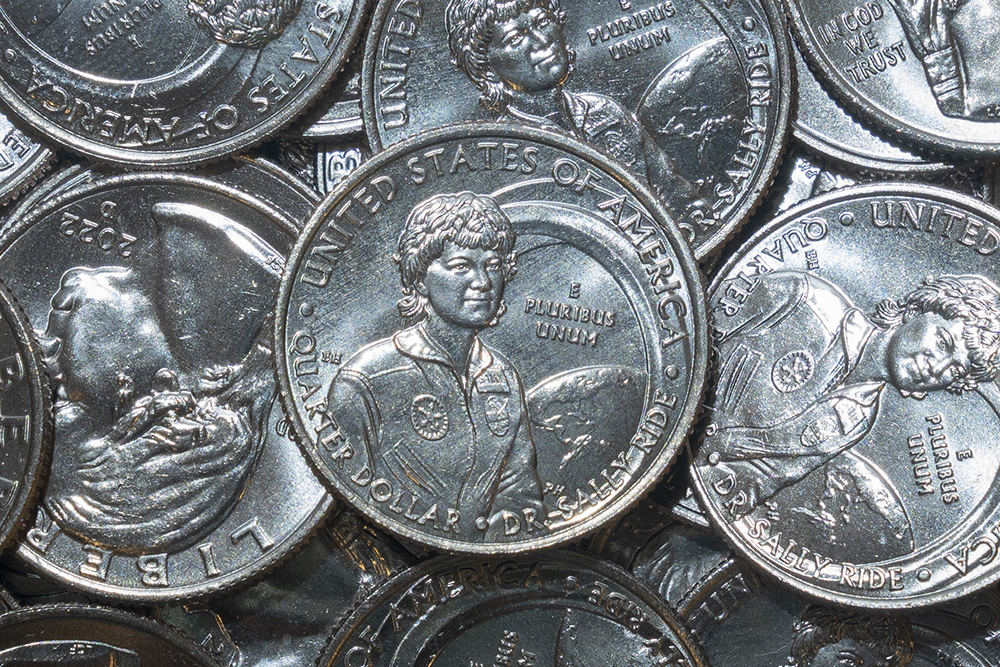 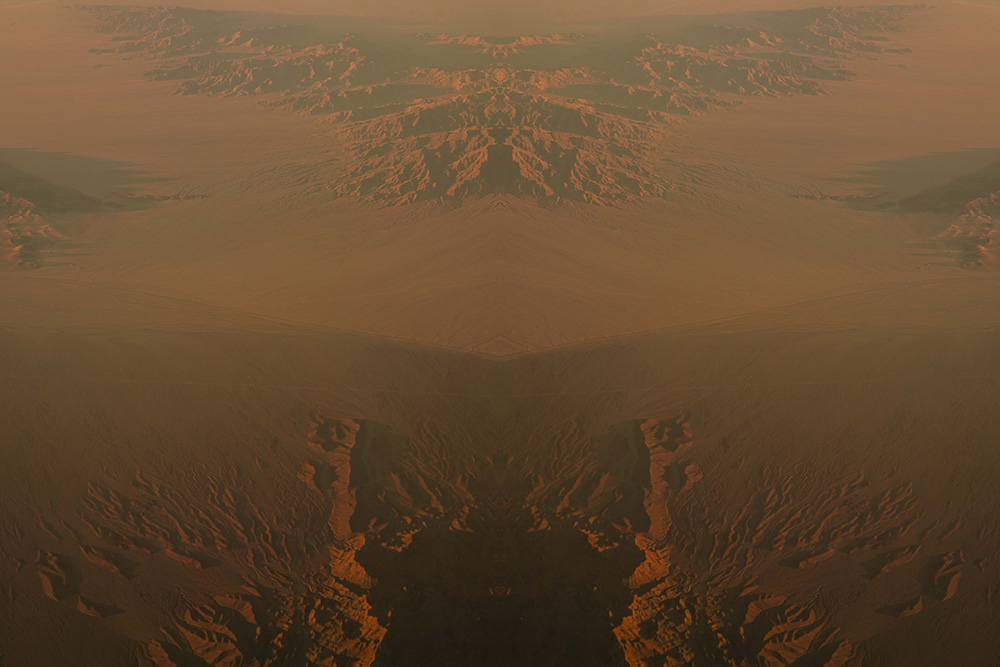 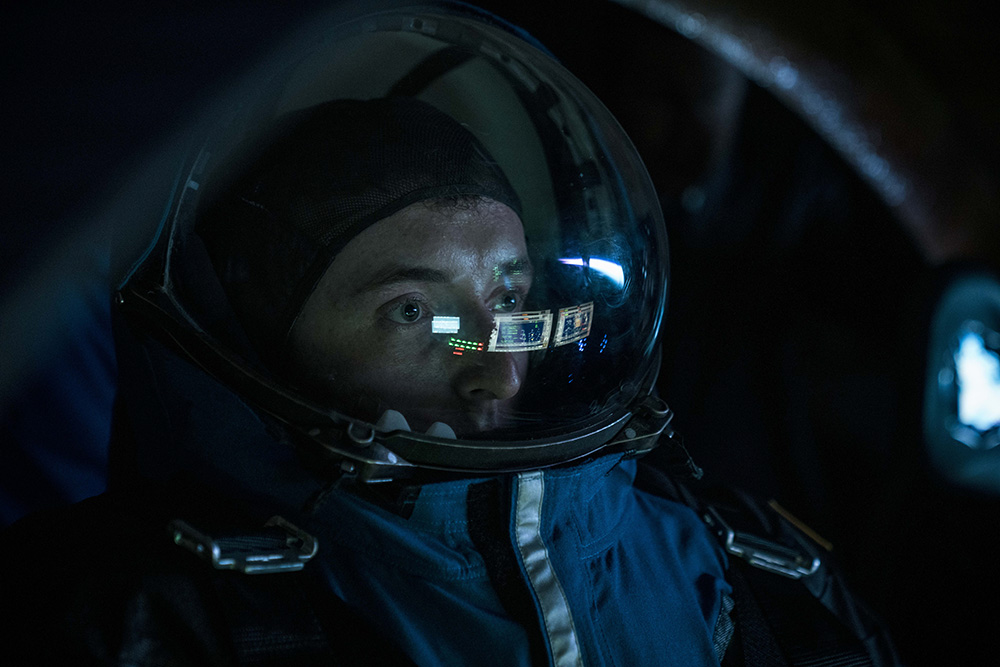 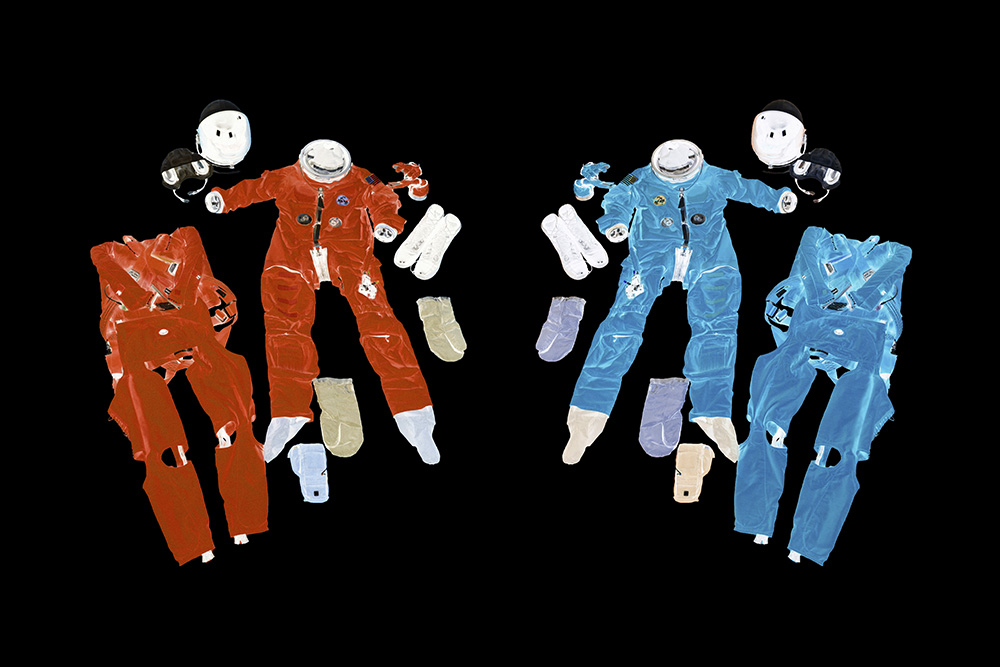 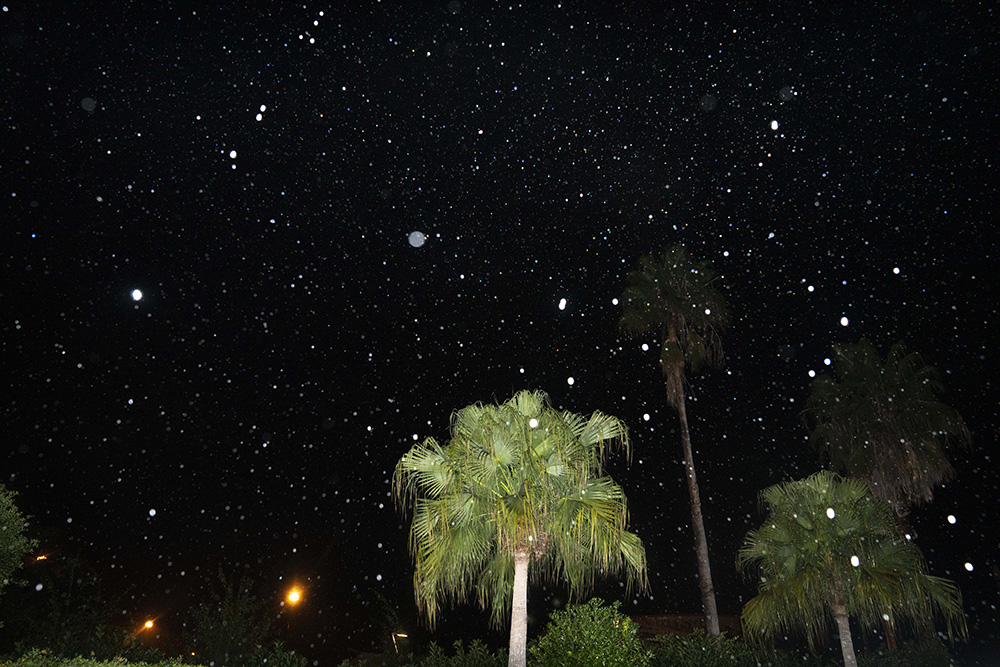