Tom Stone is not afraid to look at difficult subjects straight in the face. The opening image on his website is a testament to the that fact. 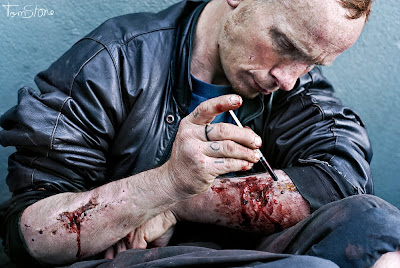 Tom was born outside Mexico City, and spent most of his childhood with his mother communally in Los Angeles’ famed Source Family; and after its dispersion, in various nomadic settings in Hawaii and California. A graduate of Harvard University with a degree in Computer Science, he worked in Silicon Valley for a number of years in investment banking and in the technology industry.

He is a documentary photographer known for his portraits of people living along the edges of society. His photography shares perspective with the work of Dorothea Lange, Richard Avedon, Diane Arbus and Sebastião Salgado.

His upcoming exhibition at the DNJ Gallery in Los Angeles opens with a sneak preview on November 6-9th. (Immediately following will be an exhibition by William Eggleston running through January 29th.)

I photograph people who skirt the edges of things; people whose connection to the broader flow is murky or obscured. Mistaken as less or different than they are; they aren’t really seen and don’t really belong. That is everyone sometimes, but for some it is more often. I try to establish a line for a moment. I hope to connect and through this I see the most beautiful and heartbreaking things. To my thinking, the original human trauma is our separation. We are too close not to need each other and too far to trust each other.

We rely on dubious senses and clever devices to interact, but we are alone in our thoughts. Lonely, insecure and uncertain, we pair, we group and we associate. We try to belong and we seek to exclude at the same time. We form bonds by geography, religion, economy and otherwise but it is all-precarious.

We come together, we drive apart and we climb our ladder. We step away from those who don’t belong and help those who do. We are connected rung by rung – though less and less – as we push and pull. But some do not climb and below the earth is littered with them. They fit too poorly. They stand apart. They stand without   and what of them, these ones who don’t belong or who are excluded, who don’t fit or don’t try? Is there nothing they value? Is there nothing of them we value? I count this as a measure of our ignorance: the depth of poverty in the world. It’s a glaring marker to how far we have not come, yet it has also driven our advance on less fortunate backs and against less fortunate fate.

But is there really no connection there? Does such fate – whether choice or circumstance – speak nothing of us? Tell me we do more than advance in place with so many left behind, or promise me we can do better. Say we can reflect ourselves: us and them so that we can see the ways we overlap and distinguish the ways we grow apart and pledge that we can learn to fit all of our misshapes, to reward value beyond charity and beyond the marketplace, to be better to each other, to be better ourselves, and promise me it could be a better world or tell me we are at our best.

Being There, Child in Poverty, San Francisco

NEXT | Nancy Baron >
< MIGRATION, Lost and Found in America | PREV