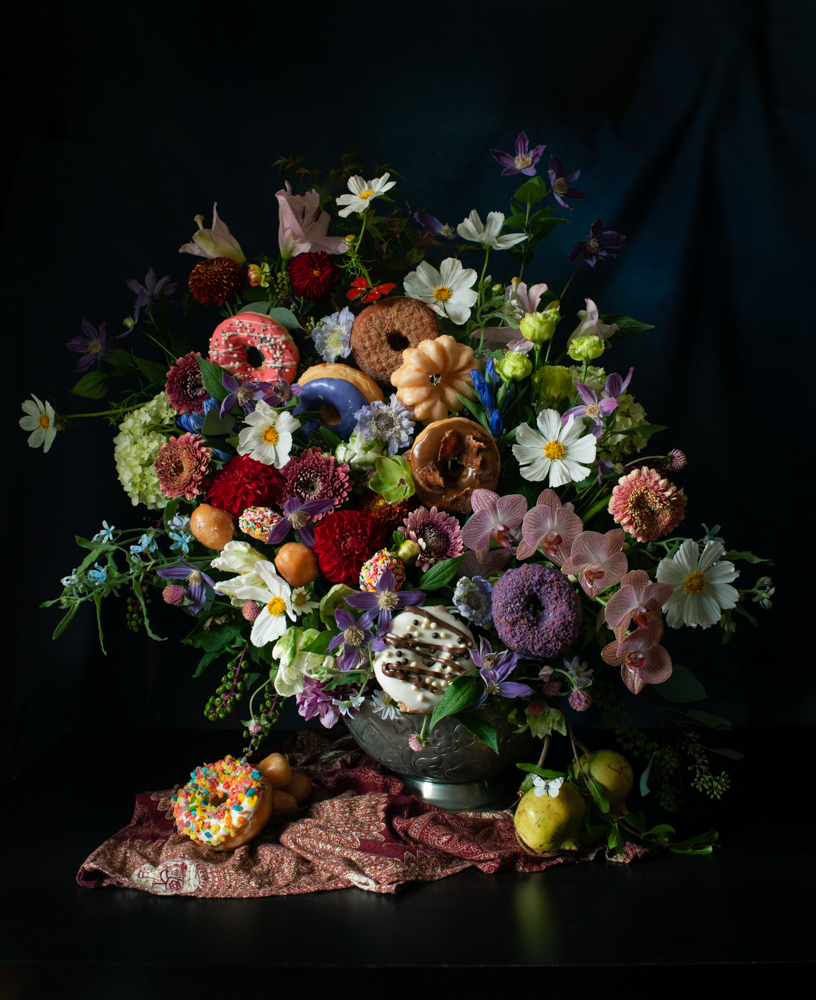 Brueghel’s Breakfast was inspired by Mayly Tao, second generation Cambodian American and purveyor of incredibly joyful rings of fried dough (via her family’s donut shop, DK’s Donuts & Bakery). I wanted to combine the exuberance of eating a donut with that of Brueghel’s bursting florals, as an homage to cross-sensory experiences that make us happy. (2020)

I had the great pleasure of recently meeting fellow Angeleno Stephanie Shih at CENTER’s Review Santa Fe. Her evocative still lifes are once striking and layered with personal meaning. Shih reinvents the Eurocentric approach to combining objects with her own Asian sensibilities and cultural histories, using the constructions to tell personal stories of immigration, religion, food, and aesthetics. The artist states, “This on-going series seeks to claim space in the “still life” tradition by infusing the practice with Asian American cultural experiences, both from my own upbringing as well as by working with Asian American small business owners and creators.”

Stephanie Shih is a still life photographer, known for her painterly use of shadow applied to playful perspectives on food. Shih started making photographs with her dad’s half-frame camera on childhood road trips, but only took up photography seriously later in life while in graduate school studying cognitive science and computational linguistics. At the time, she moonlighted as a wedding cake maker, and translating the experience of food fantasies to the visual image has been a driving throughline of her work ever since.

As a second generation Taiwanese-Chinese American, Shih’s recent work explores themes of cultural dynamics—acceptance, alienation, appropriation, celebration, beauty—through her still life photographers. Shih’s photography has been featured in print outlets including Elle Girl Korea, 7×7, and Gastronomica, and online on Gourmet Live, Bon Appetit, Saveur, and Fine Cooking. Her prints are held in private collections in the US, Australia, and Europe.

Shih is from the San Francisco Bay Area and currently lives in Los Angeles, California. When not in the studio or kitchen creating, she is a professor of Linguistics at University of Southern California. Follow Stephanie on Instagram: @thisisshih 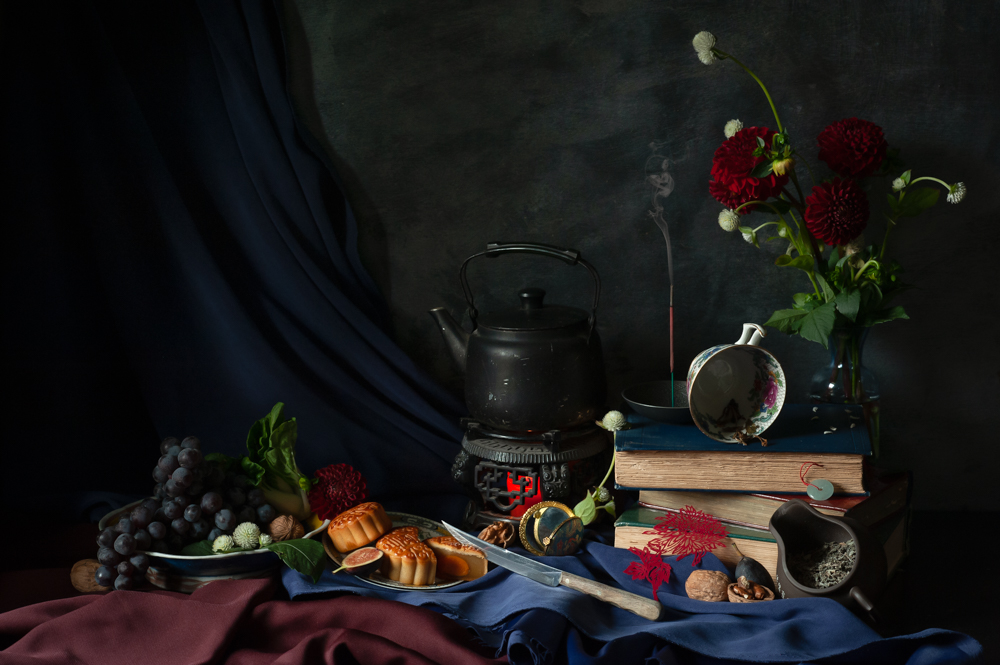 The Midautumn Festival celebrates harvest, longevity, and friends and family. Created in the middle of 2020 and six months into quarantine, this piece examines the midautumn themes through the lens of a year marked by separation, loss, and grief. The folk history of mooncakes, gifted and eaten during the festival, notes their crucial role in overthrowing the Mongul occupation: may they continue to remind us of the power of grassroots protest. (2020)

The Eurocentric art tradition of still life has a long history of appropriating elements from cultures that it considered “exotic” while maintaining authoritative artistic dominance on the practice. In response, Asian American Still Life is an on-going project that claims space in this venerated tradition for Asian American cultural experiences, directly from an Asian American perspective. The project creates an overdue dialogue between the symbology of Eurocentric still life style with that of Asian and Asian diaspora traditions. At their core, European still lifes are preoccupied with themes examining the human condition: life, death, vice, artifice, belonging. These themes are by no means unique to Europe, and parallels emerge in my own Asian American cultural history: austerity in Confucianism, the cyclicity of life in Buddhism, the limits of assimilation in the US. 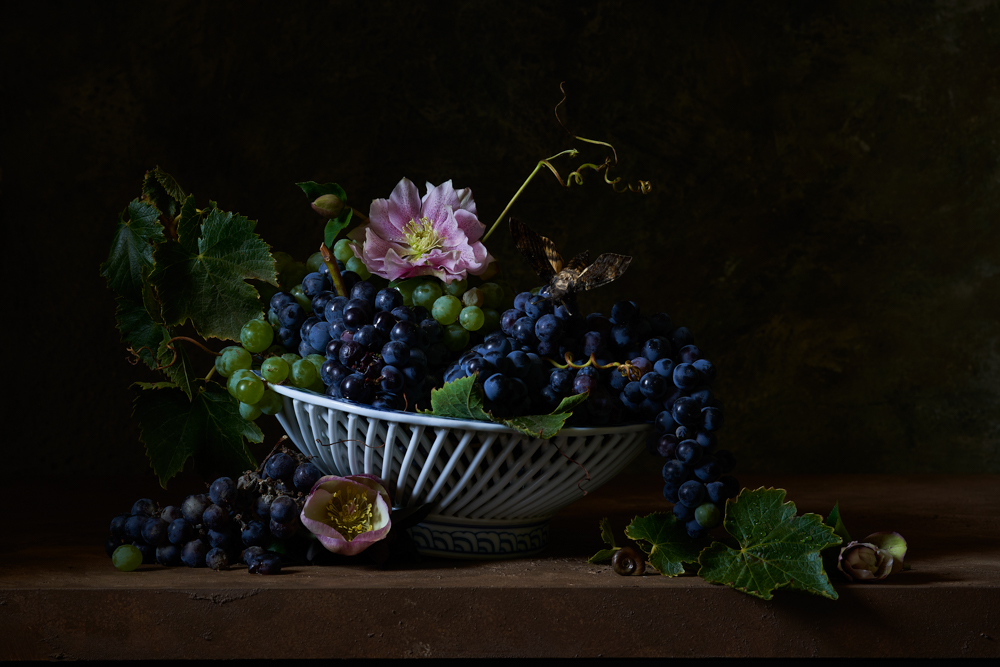 Each still life is carefully constructed in the studio using a rich tableau of food, found objects, and thematic flora and fauna, with nuanced yet colorful outbursts that upend the Protestant seriousness of the Dutch still lifes that the images mimic. On a personal level, the series features familiar home comfort foods from my own upbringing as a Taiwanese-Chinese American­—foods that are derided as “strange” in the United States but hold quotidian significance in Chinese culture. At the same time, the series questions the ideals of the nostalgic “All-American” experience as a daughter of immigrants, asking to what extent an immigrant experience can dovetail with notions of Americanness. On a community level, I partner with Asian American small business owners, chefs, and agriculturists throughout the series, foregrounding their food practices that make up the now multicultural culinary landscape that pervades California. These partnerships have allowed me to present perspectives and lived experiences from the numerous cultures and countries that feed the otherwise monolithic label of “Asian American.” 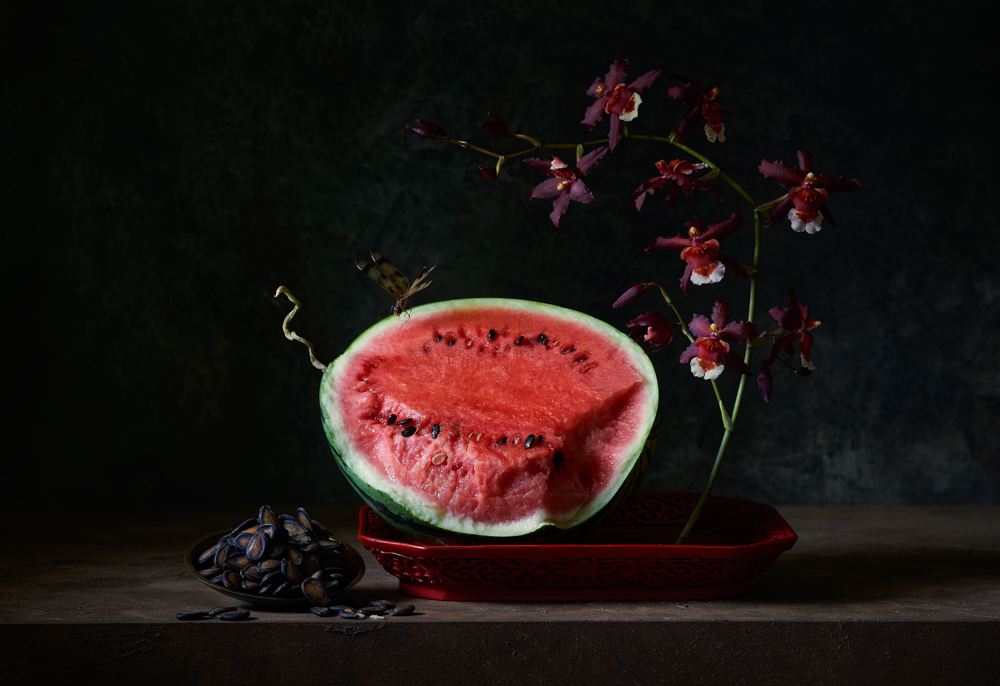 Watermelons were another of my dad’s favorite fruits. After dinner during the summers, he would pull a giant watermelon out of the fridge and proceed to expertly carve it into cubes that were too large for anyone’s mouth but his. My mom and I would watch him fill up the special watermelon tupperware bucket, while complaining vocally about the size of the cubes and cracking open spiced watermelon seeds, which my dad despised. (2021) 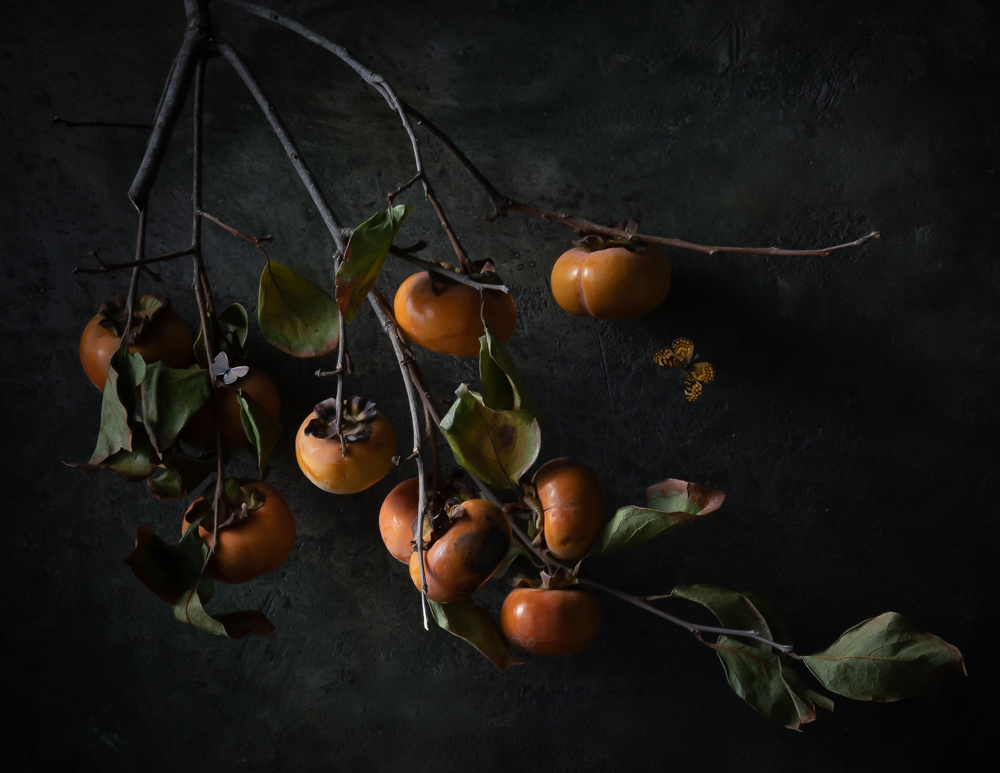 Persimmons were my dad’s favorite fruit, but one not so commonly seen in suburban American markets during my childhood. So my dad would order a giant box directly from a grower each year, and keep them in our unused brick chimney to eat over the course of several weeks. (2020) 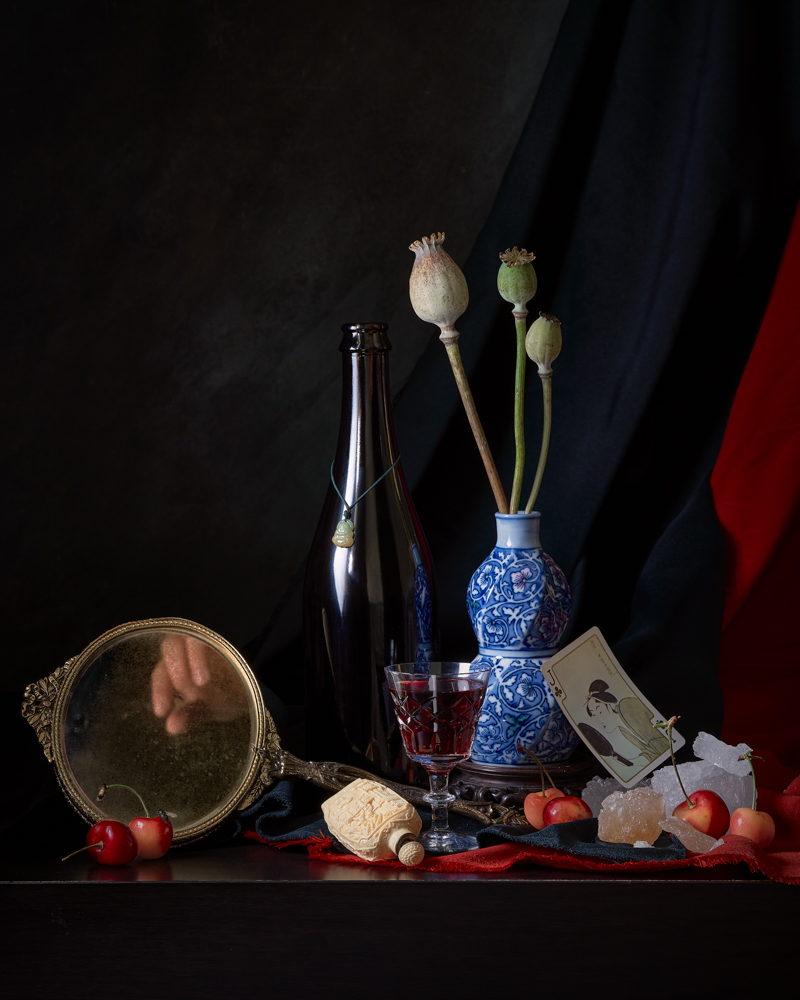 A response to the still life vanitas tradition, this is a tableau of addictions–historical, contemporary, and perpetual–from poppies to (my personal vice) sugar. (2021) 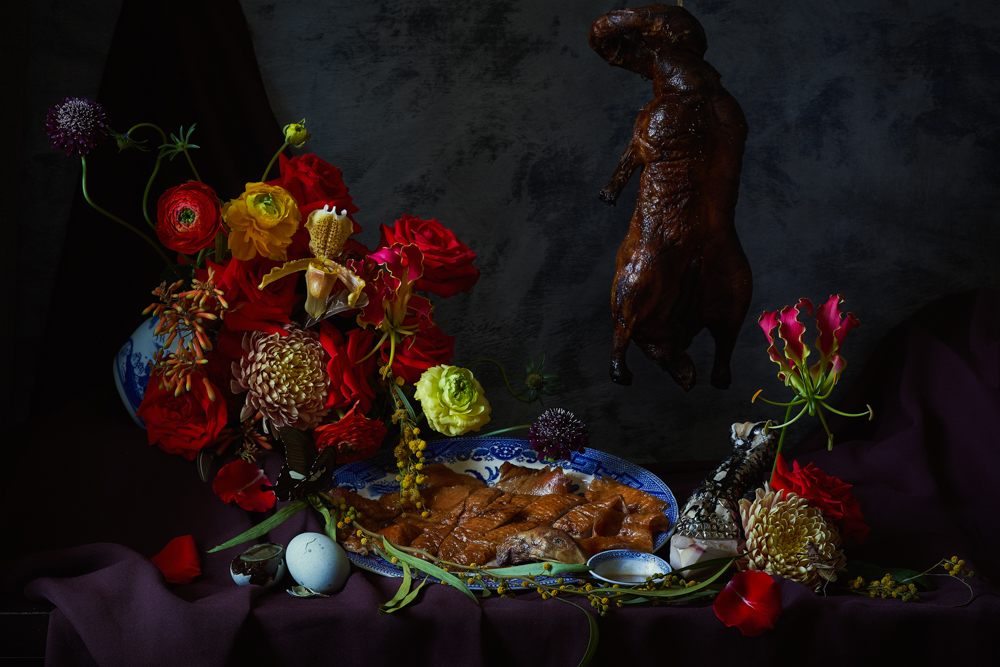 A symbol of celebratory feasts in Chinese cuisines, a duck is judged most by the quality of its skin. This work features local LA staples: Cantonese roast duck from Sam Woo BBQ and peking duck from Moonhouse. Protector bone club by Lucien Shapiro. (2021) 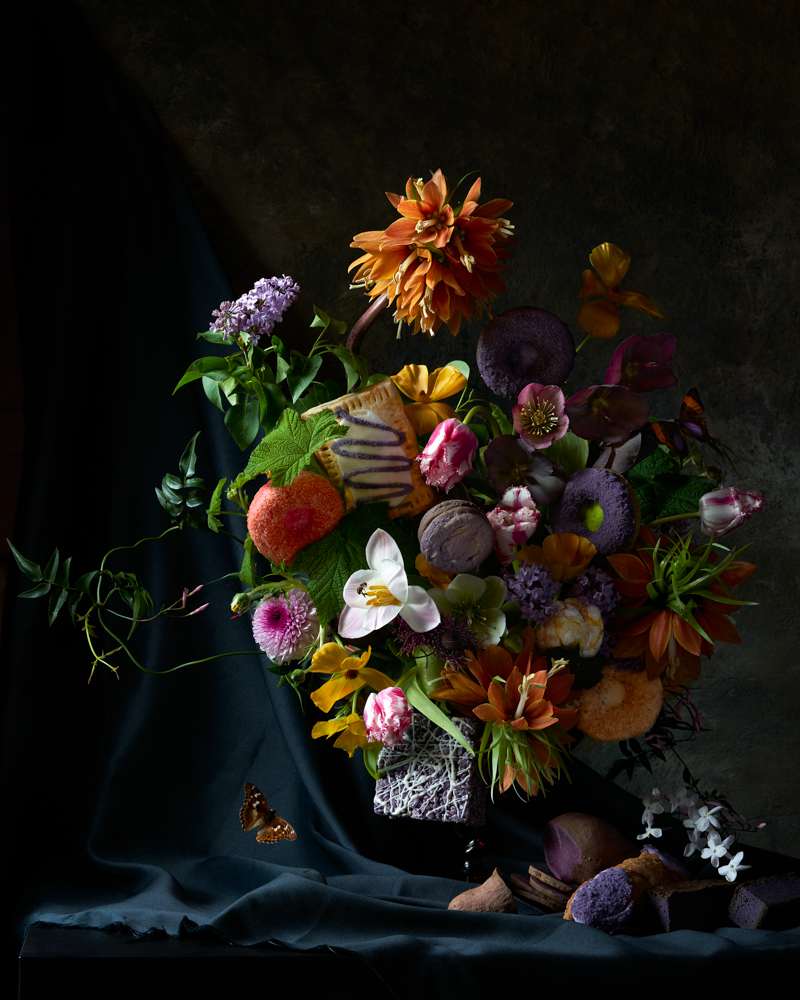 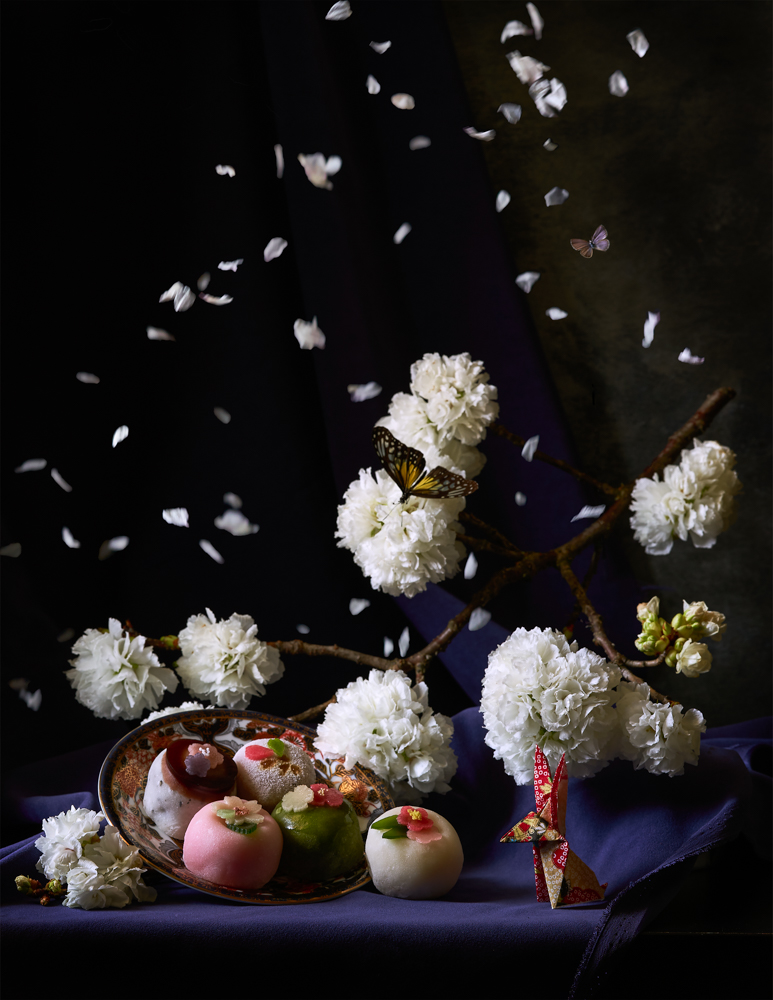 This work features handmade mochi from Chikara Mochi, in Gardena. (2021) 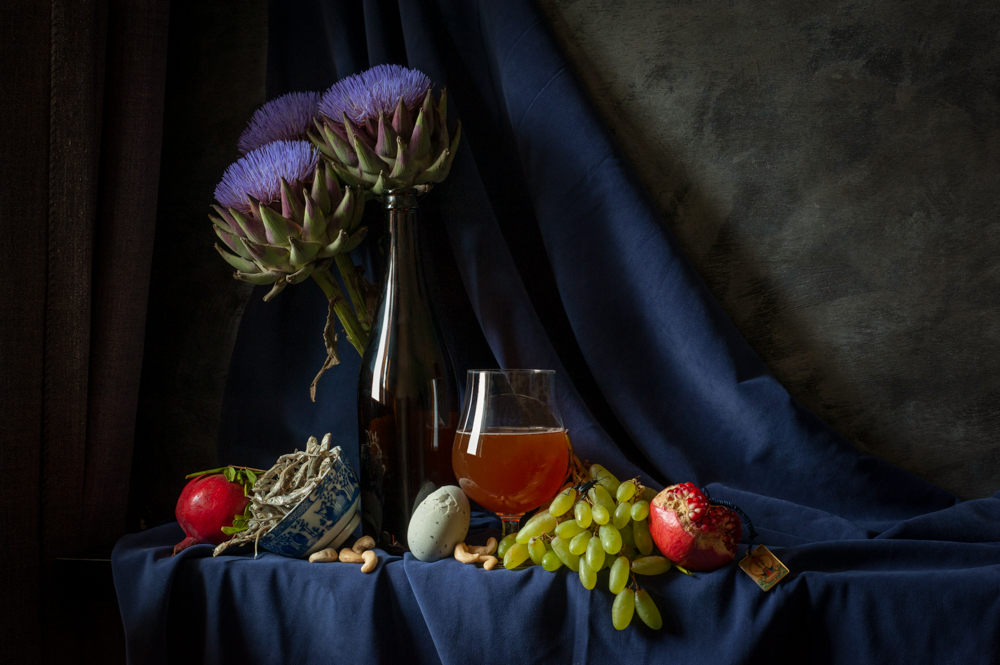 A too-familiar experience for Asian Americans is to have everyday items in their pantries exoticized and then used to ostracize: dried fish is considered “stinky”, the black-fleshed century eggs are judged “gross” or “rubbery”. But for those of us who grow up with these items, they represent the comforting familiarity of a part of our cultures. (2020) 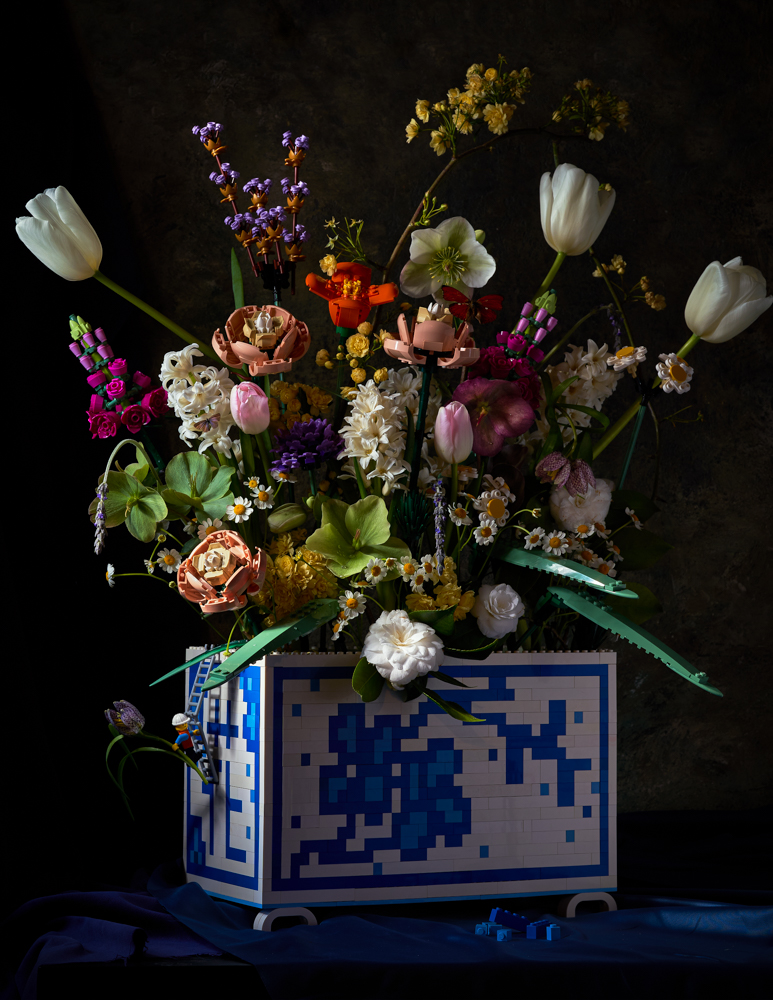 Delftware in the Dutch tradition imitated Chinese pottery, often evoking scenes of East Asian life to decorate their ornate but curiously-shaped tulipiere vases (coinciding with tulipmania). One such shape was the rectangular flower brick, which subsequently fell out of popularity. Here, I rebuilt this particular style of tulipiere vase, brick by Lego brick. (2021) 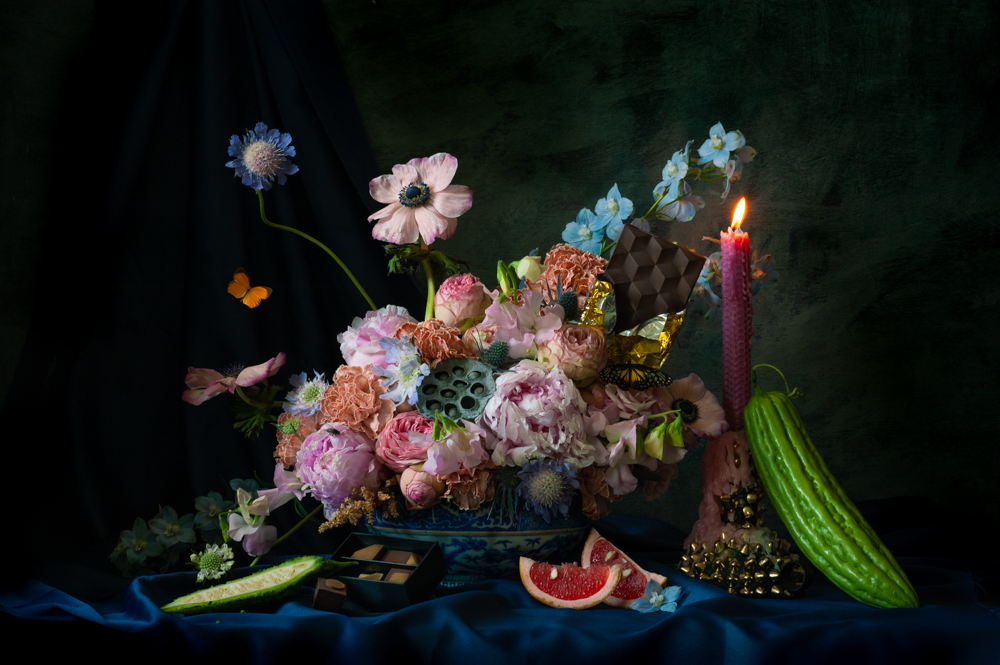 The Chinese adage “to eat bitter” means that one must suffer through hard work and hardships in order to achieve and grow. While it’s a notion that’s often abused in “tiger parenting” culture, it is still useful as a reminder from time to time: except, my Chinese-American take on the phrase is to “eat bittersweet”, remembering the sweet moments that exist alongside the struggles. This work features chocolates from Milla Chocolates, and candlestick by Lucien Shapiro. (2020)