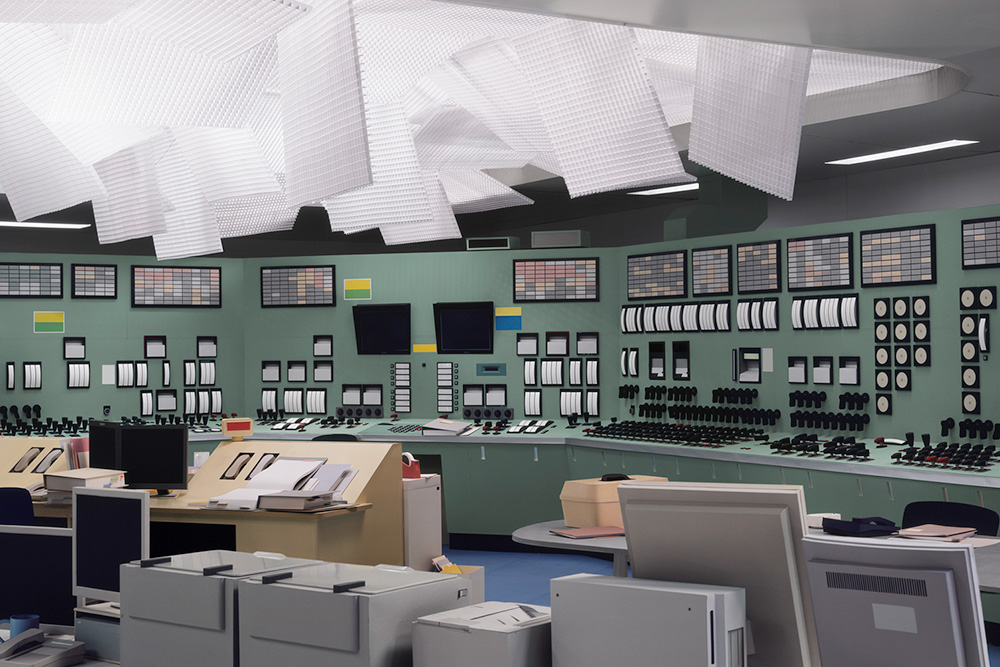 I am sharing an interview that photographer and blogger,  Ken Weingart conducted with Thomas Demand. Ken has been producing interviews for his Art and Photography blog, and he has kindly offered to share a few with the Lenscratch audience over the next months.

Originally trained as a sculptor, the German-born photographer Thomas Demand builds life-size models of architectural interiors out of paper and cardboard. Often culled from the media or the pages of history, the faithful facsimiles range from representing Hitler’s underground bunker to Jackson Pollock’s studio in Long Island. Ultimately, these elaborate works are short-lived; the artist destroys the reproduction after photographing them. Conceptual in nature, these photographs are three times removed from the original scenes of history, evoking a sense of the uncanny. In recent years, Demand has turned to taking saturated cellphone photographs of everyday objects (bathroom tiles, paper cups wedged in fence chains, a bar of soap), again estranging viewers from the familiar and mundane.

Demand has had solo exhibitions at Kunsthaus Bregenz in Austria, the Museum of Modern Art in New York, the Neue Nationalgalerie at the Kulturforum in Berlin, the Serpentine Gallery in London, the Irish Museum of Modern Art in Dublin, the Fondazione Prada in Italy, and the Fondation Cartier pour l’Art Contemporain in France. In 2004, Demand represented Germany at the Bienal de São Paulo in Brazil. He has also participated in the Gwangju Biennale, Shanghai Biennale, Venice Biennale, Sydney Biennale, and Carnegie International.

Ken had the opportunity recently to ask Thomas about the thoughts and processes that go into making his art and photos.

When did you start being a sculpturist? What were the early influences and inspirations?

Funny word: sculpturist. I painted and did drawing which, I believed came too easy to me. To make it more complicated or to get ground under my wheels, I started making small objects, which were rather modest in ambition and scale. I was at least sure they were mine, and not looking like someone else’s art.

Would you say you are a sculpturist or a photographer?

I am a sculptor who employs media. But I would also say, that I defy these definitions, if it wouldn’t sound so very pompous. When being asked these questions, I always try to imagine situations in real life where you’d be asked to define yourself in such categories, and all I can come up with is the immigration officer checking on me.

How did you come up with the idea of creating big sculptures and then photographing them, and then destroying them? Had anyone else done this? Would you say this was an original execution, and would you say it’s what you are most known for?

I am sure zillions of people have done this before me, and we all stand on someone else’s shoulders, but I did not know this at the time. This wasn’t born out of an ‘eureka!’ moment, but simply out of necessities and the consequences of my work being fragile, and the temporary nature of it. I did not want to become the slave of my own past in terms of storage and conservation.

Do you sometimes wish you had kept some of the work you destroyed? You could do both no? Take the photo and keep the sculpture?

I could, but then again where to put them? Also, is it really about the rabbit in David Copperfield’s hat? But, for the curious mind: there is one sculpture now permanently installed at Fondazione Prada in Milan; it’s the grotto, in full scale.

Your recreation of the Oval Office — porcelain plates, the metal base of a lamp, the chair upholstery, the shaggy rug, this is all created with cardboard and paper? How do you achieve this?

When did you learn photography and how? What do you like about photography?

I taught myself, it’s not that difficult. It’s a great mutual agreement between author and audience; that’s the best aspect in my eyes, as the technology changes.

Your choice of cameras has been 4×5 large format? Where did your learn it, and how difficult was it?

I learned by doing, but it’s the 8 x 10 now, it used to be 13 x 18 cm (roughly 5 x 7), which is a perfect format, of course, except it’s the one which went out of business first. But I do use a digital camera as well, if I need to. I am pretty un-dogmatic about it, but it does make a difference, which I try to reflect in the image.

How do you come up with your ideas of what to build?

Do you ever miss not photographing people?

No, there are enough people being obsessed with that. If anything, I miss people.

Who are some of your favorite fine art photographers and artists?

How long have you been in Berlin and how do you like it?

I am usually not in Berlin; we moved five years ago to Los Angeles. But it seems to survive without me, so it is apparently rather healthy! It’s a great town for people who want to start over, change perspective, reinvent themselves, and not fall off the grid. Also, it’s still reasonably affordable, and not everything is immolated to greed and commerce. It has room for resistance.

How much of the year do you stay in the U.S., and how do you like the U.S. vs. Germany?

Last year I spent sixty-three days in Germany, of which eighteen were in Berlin, and the rest in Hamburg, where I teach.

Did you always know you would be an artist? If not, when, and how did the idea come?

Well, I couldn’t think of anything else, but I was aware of the unlikeliness of this happening. The second half of that book isn’t written yet, so who knows.

How important is having a political statement or purpose in the art?

It’s a sign of intelligence, and I like intelligence. Other people find it overrated, those usually don’t vote.

When did you start making films, and what is the thought process that goes into film versus a print shoot?

If I can make a still image, which transports the same idea, I don’t make a film of it.

What camera are you shooting your film with?

Still cameras, if they are animations, otherwise 35mm.

How do you like being a Getty scholar? How did this come about and what do you do for the Getty?

I didn’t do anything. They asked me if I would like to come and I said yes within five minutes. It’s a great place for academics, and to be the fool on the hill (the artist) may spice it up for them. It’s the closest I ever came to being an employee in terms of rules and bureaucracy, though, I own them a lot. One thing I have gained is an appreciation of Kafka as a documentarist.

You are a professor of art in Hamburg. What do your classes consist of and what do you impart to the students?

I teach sculpture class. I tell them what I think about their efforts, and they listen and make their own sense of it.

The environments you create, often have a political and historical context and meaning. Is there a unifying theme to the works, and do they usually have a political statement? Have you always had a fascination with history?

No, it’s not about history, it’s about memory and how we share mediated experiences to construct our identities with images. History is one part of it, but not all.

In the current exhibition Perfect Likeness at the Hammer Museum at UCLA, you mentioned the ubiquity of cameras. Is this affecting your art or motivations?

No, but it shadows our experience of reality. I said this fifteen years ago, not knowing how prophetic that would be. It’s hard to find someone who doesn’t make photographs. They start to interpret life to us, which is a tautological circle and I wonder how long you can feed yourself with yourself.

What do you think of Los Angeles, and how does the city affect your work and life?

It’s nice and interesting. I would say I could grow old here. You don’t realize how time goes by, so I guess I got old here already.

Does the art world (prices of art and the success or non-success of artists) seem sensical or often absurd?

Compare it with the value of other things and it’s not that absurd – absurd is that everyone including you – Cannot think of art without mentioning money sooner or later.

Do you have any long terms goals? Do you care how you are remembered, and if so, how would you like to be remembered?

I would like to be remembered, yes, but I am fully aware that every name in art history is written with a pencil, not a chisel.

How did you meet the Matthew Marks gallery?

Many of my favorite artists are showing there and I always had the feeling this is the place where the art is handled with the most integrity.

And as far as galleries go, do you have any advice for aspiring artists? Would you tell them it’s hard to make a living as an artist? Do you care about that?

I really have no very new advice for the young artist. Just don’t show too early. The first show is still something very special. Also, don’t speculate what other people might like. It’s more likely that you won’t have the success you think you deserve, and then you end up with work you don’t even feel was worth sacrificing for all the other options you had. And don’t throw stuff out you aren’t sure of, as it will be the first thing to come back to you. If you don’t find it essential, no one else will.

In The Dailies, your subject matter is more common or mundane than with previous works. Can it get tiring, or be a burden to make political art?

No, but like an opera singer, you may want to try out singing Schubert at some point even if you grew up on Wagner. Or taken in a different way, I don’t want to write novels every day; a short story here and there, maybe a haiku keeps me alert. But also, as I said, mediated imagery is much more than news and the history department, and that’s the landscape I want to paint.

For one of your recent projects, you had a dozen or so animators working full days for three months. How expensive is that and is it difficult to afford?

Do you listen to music or use it for inspiration while you make your work or do you create in silence? If you do use or listen to music who are some of your favorite artists?