This past November, I was invited, along with thirty photographers, to exhibit work at the Lishui International Photo Festival in China. Unfortunately, I was unable to attend the festivities, but was incredibly grateful for the visual feedback from my fellow photographers. Douglas Ethridge has stepped up to the Lenscratch plate and is willing to share some of his experiences. This will be a two-part post. Thank you, Doug, for your insights and images!

On the photo trail to Lishui by Douglas Ethridge

In late November, I had the opportunity to exhibit work from my series “Selective Memories” at the Lishui International Photo Festival in Lishui, China. 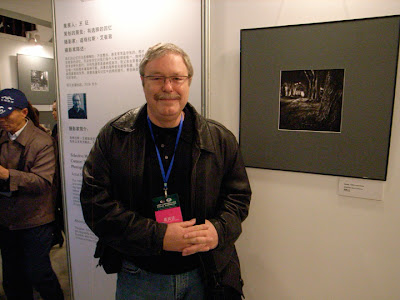 The Chinese curator Wang Zheng invited a group of 30 overseas photographers and 20 curators- in total more than 60 photographers were exhibited in addition to a like number of Chinese photographers. It was an honor to be there, and fascinating to see so much good work exhibited in such a beautiful setting.

David Ellingsen, a photographer from Vancouver, has done such a great job of describing the festival on his blog, that there’s no point in duplicating his efforts.

So instead, I decided to share some random moments and thoughts from along the way as I traveled from Shanghai to Lishui to Hangzhou and back to Shanghai.

Scooters are everywhere in Shanghai, and indeed all over China. I saw this particular model a couple of times, always driven by some hip-looking dude.

Ballroom dancing seems to be all the rage. Here in Shanghai’s Fuxing Park, there were at least three groups of dancers, close by, each with their own sound system.

Construction seems to be at full speed ahead in China. Right alongside massive cranes are workers pushing carts by hand with every manner of materials on board.

These guys were hanging out on the back of a parked bike, goofing with passers-by. Even in a remote small town, check out the driver’s stylin hair cut and leathers.

Life in general seems to be a team sport in China, and so perhaps it’s no wonder that photographers seem to run in packs.

Grinding a sword at a traditional factory.

Skinning bamboo in a small village.

Like so many of the people we met, this old gentleman seemed pretty amused by having a camera pointed at him.

Preparing for a Chinese Opera performance.

Trees surrounding West Lake which is next to Hangzhou and has been a tourist destination for several thousand years.

Back in Shanghai, I had an opportunity to spend some time with curator Jean Loh, who operates a wonderful photography gallery called Beaugeste in an area known as Taikang Lu. 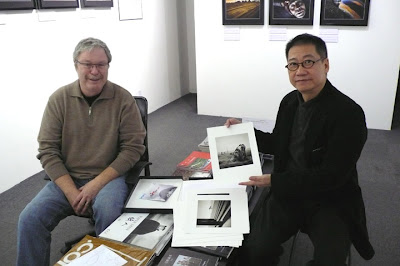 At ground level, this warren of shops and restaurants feels very much like a tourist trap, however the upper levels of many of the buildings serve as artist studios and galleries. 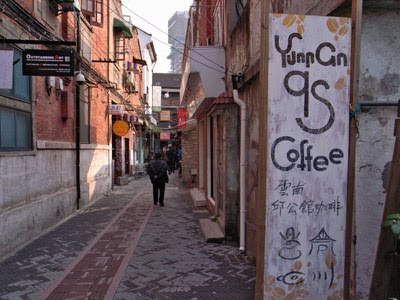 Tomorrow, Doug will introduce you to Jean Loh and three of his artists….