I first became aware of Alia Malley’s stunning images when I co-curated an exhibition for the Photo Arts Council of the Los Angeles County Art Museum. I spent a day gallery sitting and found myself returning to her images, which in person are incredibly beautiful. There was something painterly and timeless about the work, but also something familiar. I finally realized that I was looking at a landscape that I had traversed many times, but had never found it particularly interesting, and certainly not beautiful. And that realization changed how I look at where I live.

Alia was born in La Jolla, a community just north of San Diego in California, and was raised in Portland, Oregon. She received her BA in Critical Studies from USC School of Cinematic Arts, and her MFA f rom University of California, Riverside in 2010. Her project Southland won the 2011 CENTER Dealer ʼs Choice Award, juried by Dianne Vanderlip, Curator, Gagosian Gallery, Los Angeles, CA & Curator Emeritus, Denver Art Museum. Southland was also awarded the 2010 Merck Prize at the Darmstädter Tage der Fotograie, and was presented as a solo exhibition at Sam Lee Galley, Los Angeles in 2010. She was a 2009 Runner Up at the Forward Thinking Museum/JGS, and a Finalist /Honorable Mention at the Newspace Center for Photographyʼs 2008 Juried Exhibit ion, curated by TJ Norris. All of this certainly makes Alia’s journey a success story. 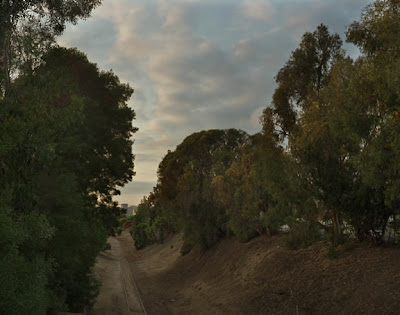 Alia is featured along with John Divola and Chris Boot in this video that was made at the Darmstadt Tage der Fotografie, where she won the Merck Prize last year. She speaks about her process and her work. 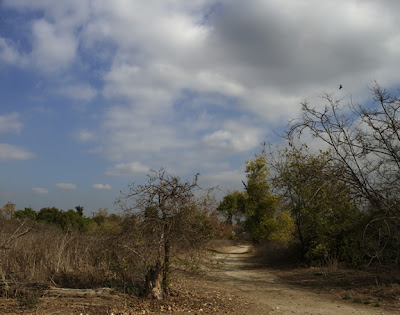 Statement for Southland: These images are from a current series of work, Southland, that I began in 2009. They mark my continued interest in making photographs that explore the environment and our ambiguous relationship to it. On the one hand, these images are invested in a specific sense of place: the Los Angeles landscape of currently dis-used spaces. These discarded sites have historically been considered civically or culturally valuable. Considering the cyclical nature of time and renewal, they will, at some point in the future, once again regain a useful vitality of some sort. Currently, however, they lie fallow.

The generic, lack of specificity of these “in-between” sites is equally compelling in the larger conversation; they donʼt necessarily read as Los Angeles, or California, or even America. They could be anywhere. Which they may as well be; these remnant land-tracts are everywhere. At one end of the spectrum, these images exemplify a classic example of natureʼs grandeur and benign beauty. In counterpoint to this benevolence lies a darker undercurrent. The relationship between the two is charged, hard to pin down. Ultimately though, they are two sides to the same coin. This interests me. I consider these photos revisionist landscapes. They exist in the space between traditional, historical landscape painting and vehemently realist photographs—they are documents of our time, showing us what this place look liked one a certain day at a certain time. I donʼt set out with a specific agenda to address a specific issue when I walk out into the landscape with my camera. I just go and I look, and then report back.

Congratulations on receiving First Place in the Dealer’s Choice Award through Center and for the recent feature in Unless You Will, Issue 14. Let’s back up to find out how you got started in photography.

Thanks so much. I went to undergrad film school at USC, and half-way through I realized I was trying to tell stories at 24 frames-per-second, but had no idea how a single frame was created, so I took an intro photo class. I got an F in the photo chemistry unit, but loved the rest of it. I ended up taking three classes total, which was the extent of my formal photo education until I started graduate school in 2007. In the 13 years in between, I photographed editorial & commercial work, but my heart wasn’t ultimately in it. I didn’t want to become a commercial photographer with “personal work” on the side. To that end, I applied to grad school to force myself to work on my own projects, and learn to think critically about those projects. I finished my MFA last summer, in 2010. 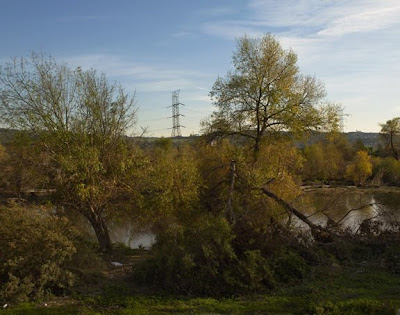 What camera do you work with, and what draws you to the imagery you produce?

I started shooting with an 8×10 Deardorff in 2001, and continued with that until grad school, where I needed to be producing more work on a weekly basis. Also, I work alone and often in fairly sketchy areas where it’s not always good to be a woman trapped under a dark cloth, and had experienced a close-call while working with the 8×10 up in the Angeles Crest area. I realized I needed to be able to work and move faster through the landscape, so in 2009 I traded down for a Grand View 4×5. But then they stopped making the Fuji Ready-Load film that I liked, and I lost access to the drum scanner at school when I finished the MFA, so I transitioned to digital last year. I’m currently working with an old Contax 645 camera, with a Phase One P30+ digital back. I used to shoot editorial with that camera using a film back, and now it’s just got a digital back on it. I love it. I buy all my gear used, which makes a rig like that financially possible.

It’s hard to say what draws me to certain imagery. It’s very intuitive, and probably more than anything has to do with a sense of place. My photography is very much about driving around until I see something that looks interesting. Sometimes I drive past places for months before I ever stop and get out with the camera. Sometimes it’s as great as I had hoped it would be, sometimes it’s a total bust. 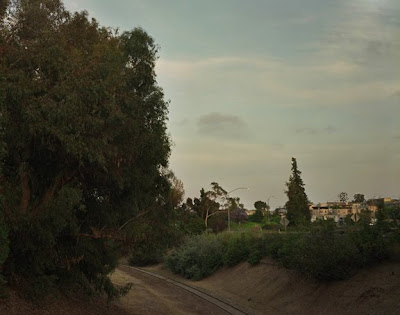 Were you influenced by a particular artist or photographer?

My influences are pretty broad, and are by no means limited to photography. I love the way the Western landscape is portrayed in the early survey work of Carleton Watkins and Timothy O’Sullivan, and by New Topographics guys too, in particular Robert Adams and Lewis Baltz. I studied with John Divola, and he has influenced the way I think about my work for sure. But I also love the way artists like Robert Smithson and Richard Long address issues surrounding landscape in their work. Filmmakers like John Ford, Wim Wenders, and Andrei Tarkovsky have made a huge impact on me in terms of how they approach storytelling and place. Classic landscape painters like Corot, Constable, and Van Ruisdael also factor in there, especially when I’m printing. But then, I’m also a massive Brian Eno fan. So my interests are sort of all over the place. 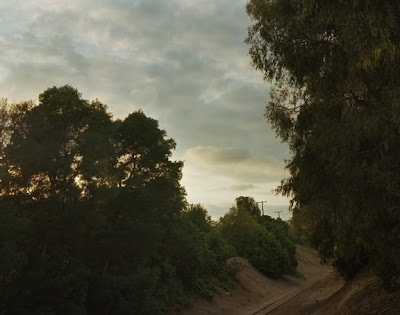 Do you prefer to shoot locally, or would you like to make work somewhere else in the world?

Right now I’m fairly invested in California, as I have a couple of new, local projects that I’m working on. But I love to travel and will undoubtedly work farther afield in the future. I am dying to go to Alaska. And Antarctica. I have no idea why I like to go to cold places where camera batteries die quick and brutal deaths. 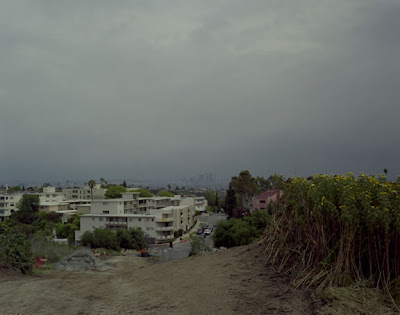 You have had a number of successes lately. How do you go about selecting what to submit to and any thoughts of competitions and awards?

I submit to competitions based on who the jurors are mostly. Dianne Vanderlip was the sole juror for the Center Dealer’s Choice award. She wrote a fantastic statement that’s posted on the Center site about the experience and her decision-making process that anyone who enters competitions should read. In a larger context though, the competitions/awards thing gets complicated. A film director I once worked with said that awards are meaningless…until you win one. Which I think sums it up. 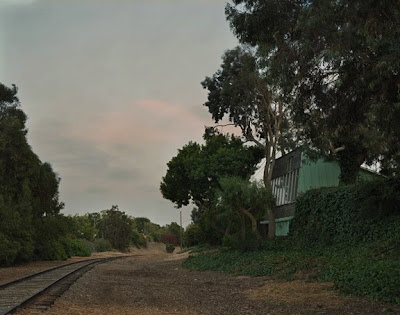 Are you active in social media and has it changed how you promote your work?

I’m on Facebook but I’m not an active social networker otherwise. I’ll post announcements and invites to exhibitions on Facebook, and it is great for that, and connecting with and keeping in touch with my art world friends. But I’m just as likely to post horse pictures to share with my horse world buddies. It’s kind of a problem, really. 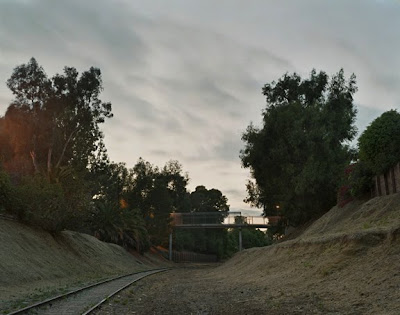 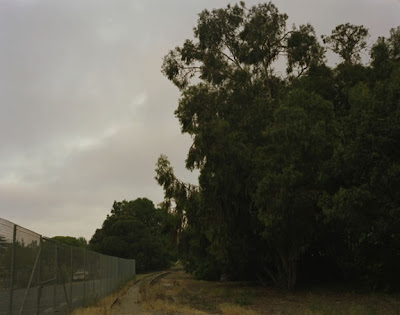 I saw Matthew Weiner, the creator of Mad Men, on a panel discussion last year and he said something really smart: choose your critics wisely. He said, don’t just let anyone read your scripts. Because misguided or stupid feedback can be so devastating. Especially when you’re just getting started. So I have a couple of trusted confidants that I show work in progress too, but that’s it. Ultimately though, I just try to stick to my instincts and keep working, working, working. 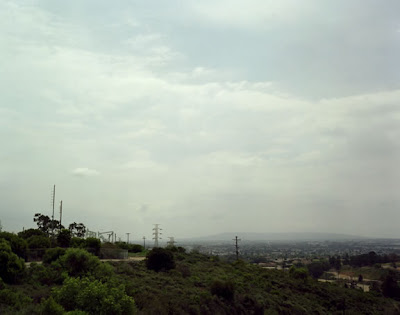 Getting up to go ride horses in the morning, then shooting all afternoon. I actually had one of these days recently. I’m sure I looked like a goofball in my riding gear with my camera, but who cares. It was the best. 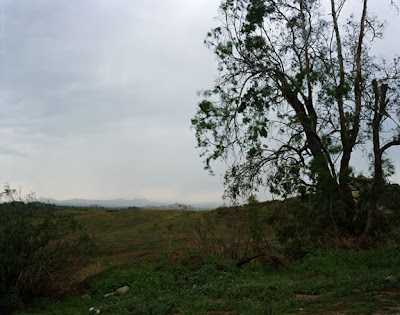