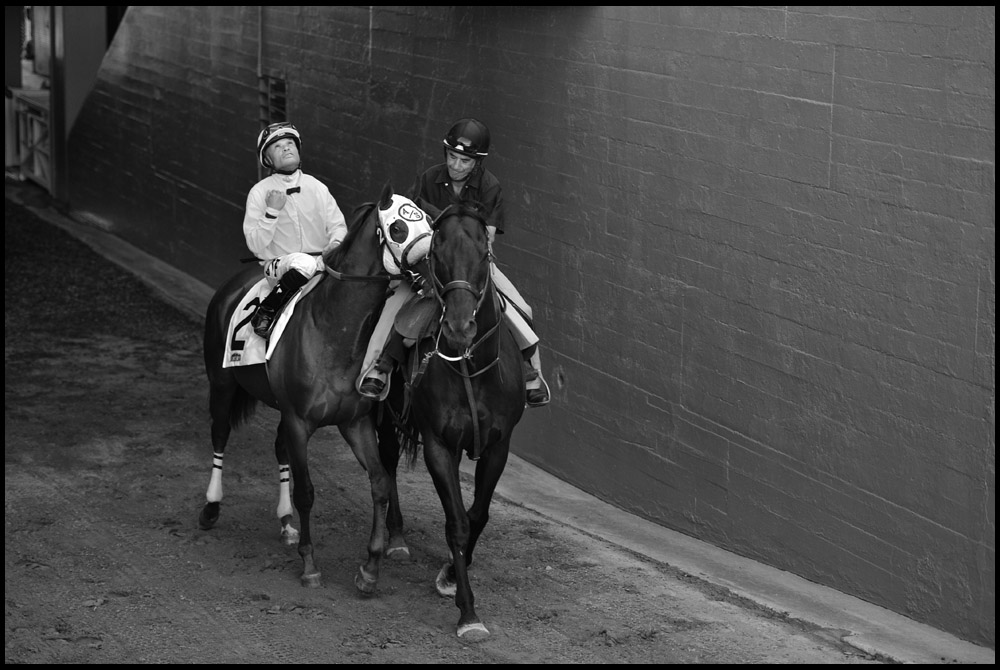 I met Bill Valentine at the Medium Photo Festival in San Diego last fall when he gave me his book, Santa Anita. I finally had some time to spend with it and really enjoyed his series on horse racing.  It’s a long term project, the kind where the photographer becomes intimate with his subjects and deeply understands the environment. In fact, Bill has become an expert at becoming intimate with his subjects as evidenced in his bio.
Born in Pasadena, California, Bill began his career when his parents placed a camera in his hands after graduating high school.  He received his BFA from Arizona State University and had the good for fortune to study under such luminaries as Bill Jay and William Jenkins. After graduating, he worked on a documentary project following the Pasadena Police department which led to a career as a Police Officer.  The schedule allowed him the time and freedom to photograph, but also an intimate knowledge of people and behaviors. His work has been exhibited widely. Now retired and living in Newport Beach, CA, Bill maintains a traditional darkroom.
In 1991 Bill published the book Santa Anita. Retired Daily Racing Form writer Leon Rasmussen wrote about the history of the track and Bill Jay wrote the afterwards.  The book can be purchased here.
Santa Anita
I first began photographing at the Santa Anita Racetrack in 1987 because I was looking for images for my City Series.  I found photographing in New York, or Chicago, or San Francisco was much easier than photographing in Los Angeles.  Most people in those cities walk and are on the street interacting while people in Los Angeles usually travel about in their cars.  I am not saying there aren’t images to be had in Los Angeles but it just is different.  What I found at Santa Anita was an amazing mix of humanity that made for great images.  At the track you see all ethnicities, all economic levels, and almost every element of humanity come together in one location for a common interest.  The interaction allowed me to get strong images and the background of Santa Anita’s art deco structure just added to the images.  I quickly became interested in the horses and the jockeys and then the Santa Anita series became its own body of work.  I am also a romantic and I fell in love with the tradition of the sport and the atmosphere.
Martin Pedroza sign of the Cross entering the track on Trice Up. 1st race 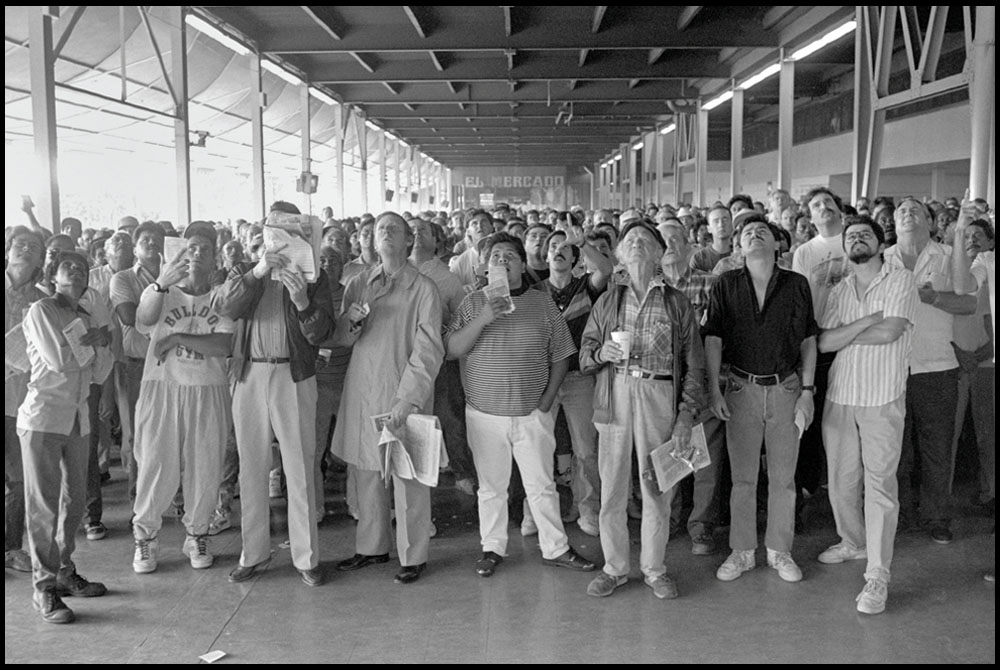 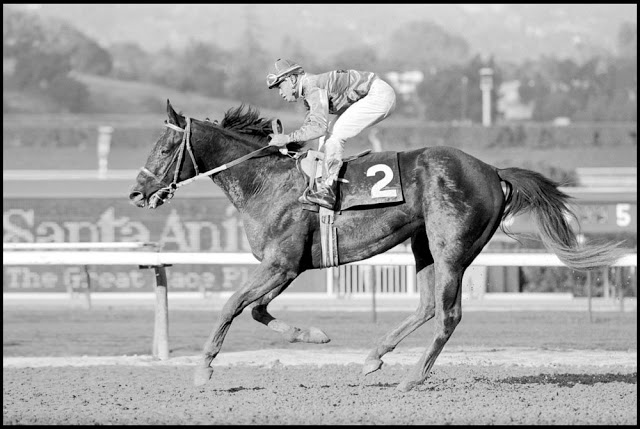 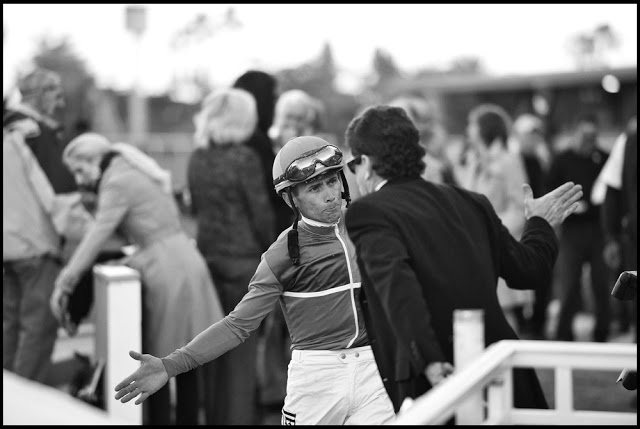 Garrett Gomez after winning the Malibu Stakes on Jimmy Creed 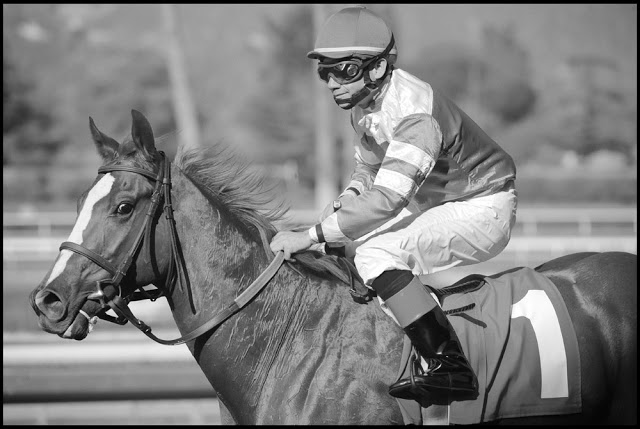 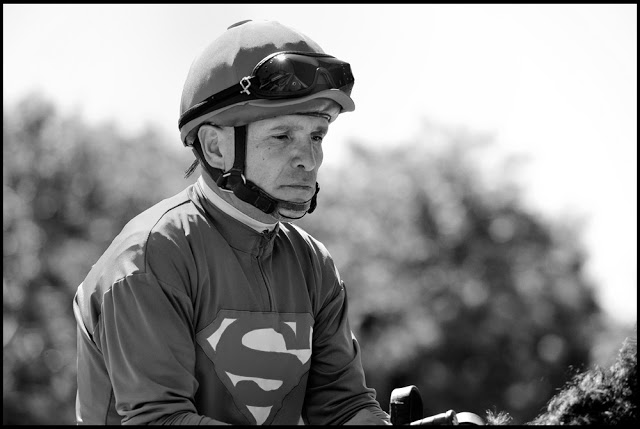 Patrick Valenzuela
The value of this image increases when you know the story behind the subject.  Patrick Valenzuela could have arguably have been the most talented jockey of all time, he has won over four thousand races including over 50 stakes races.  But he has battled drug and alcohol addiction throughout the majority of his career which has caused him to be suspended a dozen times.  One of the most gracious people you could ever meet I think his addiction problems started from trying to keep his weight down to be able to ride and then possibly grew from the stress of high expectations based on his success.  With knowing his story, the Superman logo silks then take the image to the next level for me.  One other element which has meaning for me in this image is Patrick’s eyes and expression.  I photographed Patrick dozens of times over the years and he always rode through the paddock with his head up high and smiling.  He beamed confidence and engaged the crowd.   When you know Patrick’s story the irony of the elements in the image then establish the image’s full value. 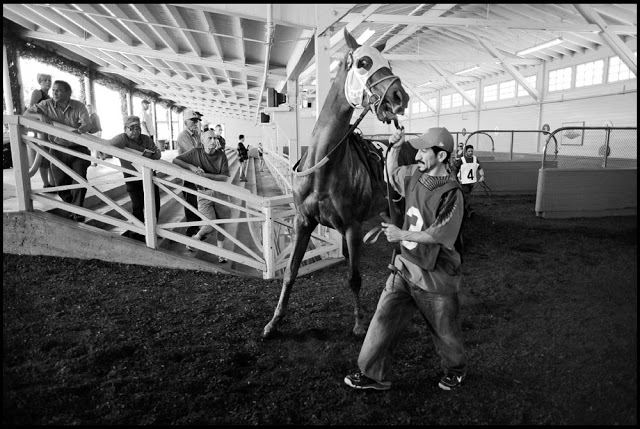 Job Boss leaving the saddling barn for the paddock 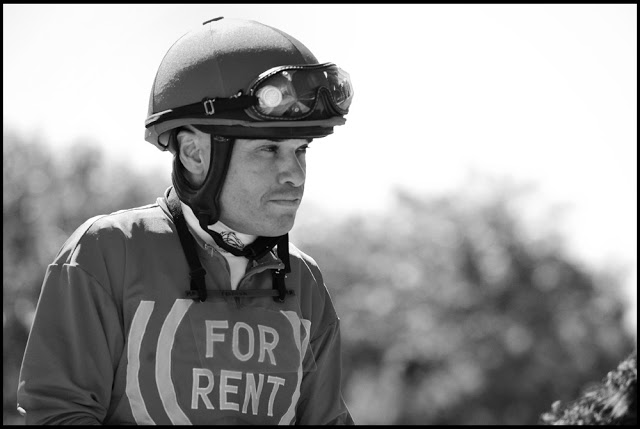 Martin Pedroza
I have come to really appreciate the jockeys and what they go through.  It is incredibly hard for them to keep their weight down so they can make weight and ride plus the power the horses possess really is dangerous.  My biggest appreciation for the dangers has come from being around the starting gate.  I have photographed from up inside the gate a number of times and I know starting gates are sturdy and weigh a lot.  But when you get them loaded with eight to a dozen amped up horses ready to race the gate bounces all over the place really showing how much energy is being harnessed.  It takes an incredible amount of strength, and knowledge, to guide a racehorse and people that think jockeys just sit up there while the horses run don’t have a clue about the sport.  Jockeys get banged up all the time but since they are basically independent contractors if they are out hurt they don’t get paid.  I found the “For Rent” silks appropriate for the profession and I loved the look in Martin’s eye.  I found it ironic that I came away with two jockey images which were so strong for me from the same trip to the paddock. 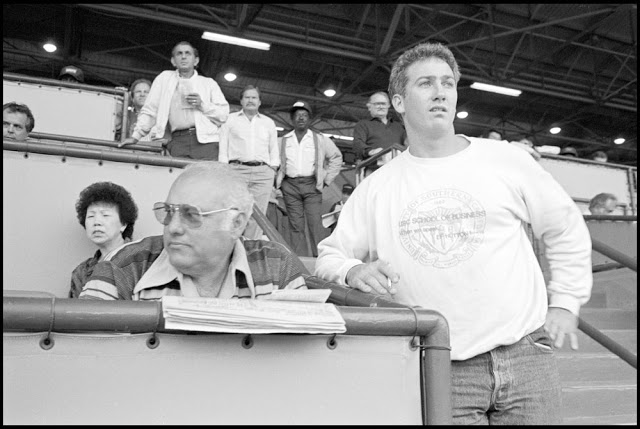 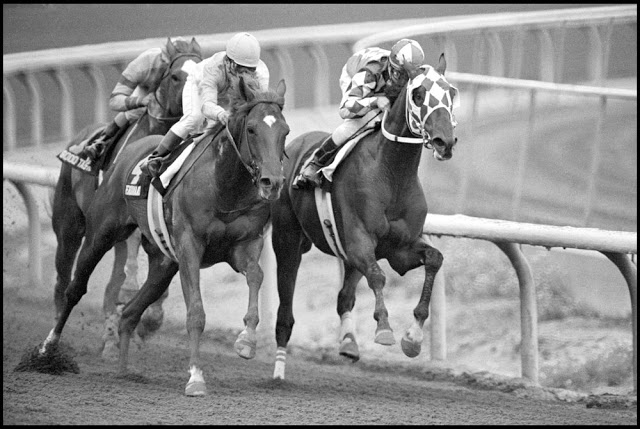 The San Bernardino Handicap – Alysheba (McCarron), Ferdinand (Shoemaker), & Good Taste (Stevens)
This image was the photograph that got me noticed by Jane Goldstein who was the Media Director at Santa Anita.  I made the exposure early on in the project and before I knew much about racing.  I loved the muscle tone of the lead horses, their leg placement, the fact it was two horses moving out to compete against one another, and I liked how my background played out.  Once I learned more about racing I realized this image had even more too it because of the horses.  Willie Shoemaker won his last Kentucky Derby in 1986 on Ferdinand and Chris McCarron won his first Kentucky Derby on Alysheba in 1987.   Today most Kentucky Derby winners stop racing after their three year old season to start breeding so the chances of seeing two Kentucky Derby winners race against each other in the future will be extremely rare. 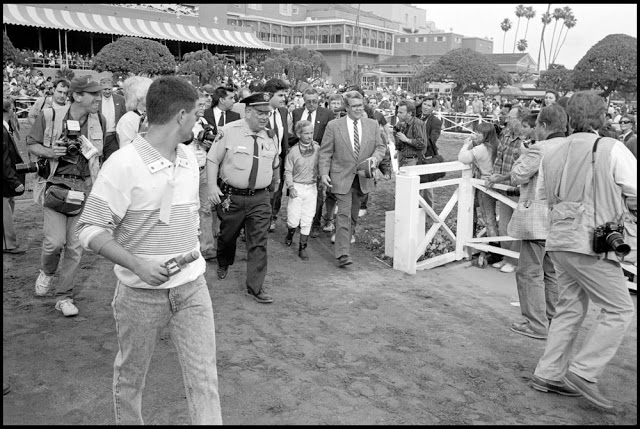 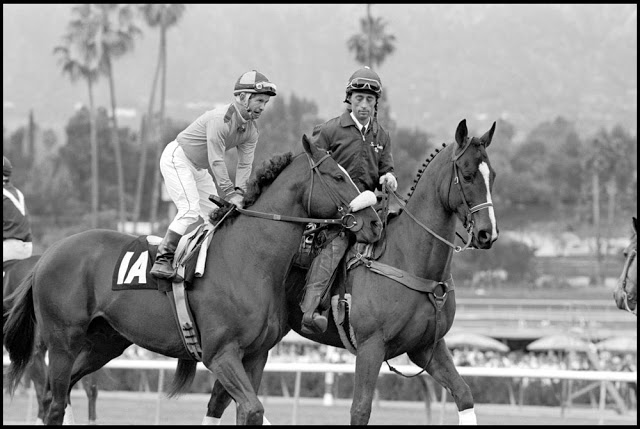 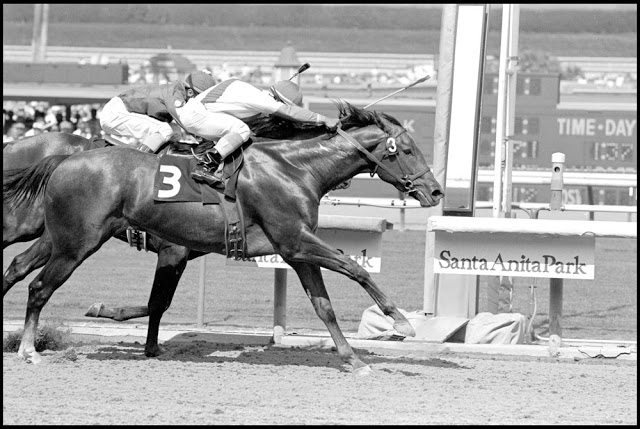 Julio Garcia up on Lazarito wins the 2nd race 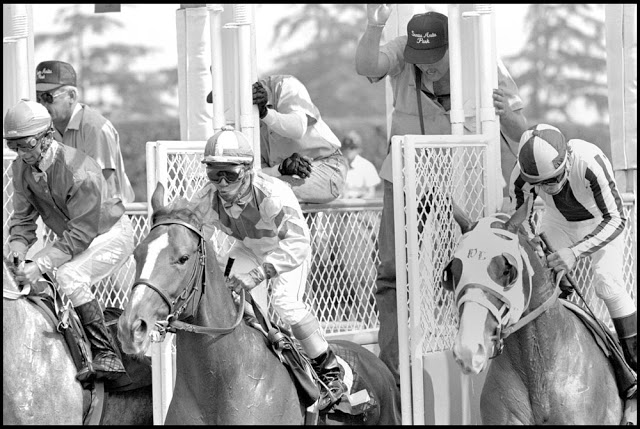 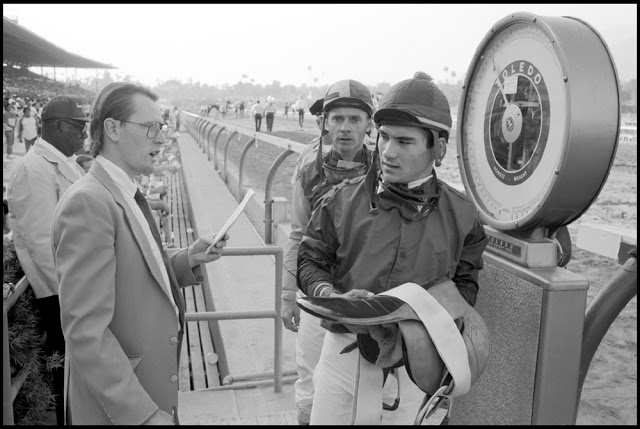 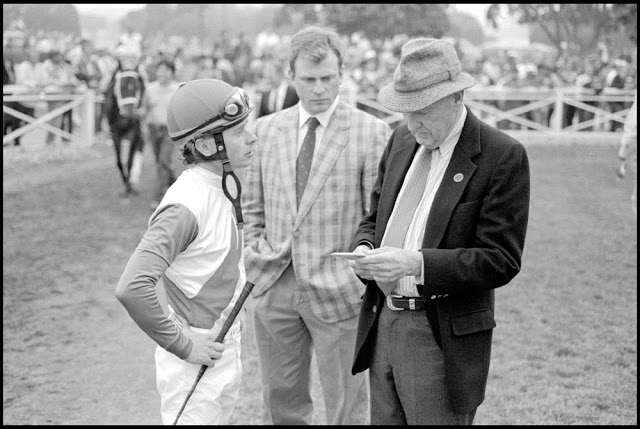 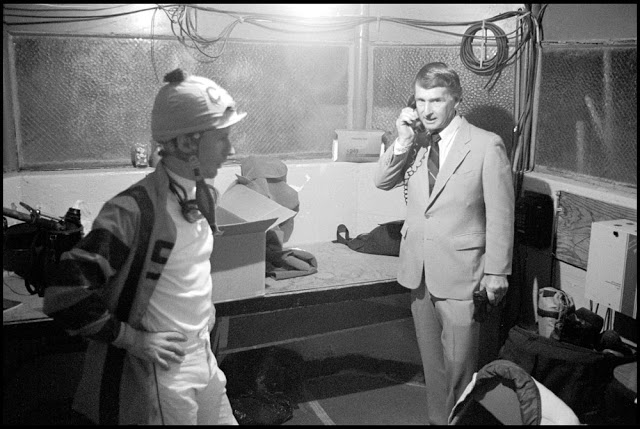 Trainer John Russell and Jockey Russell Baze filing claim of foul
Russell Baze is now the winningest jockey of all time with over 11,836 wins in over 50,000 races 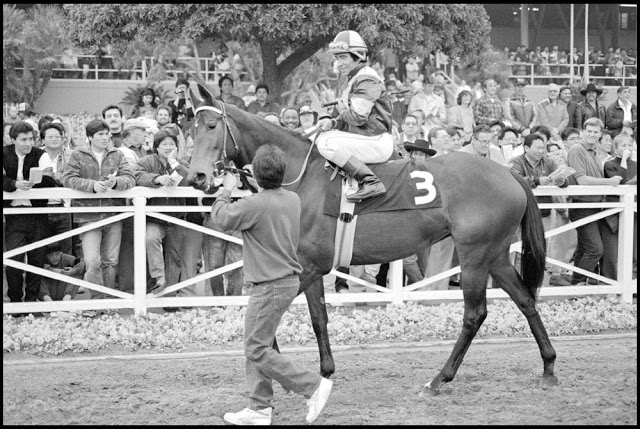 Laffit Pincay Jr. up on Bayakoa
Laffit Pincay Jr. was one of my favorite jockeys and when he had to retire he was the winningest jockey of all time at 9,530 (currently second).  Bayakoa was an amazing filly who knew how to perform for the crowd in the paddock and win races on the track.  She was my favorite filly until Zenyatta came on to the scene a couple years ago. 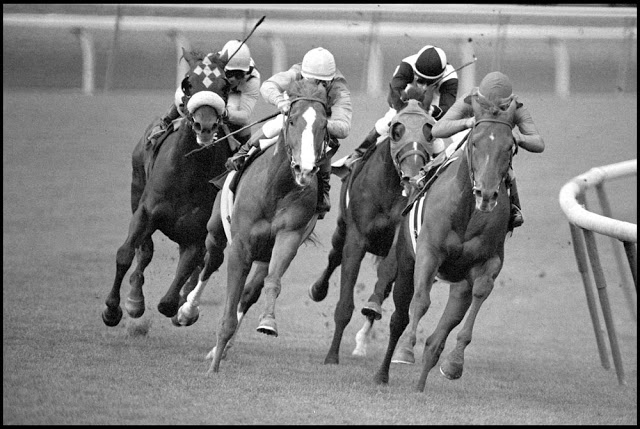