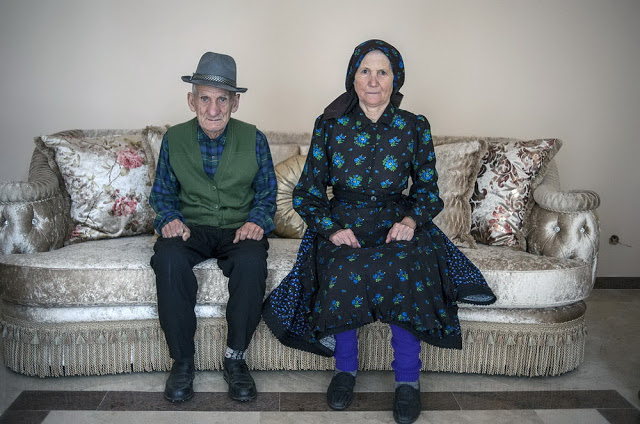 Certeze, Tara Oasului. Gheorghe and Maria Balta have 3 children, all working in France. In time, they have transformed and enlarged the old house, until it got to today’s version, a house with 2 floors and a glass front.

by Kathleen Laraia McLaughlin
Photojournalist Petrut Calinescu is based in Bucharest and represented by Panos Pictures. He graduated with a BA in Journalism and Mass Communication from Bucharest University, and has twice won the Romanian Photojournalist of the Year Award. Personal projects have led him to India, Kenya, Bolivia, Afghanistan, China, and the Black Sea region. Today, without losing his passion for travel, he’d rather focus on issues closer to home, where knowing the language and the cultural codes helps him to delve deeper into a project.

The project highlighted here, Pride and Concrete, documents the effects of emigration on the rural landscape in parts of northern Romania. The project began in October 2010, initially funded by Petrut, and was part of a Masterclass organized by Robert Bosch and World Photo Press. Following, grants came from RCI Paris, AFCN, and OAR. This project has been exhibited in Berlin, Bucharest, and Negresti Oas, where many of the images were taken. The book received enough crowd-funding in order to begin printing and will be released in September. You can order the book HERE.
Pride and Concrete
One in six Romanians lives and works abroad. Most of the migrants come from rural areas and the money sent back home has irreversibly transformed their native villages. Unlike in the city, where economic competition is a more subtle affair, in the villages changes are highly visible and the main street acts as an open stage for ostentatious display. Pride and Concrete is a project about the recent transformations occurring in rural communities following decades of migration abroad for work. The gentle, bucolic sounds of small scale agriculture have been replaced with the muffled murmur of concrete mixers and village elders strut around on building sites, inspecting progress.