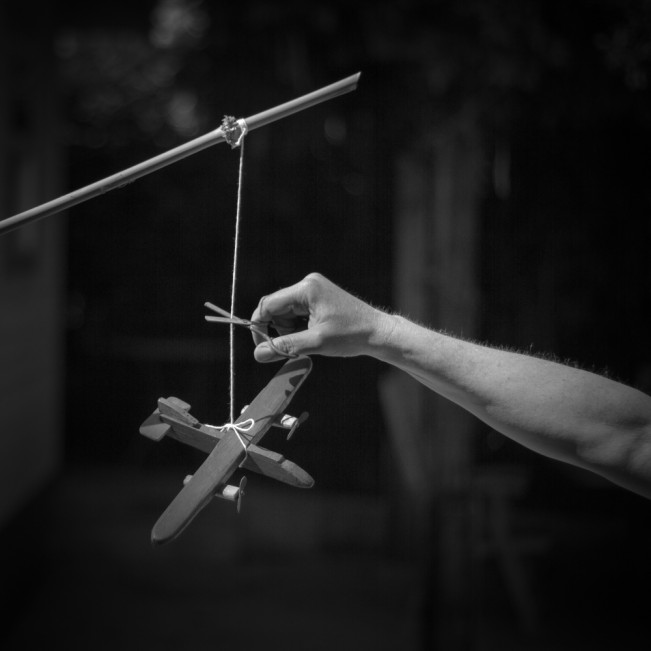 Who or what determines our fate? Why do bad things happen to good people?  Photographer Brian Van de Wetering has constructed darkly humorous and thought provoking tableaux of scenarios we hope to avoid in future. His images make us consider the tragedies that change the course of our lives and leave room to wonder if there is more to misfortunes than we care to admit.

Brian is a fine art photographer living and working in Southern California. Brian’s interest in photography grew in fits and starts. When he was a young boy, he had a Kodak Instamatic and took photos at family events. But it wasn’t until he appropriated his father’s Olympus OM-1 in high school that he began seeing the artistic possibilities in the captured image. But film was expensive for a young man and money often went to other forms of entertainment. After college, a career in software development kept the wolves from the door while playing in a punk band provided an artistic outlet. Photography was mostly in the background.

In 2010, success in the Anza Borrego Foundation’s annual Desert Photo Contest rekindled Brian’s photographic passion. He has since studied at The Los Angeles Center of Photography and the Santa Fe Photographic Workshops. In recent years, Brian has exhibited work in many group exhibitions including at the PhotoPlace Gallery, Los Angeles Center for Photography, and the Perfect Exposure Gallery. His photographic adventure continues to take him in new and exciting directions. Ongoing projects and interests include self portraiture, conceptual work, desert landscapes, and night photography. And he continues to play in the Irish punk band he helped found more than twenty years ago. 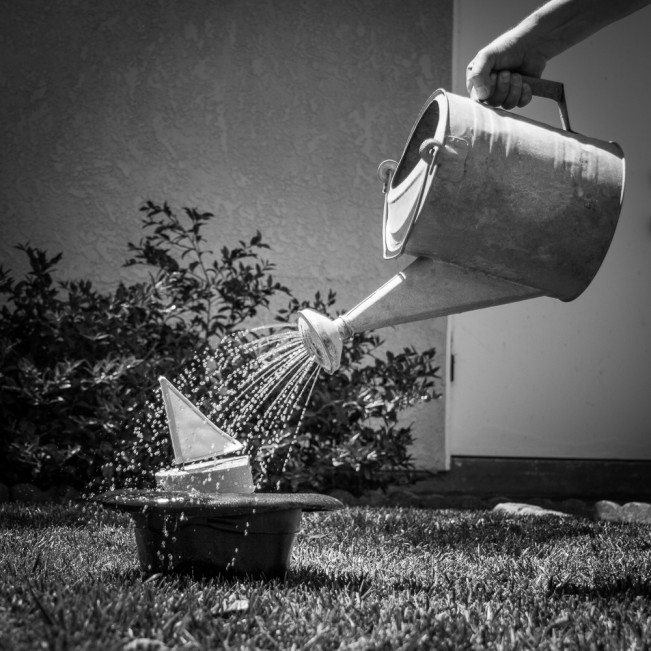 This series started with a single image that came out of an afternoon of play and experimentation without specific direction or any notion of what the work might be about. Friends and fellow artists saw the potential for a series and encouraged me to do more. Through a process of self reflection and writing, the central theme became clear: an examination of the forces, both internal and external, that bring calamity and suffering into our lives.

I’ve seen friends, family, and acquaintances taken from this world seemingly at random. I watch on social media as friends and acquaintances struggle with life-changing illnesses. Death and suffering are reported each night on the evening news. How do we make sense of this? How do we persist in the face of the indifference and randomness of the universe? As social creatures, we are born with a theory of mind, the ability to attribute intent, emotions, beliefs, and knowledge to ourselves and others. It is no wonder that we are drawn to create order out of this randomness by assigning it some external reason, intent, or plan: the Acting Hand. 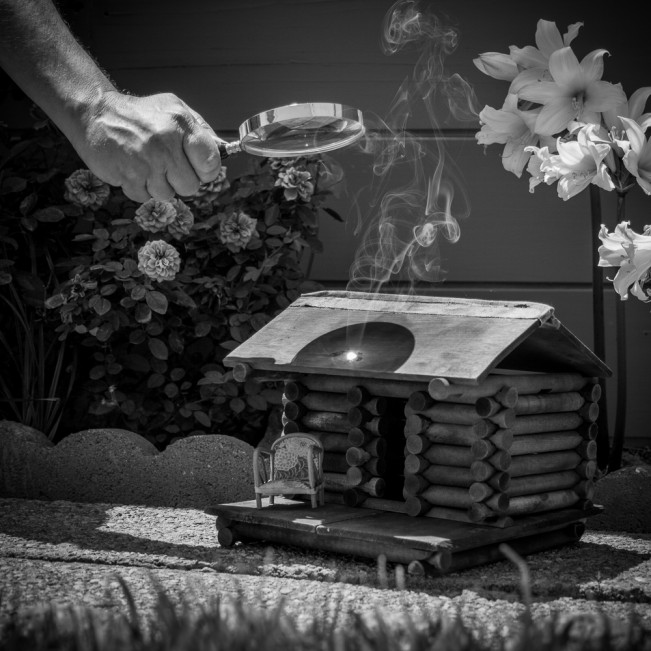 Whether we blame the Devil, God, fate, the stars, kismet, or destiny, we gain comfort from imagining an actor and motivation behind our suffering. With order comes solace. With chaos comes madness. But what of calamity meted out by our own hand or the hands of others? Are we solely responsible? Is it an act of free will or a throw of the dice? In the eye of popular science, addiction becomes a disease, the sociopath is born that way, and the abused becomes the abuser. Who creates the despot, the murderer, the rapist, the junkie? 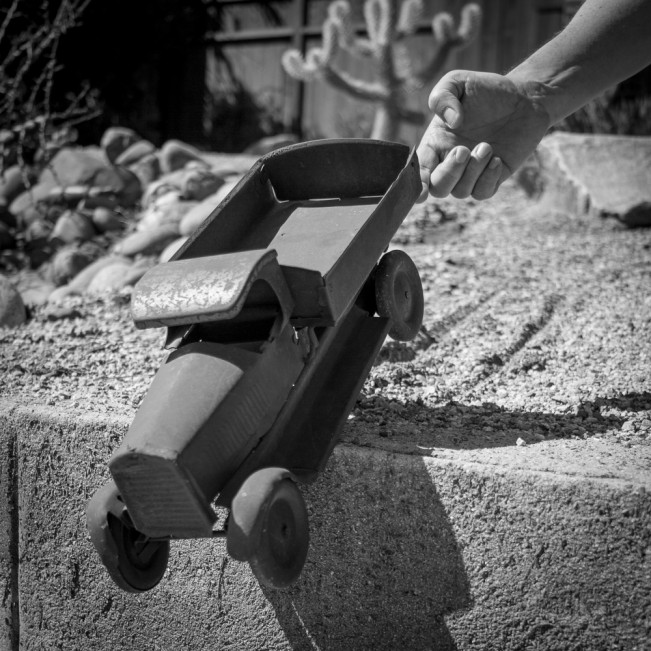 Although I understand intellectually that some events are truly random, I still feel a strong emotional draw to imagine some intent, the Acting Hand, even if only in metaphor. The hand is not just a metaphor but also the central question. In this series of staged vignettes I’ve brought this invisible hand to life to prompt further reflection on causation, randomness, and free will. And just as play is a part of my creative process, the theme of play is also central to the work. As children and artists we play God in our make-believe worlds and we can be cruel and destructive in our play. I’ve depicted events from history, literature, the evening news, and my own personal experience using children’s toys to illustrate our complex relationships with the suffering and misfortune in our lives and the world around us. Heavy stuff to be sure, but there is a thread of dark humor woven into these images that I now recognize as one of the ways that I cope with my own fear, worry, and anxiety. 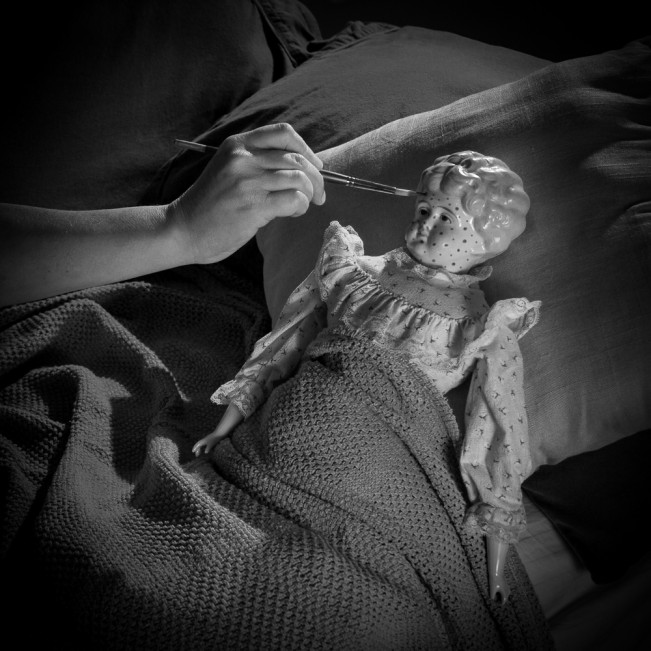 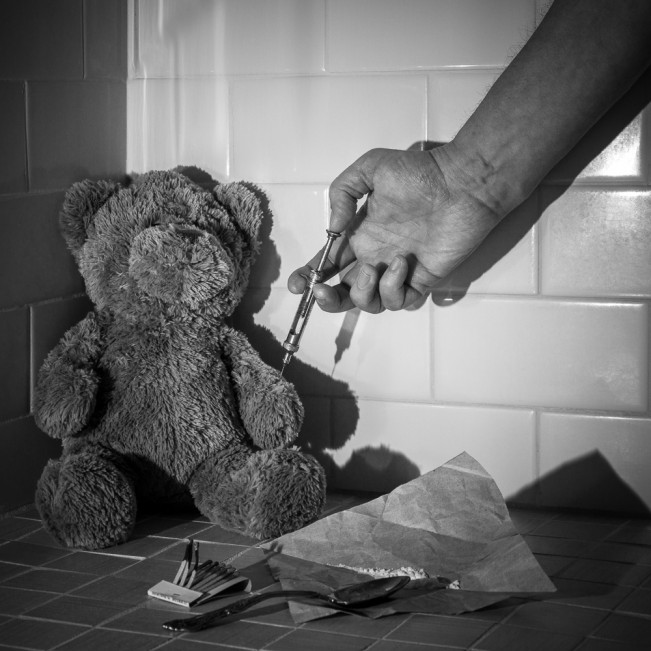 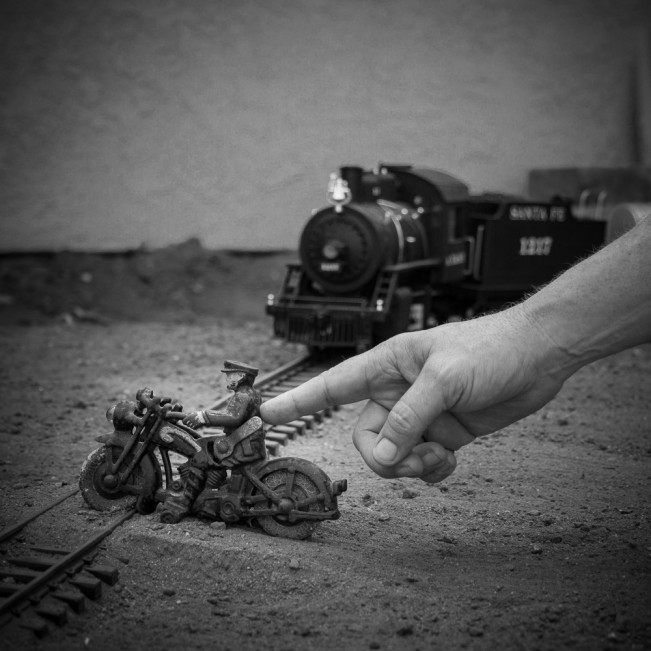 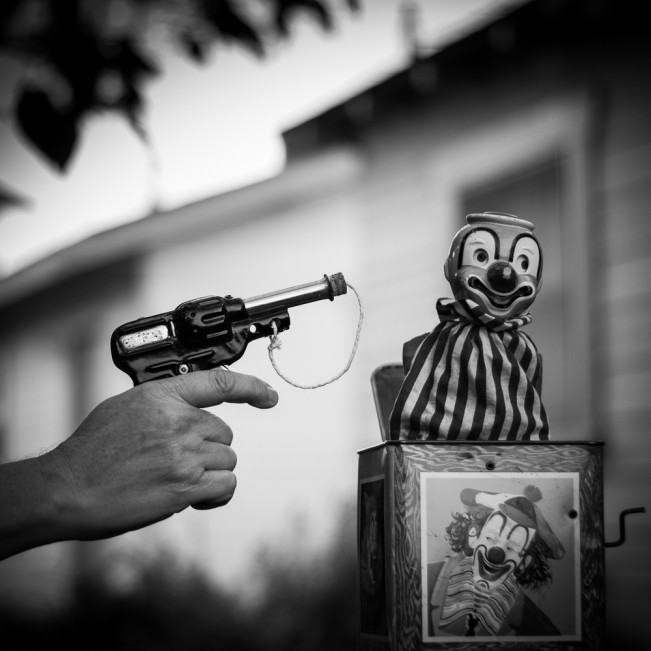 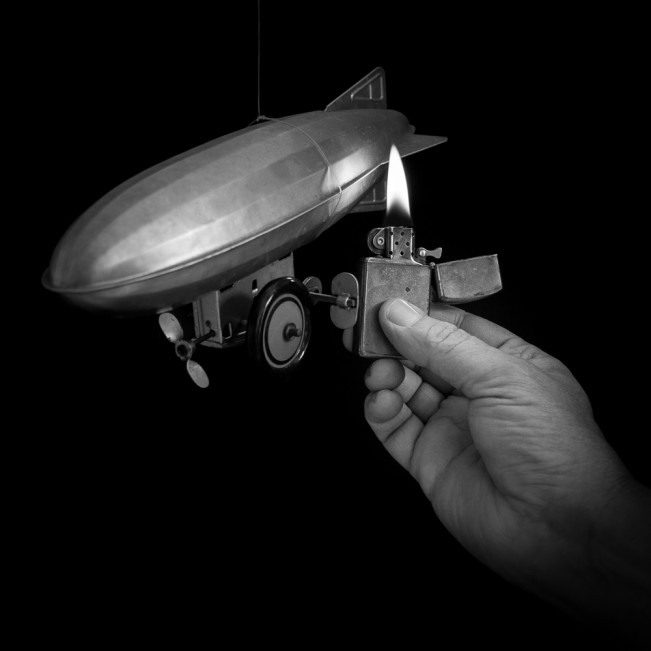 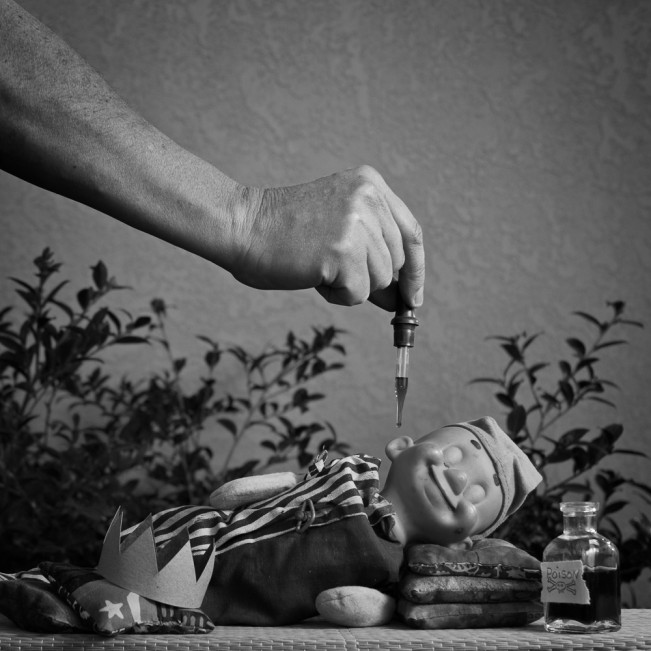 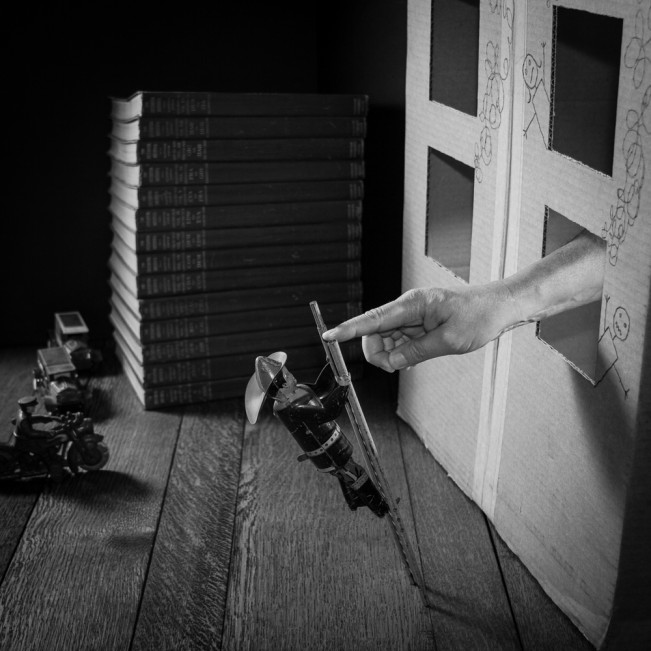 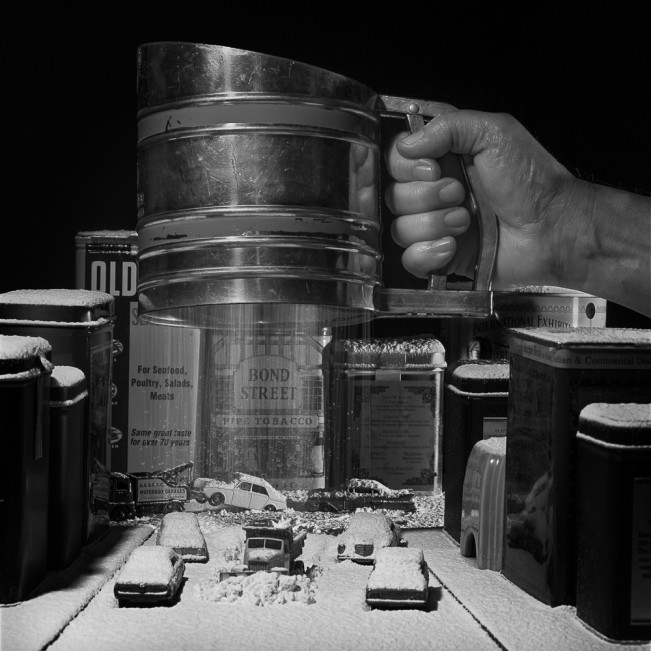 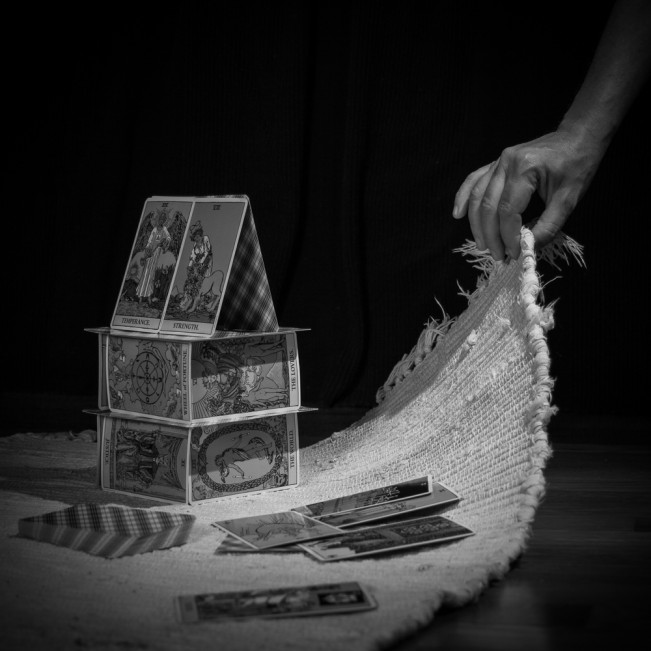 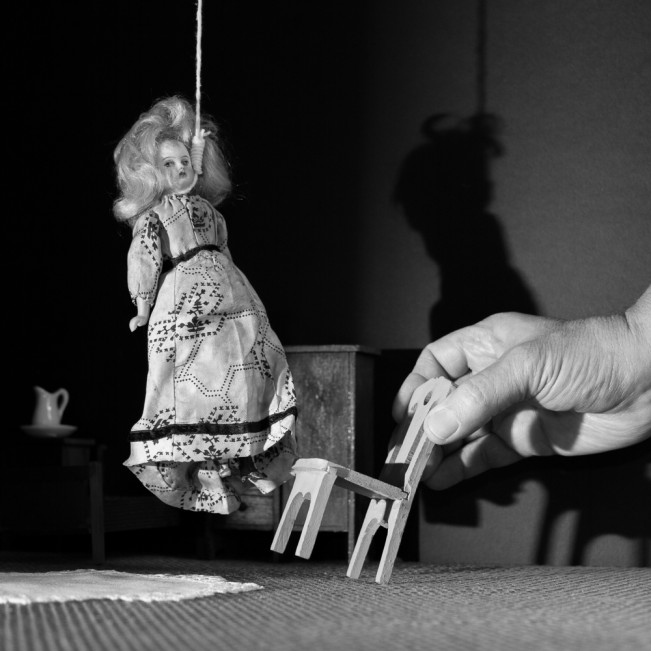