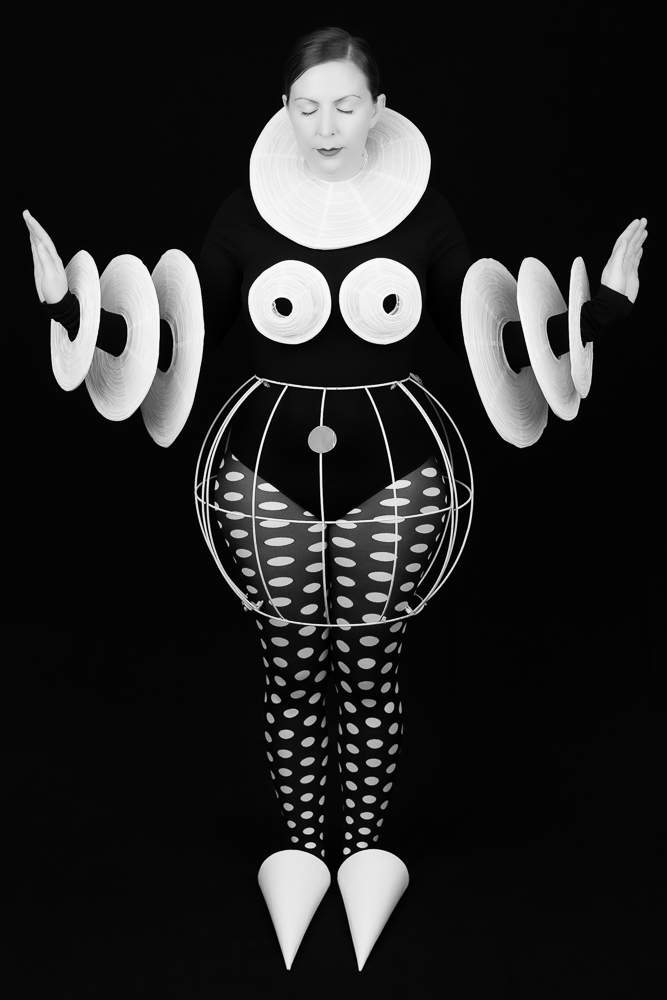 ©Brandy Trigueros, Fragmentation, 2017 The body has become fragmented, traces of us scattered throughout the data-sphere. There is a restructuring of the self, dismantling and resemblance through the prosthetic guise of technology.

Brandy Trigueros is a Los Angeles based artist who uses photography as a way to create visual narratives that explore womanhood, childhood memories, identity, memoir and staged inquisitions of self.

Her new work looks to connect the past and present historically and socially where previously her connection was primarily personal. This slight shift allows her to be both conceptual and socially conscious during this radically political time. After years of working in publishing at the Los Angeles Times and animation at Nickelodeon while holding her photographic self tucked away in a (locket), it wasn’t until experiencing the death of both of her parents within a four year time span that she began pursuing her artistic practice full-time. She is currently in her final year of completing her degree at CalArts. 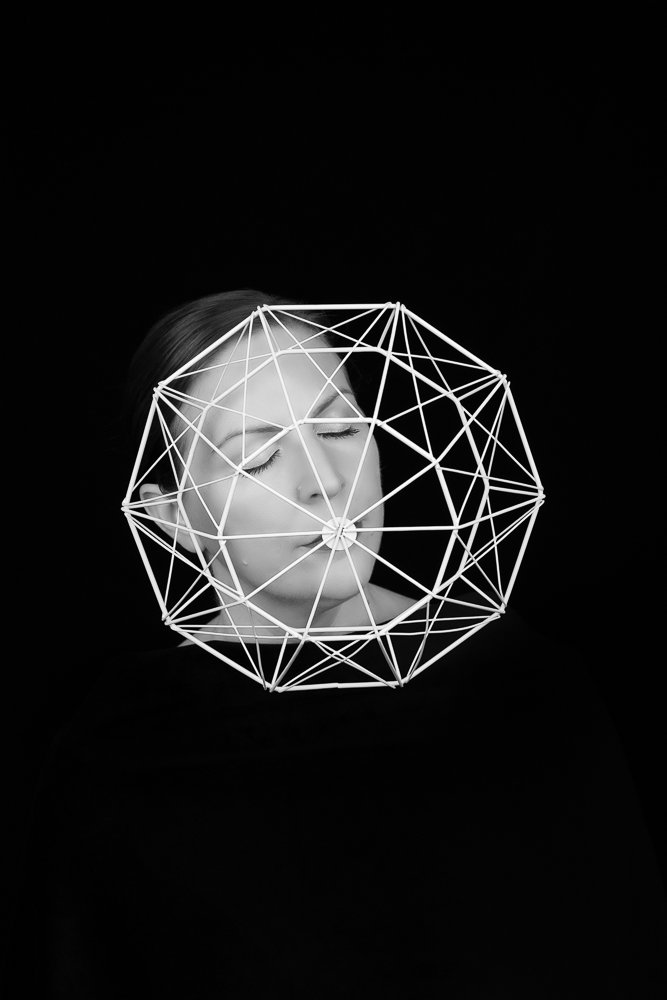 ©Brandy Trigueros, Facial Recognition, 2017 The privacy paradox where the invasiveness of technology is becoming commonplace.

Welcome to The Dadabyte Theater: a cyberspace of mixed timeline and an ode to the Dadaists and Bauhausian artists of the 20th century. As opposed to the crush of steel, we are currently facing a crush of data within the present technological information revolution. Using the studio as a stage for this in-camera self-portrait work, I aim to reflect a theatricalization of the “real”, an attempt to find balanced modes of being in a hyper-connected, ever increasing, mechanical society dominated by technology. By using products of industry, I aim to illustrate the constraints these new technologies present and chose to explore my own agency and autonomy through this work.

Parts of my body recede into the imagined dark spaces of history and the Internet, as other parts are being shaped and forced to conform to expectations of femaleness within regimented societal structures. Within the burgeoning, unchanneled broadcast of snackable short-form content and communication: texts and tweets for example – what gets lost is history, knowledge and critical inquiry. The female body is historically regimented and contorted – from the ruff, the corset, the bra to the current data stream of selfies, social network cyborg identities and political dismantling of our rights. While working at the Renaissance Faire the best part of my day was unlacing my corset. The alluring yet trapping aesthetic of shapewear is something all women contend with. And now, with the coronation of citizenship to Sophia, the first female hyper-tech robot, the female body seems ever-more threatened. 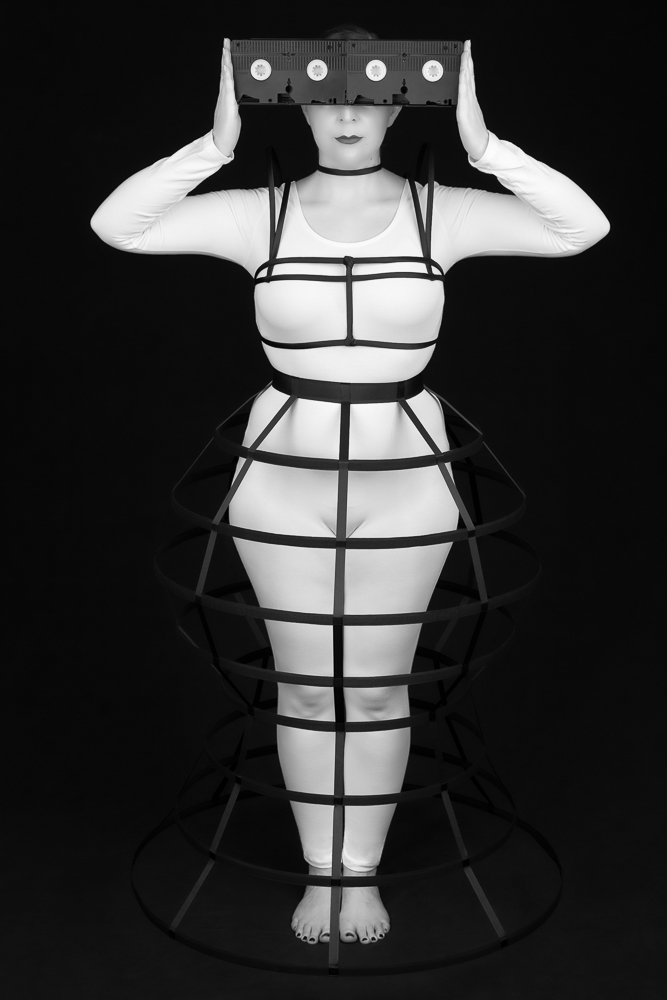 ©Brandy Trigueros, Surveillance, 2017 Everything we watch, read and do becomes a cyber fingerprint.

Growing up, I experienced generational shifts in technology, passing out of the pre-digital to digital – we are crossing into the new frontier with driverless cars, trucks, drones, and 3-D technology. Autonomous machines of war, labor, pleasure, care, companionship and other technological systems of control, domination and comfort are being produced within this dizzying systemic capitalist merry-go-round. In the current state of rapid archaicness of built-in obsolescence, I use referential technologies that still function but are mostly obsolete socially. We are all apart of this science nonfiction. Throughout history, each system, from a monarchy to corporatocracy, has forced segments of society to struggle for agency in these ever-expanding social, economic worlds. Examining history allows us perspective of what has been lost, and what has been gained, in order to inform a path to the future. 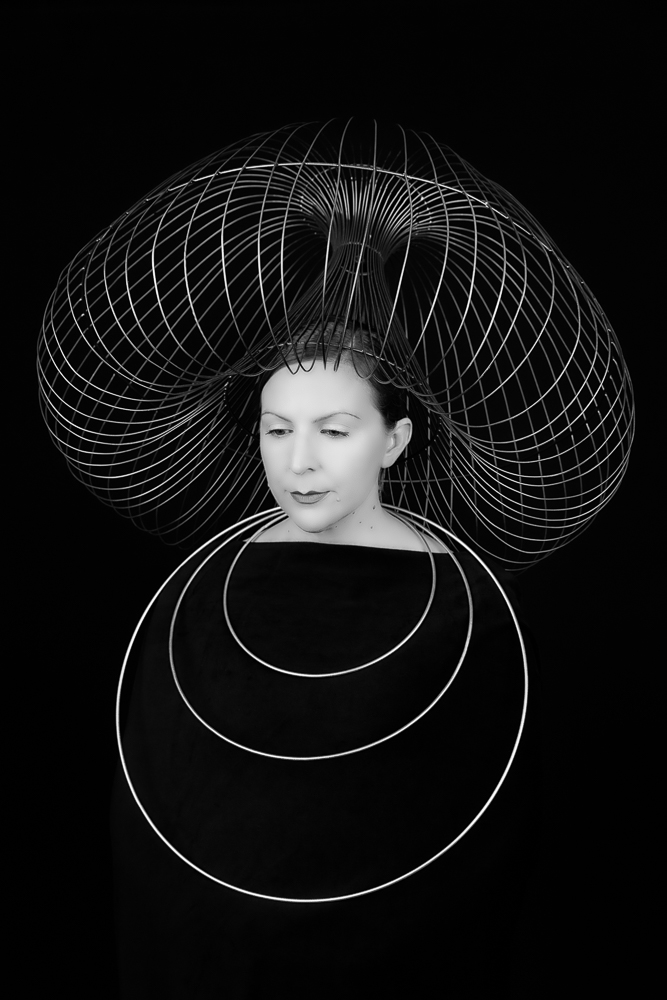 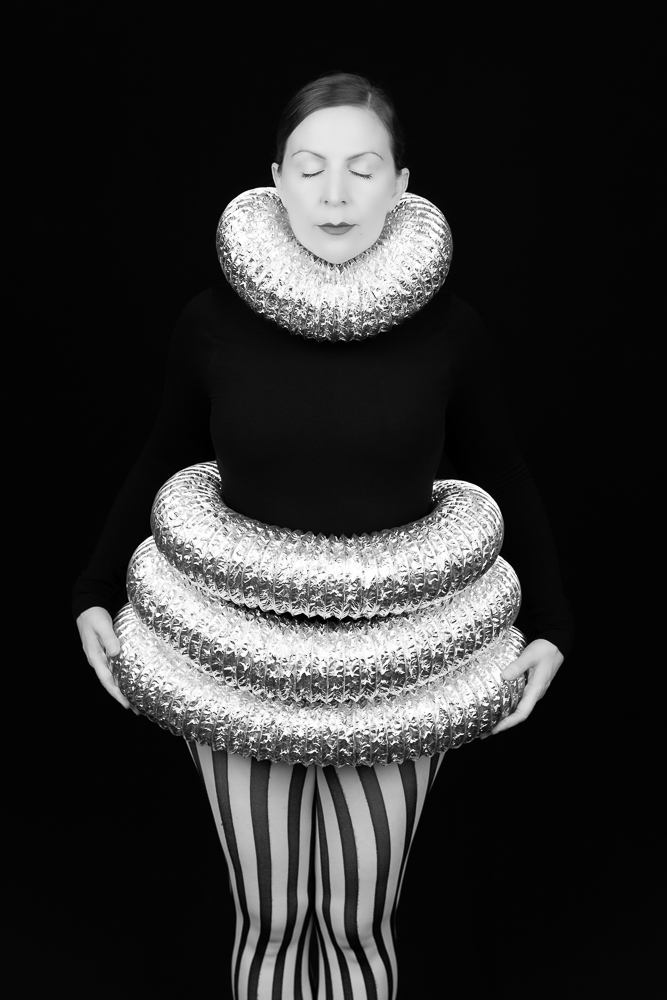 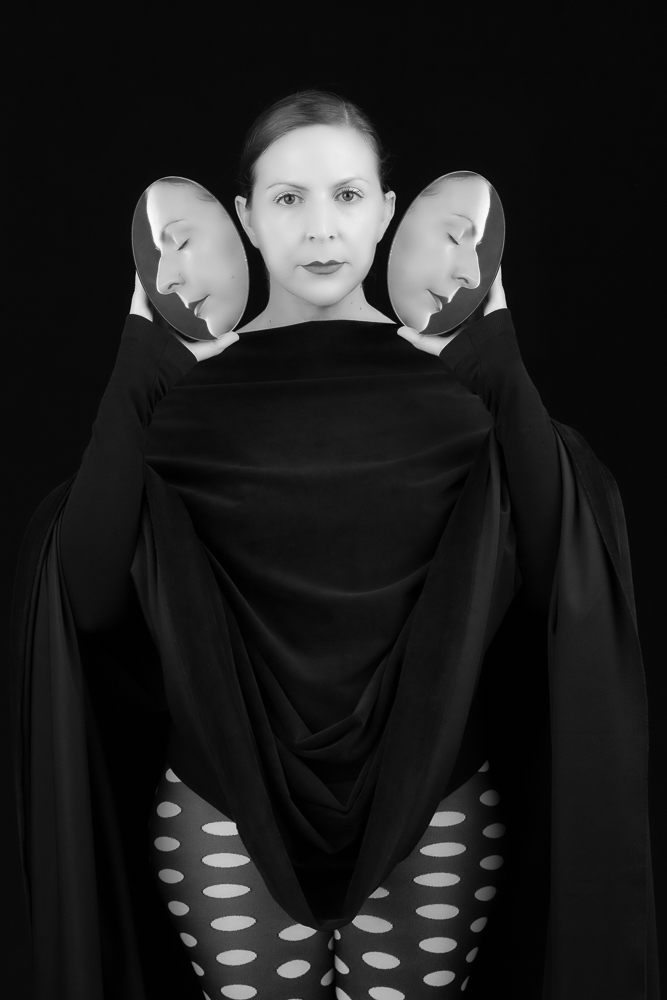 ©Brandy Trigueros, Me, Myselfie and I, 2017 Today’s socially constructed world lies in the illusions we’ve created through the space of technology, including our plasticized selves. Illusion becomes the familiar as our footing slips on the banana peel of the everyday. 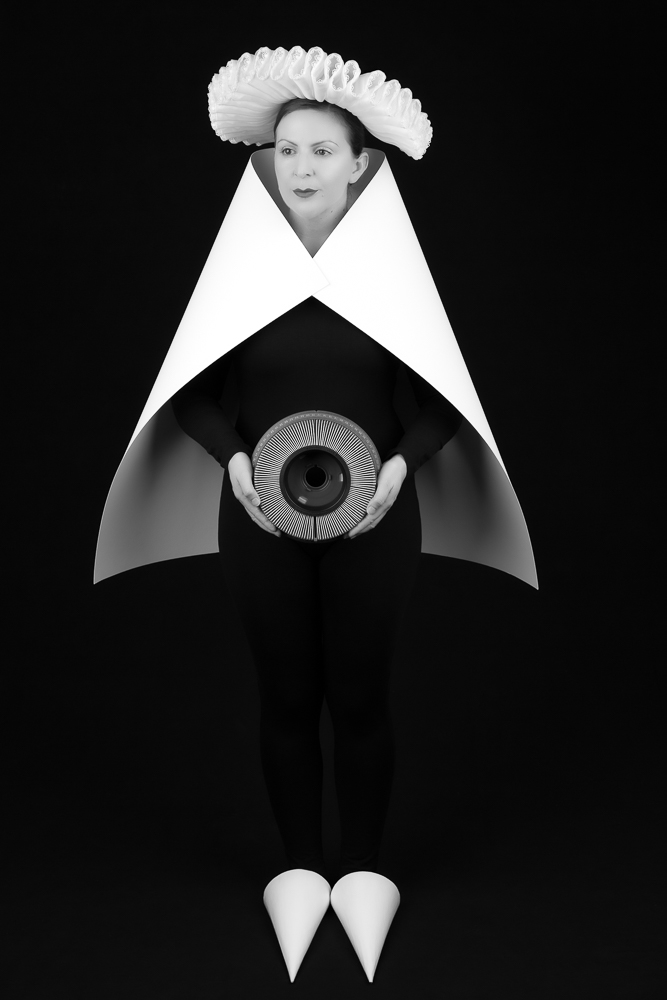 ©Brandy Trigueros, Home Theater, 2017 The collapsed iris of the Kodak Carousel represents a very specific time when people would document their experiences, yet this was the home theater if you had the money. 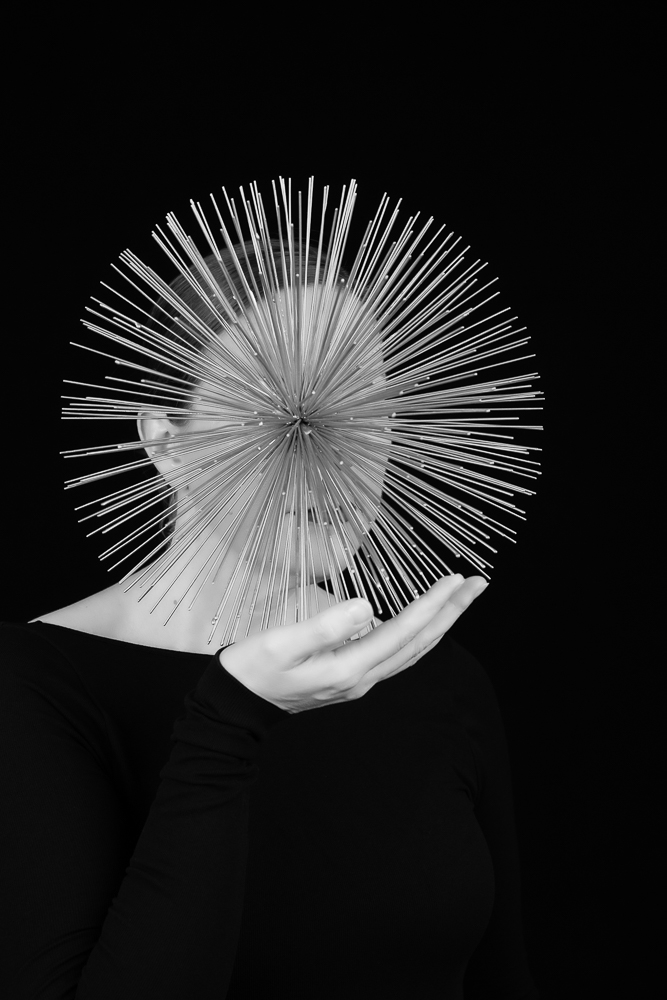 ©Brandy Trigueros, Facial Unrecognition, 2017 What does it mean to be perceived as human? 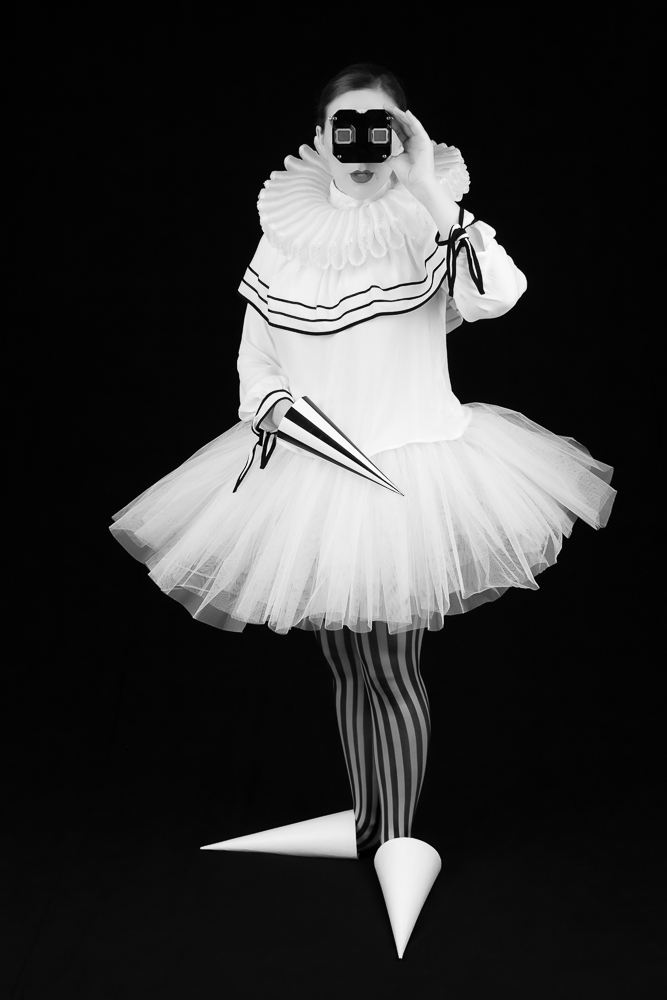 ©Brandy Trigueros, Virtual Reality, 2017 In a computer simulated society technology becomes an appendage or extension of the body, in this case artificial retinas. “Inside, it’s another world!” –View-Master ad slogan 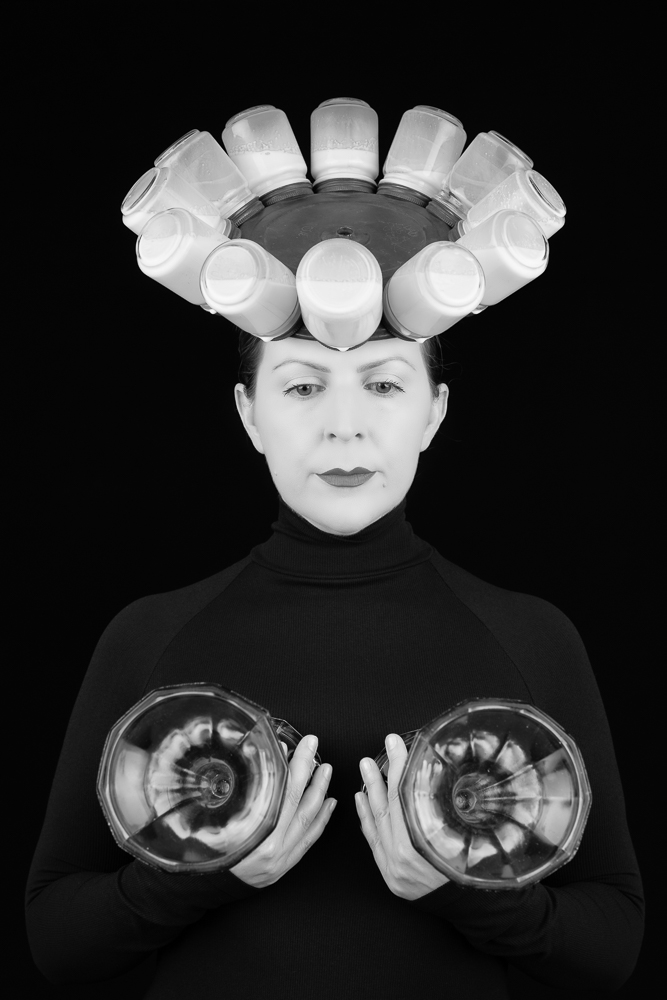 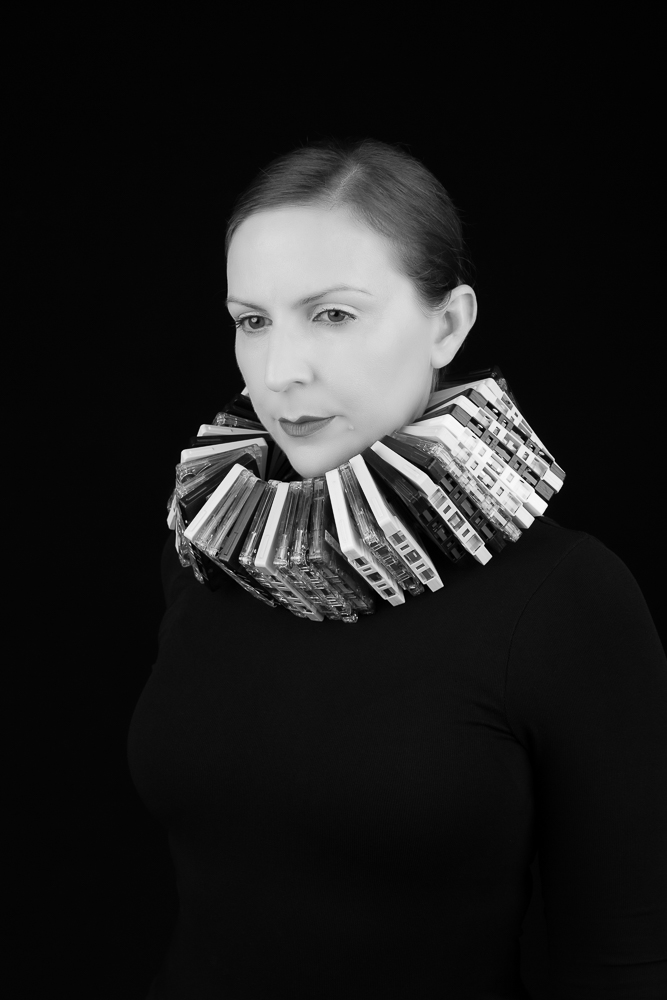 ©Brandy Trigueros, Royal Mixtape, 2017 The Elizabethan ruff collar is being used as a trope, a fashion construct of the elite and ruling class. An aesthetic that was alluring yet trapping: a collapse of monarchy, of democracy and a reshaping of female bodies. Also, there is a collapse of technologies: the cassette, which replaced another tape of cassette which then replaced the reel-to-reel, which replaced vinyl, which replaced wax. 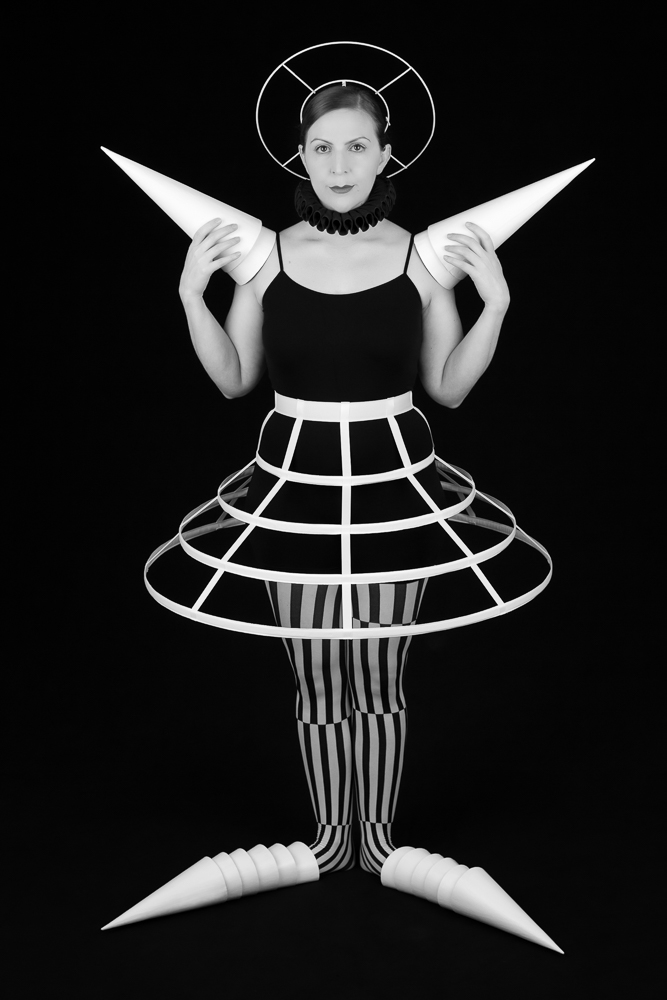 ©Brandy Trigueros, Saint Algorithm, 2018 The idea of a theology where God is replaced by the algorithm. 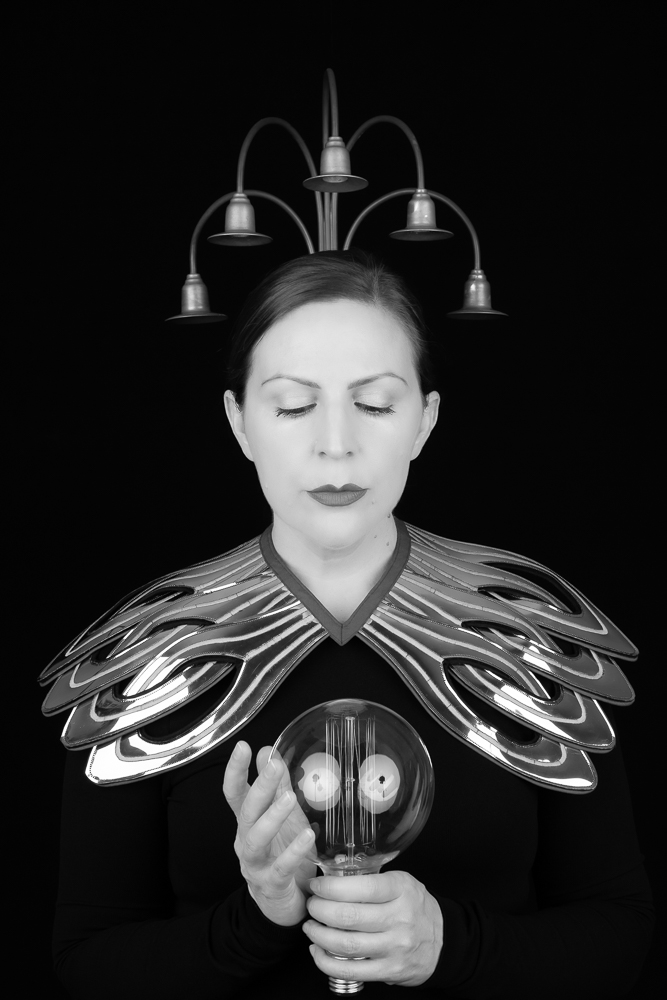 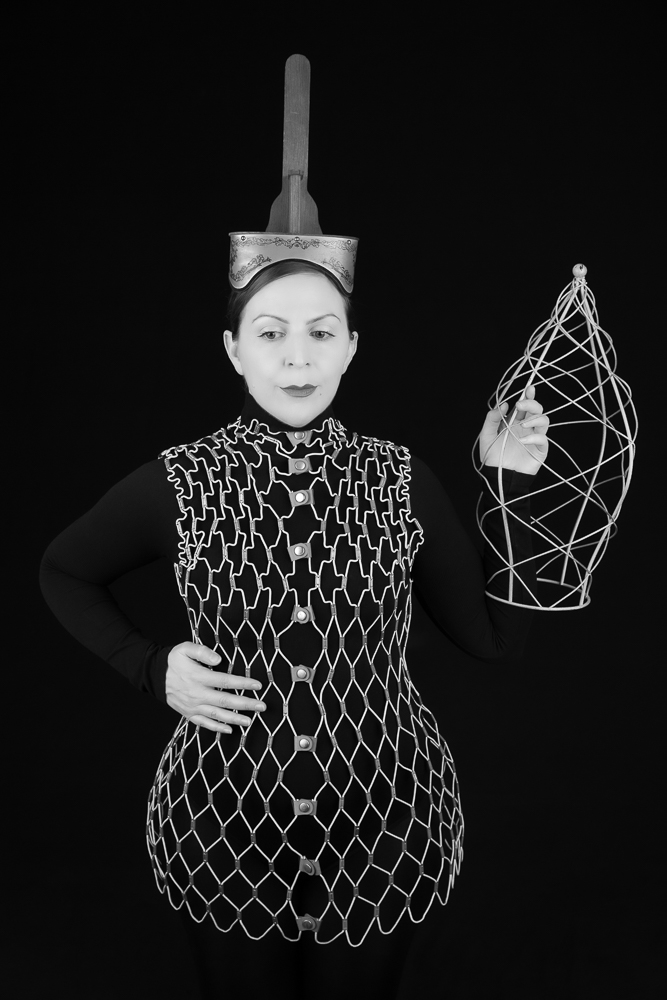 ©Brandy Trigueros, Exoskeleton, 2018 Throughout the exponential evolution of technology it has been used for both war and humanitarian causes, to both empower and disempower. 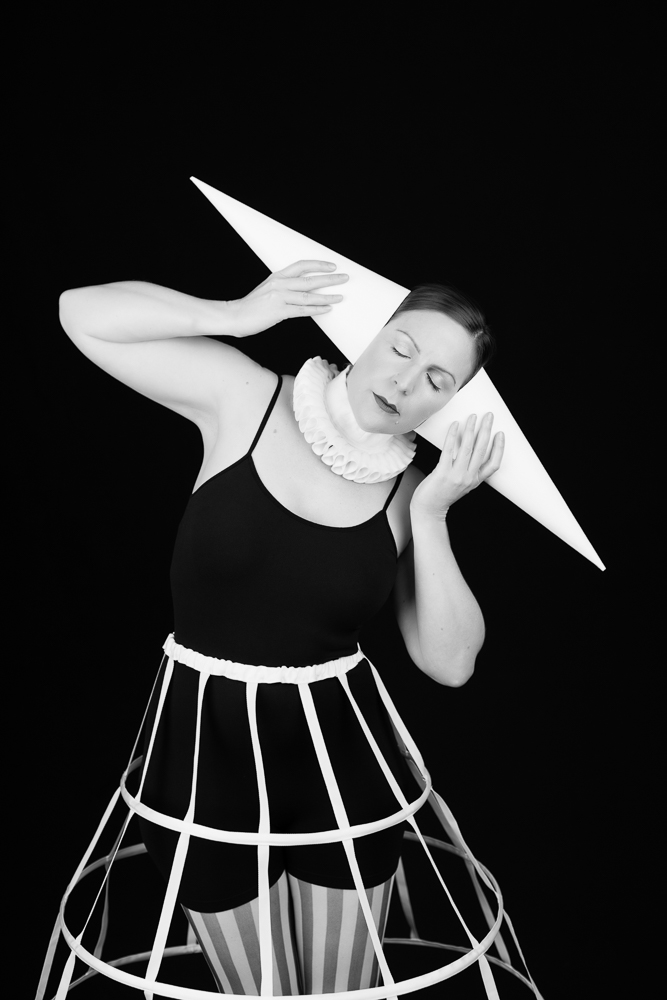 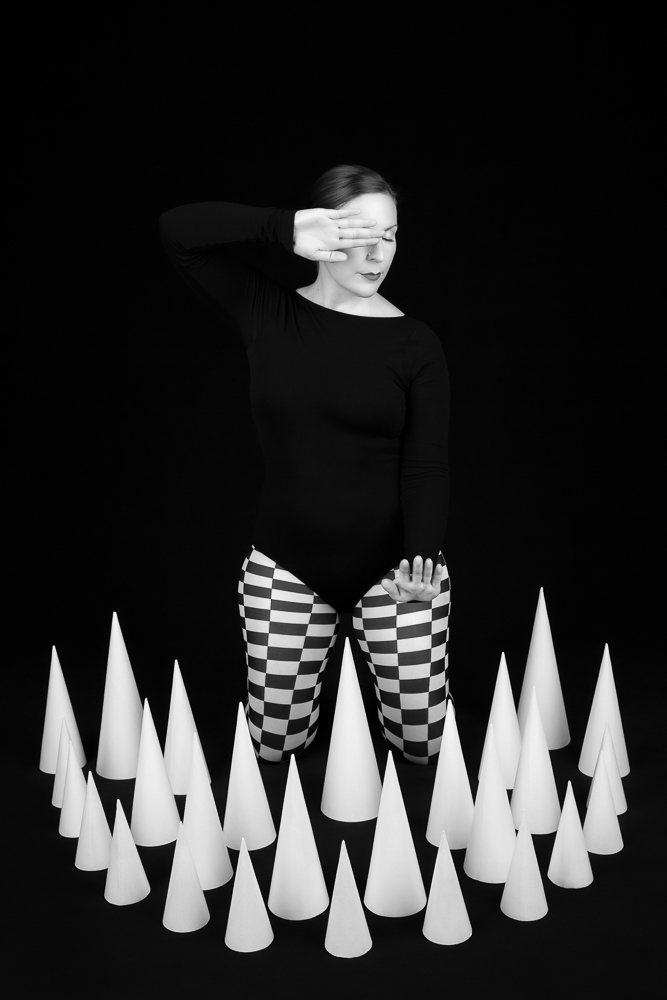