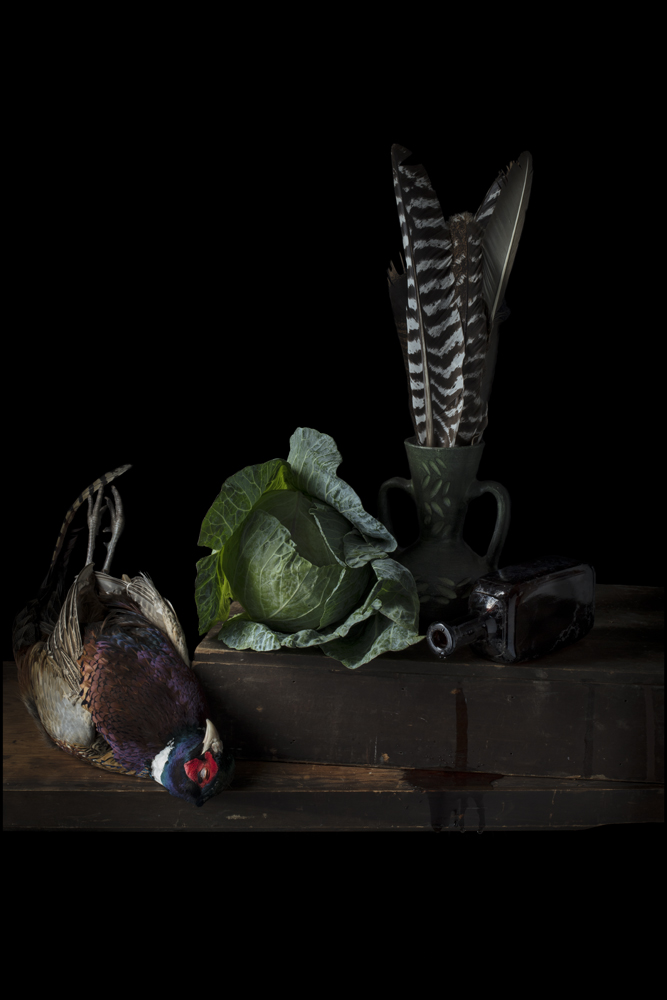 I no longer fear beauty.  These days, I can use as much beauty as I can find in the world. – Kimberly Witham

It gives me tremendous pleasure to present a week of New Jersey photographers, all selected by New Jersey States Project Editor Kimberly Witham. I have been a long time devotee of her work, discovering it online and then later seeing it in exhibition at Gallery Kayafas some years ago in Boston. In addition to being an Associate Professor of Photography at Bucks County Community College, she teaches workshops at the Santa Fe Photo Workshops (a new one coming up in July 2019), and I had the privilege of taking a weekend intensive at the Los Angeles Center of Photography this past Spring. Watching her process, being wowed by her floral explosions, and learning about light that informs every inch of the tableau was, needless to say, a complete treat.

Kimberly’s work is based in the traditions of the Dutch Masters, but brings her own sensibilities to her sumptuous, timeless photographs. Much of the flora and fruit is grown on her property and she has mastered the art of taxidermy, sometimes created from local road kill.  The result is work that is contemplative, celebratory, and well, simply beautiful, with a nod towards memory and metaphor.

With all of this said, I am excited to have her as this week’s editor and look forward to learning more about photographers working in a state that is much more than a shoreline celebrated on reality tv.

Kimberly’s photographs can also be appreciated on her instagram: @kimberlywitham. An interview with Kimberly follows.

Kimberly Witham is an artist and educator who currently resides in Glen Gardner, NJ. Kimberly was born and raised in Wakefield, Rhode Island. She earned a BA in Art History from Duke University and an MFA in photography from the University of Massachusetts-Dartmouth. Her photographs are strongly influenced by her studies in art history and her interest in the natural world. Since moving to New Jersey in 2006, her work has focused on the relationship between humans and wildlife. Her still life images include road kill animals, yard sale items, and flowers and fruit (often grown in the artist’s own garden). Her work has been featured in Color Magazine, PHOTO+, BLOW photo, The Photo Review, BLINK, Foto, Orion and Wired (online) and has been used as cover illustration for books in the US and France. In 2016, National Geographic created a short film about Kimberly’s studio practice entitled “Making Roadkill Into Art.” She has won awards and grants including the Feature Shoot Emerging Photography Award, a fellowship at the Center for Emerging Visual Artists, an Honorable Mention for the Clarence John Laughlin Award and the Lindback Distinguished teaching award. Her work has been shown in solo and group exhibitions in the United States and abroad and is held in numerous private collections. Kimberly is an Associate Professor of Photography at Bucks County Community College. Kimberly also teaches specialized workshops in still life photography and lighting including an upcoming class at the Santa Fe Photographic Workshops in Summer 2019. 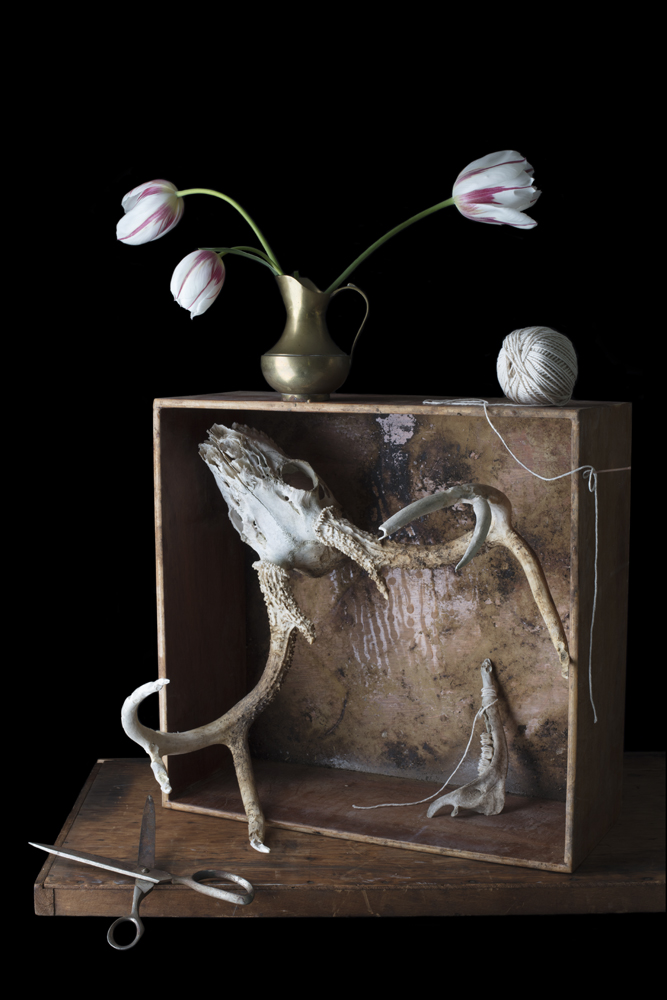 I am sharing images from three different ongoing projects: The Laid Table, And Some in Dreams and On Beauty.

These photographs are a very personal meditation on beauty, fecundity, fragility and the inevitable march of time. The visual language of these images is borrowed from classical Dutch still life painting. In these paintings flowers, fruit, and flesh are represented in varying states of ripeness and decay. These paintings serve as both a celebration of beauty and a reminder of the inevitability of death. They are simultaneously seductive and grotesque. The materials used in my images are all culled from my surroundings. The flowers and vegetables are from my garden. The animals and birds are all road kill found close to my New Jersey home. The ephemeral nature of my subject matter requires me to work only with what is available on any given day. – Kimberly Witham 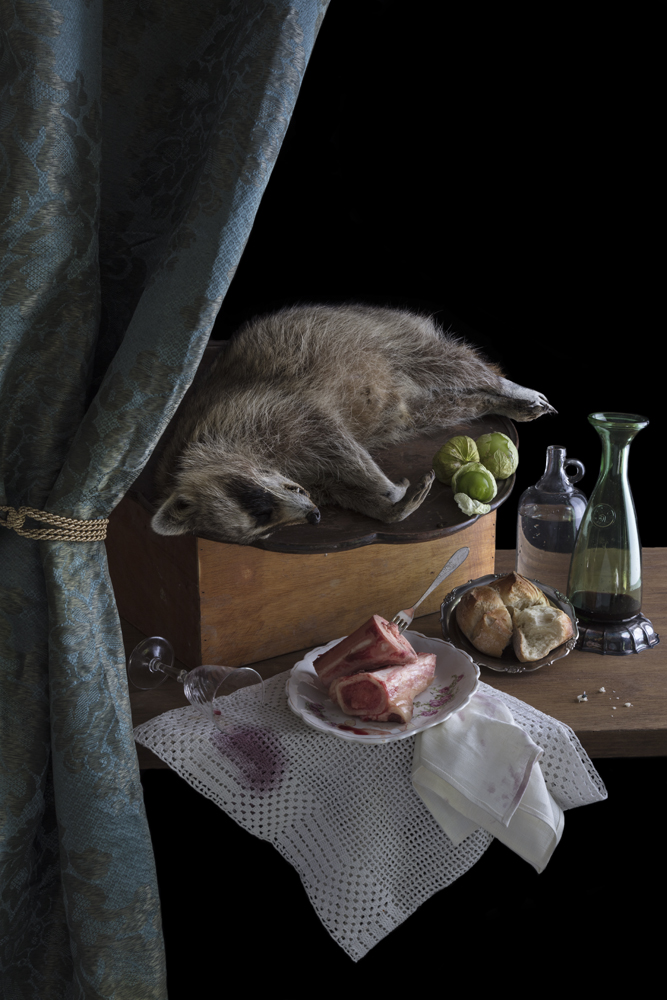 I was born and raised in Rhode Island and I am still a Rhode Islander at heart.  My mom grew up in the Netherlands.  She is an artist and overall creative person.  My dad was an engineer who built huge boats in a barn in our backyard as a hobby. I am the middle of three children.  We had horses, chickens, dogs, cats and even (briefly) a pet crow.  As a child, I spent lots of time playing outside and lots of time around animals.  I was always interested in art, but I was also a bit of an academic, nerdy, type.  I studied art history as an undergraduate and briefly attended grad school in art history.  At some point, I decided I wanted to make art rather than write about it. I concluded that I would rather be a starving artist than a starving art historian. I dropped out of grad school and I started taking photos. I built a darkroom in my apartment and it snowballed from there.  While I took a winding road to my current path, I feel as if everything I have done up until this point informs my work. 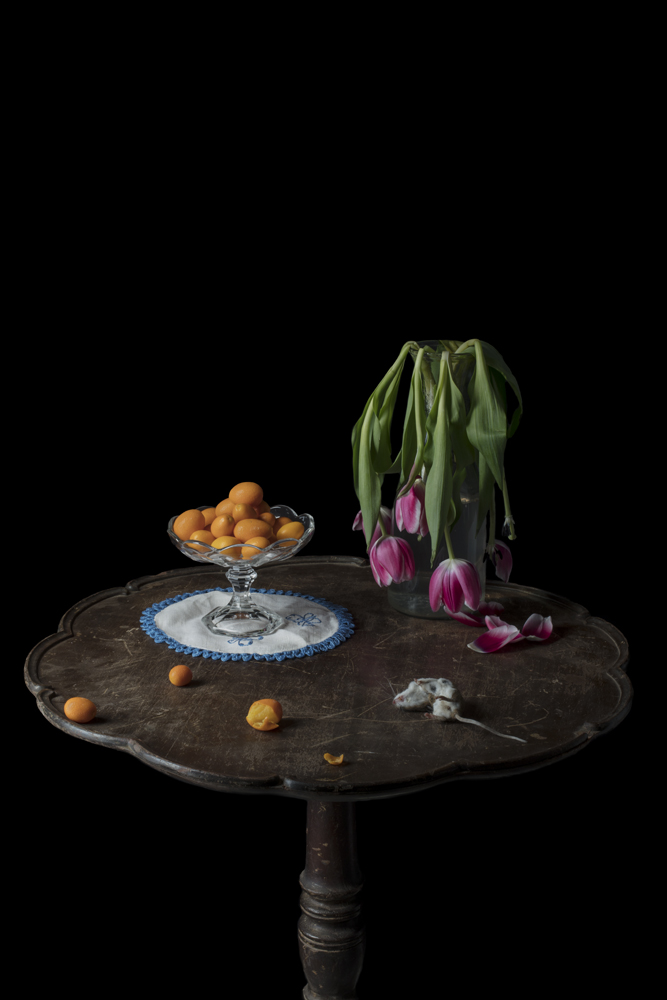 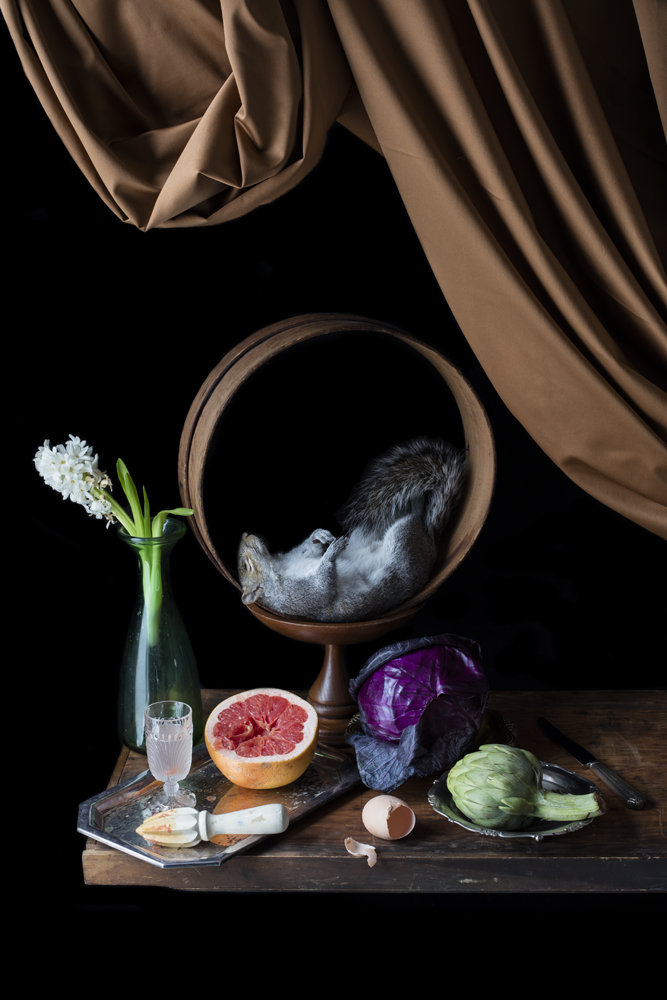 I don’t think about New Jersey as a haven for photographers, but your stellar line of of artists has me thinking differently. Tell us how you came to select the photographers this week.

To outsiders, New Jersey is a stereotype (I say this as a former outsider who LOVED poking fun at New Jersey).  If you have not spent time in New Jersey, you may imagine the state as a giant homogenous suburb or as an extended scene from the “Jersey Shore.”  While the state is suburban and does have many shore towns, it is also very rural in some areas and very cosmopolitan in others. It is more than just a turnpike!

I wanted the photographers I chose to express this diversity.  I love the contrast between Michael Massaia’s dreamlike depictions of the boardwalk at night juxtaposed with Tyler Haughey’s colorful, formal depictions of shore hotels.  As a fan of humor in art, I love the deadpan formalism of Amy Becker’s abandoned telephone kiosks.  In contrast, Kate Pollard Hoffman and Bill Westheimer create images that are much more abstract, experimental, emotional, and intuitive.  With the exception of Kate, I had never met any of these photographers.  It was great to have an excuse to get in touch and talk shop. 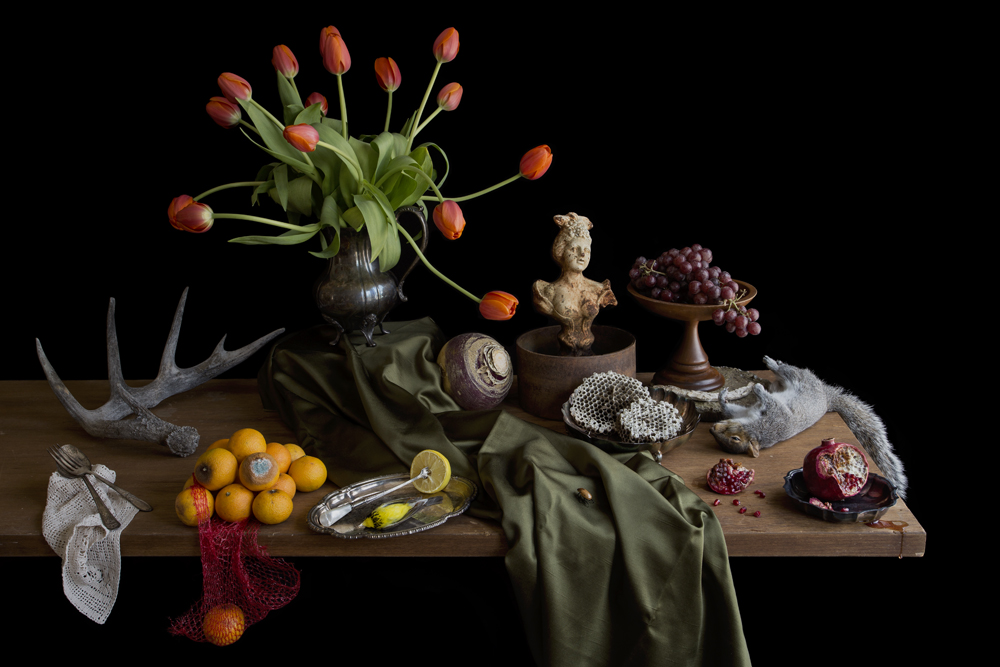 Does living in New Jersey affect or inform the work you make?

Absolutely.  When I moved to New Jersey from Brooklyn, I began life as a commuter.  As part of this process, I began to come across lots and lots of roadkill.  It had been a while since I had been in a position to see any wild animals regularly.  It was shocking to see so many dead creatures on a daily basis.  At the same time, my husband and I bought our first home.  It was a “fixer upper” so while I was seeing roadkill regularly, I was also focused strongly on creating a domestic space.  All of these influences came together in my first real still life project “Domestic Arrangements.”  There is no way I would have made that project (or any of the projects since) had I not moved to New Jersey.  Ironically, one of my biggest worries when I moved to New Jersey was that I would  lose my inspiration if I moved away from the New York art scene.  How wrong I was. 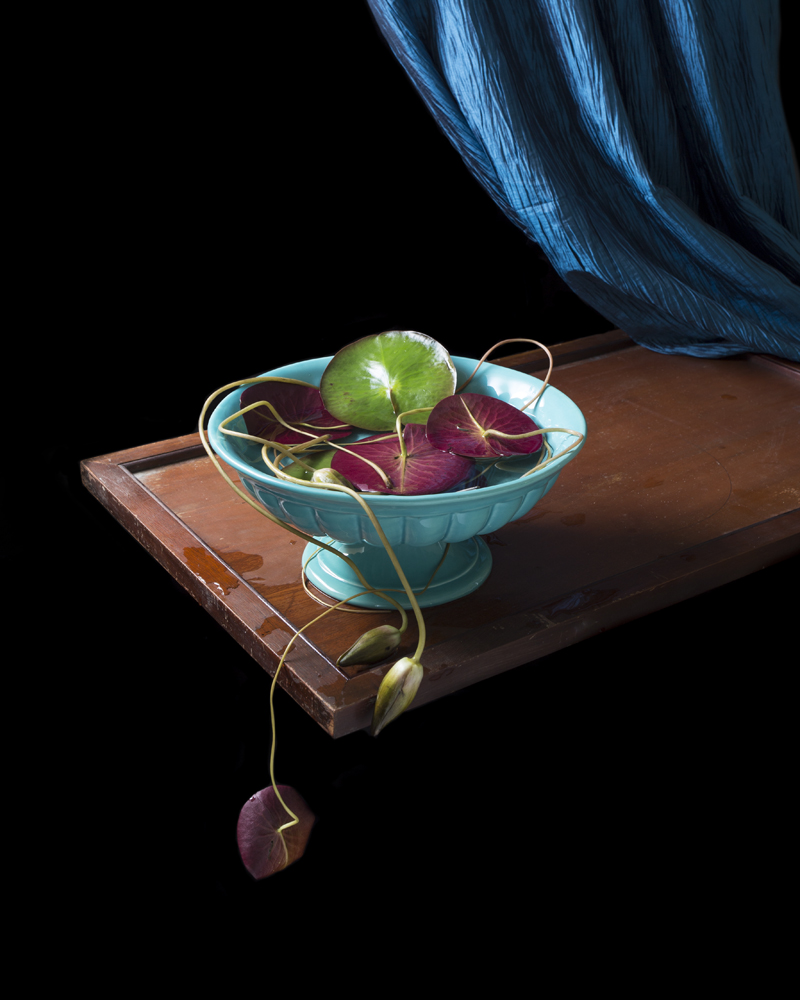 What drew you to creating still lifes?

As I mentioned earlier, it happened organically.  That being said, I think still life suits my personality.  I will admit that I am organized, meticulous and a control freak.  I am also an introvert at heart and love to spend time alone.  The studio allows me control over all of the aspects of the photograph.  “Making” photographs has always been easier for me than “taking” photographs.  Constructing still life images is very meditative for me.  I am also able to draw on my art history background and my genetic predisposition towards dramatic light (I assume it is in my Dutch DNA). 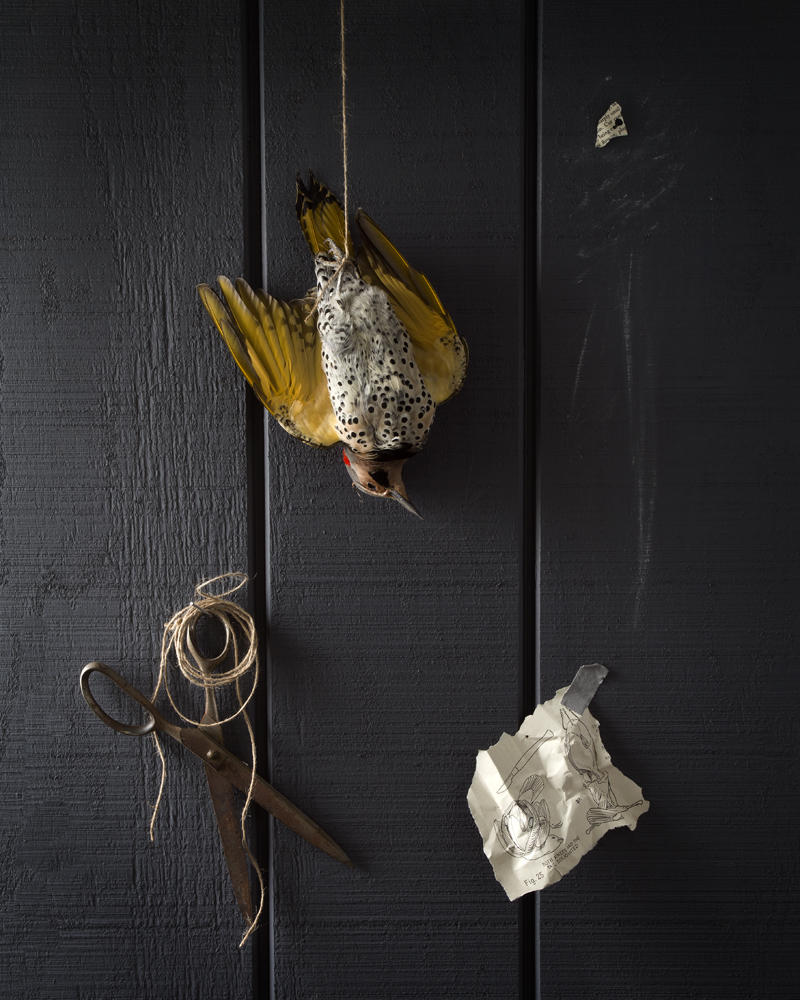 How has your work evolved over time?

Since I began making photographs seriously, my work has always been staged or invented in some way.  As time has gone on, I have worked on my craft, especially my use of light.  Lighting was initially terrifying to me, but now I work with light very intuitively and I think my work is stronger as a result. My work has also become much more personal over time.  While the personal stories are not there in a direct way the viewer may discern, I do think the emotional resonance of the images rings true.  Finally, I no longer fear beauty.  These days, I can use as much beauty as I can find in the world. 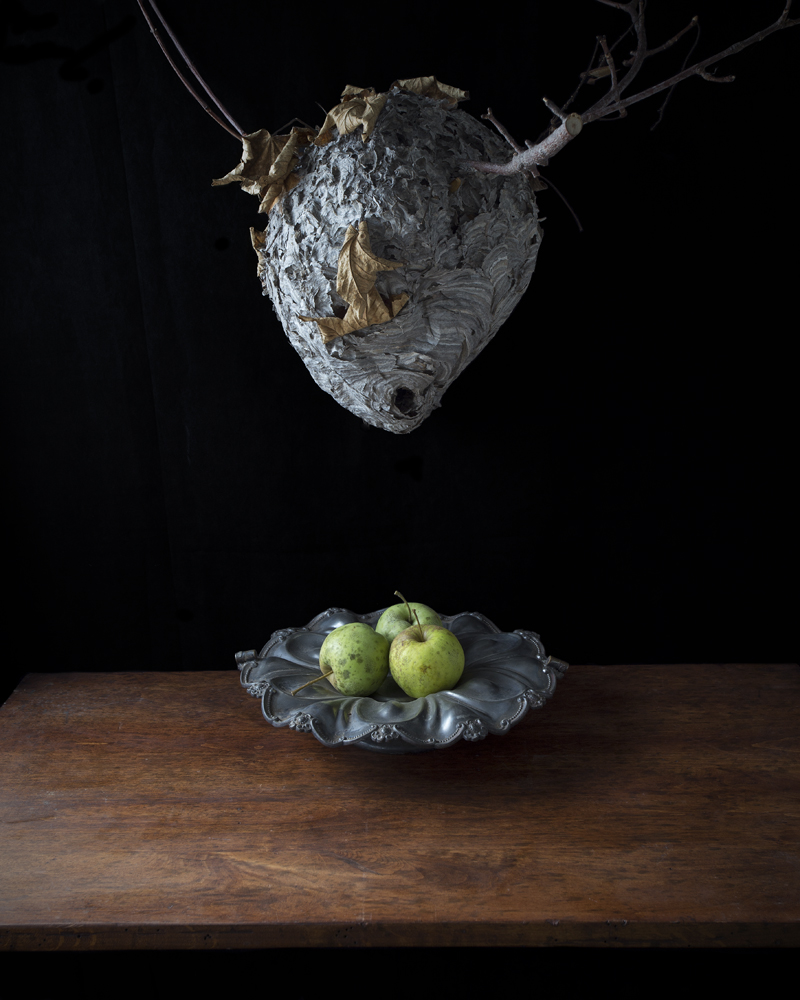 What keeps the photo fires going? What inspires you?

My friends and family have been incredibly supportive of my sometimes winding road in life.  My husband Walter Trarbach deserves a special shout out. He didn’t even blink when I announced I would attend taxidermy school and he is completely on board for all of my crazy schemes including my penchant for picking up road kill. . .

Like many artists, I obsessively collect things – seed pods, bones, old dishes and ephemera.  Anything from an interesting seed to a misshapen tomato can be the basis for a new image or idea.  My interest in art history continues to be a strong source of inspiration as well. 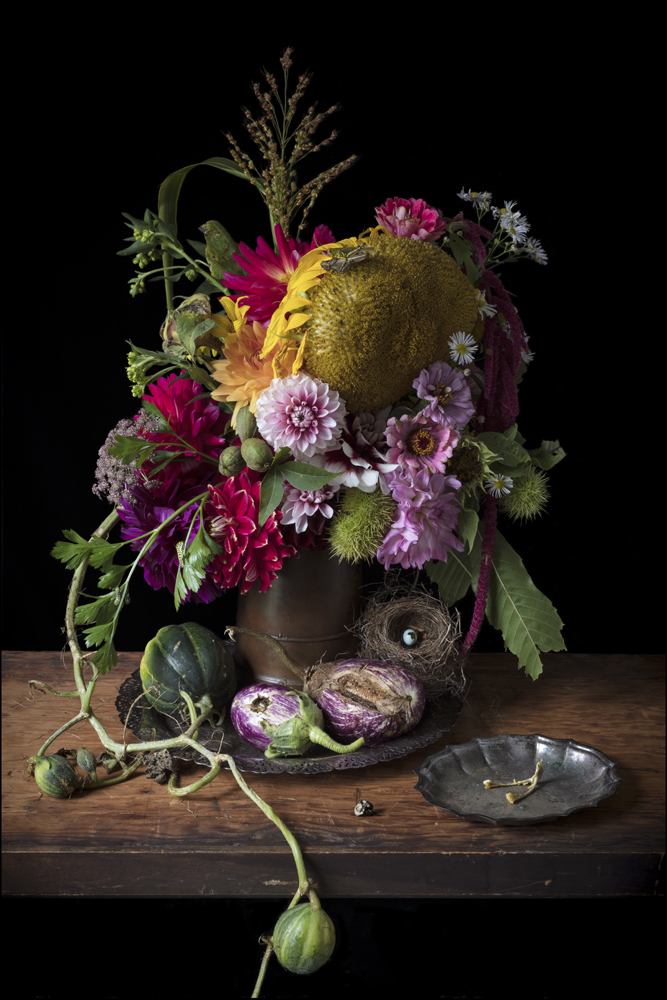 What was some of the best advice you’ve every received?

I have two answers here – but they are related.  The first is not a piece of advice so much as a life philosophy.  My parents instilled my siblings and I with the belief that it is better to try and to fail than not to try and to be left with the question “What if?”  There were MANY times in my career where giving up would have been the sensible thing to do but I persisted.  I credit my parents for that one.

Second piece of advice:  during my last semester of my MFA program, I applied for many grants, residencies, etc.  I was rejected from every last one.  I was having a pity party when one of my thesis advisors (the amazing photographer Victoria Crayhon) entered the conversation.  She rolled her eyes at me and said with no pity “You are an artist, it is your job to get rejected!”  Now when I receive rejection letters, I just think I am doing a really good job. 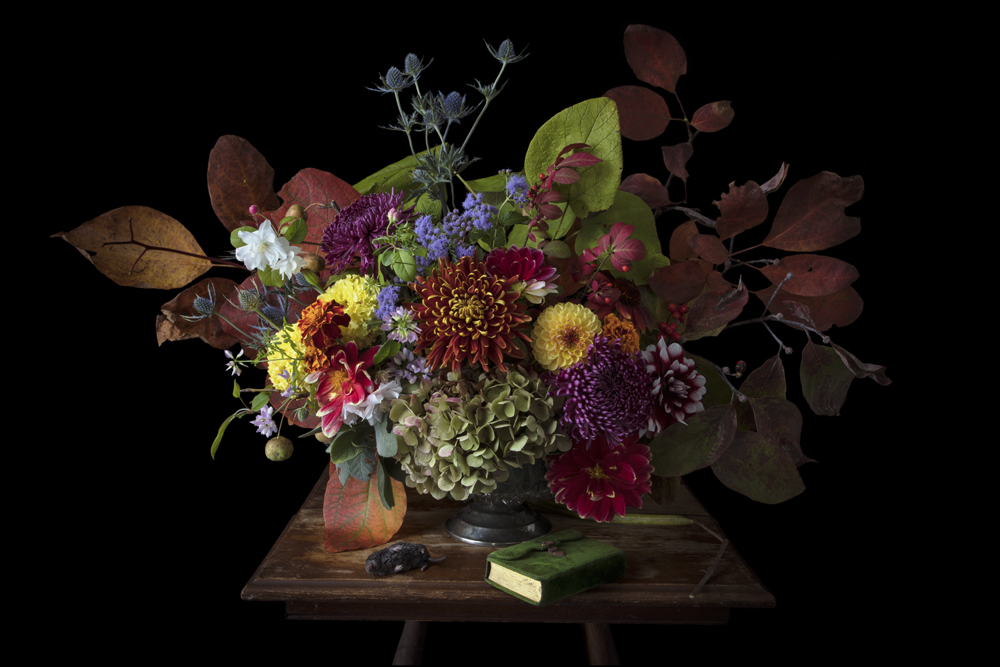 I get up early, have coffee with my husband, son and dogs.  I take a long run.  I take a stroll in my garden and then I work in the studio for several hours before making something fabulous for dinner.  Bonus points if dinner came from the garden! 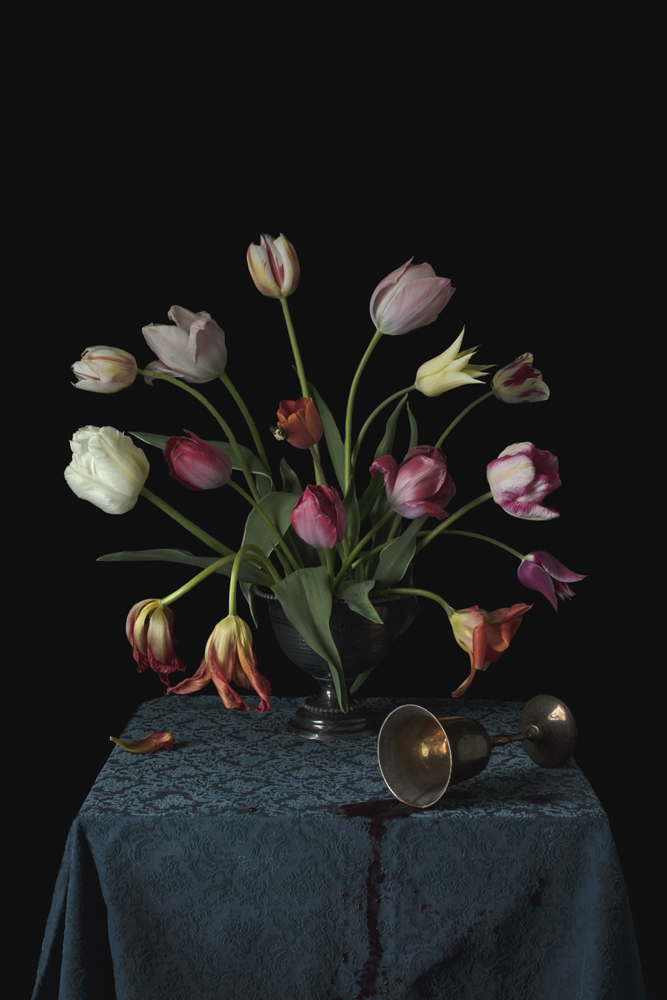 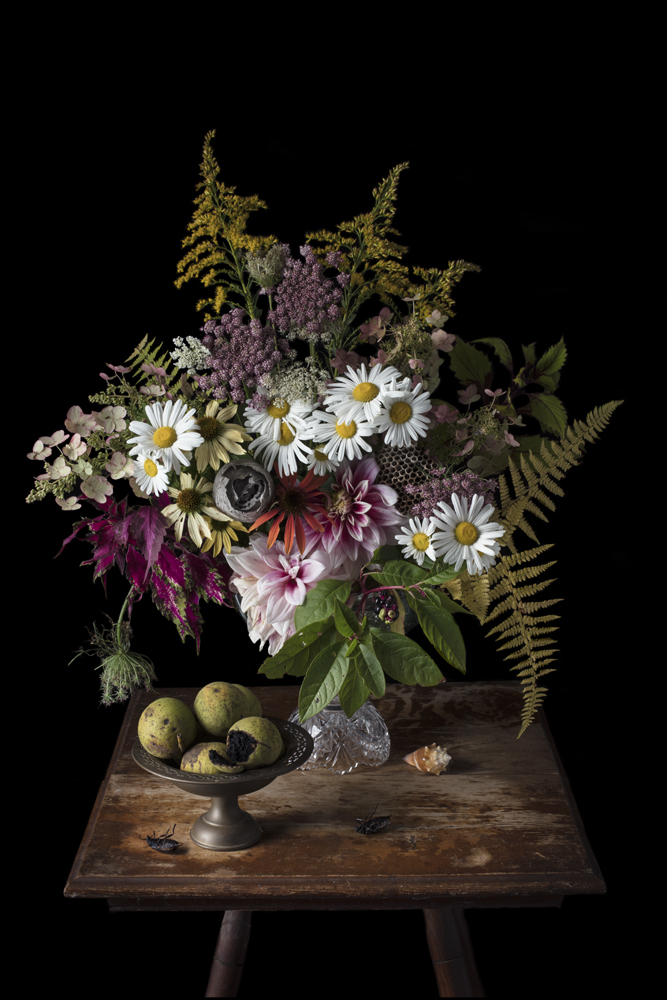 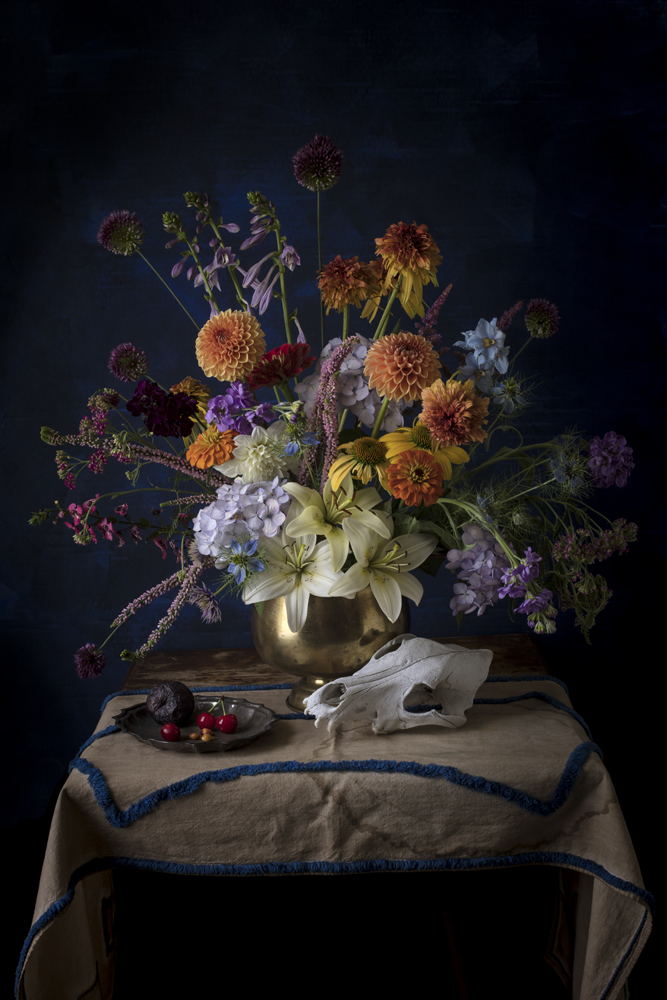 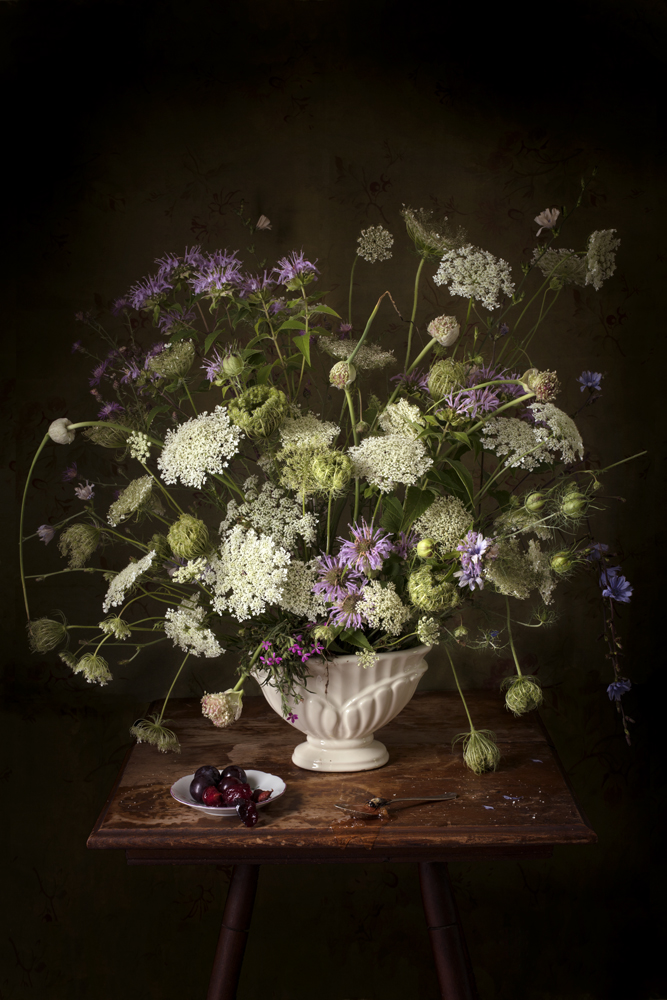