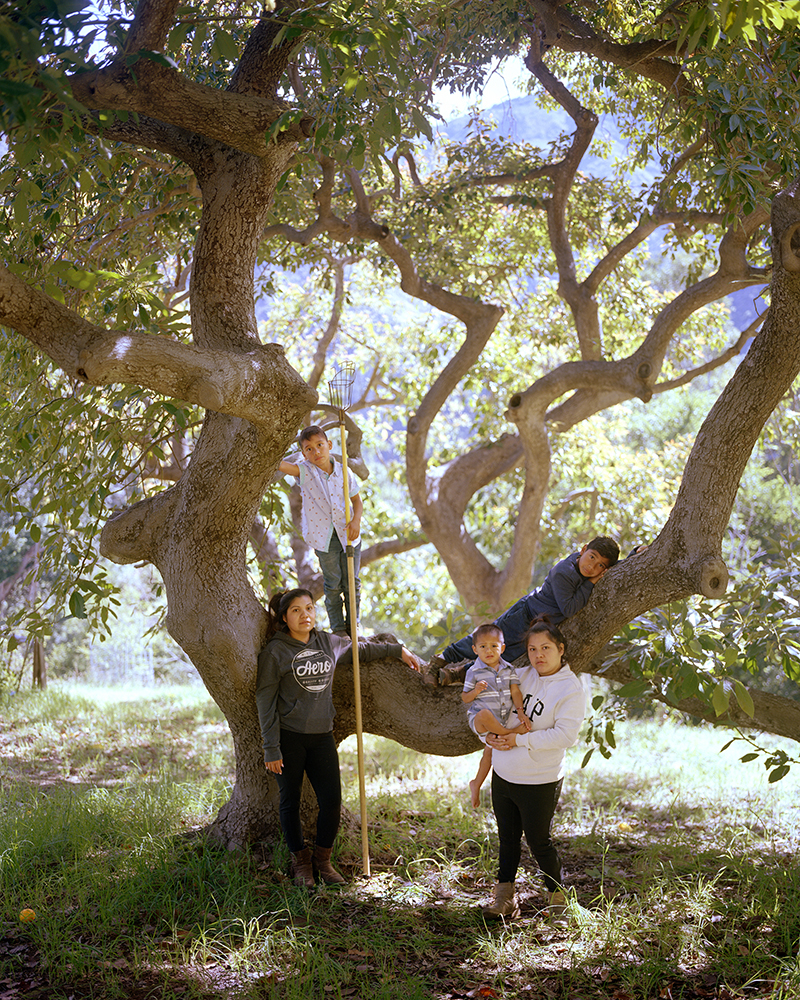 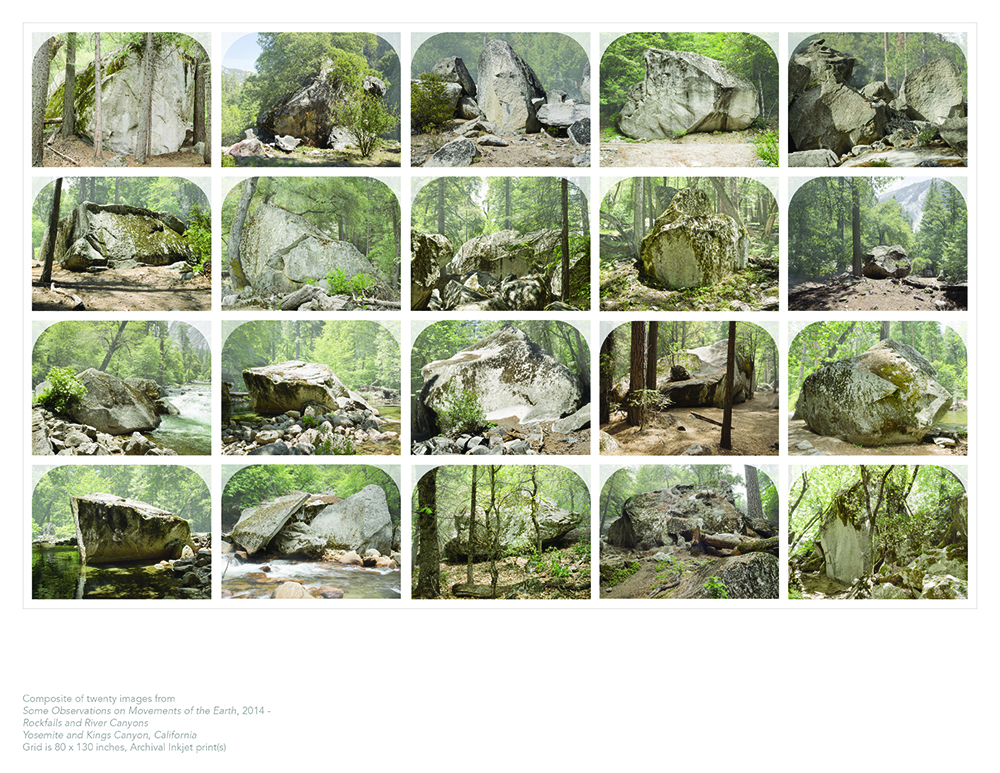 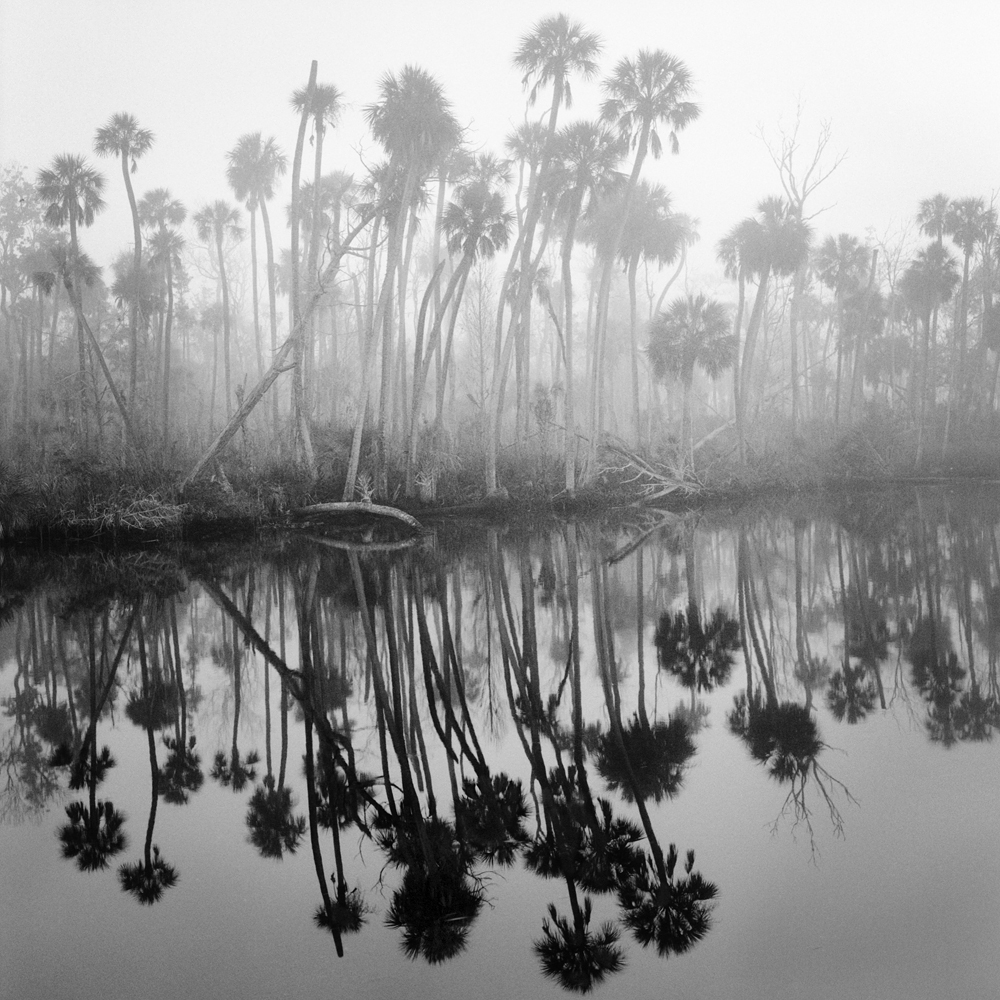 Museum Director James Pearson of the  Southeast Museum of Photography has created a significant exhibition focused on the most important issue of our time. This is Climate Change features the projects of three photographers: Kirk Crippens, Sharon Harper, and Benjamin Dimmitt and it runs through October 26, 2019 with a Reception, including a panel talk by the photographers and a book signing by Kirk Crippens: October 3, 2019 5:00 PM. The fascinating perspective taken by the Director is to explore climate change not as a primary element of the composition, but as a now inescapable feature of landscape photography.

The narrative surrounding climate change, contemporary society’s most pervasive topic, has been wildly manipulated. In the face of near unanimous backing by the scientific community, individuals, groups, and entire industries doubt or outright denounce the relationship between human-driven carbon emissions and the negative impact of carbon emissions on environments across the globe. In response to the near unanimous backing by the scientific community on the causes of global climate change, individuals, groups, governments, and entire industries have instituted real change in energy production and usage. From radical environmentalists and reactionary politicians, to grassroots activists and corporate marketing firms, the concept of climate change has been weaponized, demonized, monetized, and sensationalized; climate change has either been adopted, evaded, or manipulated to fit some agenda somewhere.

This is Climate Change, a photography exhibition curated and developed by the Southeast Museum of Photography, aims to reveal the physical effects of climate change through landscape photography with a fine art emphasis. Taking this approach, the exhibition aims to deliver the dramatic effect of climate change through subtlety, through studied and composed imagery, free of sensationalism, free of emotional or data manipulation. The exhibit aims to deliver clear examples of the irreversible deterioration of the landscape free from overt or obvious pollutants, free from vilification. 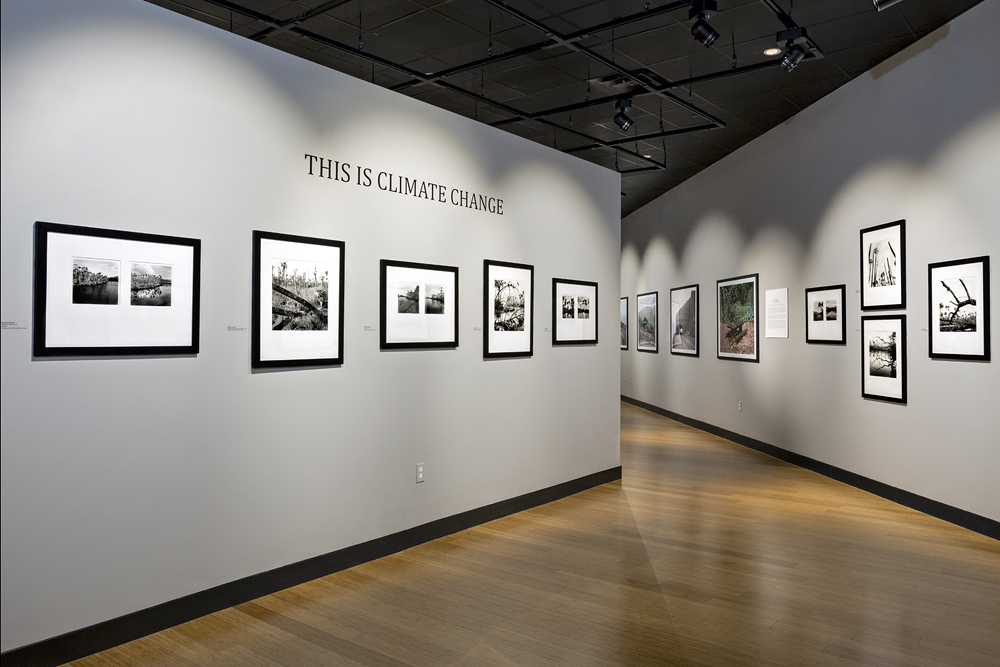 ©Benjamin Dimmitt, installation of This is Climate Change

As the Director and curator of a photography museum attached to a college I am given the opportunity to interact with the student body, the immediate community, and the world at large through digital media. These interactions are designed as photography exhibitions, lectures, film screenings, workshops, family activities, and other educational engagements. I have support from our parent institution, Daytona State College, a dedicated audience, and a truly magnificent venue. This is my platform, and I use it to pursue our mission of teaching and learning.

When I decided to do a show addressing climate change I intentionally strayed away from the kind of imagery most people would assume it would include; starving polar bears, melting ice-caps, flooded city streets. In fact, the title of the exhibit is the only direct reference to climate change. This is a fine-art landscape photography exhibition, with contributions from some of the most talented photographers in the country—they are not eco-warriors with cameras, they are not photojournalists, their work is not about sensationalism nor do they have political agendas apparent in their photos.

In landscape photography, climate change is now a feature and no longer just a bug.

Sharon Harper’s composed portraits of fallen boulders, conversing in the gallery space with her capture of natural and artificial debris comingling on riverbanks cannot be seen separately from the increased frequency and intensity of hurricanes. These are movements of the earth occurring over eons, situated with new movements occurring at a rapidly accelerated pace.

Benjamin Dimmitt did not intend to document the slow turn of a freshwater spring into a saltwater marsh, but by returning to his favorite haunts to photograph he captured exactly that. While salinification is a natural occurrence, the acceleration of this phenomena due to rising sea levels illustrates how quickly the climate is changing, and Dimmitt’s photos expose how susceptible fragile ecosystems are to increased carbon emissions.

With the Pacific Coast Highway closed to vehicle traffic, Kirk Crippens grabbed his large format camera and went in pursuit of atmospheric rivers; his adventure was captured in Going South: Big Sur, recently published by Schilt. In Going South, Crippens captured the United States’ most iconic roadway from an angle that has never before been seen; there were no cars. Wildfires led to mudslides that effectively cut off access to US1, and Crippens captured an eerie and lonesome landscape with vibrant color and impeccable composition.

The physical alterations occurring on our planet as a result of human accelerated climate change are undeniable; they have been scientifically verified and now even the anecdotal evidence cannot be easily dismissed. And yet, those with a vested interest still resist industrial, legislative, or other modifications to their investment—after all, modifications in the best interest of the planet are not necessarily in the best interest of capital gains. These powers deflect responsibility and shift blame, and with crafty marketing they have the country convinced that if we all switch from plastic to paper straws this will have some actual effect on the direction and velocity with which the planet is hurtling toward conditions unsafe for human habitation.

How do you fight such an entrenched ideology and limitless wealth in an age where our government sanctioned the notion that money equals speech? I don’t know the answer. But the best I can do is to use whatever tools I have on hand. I run a museum, we exhibit photography and invite people in to talk about it and learn from it. Climate change found its way into photography, I’m using my platform to address it. 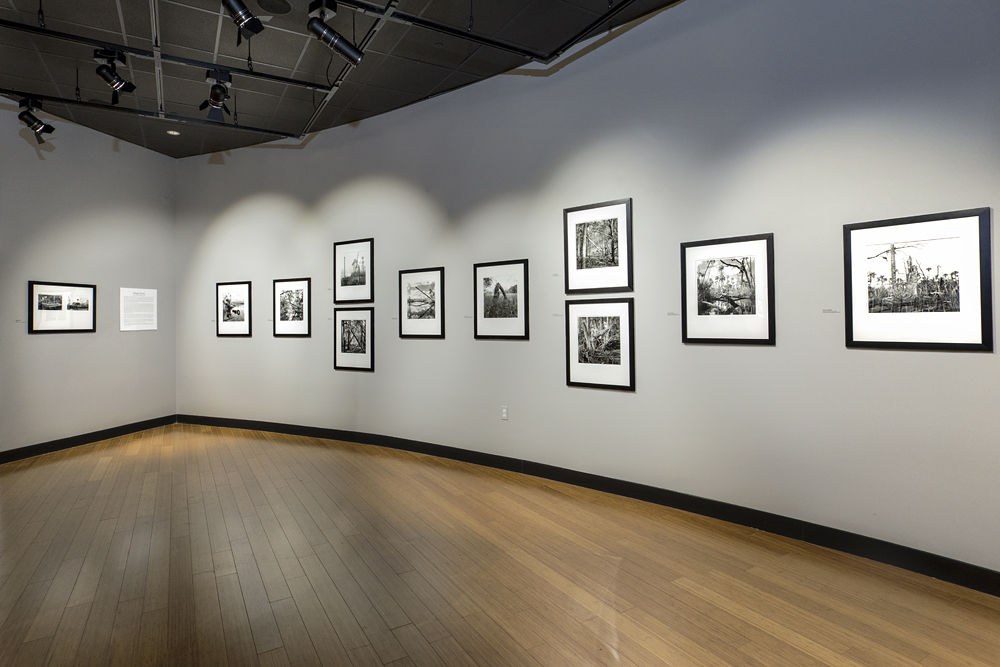 Install of Benjamin Dimmitt’s project, from the exhibition This is Climate Change

The Southeast Museum of Photography is a department of Daytona State College, providing exhibitions, workshops, lectures, film screenings, and other educational engagements on campus and throughout Central Florida. In its 40-year history the museum has developed a collection of over 5,000 photographs and objects relating to photography that support a teaching and learning mission. The museum, located on the campus of Daytona State College, is open year-round and all offerings are free and open to the public.

The Director of the Southeast Museum of Photography, James Pearson, has an undergraduate education in studio art and an advanced degree in Art History Criticism. In his capacity as Director and Curator, Pearson strives to incorporate internationally acclaimed photographers and contemporary issues into the exhibit and engagement offerings of the museum, while challenging his audiences to experience and question the medium of photography and the role of photography in the visual arts. 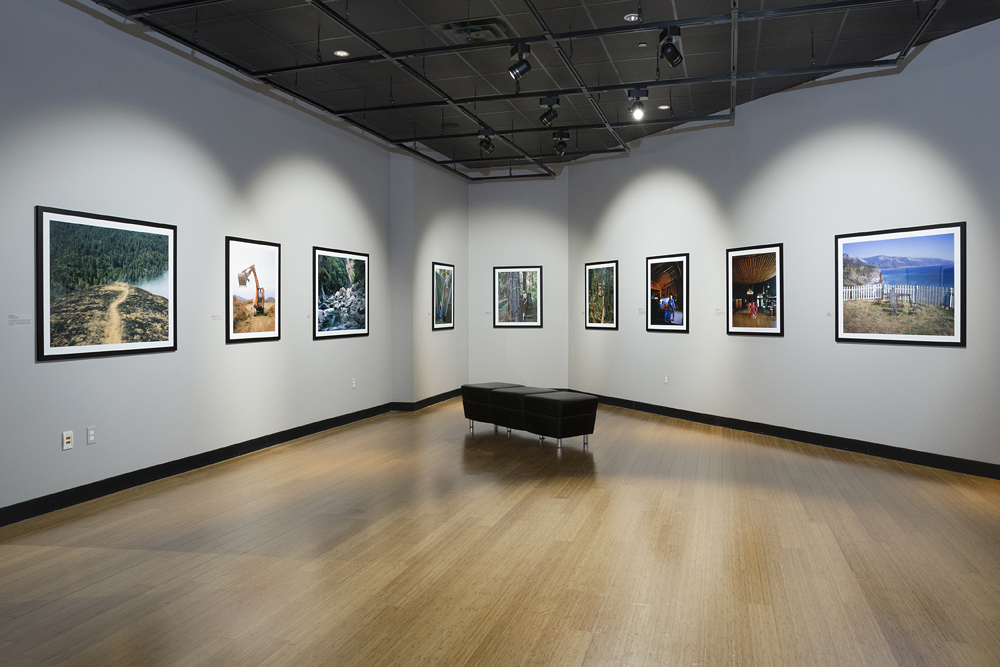 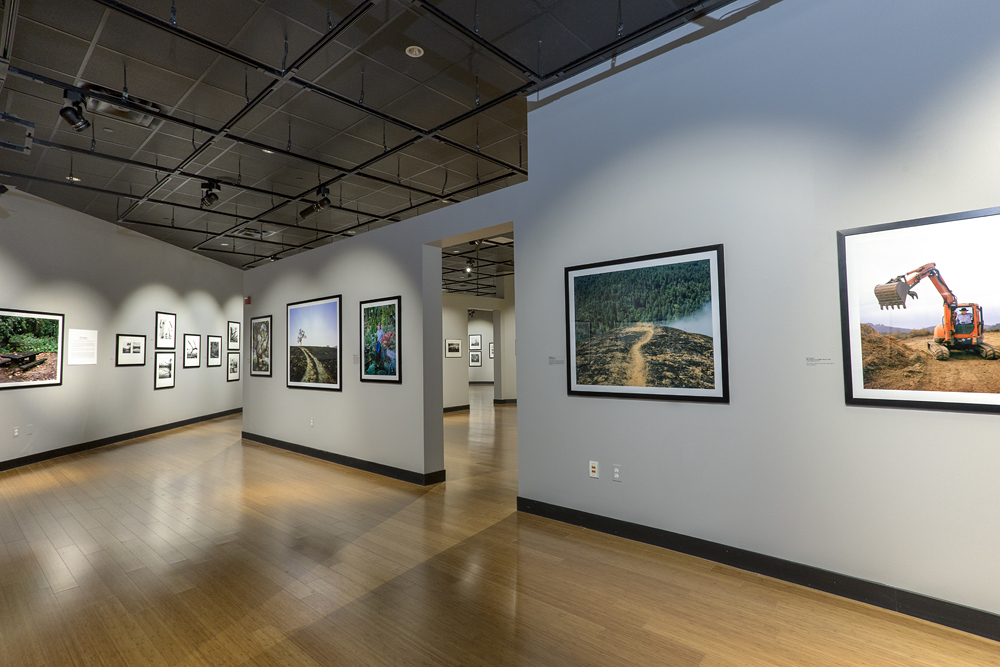 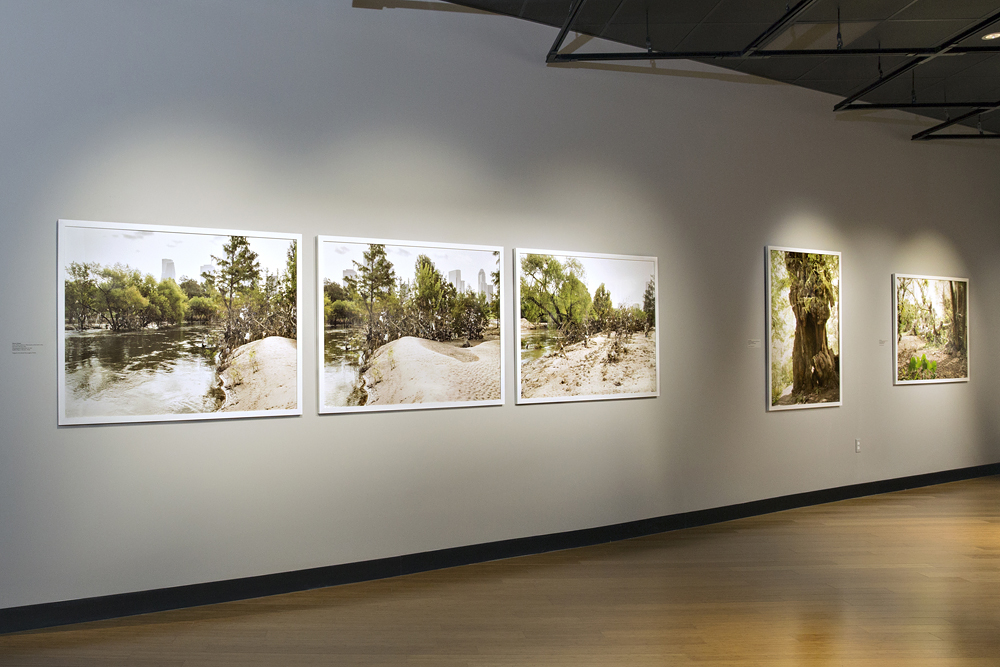 Crippens most recent project, Going South: Big Sur, published by Schilt in the Spring of 2019. This portfolio of images were created in the days following the closure of California’s secion of State Route 1 due to heavy mudslides. Crippens hiked into Big Sur–as all vehicle traffic was forbidden–and with his large format camera he began to document portions of the road and the surrouinding wilderness free of human interaction. The results of his excursion are breathtakingly beautiful imagery, a very distinct light and tone, and an almost apocalyptic sense of lonliness.

Kirk Crippens is an American artist living in the San Francisco Bay Area. He had an early start with photography, inspired by his grandfather who kept a darkroom in his closet. Based in San Francisco since 2000, he began exhibiting in 2008. In 2010 he exhibited in thirteen shows, three were solo exhibitions. He was named Top 50 Photographer in Critical Mass, nominated for the 2011–2013 Eureka Fellowship Program, and invited to speak during PhotoAlliance’s Spring Lecture series at the San Francisco Art Institute. In 2011 he was included in eighteen exhibitions, three were solo, named Top 50 photographer for the second consecutive year, and a finalist for Photolucida’s book prize. In 2012 he was the artist in residence at RayKo Photo Center in San Francisco and participated in ten exhibitions. In 2013 he was the artist in residence at Newspace Center for Photography in Portland, Oregon. His portfolio Foreclosure, USA was recently collected by the Crystal Bridges Museum of American Art in Bentonville, Arkansas and was featured in their exhibition State of the Art, Discovering American Art Now in 2014-2015. 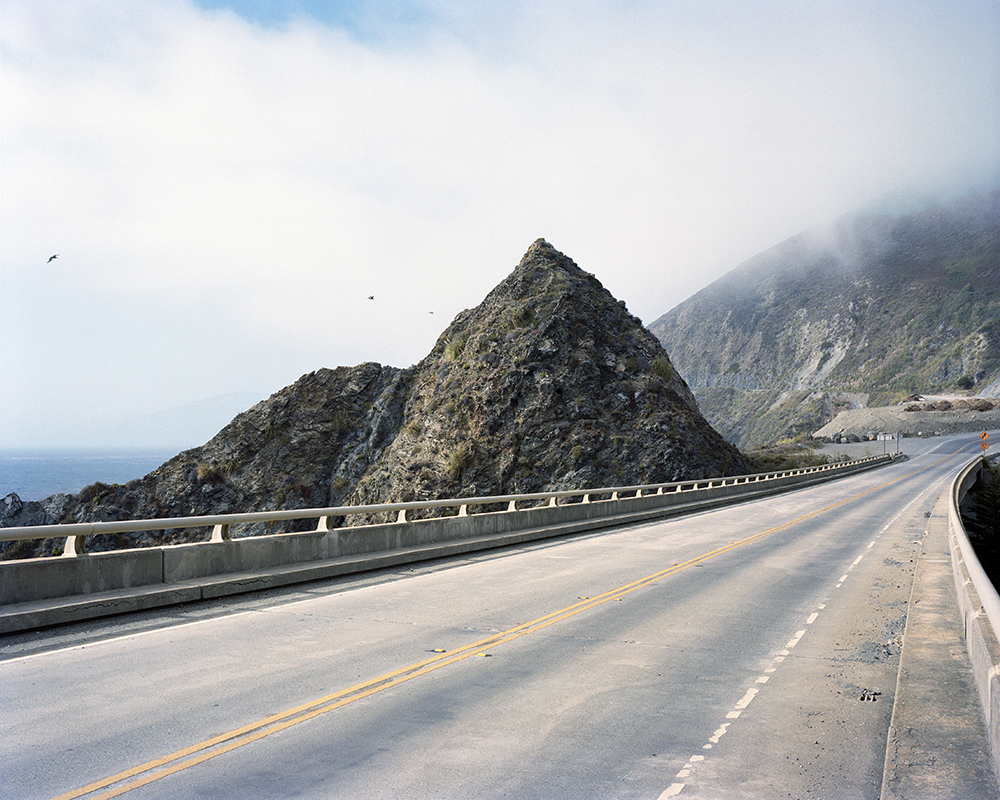 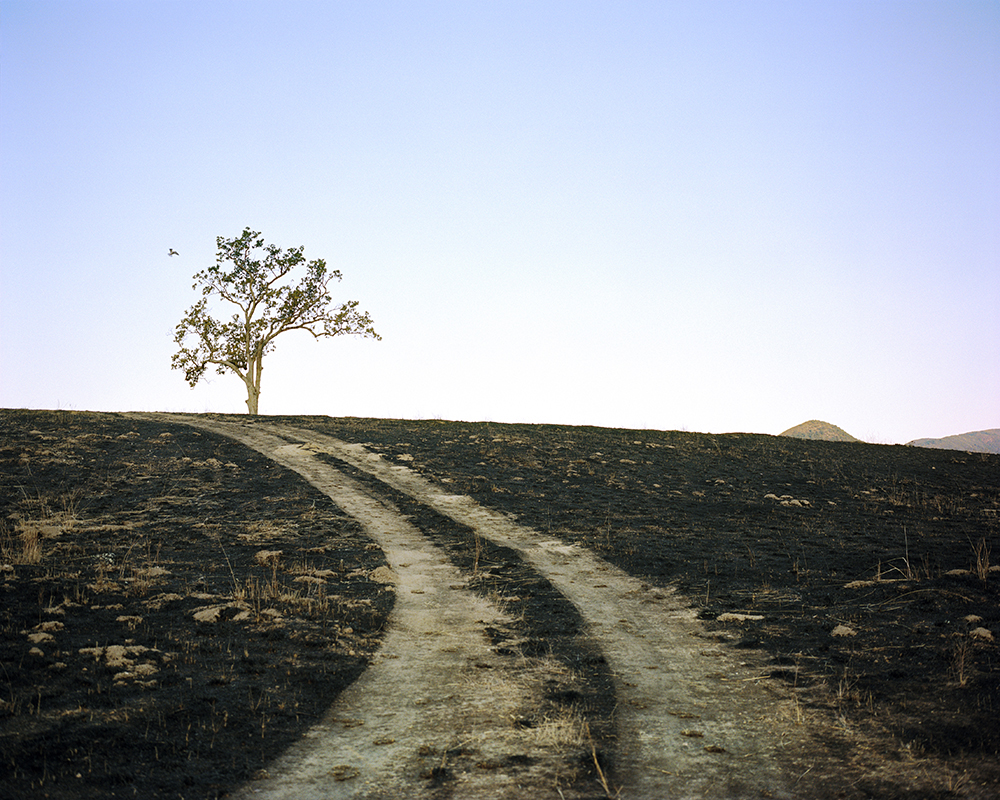 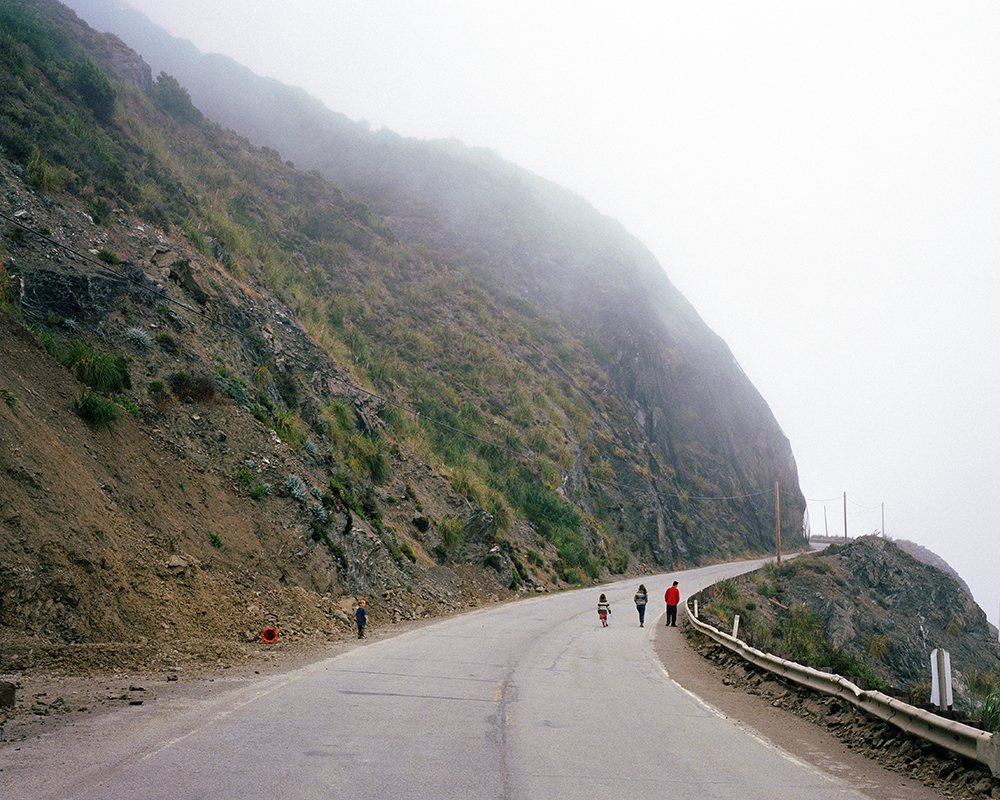 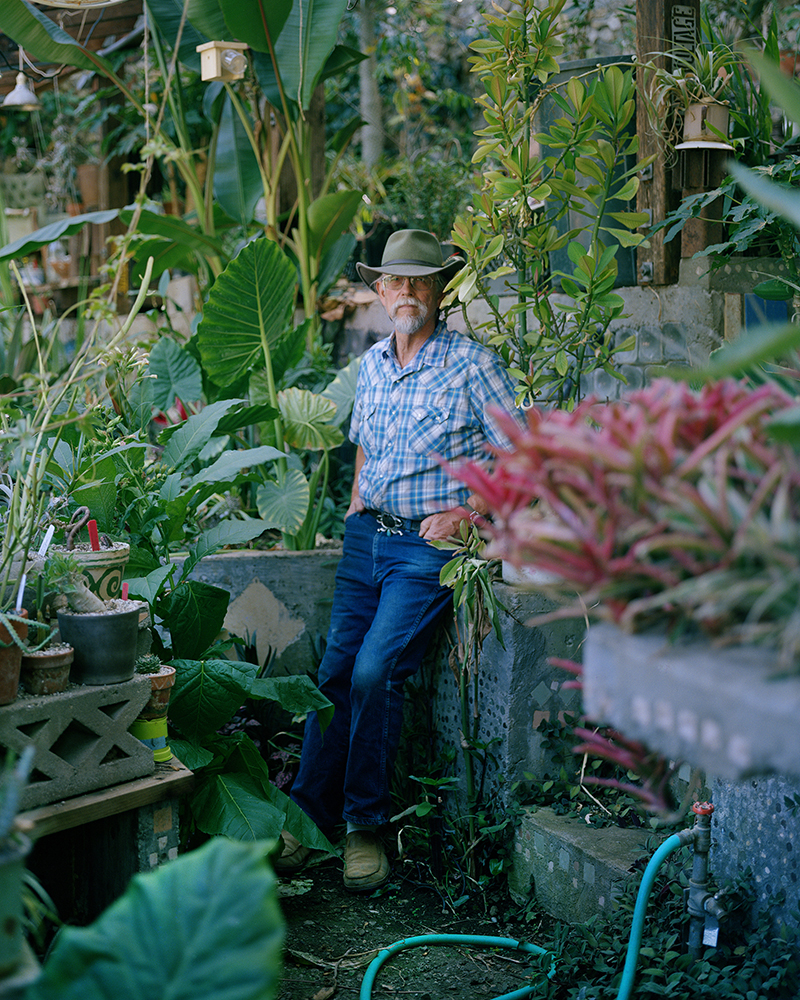 Sharon Harper refers to her most recent work as “geological surveys” with a focus on the aftermath. The concept implies that an event has occurred and her images document the results: the petrified wood of a fallen tree, the silt bank created after the release of a dam, new seeds sprouting in the ashes from a wildfire. Her work further investigates these events as they affect human habitats. The centuries old banyan tree uprooted by increased intensity and frequency of hurricanes, as well as the tonnage of debris left in the wake of these storms. Her aeiral landscapes reveal mountainsides scarred by mudslides, and suburbs decimated either from the mud flow or the assocaited fires and flooding.

Sharon Harper received an MFA in photography and related media from the School of Visual Art in New York. Her work explores the intersection of technology and perception. It is in permanent collections at the Museum of Modern Art, New York, the Whitney Museum of American Art, The Museum of Fine Art, Houston, The Albright-Knox Art Gallery in Buffalo, and the Harvard Art Museums in Cambridge, Massachusetts, the Nelson-Atkins Museum in Kansas City, Missouri, and the New York Public Library among other collections. She has received and attended numerous artist residency fellowships at Yaddo in Saratoga Springs, New York, MacDowell, in Peterborough, New Hampshire, the Headlands Center for the Arts in Sausalito, California, the Ucross Foundation in Wyoming, the Virginia Center for the Creative Arts in Virginia, and the Leighton Residencies at the Banff Centre in Banff, Canada. She is a 2013 recipient of a John Simon Guggenheim Memorial Foundation in Photography. She is currently a Professor of Visual and Environmental Studies at Harvard University. 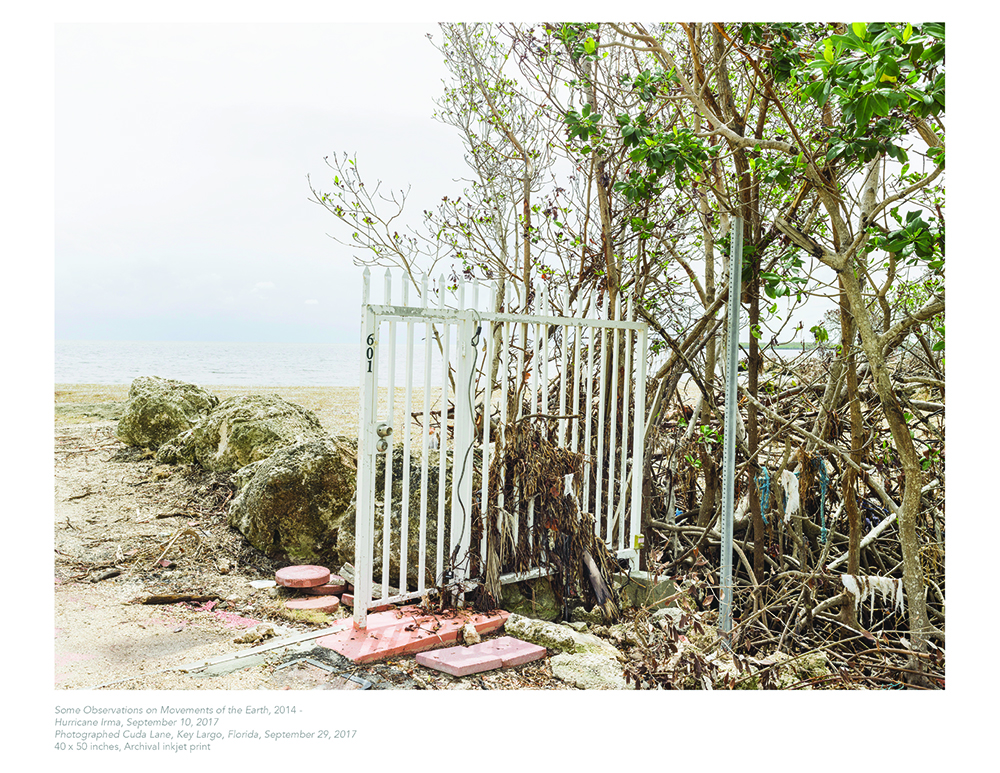 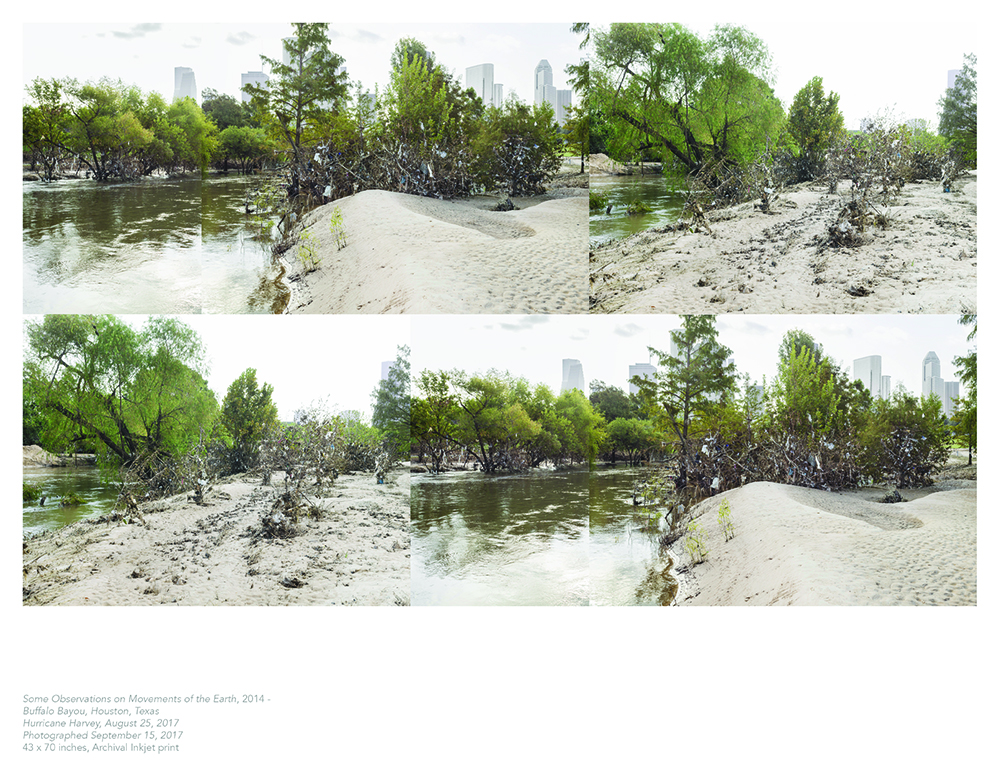 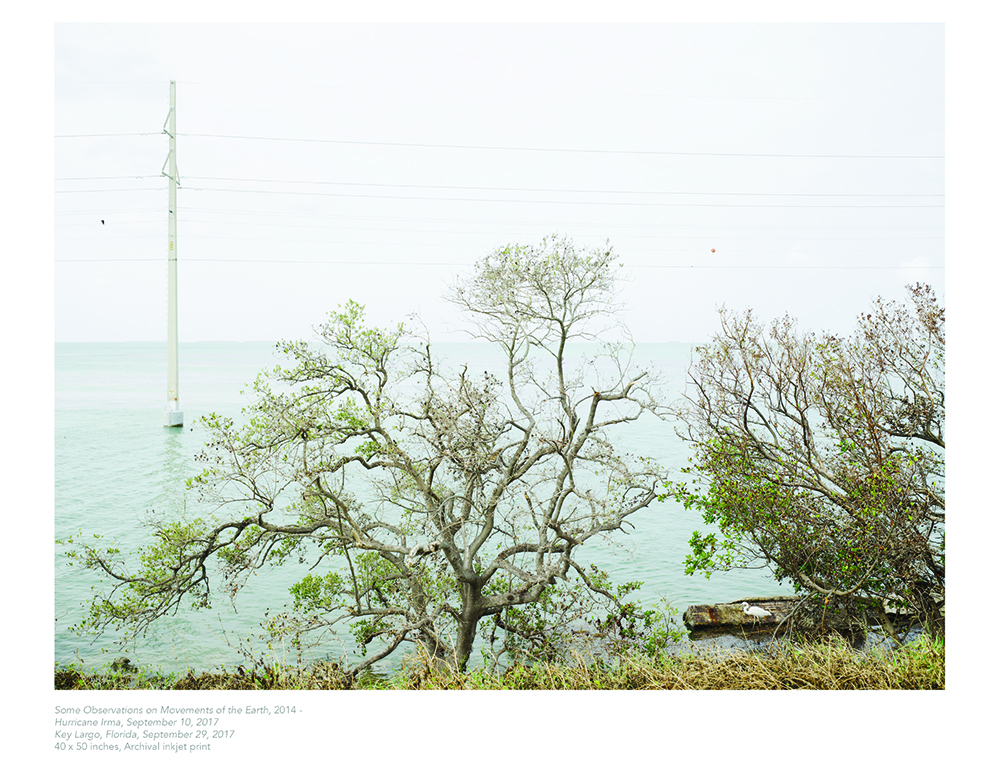 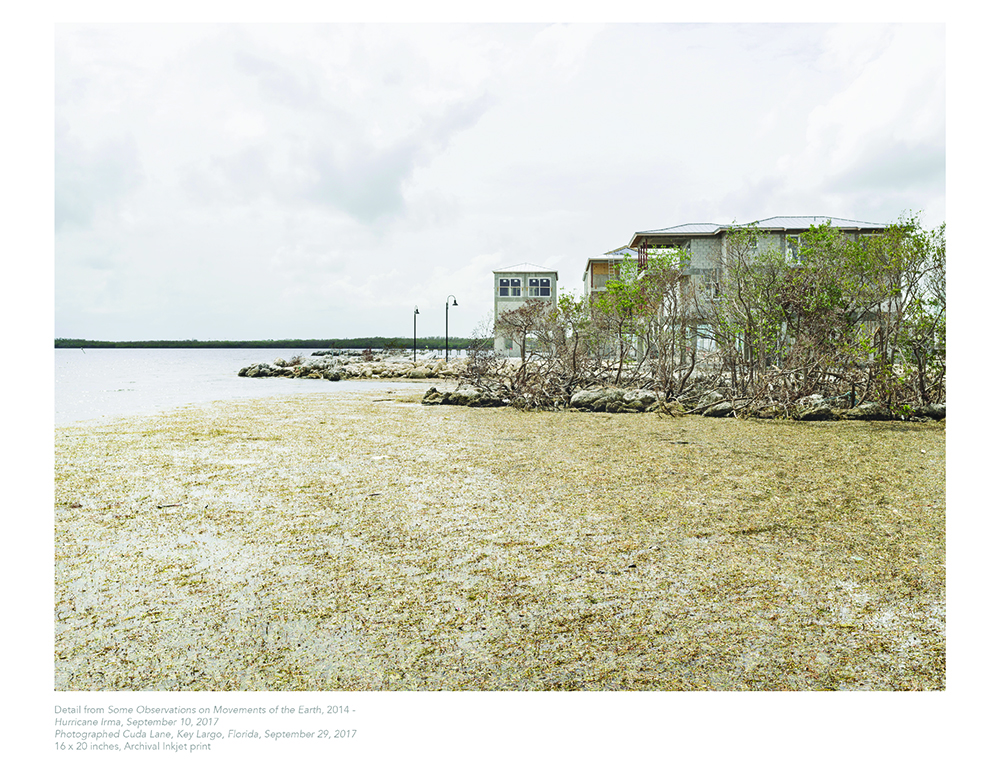 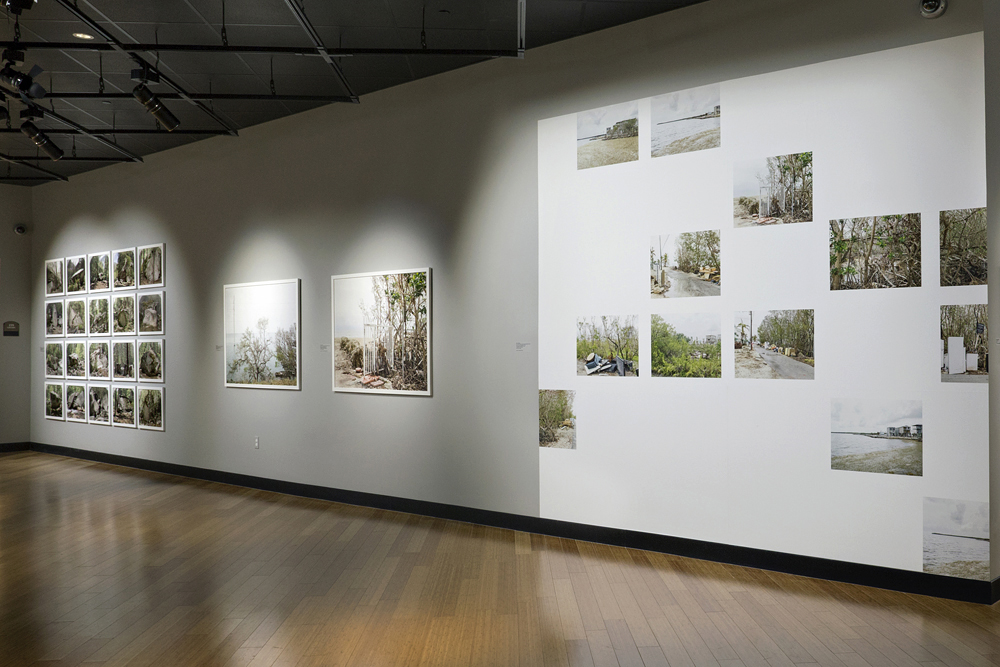 For a period of years Dimmitt has photographed the landscape surrounding a freshwater spring in the wilderness of Central Florida. Over this period of years Dimmitt’s photographs have chronicled the landscape’s turn from freshwater spring to salt water marsh—a result of rising sea levels. Dimmit’s work has a feeling similar to classical paintings—poised, with sharp contrasts of tone, and dramatic emphasis on shape and line. The dying palm trees, slowly slumping over and falling are reminiscent of wounded soldiers depicted in classical works chronicling the fall of Rome. The fallen trees read more like cadavers on the battlefield, picked clean by bugs and scavengers.

Benjamin Dimmitt photographs wetlands and forests using film and a medium format camera. He employs his camera to investigate interdependence, competition, survival and mortality in the natural world.Benjamin was born and raised on the Gulf Coast of Florida. He graduated from Eckerd College in St. Petersburg, FL and also studied at the International Center of Photography in NYC, NY, Santa Fe Photographic Workshop in Santa Fe, NM, Santa Reparata Graphic Arts Centre in Florence, Italy and City and Guild Arts School in London, England.

He moved to New York City after college and held an adjunct professor position at the International Center of Photography from 2001-2013. He now lives and works in Asheville, NC and teaches workshops throughout the Southeast.

His work is represented by Clayton Galleries in Tampa, FL and is in the collection of the Museum of Fine Arts, Houston, the American Academy of Arts and Letters, the Florida Museum of Photographic Arts and Eckerd College among many others. Ain’t Bad, All About Photo, Architectural Digest, Black & White, Don’t Take Pictures, Lenscratch, Oxford American, Orion, Photo District News, The New Yorker Photo Booth and others have featured Benjamin’s photographs. 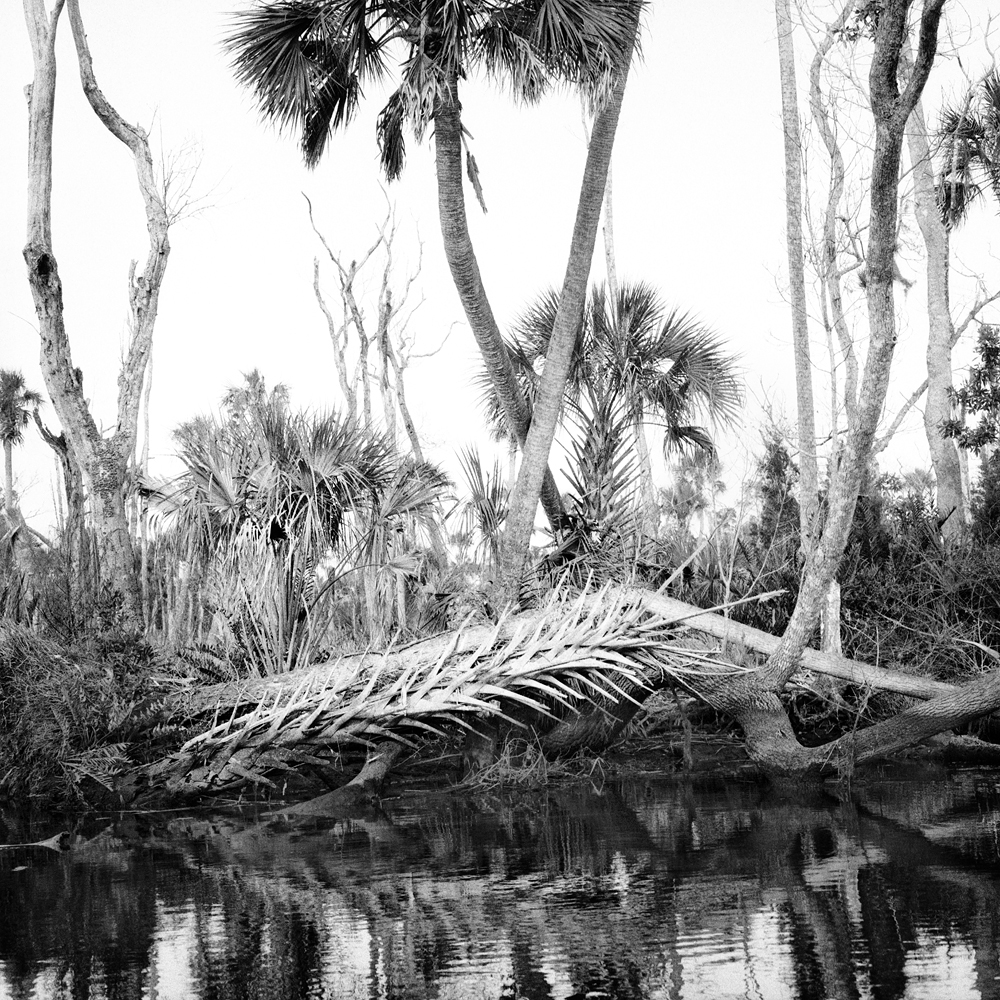 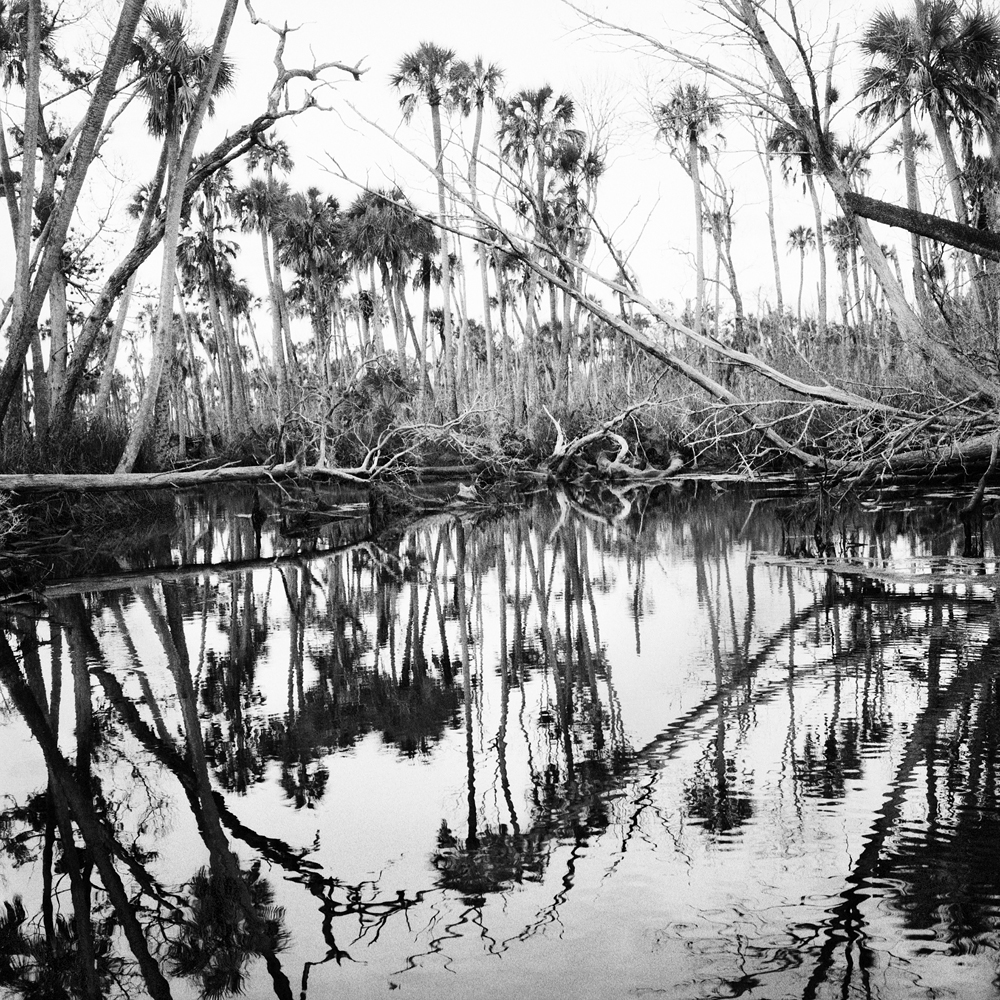 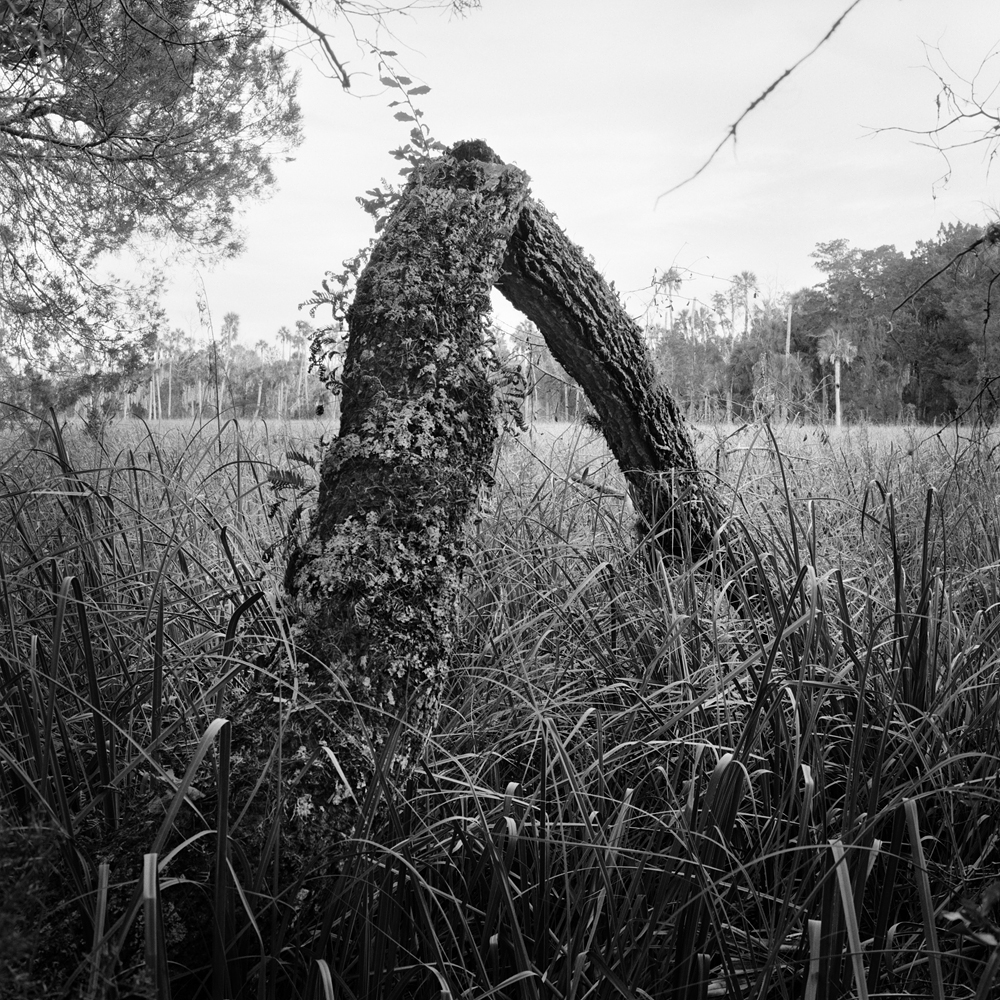 NEXT | Hannah Kozak: He Threw the Last Punch Too Hard >
< Frank Hamrick: It was there all along | PREV