Memory is a Verb: Susan Lapides: The Lobster Girls by Aline SmithsonMarch 8, 2022 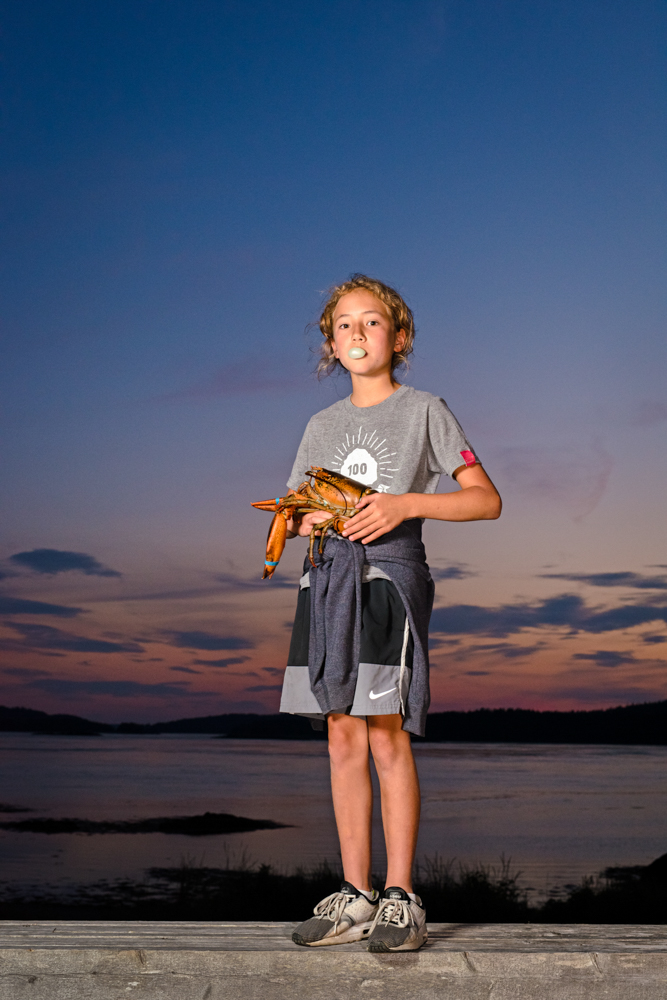 Memory is a Verb: Exploring Time and Transience brings together twelve women photographic artists exploring the liminal space between time and transience. Represented in this body of work are the universal concepts of loss, mortality, and legacy, and the exploration of what inspires us to seek solace, and reexamine our histories; subsequently unearthing discoveries about ourselves, our relationships, and our place in the universe. This week and next we are sharing projects from the exhibition with interviews by the artists. Today we feature the work of Susan Lapides who was interviewed by Jennifer Pritchard. On Thursday, April 21st, 5pm PST, Lapides will be giving an Artist’s Talk through the Los Angeles Center of Photography. Lapides project, The Lobster Girls, is a wonderful time-driven look at growing up, the performative nature of portraiture, and changing identities.

Susan Lapides is a photographic artist who creates time-based projects focusing on adolescence and place. Through her portraits and landscapes, she examines social, cultural and community issues.

Lapides earned her BA in Art History from Tufts University and the School of the Museum of Fine Arts. She had an extensive career as a professional editorial photographer working for Smithsonian Magazine, Life, Time, Forbes, Condé Nast Traveler, UNICEF, Harvard University Art Museums, and American Repertory Theater. She photographed President Barack Obama, then the first African American editor of the Harvard Law Review and Rose Kennedy on her 91st birthday. The most lifechanging assignment was meeting her future husband while photographing his family for People Magazine.

Lapides exhibits her fine art photography nationally and internationally. Her upcoming solo exhibition of The Lobster Girls will premiere at Sunbury Shores Art Center in New Brunswick, Canada in 2022. It also was juried into The Fence in 2020. Lapides’ St. George exhibitions were presented at the Griffin Museum of Photography (Winchester, MA), Sunbury Shores and the Saint John Centre for the Arts (both in New Brunswick, Canada). Her awards include 2019 Critical Mass Finalist, and in 2018 the Beth Block Juried Membership Honoraria from the Houston Center for Photography and an honorable mention in the 13th Julia Margaret Cameron Awards. Lapides was invited to participate in “Outspoken, Extended,” an invitational exhibit of nine women photographers. Her photographs are held in permanent corporate & private collections.

She resides in Boston, Massachusetts, USA and St. George in New Brunswick, Canada. 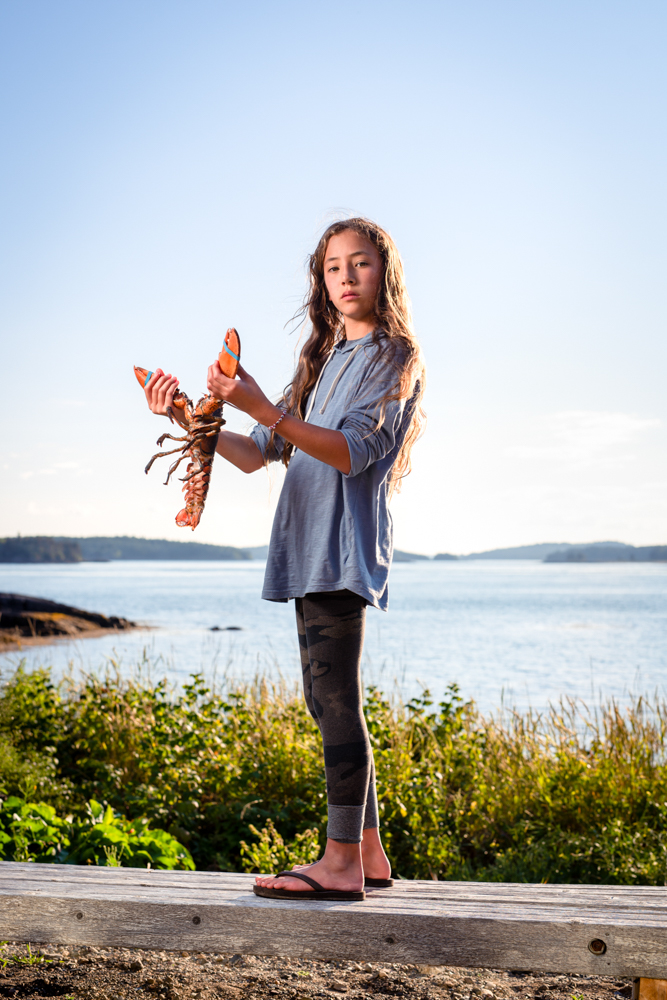 In the rural fishing communities of eastern Canada, the daily routine revolves around twenty-six foot tides and the lobster harvests synchronize the annual calendar. The two eleven-week seasons begin with a tradition of extended families gathering on the wharf in the frigid pre-dawn. Excitement, laughter and chatter fill the moments before one last hug and repeated pleas to “be careful.” Finally, a horn announces the 6am rush to drop the traps into the depths.

It was in this setting that I began to photograph a girl and a lobster, echoing the tempo along the shores of the Bay of Fundy. I photographed seventeen local girls annually, assembling a series of two to six portraits of each one. Using the bay at dusk as a common backdrop, each girl chose her own outfit and the way she held her lobster. Some girls were cautious with the crustaceans, while some were proud and still others nonchalant.

The cycles constancy of this ancient tidal landscape and the shifting light offers a contrast to the fleeting stages of girlhood. I hope to reveal something of each girl’s character as she takes stock of a sea creature symbolizing both the familiar and the unfathomable. By creating this series, I study identity, femininity and how family, local culture and the pervasive influences of society at large manifest themselves in each girl over time. -Susan Lapides 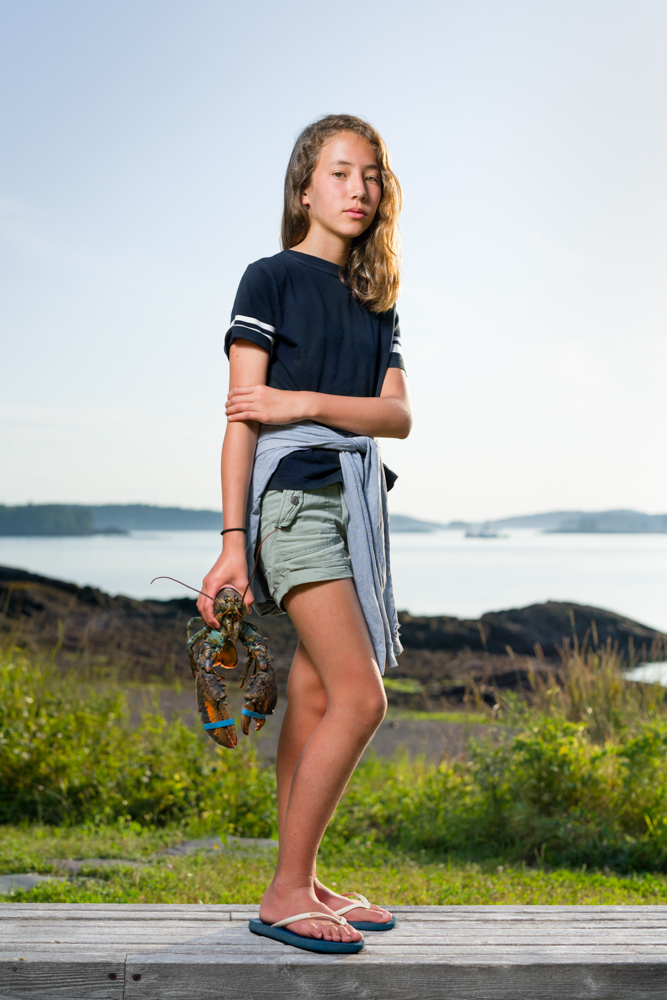 My Mom always said family is forever and we are all still very close. Photographs of family dotted the walls of our home in New England, teaching me stories about our family history. School and reading were difficult so when my brother invited me to join him while he was doing his “homework” in the darkroom, my life changed. Immediately I signed up for a photography class. I discovered that the world supported my ability to communicate my insights about people and my observations with a camera. It was the beginning of my editorial career photographing for national magazines. 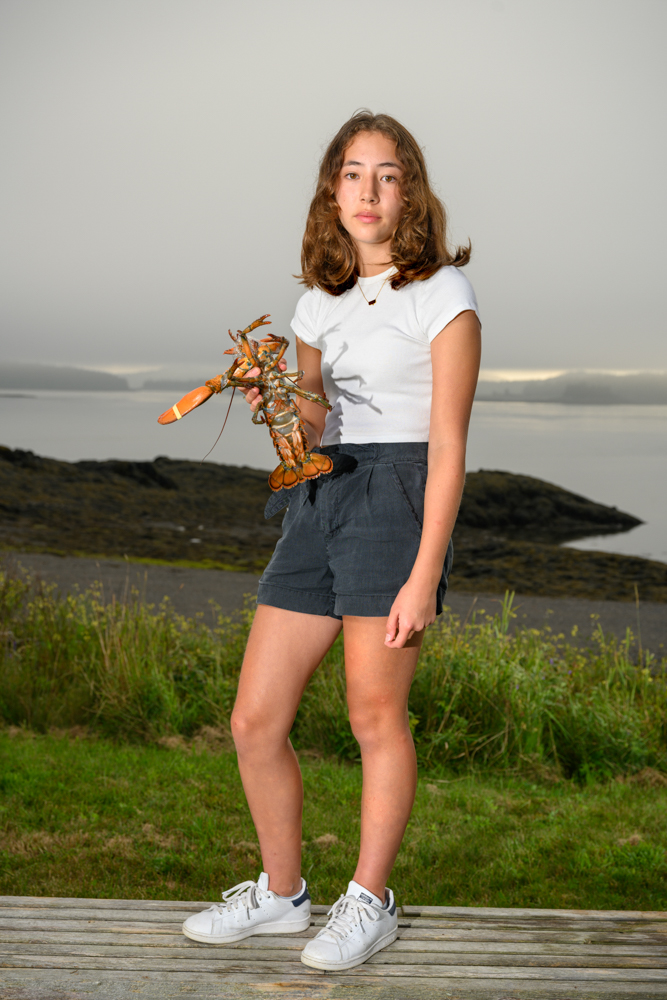 What are themes that you continue to explore?

The Lobster Girls series contrasts the development of young girls through time with the cyclical and timeless maritime landscape behind them. Each girl is photographed annually, charting her growth through adolescence. 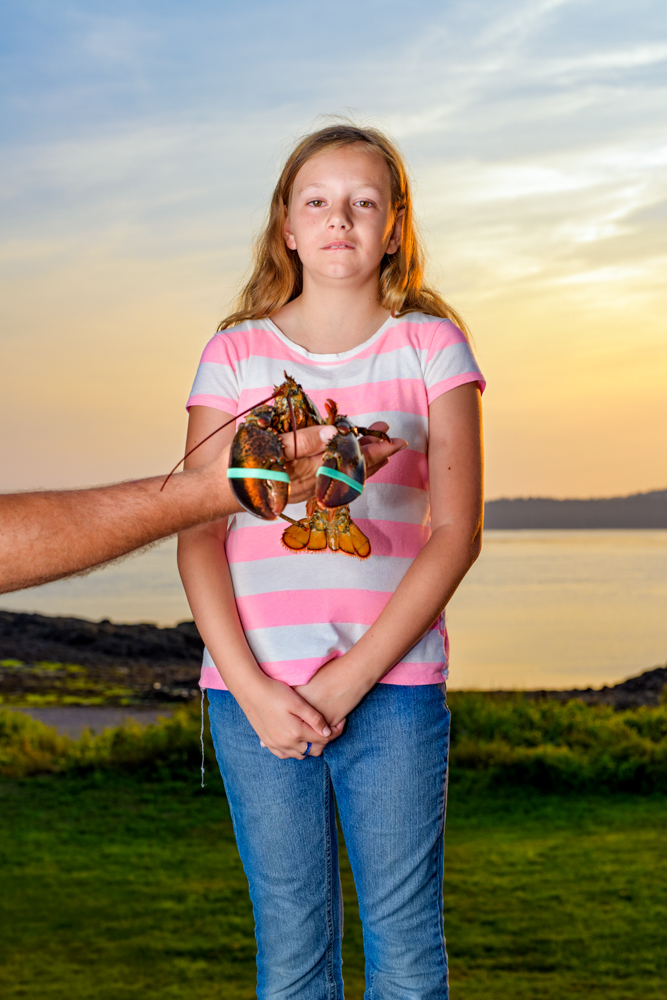 What is your connection to New Brunswick and why does it play an important role in your work?

My series of The Lobster Girls evolved organically in a rural fishing community where lobstering dates back to the indigenous people. It is situated on the Eastern shores of Canada on the magnificent landscape of the Bay of Fundy, The twenty-six-foot tides kiss the beach grasses and then roar out two hundred feet so rapidly you can witness the retreat which exposes the ocean floor. Much like this odd pairing of a girl and a lobster.
Awed when we first arrived, I created my first project St. George to reflect the collective memory of the community of this small town. Fleeting moments of childhood, and a nostalgia for older ways of living. are juxtaposed against the backdrop of the globalization of the fishing industries. 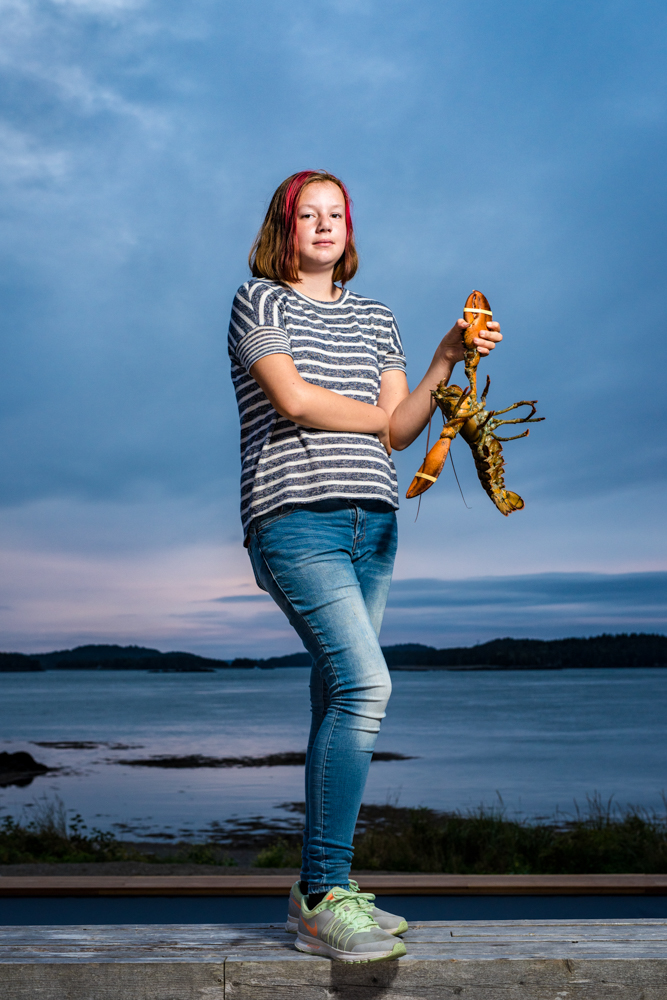 How did this project come about?

As a kid I never touched a snake or a frog, so when my daughters fearlessly caressed lobsters, I wanted to document the moment. With the ocean and the setting sun behind them, I used my 645 with the built-in flash. This camera was new to them and so with the lobsters in their hands, and their eyes gazing directly into the camera, something happened. No poses, no facades, no impatience with me, their Mom, just direct connection.  Unlike any other photo I ever took of them.
Over the last six years, the project has expanded to include 22 girls from the small fishing town, we call home in the summer. 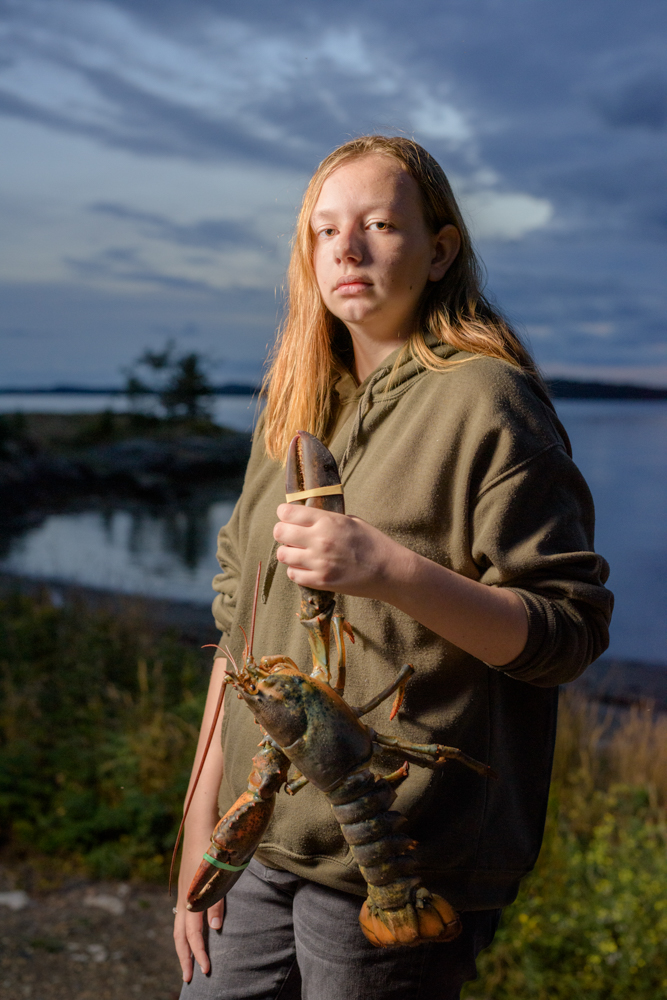 Would you share a bit about what you have witnessed in the pivotal transition of these young girls to young women?

Each girl handles the crustaceans in their own unique ways: some cradle, some squirm, some raise it aloft triumphantly. Over time, the girls come up with their own strategies to deal with the strange creature and the lobster becomes less prominent.  The portraits reveal the intimate process of growing up: learning to cope with tough, spiky situations, and finding their voice. 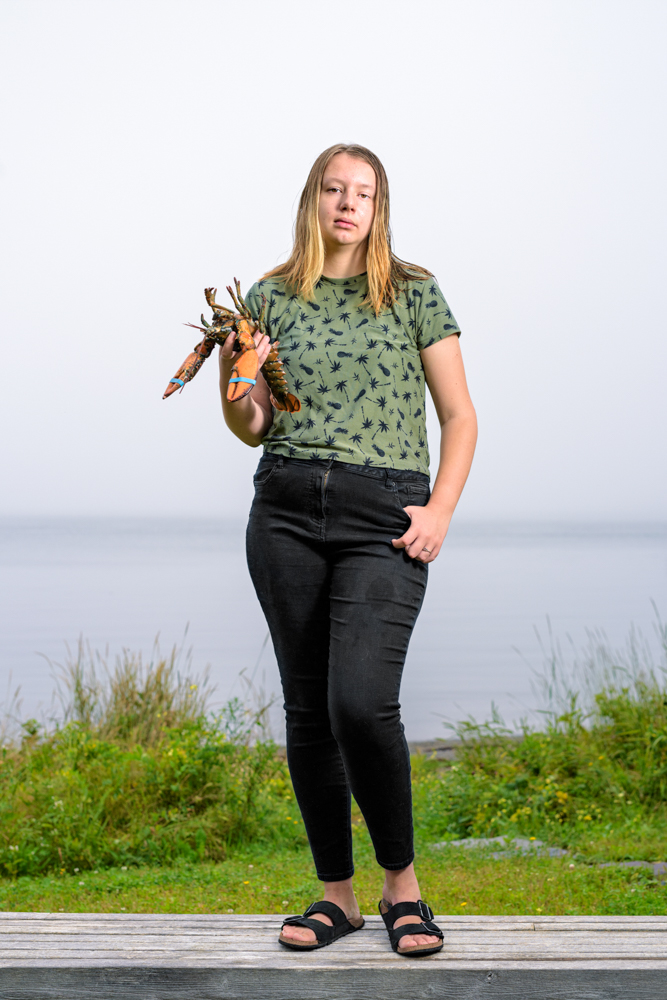 Young girls and lobsters are no doubt a combination rife with some amusing anecdotes.  What is one of your treasured memories from creating the series?

The mosquitos! It’s sunset, and the mosquitos are swarming. My dog wants the girl to throw her the ball. The lobsters sporadically flap their tails, and the girls all smile in embarrassment as they struggle to hold on. There is the girl who works summers in a lobster factory, but at eleven would not hold the lobster so her Dad did, and then she skipped the next year. The girl who is pregnant. The girl who put the lobster on the bench every third or fourth picture. The girl who ran down our dirt road, begging me to make her portrait right now. And there is the Dad, who has seen his daughter almost every day for 18 years, who now looks at her new portrait wide eyed, witnessing for the first time, that she has transformed into a young woman. 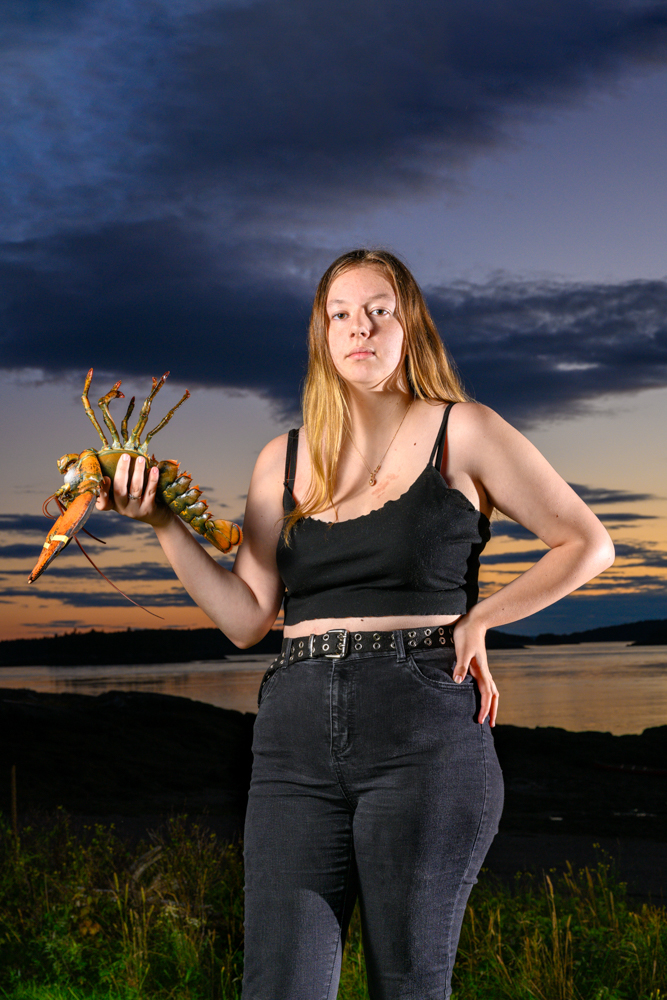 How was the continuity of this project impacted by the pandemic?

During Covid, the US/Canadian border closed for the first time in over 100 years. I was forbidden to enter Canada. Like families around the world, I missed seeing “my” girls.
Many of them had jobs now, or were applying or leaving to University, had surgeries, or another baby. Finally I had the opportunity to do audio interviews with each girl. 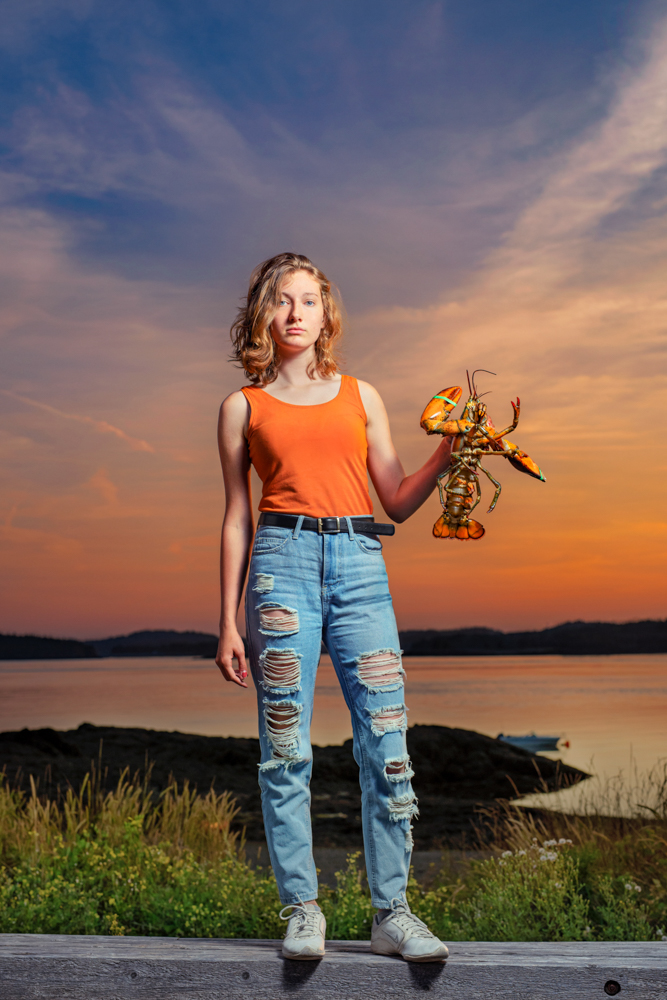 What can you tell us about the collective that is Memory is a Verb?

Memory is a Verb is an offshoot from Aline Smithson’s masterclass from the Los Angeles Center of Photography. Twelve women photographic artists exploring the liminal space between time and transience.

The Lobster Girls explores the universality of child development, There is the perspective of the girls as they remember and reflect who they are and who they have become and what will be their future. There is the memory of the parent who witnesses the one step forward, one step back of development struggling to keep up with their child’s daily changes. And feels the loss of the past stages, and wonders about their future. And there is the viewer who will always question “Is this the same girl?” 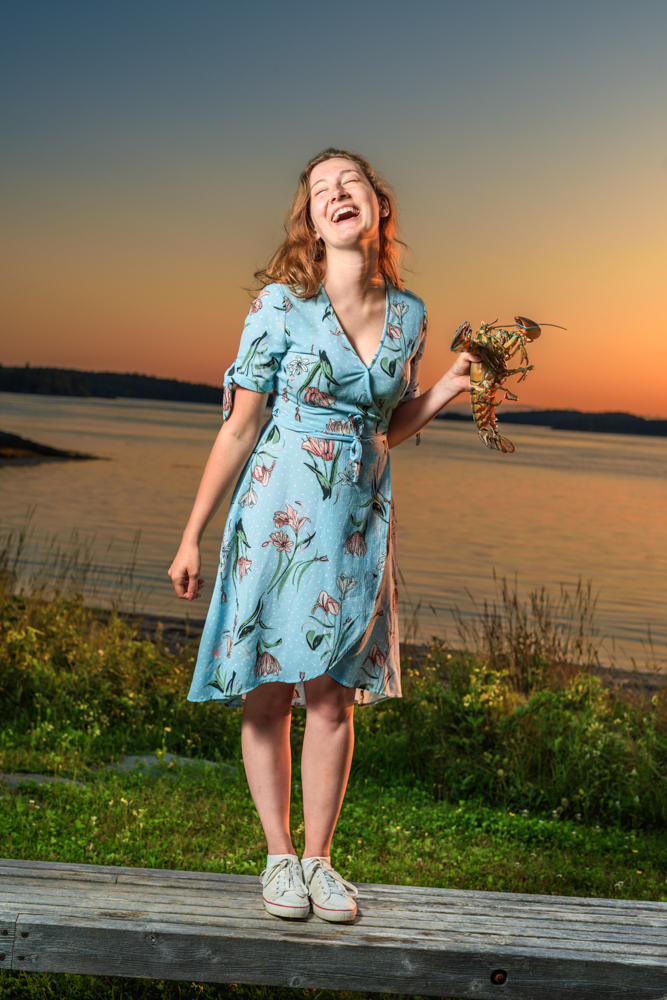 What qualities do you attribute to the perseverance of bringing a long-term project to completion?

I will never do a project again that takes this long! You just can’t rush taking an annual photograph. Only wait patiently. I joke the girls are growing up and so am I. My lighting changes slightly as does my shooting style. Even the bench the girls are standing on, has moved. 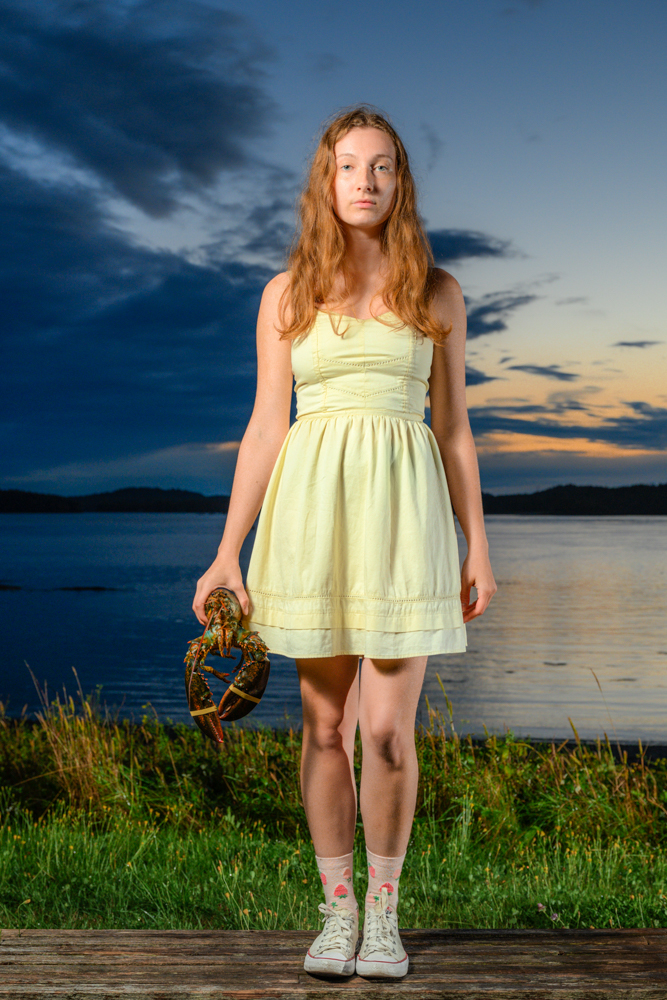 Who or what is inspiring you at the moment?

At this moment, I am preparing for my second solo exhibit at Sunbury Shores Art Center in St. Andrews, New Brunswick Canada July 22 – August 13, 2022. Eventually there will be a book.

Most of all I look forward to lots of new adventures and enjoying my family and the friendships I cherish. Photographically I want to begin a new portrait series of young teens. I want to publish a book St George. And tackle my vast archives that are tugging on my sleeves, awaiting my attention. The first project will be the photographs documenting the daily life and the harvest for olive oil and red wine by a Florentin family who still farmed in the Italian tradition of mezzadria.