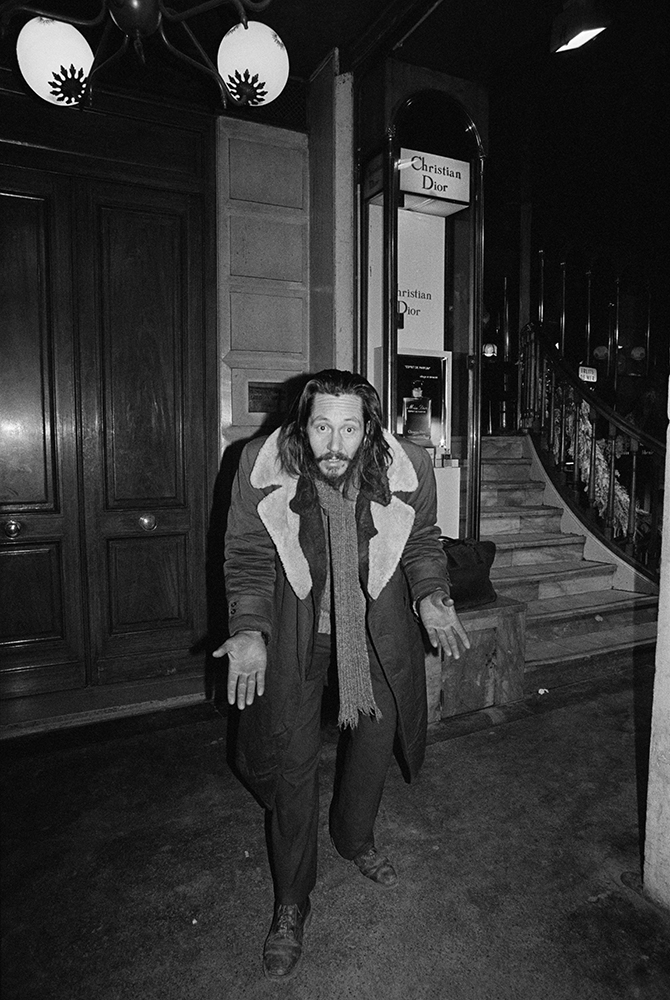 As a photographer who walks my city’s streets at twilight, I’m often alone. That is why it gives me special pleasure to appear in and present a group of my fellow night photographers under the rubric, “Making Darkness Visible.” The five of us represent a variety of approaches that suggest the rich possibilities of night photography. As you will see, we work in color or black and white, and in different environments, including cities and rural or suburban areas. Wouter Vanhees and I each wander through our chosen cities, often on deserted streets, chronicling the transitions and juxtapositions of the urban landscape. Daniel Anizon seeks to recapture forgotten unconscious images by photographing the periphery of his vision as he walks at night through the countryside. Jill Waterman documents the social rituals of New Year’s Eve in different countries, celebrations that fill the darkness with artificial light. MJ Sharp takes as a theme, what most of us implicitly believe, that the darkness of night is a precious and endangered resource. Her nighttime photographs of ancient stone monuments in Cornwall, UK, are lit by moon and stars. And finally, all of us hone our night vision and, in Jill Waterman’s words, rely on our “camera’s ability to record things that are beyond the capabilities of human [sight]” to make the darkness visible.

Jill Waterman is a photographer, editor, writer, and educator based in New York since 1985. A night photography specialist, she pursues long-term personal photographic projects, including her ongoing, 38-year documentation for The New Year’s Eve Project.

This project has been extensively featured by press and media outlets, including a TV documentary on Waterman’s 1997 coverage in Berlin, Germany, for the Deutsche Welle show Arts Unlimited; a 2003 interview with Katie Couric on NBC’s The Today Show; and a 2015 documentary for the Web TV show Culture Connect.

Waterman’s work is represented in numerous Museum collections, and her photographs have been exhibited internationally in galleries, cultural centers, and corporate spaces. Her first book, the technical volume Night and Low Light Photography was released by Amphoto books, a division of Random House, in August 2008.

Throughout the 1990’s Waterman worked professionally in the stock photography industry, holding multiple creative positions, before transitioning to the editorial marketplace and custom publishing. From 2003 to 2015, she worked for Photo District News, serving as editor of the ASMP Bulletin and the student photography magazine PDNedu. She is currently employed as a senior creative content writer for the B&H Explora blog.

Waterman has lectured widely, taught workshops on many aspects of photography, and reviewed portfolios for international photographic conferences and events.
In 1991 she was a founder of 494 Gallery; an artist-run space for photography and media arts located in Soho until 1995. Since forming this gallery, she has also served as an independent adviser to fine-art photographers on the presentation and marketing of their work. 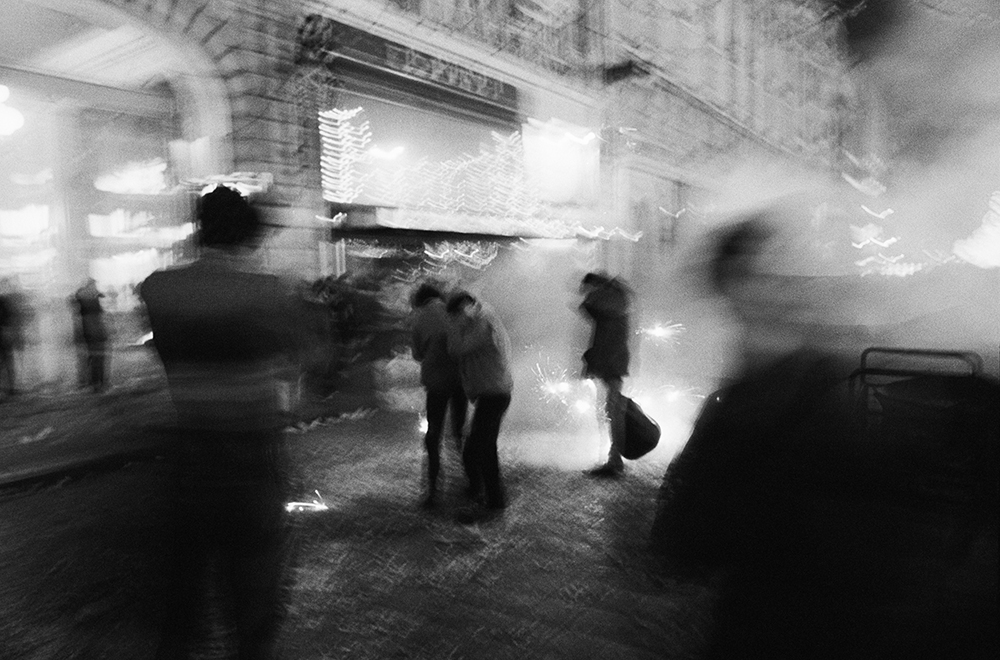 New Year’s Eve is the holiday of anticipation. Since December 1983, I have photographed this annual celebration in cities with an international scope, throughout North and South America, Europe, Asia, Africa, and the Middle East.

My subjects are ordinary people filled with the spirit of an extraordinary night. I photograph in the streets and at venues where I have prearranged access, visiting a wide variety of locations. Each year the duration of my coverage varies based on local events. In some destinations, the celebration begins in late December, in others it continues into the beginning of January. In all my photographs, I look for the unraveling of a moment, the gestures found on the periphery of a standard pose.

For uniformity of approach, my equipment has remained consistent over time—a 35mm camera, black and white film, off-camera flash, and an external battery pack. I often combine flash with slow shutter speeds for a hint of the ambient light and motion unfolding around me.

As a supplement to my photographs, I collect written documentation about this holiday. This assemblage of personal recollections, past traditions and current events is compiled during my annual research, and through conversations with people I meet during my travels, at lectures, or during exhibitions of this work.

In recent years my project has been acknowledged by media attention and professional recognition. My New Year’s coverage has been headlined by lifestyle features in the Philadelphia Inquirer, the Miami Free Times, the Jerusalem Post, the Reykjavik Grapevine and the New Orleans Times-Picayune, among other publications. During New Year’s Eve 1997 in Berlin, a film crew made a documentary about my coverage that aired worldwide on the program Arts Unlimited of Deutsche Welle TV. In 2003, I was a guest on NBC’s The Today Show in an interview with Katie Couric, and in 2015 my project was featured in a documentary for the Web TV show Culture Connect.

New Year’s Eve chronicles a milestone, marking an annual passage of time common to all people. For this brief instant, the world sets aside the burden of daily living in hopeful anticipation of what the future will bring. My documentation is a unique time capsule that has evolved over time, from one millennium to the next. My ultimate goal is to combine my photographs and written materials—to tell the story of this one truly global holiday in published form. 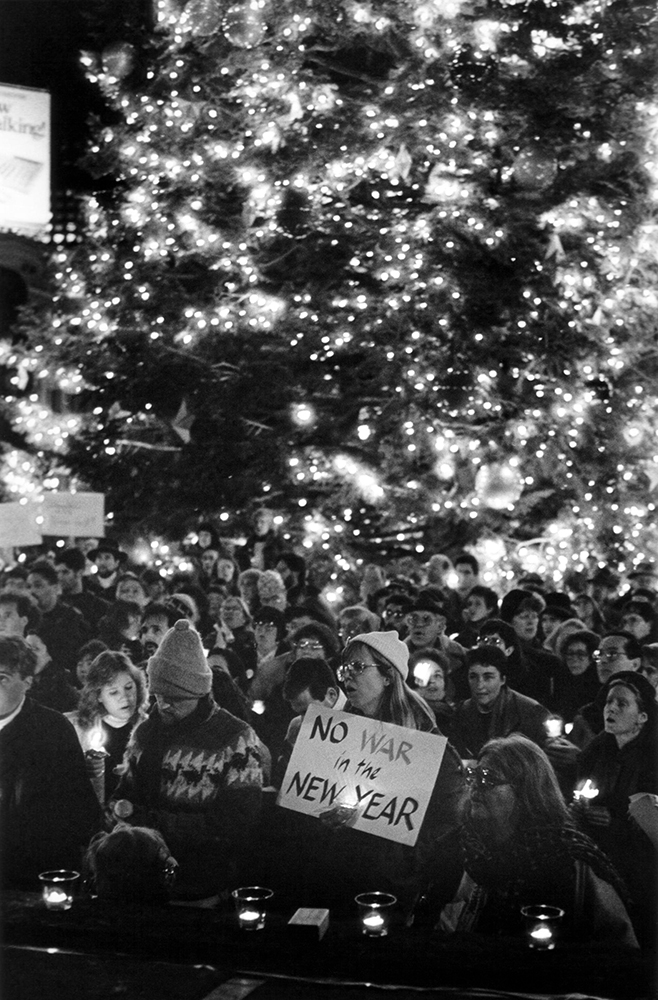 One of my earliest sensory memories as an infant is laying on the living room floor and being aware of light streaming into the room through closed curtains. This was long before I had the slightest awareness of art or photography, yet I believe it was a primal experience that would have an underlying influence on my future. I was always interested in art as a child but didn’t really have a firm direction until after college. During high school I was an art major, with a course of study that took up the first two class periods every day. I think the only thing I didn’t study during that time was photography. 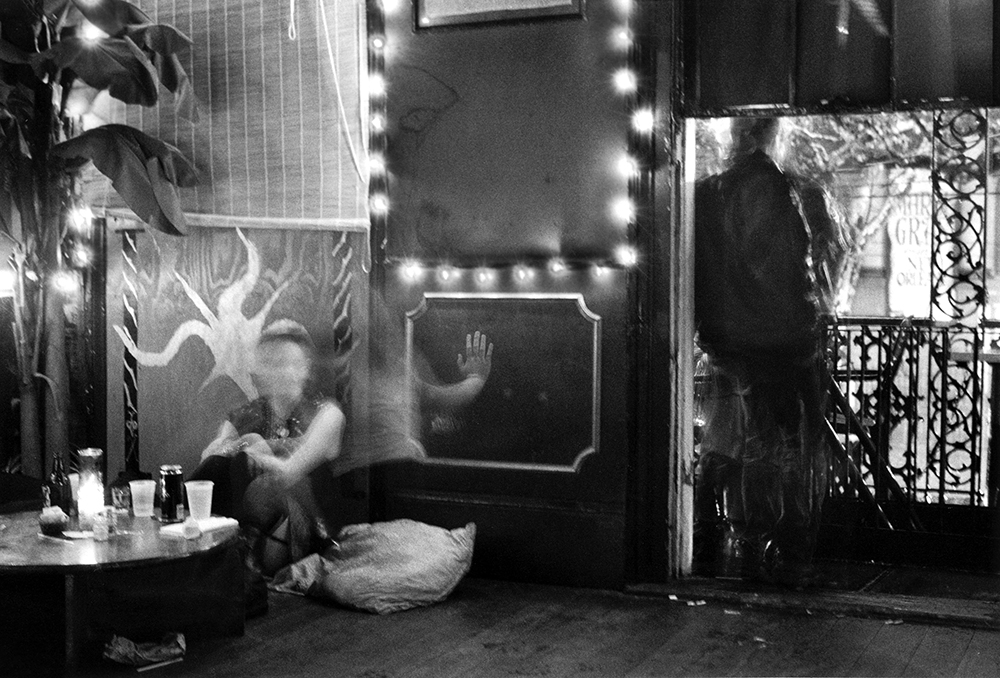 As an art major in college, I decided to major in printmaking, specifically etching. During the summer of my junior year traveled to Italy where I took an intensive month-long workshop in photoetching. From that point on I focused exclusively on combining etching with photography. After graduation in 1981, I made plans to study printmaking in Paris (so I could also perfect my barely tolerable French language skills). After much research and several grant applications, I was offered an artist studio at the Fondation des Etats-Unis (as well as access to a basement darkroom), while also arranging to study studio art at the University of Paris, and being accepted to work in a private printmaking atelier. Once in Paris, I immersed myself in both printmaking and photography, but photography eventually won me over as a faster, more direct, and endlessly diverse form of expression. Some of my earliest photos were long exposure nighttime portraits of friends made with the streets of Paris as a backdrop. Then, in December 1983, I photographed my first New Year’s Eve in Paris. 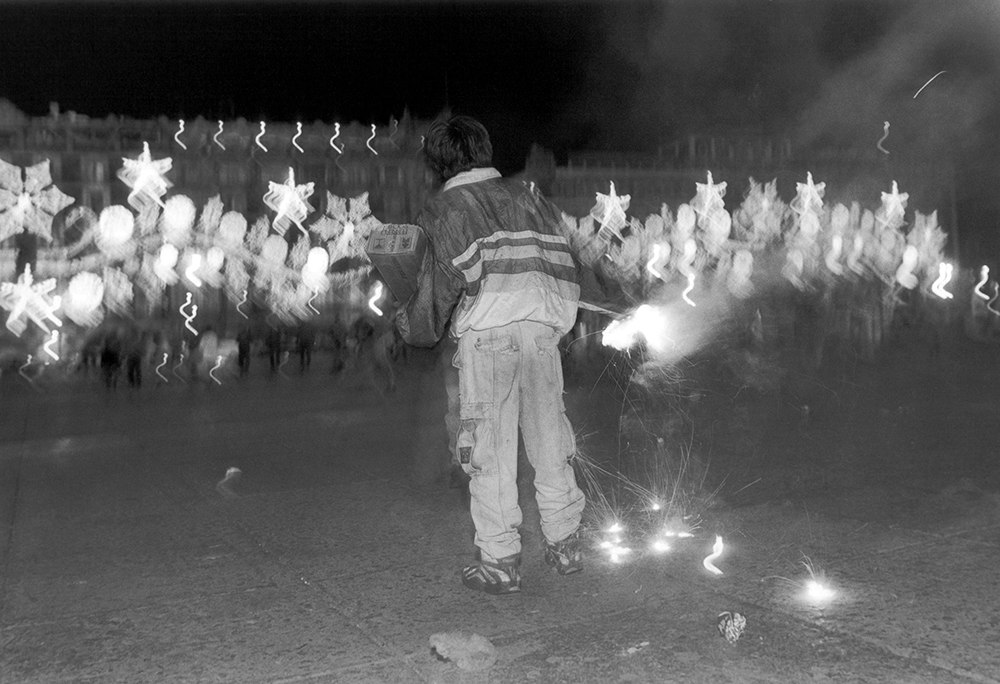 What interests me most about photography is the camera’s ability to record things that are beyond the capabilities of human vision, and this is a phenomenon that is ever present at night. Making pictures at night is rarely straightforward, and using a manually adjusted analog camera to play with elements such as slow shutter speeds, motion blur, and unpredictable lighting can be especially challenging, yet it’s always wildly exhilarating when the alchemy of circumstance lands just right. 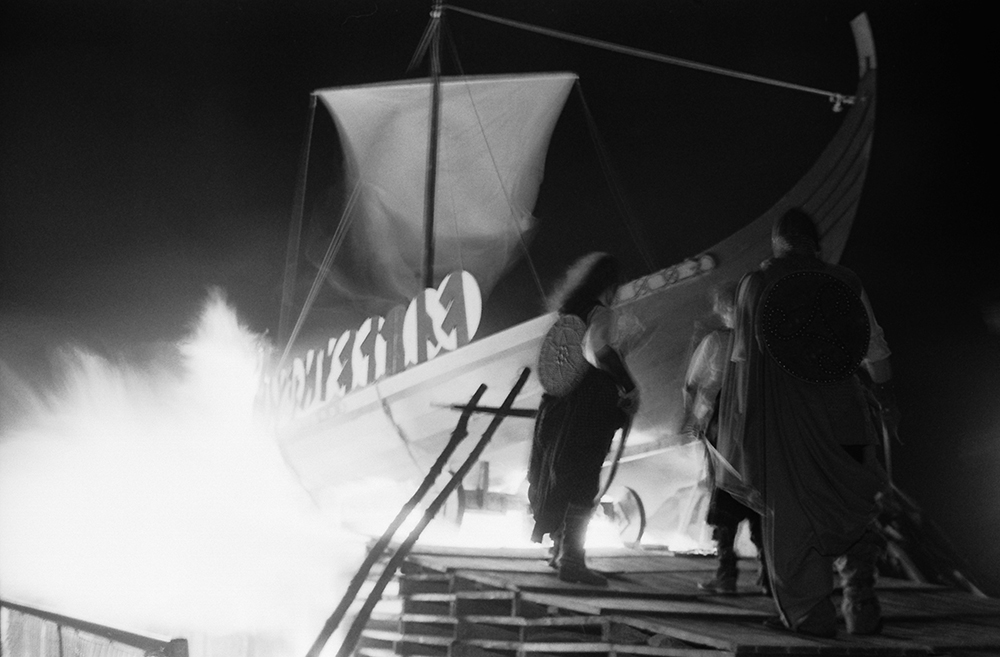 Do you see architecture differently at night?

One big advantage to picturing architecture at night is the fact that extraneous detail and general clutter is often masked by artificial lighting, either emanating from the building itself or cast by ambient light. The resulting play of shadows and highlights on the surface of a building add drama and heighten the appeal. 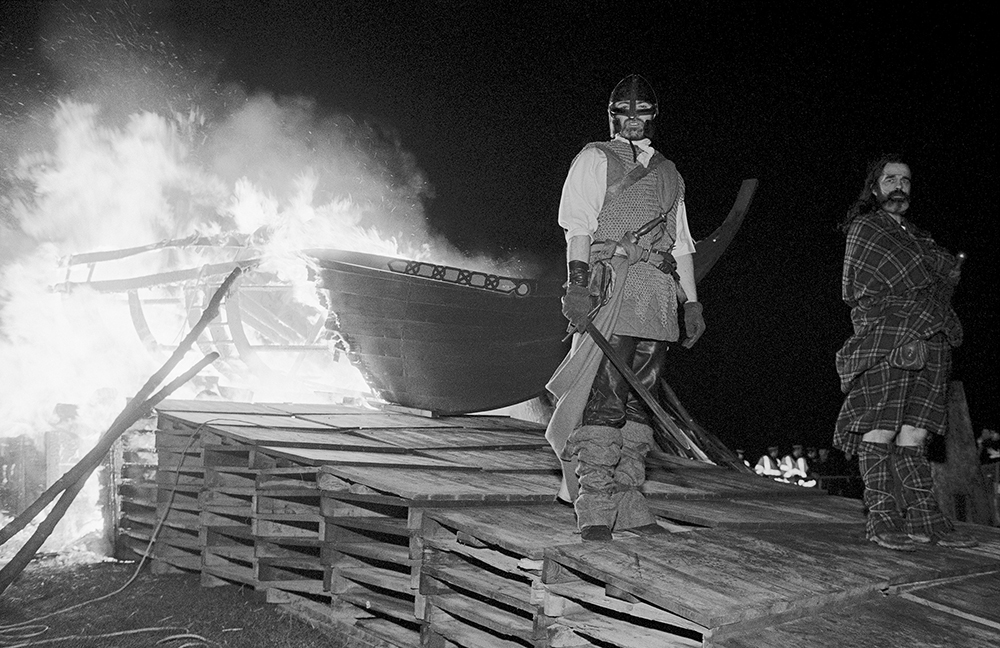 I’ve found inspiration in many different people and things over the years, and my artistic inspirations are not limited to photography. I’m not sure where to begin with a general list, but a few of the inspirations for my New Year’s Eve Project are classic photographers such as Weegee and Brassai, film noir, jazz saxophone, and George Orwell’s 1984. 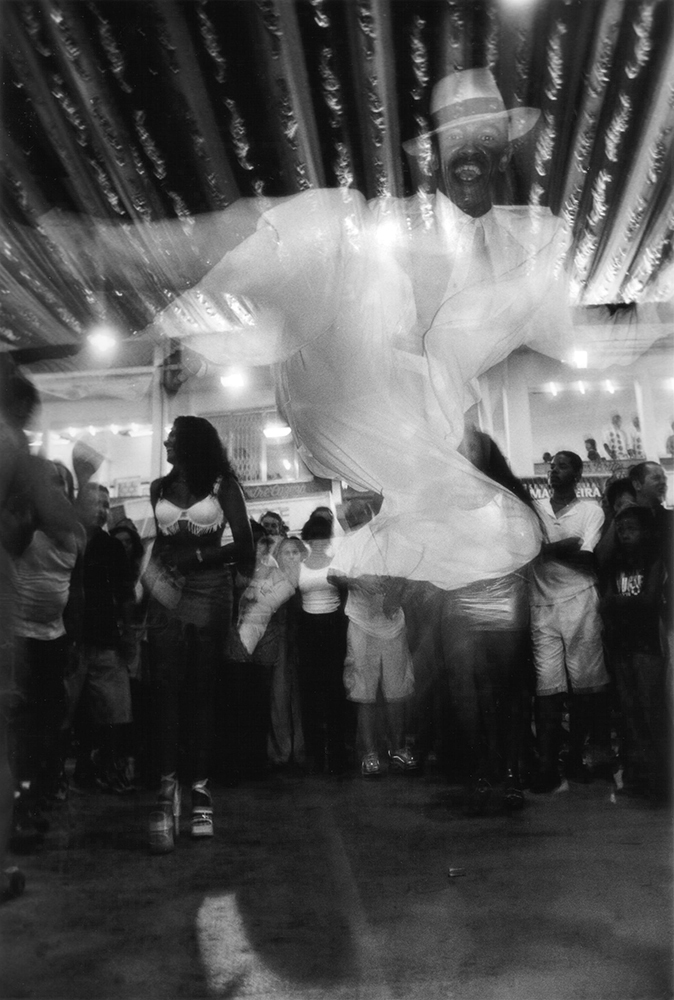 It’s hard for me to answer this question. I guess the first next thing for me to consider is my next New Year’s Eve destination. I recently learned that the world’s biggest fireworks display takes place on the island of Madeira during New Year’s Eve, so this is currently at the top of my list for 2023 (although COVID has made this kind of planning more challenging than ever). A few years back, I started writing about my past adventures with this project as a memoir of sorts, and this is a new dimension of the work to which I’d like to devote more time and energy. I also think there are still a lot of undiscovered images hiding among my negatives from past New Year’s shoots, so the search for such gems will continue as well. 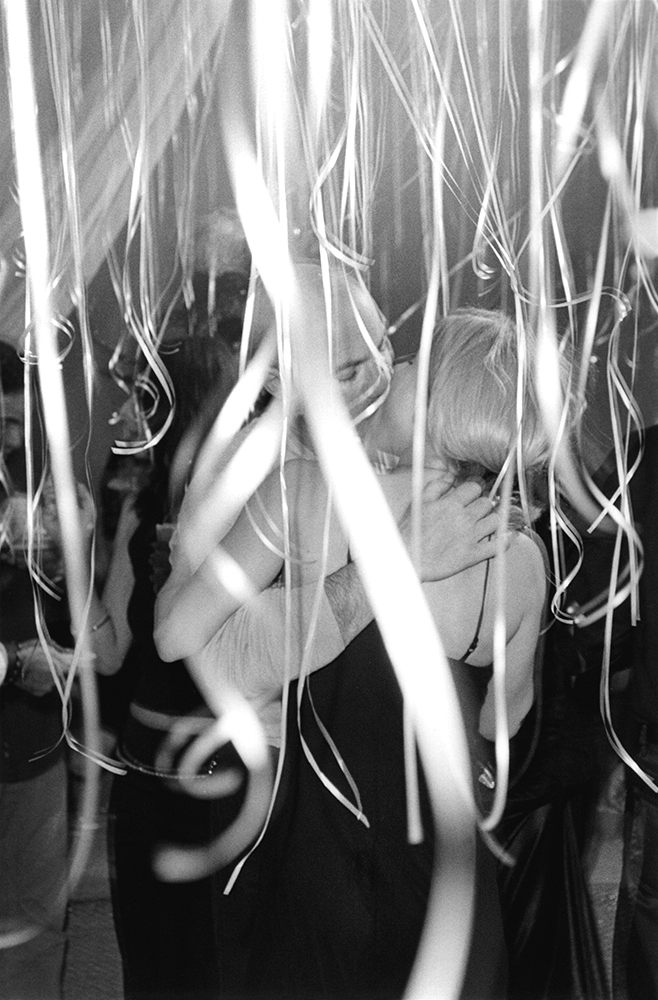 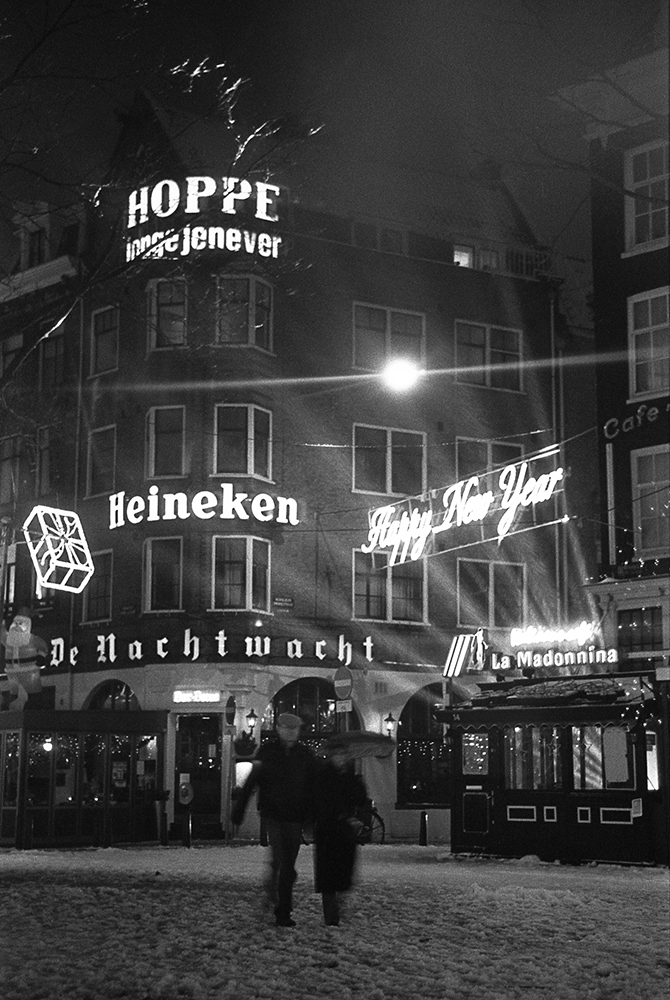 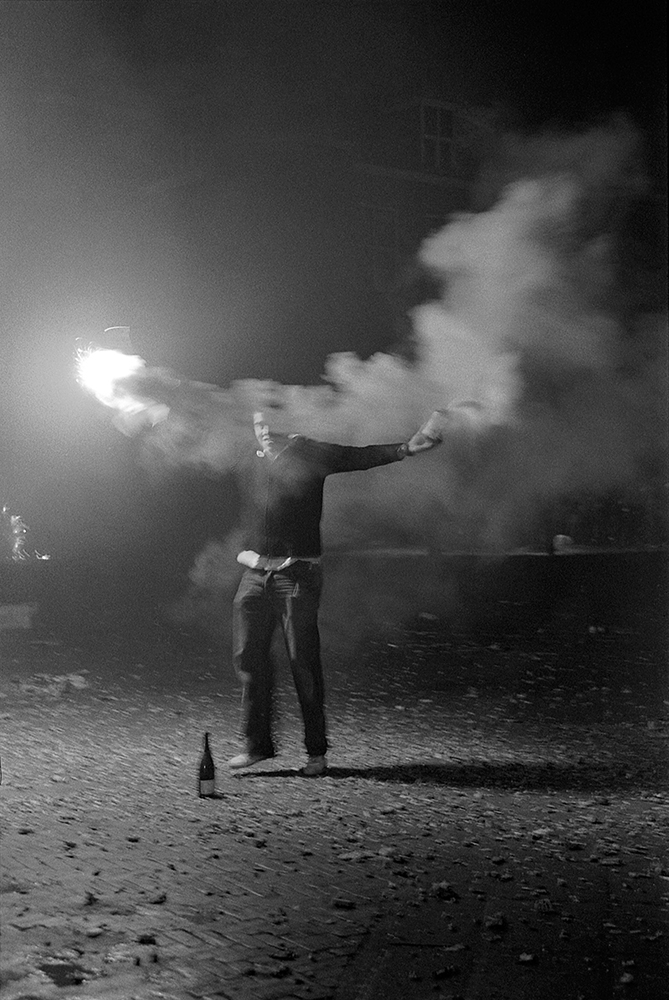 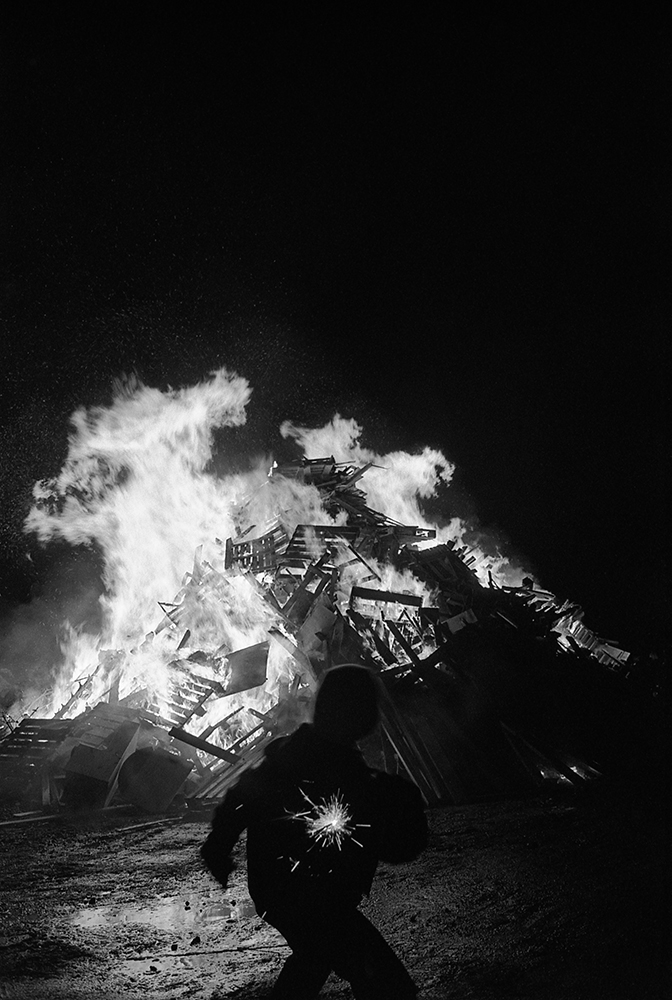 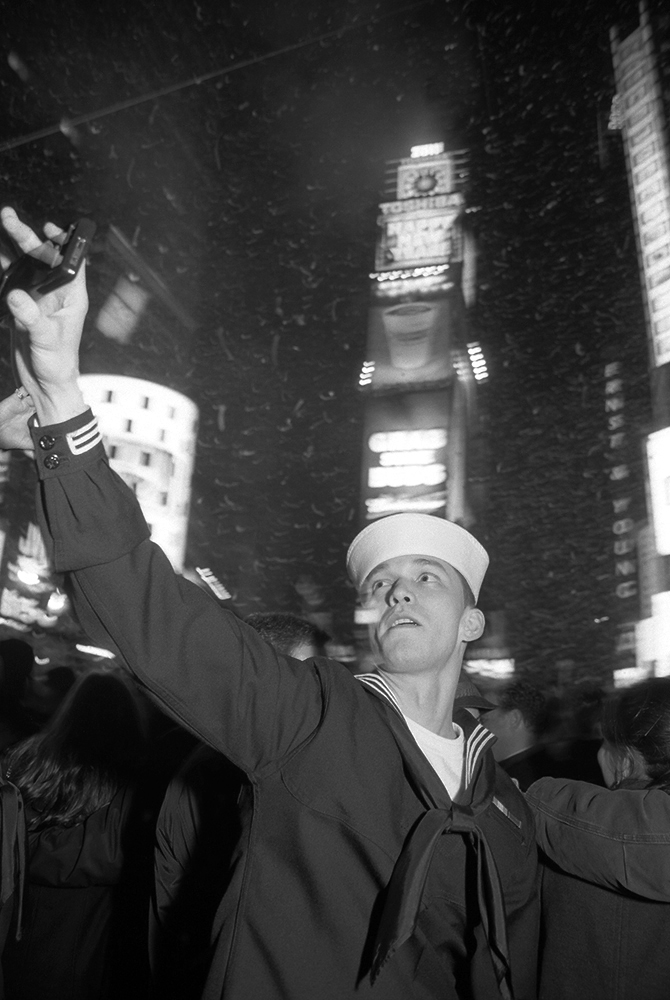 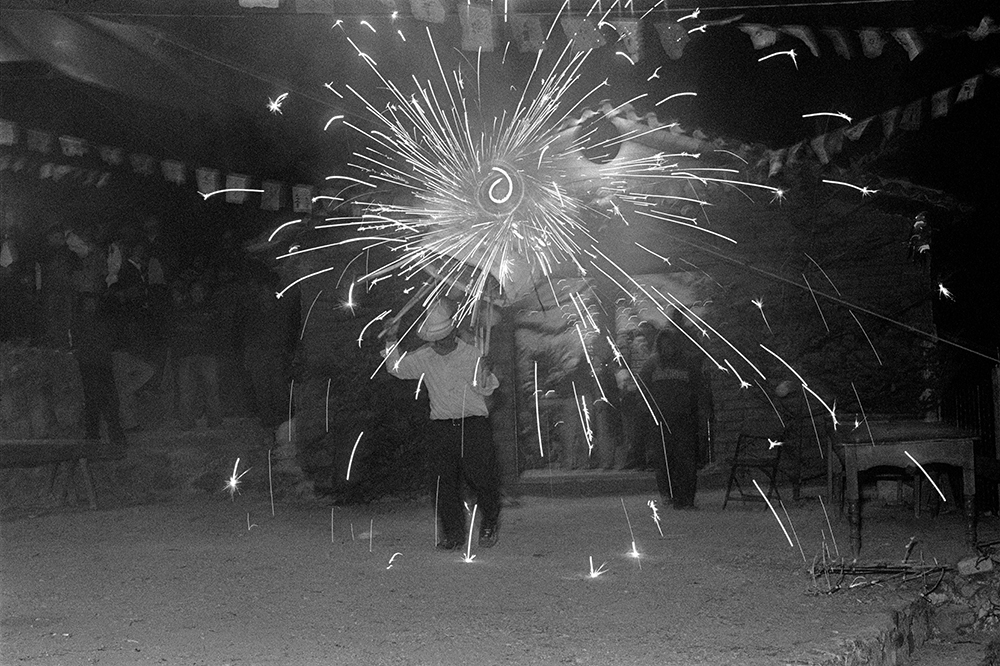 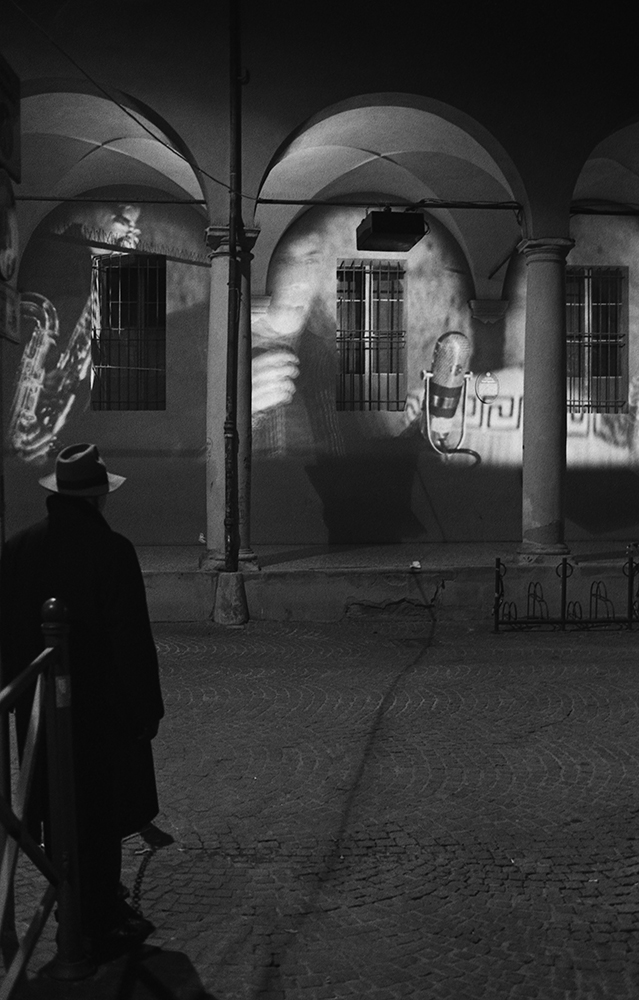 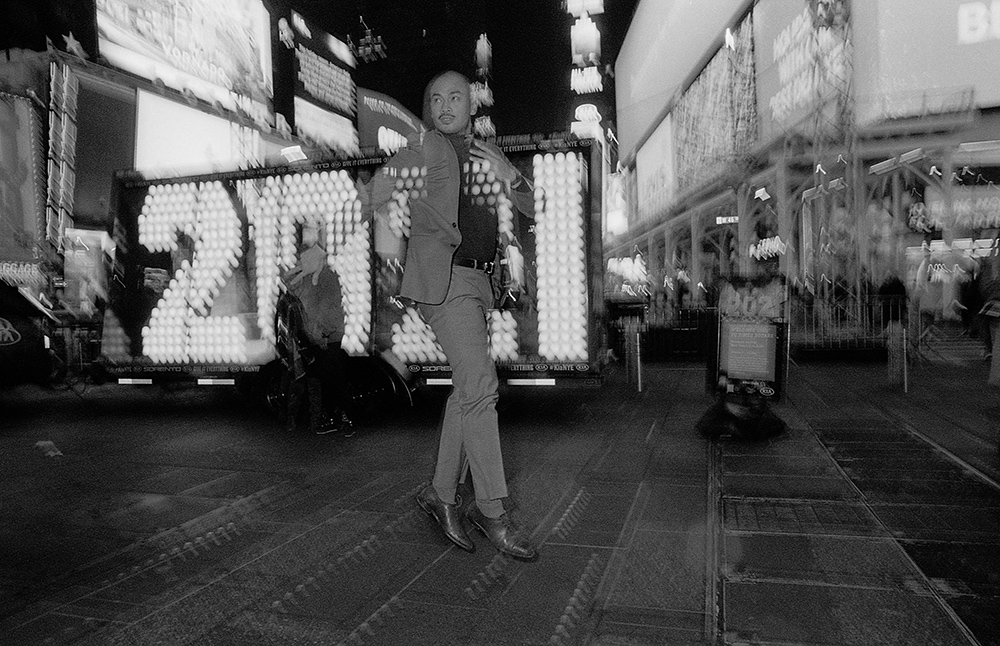