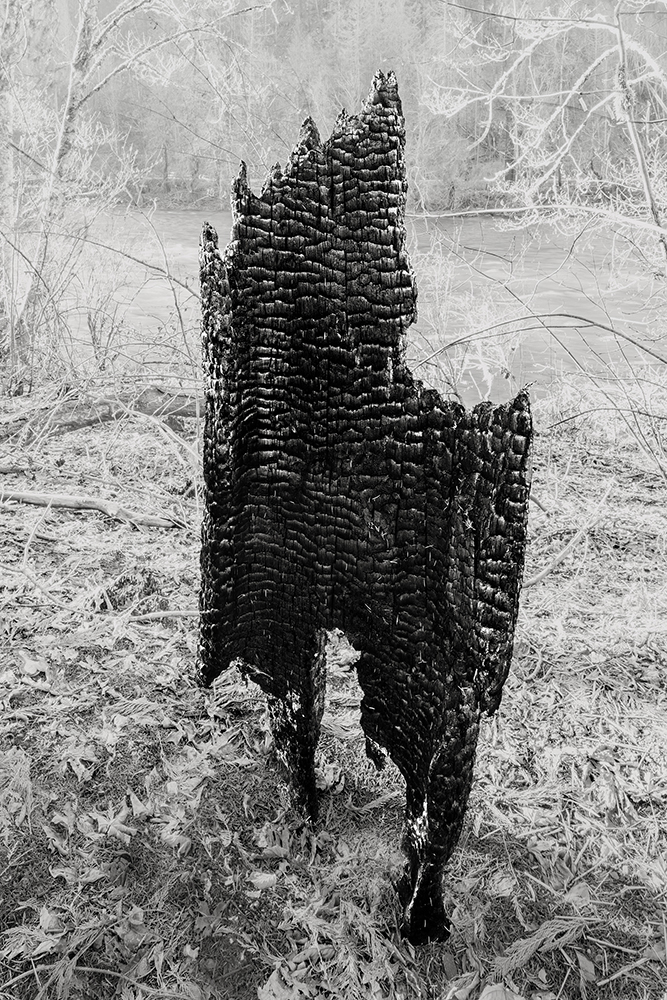 In the series Following Fire: A Resilient Forest/ An Uncertain Future, (2020 – present) photographer David Paul Bayles and scientist Frederick J. Swanson collaborate to explore post-fire landscape. The photographs by Bayles and text by Swanson contribute to their investigations of forest resilience in the face of increasing challenges and environmental uncertainties. By sharing this series of photographs, they add to the education, appreciation, and future of the forests.

This Following Fire project is part of long-term ecological inquiry based at the nearby H.J. Andrews Experimental Forest program where studies have been underway for 75 years, and experiments have design-lives of 200 years. In this spirit they intend to pass on the project, and even the photography equipment, to the next generations of photographer-scientist teams. 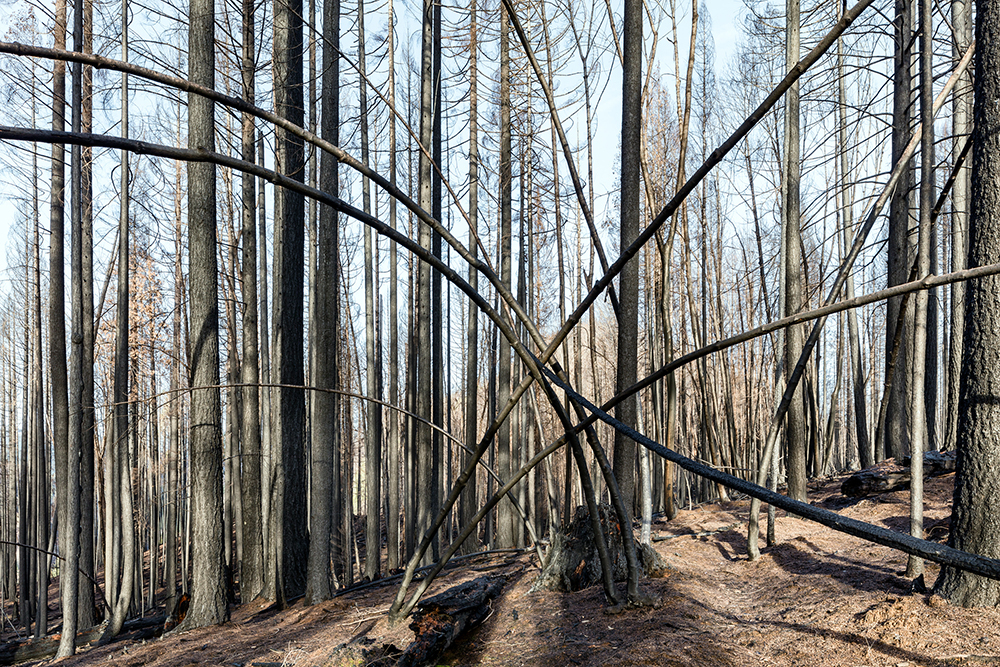 © David Paul Bayles and Frederick J Swanson, Forged by Wind and Heat, 2021. Fierce sustained wind during the fire bent the tall, thin trees. The intense heat dried them in this swooping position. 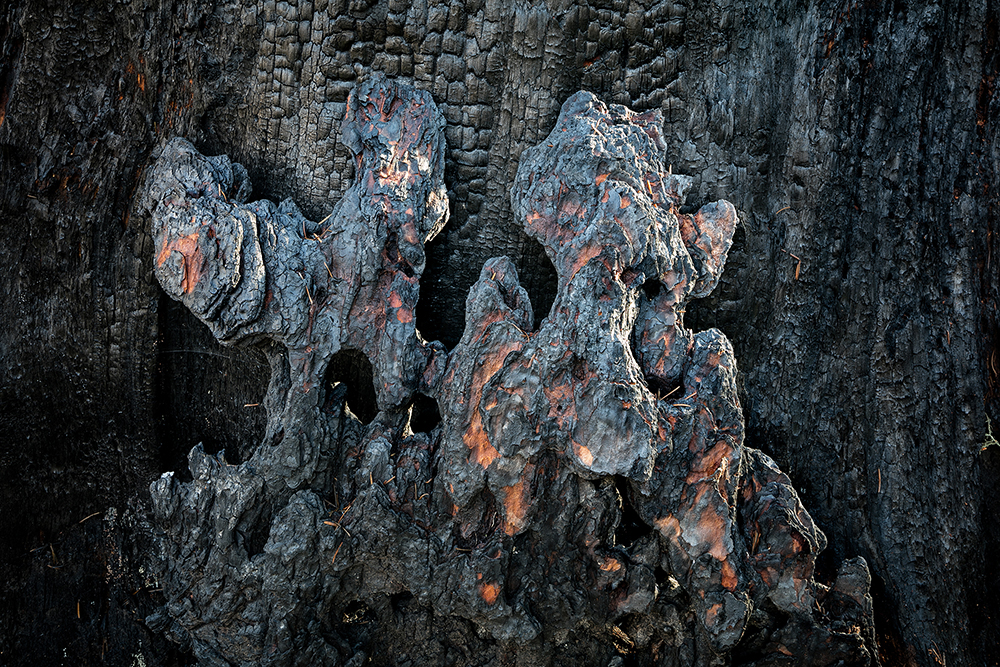 In September 2020, the Holiday Farm Fire, driven by fierce east winds, burned 173,000 acres along the forested McKenzie River canyon in the Cascade Range of Oregon. Two months later, Fred and I began a photography project to document the stark beauty of the burned forest and its vibrant response to fire.

Our collaboration combined my artistic sensibilities and Fred’s scientific focus on the biological and physical processes shaping forest history and the forest’s future.

A fresh view of fire and forests emerged based on four dozen site visits over two years. We use a variety of visual approaches to tell our story from traditional landscape documentary to a collection of 14 distinct typologies. Another approach called Chronosequence imagery is a staple of the science world. It tracks change over time by repeatedly visiting specific photo points. Fred selected 41 locations that we’ve visited every two months. While I photograph, he records observations in our field notebook. The last approach is a series of images that depart slightly from the documentary work in order to express my emotional response to the burned landscape. Each approach contributes in its own way to the unfolding story of a post-fire landscape.

To study how conditions of a forest at the time of fire influence forest response, we worked in two locations: Finn Rock Reach, site of a former logging camp along the river with rich, loamy soil, and Blue River Conservation Easement, a dryer, upland forest site. These are lands of The McKenzie River Trust, which kindly gave permission for this work.

Photographs and text weave a complex story of forest resilience in the face of growing challenges and uncertainties. Despite headlines describing the forest as “incinerated” and “vaporized,” more than 95% of carbon and nutrients were retained on site, allowing abundant plant life to spring forth over the first few growing seasons. This gives us hope. However, the future forest must contend with profound uncertainties: accelerating climate warming is scorching trees and increasing the extent, frequency and severity of fire; invasive species are displacing native species; and on-going intensive industrial logging, in combination with fire, may reduce the resilience of forests.

This Following Fire project is part of long-term ecological inquiry based at the nearby H.J. Andrews Experimental Forest program where studies have been underway for 75 years, and experiments have design-lives of 200 years. In this spirit we intend to pass on the project, and even the photography equipment, to the next generations of photographer-scientist teams.

By paying close attention to this particular portion of a forest life-cycle we are gathering and sharing a forest story rarely told. We let the forest speak for itself, through the photographs we’re making today and others will make in the future, in hopes of deepening appreciation of the beauty and mystery of forests everywhere, even after fire. 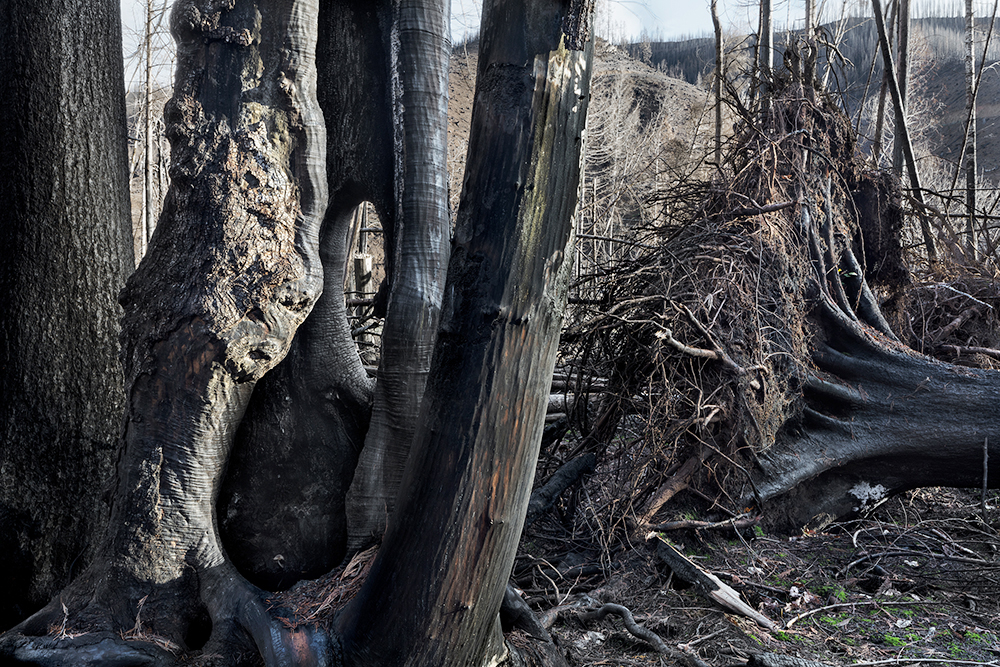 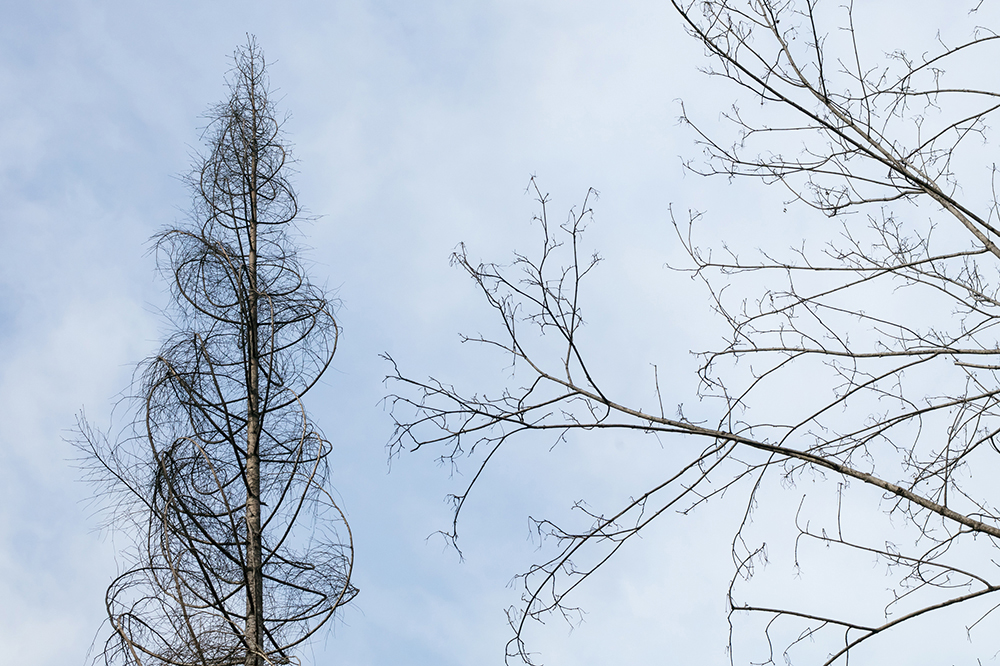 © David Paul Bayles and Frederick J Swanson, Canopy Heat Response #5, 2021, Conifer trees have different cell structures at the top and bottom of each branch. The theory is that as the intense heat rose from the forest floor the cells shrunk at different rates, causing the branches to curl atypically. The hardwood trees did not respond in the same way.

In an interview, I asked both Bayles and Swanson questions to shed more light on the future of this project.

LA: Is the project complete?

DPB: No. It will not be complete in my or Fred’s lifetime. Fred has been a scientist with the HJ Andrews Experimental Forest for over fifty years and I’ve been an ongoing artist in residence there for a few years. The Andrews is a place for long-term inquiry with a number of science research projects that have been ongoing for 60 years. They have passed from the original research scientist/team to younger teams. Fred and I began this project knowing we would pass our images, research, and observations on to other photo/sci team(s) building an archive at The Andrews and The Bancroft Library UC Berkeley.

A PNW Douglas fir forest reaches maturity at 150 years and becomes Old Growth at 400 years. One human lifetime cannot document the entire post fire story. It is deeply gratifying to think we are laying this foundation of images and observations that will outlive us.

LA: What have you learned that was not expected?

DPB: Fred has shared with me how the story changes with long term inquiry. He used as an example his 40+ year involvement with research on the eruption of Mt Saint Helens 40+ years ago. He was one of three scientists who were the first to be flown to the top of the mountain just a few weeks after the eruption. There is a story after one year of observation. There is another story after five years of observation. And the story is different at the decade mark and so on.

For me, when I visited the forest two months after the fire and observed the beauty of the forest in this skeletal state. I could not imagine anything growing. It was so complete to me, in a way, in that state. When Fred began to pick the Photo Points, we would document every two months and talk about vegetation succession, I could barely imagine a few green plants growing. Six months later I stood surrounded by vegetation and lots of fireweed that was 6-7 feet tall. It was profound in a way that, I believe could only have happened to me because of the many site visits and this patient, consistent form of observation.

One additional tidbit. Oregon governor Kate Brown created funds for a gathering of fire forest scientists on Feb. 8th. that will convene for two days of research sharing by 150 scientists on site and 200 additional via zoom. Fred and I offered to give an evening presentation of our project with the goal of connecting with scientists who have special knowledge about very specific pieces and parts of our project. As a disturbance ecologist Fred is more of a broad-brush scientist, so there is much to learn about specific biological processes that we witness and photograph. 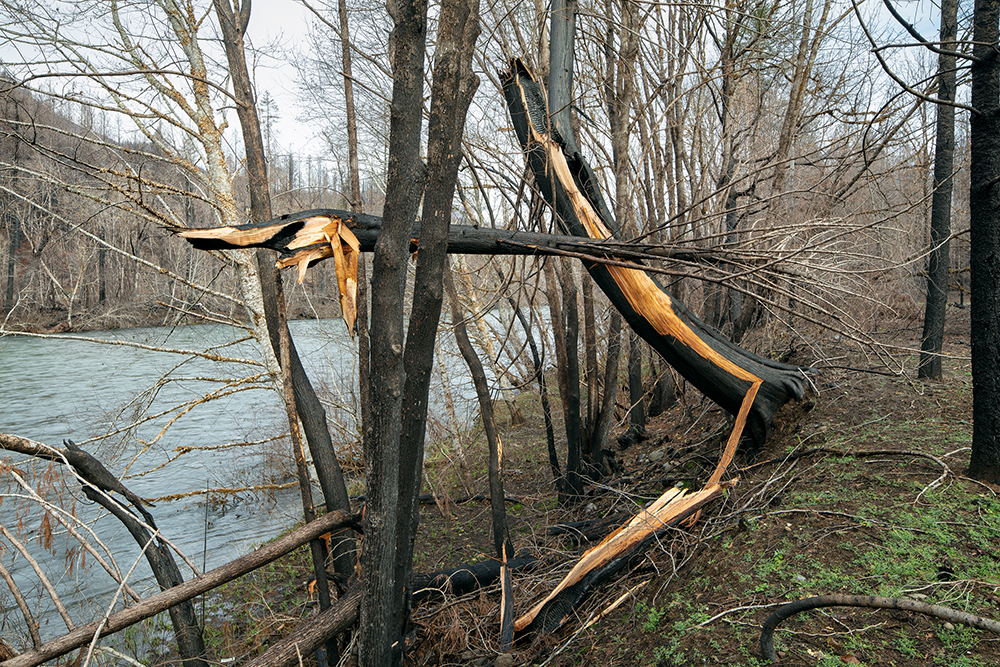 © David Paul Bayles and Frederick J Swanson, Windsplit, 2021, Weakened by the fire, many trees uprooted or snapped off in winter storms that followed the fire. It is part of the process of returning organic matter to the forest floor.

Photographer David Paul Bayles focuses on landscapes where the needs of forests and human pursuits often collide, sometimes coexist and on occasion find harmony. Some of his projects utilize a documentary approach while others use a more contemporary art practice.

Bayles’ deep connection with trees was forged in the mid-seventies when he left the suburbs of Los Angeles to work four years as a logger in the Sierra Nevada mountains. A month before leaving the woods for photography school David was chased down a steep hill by a large log.  His instinctive, snap judgement, saved him from being crushed by the rolling log, punctuating the four-year physical experience with a profoundly spiritual one.  While attending photo school in Santa Barbara, Bayles became committed to environmentalism. His dual perspectives of logger and environmentalist add an authentic and unique approach to his photographic projects.

He currently lives and photographs in the Coast range of western Oregon, where highly efficient industrialized working forests supplanted the massive old growth forests many decades ago.

His photographs have been published in numerous magazines including Orion, Nature, Audubon, Harpers, Terrain, Commonweal, Outside, The L.A. Times Sunday Magazine and others. Public collections include The Portland Art Museum, Jordan Schnitzer Museum of Art, Santa Barbara Art Museum, The Harry Ransom Center, Wildling Museum and others. His first monograph, Urban Forest, Images of Trees in the Human Landscape was published in 2003. His next book Sap In Their Veins will be published in fall 2023. The David Paul Bayles Photographic Archive was created in 2016 at The Bancroft Library at UC Berkeley to archive his entire life’s work. 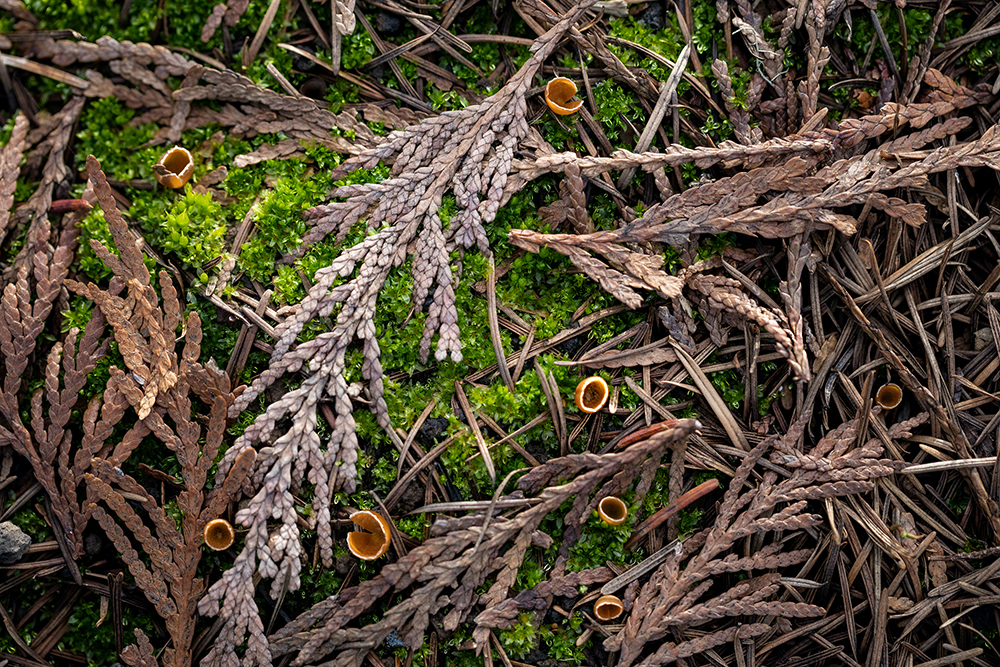 © David Paul Bayles and Frederick J Swanson, Pyrophilia, 2021, Two weeks after the fire is out filamentous fungi begin to permeate the soil. They’re followed by the neon green fire moss growing on top of the soil. Together these two pyrophilia (fire-loving) plants help prevent erosion in post-fire landscapes.

Fred Swanson is a retired ecosystem scientist with the Pacific Northwest Research Station of the US Forest Service and a Senior Fellow with the Spring Creek Project for Ideas, Nature, and the Written Word, based in Oregon State University. As part of Spring Creek, he has facilitated the engagement of writers and artists with the science programs and wild landscapes of the H.J. Andrews Experimental Forest and Mount St. Helens in the Cascade Range of the Pacific Northwest.  Trained as a geologist and specializing in the study of disturbance agents in forest ecosystems and watersheds (wildfire, floods, landslides, volcanic eruptions, clearcutting, and forest roads), it has been natural to connect with human disturbance agents – artists and poets. Some outcomes of these collaborations are reflected in the books Danger on Peaks (Gary Snyder, Counterpoint, 2004), In the Blast Zone (Goodrich and others, Oregon State University Press, 2008), and Forest Under Story (Brodie and others, University of Washington Press, 2016). 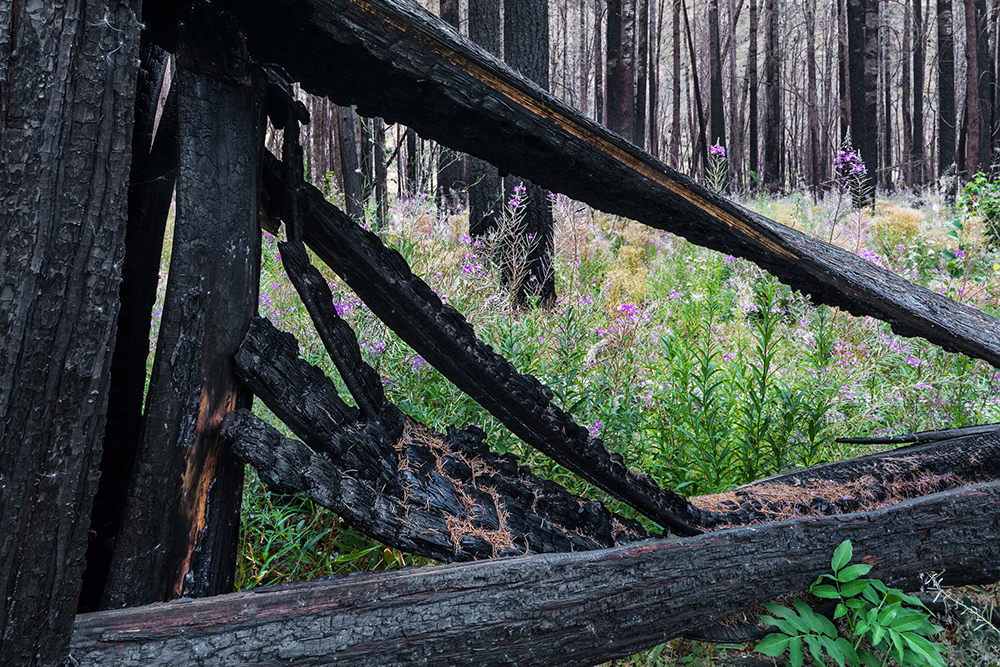 © David Paul Bayles and Frederick J Swanson, Collapsed Tree and Fireweed, 2021 Within nine months of the fire, much of the landscape was covered in fireweed. A formidable pyrophilia, some plants grew to seven feet tall with gorgeous purlple flowers. Each plant produced thousands of seeds 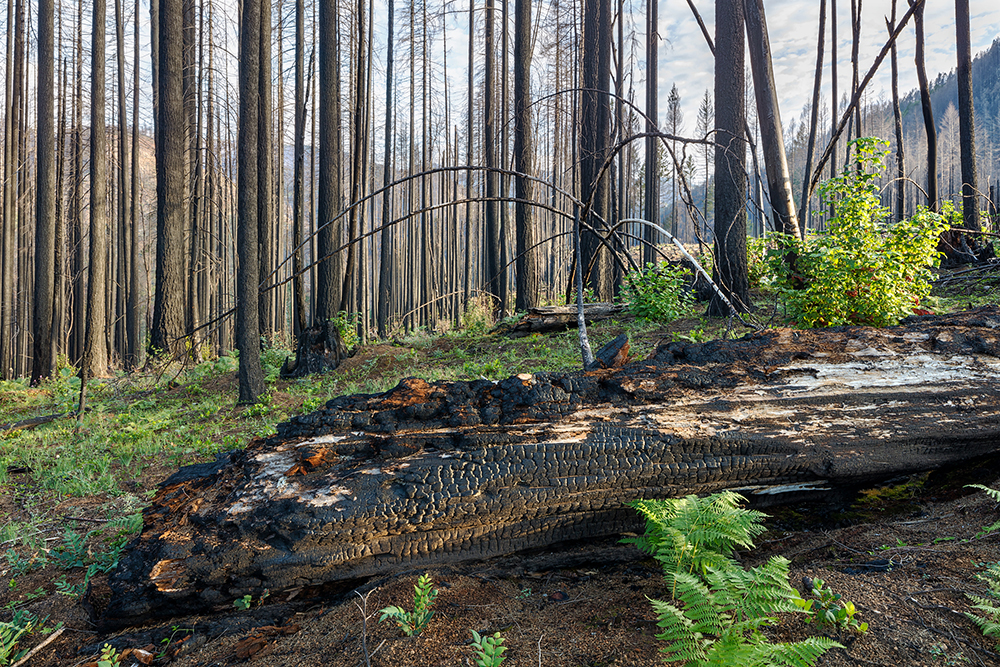 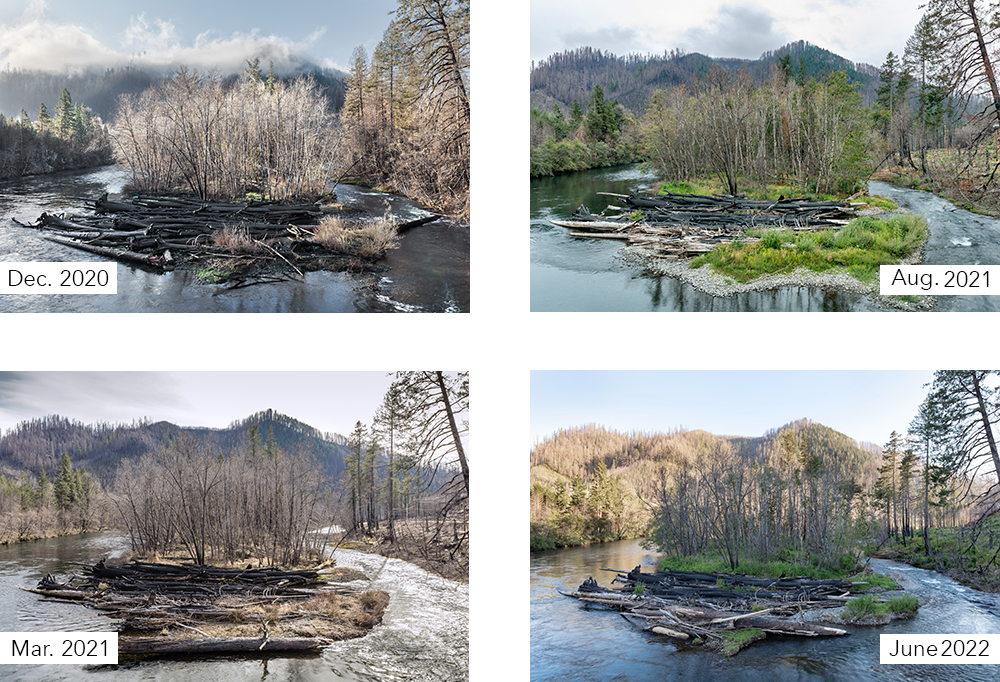 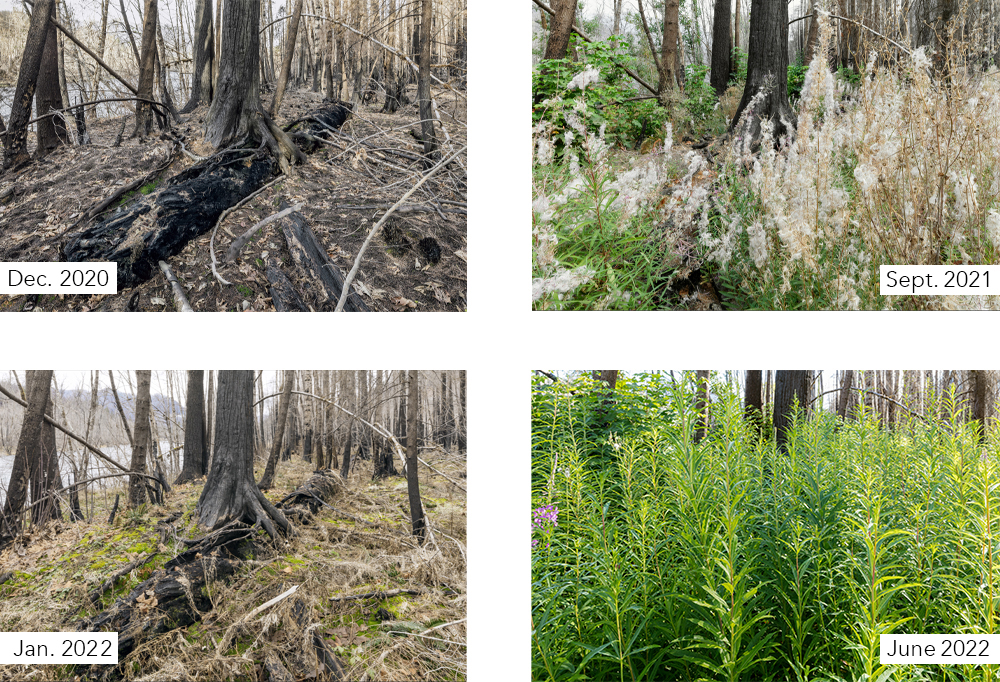 © David Paul Bayles and Frederick J Swanson, Photo Point #17, 2020-2022, The abundant fireweed growth is spectacular but also notice the amount of organic matter that begun to build on the forest floor after the first growing season from December to January. 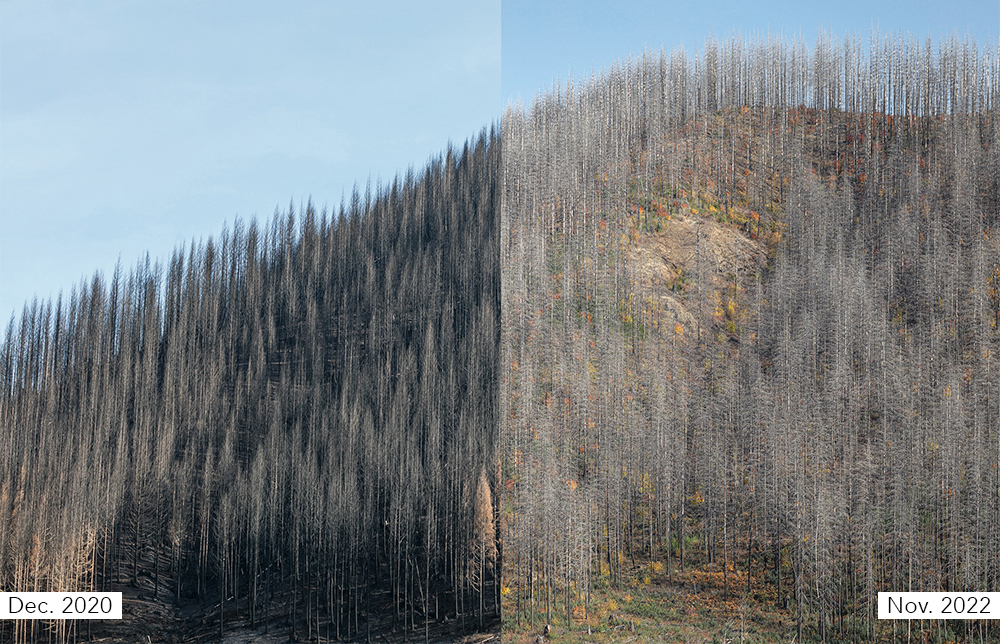 © David Paul Bayles and Frederick J Swanson, Uncertain Future #1, 2020-2022 This hill is adjacent to our Finn Rock Reach project site and it is privately held timber land. As we face a warming climate, single species forestry with herbicide applications reduces the diversity and complexity that resilient forests depend on. 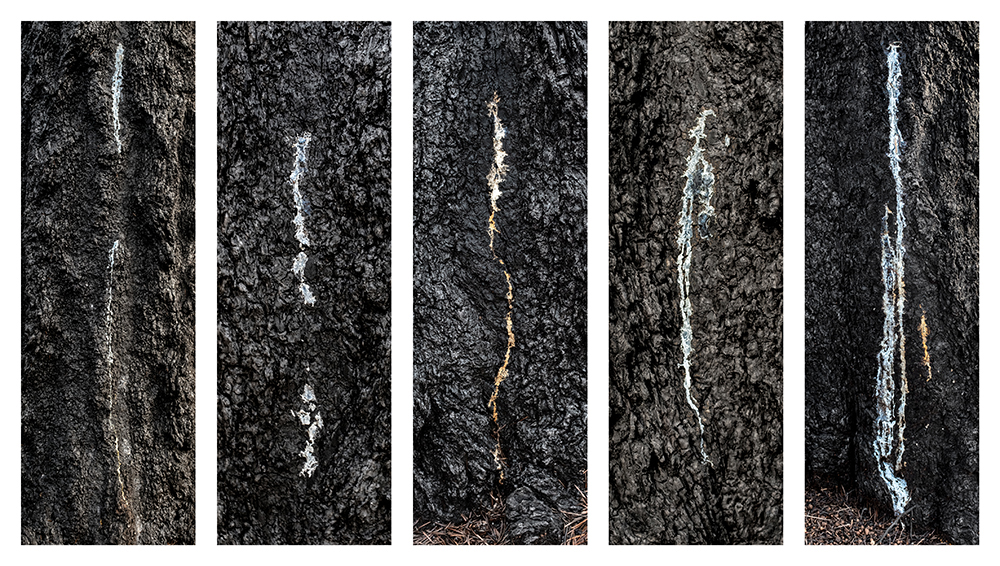 © David Paul Bayles and Frederick J Swanson, Exudate, 2021 After all the scorched needles were cast off, the stark white exudates began oozing down the blackened bark, an indication that some biological processes were going on and maybe the trees would survive. The next spring we learned that most did not. 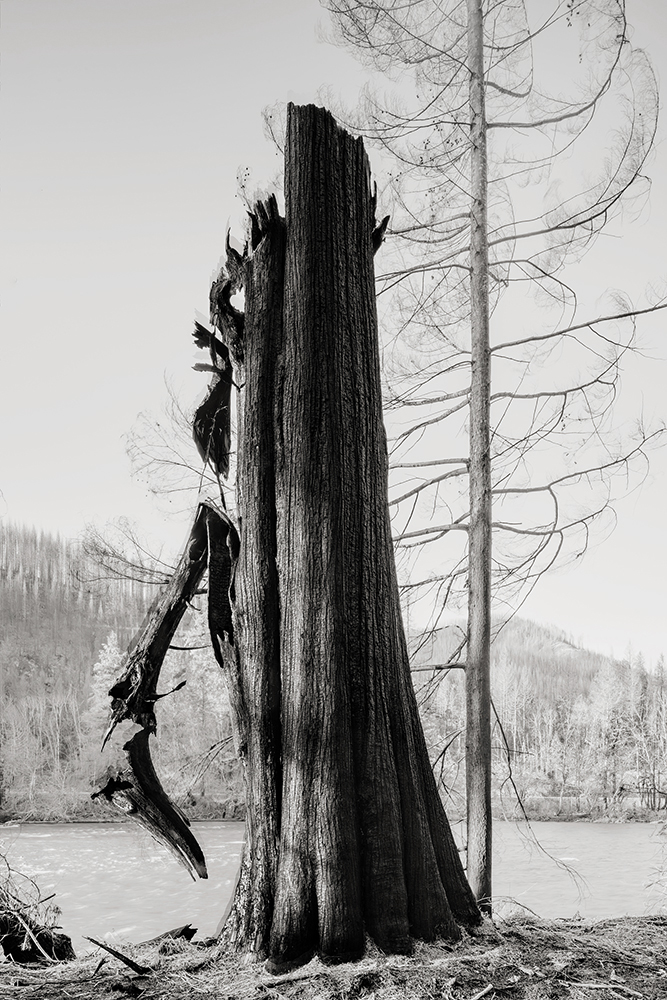 © David Paul Bayles and Frederick J Swanson, Standing, Still. #2, 2020 For two hundred years the cedars that line the bank of the river were battered by erosion, upriver and downriver winds. They were survivors. The fire came, and the trees died. In their sculpted remains, I could feel their survivorship and decided to make their portraits.