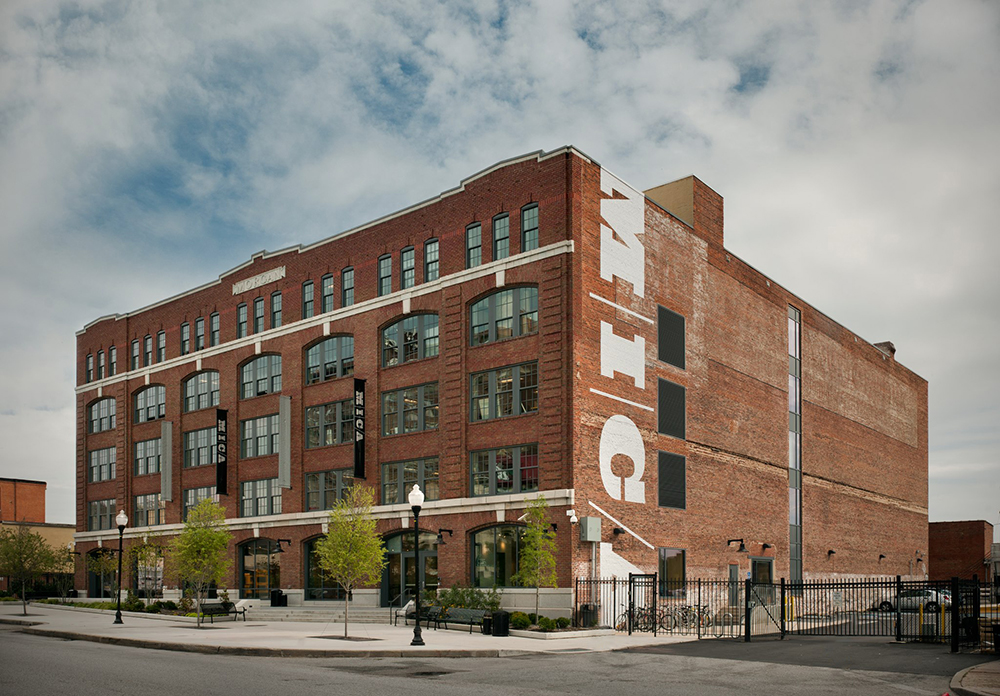 Photographic Artist Nancy Edelstein took the plunge this year and returned to the the classroom as an MFA Candidate at MICA – Maryland Institute College of Art. I was curious about her experience and she graciously offered to share this year’s journey, with additional posts to follow. – Aline Smithson

Back to School – Really?
On Being a “First Year” MFA Candidate

Returning to college for an MFA degree had never occurred to me until just last Christmas when a few photography friends were over for dinner. I had just completed a handmade photographic book project and was showing it to the group. One of the teacher/photographers looked through it slowly and finished by saying that I really could use this as my portfolio to apply to any graduate school. Out of the blue, those words for me sparked excitement and intrigue. I was already up for a what’s-next challenge. I had noticed with envy the confidence that young kids coming out of college had with their MFA degrees and that I was lacking, even after my measly BFA and decades of picture-making. I knew going back to school would be impossibly challenging and that it was pretty late in the game for me to take on something so unknown. But if not now, when? I gave myself until the first of the year to think about it.

I had heard about interdisciplinary MFA programs, designed with a shared curriculum for all the combined art practices. This approach encourages a crossover of work made within the various art mediums. I was ready to get my work off the wall, outside the frame and into three-dimensional space, and interdisciplinary study seemed like an opportunity to explore all of this. I was also looking for an academic program to gain a deeper understanding of art history and contemporary art critique, and a community to discuss this with. Finally, I was thinking that going back to school would be a gift to myself, allowing me the time and structure to go beyond my own restraints and hopefully find new freedom within my practice.

The downside, of course, was that I could fail. But I knew that I would only be doing this for myself, so pleasing others and being measured by outside standards should not be a driving factor—and that turned out to be something I would constantly need to remember. 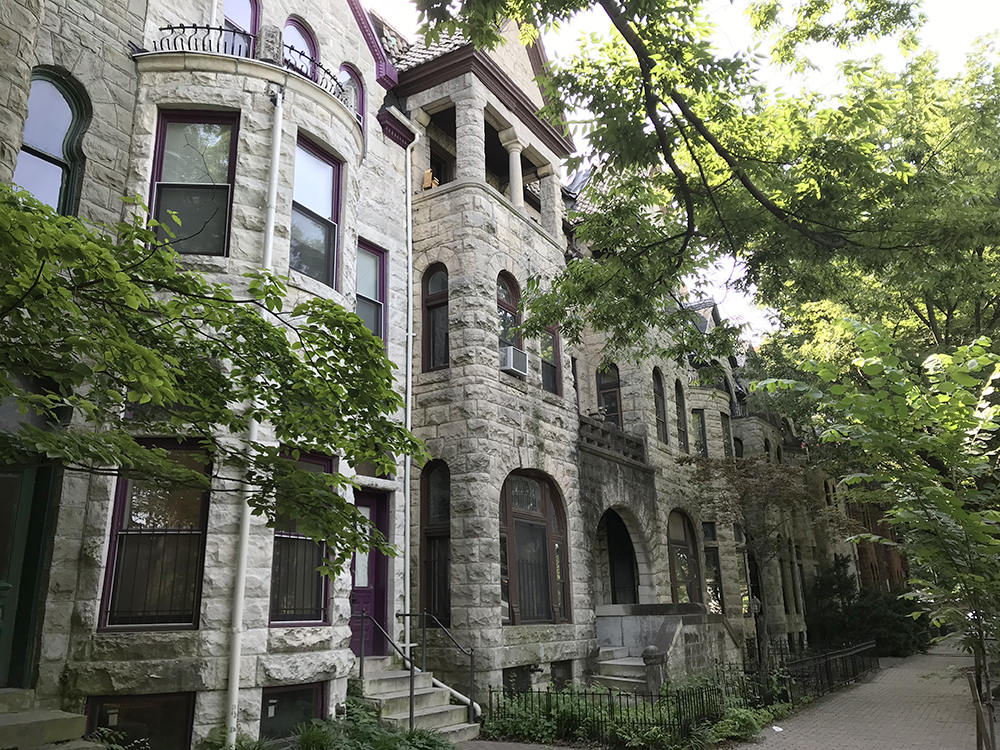 ©Nancy Edelstein, On my daily walk to school

On New Year’s Day I looked online to see what was out there. I began by searching specifically for Low Residency MFA programs around the country. These programs were first offered back in 1963 to allow teachers to acquire advanced degrees during their summer vacations. Usually they are structured with an intensive six-to-eight-week residency on campus in the summers, and continued art practice and academic work back home for the rest of the year. Some of the programs are three summers long with two years in-between, and others have an additional year of each. While I’m not a teacher, this structure worked best for me, as I do have family commitments and connections at home. Low Residency programs generally take longer than the traditional two-year MFA programs, but since I was not in a hurry, the timeline seemed perfect: it would allow me more time to develop both during the summers away and at home.

The big surprise, and slight disappointment, was that I had already missed many of the December deadlines for applying to some of the really great art schools. I knew if I was going to do this at all, it would be best to begin right away. Fortunately, there were still many excellent choices available. Comparing the different programs online was extremely confusing, with each school presenting its program in its own way buried deep within its website. I eventually made a chart to manage it all and relied on that throughout the process. Unfortunately, I didn’t have much time to digest the information, since most of the applications were due by the end of January or February. Choosing which schools to consider (I hadn’t heard of many of them) led me to confer with knowledgeable friends as well as to consult the “Best MFA Schools in the US” articles online. 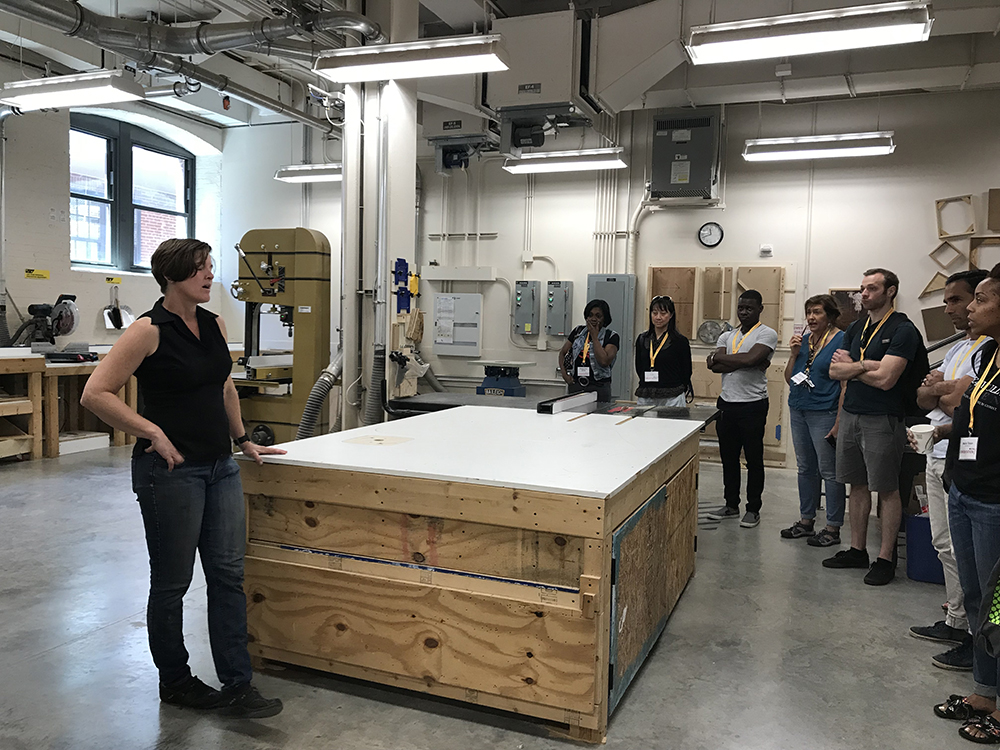 Luckily, my original first-choice program was still accepting applications for two more weeks, so I scrambled to write an essay and gratefully collected my two wonderful references, dug out the ancient undergraduate transcript that was required, and formatted my book pages to accommodate the portfolio specifications. I submitted all of this on time and was prepared to leave it up to fate.

In the meantime, I found some other schools online that sounded great, although less familiar to me, and they were still accepting applications. I also realized that my first-choice school, while top-rated, was possibly not the best fit for me after all. It had a large program size, over 125 students, and seemed quite competitive—neither attribute signaled an atmosphere in which I would thrive. With a bit more research, I chose two more schools and applied to them as well, using the same application materials I had already gathered. Not long after, I heard from each of the schools by phone: my first choice with an acceptance, and the other two with requests for Interviews. 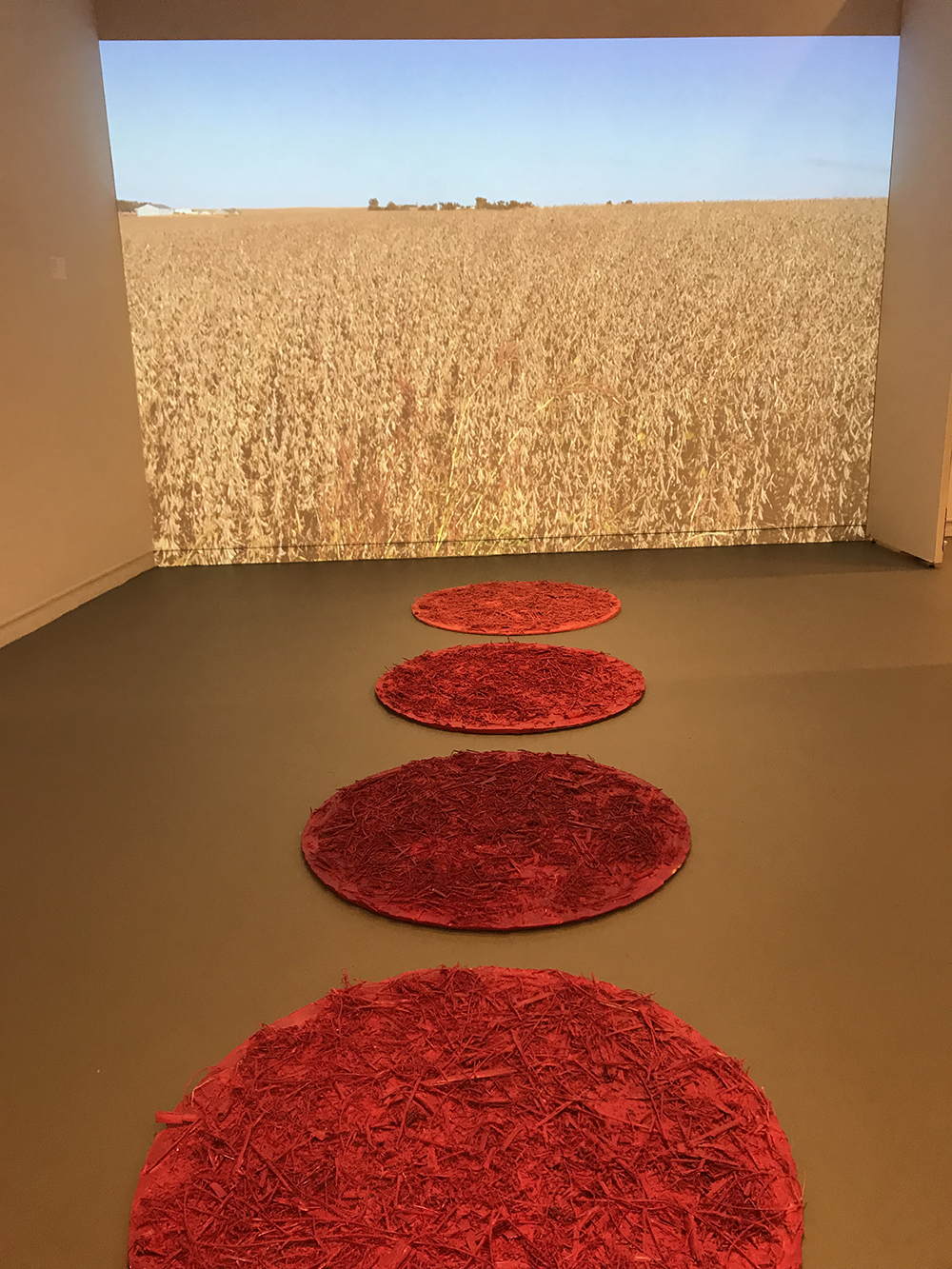 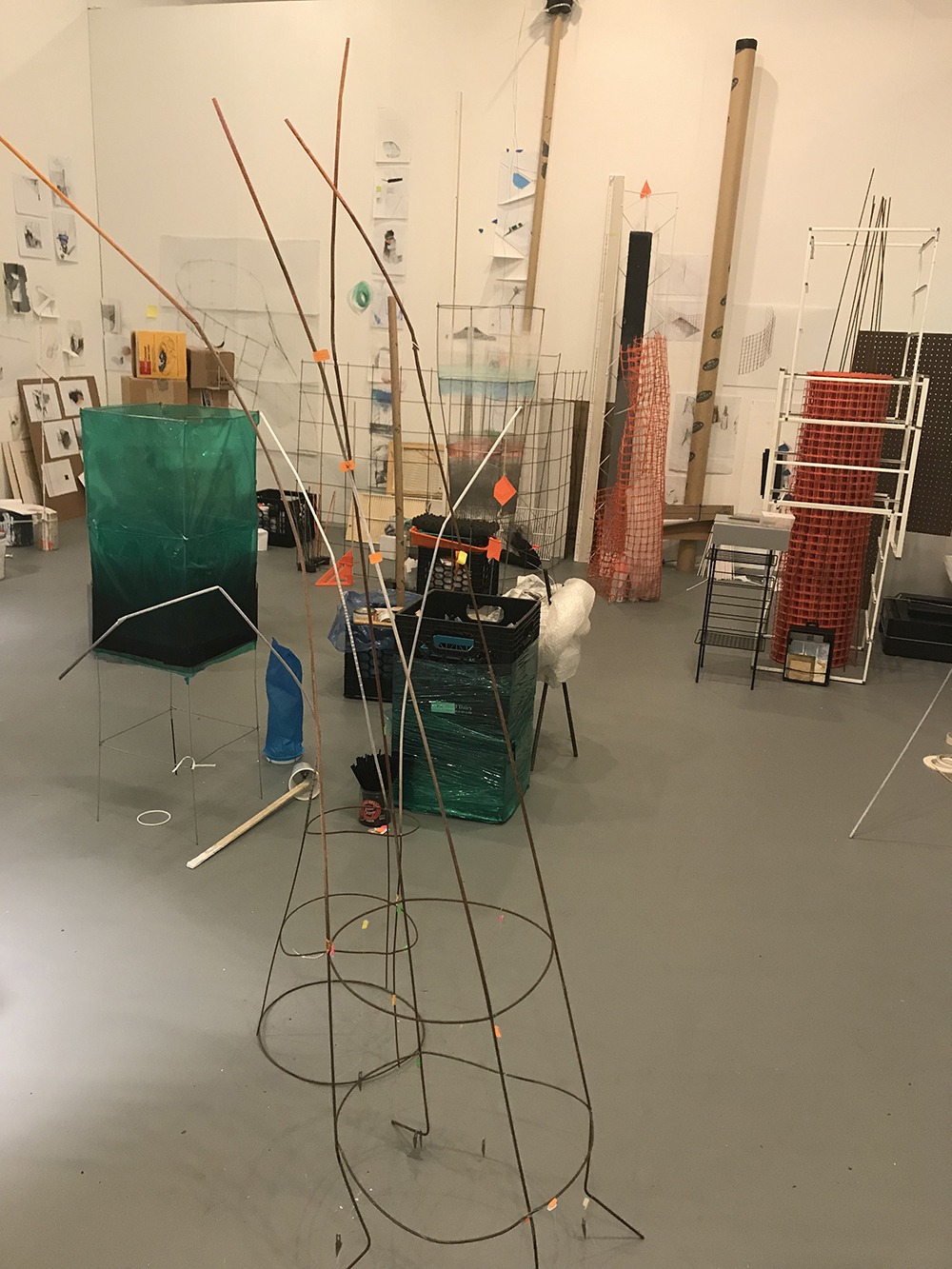 The idea of an interview on Skype with the entire faculty of the department grilling me was confronting, and I resisted all the way. In the end, it was indeed intense, but the best way for me to distinguish between my choices, and in hindsight I wished I had had that opportunity with all three schools. The interviews made my decision clear, and I surprised myself by selecting the program at MICA – Maryland Institute College of Art, in Baltimore, based on the sense that I got from its committed faculty, size of program (40 students total with 10 per class), thoughtful curriculum, mentor relationships, and academic rigor. It clearly would be the biggest challenge for me but felt like the right choice. 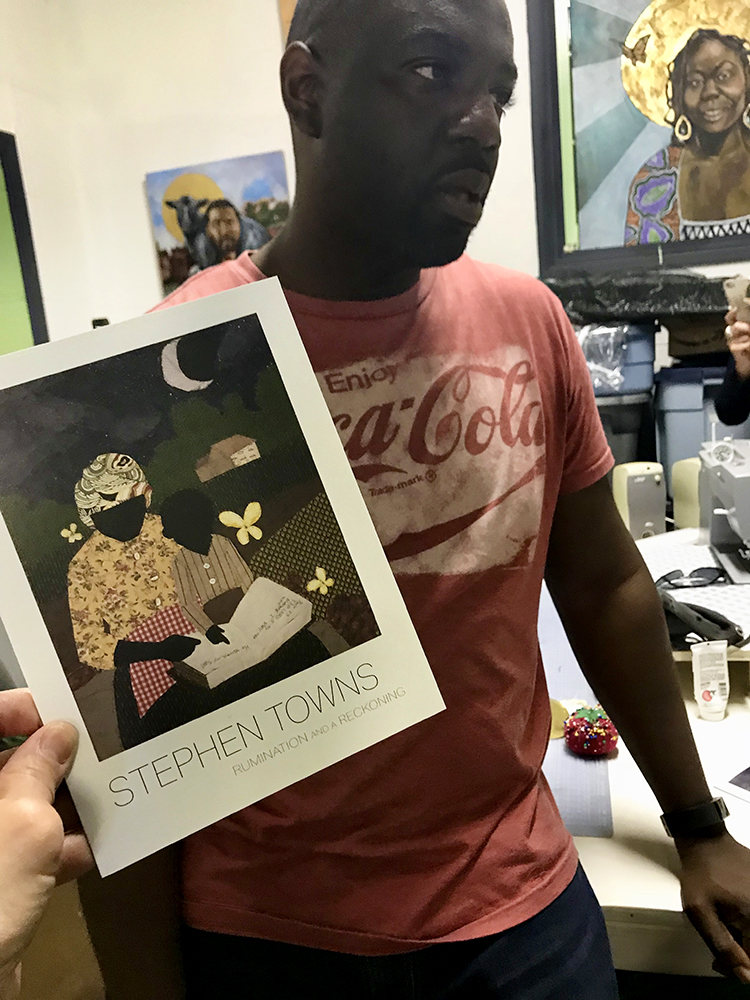 For six weeks this last summer, I was a student in Baltimore. I lived in a dorm with others in my program. It was a diverse group, both ethnically and in age, ranging from me and a couple other women as the oldest to some recent college grads. The summer was as intense as I thought it would be. At times it felt like I barely got by. There were many requirements, and beyond that, many additional opportunities. The intensity came mostly from my own self-expectations. Of course, I wanted to do it all. Weekly, the program included studio practice and mentor meetings; critical studies reading, writing and a day of class; visiting artist presentations followed by individual studio critiques; professional development classes; and a choice of fabrication workshops. Additionally, there was the graduating class thesis show to attend and three evenings of thesis presentations from those students, followed by a second/third year show, and a three-day final critique with the whole group participating. And then there was a party to celebrate. 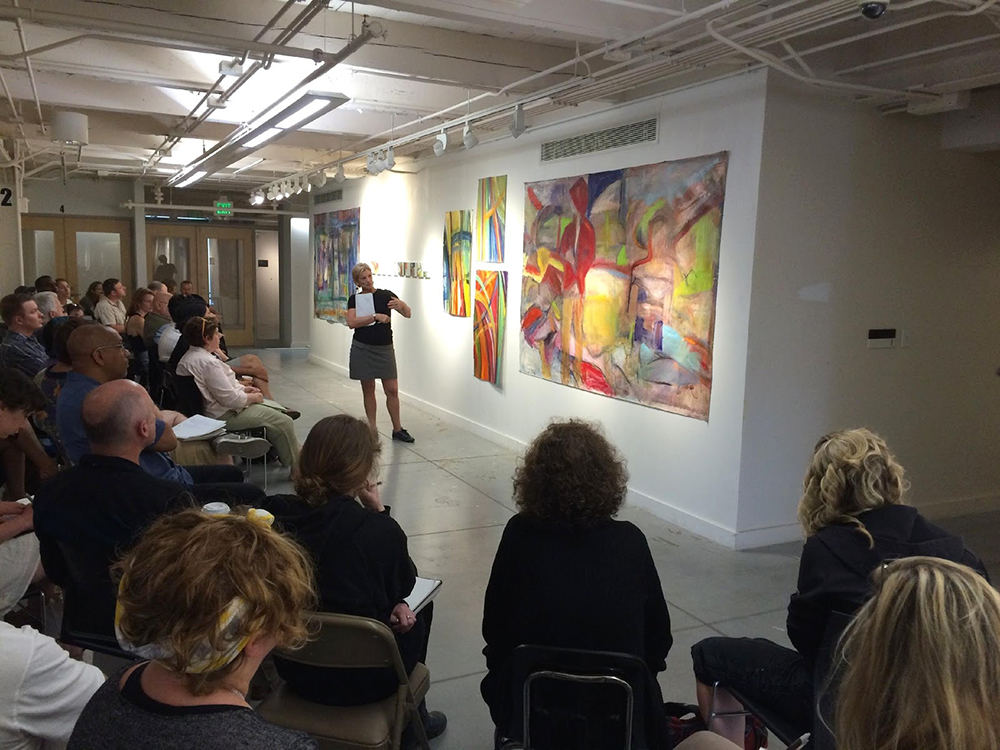 What I’ve learned from this program so far has much more to do with myself than any new tool or skill specific to art-making. Primarily, graduate school has opened up my understanding of contemporary art practice as a result of its connection to the past half-century of US and world issues, and it’s led me to examine my own work in a way I had never thought of before. All summer, at the suggestion of my mentor, I experimented in the studio, distinguishing the difference between “illustrating” and “demonstrating” the ideas in my work. The freedom I felt in approaching art-making in such a new way led me back to my recurring interest in light, shadow and space. I also became interested in the idea of rediscovering the familiar in unfamiliar ways. My final project was an installation of pins in all the existing holes in my studio walls. Viewers were invited into the darkened pin-lit room, slowly to discover the unexpected glistening shadows surrounding them.

Now that I’m back home I continue to explore new ideas, while appreciating the support of my classmates and the insightful notes from my final critique; they remind me, when I get stuck, of what I discovered as a “First Year” in Baltimore this summer. 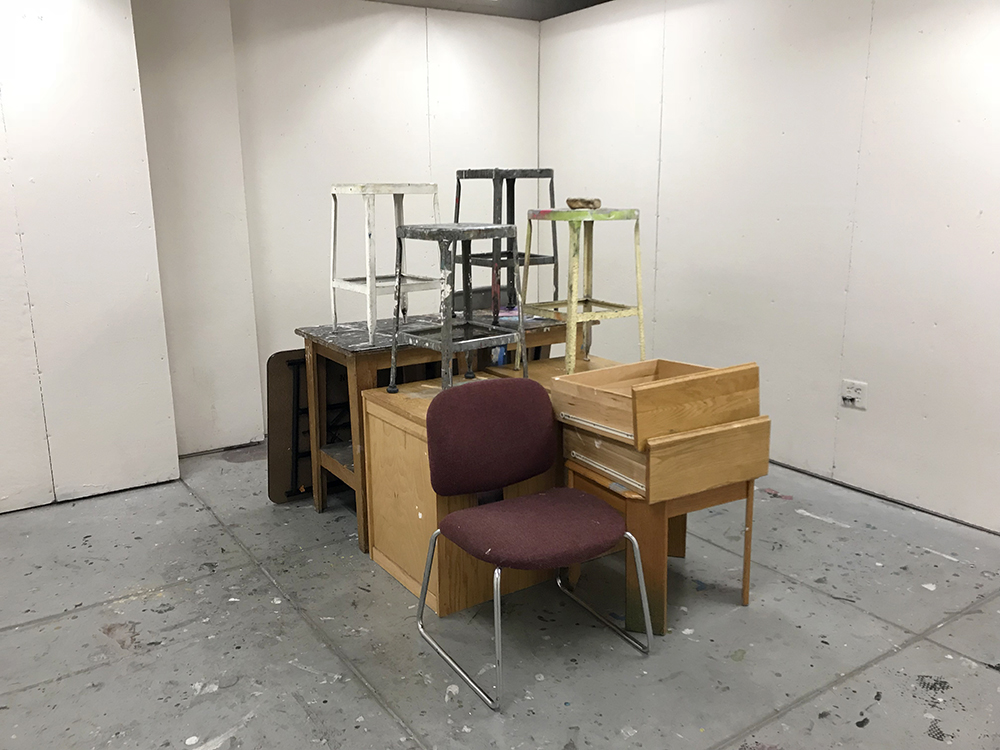 In her work as a conceptual fine art photographer, Nancy Edelstein has engaged in multiple genres: landscape, interiors, still-life and environmental portraiture – exploring the idea of memory, perception and light. Her photographic fine art prints and hand-made artist books have been exhibited nationally since 2001. Graduating with a B.F.A. from the University of Michigan, she founded a nationally recognized design firm where she was acting art director for many years. She then turned her interest to custom book design, creating one of a kind volumes for prominent families and corporations. Nancy returned to a devoted art practice eight years ago, engaged in interdisciplinary exploration. As an avid learner, she continued her studies under the guidance of Lucas Samaras, Marie Cosindas, Mary Ellen Mark, Keith Carter, Aline Smithson and others.

Nancy is currently an MFA 2021 candidate at Maryland Institute College of Art. She lives and works in Seattle, Washington.