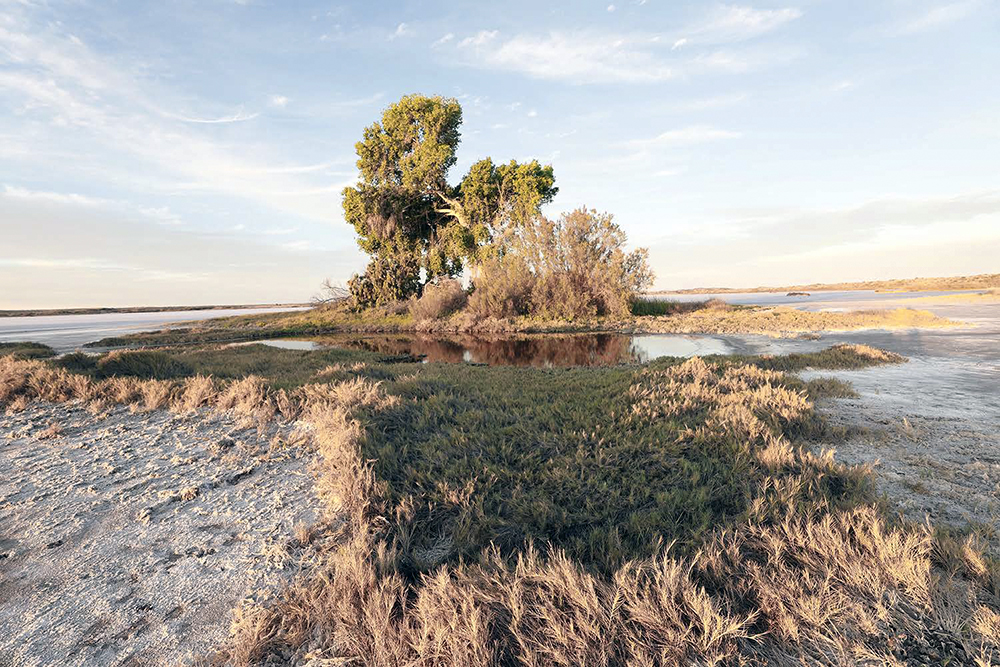 Bremner Benedict is a photographer based in West Concord, MA and Tucson, AZ. Her work addresses the shifting connections that humans have with landscape and the impact they are causing within the natural environment. In her most recent series Hidden Waters : The Uncertain Future of Desert Springs, (2014-ongoing) Benedict documents desert springs within the American West and Northern Mexico.

She begins by studying maps of where springs are marked, records their GPS coordinates, then begins her journey. Her photographs document the current conditions and predicaments of springs, from unaltered, restored, heavily altered, destroyed, to springs that are drained dry. There is a quiet beauty to this work. My immediate response was stilled as I searched within each photograph for what remains and what has been lost. 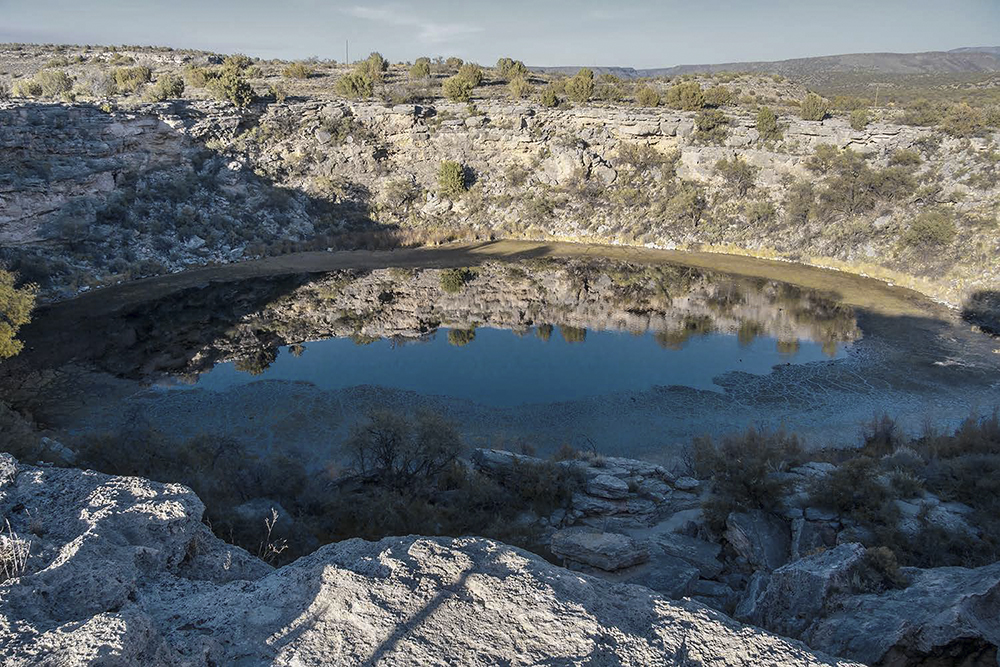 ©Bremner Benedict, Upper Sonoran Desert – Montezuma’s Well, Verde Valley, AZ. 1,500,000 US gallons of spring water emerges daily to fill this collapsed travertine spring mound. The Well is a stopover for waterfowl, including Cinnamon Teal ducks, Mallards, and Coots. It contains at least five unique species such as endemic diatom, a springsnail, a water scorpion, an amphipod, and a new genus and species of leech giving it the highest number of unique species of any single spring in North America. Cliff dwellings on the walls evidence human use from 600 AD.

Roughly 50% of desert springs in the West are gone, “Hidden Waters / Desert Springs, An Uncertain Future” are images of what remains of arid and semi-arid desert wetlands. Despite being threatened, their ecosystems contain some of the richest diversity of plant and animal life on the planet and they hold 20% of the world’s endangered species. Called ‘windows into the earth’ springs reveal the quality and endurance of their aquifer’s water.

My interest in desert springs sparked while in Arizona, when accompanying a biologist on a springs inventory field trip where I discovered an entire world teeming with vitality living within a trickle of water. I was drawn to this vulnerable yet essential detail of life whose under-recognized value makes them susceptible to over-use and long-term drought. I’ve learned springs’ classifications, ecologies, human and geologic histories as well as their cultural significance. To locate springs, I search databases and maps while talking to ecologists and locals.

It takes large cups of coffee to support long drives to remote locations. Awaiting sunrise or an afternoon’s shifting light, allows me time to experience the contrast of a pastel parched landscape with a tuft of green holding a promise of water, the reason why a spring becomes sacred as a life-sustaining gift.  I reduce color from the photographs to suggest their precarious existence and uncertain future. Springs are an emblem of why we need to think more long term since once they are gone most of desert life will vanish with them. My intent is to draw attention to protecting desert waters as they could serve a function beyond what we presently imagine. 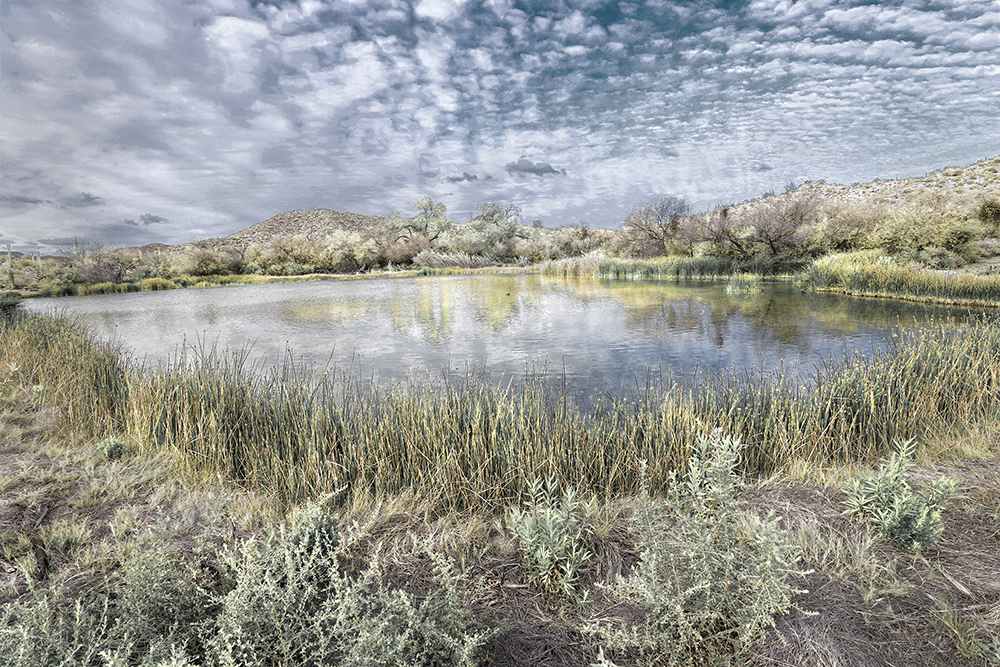 ©Bremner Benedict, Sonoran Desert – Quitobiquito Springs, Organ Pipe National Monument, AZ. Made of melted Ice Age water the springs are the only dependable water source in this driest part of Arizona. A wildlife supporting oasis, it’s home to two endangered species, the Quitobiquito Pupfish and the Sonoyta Mud Turtle. Important since the prehistoric era, it’s sacred to the Tohono O’odham tribe on their trans-national Salt Pilgrimage. Being at the edge of the US Mexico border the spring is threatened due to intensive water use in building the Border Wall. 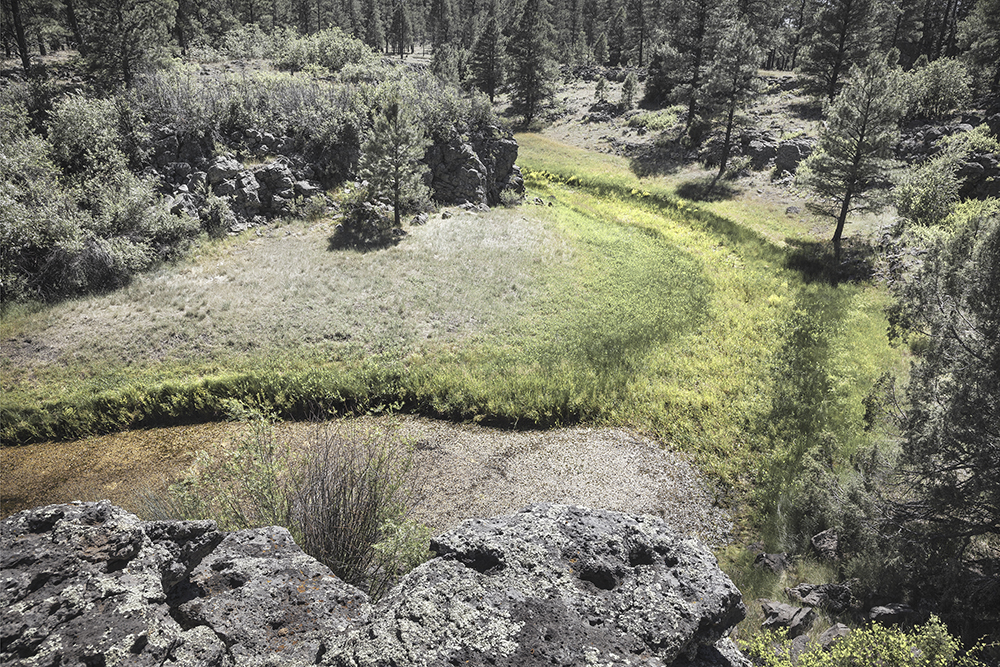 ©Bremner Benedict, Colorado Plateau – Garland Prairie, Dow Springs, AZ. Petroglyphs in the canyon show prehistoric peoples used these springs. In the 1870’s it was an overland trail water station which became a short-lived, small-town due to abundant and reliable springs. Water flow measurements since the 1980’s shows a decreasing water table.

Bremner Benedict’s photographic series, Distant Places, Gridlines, Re-Imagining Eden. address the shifting connection we have with landscape and its impact on the environment. In 2015, Benedict began Hidden Waters / Desert Springs – An Uncertain Future. This project covers springs and seeps of the arid and semi-arid deserts of Western North America. Benedict’s intent is to engage the public to reassess our  relationship with water use in the West.

Project portfolios are at Fidelity Art Boston, Center for Photography, Tucson, New Mexico Museum of Art, Decordova Museum of Art and Sculpture, Lincoln, MA, Fogg Museum at Harvard, George Eastman Museum of Film and Photography and private collections. In 2020 work from Hidden Waters will be seen at, New England Regional Exhibit of the FENCE, Boston, MA and the A Smith Gallery, Johnson City, TX. 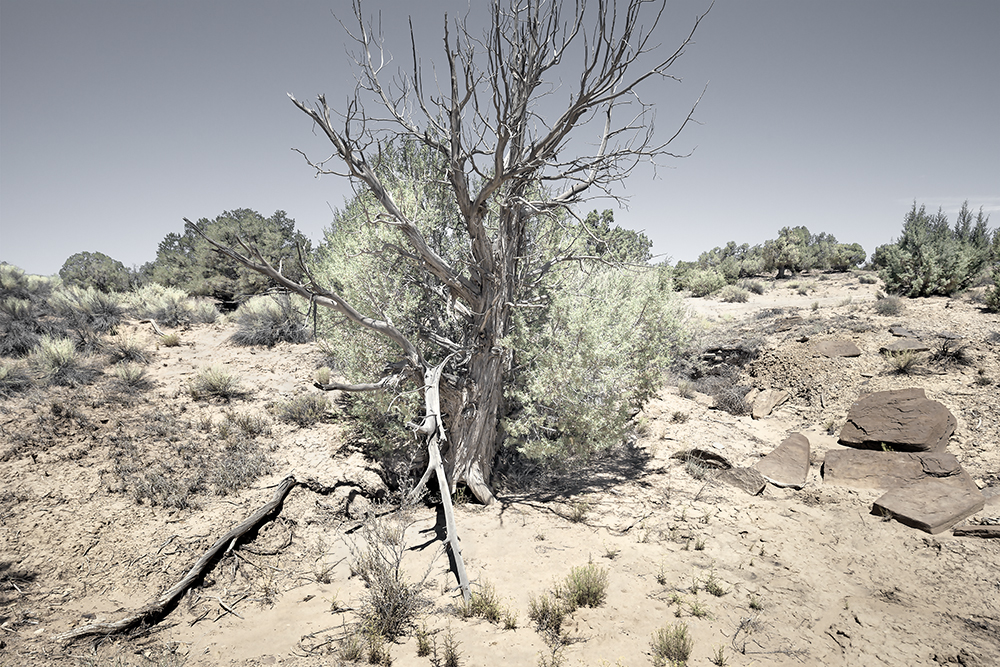 ©Bremner Benedict, Colorado Plateau –Black Mesa, Big Uncle’s Spring, AZ. Big Uncle shared the water from his ancestral spring with his neighbors until it dried up. Since the 1960’s Peabody Energy Coal Company’s intensive strip mining, consumed high levels of water from the Navajo aquifer to transport coal with a slurry pipeline depleting fifty springs in the area. The water table was greatly lowered. The mine closed late 2019. 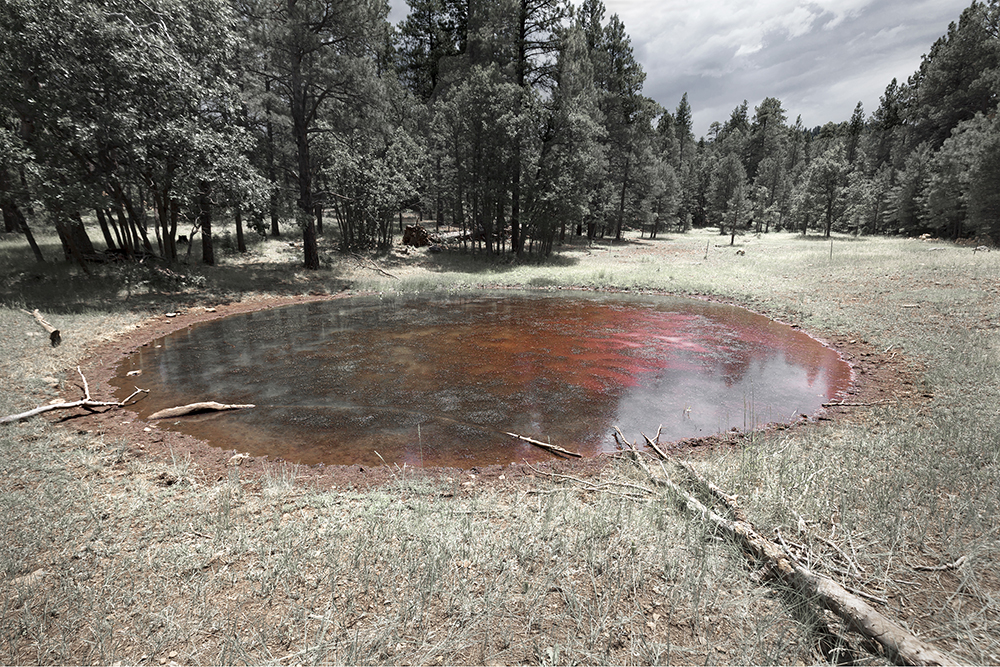 ©Bremner Benedict, Colorado Plateau – Coconino Forest, Weimer Springs, AZ. Serving as a watering hole for free-range cattle and wildlife an accidental spill of forest-fire retardant turned the spring this red color. The toxicity of these chemicals will take several years to dissipate. 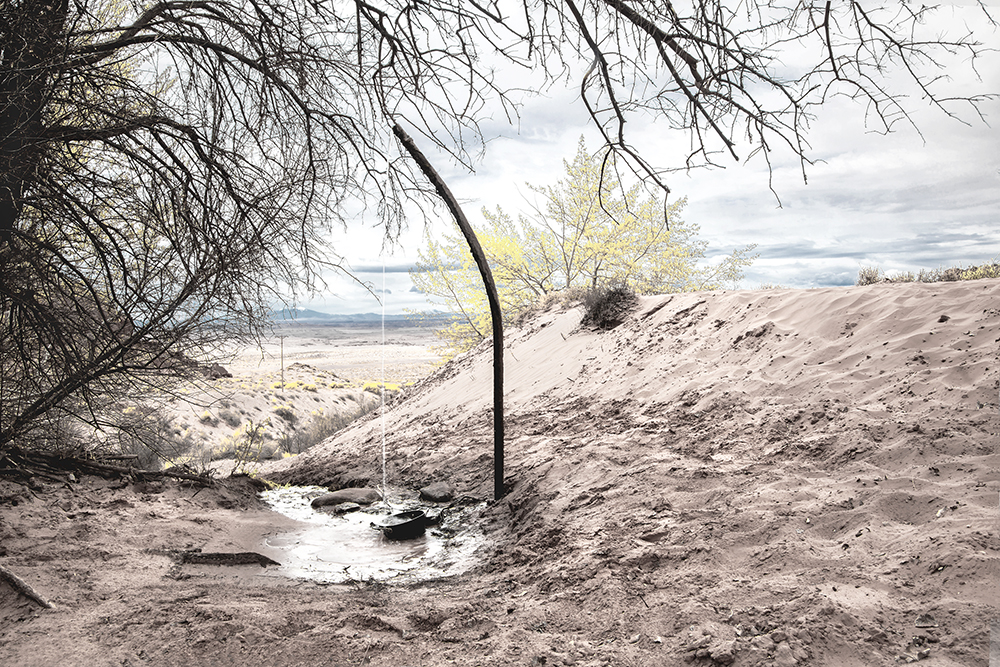 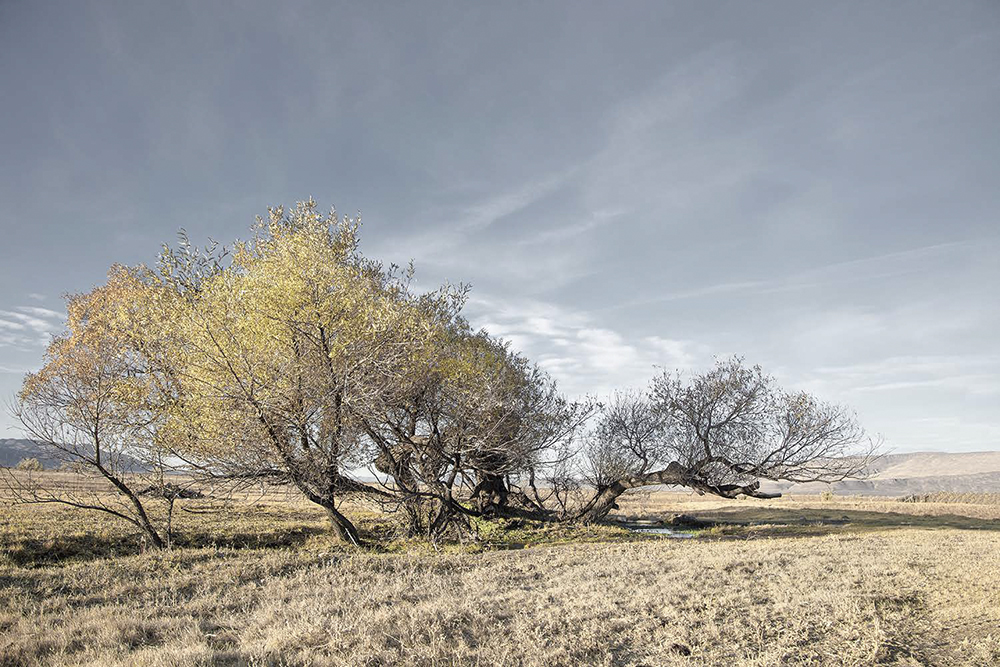 ©Bremner Benedict, Smoke Creek Desert – Artesian spring, Deep Hole Ranch, NV. Only a day’s walk from Wall Springs on the Nobles Trail, a trading post arose here in 1856 for westward immigrants and local Shoshone and Paiute. Lack of water made agriculture problematic in this very dry desert. Attempts to farm creased as the aquifers were depleting due to withdrawals of water exceeding replenishment. Today, the land supports an only couple hundred cattle through late summer and Fall. 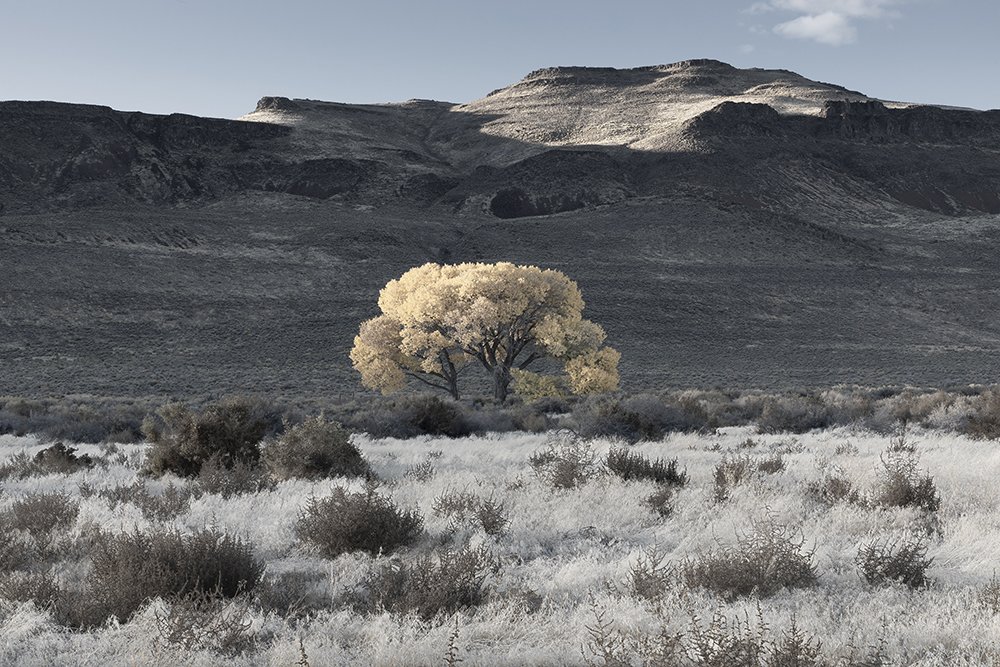 ©Bremner Benedict, Smoke Creek Desert – Wall Springs, NV. Thousands of white settlers crossing the country on the 1850’s Nobles Emigrant Trail rested at this campsite and watering hole. They followed an ancient path indigenous people created going from known spring to spring. In the 1970’s private landowners piped the spring waters to their ranches, emptying the pool under the tree. 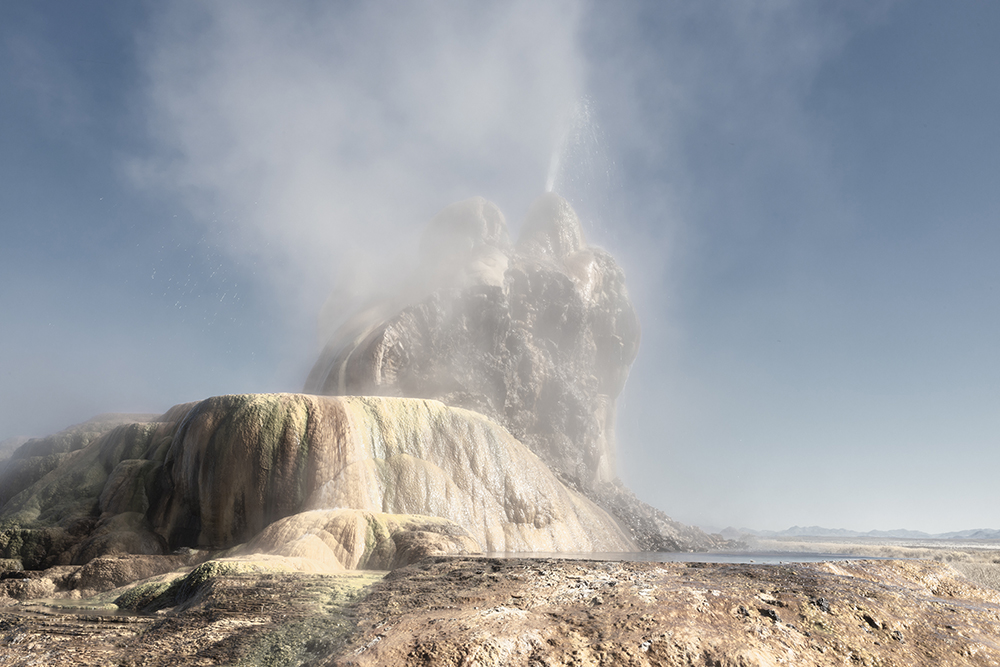 ©Bremner Benedict, Black Rock Desert – Fly Geyser, NV. Northern Paiute called this area Boiling Springs. Roughly 100 years ago farmers drilled an irrigation well for irrigation but the water too hot to use. In 1964, a geothermal company drilled a second hole. Finding the water was too cool for energy uses they tried and failed to seal it, creating an artesian cone-type geyser. Blue-green algae that live in high temperature color the travertine limestone vibrant hues of red and green. 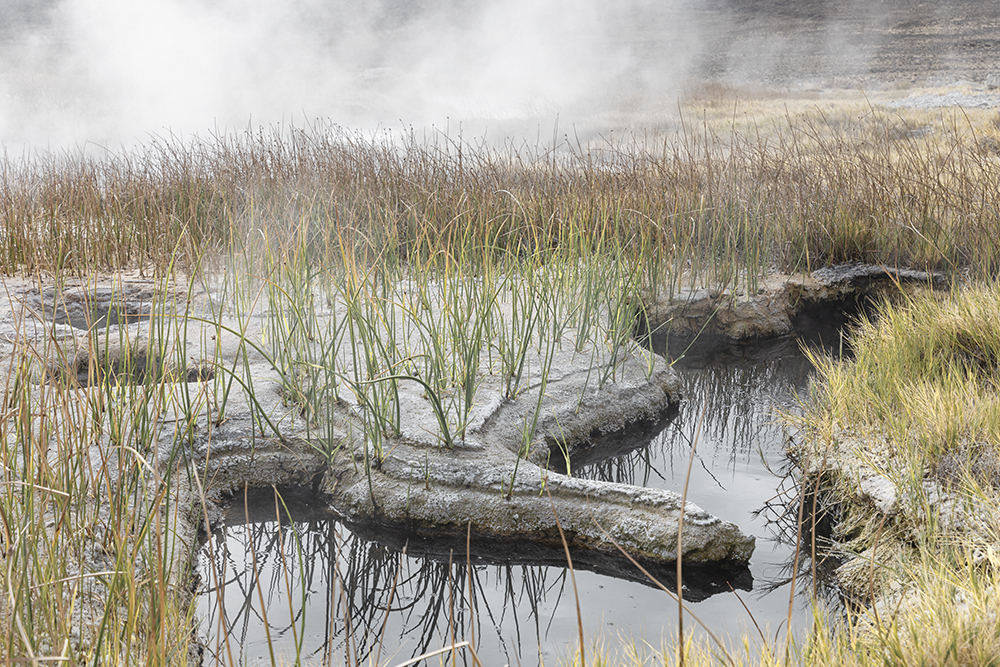 ©Bremner Benedict, Great Basin Desert – Pinto East Hot Springs, NV. Made of warm subterranean water, moving through rocks that are so porous and fractured they act like pipes, the emerging water becomes a hot spring. On-going research of hypersaline environments with the presence of microbial life and secretion of antimicrobial compounds by microorganisms is being studied for novel compounds and potentially new strains of anti-biotic medicines. 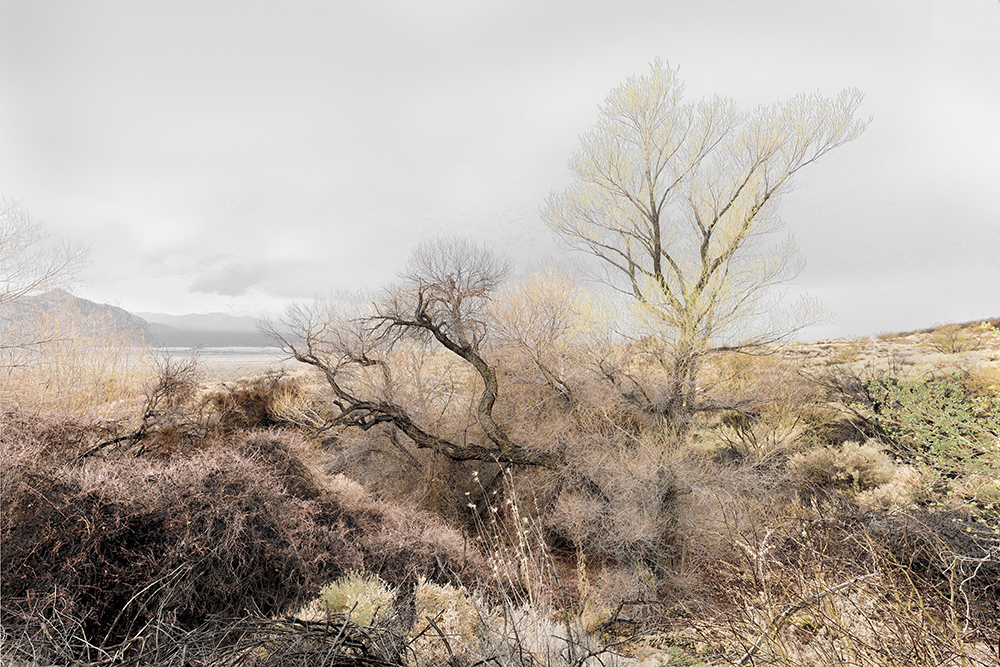 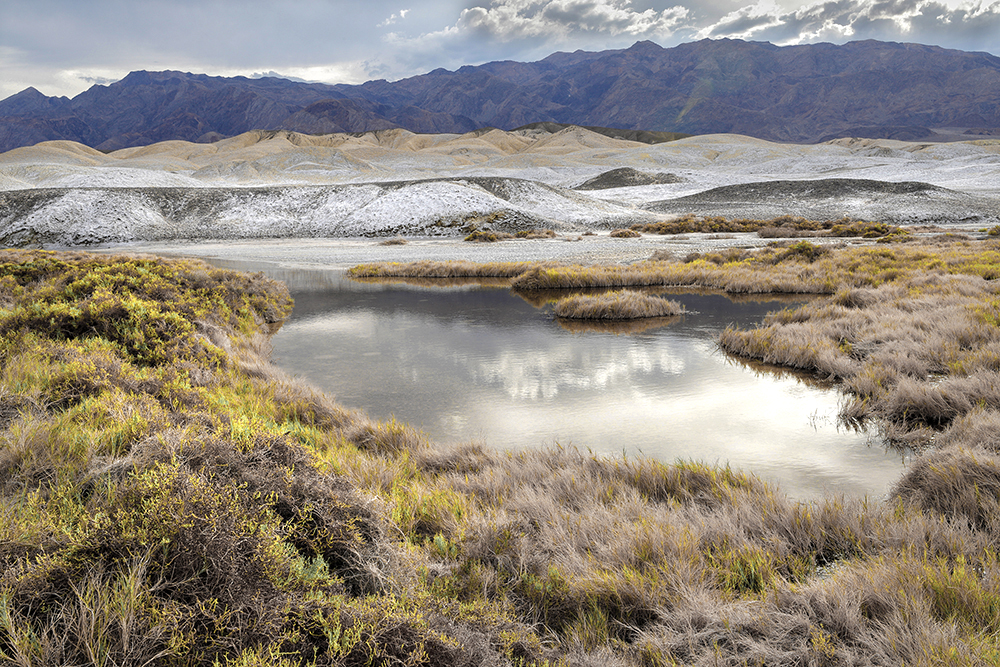 ©Bremner Benedict, Mojave Desert – Salt Creek Springs, Death Valley National Park, CA. An evolution island, this intermittent spring fed creek is a salt-water adapted ecosystem, with its own endemic desert Pupfish. The Salt Creek Pupfish developed the ability to live in water that’s 2.5 times more saline than seawater. The depletion and degradation in California springs has been so widespread, (up to 91% in places), that its wetlands are considered to be an endangered ecosystem. 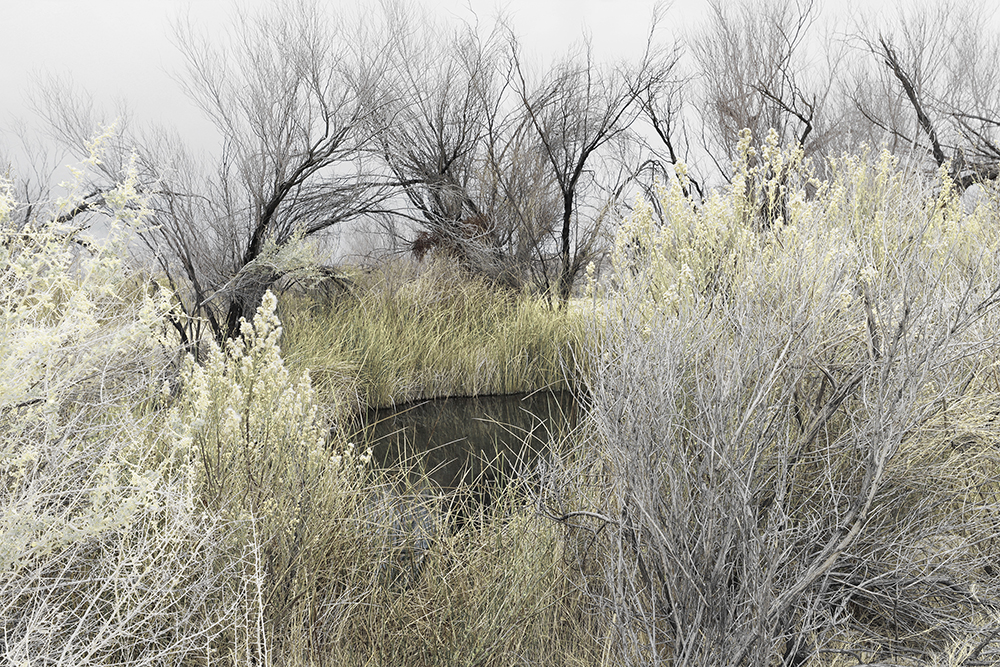 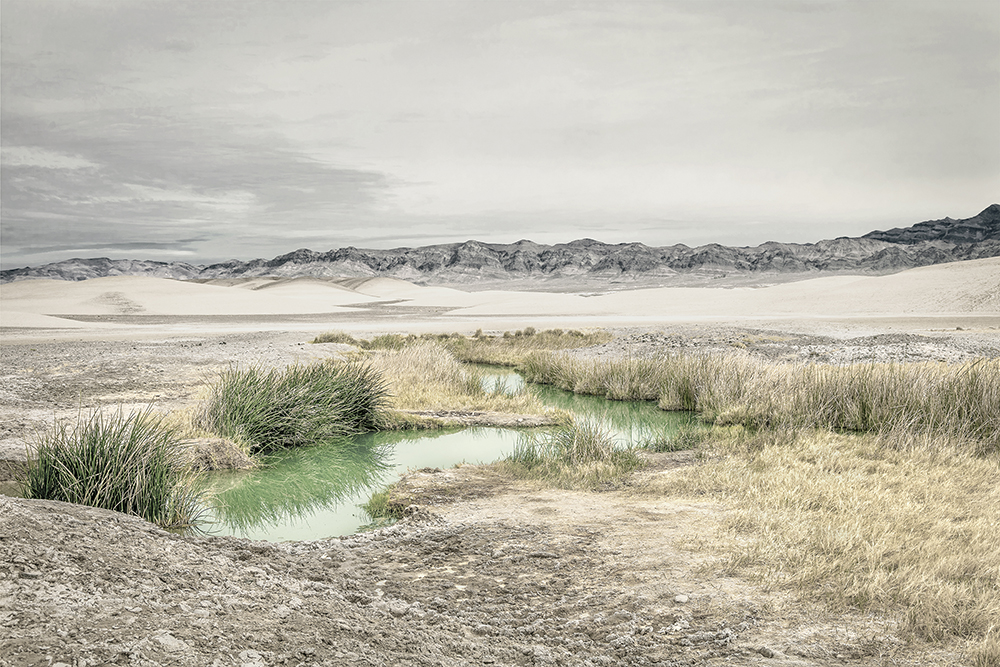 NEXT | Gloria Baker Feinstein and Abbie Brandao: The Next Generation >
< The 2020 Self-Quarantining Exhibition | PREV