Soomin Ham: Portraits, Windows, Once upon a time by Daniel GeorgeJuly 2, 2020 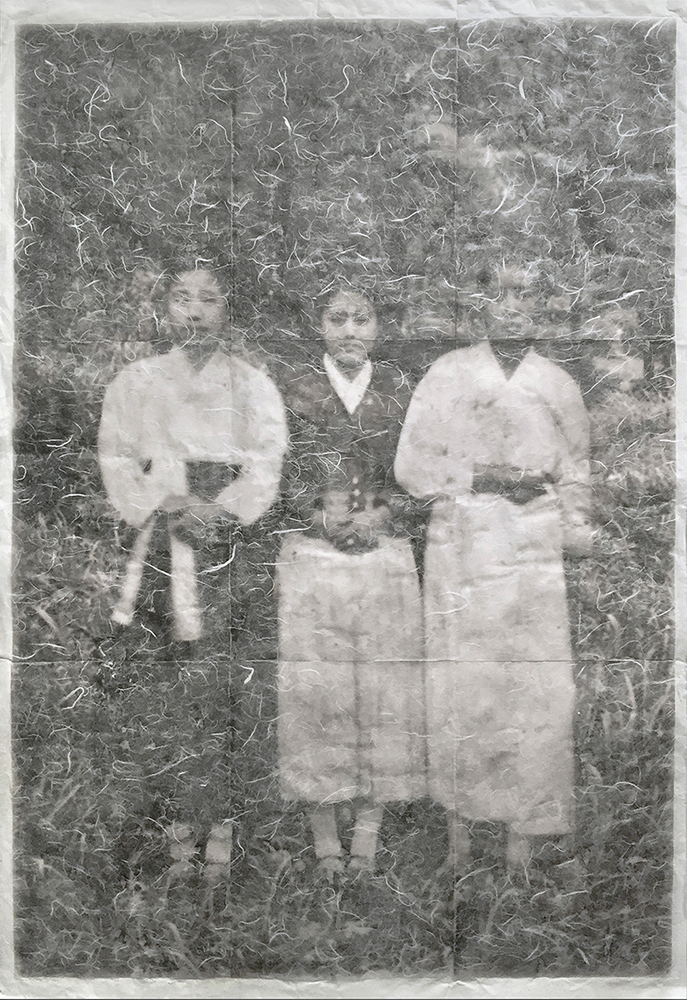 Projects featured this week were selected from our most recent call-for-submissions. I was able to interview each of these individuals to gain further insight into the bodies of work they shared. Today, we are looking at Portraits, Windows, and Once upon a time by Soomin Ham.

Soomin Ham is a photographer and multimedia artist based in Washington D.C. area. Ham received a Bachelor of Music in Orchestral Instrument from Ewha Women’s University in Seoul, Korea and her Master of Art in Photography and Multimedia from New York University/International Center of Photography in New York City.

Her work including photography, mixed media, and multimedia installations have been exhibited throughout the DC area, New York, and Seoul, Korea. Ham is the recipient of D.C. Commission on the Arts and Humanities Grants including an Individual Artists Fellowship Grant in 2003 and Small Projects Grant in 2001 and has received Visual Arts Fellowship 2019-20 from the Virginia Museum of Fine Arts. She is a winner of the LensCulture Portrait Awards 2019. 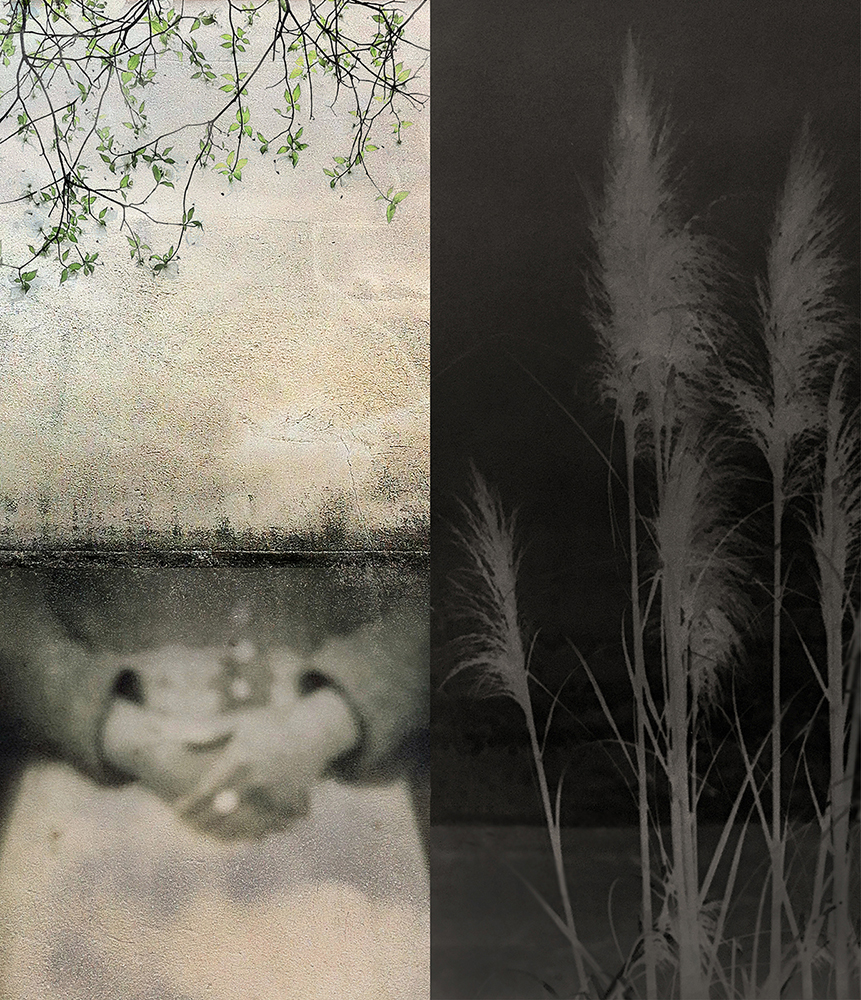 ©Soomin Ham, Windows, Song of Scent in the Wind

Portraits, Windows, Once upon a time

I was astonished by the tiny black and white photographs that my grandfather had made in the 1930s in Korea.  He was not a professional photographer but he had an artist’s sensibility, and this would have been lost to me if not for the box of photos I found after he was gone.

The photos sat before me, faded and worn, but the images were alive with a fragile beauty of expression and gesture.  Except for a few photos of my grandmother, the portraits were of people I didn’t recognize. But the candid images were haunting and I started to wonder. In my imagination, I began to create small visual poems, woven fabric of memory and dreams. It was then that I decided to give life again to these lost images.

After exploring and gaining a deeper understanding of these photographs, I began to alter the images to create the “Portraits” series. These new images are reconstructed as composites where the past and present coexist and resonate.

The “Windows” series continues this exploration by merging my grandfather’s vision and my own. The original faded photographs are recontextualized with fragments from the “Portraits” series suggesting a new narrative transcending the people, place and time originally portrayed.

While exploring the old photographs, I discovered that Gyeongbok Palace, one of the royal palaces in Korea, was the only place where my grandfather and I took pictures in the different time periods. This discovery allowed me to reinterpret the meaning of these once hidden images in creating “Once upon a time”.   “Once upon a time” series are a collage with multilevel pictures of a palace that I captured in Korea, grounded by my grandfather’s photos.

Photography is a window to place, time and memory.  In the “Portraits and Windows”, photography enabled me to connect to my grandfather, to understand his creative vision, and to collaborate with him in creating this new body of work. 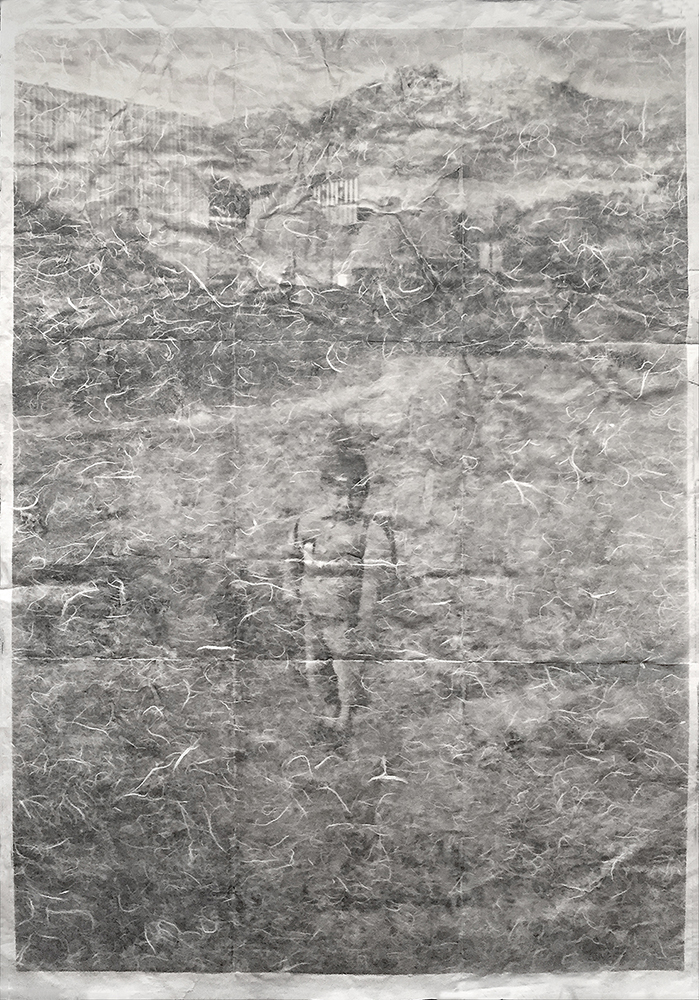 Daniel George: You had been in possession of your grandfather’s photographs for some time prior to initiating these works. What persuaded you to commence expounding on his pictures?

Soomin Ham: I was intrigued by the tiny black and white photographs he had taken in the late 1930s in Korea. They were faded and worn, but the images were alive with a fragile beauty of expression and gesture.  I didn’t know many of these people except for the few photos of my grandmother, but the images were haunting and made me wonder.  I wanted to give these old images new life by merging my grandfather’s images and my own to create small visual poems. 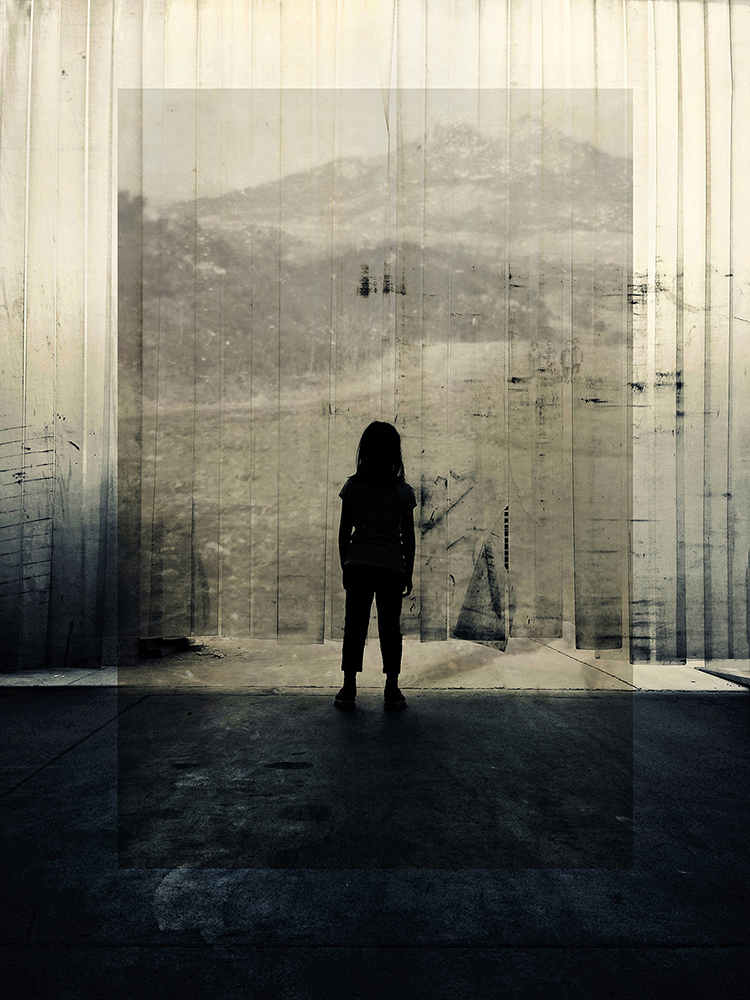 DG:In your artist statement, you describe an evolution from “Portraits” to “Windows” to “Once Upon a Time”—all of which rely on reconstruction, recontextualization, and reinterpretation. Would you mind sharing a little bit more about the significance of your process?

SH: The initial images for the project were constructed as composites where the past and present coexist and resonate.   I began by altering the old pictures, blending these with my own images to create the “Portraits” series.  This was then expanded to the “Windows” series as I gained greater insight into my grandfather’s intention and merged this with my own understanding and vision.  Images from the “Windows” series were paired with pieces from the “Portraits” series creating a new narrative that transcended the people, place, and time originally portrayed.

In the series, “Once Upon a Time,” this narrative was broadened and deepened over space and time enabled by an amazing discovery of synchronicity.  I was astonished to learn that Gyeongbokgung, one of the great royal palaces in Korea, was the only location where both my grandfather and I had photographed – a connection across time.  The “Once Upon a Time” series is a panoramic collage of the pictures of Gyeongbokgung that I took, layered with my grandfather’s original photos.  It is a reinterpretation of the meaning of my grandfather’s once-hidden photographs. 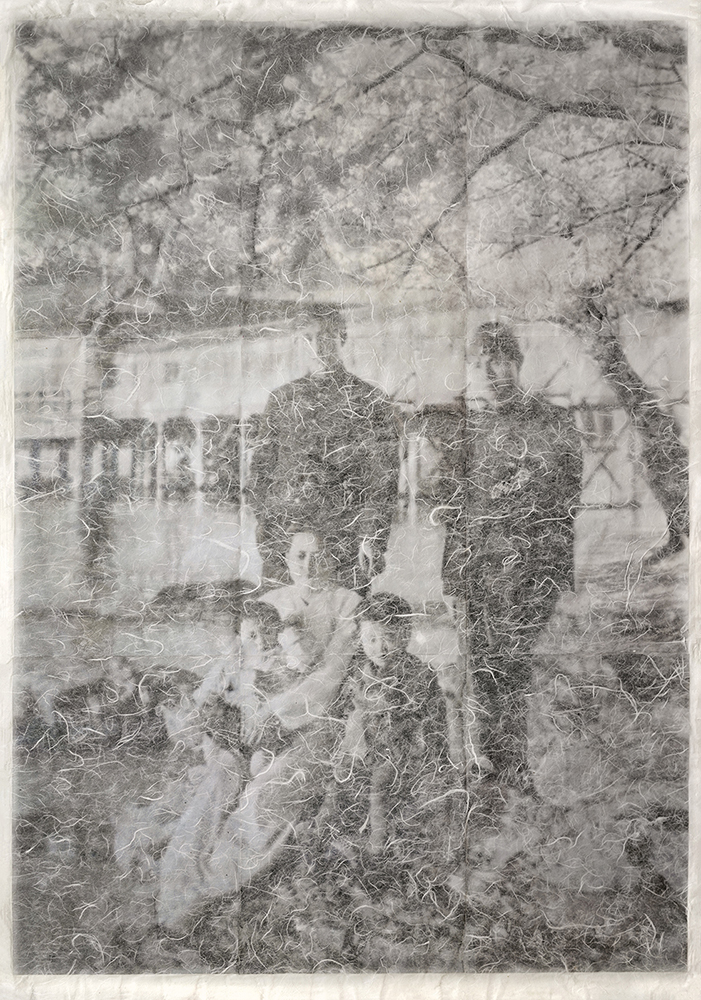 DG: Tell me more about final exhibited pieces. It seems like materiality is something very important to you, and in the presentation of these images.

SH: I used Hanji, Korean mulberry paper, to create my prints.  Hanji gives the image a wonderful tactile quality.  The paper is rich in texture and depth and responds beautifully to the pigment ink.  Final images of the “Portraits” series were printed on Hanji in nine separate prints and then glued together on a Hanji substrate.

My use of Hanji for this project is a connection to my Korea heritage.   Hanji paper has a strong vitality and has been used in Korea for many centuries – not just for writing and painting but also for interior walls, doors, windows, and everyday objects.  The portraits from the old photos, the fragments of everyday life in Korea, all came alive again when printed on this traditional paper. 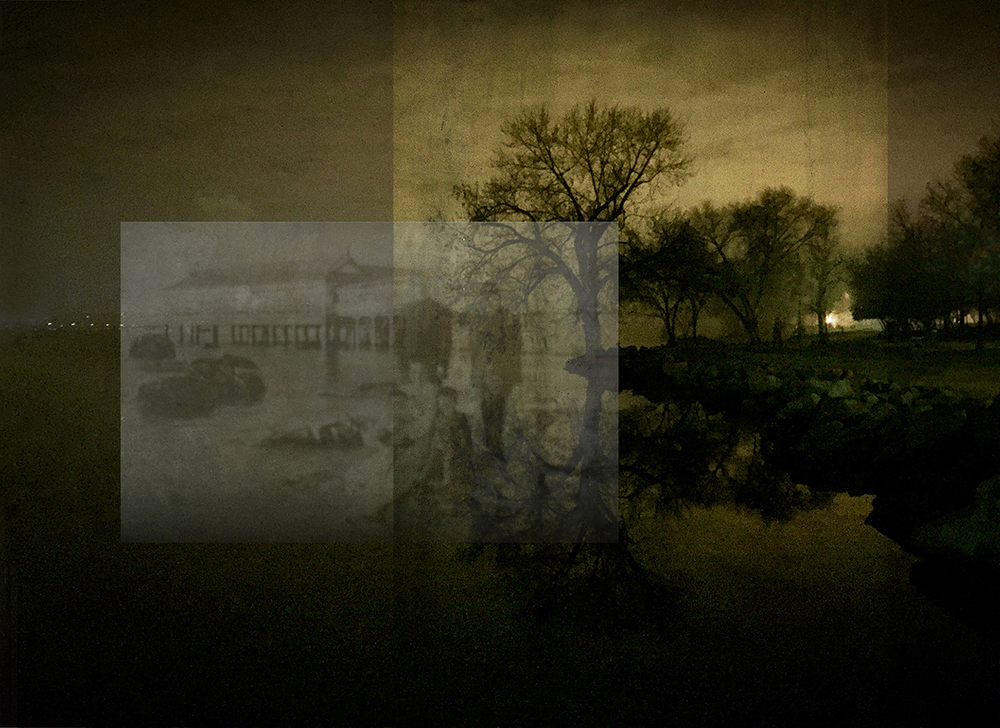 DG: I am curious about your background in music and how it may have influenced these projects. I feel like there is a melodic quality to your “visual poems,” as you describe them. Do you see any sort of connection here?

SH: My background in classical music and Eastern culture has greatly influenced my creative life. I believe that photography and writing music have common compositional elements and techniques.  The relationship between music and photography has expanded my artistic vision and sustained the development of visual narratives.

I liken the process of making the three series to creating a musical composition, a visual tone poem.  A melody and rhythm flow within and across the series, conveying emotion and intent as structure of the photographic narrative.  It has been my hope to create a balance and simplicity in these series, to make my work visual as well as “audible.” 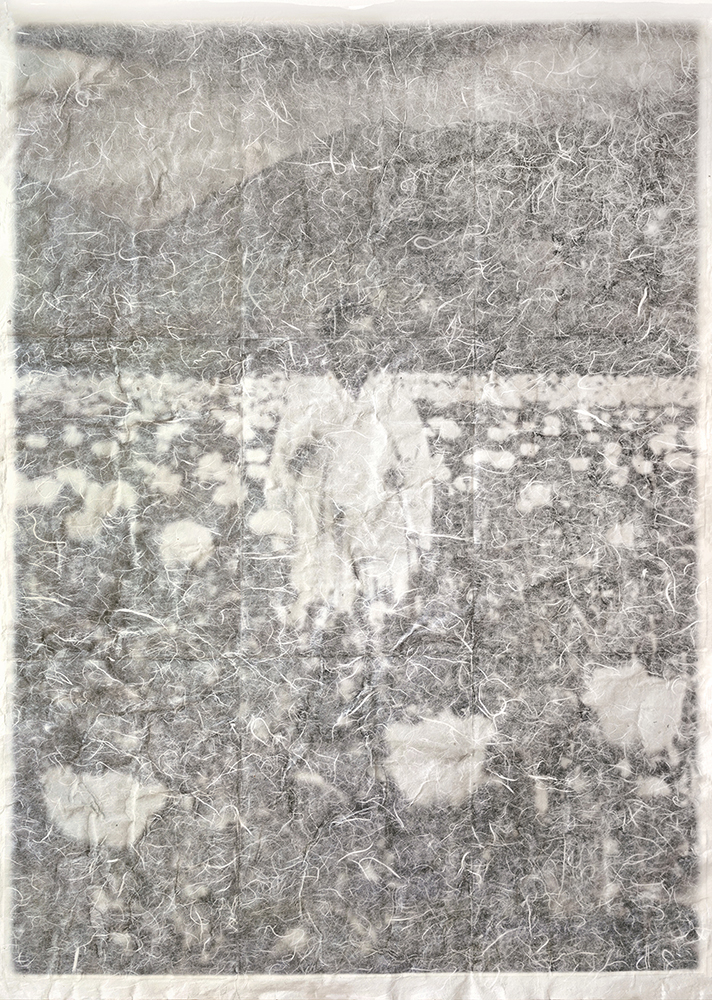 DG: After having completed these works, essentially in collaboration with your grandfather, what are some new conclusions or insights into the coexistence of past and present?

SH: The process of working within the family photographic archives was a very moving and emotional experience.  If I hadn’t found the box of photos after my grandfather passed, this family treasure along with my grandfather’s artistic sensibility would have been lost forever.  In “Portraits and Windows” photography is a window into place, time, and memory,  and it enabled me to connect to my grandfather, to understand his creative vision, and to collaborate with him to create a new body of work. 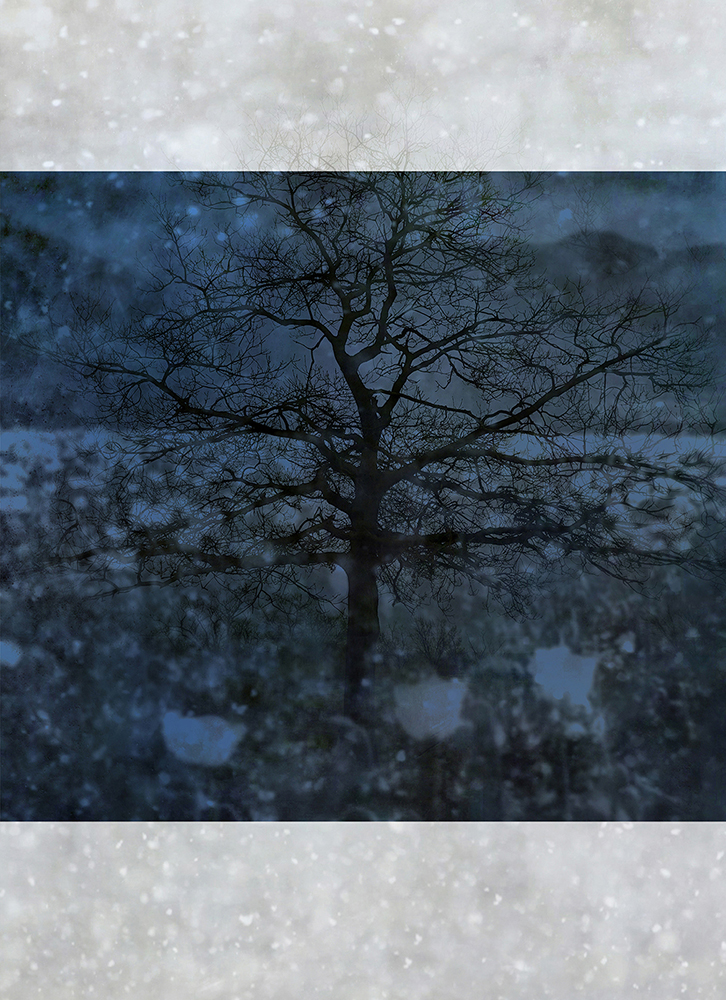 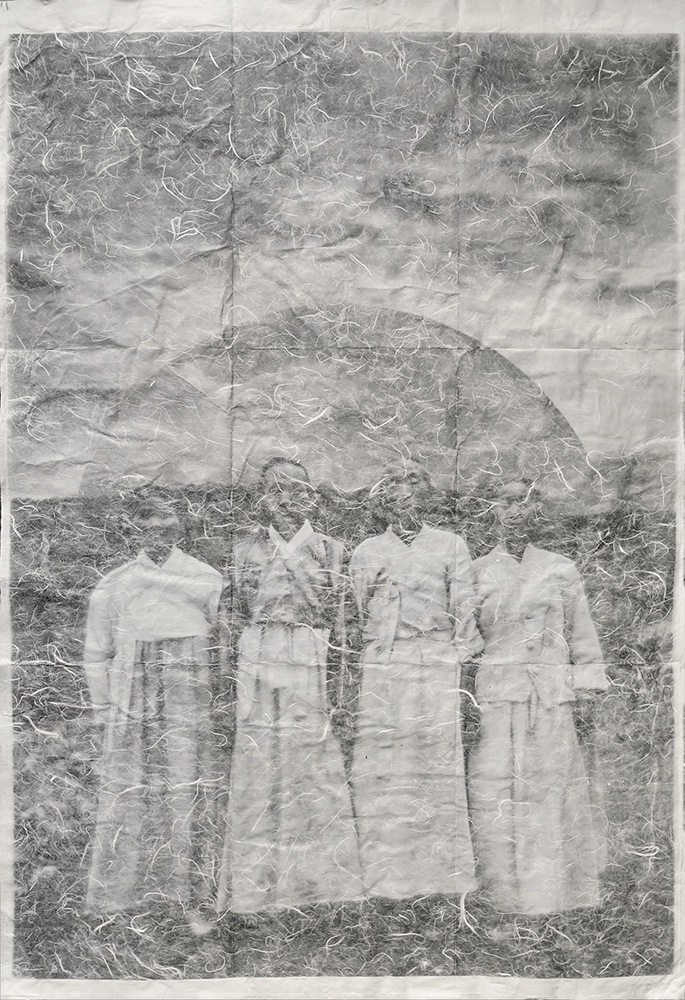 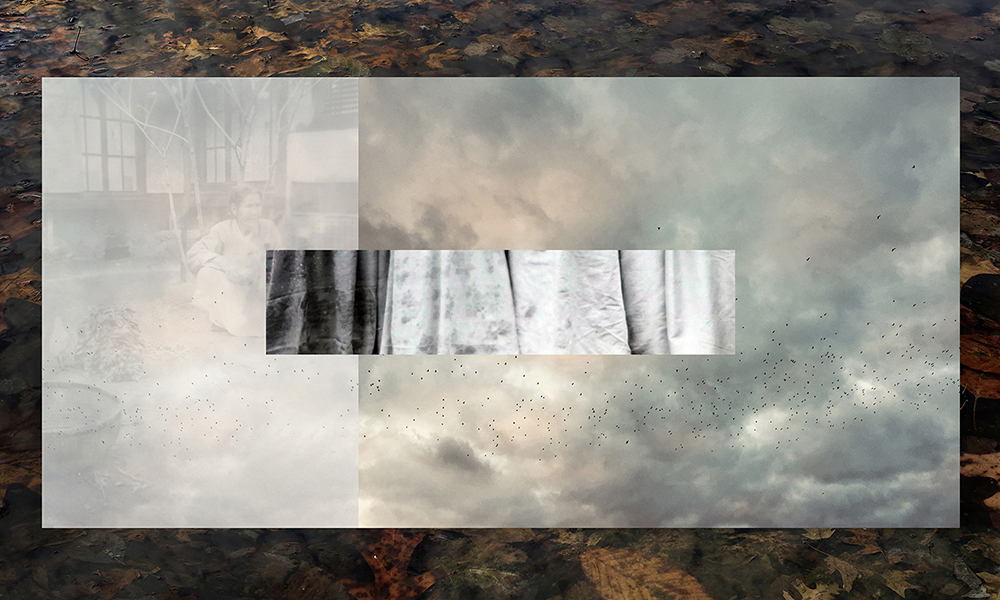 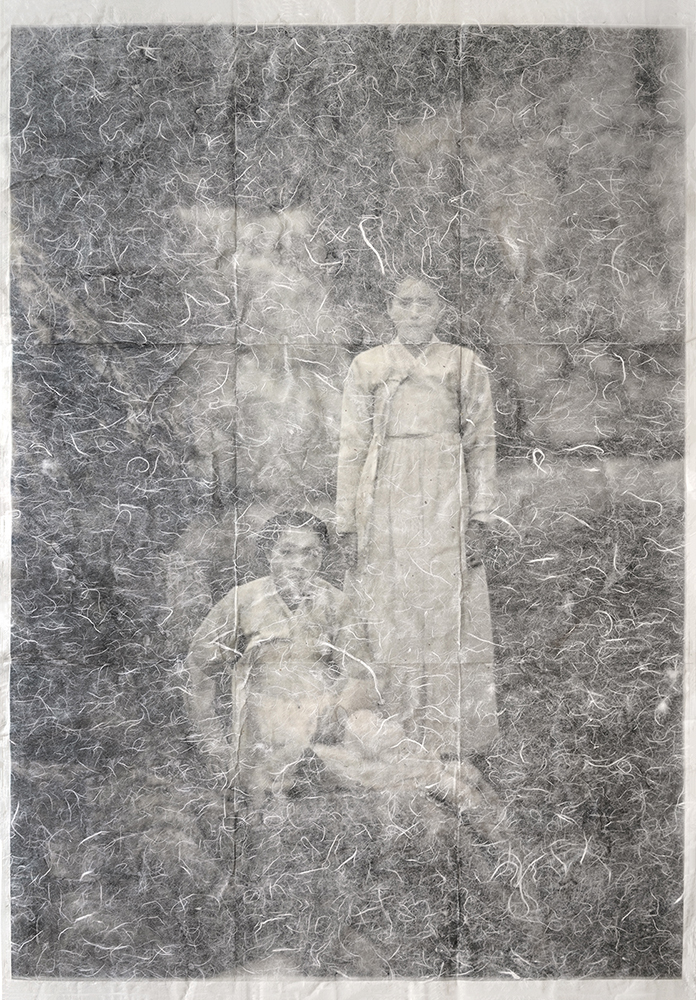 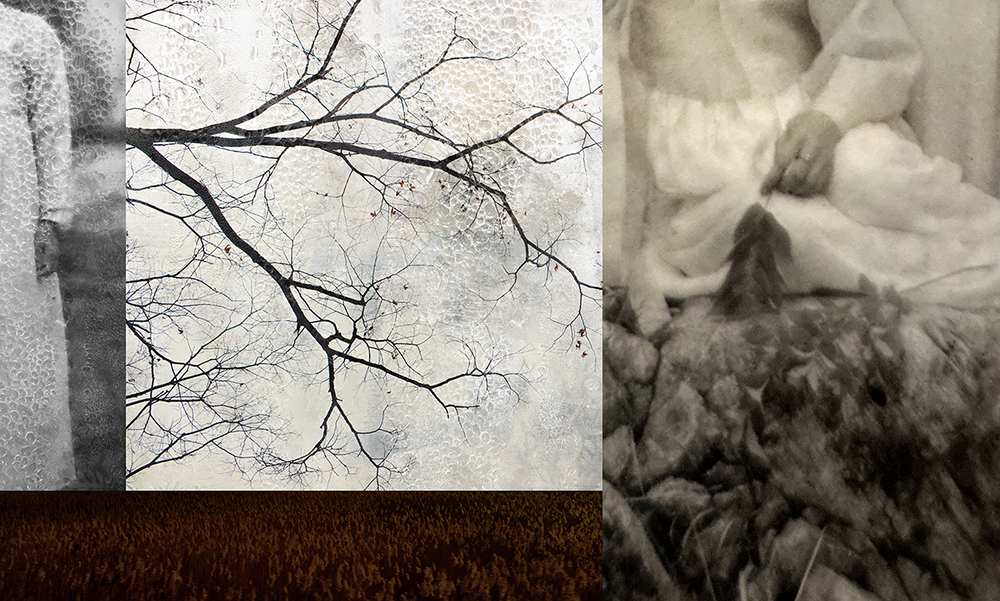 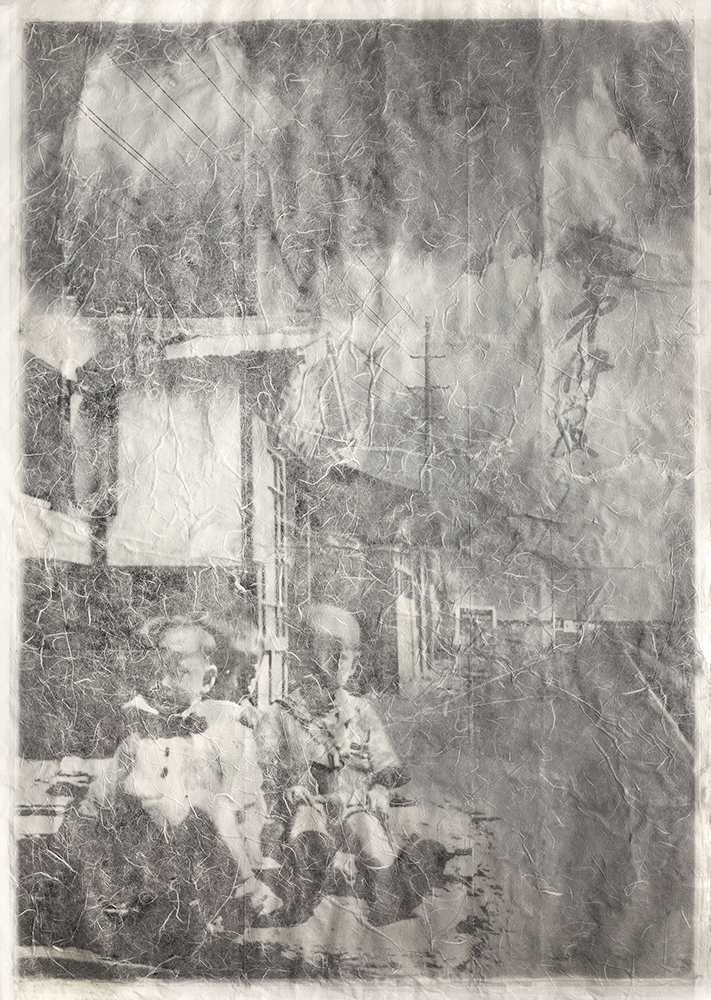 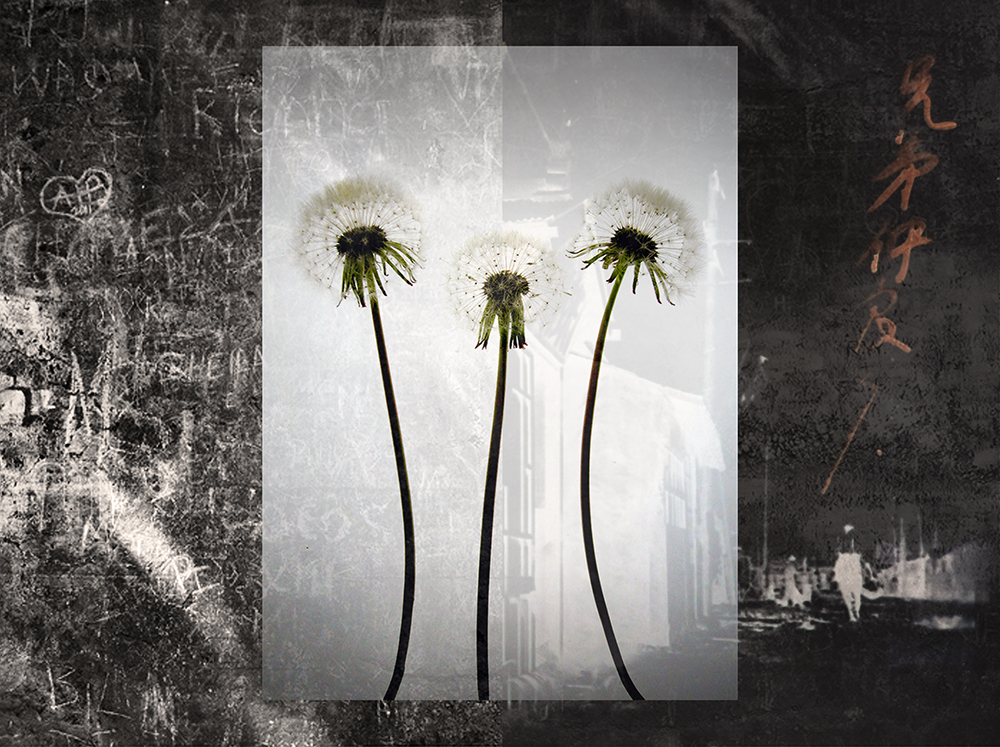 ©Soomin Ham, Once Upon a Time I

©Soomin Ham, Once Upon a Time II 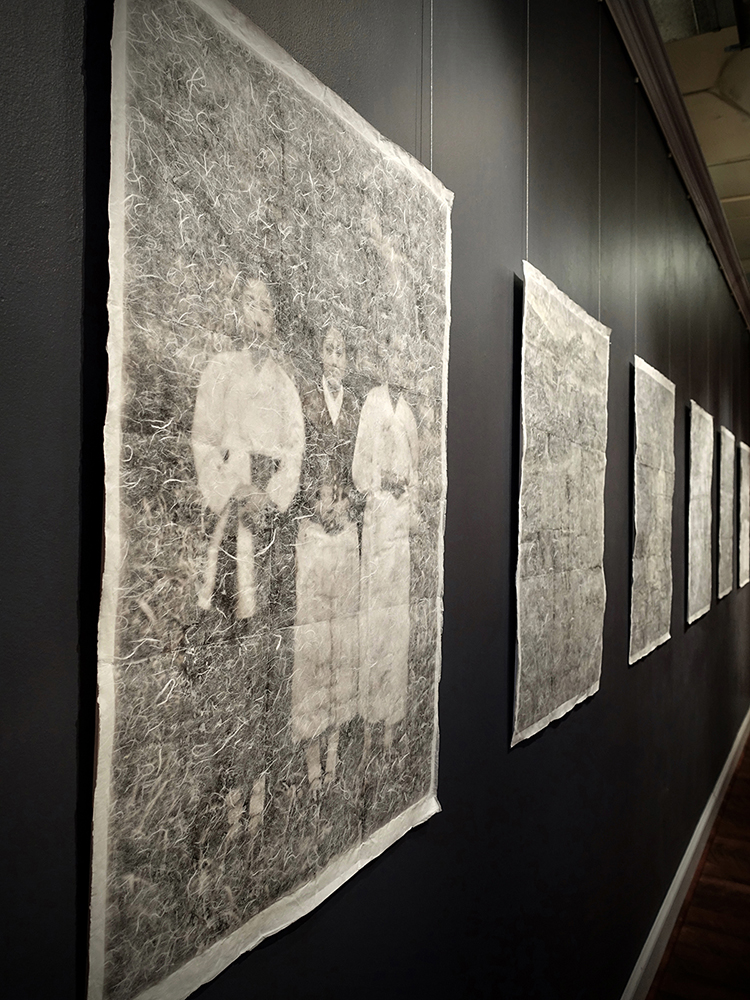 Tags: Once Upon a Time, Portraits, Soomin Ham, Windows