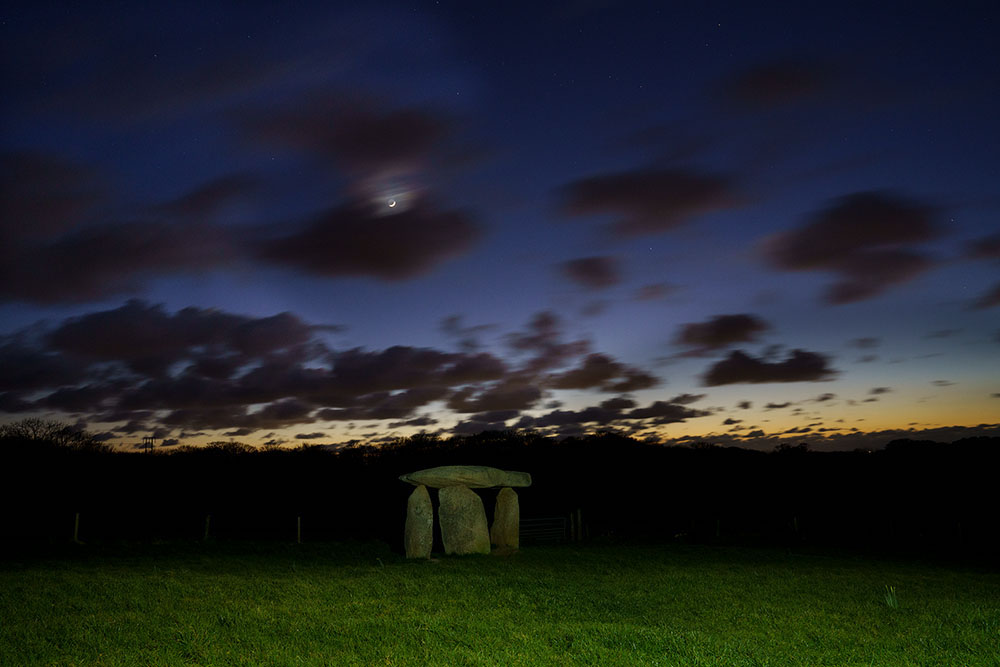 As a photographer who walks my city’s streets at twilight, I’m often alone.  That is why it gives me special pleasure to appear in and present a group of my fellow night photographers under the rubric,  “Making Darkness Visible.”  The five of us represent a variety of approaches that suggest the rich possibilities of night photography.  As you will see, we work in color or black and white, and in different environments, including cities and rural or suburban areas.  Wouter Vanhees and I each wander through our chosen cities, often on deserted streets, chronicling the transitions and juxtapositions of the urban landscape.  Daniel Anizon seeks to recapture forgotten unconscious images by photographing the periphery of his vision as he walks at night through the countryside.  Jill Waterman documents the social rituals of New Year’s Eve in different countries, celebrations that fill the darkness with artificial light. MJ Sharp takes as a theme, what most of us implicitly believe, that the darkness of night is a precious and endangered resource.  Her nighttime photographs of ancient stone monuments in Cornwall, UK, are lit by moon and stars. And finally, all of us hone our night vision and, in Jill Waterman’s words, rely on our “camera’s ability to record things that are beyond the capabilities of human [sight]” to make the darkness visible.

MJ Sharp is a documentary and fine arts photographer originally from East Tennessee. She is a longtime resident of North Carolina, where she was the staff photographer of the groundbreaking Independent newsweekly for most of the 1990’s. Her past journalistic work has also included freelancing regionally for the New York Times, the New York Times Magazine, PBS’s Frontline, the Columbia Journalism Review, and the Ford Foundation, among others. She teaches analog photography and advanced projects at Duke University, but for the 2021/2022 academic year, she was on a Fulbright Scholar Award in the UK.  Her work appears in the collections of the North Carolina Museum of Art, the Akron Museum of Art, the Nasher Museum of Art, the Ackland Museum of Art, and the Asheville Museum of Art, as well as private collections such as the the Keohane-Kenan Permanent Collection at Duke and the Cassilhaus Collection in Chapel Hill, NC. She has served as Vice President of the Duke Faculty Union and also on the Faculty Advisory Committee of the Nasher Museum of Art at Duke. 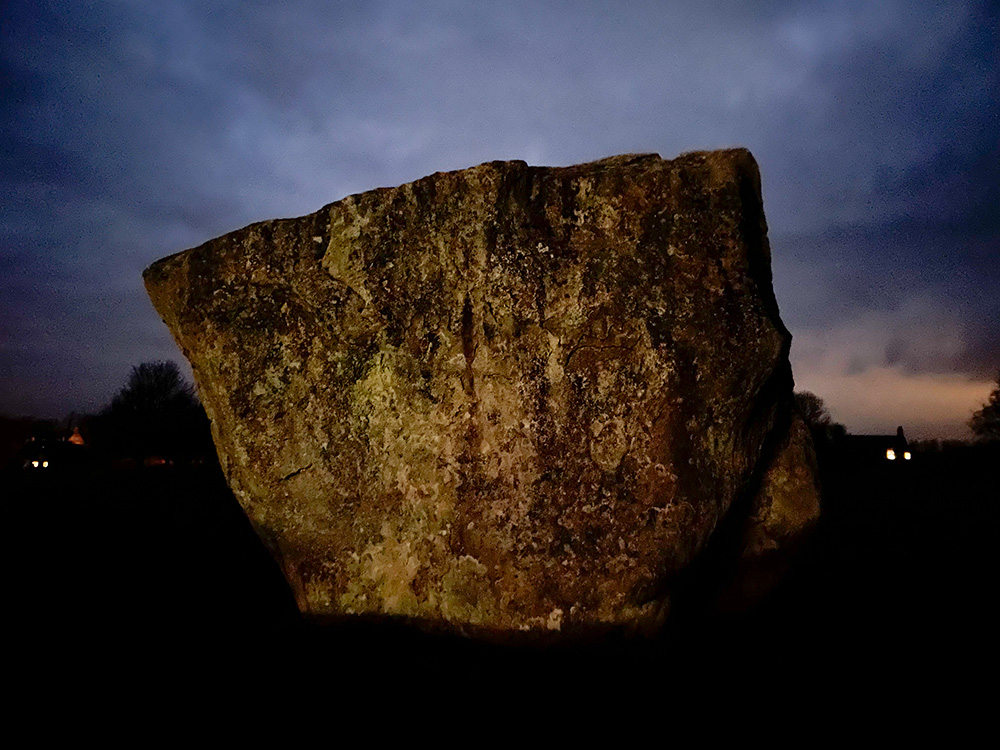 A vanishingly small percentage of our evolutionary time as human beings has been spent in artificial light. For a large percentage of the world’s population, the experience of night is quickly becoming a boutique and privileged one. When we are robbed of night—from seeing the night sky that fueled the world’s mythologies to experiencing our own adaptation of heightened senses in the dark— what are we missing?

Archeological evidence of reflective stones from some prehistoric megaliths in Cornwall suggests that people were visiting these sites in liminal light or at night. Could an artistic recreation of that experience help us better understand what we’re missing when we live our lives awash in light pollution—light pollution that isn’t even limited to earth at this point, but includes a truly staggering number of satellites already in orbit or slated to be in orbit in the unregulated space above earth.

Cornwall is remarkable both for its concentration of prehistoric sites and for its dark skies. Two of the seven designated Dark Sky Parks in the UK are in Cornwall. I’m at the University of Exeter, Penryn Campus, in Cornwall on a 2021/2022 Fulbright Scholar Award to explore our loss of darkness with Professor Kevin Gaston of the Environment and Sustainability Institute. The Environment and Sustainability Institute had the collaboration of artists and scientists in its very founding in the form of the Creative Exchange Programme, led by Professor Caitlin DeSilvey.

I’m now turning my attention from creating the night photographs I will use in the installation to collecting people’s stories of night or darkness. While there is compelling evidence that prehistoric people were visiting these sites in low light, we will never know what they were saying—those utterances are lost to history. But anytime I’ve ever asked anyone if they have an experience of night or darkness that has been memorable for them, they immediately begin telling me a story. Using the visuals of prehistory and the audio stories of present-day people, I hope to provide an enriched experience of darkness that connects past and present. 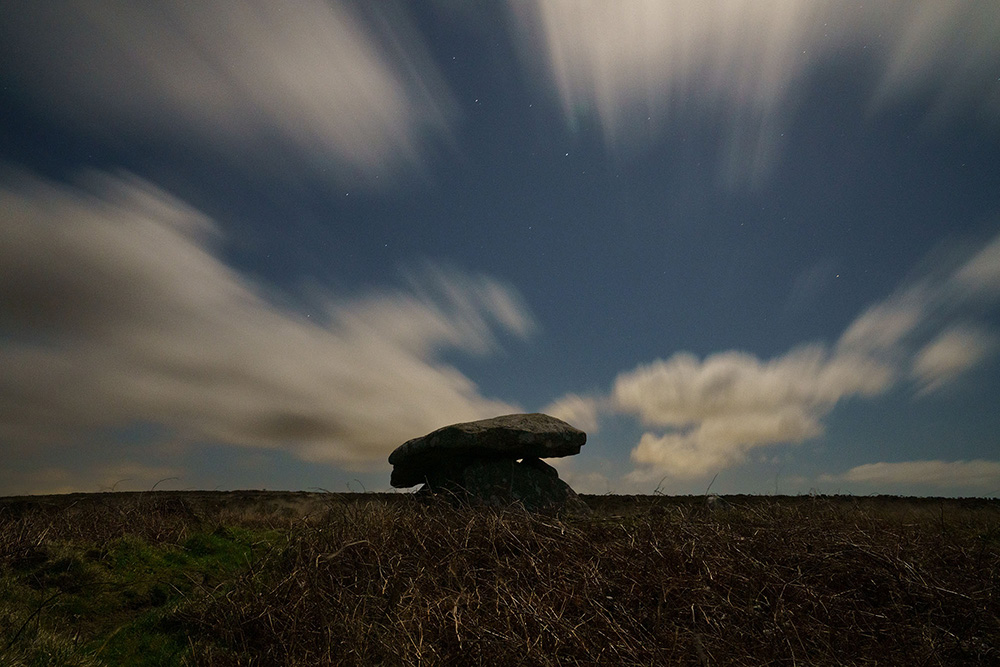 My first camera was a Kodak 110mm, with which I tried to capture the subtleties of different phases of the sunrises near my house. Unclear at the time why the prints all looked the same, I grew up to understand the very, very, very many ways that the Kodak Pocket Instamatic was the wrong tool for that job. My father, who cut his teeth on an Argus back in his day, bought me my first SLR as a young teenager. The next step was, of course, to become the high school yearbook editor, which sealed my fate from that point on. 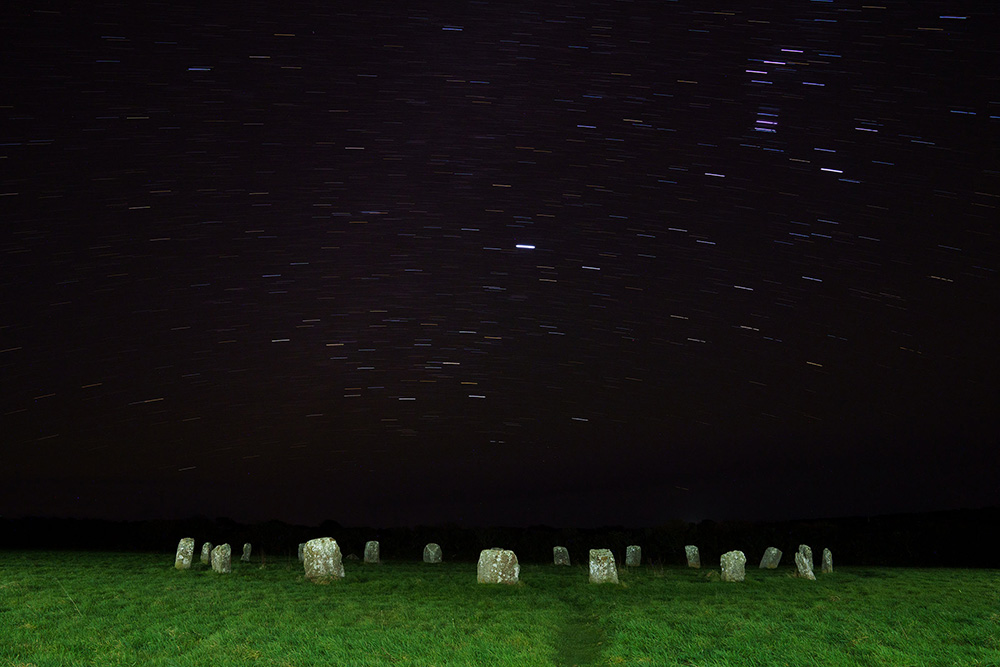 After a decade of a newspaper deadlines lifestyle, I had to leave quite suddenly to help a family member recover from a life-threatening injury. I soon found that the attentiveness required to help someone recover their health was very similar to the attentiveness required to make art, and after that experience I stopped making pictures for a few years. When I did go back, I just played around with expired Polaroid film so I wouldn’t feel any pressure to produce. One March I noticed that our spring daffodils, which were so sprightly and joyous in the daytime, looked unexpectedly ragged under the streetlights at night. It seemed as though the night landscape had different things to say than the daytime one. 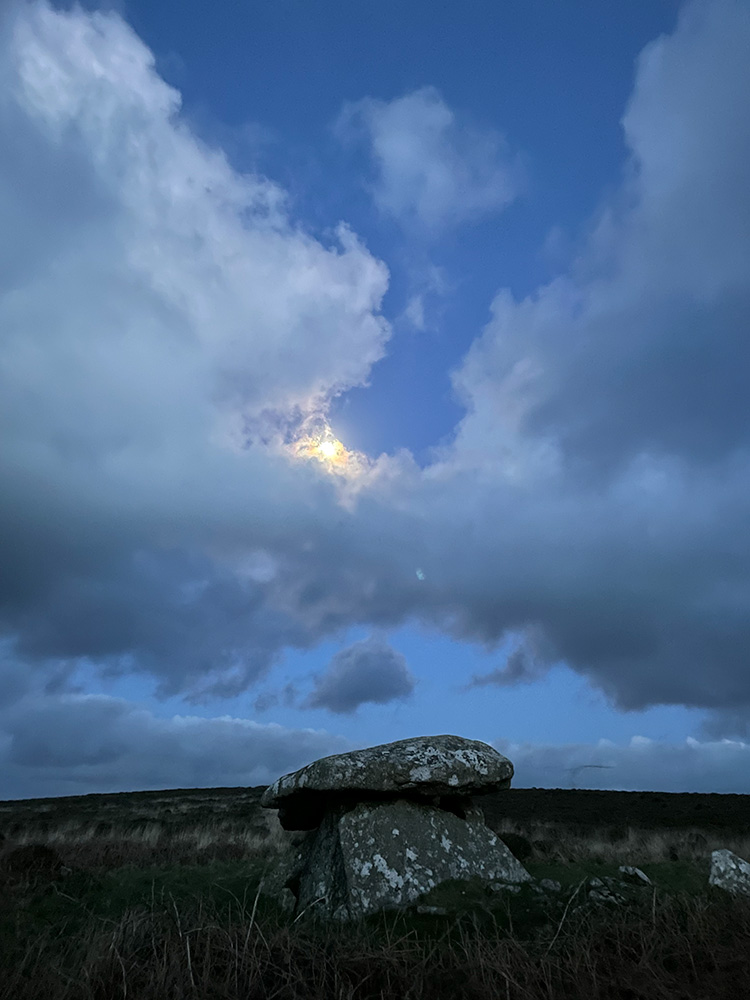 I love working at night because it is the polar opposite of how I’ve spent a lot of my working life. That is, most of the time I’ve had no choice but to get the shot. There is no such thing as saying to your assignment editor, “I just wasn’t feeling it” or “The conditions weren’t what I was expecting.”  You figure out how to make a compelling picture of that thing, and you deliver it. When I left that life behind, I found that I didn’t want to know what the picture was going to look like or even if I was going to successfully get a picture.  I went from making sure I had the shot to making sure I had no idea what the image might look like. I spent over a decade happily making film exposures based on nothing but my “spidey sense” of the lighting conditions, including photographing only by moonlight.  The weather of Cornwall has finally tipped me over from 4×5 and 8×10 film into digital shooting for my latest project, as there is no such thing as a reliable three-hour window of moonlight with which to expose an 8×10 negative. 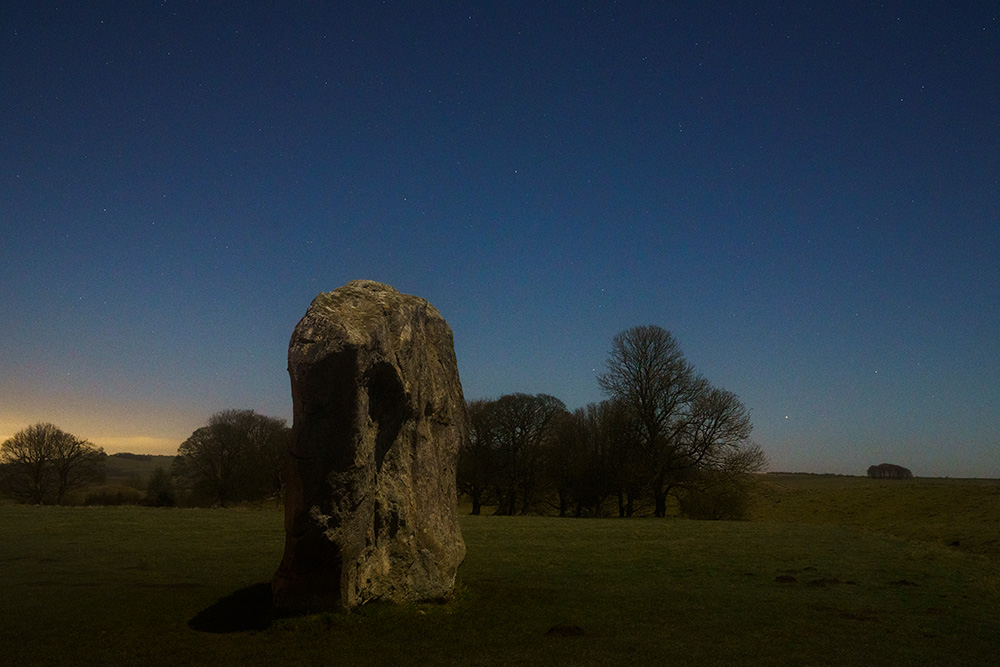 There are so many artists whose work I love. Sharon Harper, Chris McCaw, James Turrell, Ann Hamilton, Olafur Eliasson, Bill Viola, Bruce Nauman, and Anicka Yi, whose work I saw at the Tate Modern in London this past January.  Also in London at 180 The Strand, I have seen two remarkable shows. LUX was a group show this past winter, and I particularly loved Starry Beach by art collective a’strict and The Transfiguration by Universal Everything. At 180 The Strand’s current show, Future Shock, I spent 5 transformative hours taking in the immersive experiences. I was particularly taken with UVA artist collective’s Vanishing Point, and the work of Ryoichi Kurokawa. 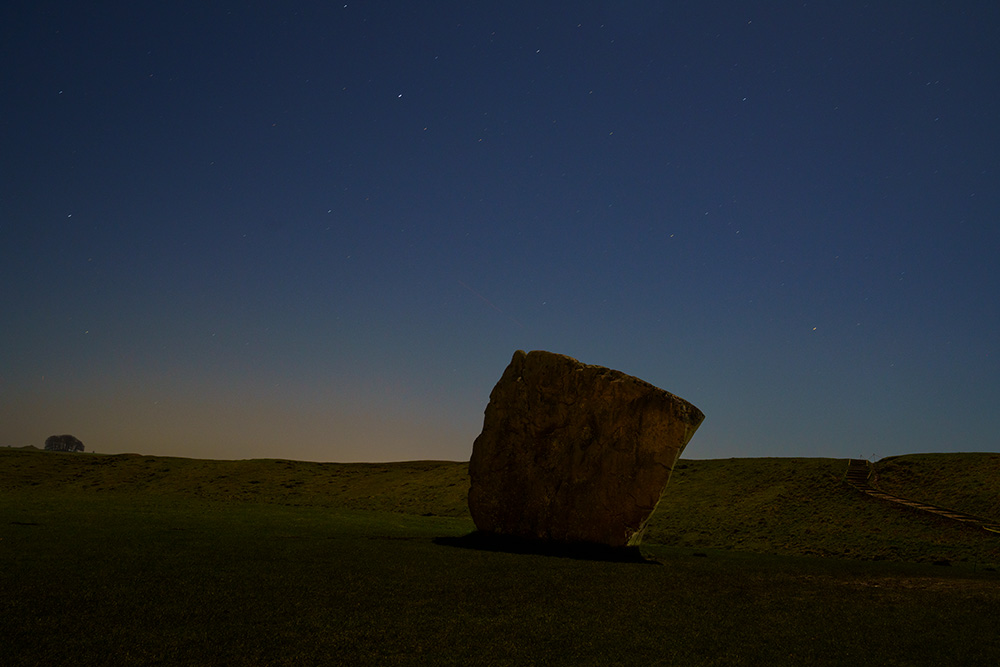 Interestingly for a straightforward still photographer, I have always been particularly moved by installation art when I’ve visited museums or galleries over the years. Being affected by installation art and making it are two entirely different animals, of course, but that’s the path I’m on now. I expect to be failing in multiple ways for many, many, many months, and I am getting ready to cheerfully embrace that journey. 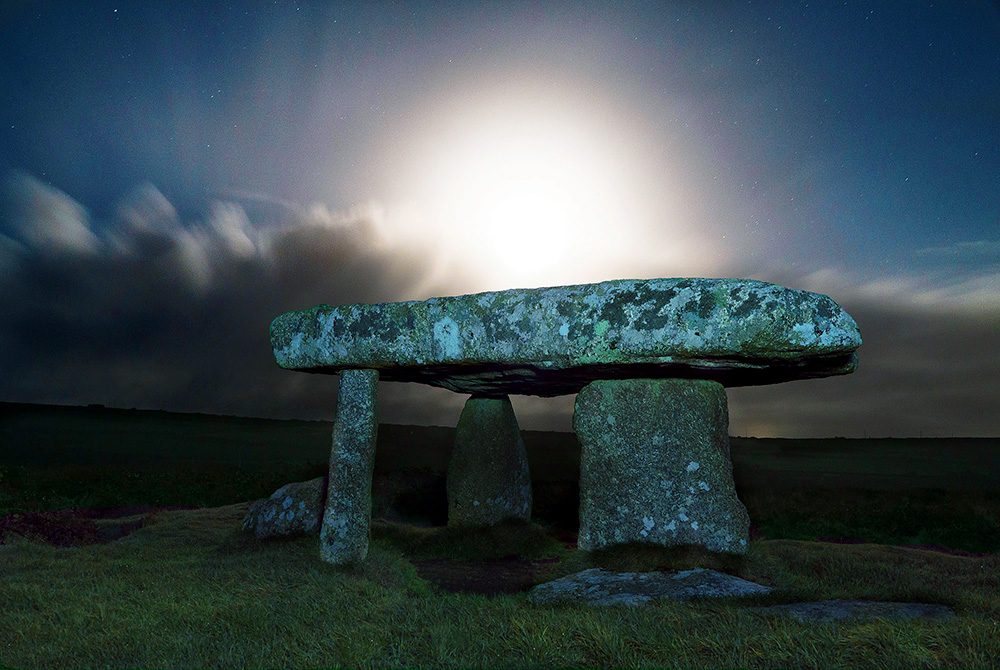 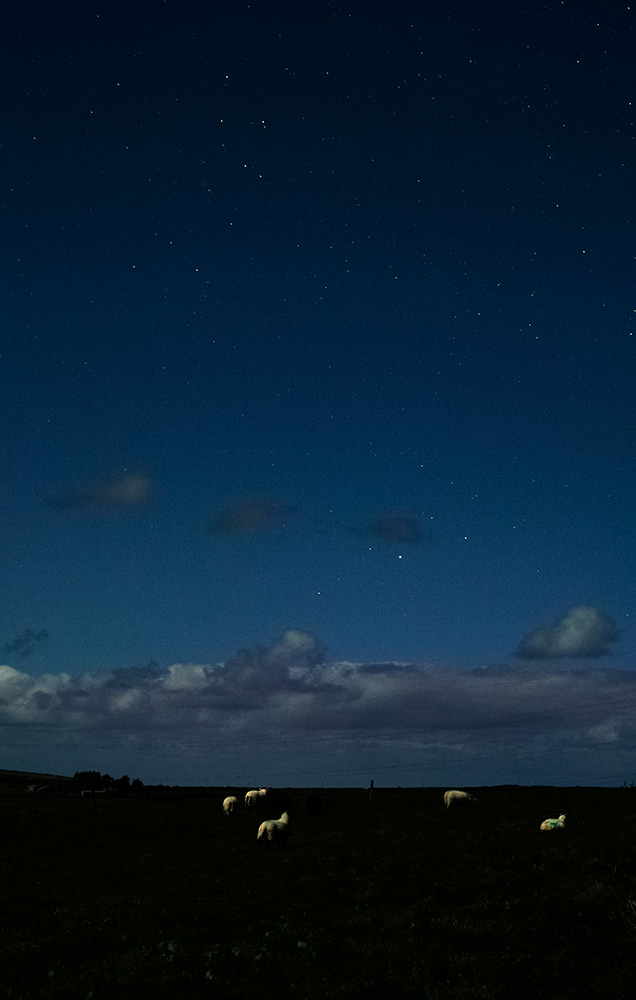 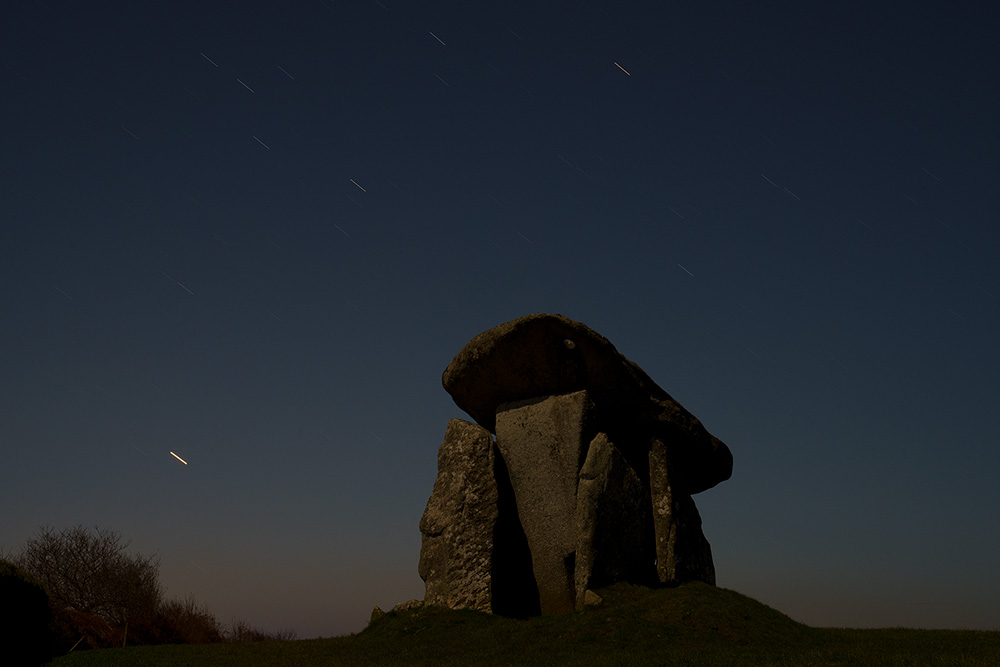 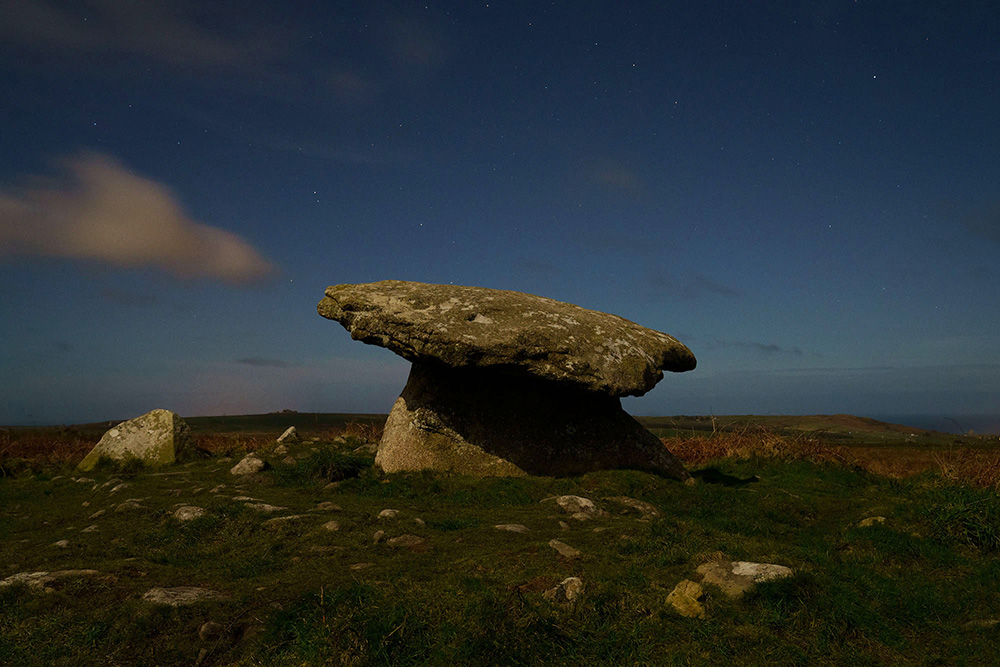 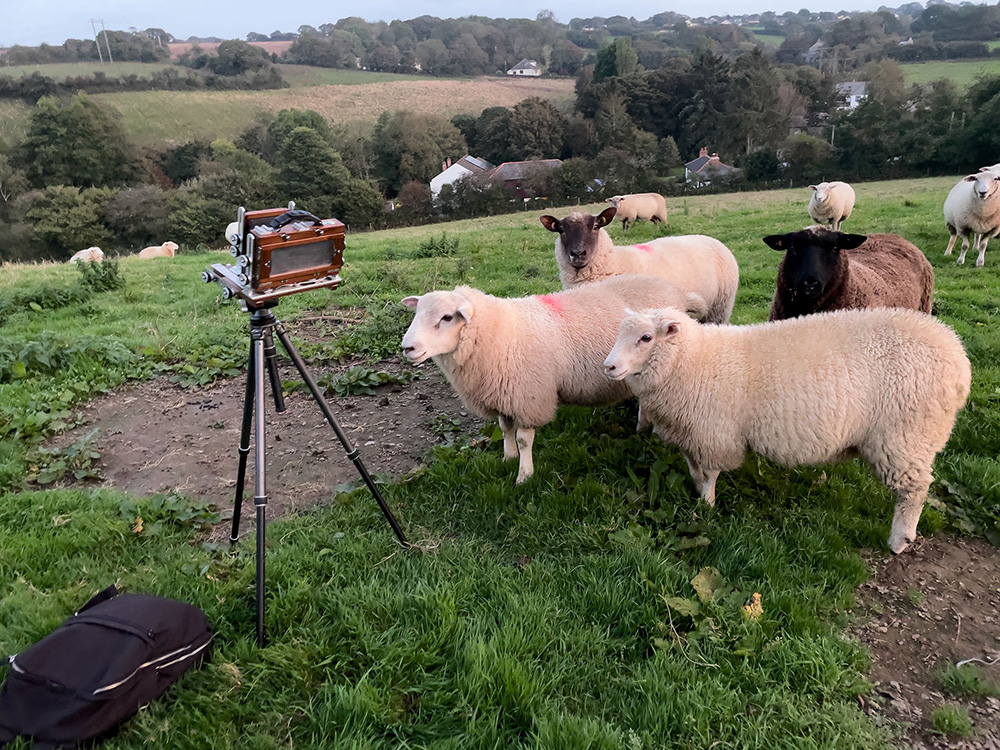 Lynn Saville is a fine-art photographer who specializes in photographing cities and rural settings at twilight and dawn, what she calls “the boundary times between night and day.” Her photographs have been published in four monographs: Acquainted with the Night (Rizzoli), Night/Shift (Monacelli), Dark City (Damiani), and Lost New York (KGP).

Saville’s work has been widely exhibited and praised. The following favorable notice of her retrospective exhibition at the Pratt Institute Photography Gallery appeared in The New Yorker: “There’s a long, rich history of New York photographers working at night, from Berenice Abbott to Joel Meyerowitz. Saville joins their ranks with these pictures …” Arthur C. Danto compared Saville’s work to Atget’s photographs of early-morning Paris: “Saville is his New York counterpart, the Atget of vanishing New York, prowling her city at the other end of the day …” In his recent book of essays, See/Saw: Looking at Photographs, Geoff Dyer wrote of Saville’s work, “The pristine silence, the lack of motion in these very still photographs, create the sense of a world that has dropped out of time—and therefore out of the cycle of transactions.”

Represented by the Yancey Richardson Gallery in New York, Saville has received many awards, including a 2022 Pollock-Krasner grant for “Elevated,” her project involving New York City’s elevated train lines. Currently, her solo public art show, “Grand Central Revealed,” a project commissioned by New York City’s MTA: ArtsDesign, is on view in Grand Central Terminal. Among her past awards are fellowships from the New York Foundation for the Arts and the New York State Council for the Arts and the Julia Margaret Cameron Award for Cityscapes.

Saville’s work is in the permanent art collections of major museums, corporations, and individuals, and many of her prints are archived in the David M. Rubenstein Rare Book and Manuscript Library, Duke University. She earned a B.A. at Duke and an M.F.A at Pratt Institute.