Mark Klett and Byron Wolfe have been collaborating on a series, Charting the Canyon, since 2007. The photographers have been re-photographing a variety of iconic views of the Grand Canyon and using digital technology to present old images in new contexts. The old images, which include paintings and drawings as well as photographs, are superimposed on new photographs—and vice versa—with provocative results.

Klett is a Regents Professor at Arizona State University, and Wolfe, a former student of Klett’s, is now a Lantis’ University Professor at California State University at Chico. Byron’s images of his family, Everyday: A Year Long Diary, won the Santa Fe Prize for Photography in 2004. He continues to rediscover the photographic landscape with projects like Lava Beds and the Modoc War and Lassen Volcanic National Park. Mark Klett has produced a number of series about the American West since the 1970’s, including his series (and book) of Saguaro typologies.

“We call them mash-ups of different times, experiences and ways of looking at the place,” Wolfe says. “It looks like we had the intention of revealing something about the medium, but that’s not the driving question behind what we’re doing. It’s more about being curious, having fun, and posing questions.” he explains.

Mark and Byron found two images made by 19th century photographer William Bell (see below) while on a geological expedition. The sepia-toned images show two adjacent buttes. Klett and Wolfe located the scene and Bell’s precise vantage point, then re-photographed a panoramic view in color. That contemporary image shows an RV cruising down a road that doesn’t exist in Bell’s images, which are superimposed on the panorama like windows looking into the past. The juxtaposition underscores a jarring sign of progress.

The Grand Canyon project started about two years ago when they were looking for new venues beyond Yosemite, where they had done a lot of previous work, and new ways to re-invent the methodology of re-photography. Rather than simply present before-and-after images, they started re-contextualizing the old and new images by combining them.

“By the time we got to the Grand Canyon, we were tired of a methodical [before and after] approach. We were wondering what we could do to push it. We were rethinking everything. It became more playful,” Klett says. 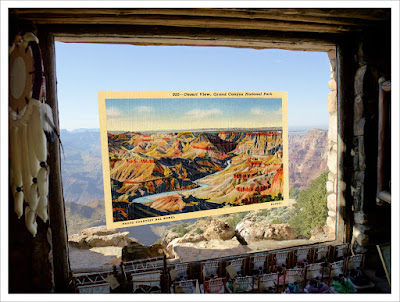 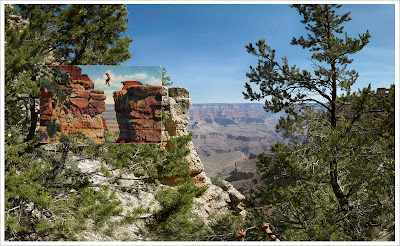 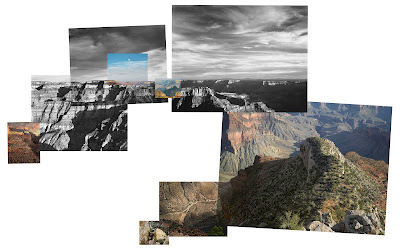 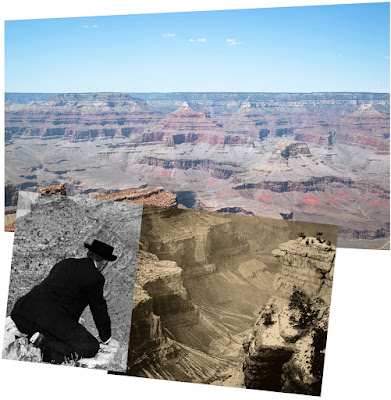 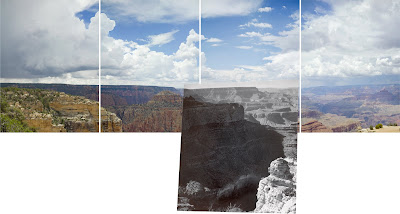