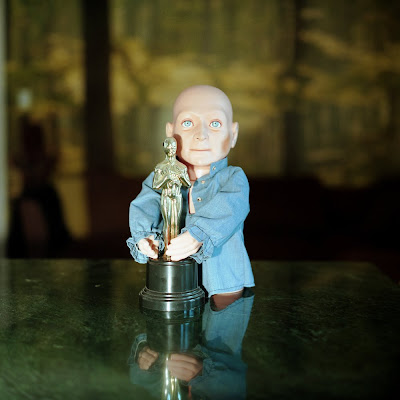 This post has nothing to do with photography per se, but it does have to do with the fact that I am attending the Academy Awards tonight. If this is not of interest, then move on to another more stimulating blog, but if you love the movies as much as I do, feel free to keep reading.

I am a total and complete movie buff, and have watched the Academy Awards ever since I could mouth the word, Oscar…Oscar…Oscar! It was a big event in my family, everyone gathered around the TV with their ballots and good guesses, and this tradition has continued on as a significant yearly event. For the last decade I have attended a very competitive Oscar party hosted by a screenwriter friend, and only once, did I bring home the gold as evidenced above. Last year, I made an effort to see everything–every short, documentary, and foreign film, even attending a lecture by the Los Angeles Film critics weighing in on their favorites, and unfortunately, I voted my heart, not my head, and lost. I always get tripped up by the small categories. So on this special day, while I’m getting all dressed up, patching together an outfit that might be considered grand entrance worthy, I thought I’d share a few stories from the Red Carpet….

A good friend, who is married to an award winning sound mixer, had attended the Oscars on a regular basis. Four years ago, she shared with me that her sister, who had recently passed away, had always wanted to attend. In her honor, she was sprinkling a few of her ashes on the red carpet…I seized the opportunity to tell her that my parents had also always wanted to attend and could she sprinkle a little of their ashes too (long story on all accounts). She was more than happy to oblige and once at the awards, carefully unloaded two small packets of ashes onto the red carpet, instilling a legacy that my parents and her sister get walked on by Hollywood royalty on an annual basis. 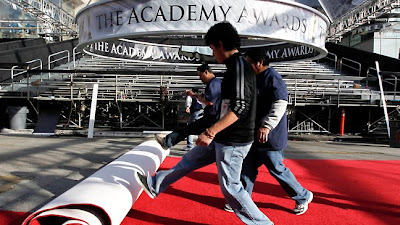 Three years ago, I was invited to the Oscars for the first time. To say this was a fulfillment of a dream doesn’t quite express my emotions–it was totally and completely surreal and wonderful. I invited one of my best friends who lives in New York (my husband had no interest in attending) who is also a huge Oscar hound, and it felt a bit like Thelma and Louise meet the red carpet. We had our hair and make-up done while a host of girlfriends drank champagne and commented on our transformations…and got into our limo around 3pm. Needless to say, we were totally giddy in the limo, knocking back various cocktails, and laughing at our good fortune.

When the limo hit Highland Blvd in Hollywood, it was completely closed off to all traffic except limos heading for the Academy Awards. The street was transformed into a 6 lane speedway for the glitterati, and all along the sidelines were cheering crowds, hoping for a glimpse of their favorite stars, not unlike ourselves. We rolled down our windows, and there idling next to my window was Viggo Mortensen, and on the other side, screaming fans, who had no clue as to who we were, but we waved back none the less. 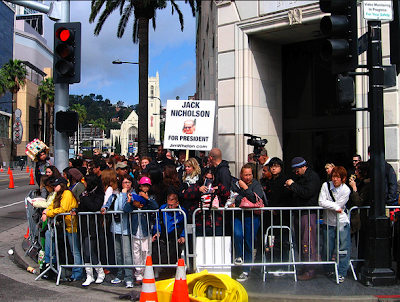 We were all let out at Hollywood Blvd. and getting onto the red carpet was not unlike getting into the White House–check point after check point, but instead of rubbing up against a senator or a politician, we walked along side Julie Christie, Cameron Diaz, Katherine Heigl, and, yes, Viggo. Once through the check points, the red carpet loomed….the left side flanked by the press, screaming to catch a star’s attention, the right side flanked by the fans who had waited for days to see their favorite stars. And down the middle of this red expanse, was a low slung velvet rope that separates Hollywood royalty from, well, people like me. Granted, it feels like we were all in this together, but the riff raff is moved to one side. Those who have attended the event in previous years, are savvy enough to know they should hug the velvet rope as they will appear in the background of many photographs as stars stop and turn to the press to be photographed. 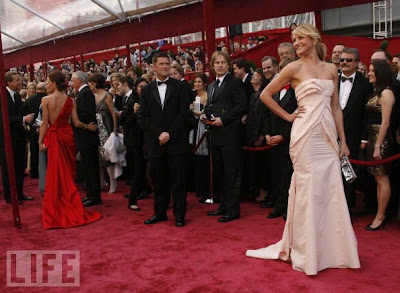 When we were close to the end of he red carpet, I turned to see Johnny Depp and Vanessa Paradis approaching and I stuck out my hand and shook his hand. I don’t think he was as excited as I was, but what the hey! 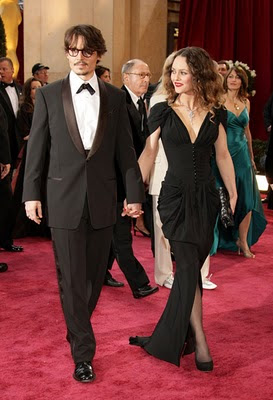 Once through the gauntlet, we all together again, climbing red carpeted stairs to the various balconies and our seats. I decided to use the Ladies’ Room, and was struck as I walked in by seeing a hexagonal room of mirrors and standing in front of each mirror, was a woman more beautiful than the next, reapplying lipstick or checking her hair. I was totally transfixed. And it dawned on me that where else in my lifetime, would I see people trying to look their very best–every man, woman, and child making an effort to be beautiful and glamorous.

The show itself was fun–Jon Stewart was the host, but I was too distracted looking at the surrounding audience and even though I has at the event, felt slightly removed from the action. Part of this was because we were in the nose bleed seats, but we were able to leave our sets and go to one of the many bars set up in the lobbies, and watch on flat screens while downing a quick vodka tonic. I remember feeling emotional when the song for Once won, and the Irish musicians gratefully accepted their Oscar. 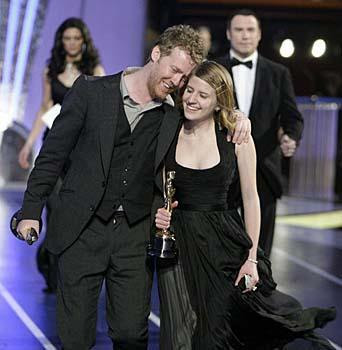 After the show ended, everyone flowed downstairs and I would catch glimpses of people clutching gold statues. There were coffee stations set up along the red carpet to warm the throngs as they waited for their limos–Patrick Dempsey and his wife were in line in front of us…and finally, once again in the limo, we felt like we were in Cinderella’s carriage about to be turned back into a pumpkin. We asked the driver to take us to the closest In and Out Burger to order the best meal of our lives. There is nothing like a big greasy burger and fries when you’ve been holding in your stomach for 6 hours. 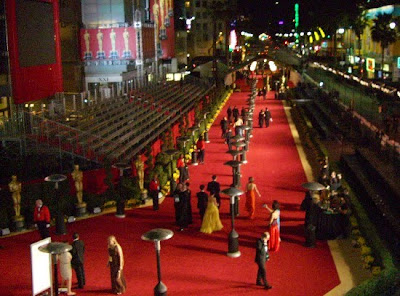 So tonight…I can’t wait to see James and Anne, and I’m rooting for Colin because of Pride and Prejudice and A Single Man (I try not to think about Mamma Mia) and have no strong feelings about the top 10 as I liked so many of this year’s films…and yes, I have seen them all.

And most importantly, what am I wearing? Think Cher meets Black Swan.

Tomorrow, back to photo business as normal, a little hungover and moving slowly. High heels take their toll. 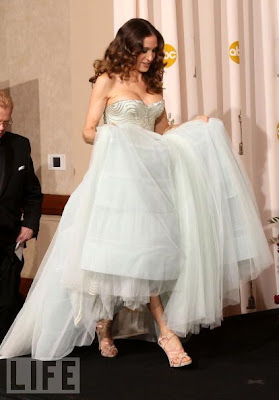