When I asked my friend J.Wesley Brown to suggest some night photographers for a power point I was creating, he recommended the work of Kevin Cooley. Kevin has a roster of wonderful projects all worth exploring. nachtfluge is featured below, but I also wanted to highlight his fabulous television-based public installation, REMOTE NATION, that is currently on display in New York (viewable from The High Line Park) through October 29th. There is a video of this piece on his site. 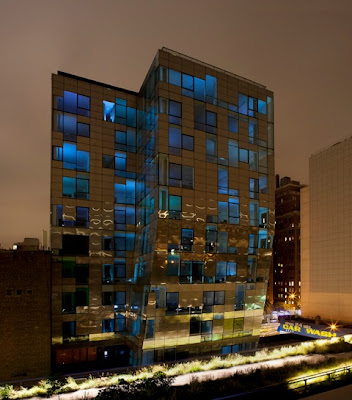 Kevin has installed a public art piece at 245 Tenth Ave, a newly completed Manhattan residential condo in Chelsea. On view nightly from the new section of the elevated High Line Park, the piece opens a dialogue about how modern technology simultaneously expands our connection to the world at large and lulls us into a state of entranced isolation, cutting us off from the people immediately around us. Throughout the building’s eleven floors, Cooley has placed 100 reclaimed analog televisions and linked them to a single video feed, creating the illusion that all the residents are home and tuned to the same station. The resulting light is unmistakably electronic, yet it pulses, breathes and changes colors in a manner reminiscent of aurora borealis. Looking from the outside in, the viewer becomes voyeur, witness to the collective solitude of a remote, tv-watching nation. 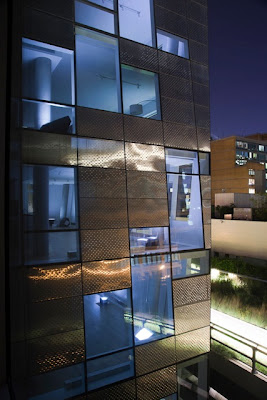 Inspired by observing his parents watching the same programs, but in separate parts of the house, the pictures flashing across Remote Nation’s TV screens arrive in real-time from Cooley’s father’s own television set in Niwot, Colorado – diverted across the continent with a combination of analog and digital technologies. A single TV set is visible from the High Line, allowing the public to see an abstracted, altered version of the original programming content that more closely resembles a fuzzy over-the-air broadcast from the past than today’s hyper real, crisp digital format. 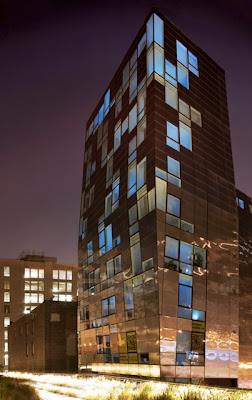 Remote Nation is viewable every night from the new section of the High Line Park north of West 23rd Street, and on street level on West 24th and 25th street just west of 10th Avenue until September 24th, 2011. This installation was made in cooperation with Prudential Douglas Elliman and through generous assistance from the owners of 245 Tenth Ave. 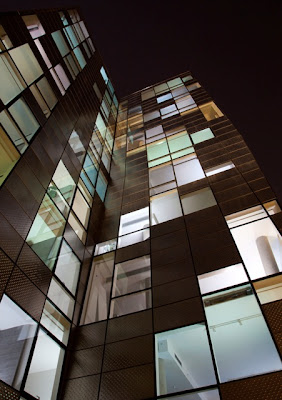 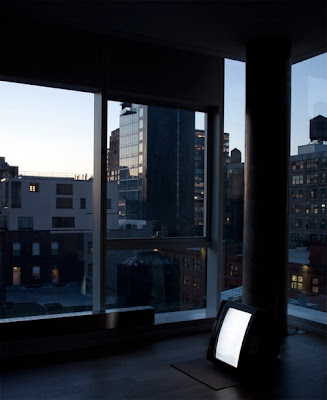 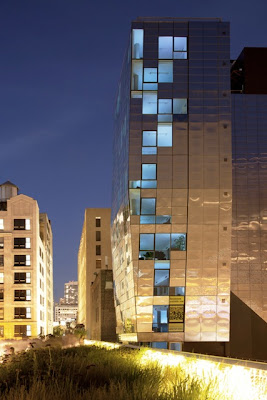 Statement for nachtfluge: Photography is by nature an exploration of time. The blink of an eye may be frozen by the shutter. Or in the case of this series, many minutes or even hours add up to construct a single image punctuated by the paths of commercial airplanes traversing the night skies. These white streaks, the only aspect of the planes visible in the photographs, are created by the landing and navigation lighting on every plane. Each line represents the amount of time it takes a commercial flight to pass through the frame. The work pays respect to pioneering photographers Edward Muybridge and Etienne-Jules Marey, and their studies of motion, while representing the passage of time in an unfamiliar, challenging, and visually rewarding manner. 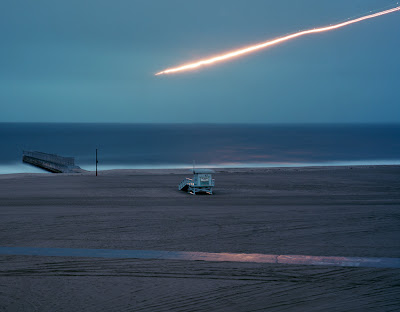 In photographing from residential and often marginal areas immediately surrounding large commercial airports, a sense of grace, solitude, and quiet peacefulness is created from the otherwise hectic airport environments. Gone are the long lines, the anxieties, and even the massive planes themselves. The audience is challenged to consider this work as metaphor for our desire for escape and the increasingly interconnected world in which we live. Ultimately, they are asked to reflect on the impact of all of this on the environment. 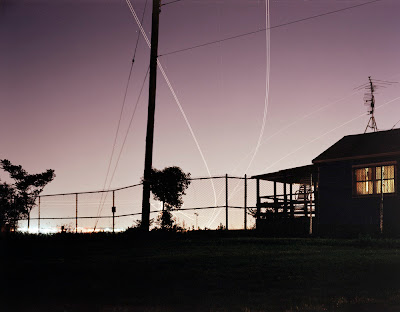 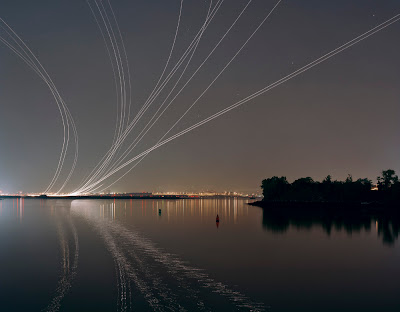 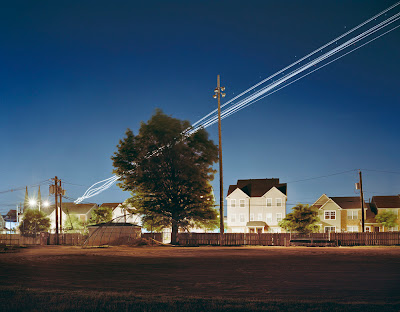 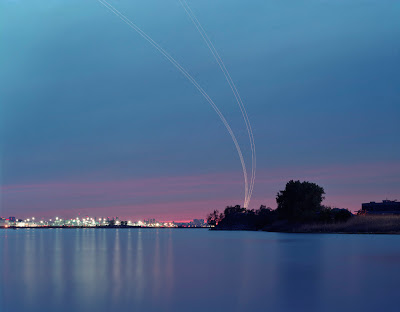 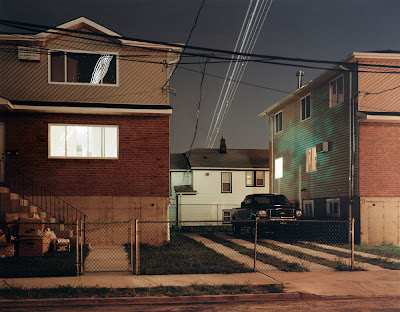 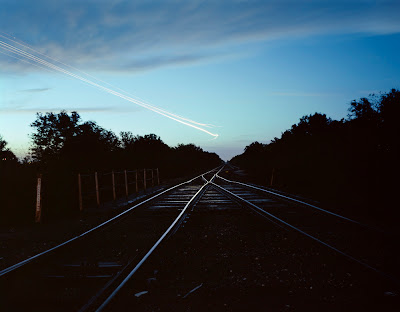 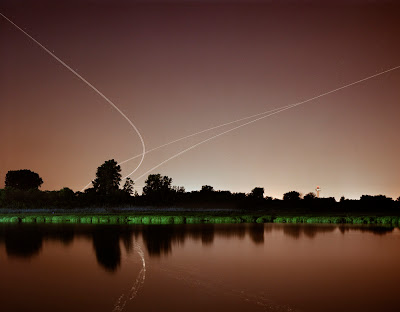 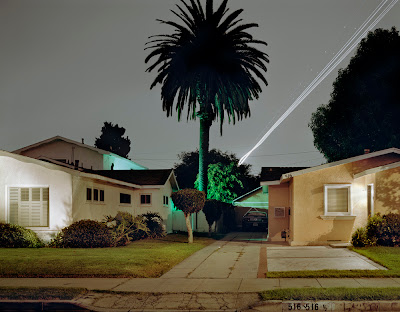 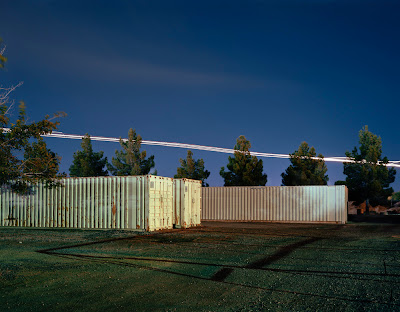 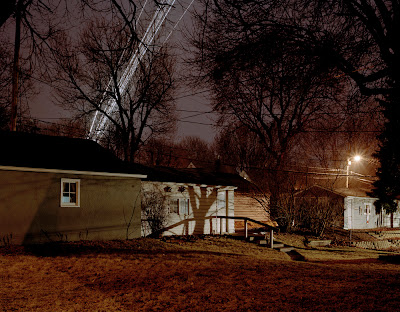