When I moved to New York many years ago, I was living alone in the city without family or connections. I spent endless hours at my window, watching the street activity in a city that was unfamiliar. Within weeks after arriving, I watched my first snowfall and experienced the sense of quiet brought on by a blanket of white, and by the summer, I watched drunken fights set to loud music and bottles being shattered. It was a cinematic experience on a daily basis.

Last week, I discovered the work of Hye-Ryoung Min on the aCurator blog, and immediately connected to her photographs. I wanted to share her series, Channel 247, on Lenscratch, but also a second body of work that is equally intriguing, In-between Double. Hye-Ryoung was born in South Korea and now lives and works in New York City. She is an editorial and fine art photographer and her work has been exhibited at Gallery LUX and Gallery Comma in Korea, and the School of Visual Arts Gallery and John Jay Gallery in New York. Most recently she received a Portfolio Award at the Seoul Photo Festival 2011 and exhibited in Seoul Museum of Art. Later in 2012, Hye-Ryoung will open a solo exhibition at Toyota Art Space supported by GoEun Photography Museum in Pusan, Korea.

Channel 247: I had five television sets at home. Three of them were in the living room and two were in the back, one in the bedroom and the other one in the kitchen. By “televisions” I actually mean windows. The three windows in the living room had the most interesting and varied shows and actors, since they give out on the main boulevard with its constant flow of people and situations. But I also enjoyed the daily shows in the backyard featuring a more regular cast of actors and private moments. 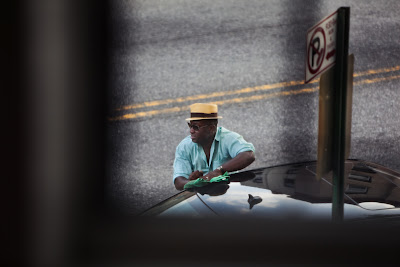 This kind of programming had a loose schedule and no guarantees that shows would play on time. For the most part, it was all silent film and the story lines were pretty much repetitive. However, I started noticing subtle nuances and differences from day to day. Repetition helped me understand actors’ basic characters; nuance and difference offered me clues into their hidden stories. 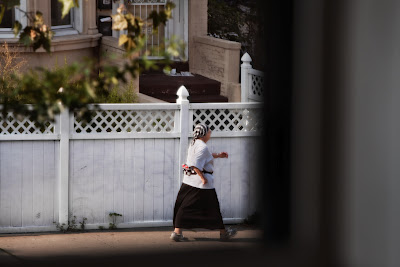 Before I knew it I was addicted and fell into the channel 247 day by day and for several months. Sometimes the channel had special seasonal broadcasts such as J’Ouvert, the West Indian American Day Parade at 4 o’clock in the morning; Mister Softy’s ice-cream truck during the summer, or middle-of-the-night backyard parties where illegal tattoo services were offered to ex-convicts who were full of confidence, laughter and loud cursing. 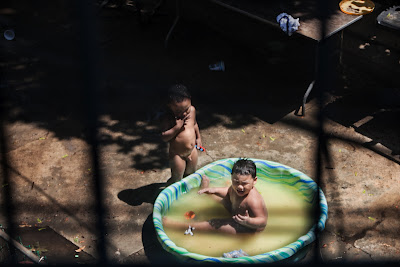 In my teens, I couldn’t help but think that somebody was watching me all the time so I had to act as a main actress in some kind of movie which made me feel self-conscious wherever I went. This might be typical of many other teenagers and it might even play a part in how one creates a sense of self. I remember when the movie, ‘The Truman Show’ came out in 1998. It opens with the question: “What if you were watched every moment of your life?” It completely matched my imagination. The movie went on to show how Truman would really feel after he realized the truth of his condition. ‘The Truman Show’ brought to an end my life on an imaginary movie set. Which leads me to ask: how different is our behavior when we are conscious of others around us? And what do involuntary actions tell or reveal about us? 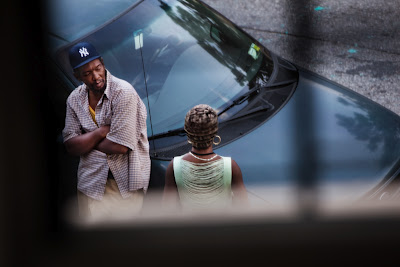 There are moments when people are oblivious of others, or simply don’t want to be mindful of anybody other than themselves. These moments happen between things, such as when we are rushing out to work in the morning, taking out the garbage, coming back from the deli with ready-made food, or maybe just sitting on a stoop daydreaming. Since I started watching people that I don’t know anything about – name, relationship, occupation, age, personal history – I have noticed that those moments can be more revealing of their personalities than when they are trying to make a good impression on others. 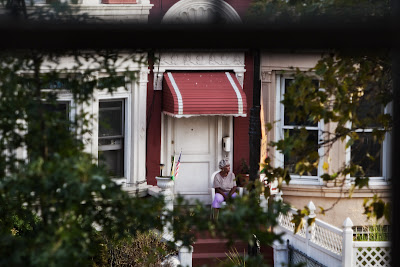 Leaving home, I sometimes bumped into some of the actors on the street unexpectedly. It was the only time that I got to see them up close and I almost wanted to say hello and thank them for the shows, but I couldn’t. I hoped they would never realize they had been constantly watched for months and want to escape from my TV set as Truman did. 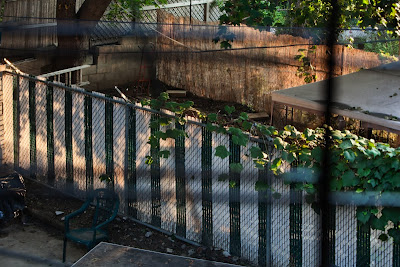 When I eventually left the neighborhood, I had to unsubscribe from Channel 247. 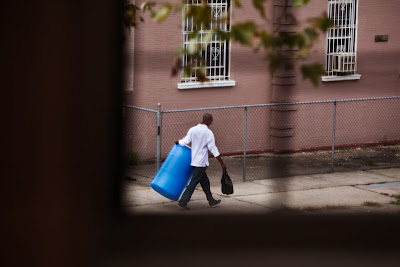 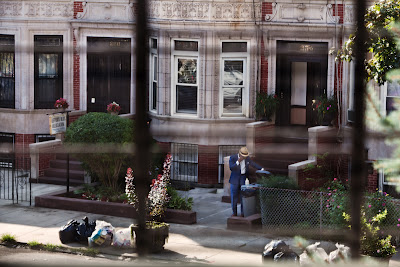 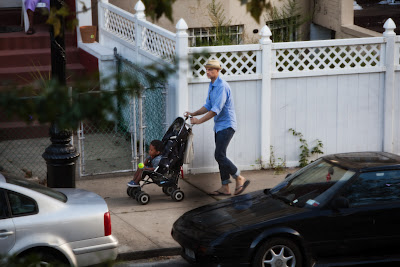 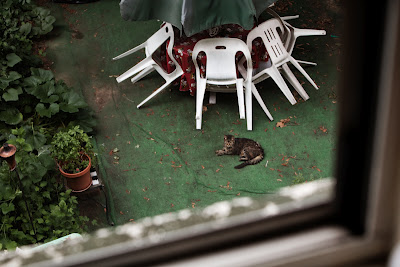 In-between Double: The human heart cannot make itself understood. And once the truth within that heart reaches out, through language, song or dance it inevitably becomes distorted and its shape is altered into
another. I believe that as photographers we can see into the lives of strangers. But our vision is only an approximation, an imperfect version of their reality. My series In-between Double is the image that results from the intersection of my path and their own; their shape colored by my feeling, translating into a third language. 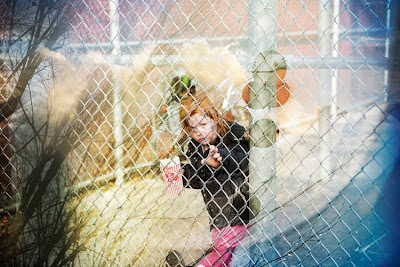 What kinds of thoughts do we live with? What are the recurrent themes that dominate our days or perhaps keep us from sleeping at night? And how do we chart the fleeting sensory perceptions that trigger the remembrance of things past? Can this kind of experience be represented photographically? 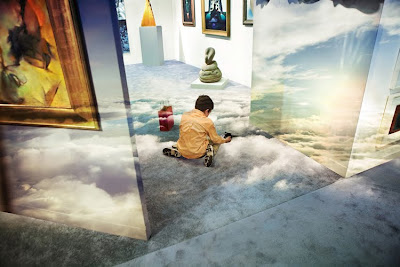 My series, In-between Double followed passerby through the rhythms of their daily lives and portrayed them by guessing at their hidden emotions. The resulting images are multi-layered explorations of the transient and evanescent nature of our humanity; a delicate weaving of thought, feeling and emotion: the vanishing echo of our passage through the world. 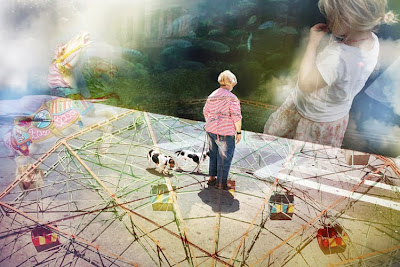 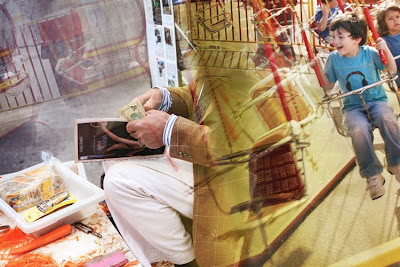 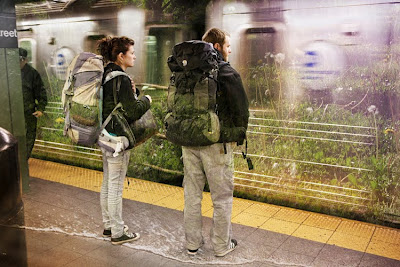 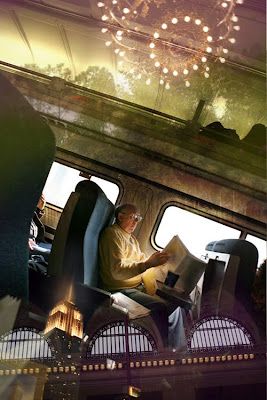 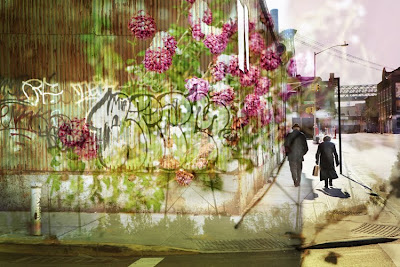 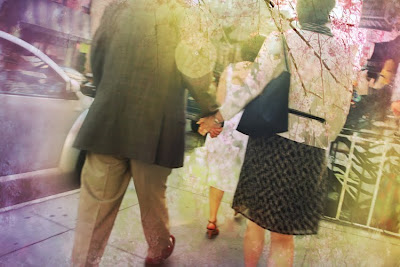 NEXT | This is Your World at the Carte Blanche Gallery >
< Mark Peterman: Interacting with My Past | PREV