Yesterday, I met an old lady at side of lotus pond and talked for two hours. She went to the front line as a nurse during World War II and saw incredibly hideous scenes almost every day. However, her face was so gentle, like an angel, and she had blooming and shiny skin. “Many friends died at the front line live inside of me.” That was what she said. It left me strong impression. Every time I talk to and hear their stories, I get into their dramatic life. My photographs will continue to reflect this quiet excitement, and lock the scent of the person, which comes out as he going through the life, into my pictures. 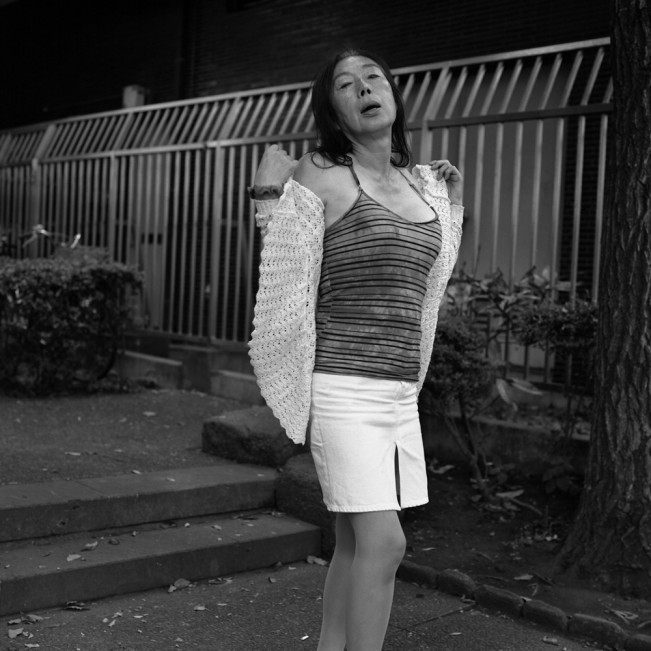 Many photographers are astute observers, but only the rare photographer can insinuate themselves into a stranger’s life, gaining trust and friendship, and then have the ability to create portraiture that truly captures a person’s essence. Japanese photographer, Tsutomu Yamagata states, “I’ve been shooting people for ten years, and have come to think that Portraits reflect and require the personality and philosophy of the photographer the most. My work starts by talking to the people casually without having a camera. Chatting and spending time over the small talks all day and it often end without taking any picture.”

I first encountered Tsutomu’s wonderful portrait project, Thirteen Orphans, when jurying Critical Mass and I was thrilled to see it make the Top 50 cut. Tsutomu also attended Review Santa Fe in 2013 and his work is part of an exhibit, “The Wind of Santa Fe”, at Gallery TANTOTEMPO in Kobe, Japan running through Dec 29th, 2013. The exhibition introduces  7 Japanese photographers those who participated to Review Santa Fe 2013. He is based in Tokyo and has been exhibiting in solo and group shows since 2007.

One day an old man in a plain suit sat next to me by a pond in a park. He began to put powder on his face and changed into a woman’s long-sleeved kimono. He started dancing to an enka – a Japanese popular ballad – playing on his radio cassette recorder, a big smile on his face.“What’s going on?” I was curious. He told me that he was a master of Japanese traditional dance, a homosexual, and that he had cancer. On another day I met an old millionaire in underwear who rode a clumsy bicycle, and yet another day I met a devilish-looking man who in fact was a mummy’s boy. The park is Ueno Park in Tokyo and the pond is a big lotus pond called Shinobazu-no-ike. As I went there more often, I met more people like them. Before long, I began to take photographs of them and to hear more of their stories. 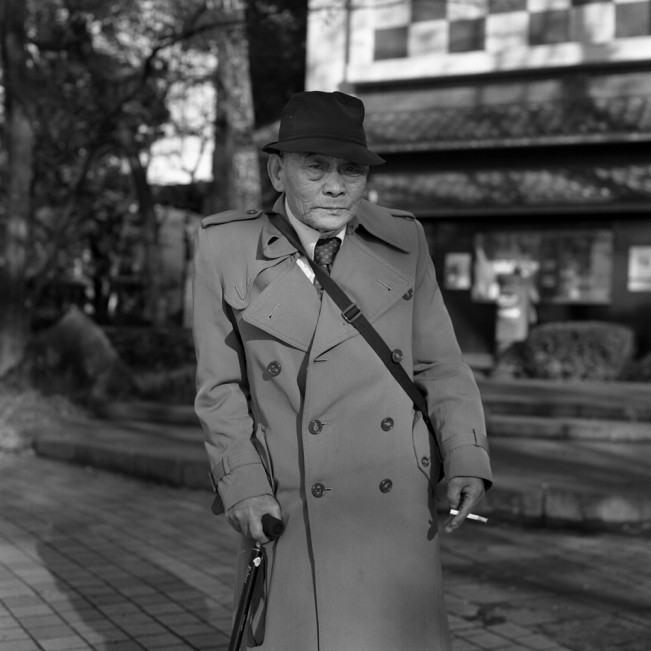 A former street peddler who advised me to be careful around Okonomi-yaki (Japanese pizza) stands because they are typically operated by the mob. ©Tsutomu Yamagata

There is something about the people I met at the park that particularly attracts me, something more than just how they look, just what they say about themselves. It is as if they had a kind of magnetic power, unseen and quiet, further attracting those who take a close look at them. What is it, this magnetic power, quietly striking a chord in my heart, the heart of the one who directs his/her attention to them? How can I capture this power when I take photographs of those people? How can I express this power through my photographs? In this work of portraits I pursue this problem. 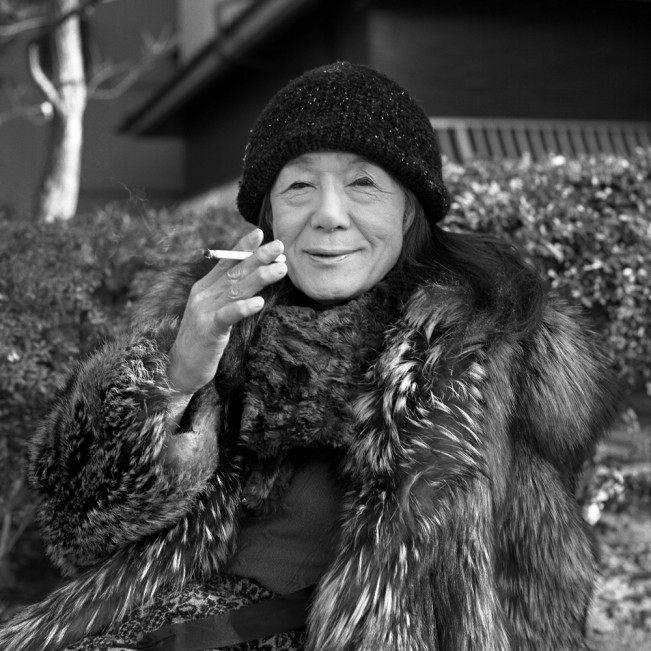 30 years since opening a bar in Asakusa, the number of customers has decreased year after year. ©Tsutomu Yamagata

When viewing a work of portraits, viewers want to know the identity of the subjects. When making and showing their works of portraits, photographers have utilized some types or categories to specify their subjects. August Sander showed his subjects under the categories of social stratum and occupation, and Diane Arbus focused on the deviant and marginalized people in the society. In addition, Hiroh Kikai continues photographing people with overwhelming presence. But those who became the models of my work do not go with such categorization. I go to the park earnestly and share time with the people who are there. Each model has his/her own background and character so unique that no types, no categories can wrap them up or specify them. It is as if all sorts of mutually-conflicting and complex human characters – vigor and weakness, harshness and gentleness, beauty and ugliness, and so forth – all reveal themselves as they are in each person, and quietly create a magnetic power of his own, of her own. It is this power that I want to express, neither replaceable nor reducible, the one-and-only magnetic power of each. One after another, Italked with the people and took their photographs, making their portraits one at a time. Thus I created this work. And this work I will continue. 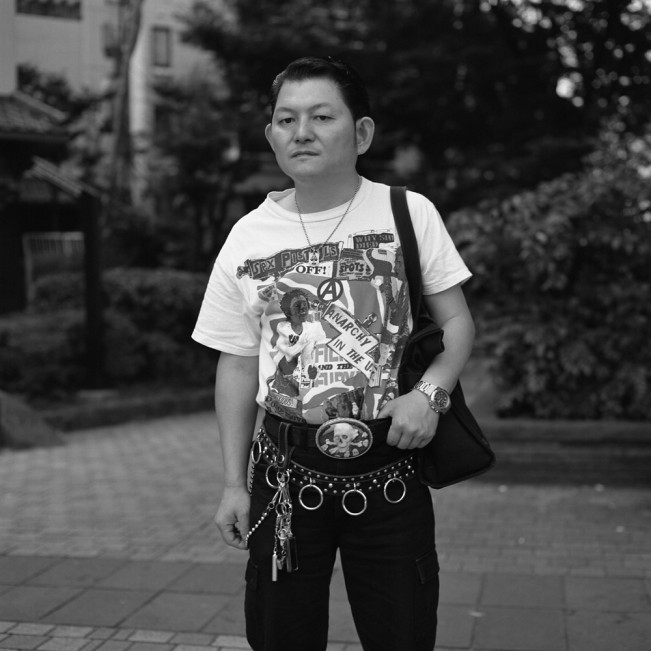 He used to be a lead vocalist in a heavy metal band, but now he just listens. He wears a tie 6 days a week. ©Tsutomu Yamagata

The work I named “Thirteen Orphans”. It is the name of the strongest hand in the game of mahjong. In most games, we collect series of the same type of cards and melds, but in this hand all the cards are unrelated to the others. However, if one card is missing, this hand is worthless. Each is unlike all the others; each combines to make the whole. Just like human society. 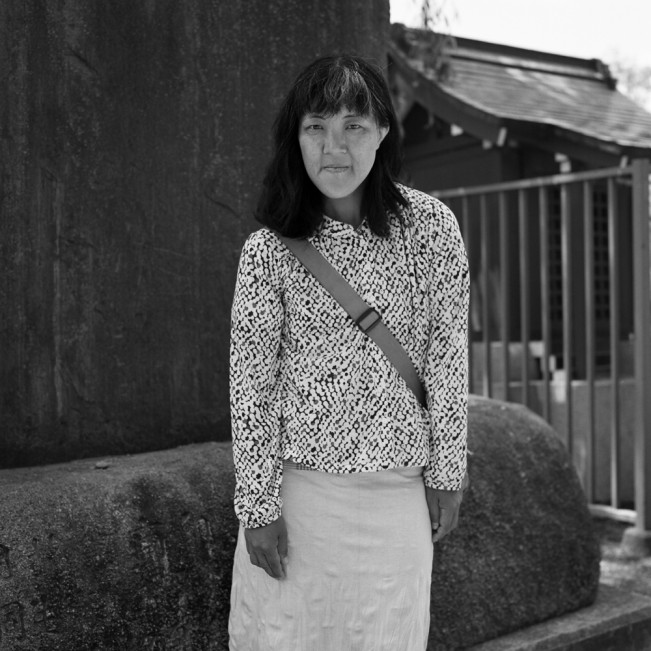 She became a prostitute 6 months ago. She still gets money from her parents, but hopes someday to get her job back as a kindergarten teacher. ©Tsutomu Yamagata 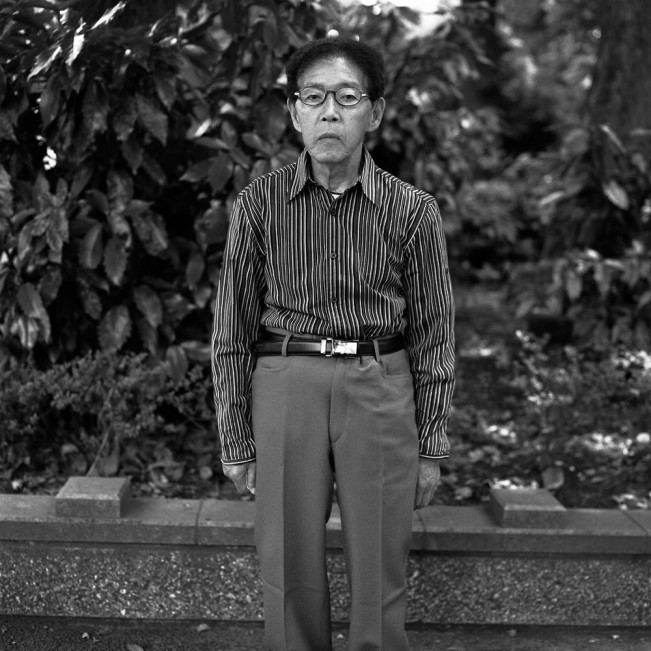 Last month, he found out he has prostate cancer but he hasn´t told his wife yet. ©Tsutomu Yamagata 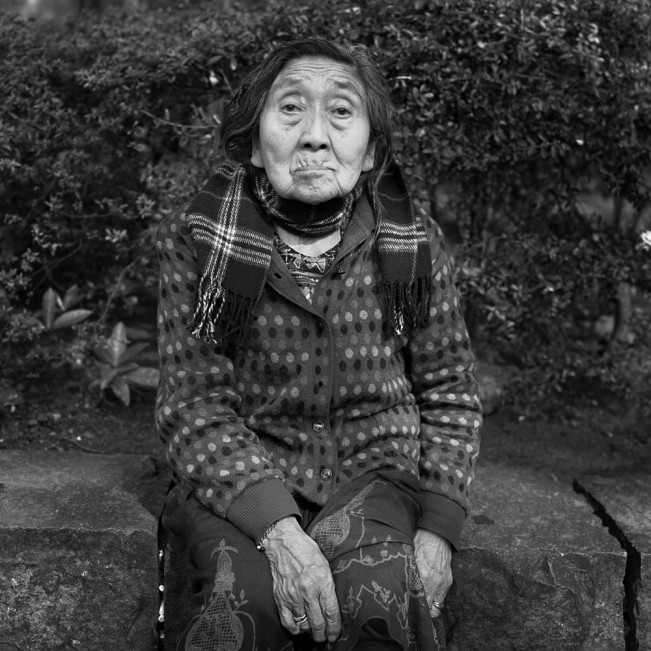 She comes for a walk once a month from Asakusa. She seldom meets her five sons. ©Tsutomu Yamagata 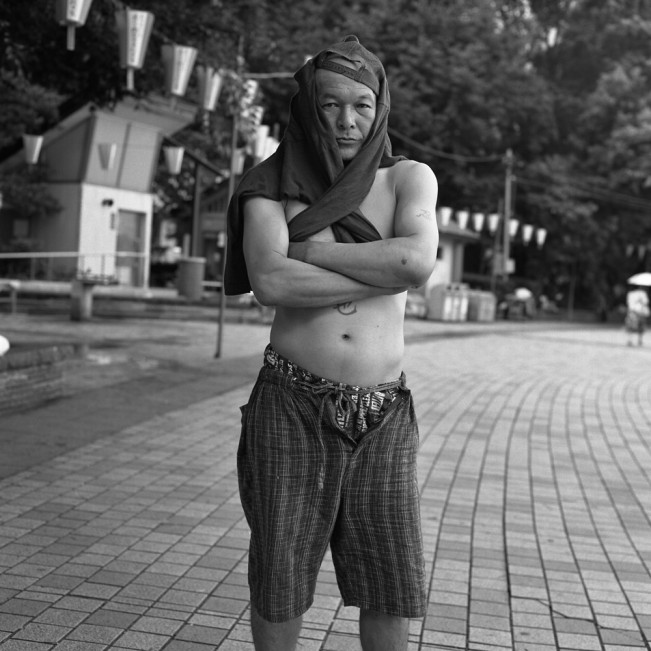 He is an Okinawa samisen musician who hides a tattoo on his chest that bears his name. ©Tsutomu Yamagata 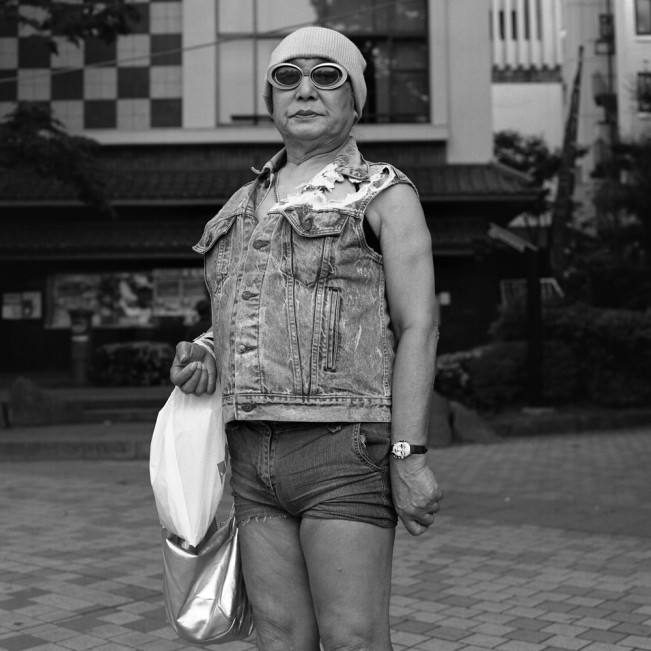 He opened a small bar in Shinjuku. The bar is always crowded with customers despite the bad economy. ©Tsutomu Yamagata 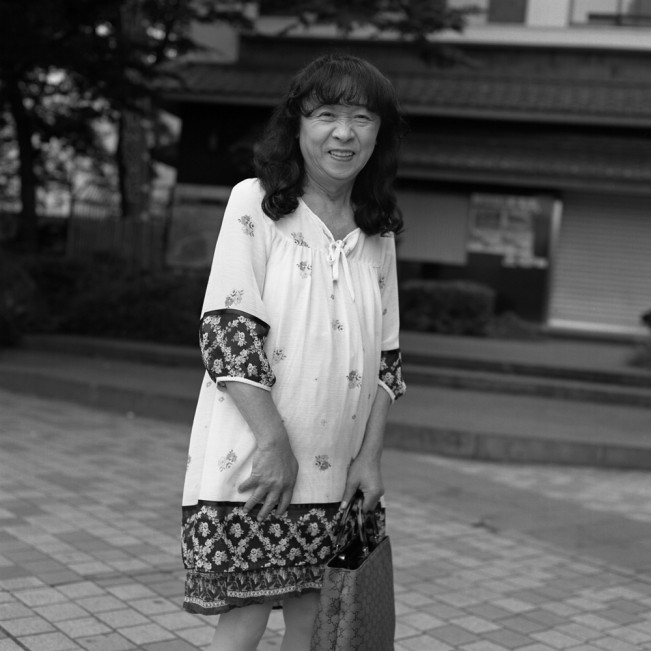 He´s been standing at the edge of this pond for 24 years. He is in fact, a straight man. It was his senior that taught him the trade. ©Tsutomu Yamagata 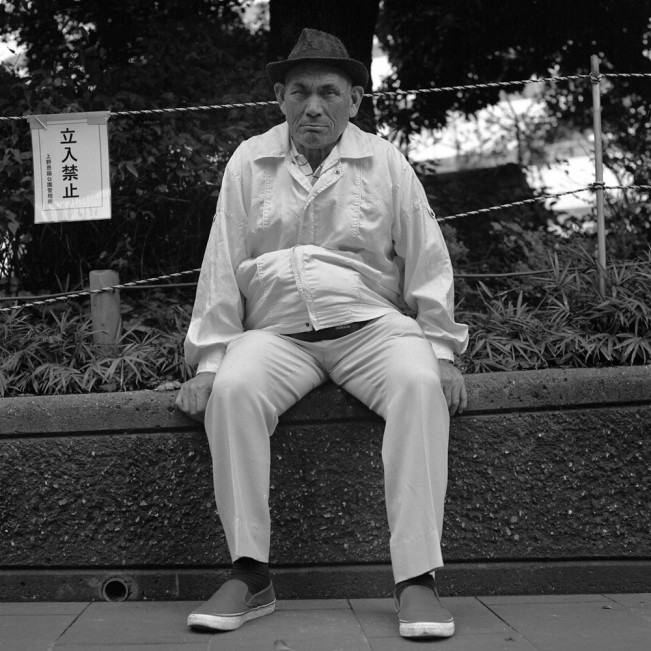 He is a recruiter. Everyday he recruits day laborers in Ueno. ©Tsutomu Yamagata 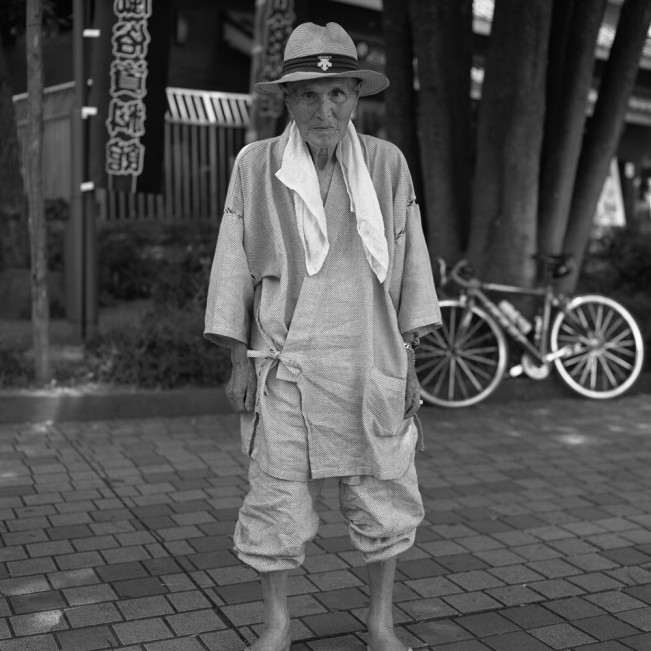 He takes Polaroid photographs of children, and gives them the photos on the spot. He spends his pension money on film. ©Tsutomu Yamagata 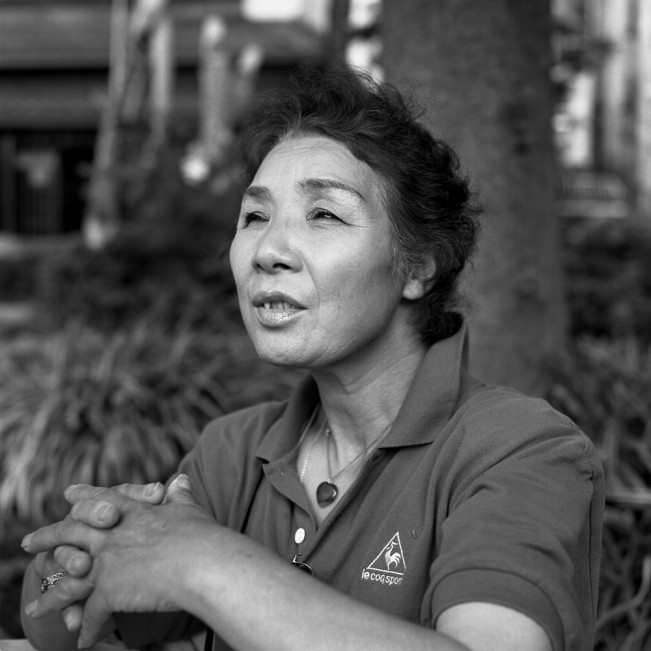 She is a lecturer of the Ponzi scheme. She constantly travels cross-country on foot and makes a large income. ©Tsutomu Yamagata 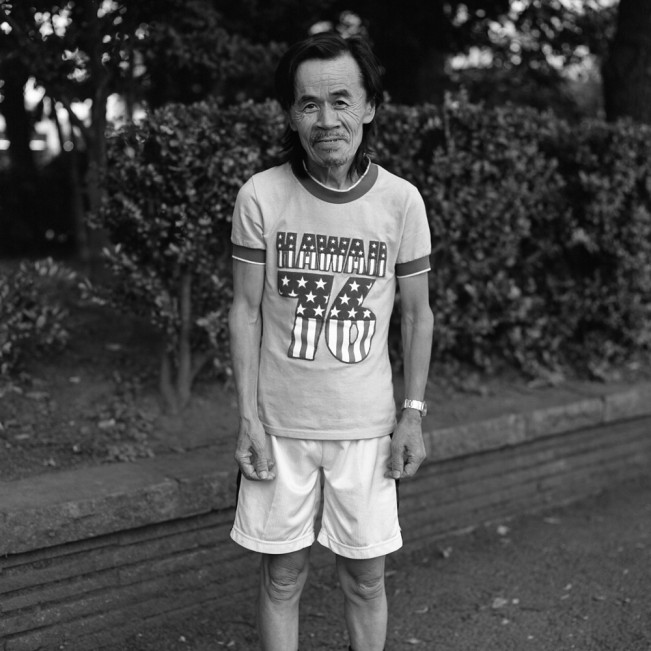 Even in midwinter, he wanders around in a T-shirt and shorts. When he gets cold, he runs. ©Tsutomu Yamagata 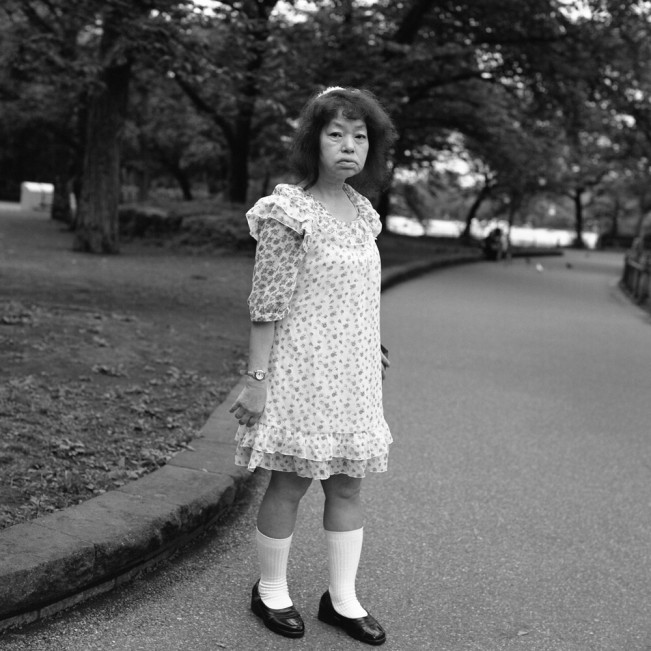