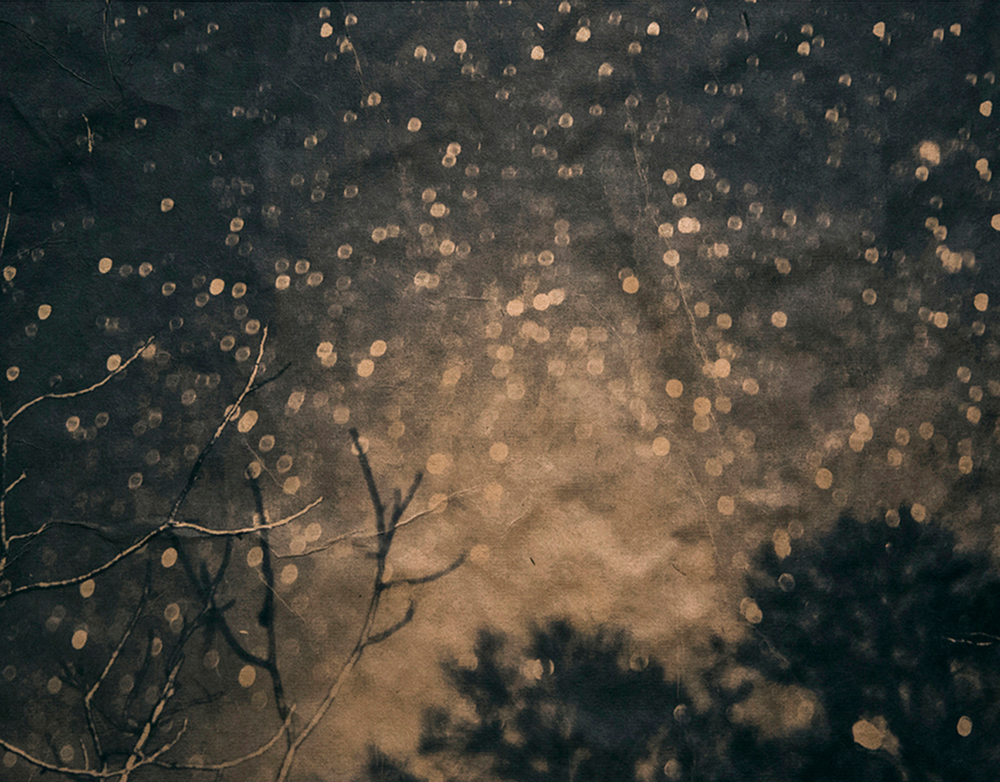 I met Jaime Johnson at the Society for Photographic Education (SPE) Annual Conference in New Orleans. We were both looking for a table to display our portfolios. I noticed that she was from a small town in Mississippi. As she was laying out these large images printed on fragile rice paper, showing the human figure with bones, branches and skeletons, all printed with a unique alternative process, I knew I had found someone I wanted to introduce to the LENSCRATCH audience.

Mississippi is a wild, haunting place as many of us have realized in reading works by authors such as William Faulkner. Jaime introduces us to this place. It is a scary world and not one where we should tread lightly or be unprepared. At this time, when the role of women is being discussed in limiting terms, I rejoice in her concept of the “feral woman” finding her way through what is still a “treacherous” environment. It’s good to know we can go back to nature to find the inspiration needed to survive and overcome the obstacles along the way.

In some ways an online portrayal fails to capture the “untamed” rawness of her tactile images and their translucent quality; you need to hold them in your hands up to the light to fully appreciate them. But, at least, they leave us with a haunting reminder that the gap between nature and ourselves may be smaller than we acknowledge.

Jaime Johnson grew up in Poplarville, Mississippi, in the Pine Belt region of Mississippi. Jaime received her BFA from the University of Mississippi in Imaging Arts in 2011 and her MFA in Photography from Louisiana Tech University in 2014. Her work has been exhibited in venues across the United States, including The Center for Fine Art Photography in Fort Collins, Colorado; the SOHO Photo Gallery in New York; and the Ogden Museum of Southern Art in New Orleans, Louisiana. Her work has been published in Shots Magazine, Don’t Take Pictures, Light Leaked, and Seites, and her series Untamed won the Grand Prize in Character: Portraits and Stories that Reveal the Human Condition, sponsored by Maine Media Workshops. Jaime currently teaches as an Adjunct Instructor in Art at the University of Mississippi in Oxford, MS. A collection of Jaime’s work will be featured as part of the 2016 Mississippi Invitational exhibition, opening at the Mississippi Museum of Art from December 17, 2016- March 11, 2017.

Poet Mary Oliver stated, “I think when we lose the connection with the natural world, we tend to forget that we’re animals, that we need the Earth. And that can be devastating.” My series Untamed is set in the swamps and woods of Mississippi and Louisiana, natural places where one confronts life and death, growth and decay. Taking on the mindset of a feral woman, I collect the bones, branches, and flora and tread with the animals, both living and dead. My portrayal of the wild woman character counteracts stereotypical depictions of the feminine as fragile and weak, instead revealing a strong woman navigating the treacherous landscape around her. Gathering nature’s fragments to preserve them from the danger of being lost to the world, I reflect upon the forms, the impermanence, and the interconnectedness of natural life.

The photographs are printed using the historic cyanotype process, which shifts focus from potentially colorful landscapes and figures to patterns, textures, and the relationships of forms within the images. Tea-staining the prints dulls the blue and adds warmth, mimicking the earth tones I encounter in the wilderness. Printing on thin Japanese paper adds translucence and gives the prints a feeling of fragility. My photography work offers the viewer a shared experience and connection with nature, during times in which society is becoming removed from the natural world. 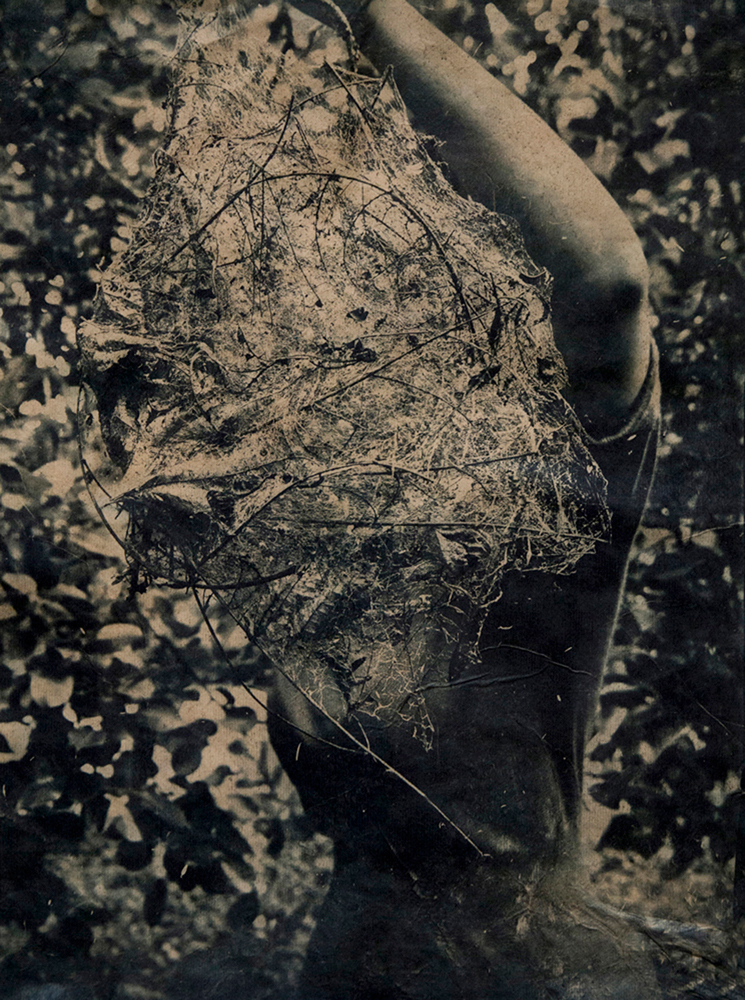 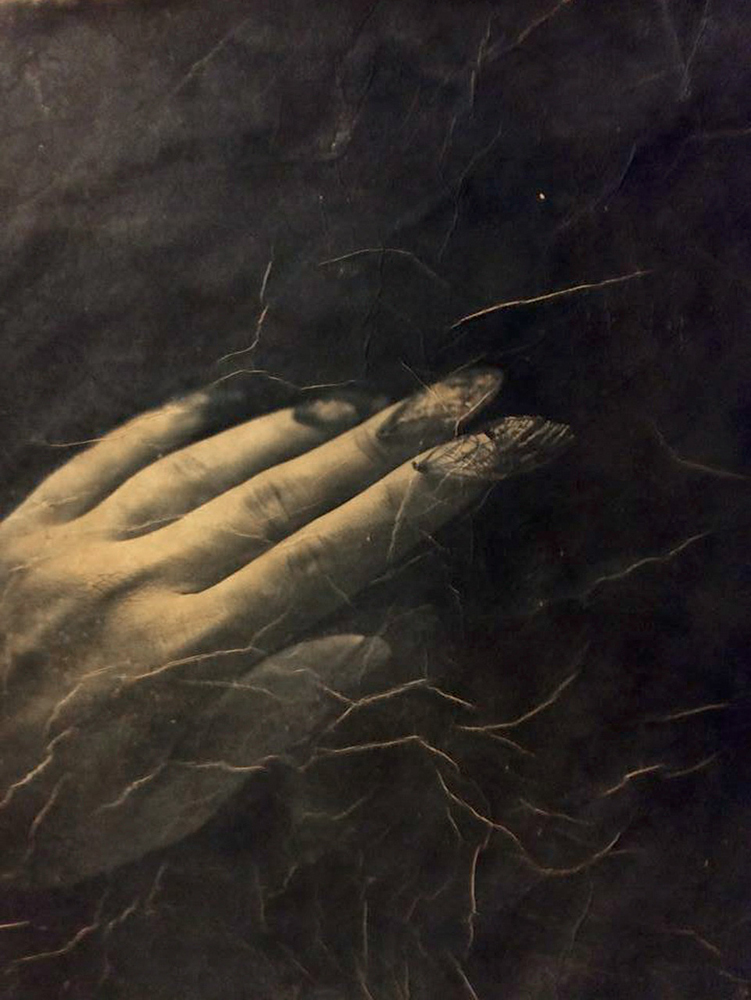 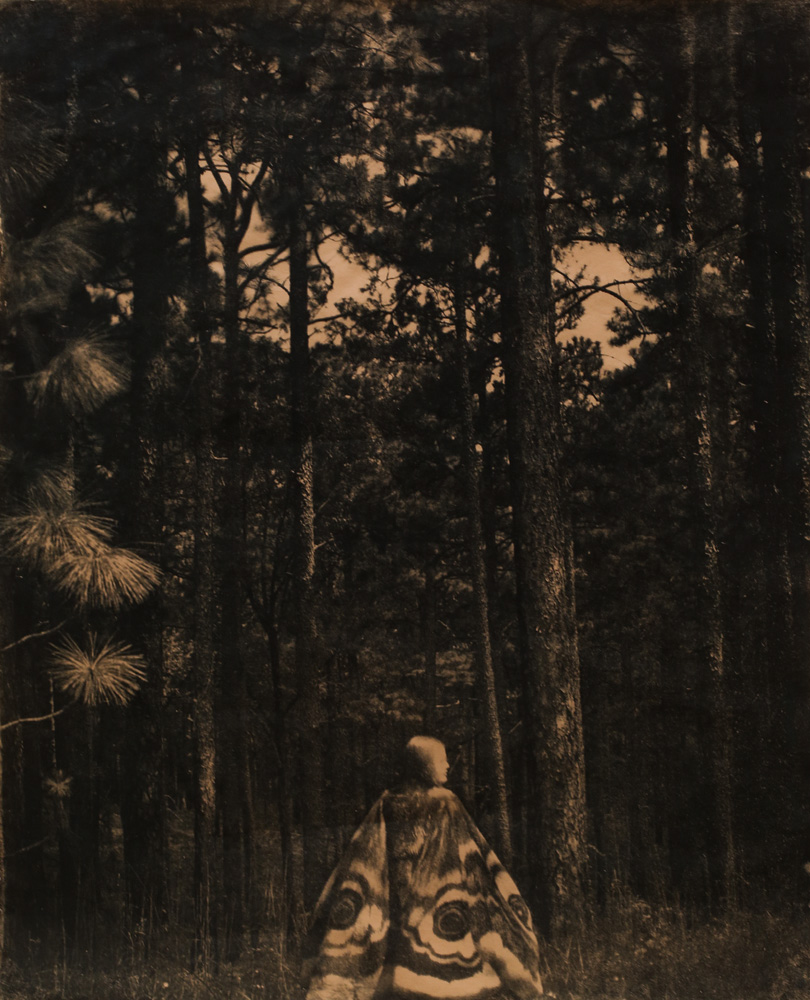 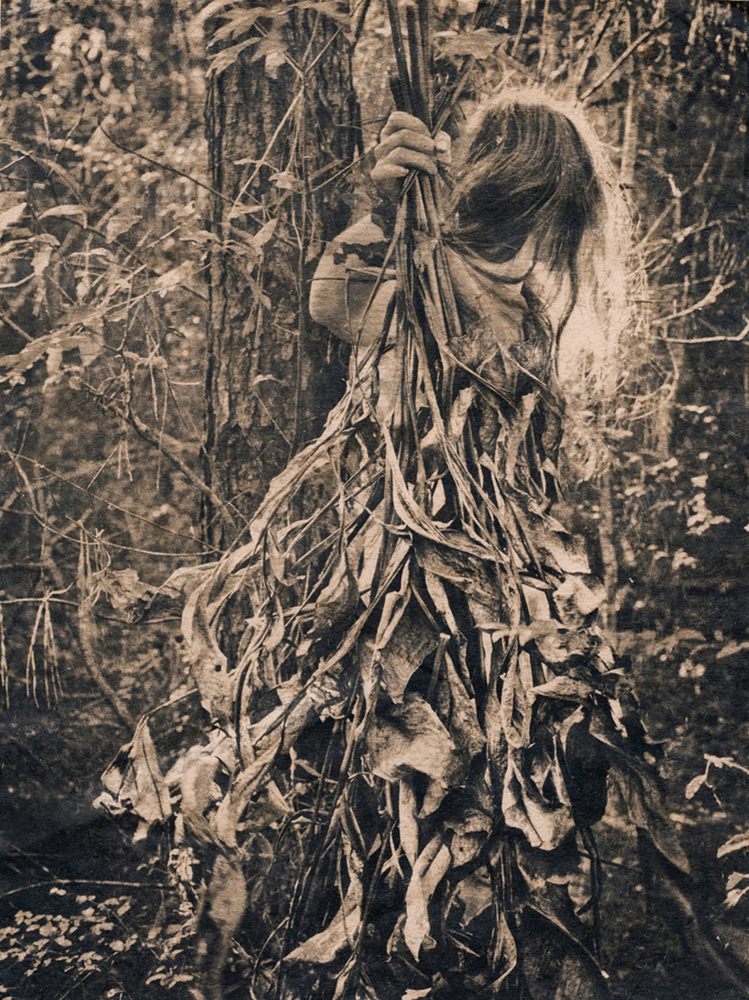 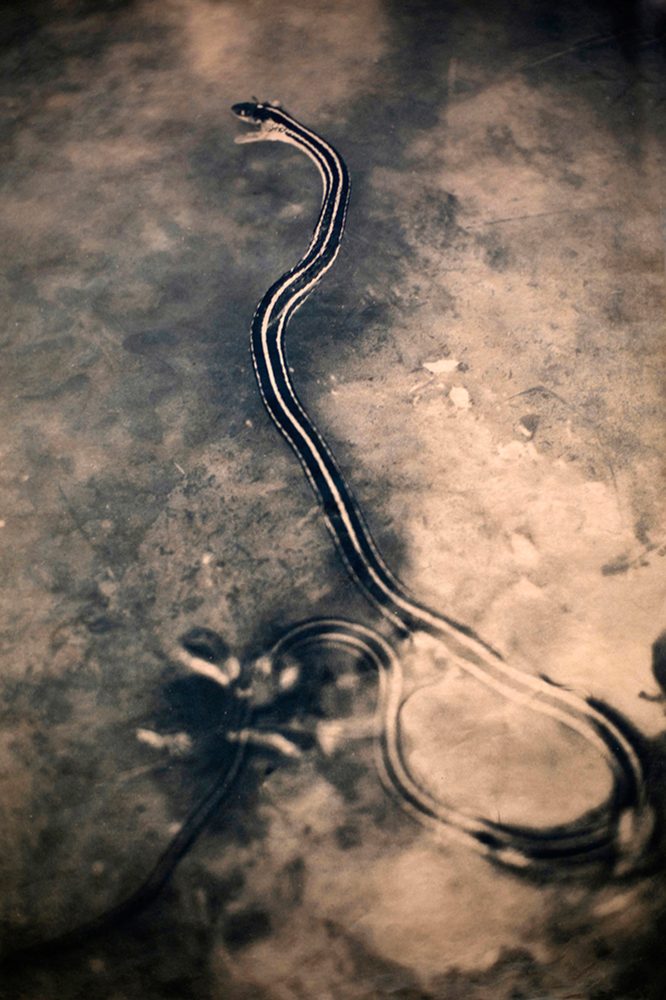 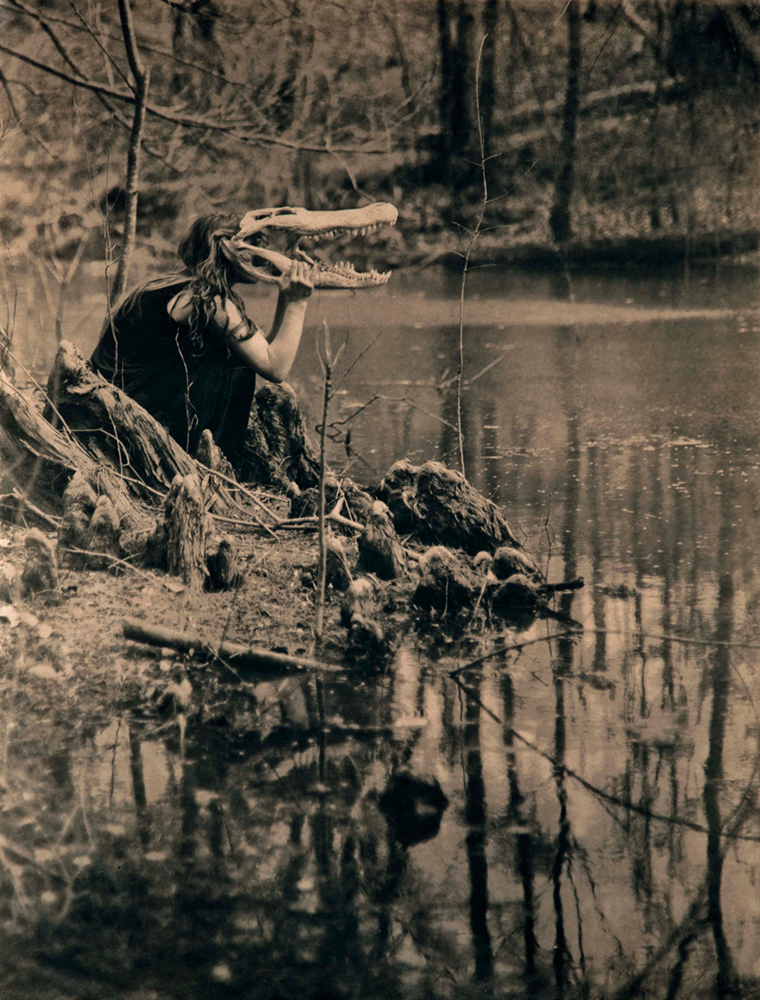 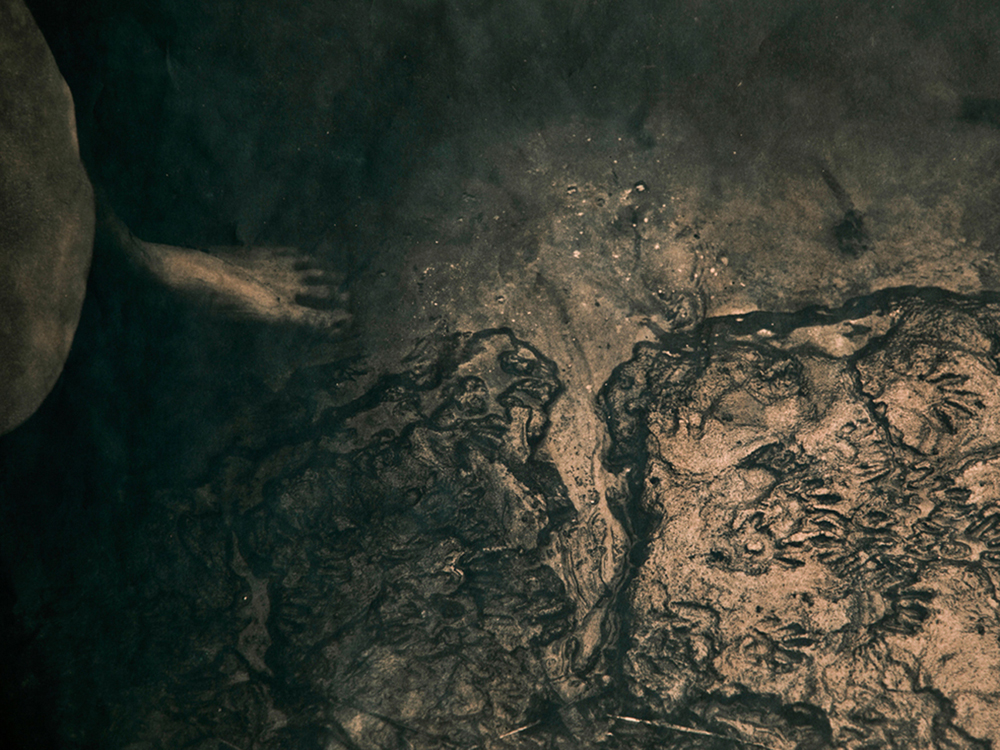 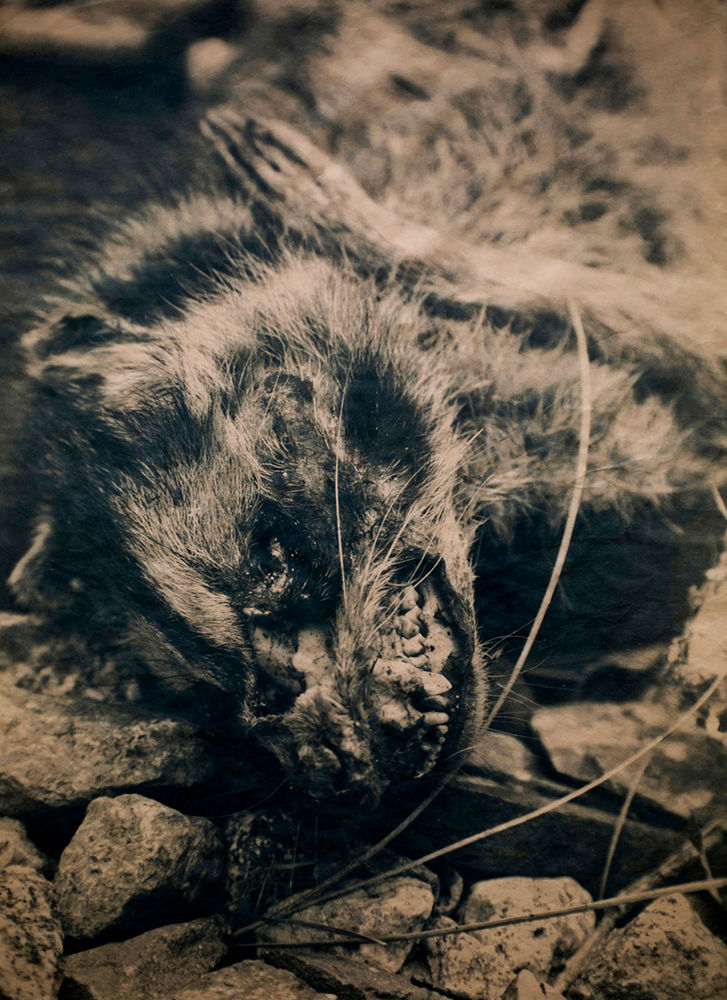 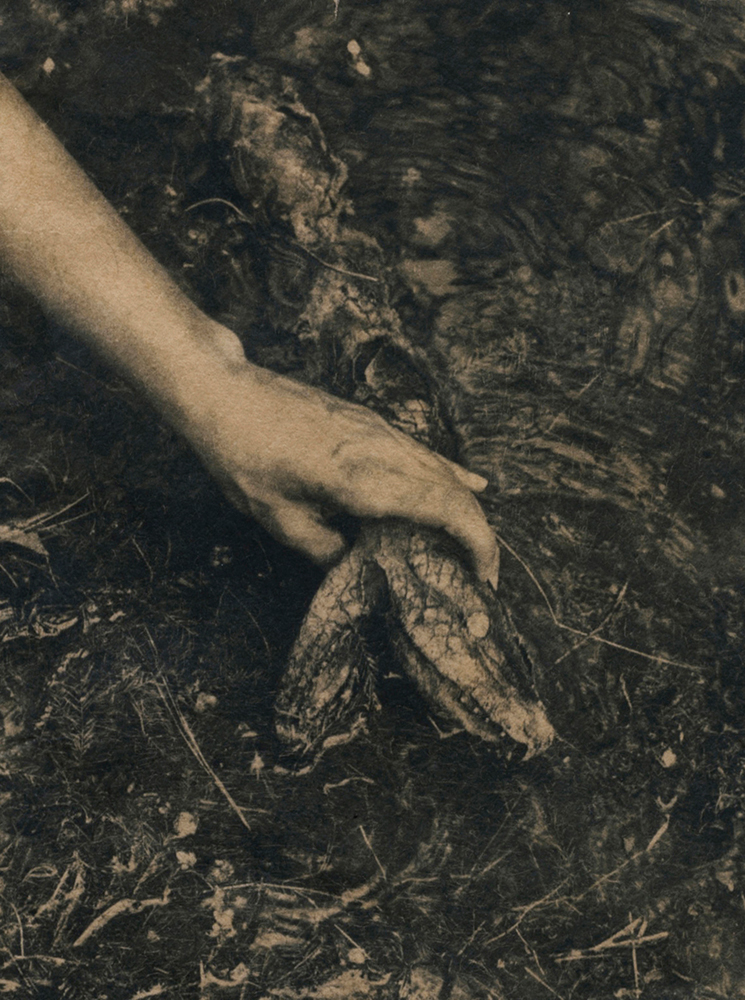 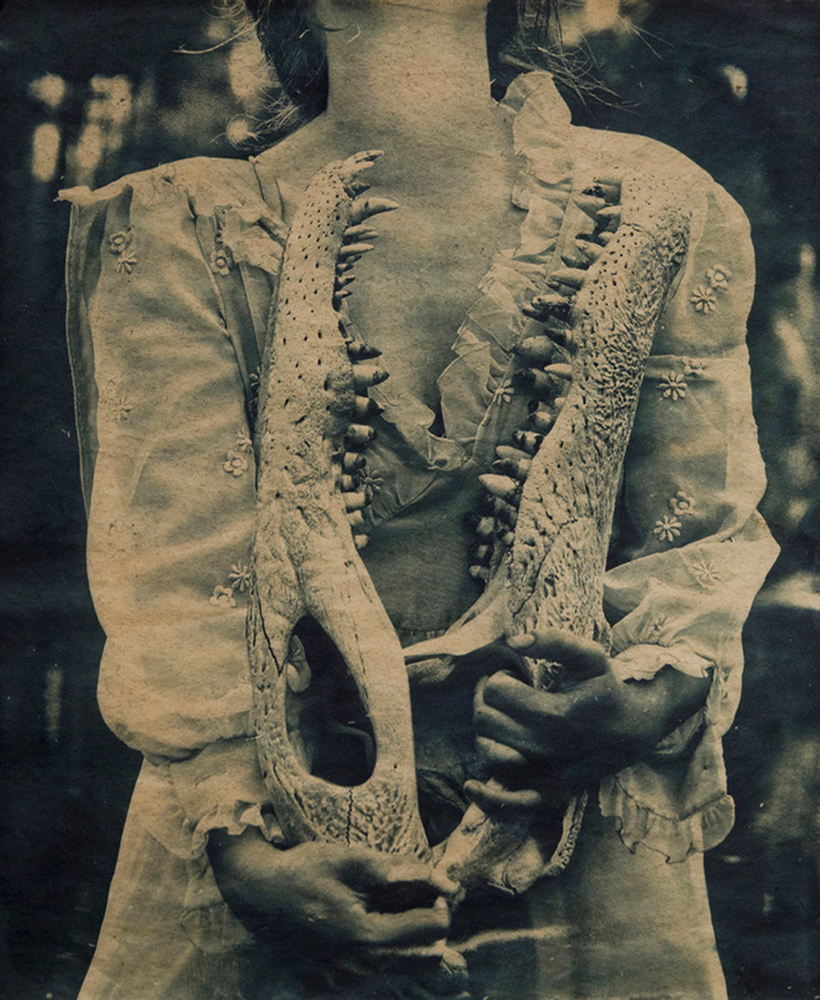 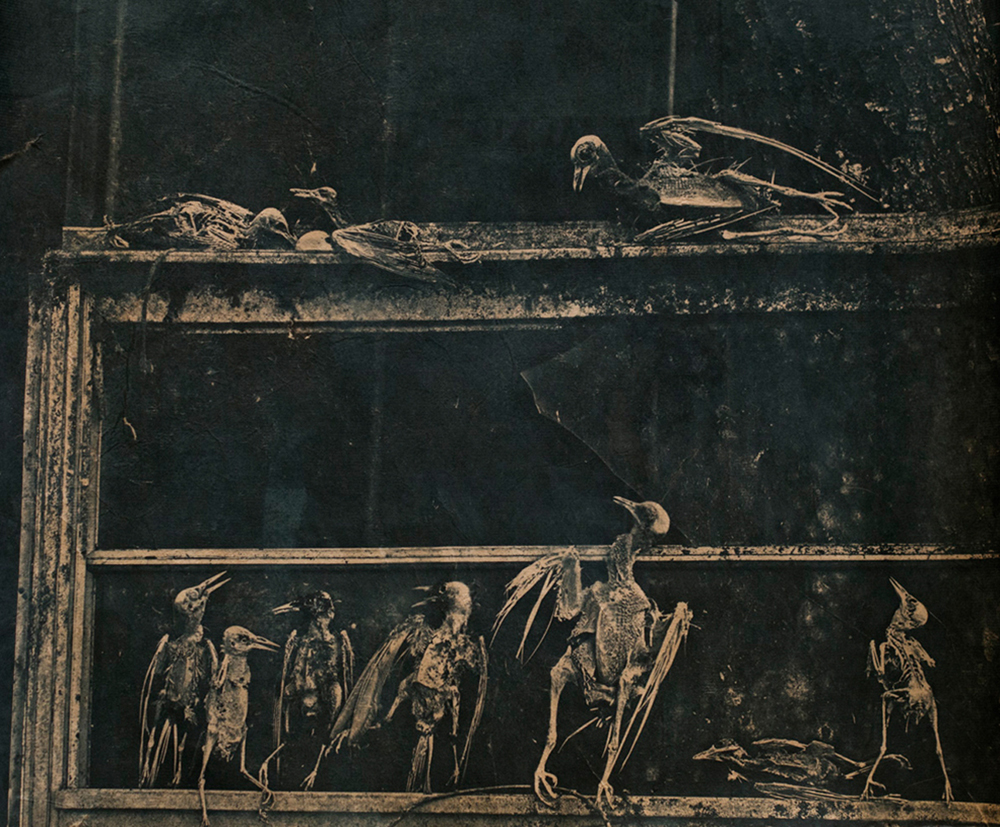 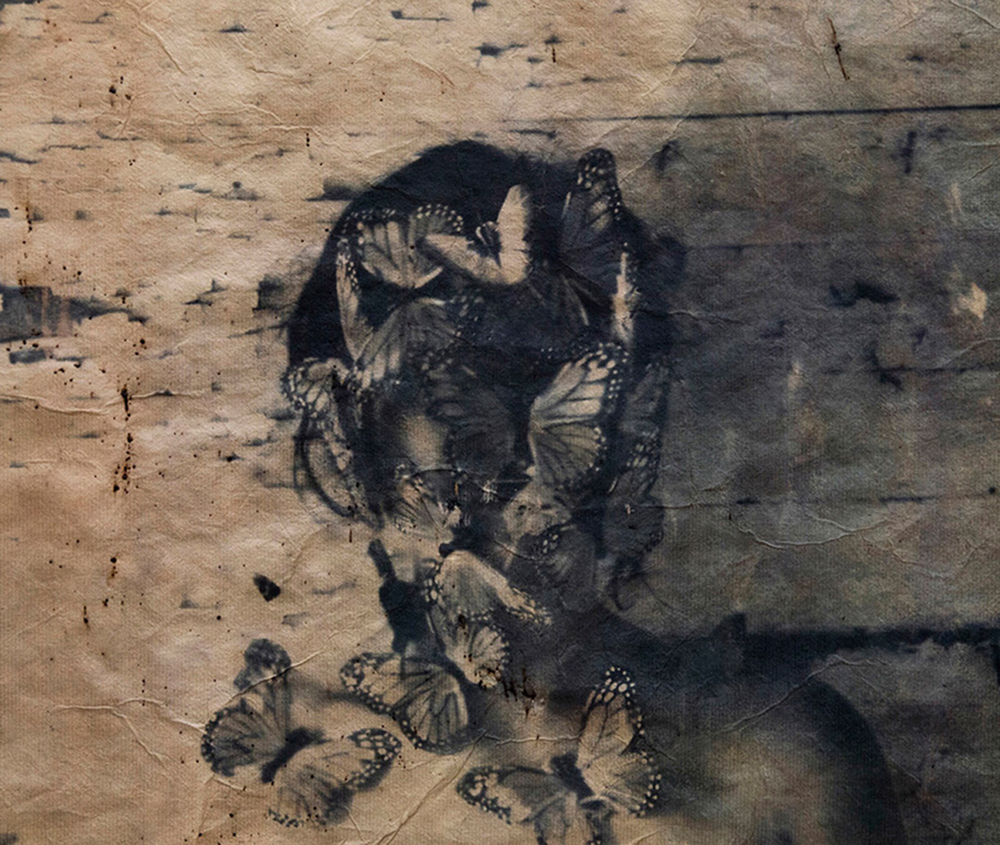 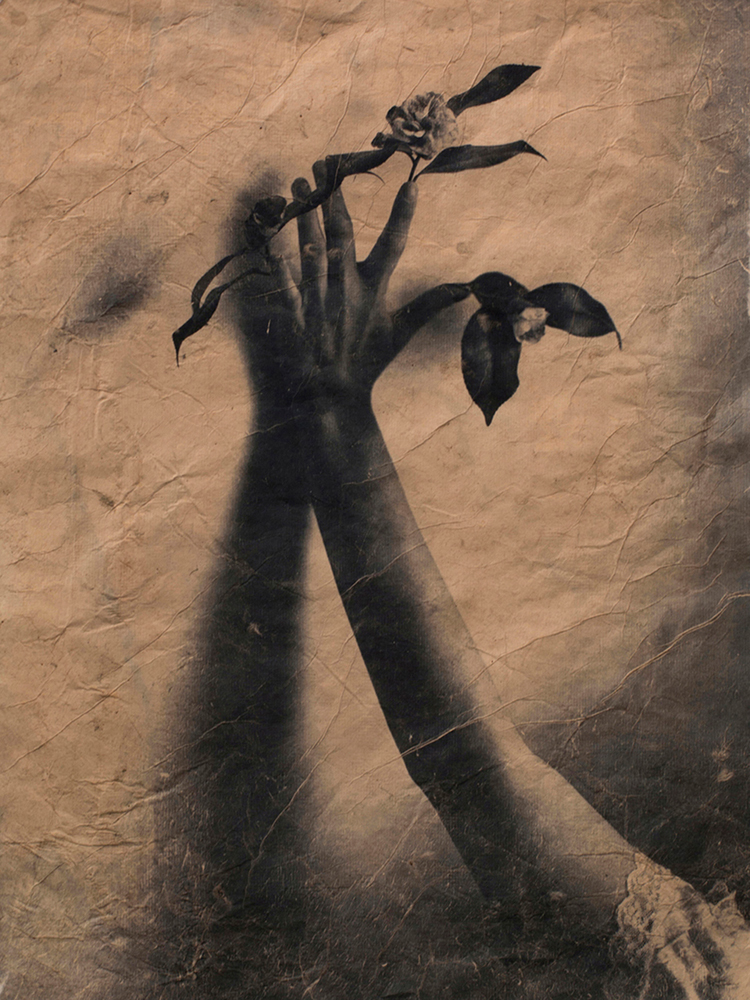 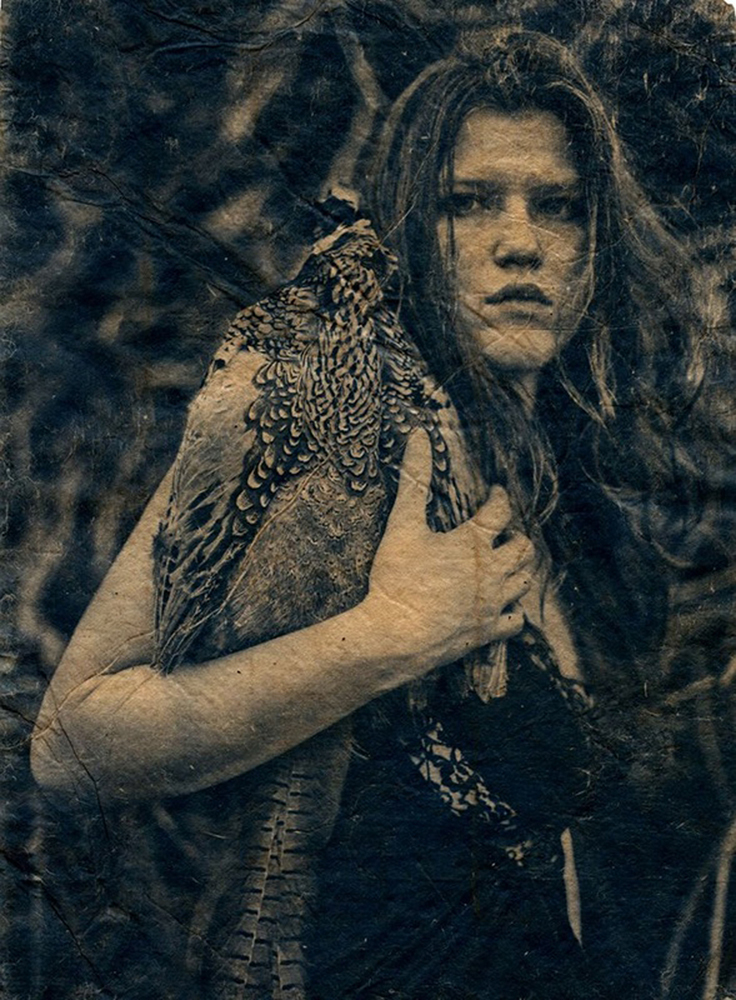 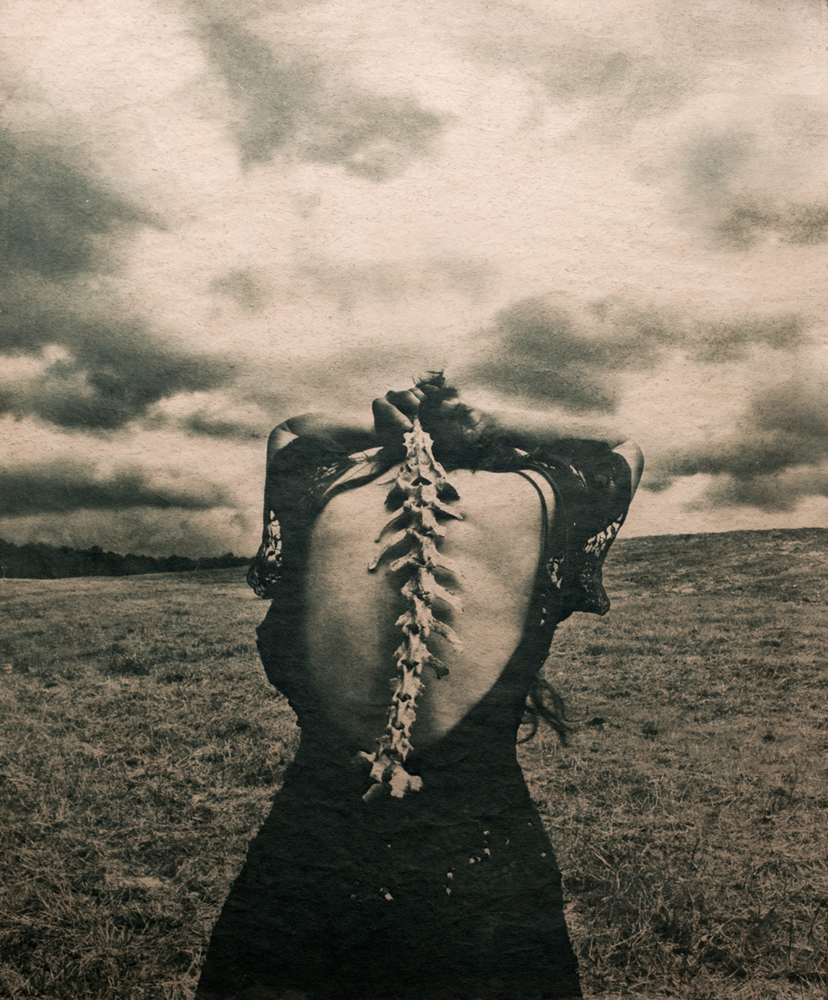 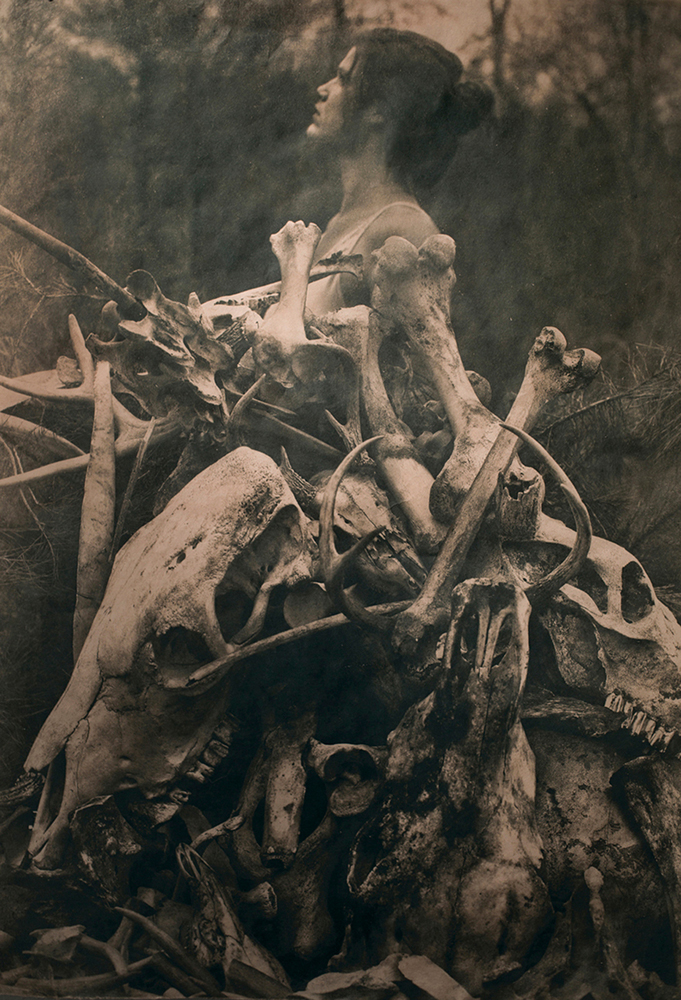 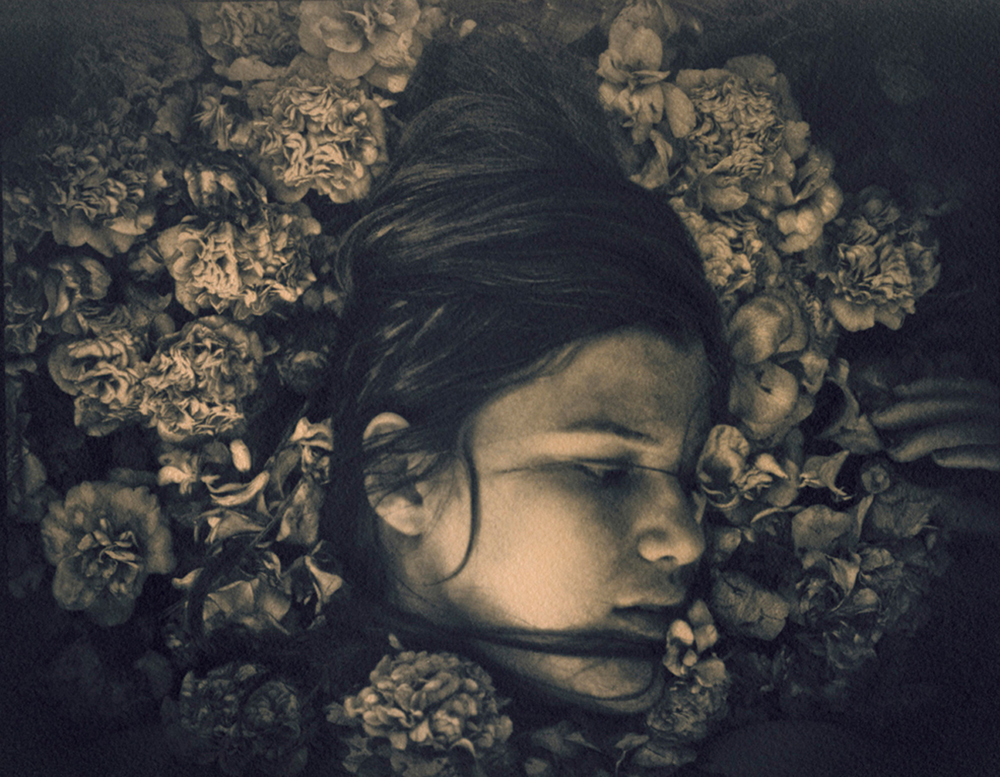 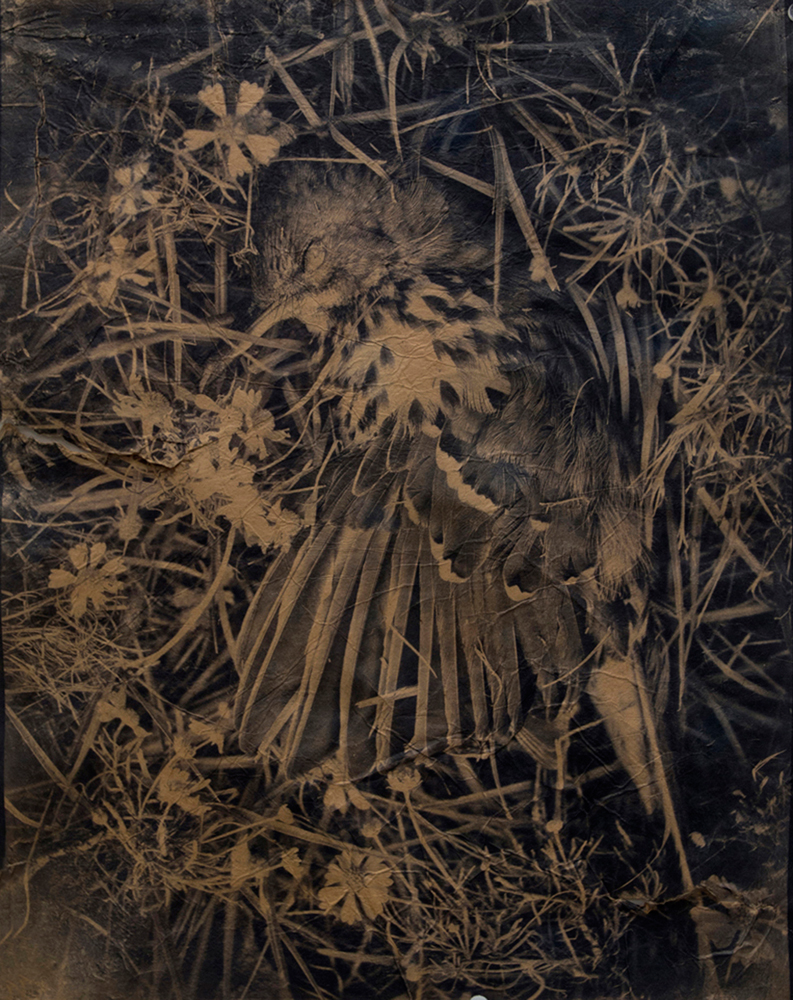 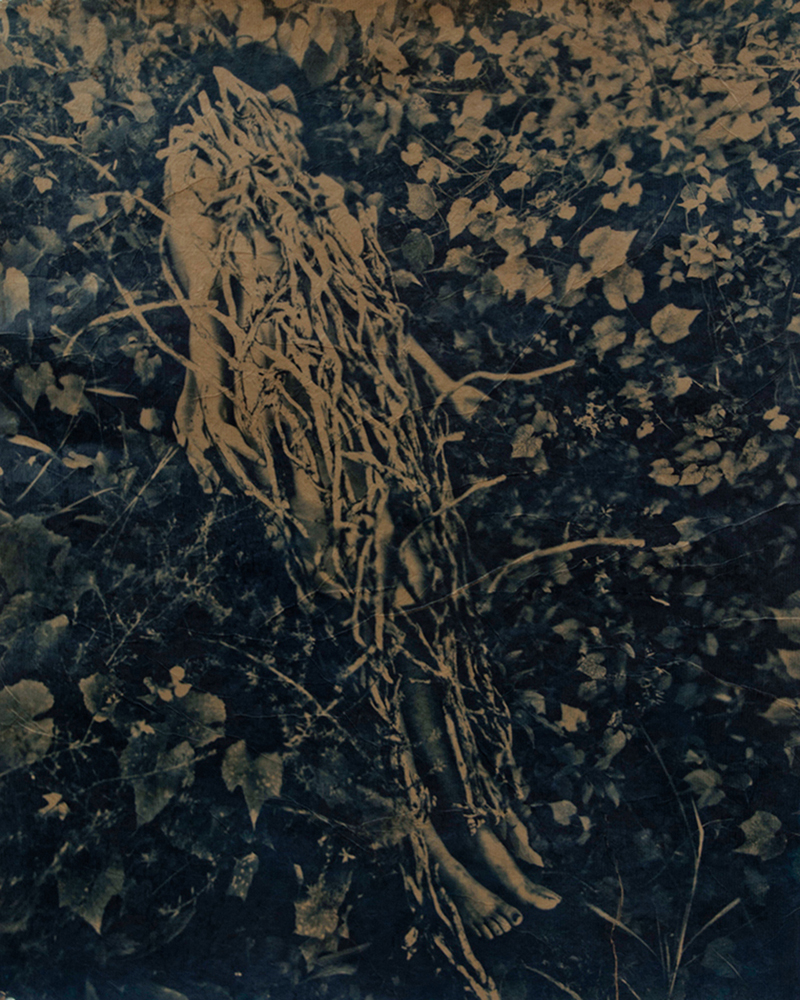