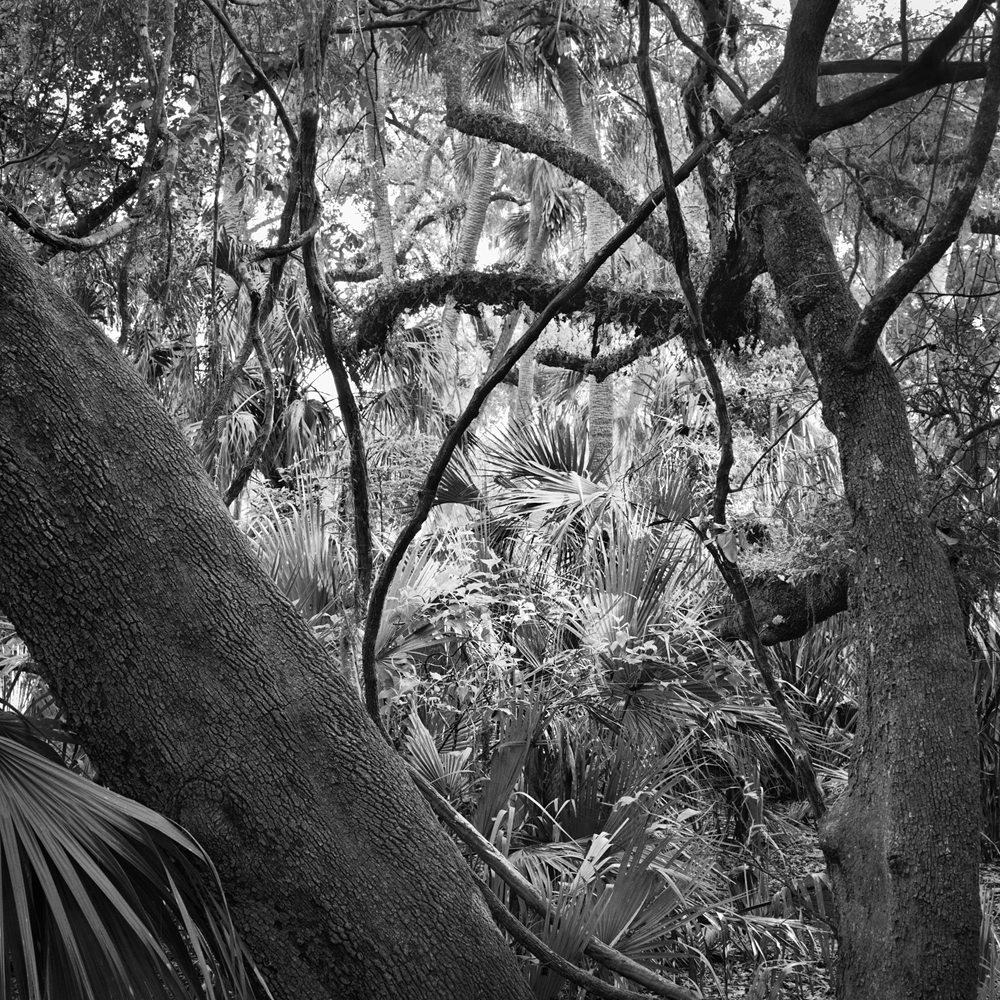 Benjamin Dimmitt was born and raised on the Gulf Coast of Florida. His passion for his native landscape continues to shape his photographic explorations. His Primitive Florida project, begun in 2004, investigates the mysterious primeval beauty of pristine Florida through black and white silver gelatin prints. Recently, Dimmitt observed the slow creeping death of the Chassahowitzka Wildlife Refuge’s vegetation from saltwater intrusion and the arrival of large algae blooms. He began to take another look at the ruined landscape and make a visual comparison to what was once Primitive Florida. It was with sadness and hesitation that Dimmitt began his more recent project, An Unflinching Look. In an exhibition this month (that runs through the end of October) at the Southeast Center for Photography in Greenville, South Carolina, Dimmitt exhibits both projects as Paradise. Lost. His photographs have been selected by Alison Nordstrom to illustrate a Water issue of the Journal of Florida Studies later this fall and he is a finalist in the 2017 Critical Mass. An interview with Benjamin follows. 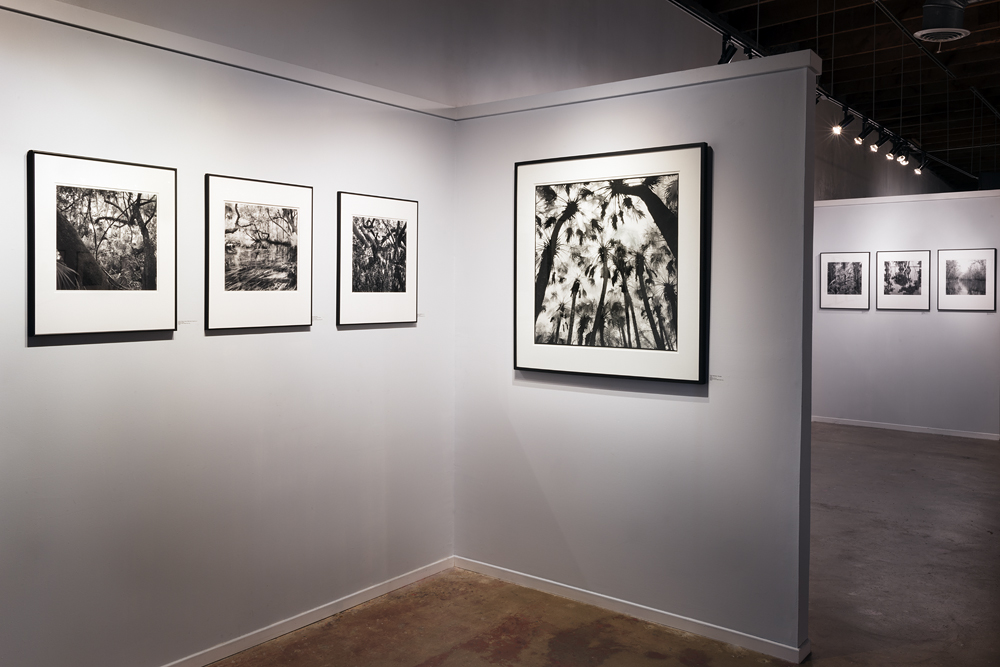 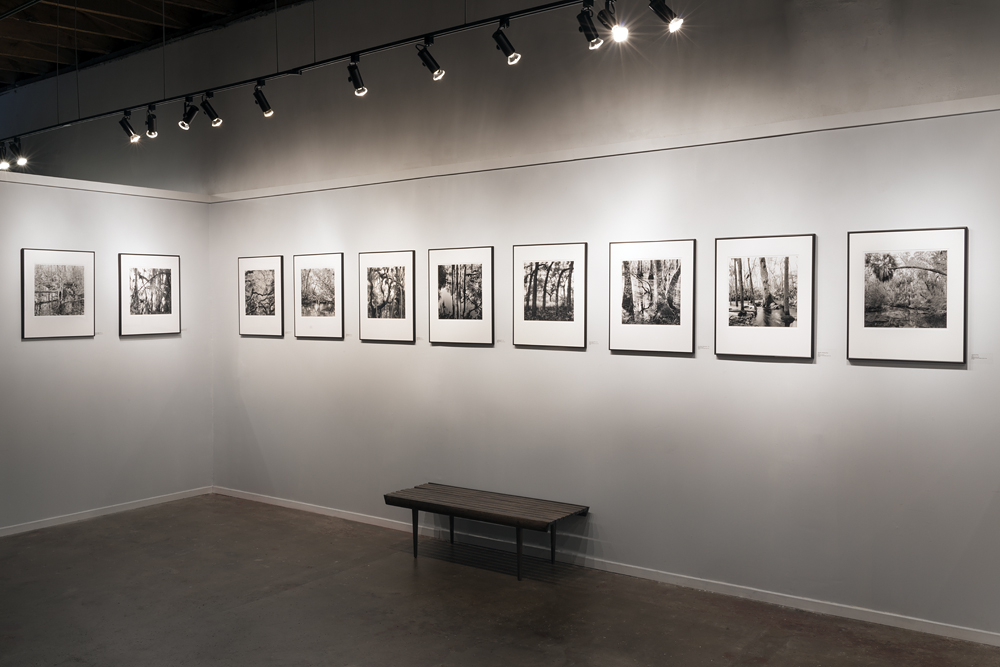 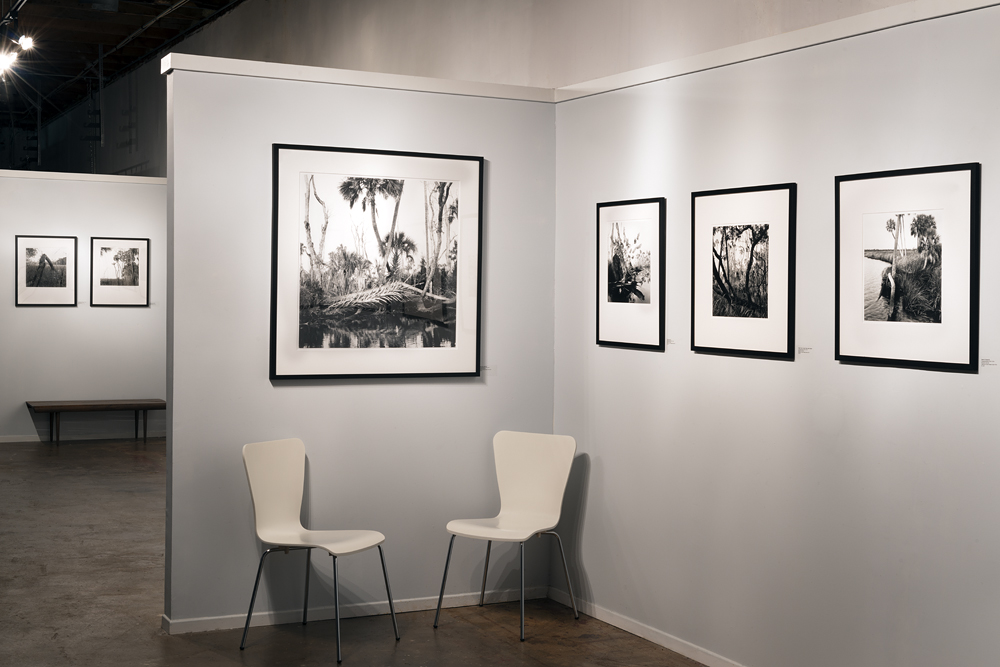 Benjamin Dimmitt was born and raised on the Gulf coast of Florida. He graduated from Eckerd College in St. Petersburg, FL and also studied at the International Center of Photography in NYC, NY, Santa Fe Photographic Workshop in Santa Fe, NM, Santa Reparata Graphic Arts Centre in Florence, Italy and City and Guild Arts School in London, England. Benjamin moved to New York City after college and held an adjunct professor position at the International Center of Photography from 2001-2013. He now lives and works in Asheville, NC and teaches workshops throughout the Southeast.

His work is represented by Clayton Galleries in Tampa, FL and is in the collection of the Museum of Fine Arts, Houston, the American Academy of Arts and Letters, the Florida Museum of Photographic Arts and Eckerd College among many others. Ain’t Bad, Architectural Digest, Black & White, Lenscratch, Oxford American, Orion, Photo District News, The New Yorker Photo Booth and others have featured Benjamin’s photographs. He is a finalist in Photolucida’s 2017 Critical Mass Award and was a finalist in 2014, also. 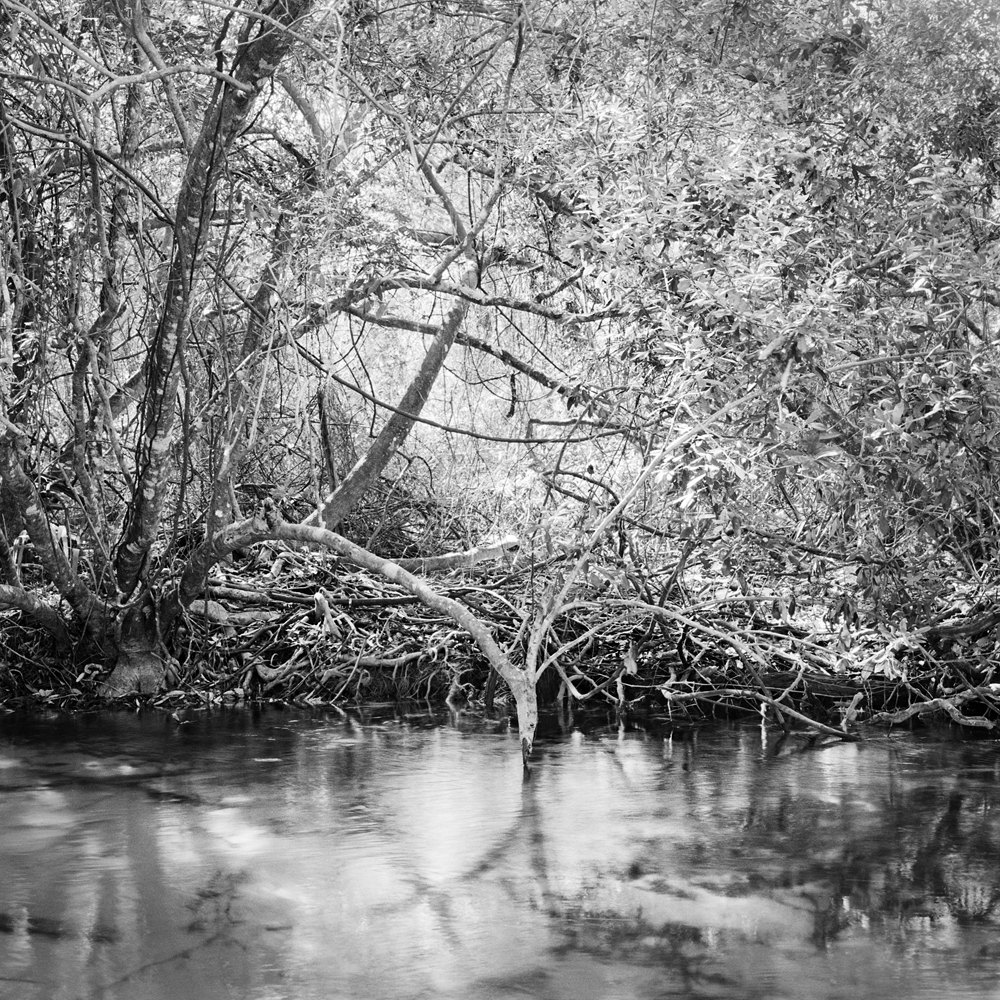 The Florida of my youth had abundant unspoiled areas that I took for granted and that have since vanished. Florida is now our third most populous state with 1,000 people a day moving there. The remaining wilderness has been put at risk by rising seas, unfettered growth and irresponsible resource management.

In 2004, I began photographing the wetlands, palm hammocks and low-lying forests of Florida in a process of exploring and interpreting the unique and fragile landscapes there. I am attracted to lush and fecund places where land merges with water to photograph as this is, for me, the primary and essential Florida.

One of my favorite places to photograph for this project is the spring-fed estuary of the Chassahowitzka National Wildlife Refuge on Florida’s Gulf Coast. Its dense palm hammocks and hardwood forests were festooned with ferns and orchids and the fresh water creeks were a clear azure. I was enchanted by the primeval beauty of Chassahowitzka on my first visit over 30 years ago and have photographed there extensively.

Unfortunately, saltwater began creeping up into the creeks there about 6 years ago. Rising sea levels due to climate change were partially the cause. However, the saltwater intrusion was accelerated when the Gov. Rick Scott-appointed state water commissioners, whose primary purpose is to protect the state’s water resources, determined that the wetlands could survive with less fresh water. This new minimum flow allows the state to increase the pumping of fresh water for large-scale inland developments and agricultural interests. The drawdown of fresh water for these wealthy lobbyists has taken fresh water away from the aquifer that feeds the Chassahowitzka’s springs and many others nearby. As the fresh water flow in the estuaries has decreased, saltwater has moved upstream and taken its place. What had been verdant, semi-tropical wetlands is now mostly an open plain of grasses relieved by palms and dying hardwood trees. Recently, large algae blooms have begun appearing in the creeks.

When the saltwater intrusion began, my initial response was to turn my back on the devastation and canoe upriver towards the springs to photograph where the saltwater hadn’t reached. In 2014, I began to photograph in the salt-damaged sawgrass savannas and spring creeks as a way of reckoning with the ecosystem loss and of understanding what is becoming of Florida.
This ruin is the fate of estuaries around the world as sea levels rise. With fierce storms increasing and extensive flooding along coastal areas, we are reminded that climate change is a very real priority and that the greed and shortsightedness of politicians and developers have put a great many at risk.

Many thanks go to Michael Pannier of the Southeast Center for Photography for suggesting that these two bodies of work be shown together and for providing me with the opportunity to do so for the first time. – Benjamin Dimmitt 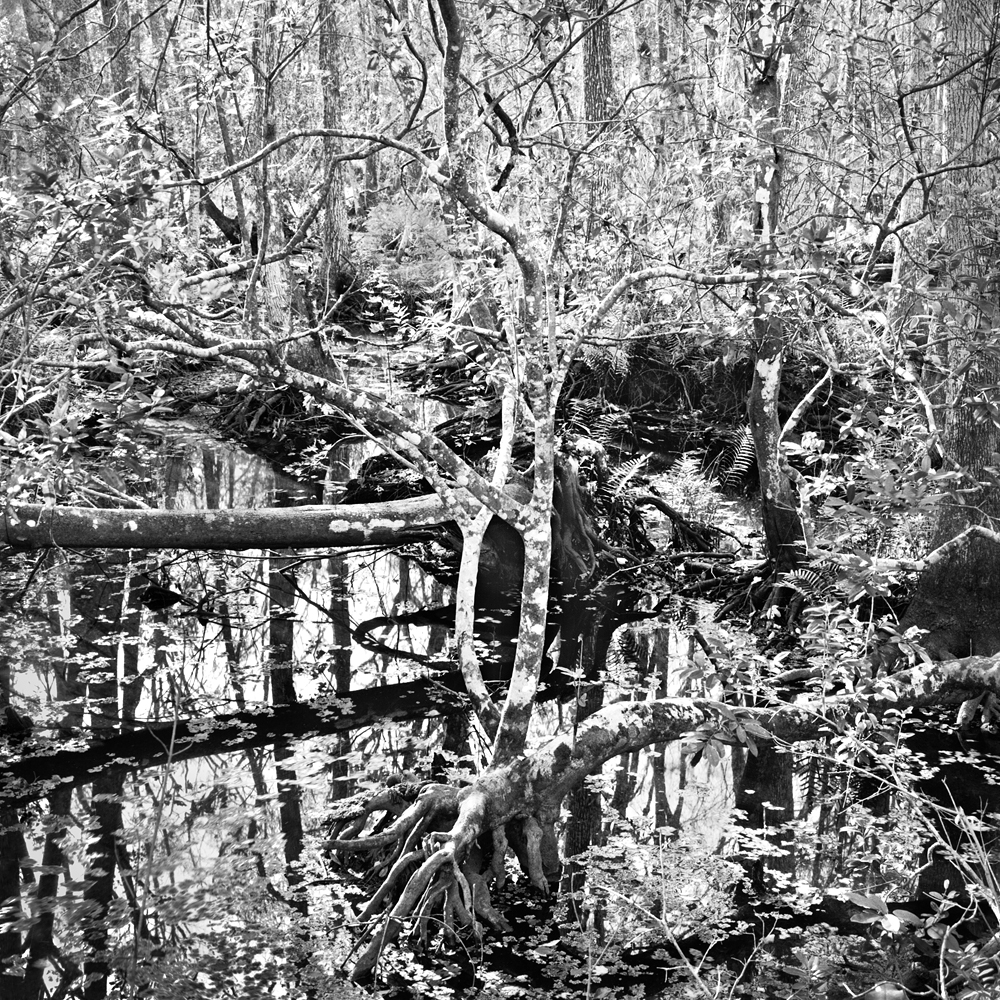 How did Paradise. Lost. begin?

This exhibit is the result of two projects. I began photographing Primitive Florida in 2004 as an investigation of the state’s wetlands and low-lying areas, the primary and essential Florida of my youth. In 2014, I started photographing An Unflinching Look when I realized how different the Chassahowitzka had began to look. I ignored it at first but started to photograph what I had avoided as the landscape looked more unhealthy by the year. I began photographing the salt-damaged sawgrass savannas and spring creeks as a way of reckoning with the loss and of trying to understand what has become of Florida. Paradise. Lost. is the culmination of both these projects. One grew out of the other. 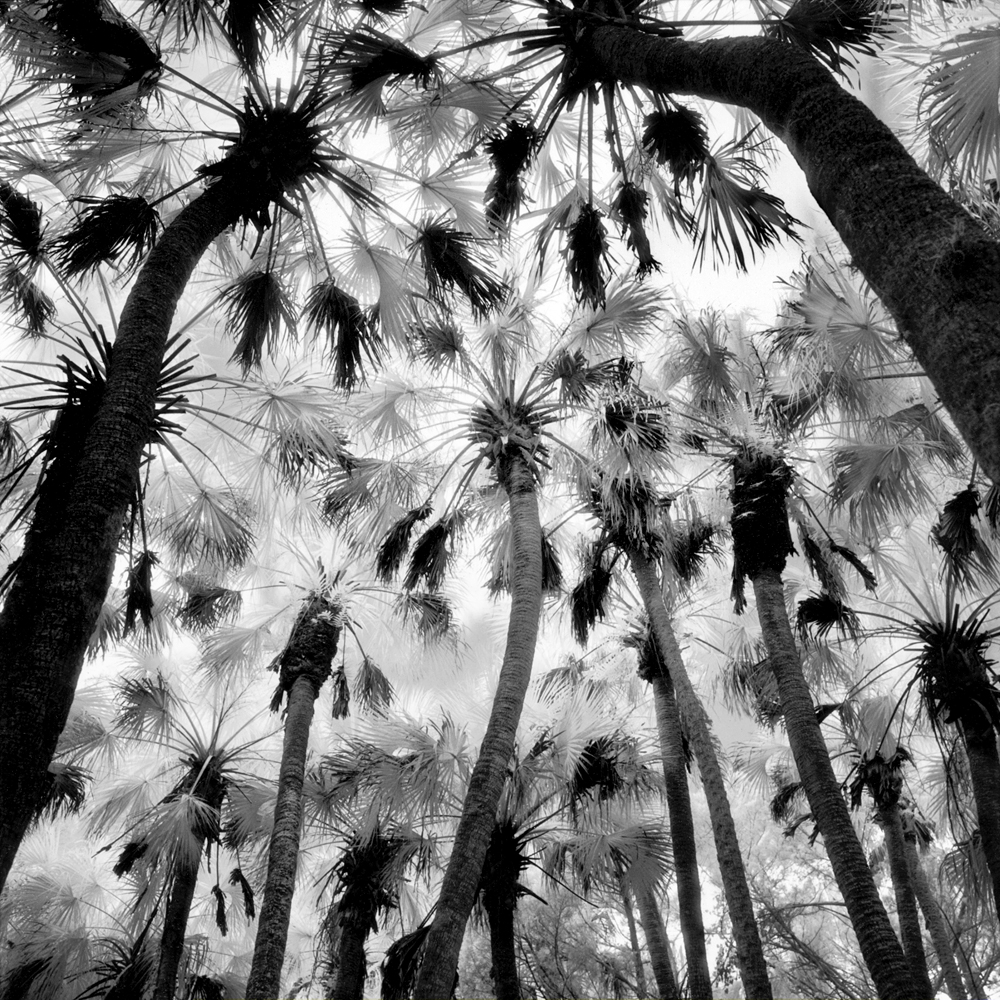 When you noticed the difference in the landscape, did you begin to research what was happening?

I did months of research. Among other things, I found out that Florida’s governor, Rick Scott, had appointed pro-development members to the state water management boards and that the state had fired scientists in the name of cutbacks. I made phone calls to university and state employees who were reluctant to discuss the issue. The state determined that the upper gulf coast wetlands could survive with less fresh water so they started pumping water from the aquifer for large-scale inland developments and agricultural interests. Now, with less fresh water flow, the creeks are becoming saltier and that’s what is killing so much of the plant life. 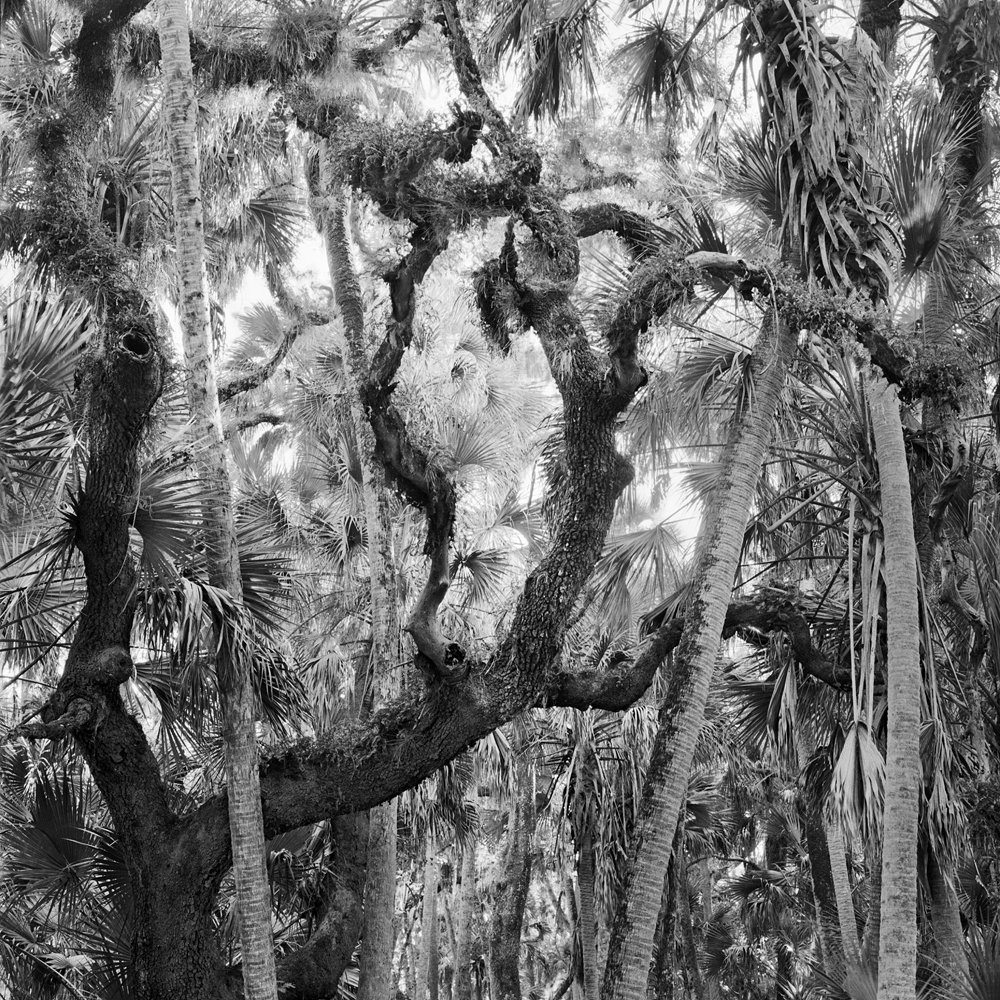 Did you find yourself photographing differently for An Unflinching Look?

Yes because I couldn’t access places as easily. In all my other work, I use a tripod, a cable release and the mirror lock-up on my Hasselblad and I am very deliberate about the images. With some of the saltwater intrusion work, I needed to use high-speed film so that I could handhold the camera and shoot from a drifting canoe. It was shooting from the gut, less controlled and kind of liberating. 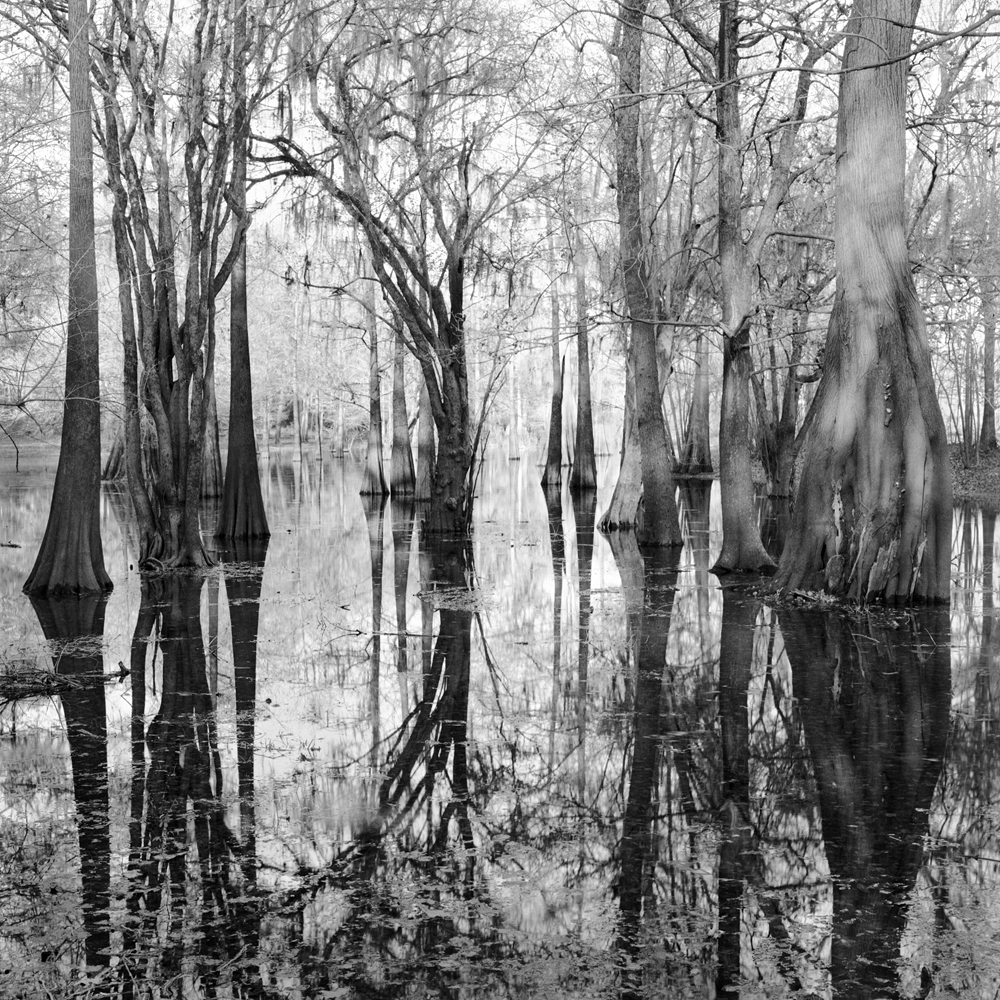 Do you consider yourself a documentarian?

I don’t think it matters. All photography is a document. The Primitive Florida project was different, more exploratory and aesthetically driven. Photographing An Unflinching Look has been painful, like photographing death as evidence or photographing a massive murder scene. Call it what you like, I’m not opposed to it being considered a documentary project. 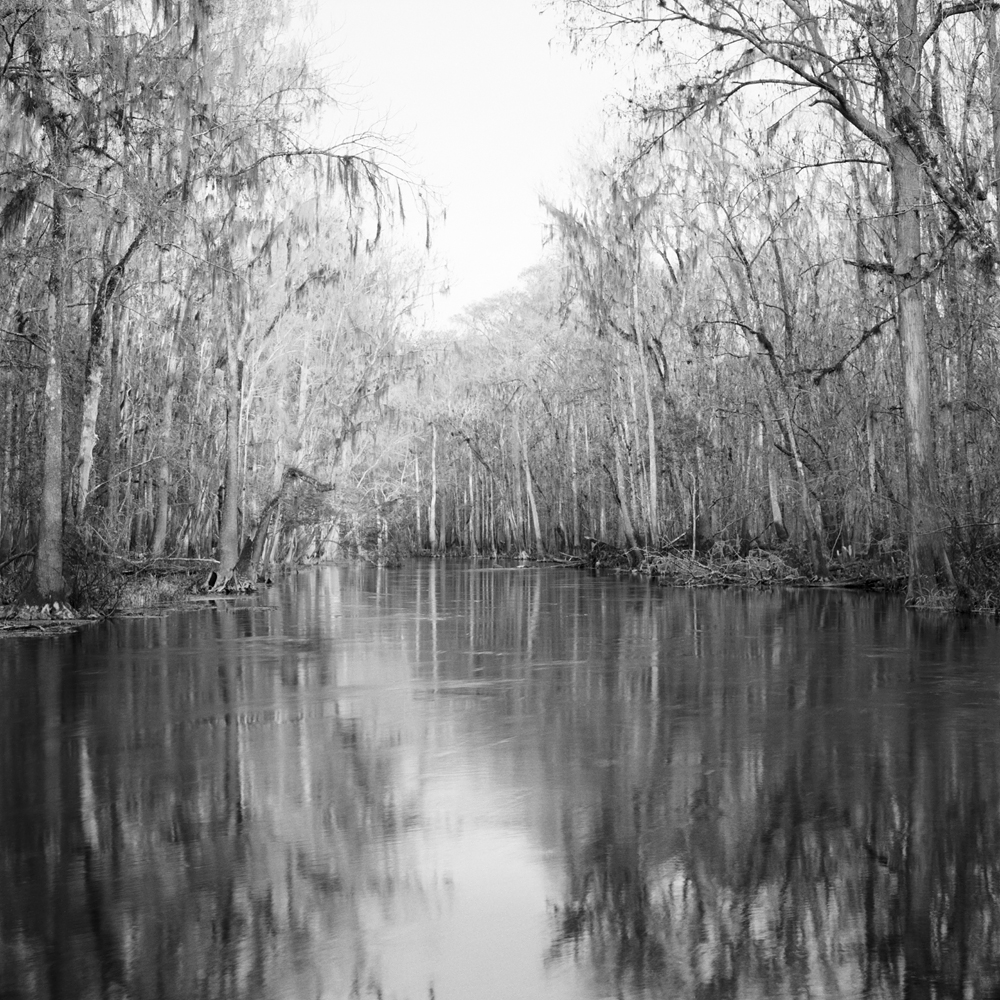 Although Unflinching Look is about the horrific change of the landscape, the images are still aesthetically pleasing to the eye. Is it okay to make something ugly into something beautiful?

I don’t have a problem turning something awful into beauty. This isn’t a new path. Robert Adams, Emmit Gowin, Richard Misrach, Edward Burtynsky and many others have made beautiful and compelling photographs of man’s destruction of the landscape. I didn’t put on a new hat; I’m still photographing with the same sensibility. This project would have been much easier if I had done it digitally but I wanted it to be a continuum. I made a conscious choice to use the same tools as my other work. It’s more truthful using film. Working in black and white is a more direct and simplified way of seeing. 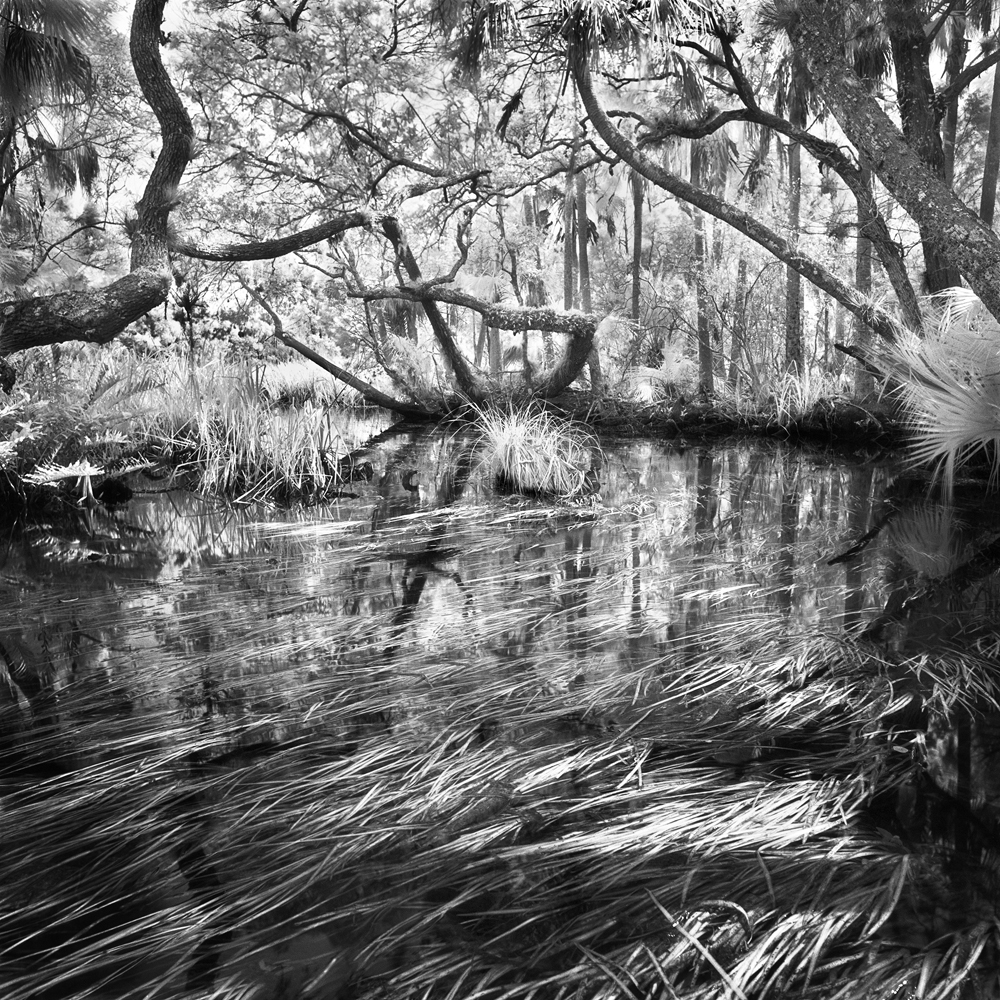 Where will you go from here?

I’m going down to Florida again in December to continue fleshing out more of the “before and after” photographs. Since Hurricane Irma, many more trees are down and the creeks will be difficult to navigate. One creek that I’d like to re-photograph has slowed to a trickle. I’m not even sure if I can go there anymore. 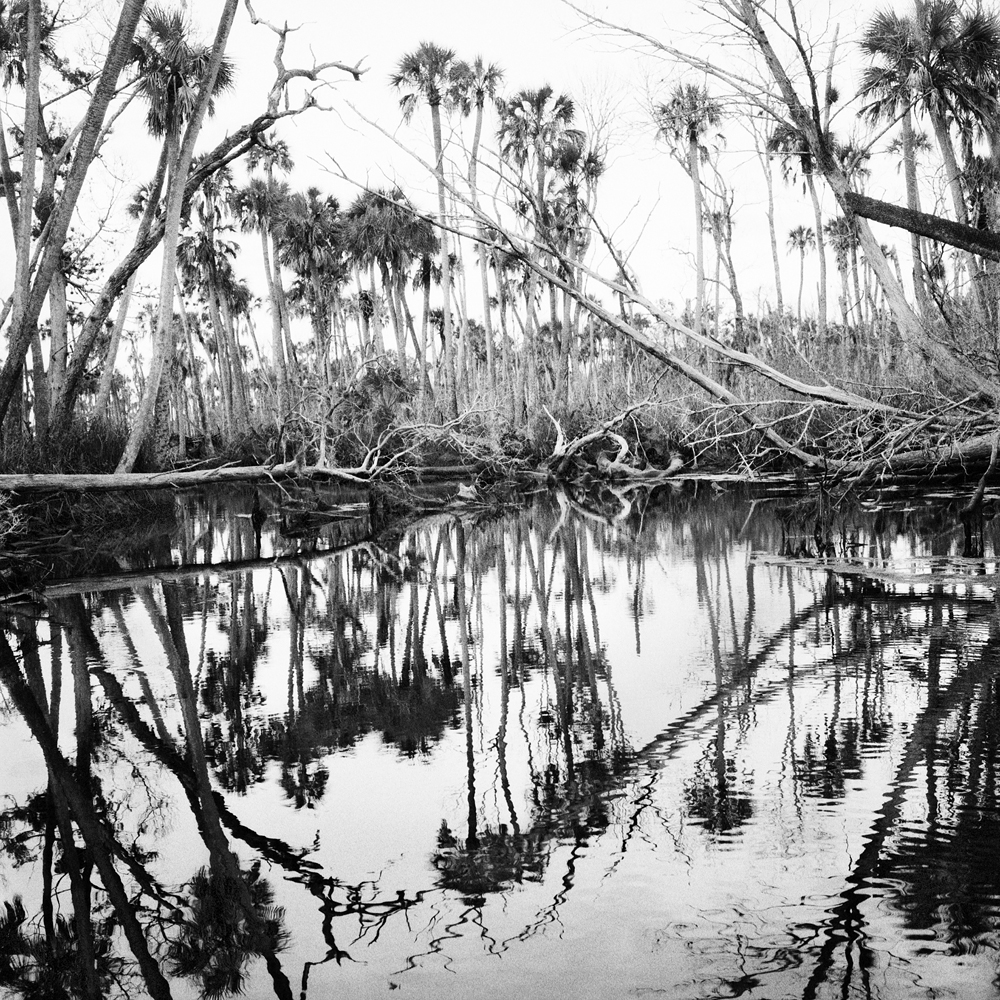 How do you see this project changing Florida?

Well, I’d like to find a publisher, maybe a university press to get the work out in the world. Of course, I’d include information from environmental writers and scientists. I’m also submitting the work to museums in Florida. There’s only so much impact that I alone can have. Overall, I think I have described what concerns me in a coherent way with Paradise. Lost. and that feels important. 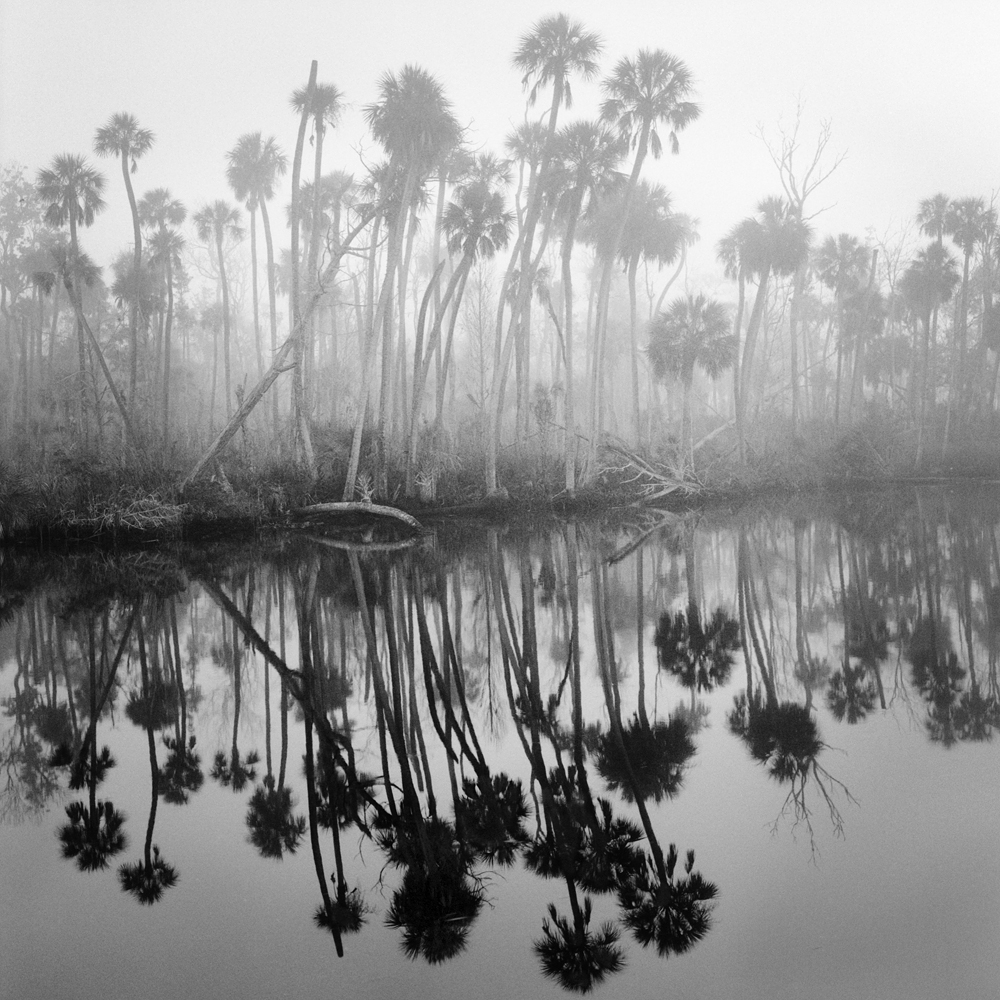 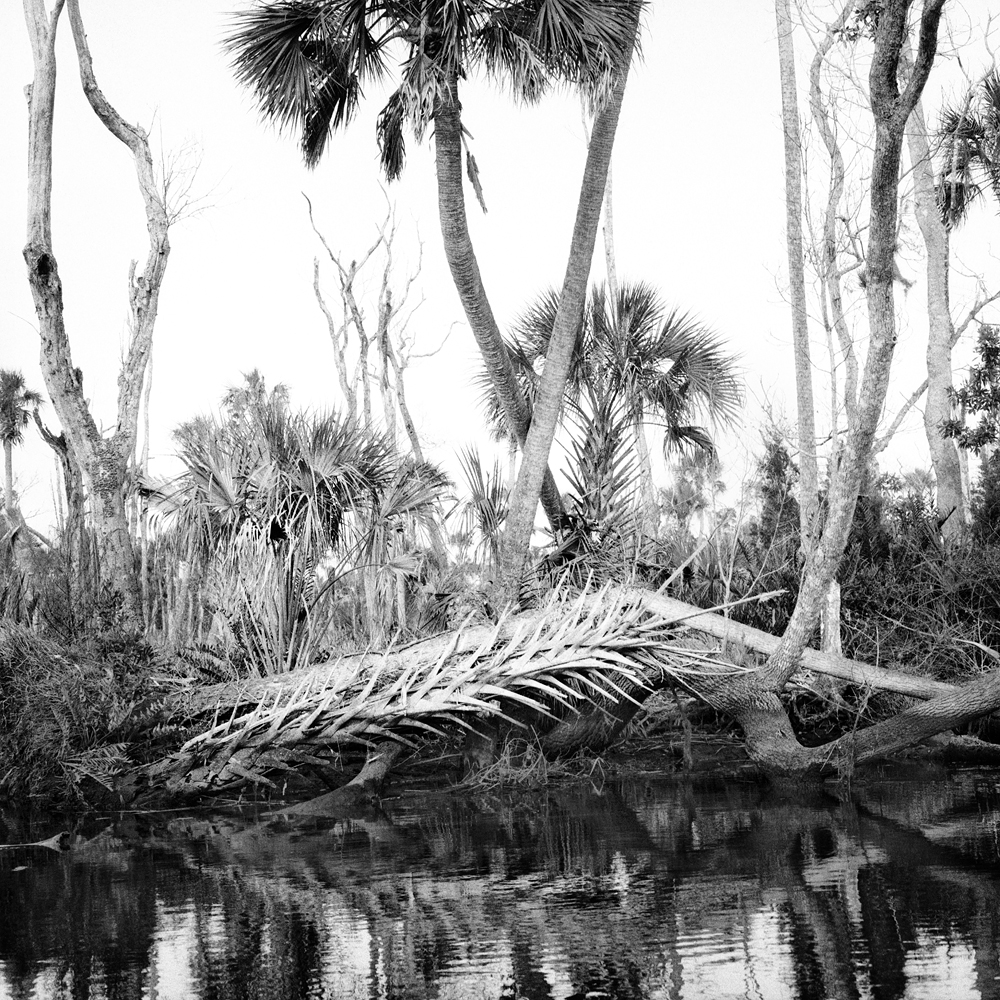 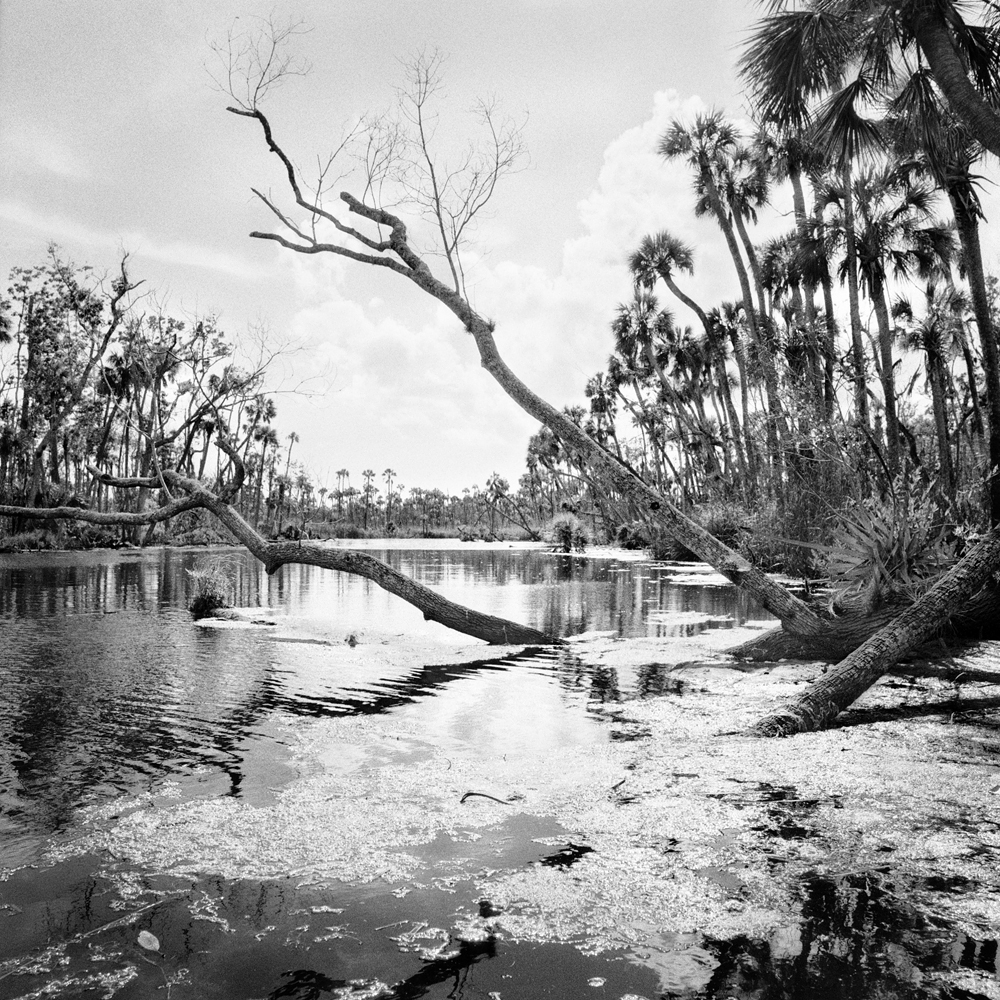 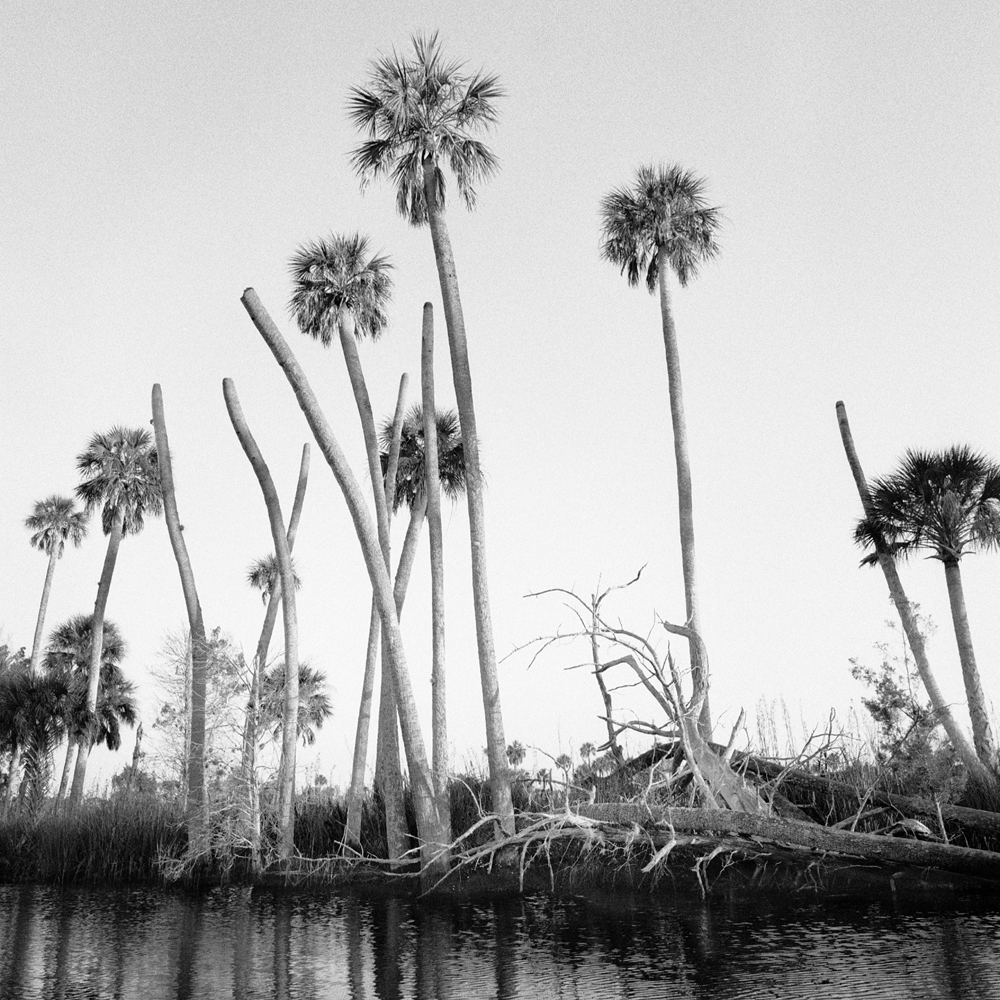 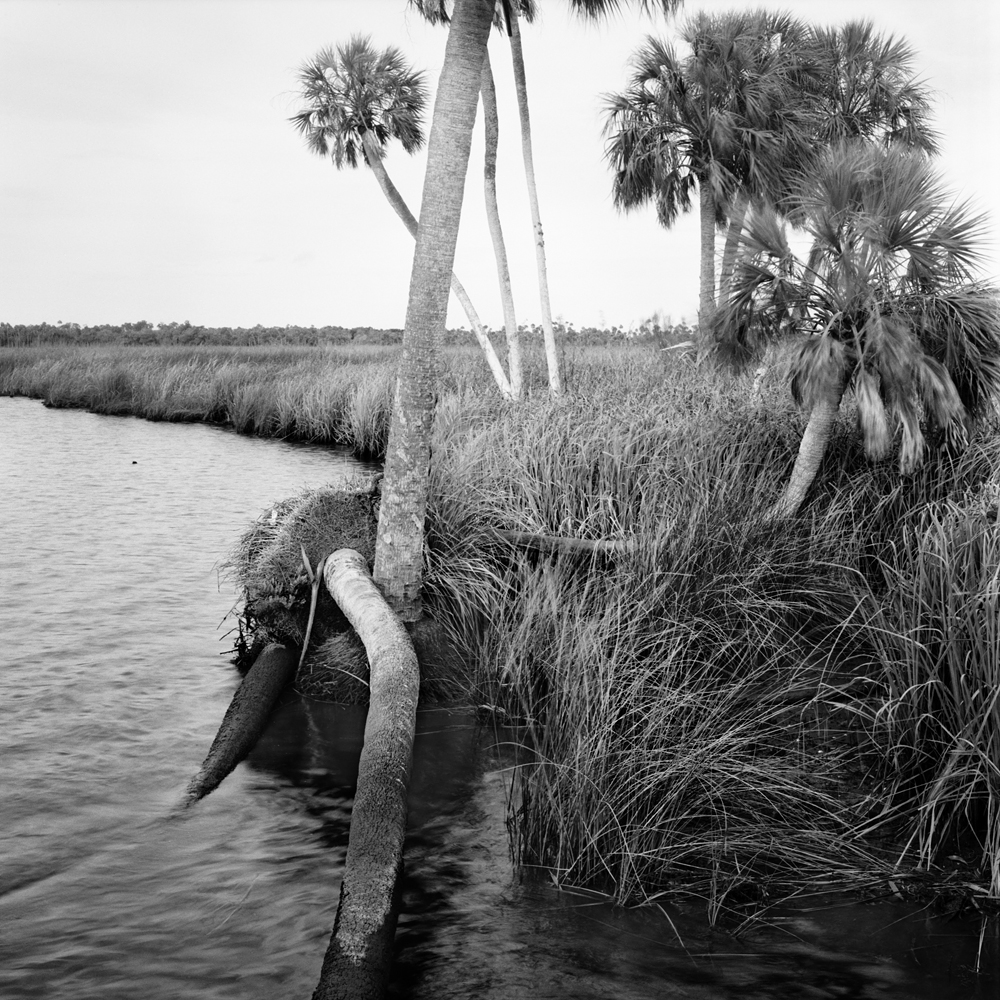 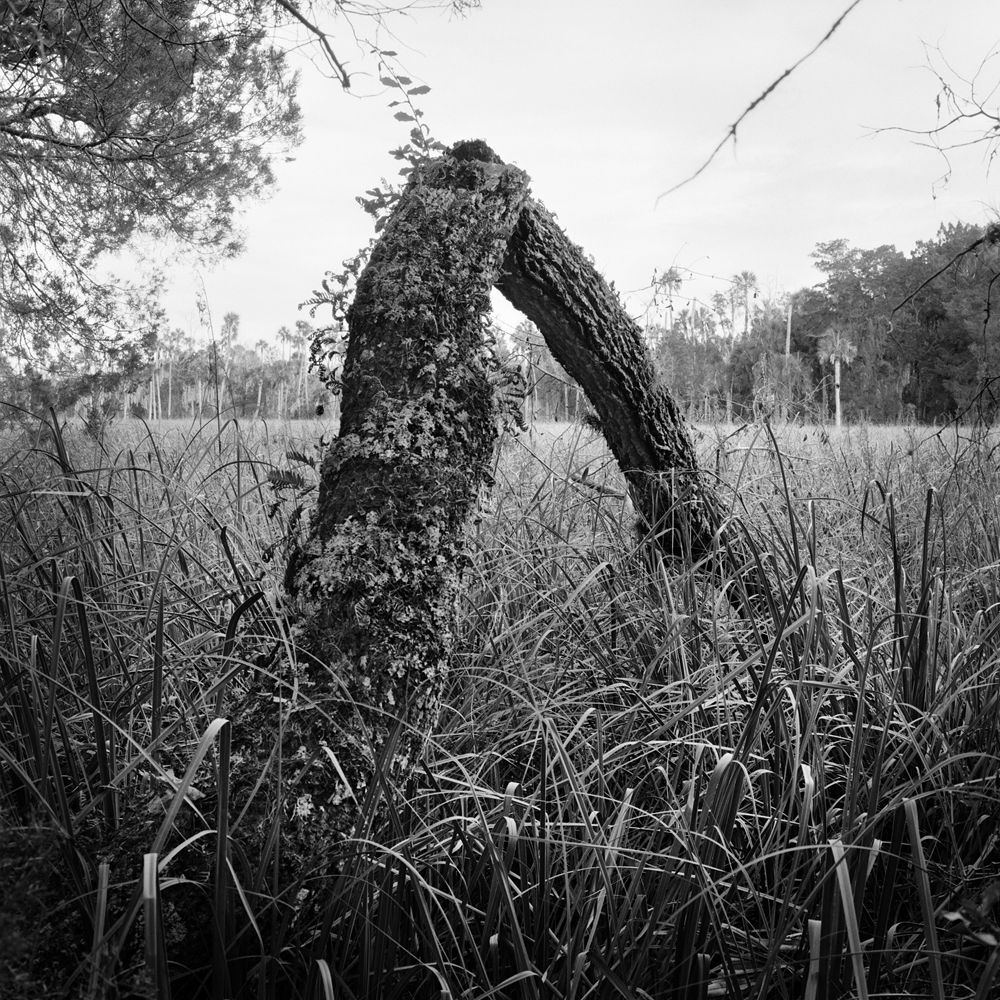