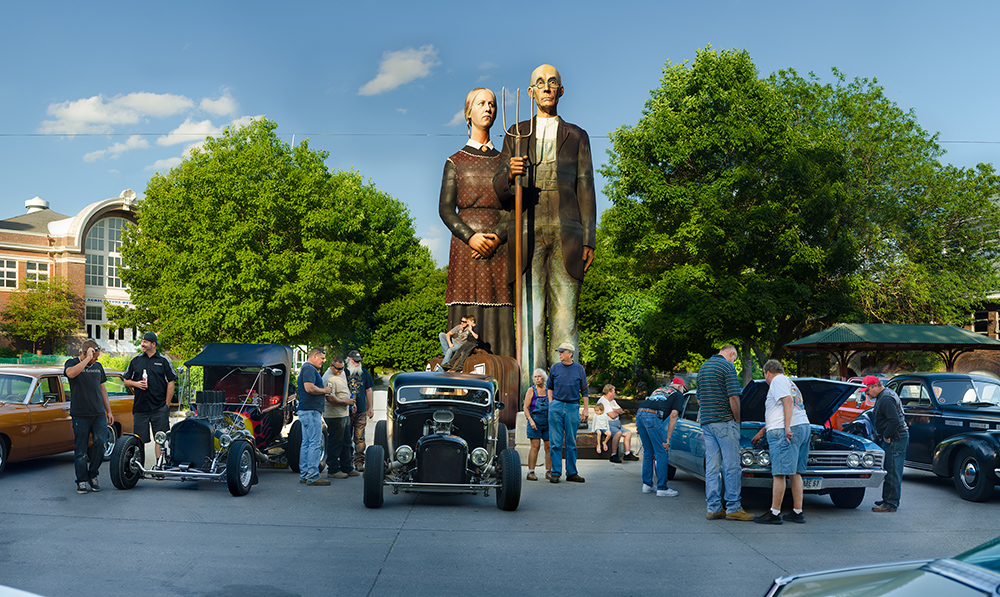 One of the highlights of this year’s Fotofest, was meeting photographer Rich Frishman. I had done a little research before we met, so I was excited to see his images that are comprised from “dozens to hundreds of photographs.” Each image is a  tableau of American culture, with a humorous nod to the quirky and eclectic icons of roadside kitsch. In exhibition the work is massive, each up to 4 feet tall and 8 feet wide. Rich was as engaging as his work, sharing wonderful stories about the places and people he had photographed. 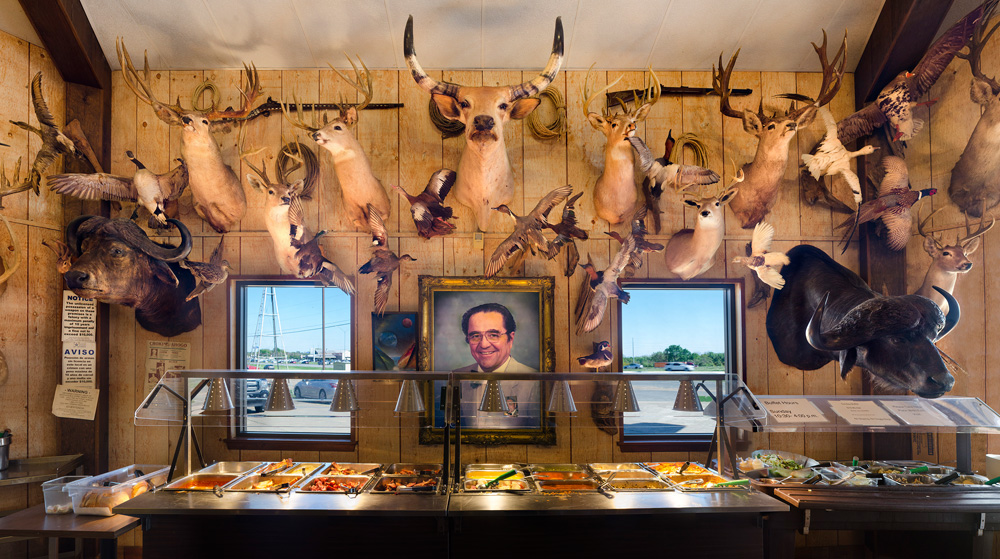 Born and raised in Chicago, Frishman began making photographs at age 5, when he was given a Kodak Brownie for his birthday. That simple gift sparked a lifetime passion. Photography became a language with which to explore and explain life. Studying with Reed Estabrook, Robbert Flick and Art Sinsabaugh, Frishman graduated from the University of Illinois with a BA in Communications. The highlight of his education was working at The Daily Illini, where his interest in documentary photography and photojournalism were nurtured.

Upon graduation, Frishman began working as a staff photographer for Pioneer Press, a chain of suburban weeklies outside Chicago. Four years later, after winning numerous awards in NPPA’s Pictures of the Year, he was recruited to join the staff at The Everett Herald, a daily newspaper near Seattle. Working with such legendary picture editors and designers as Rich Shulman, David Griffin and Bill Marr, he learned from these masters of journalism the art of picture stories.

Frishman left The Herald in 1984 to freelance for magazines and corporations, including LIFE, National Geographic, Sports Illustrated, Microsoft, Time, and numerous others. While traveling widely for these clients, he became interested in how the local landscape reflected the local culture. Eventually he became more interested in photographing places than people. This has led to numerous gallery shows and museum acquisitions.

Frishman specializes in magnificently detailed immersive large-format prints, constructed of hundreds of individual photographs that he meticulously blends together to create a single image. His current project, “American Splendor,” explores the cultural landscape of the United States. These authentic scenes reflect Frishman’s background in photojournalism and his interest in history. Often there is a measure of irony, humor, or pathos in his choice of subject matter, but he primarily considers himself a visual archaeologist, documenting the future remains of a lost civilization.

Frishman lives with his family on an island outside Seattle, Washington.

All human landscape has cultural meaning. In American Splendor, I am engaged in exploring the vernacular landscape of the United States. I imagine myself an archaeologist documenting the future remains of a lost civilization, filled with remnants of the sublime and mundane.

Our built environment is society’s autobiography writ large. Because we rarely consider our edifices as evidence of our priorities, beliefs and desires, the testimony our landscape tells is perhaps more honest than anything we might intentionally present.

I love cramming minute detail into these constructed photographic images, to make them immersive and engaging, because that is how I experience life. These images, all real and authentic, generally appear to be single moments, perhaps a thousandth of a second in duration. They are not.

Reality is more complex than a single moment can reveal. We each create our own personal tapestries of memory by assembling a myriad of individual threads: the smell of French fries, the sound of conversation, the sight of dappled colors. Similarly, I create my images from many discrete photographs, weaving them together to form a single image. The complexity of these composites is not always obvious.

Each of these photographs is constructed of between dozens and hundreds of photographs. The resulting images are designed to be printed on a monumental scale to heighten the immersive quality and reveal otherwise hidden details. Some of these scenes are shot over an afternoon. Some are shot over several hours, some over several years.

Growing up in Chicago, the son of a builder and would-be architect who loved to drive, I learned first hand the beauty of road trips and the ephemeral glory of even the most mundane edifice. My Dad would point out Louis Sullivan buildings and hot dog stands, explaining in his own way what made each unique. He showed me the Garrick Theatre as it was being demolished and the Auditorium as it was being restored. He took me to see Mies van der Rohe’s Federal Center being built, and showed me the abundance of Frank Lloyd Wright’s genius. On his own construction jobs he salvaged terra cotta gargoyles that were destined for the dumpster, hung abandoned artifacts from Gold Coast mansions in our modest den, and made his bedroom headboards from massive oak spiral stair treads from the old Federal Building.

From this humble appreciation springs my own artistic interests, such as American Splendor. I consider these images as visual documentation of our American culture.

On the Persistence of Vision from Rich Frishman on Vimeo. 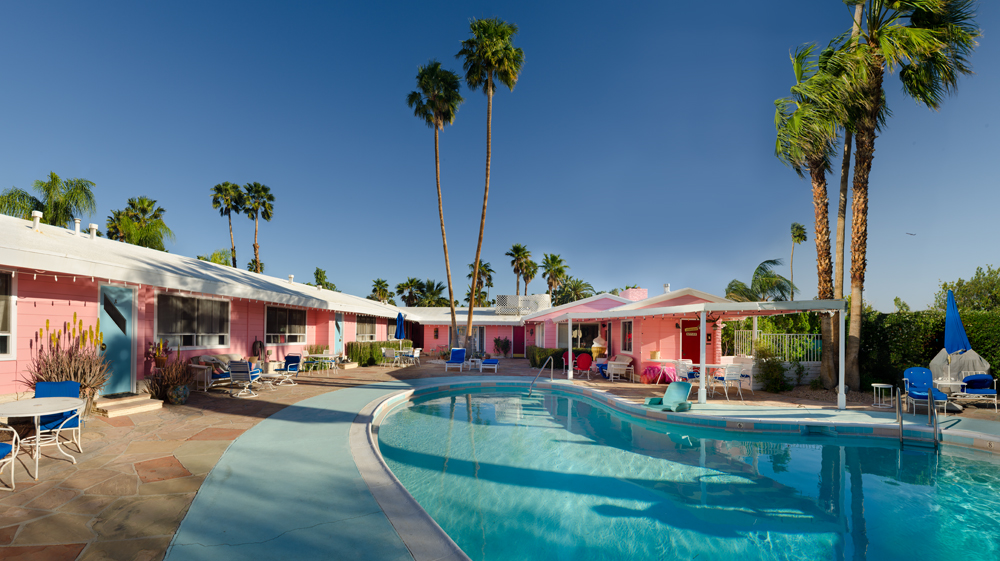 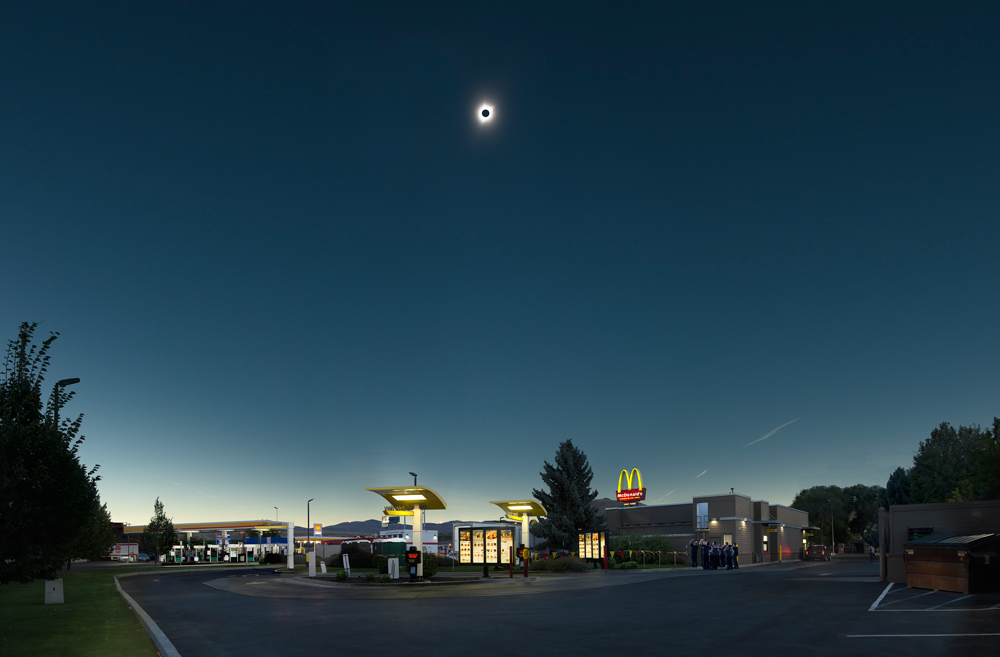 Total solar eclipse over McDonald’s; Baker City, Oregon. Celestial grandeur with a side of fries. I was reminded of Ansel Adams’ “Moonrise Over Hernandez.” ©Rich Frishman ALL RIGHTS RESERVED 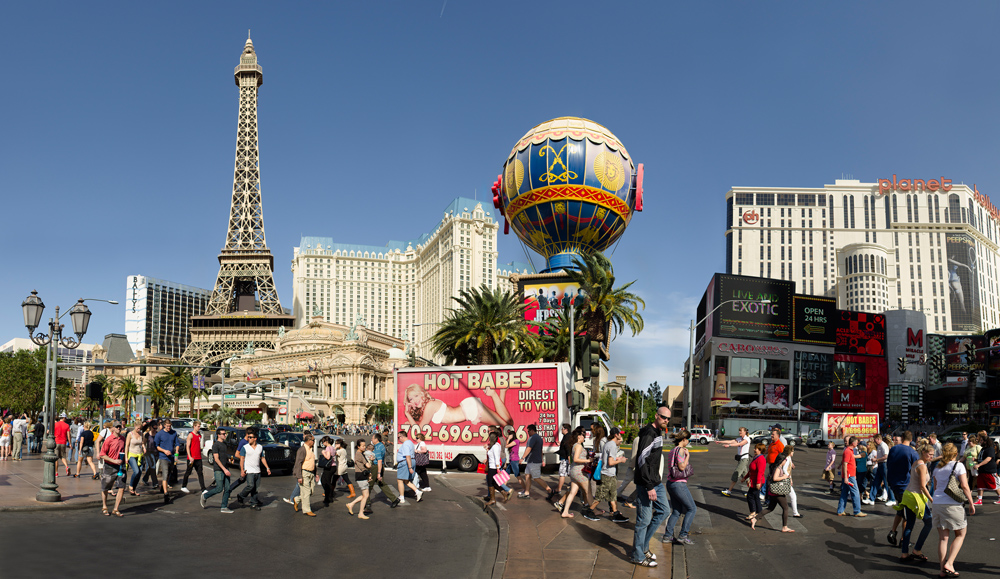 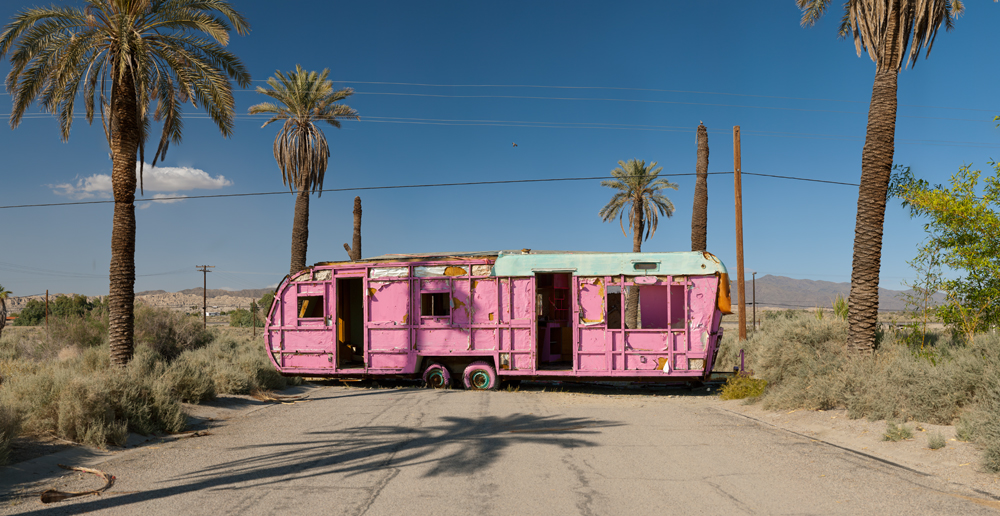 A brightly painted derelict trailer stands abandoned at the Salton Sea Marina on the east coast of the Salton Sea in Salton City. ©Rich Frishman / ALL RIGHTS RESERVED 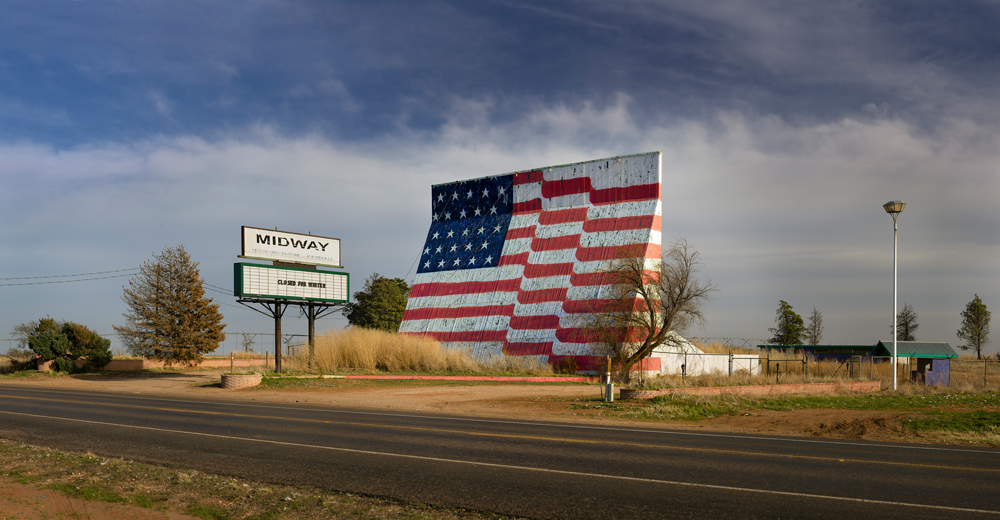 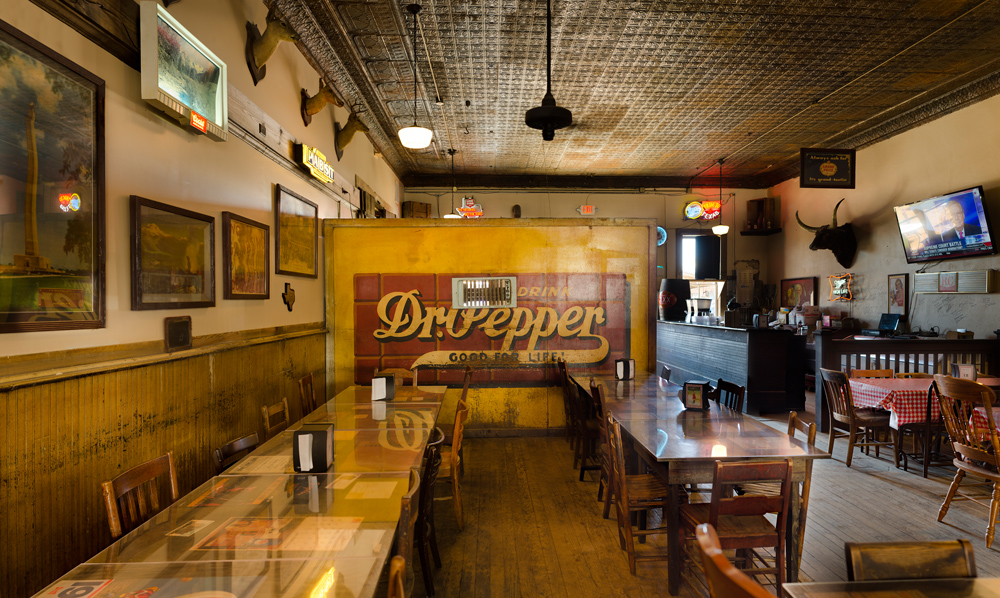 Segregation wall at Templin Saloon; Gonzales, Texas 2016 The wall was constructed in the early 20th Century and is decorated with an original pre-1929 Dr. Pepper logo. At the time of its construction (circa 1906) only Caucasian customers were allowed to sit in the front of the saloon. All Hispanic, Latino and African-American customers had to sit behind the wall. When the saloon was remodeled and re-opened in 2014 the wall, no longer used for its original purpose, was retained as a historical reminder. ©Rich Frishman ALL RIGHTS RESERVED

Stark’s Sporting Goods in Prairie du Chien, Wisconsin features an assortment of items, including boats, booze and bullets. One-stop shopping, American-style. This image is constructed of hundreds of individual pictures stitched together to create an accurate and highly-detailed photograph. This is part of my ongoing project, American Splendor, exploring our cultural landscape. ©Rich Frishman ALL RIGHTS RESERVED