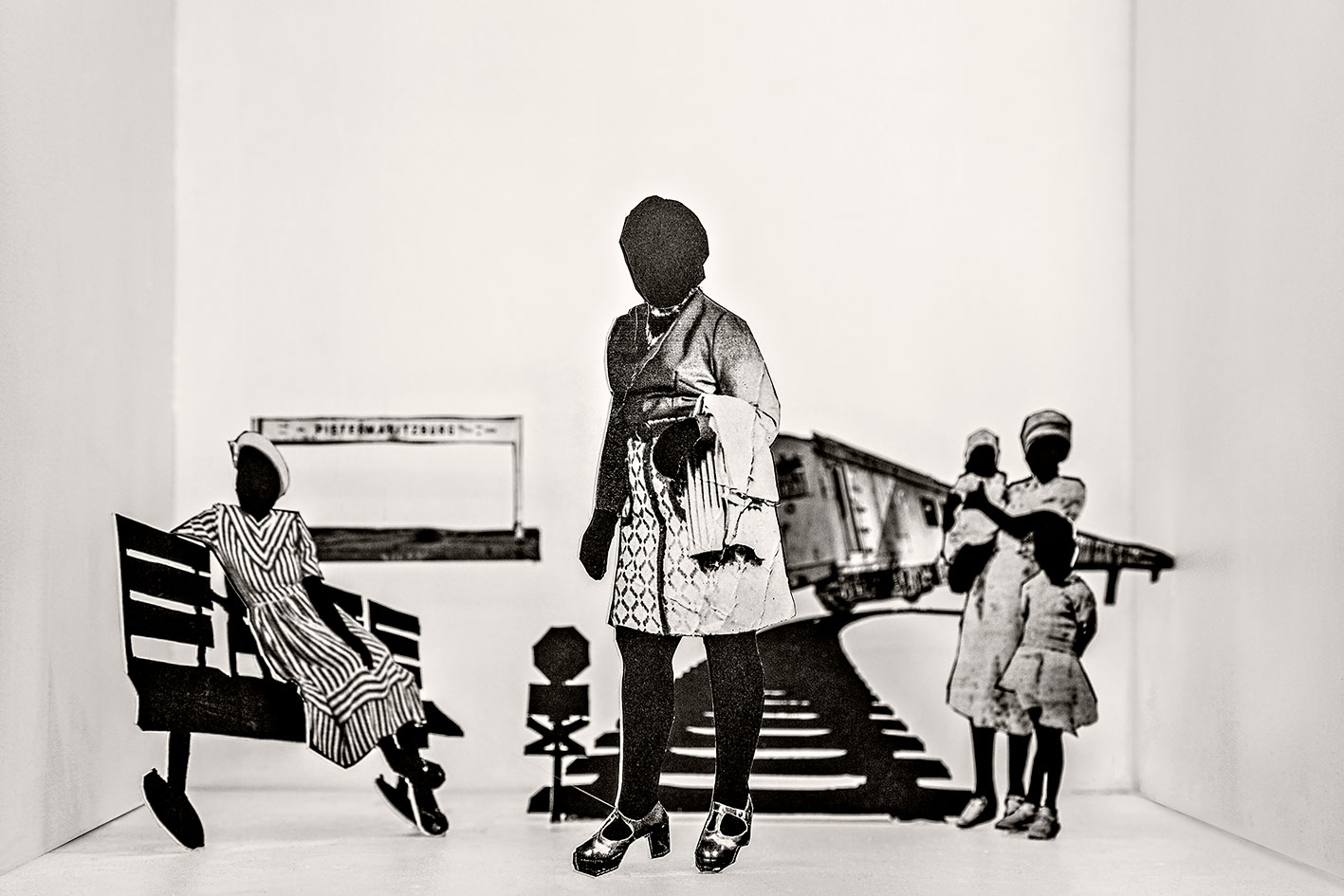 ©Lebohang Kganye, You couldn’t stop the train in time, 2018. From the series, “Tell Tale.” Inspired by “The train driver,” by Athol Fugard Inkjet print on cotton rag paper.

The Tell Tale series represents the most recent body of work from visual artist Lebohang Kganye. In this work, Kganye creates individual scenes based on three sources: passages from Athol Fugard’s play “Road to Mecca,” and Lauren Beukes’ novel Maverick, and oral interviews with residents of Nieu Bethesda, a small village at the foot of the Sneeuberg Mountains. The literary works explore the life of South African outsider artist, Helen Martins, who lived and worked in the rural Karoo town of Nieu Bethesda. Kganye weaves the three inputs into handmade, interpretive dioramas made up of figures in silhouette, pastoral settings, domestic interiors, and community spaces. Each scene has a title that evokes an adage or experience from Martins’ life. Paired together, the titles and images make the viewer unsure whether they are looking at a representation of a historical moment, a fictive experience, or recalled memory — or all of these things at the same time.

Tell Tale began as a commission as part of a collaborative initiative between the Market Photography Workshop and Market Theater in Johannesburg to explore the work of Athol Fugard. Kganye traveled to the small village of Nieu Bethesda — just over five hundred miles from Johannesburg — to conduct research for her series. She interviewed residents and gathered oral histories that echoed experiences and built upon the narrative of Helen Martins and her life. 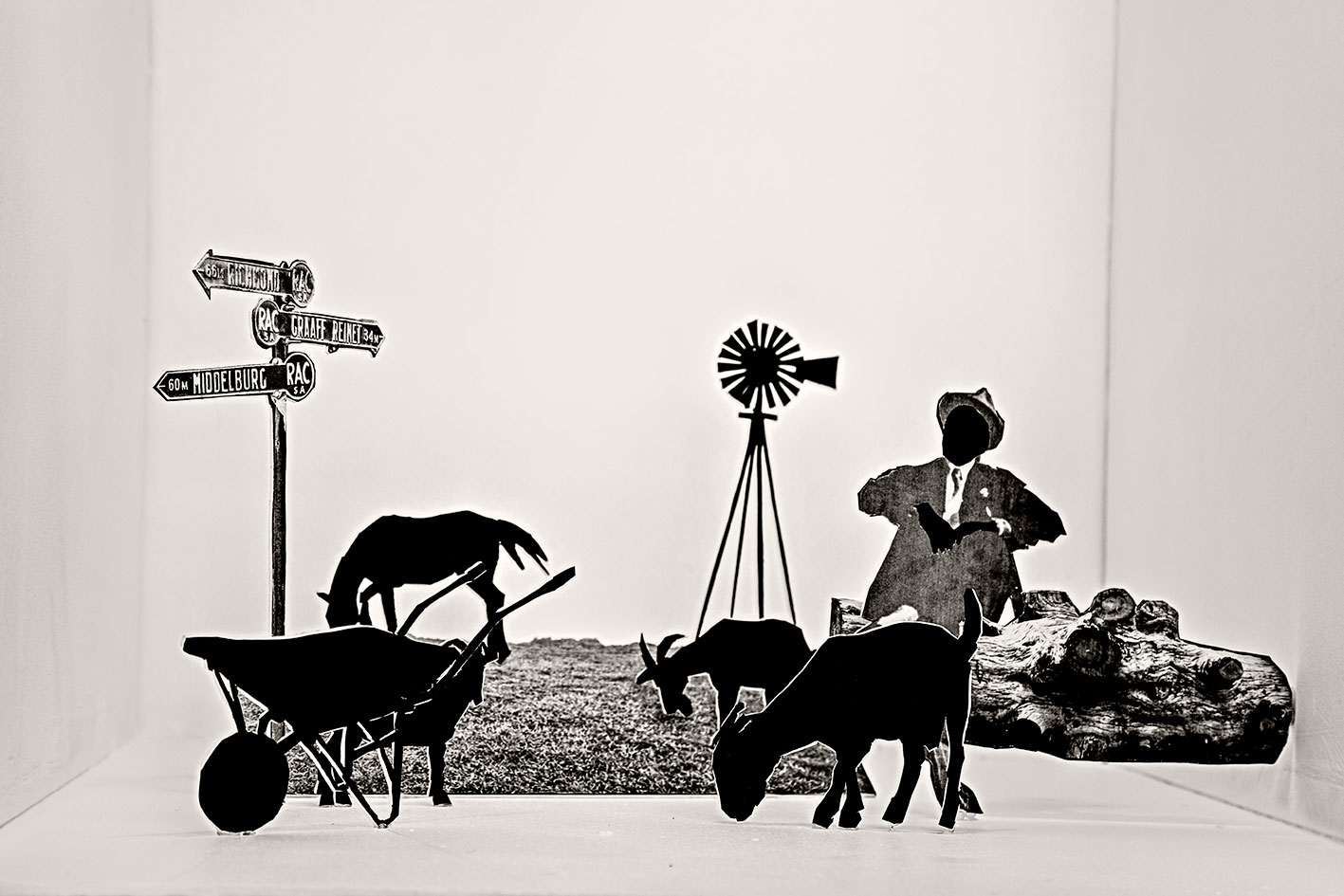 As she researched for her project Kganye found that she could identify with the character of Helen Martins, an artist who transformed her home into a fantastical world over a thirty-year period, beginning in the late 1940s. Martins filled the “Owl House” with over 300 animal sculptures and colored walls with inlaid glass. “She did something so revolutionary at the time, but she was considered an outcast,” Kganye says. “It’s not an easy journey to pursue anything creative, and it’s not been an easy journey from my side. I’ve had to forge my own path to do the creative things I wanted to with very little support. Her story really made me think of my own story.”

Works from Tell Tale speak to Kganye’s interpretation of Martins as part of a lineage of creative women. In sets such as “Never light a candle carelessly,” Kganye imagines Helen at a kitchen table — owl perched on her shoulder — in exchange with a young woman as she was at the end of Fugard’s play. “You lit a candle for me before you left… Such a sad little light, with its little tears of wax running down the side. That little candle did all the crying in here that night,” Helen says. The young woman replies: “There is more light in you than in all the candles put together.” Here, Kganye brings Martins into the present and in alignment with her own experience as a member of an all-female household. “I could imagine myself having this conversation over a table,” she says. “I could relate so much to these ideas we have of each other, about our own perceptions of ourselves and the constant negotiation and the constant interrogation of these perceptions.” 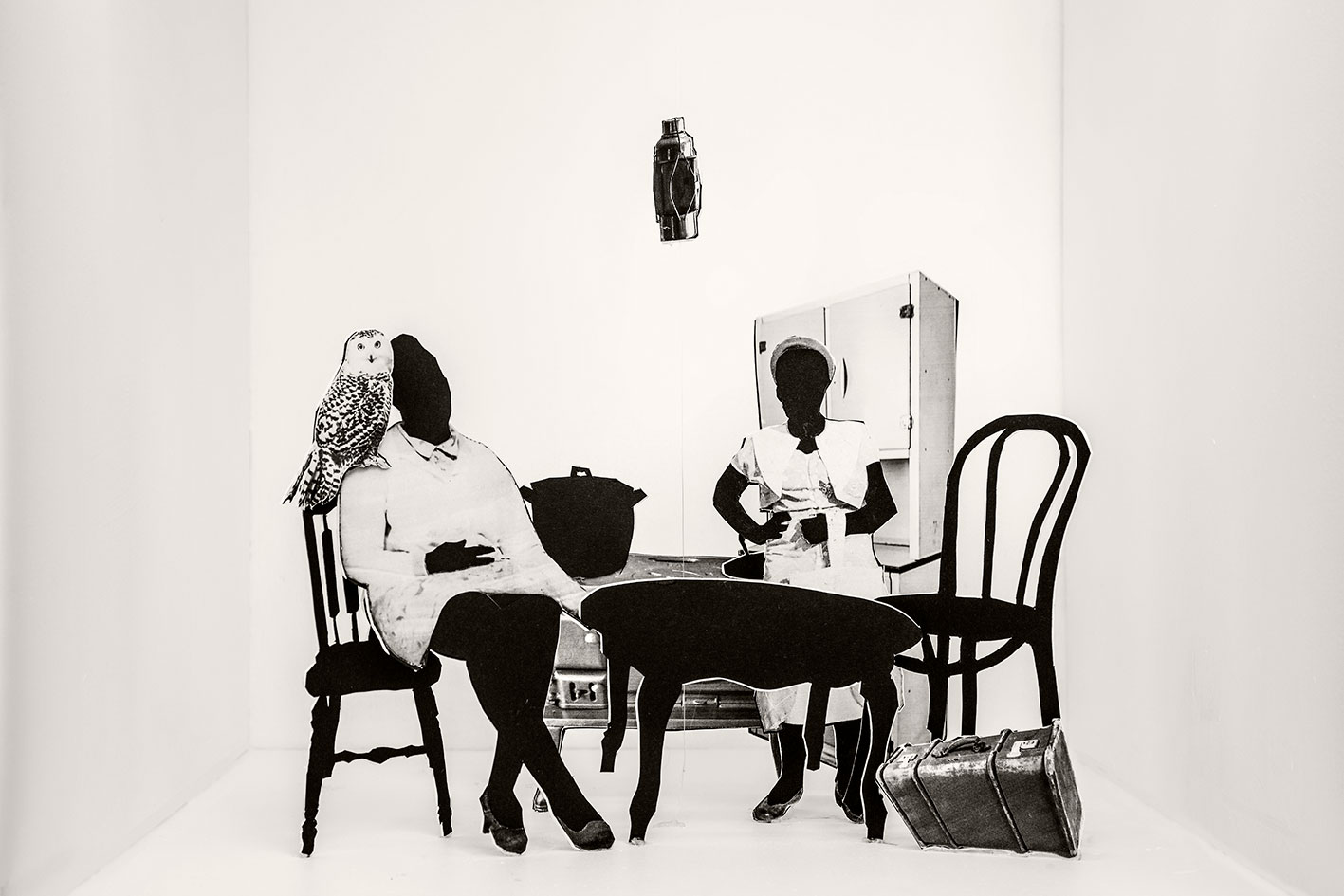 The Tell Tale series represents a point of departure from Kganye’s previous bodies of work, but retains key elements of her artistic inquiries. In “Ke Lafa Leka” (2013) and “Reconstruction of a Family” (2016) Kganye explores the space of the family photo album and the ways in which private archives become a space “to project what we can recall and perhaps a space to question and invent a new history.” As in Tell Tale, Kganye uses cut-out silhouettes to create interpretive dioramas. In doing so, she transforms the family photo into a modular construction, equally responsive to each viewer’s recollection: figures can be moved, a moment could have happened differently, and each viewer can use the pieces to build their own memories. 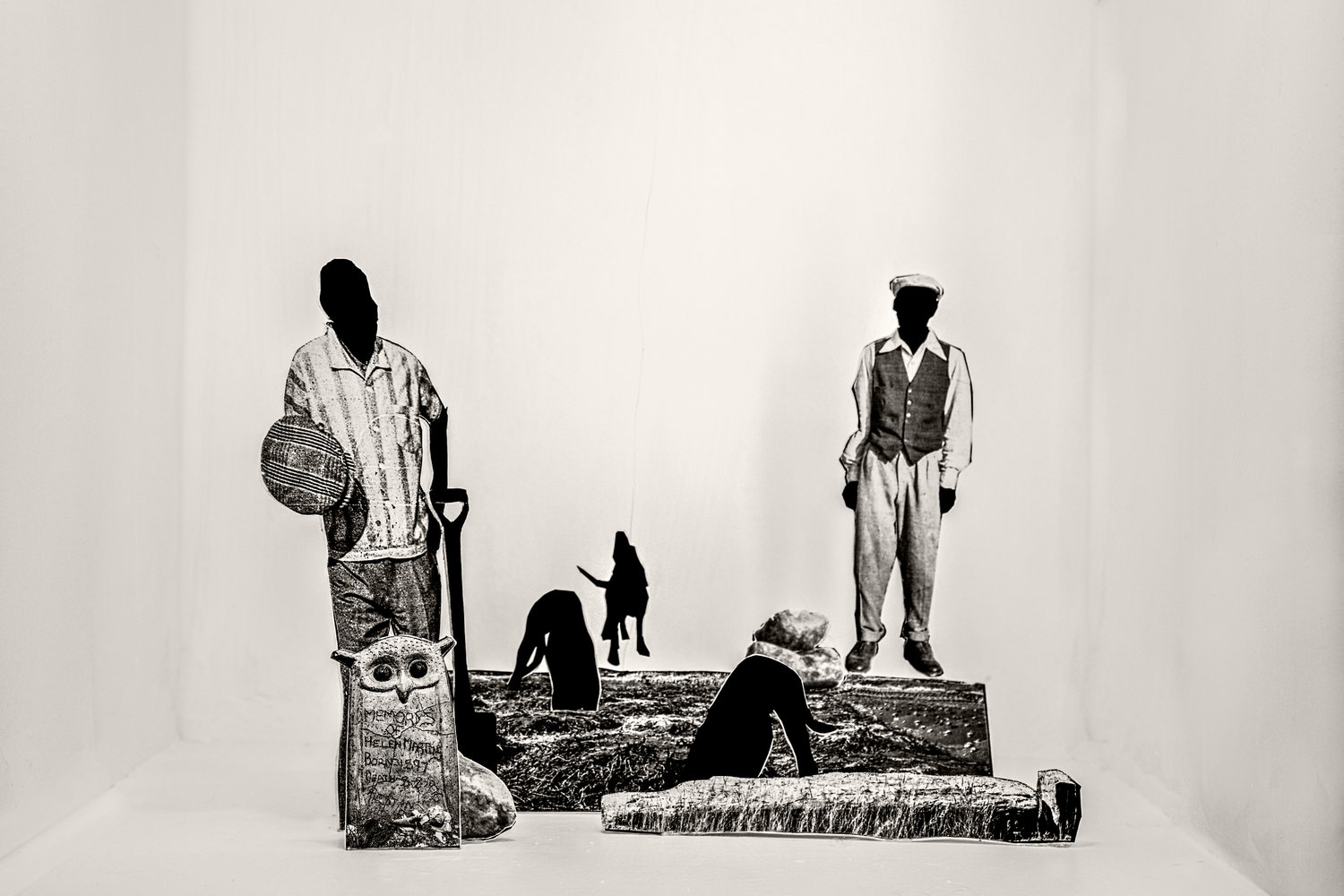 ©Lebohang Kganye, The nameless ones in the graves, 2018. From the series, “Tell Tale.” Inspired by “The train driver” by Athol Fugard. Inkjet print on cotton rag paper.

In both Tell Tale and her earlier series Kganye makes use of photography as one part of her process. In this respect her work reflects a way in which many young South African artists are engaging with the medium: as a tool with which to explore themselves and the questions they have about their environment. “Our generation isn’t purely documentary or documentary-based in terms of their approach to photography,” Kganye observes, though she notes that peers such as Thabiso Sekgala have made incredibly accomplished documentary work. “I think [photography] is a tool not for answering, but for questioning,” Kganye says, “that’s really what it’s about for me.” 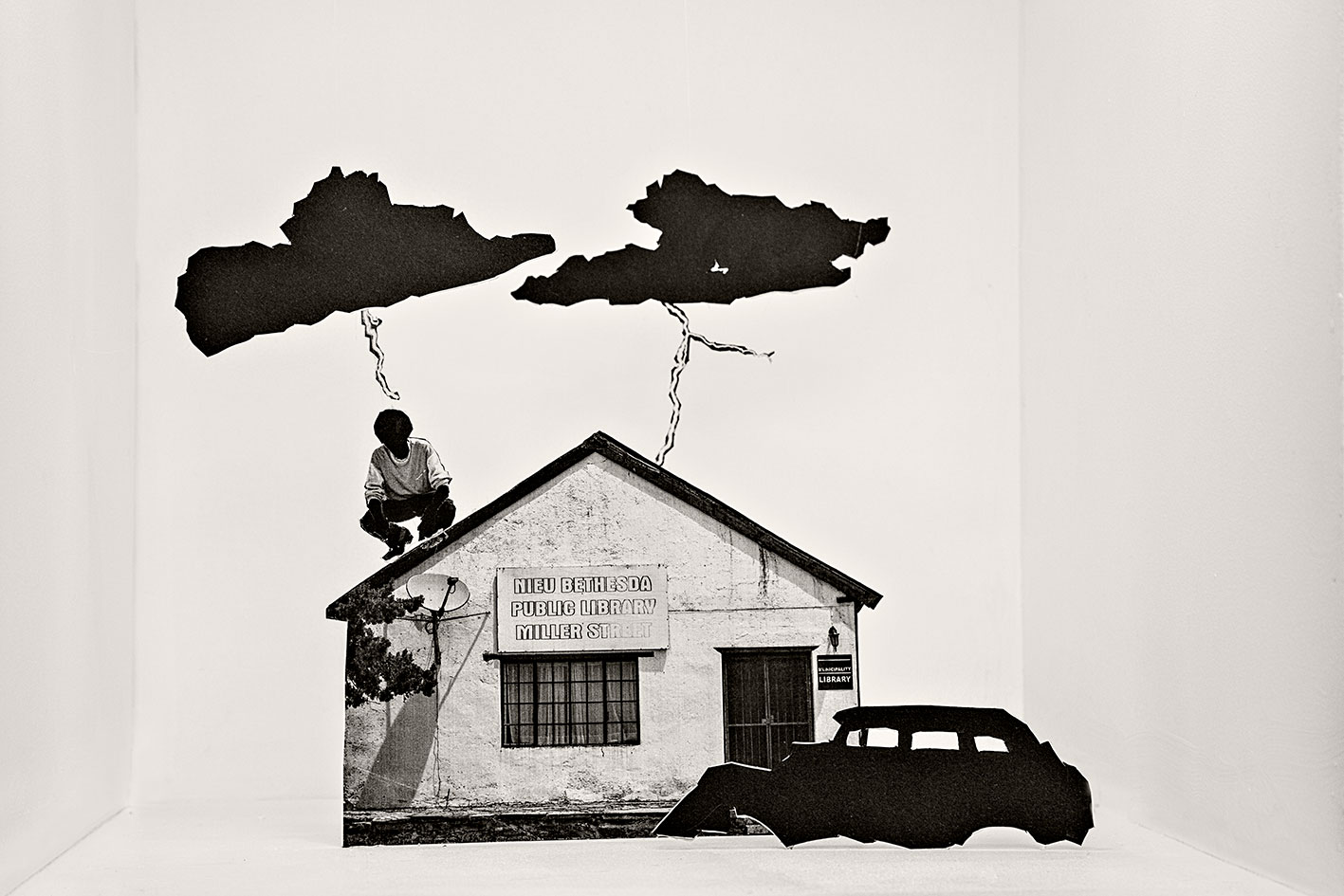 ©Lebohang Kganye, Johannes Hattingh struck by the bolts from above, 2018 Inspired by Maverick by Lauren Beukes and Nechama Brodie. Inkjet print on cotton rag paper

Lebohang Kganye is an artist living and working in Johannesburg. Kganye received her introduction to photography at the Market Photo Workshop in 2009 and completed the Advanced Photography Programme in 2011. She also completed her Fine Arts studies at the University of Johannesburg in 2016 and forms a new generation of contemporary South African photographers.

Although primarily a photographer, Kganye’s photography often incorporates her interest in sculpture and performance. Over the past seven years she has participated in photography masterclasses and group exhibitions locally and internationally. Kganye was the recipient of the Tierney Fellowship Award in 2012, leading to her exhibition Ke Lefa Laka. She created an animation from the series, which was launched on Mandela Day 2014 in Scotland, entitled Pied Piper’s Voyage. Kganye was then selected as the Featured Artist for the 17th Business and Arts South Africa Awards in 2014. She was also awarded the Jury Prize at the Bamako Encounters Biennale of African Photography in 2015 and the recipient of the CAP Prize 2016 in Basel. Kganye recently received the coveted award for the Sasol New Signatures Competition 2017, leading to a solo show in 2018. Kganye’s work forms part of several private and public collections, most notably the Carnegie Museum of Art in Pennsylvania and the Walther Collection in Ulm. 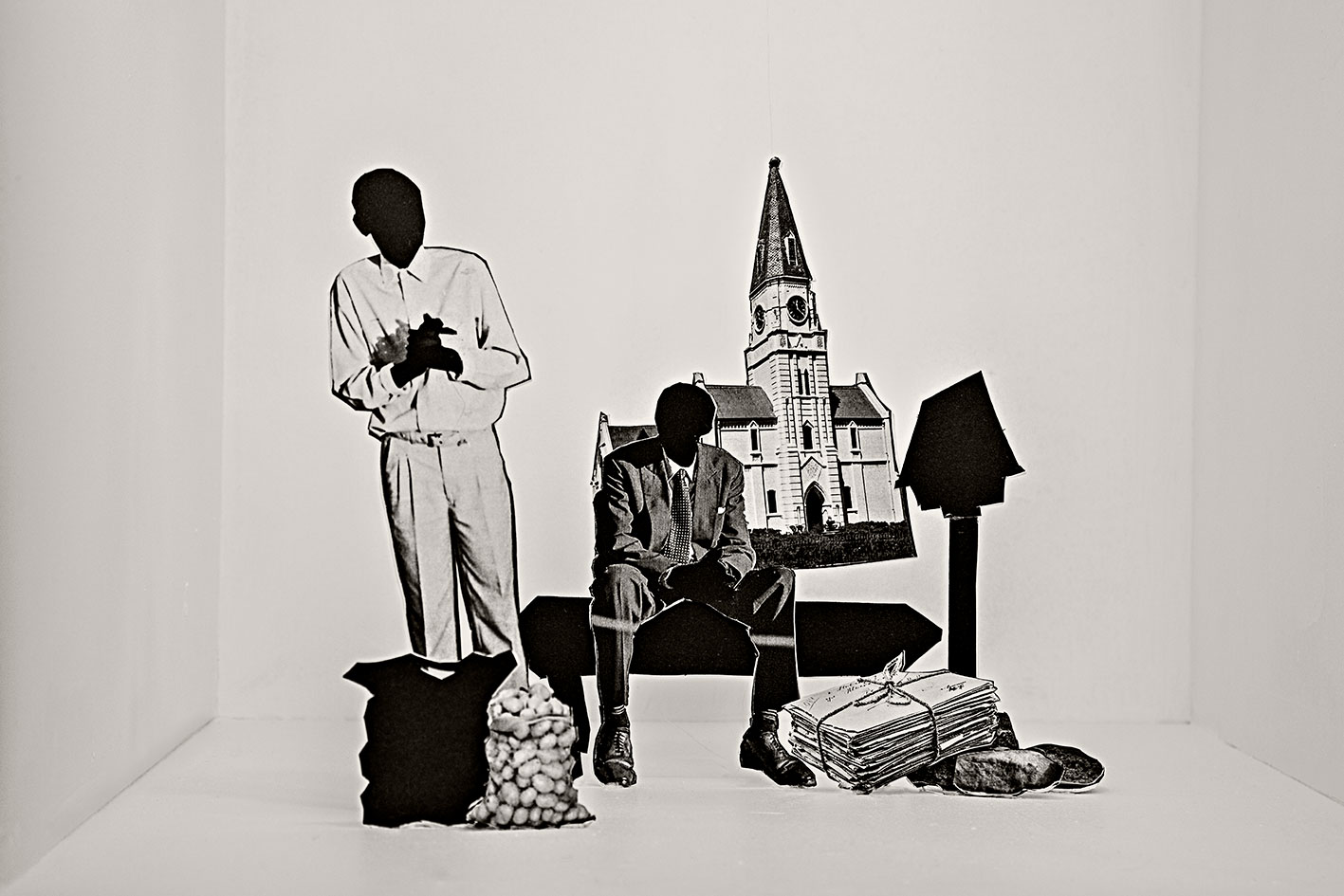 With the scorching sun piercing the skin, I spent weeks walking along the gravel roads of the small town Nieu Bethesda in the Karoo, Eastern Cape which the residents call a village, a term foreign in my vocabulary. Shawn Graaff – an American young woman who lives between Cape Town and Nieu Bethesda and works on the restoration and conservation of the Owl House and the cement sculptures created by Helen Martins and Koos Malgas. She introduced us to many of the villagers, including a beekeeper who makes cosmetic products in her backyard from beeswax, a violin string maker using horse tails to make the strings, we drove to a livestock auction where the farmers bid for sheep and met a ‘tannie’ in her tea garden who translates Athol Fugard’s plays from English to Afrikaans.

Through the construction of miniature theatre sets with silhouette cut-outs of the characters in the diorama, I stage the stories the villagers narrated to me in relation to Athol Fugard’s play Road to Mecca and a chapter from Lauren Beukes’ book Maverick about Helen Martins. Tell Tale confronts the conflicting stories, which are told in multiple ways, even by the same person – a combination of memory and fantasy. The work does not attest to being a documentation of a people but presents their personal narratives, which they share over a cup of tea, homemade ginger ale or the locally brewed beer. These prized possessions hearken back to a particular time but are also vehicles to a fantasy that allows for a momentary space to ‘perform’ ideals of community. Fictive narratives depend on oral histories, genealogist, Kimberley Powell states, “Oral histories are stories told by living people about the past. Generally, these are stories of their own life and the life’s of the people around them. Often an oral history includes details and stories that exist nowhere other than in the individual’s mind.” – Lebohang Kganye 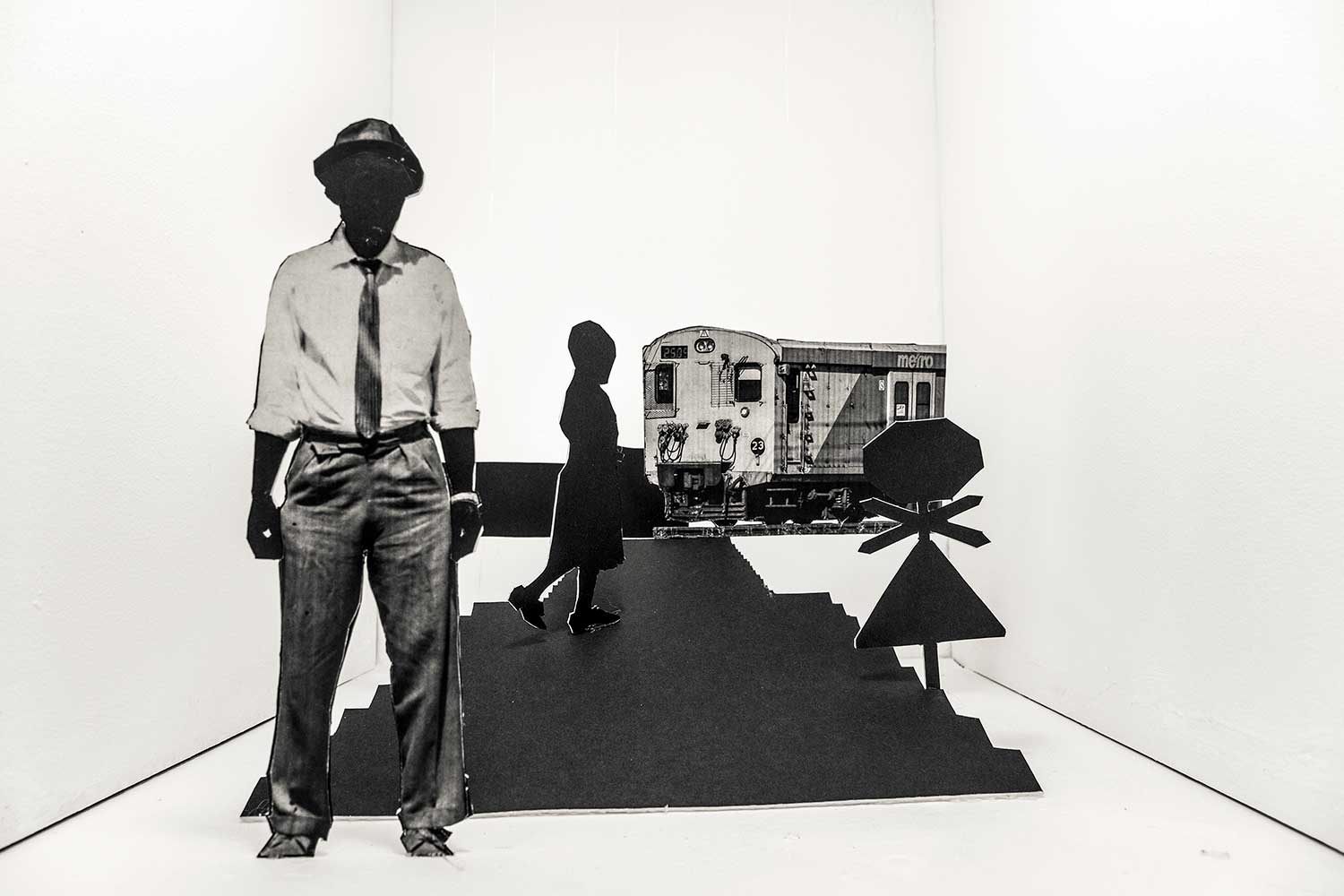 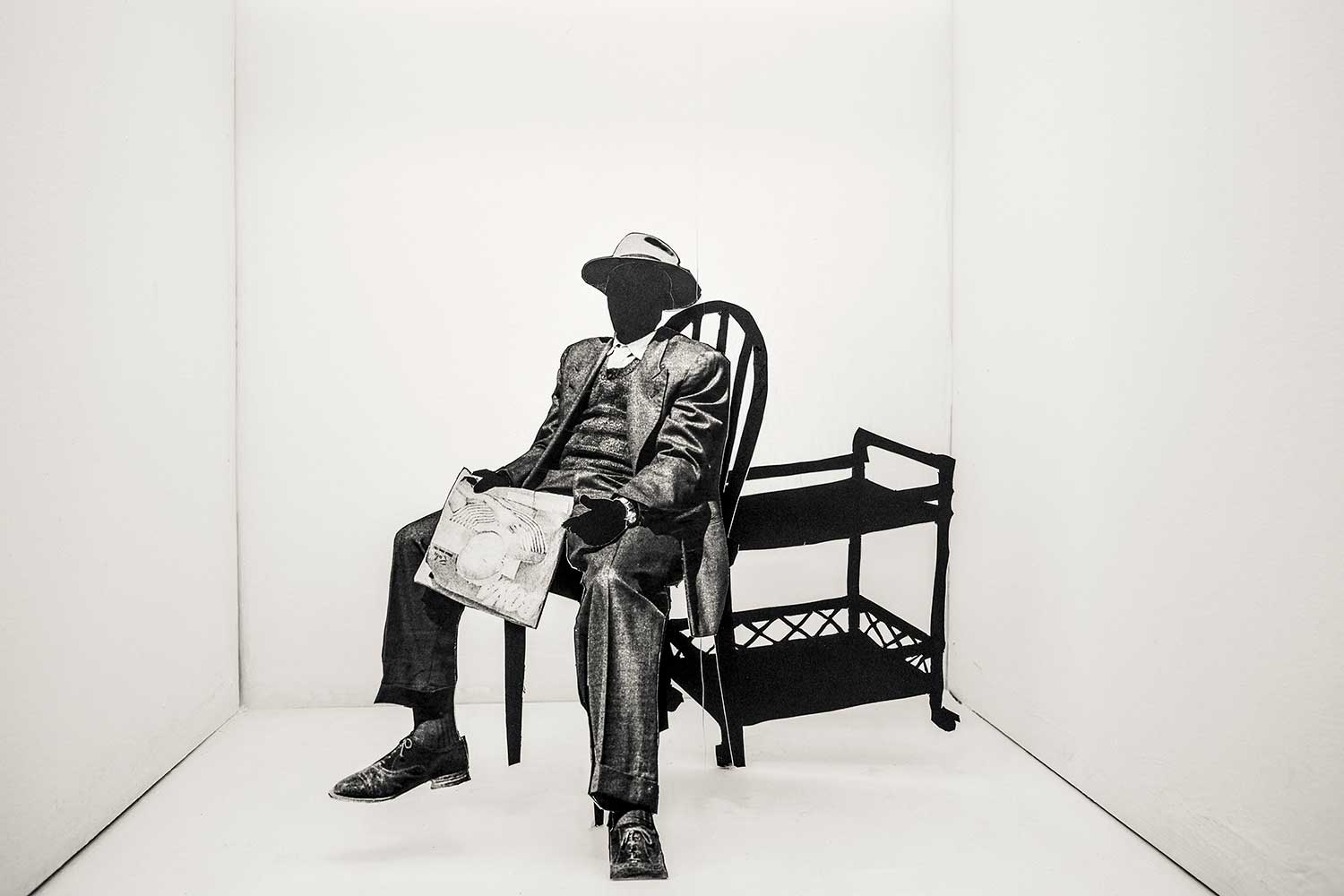 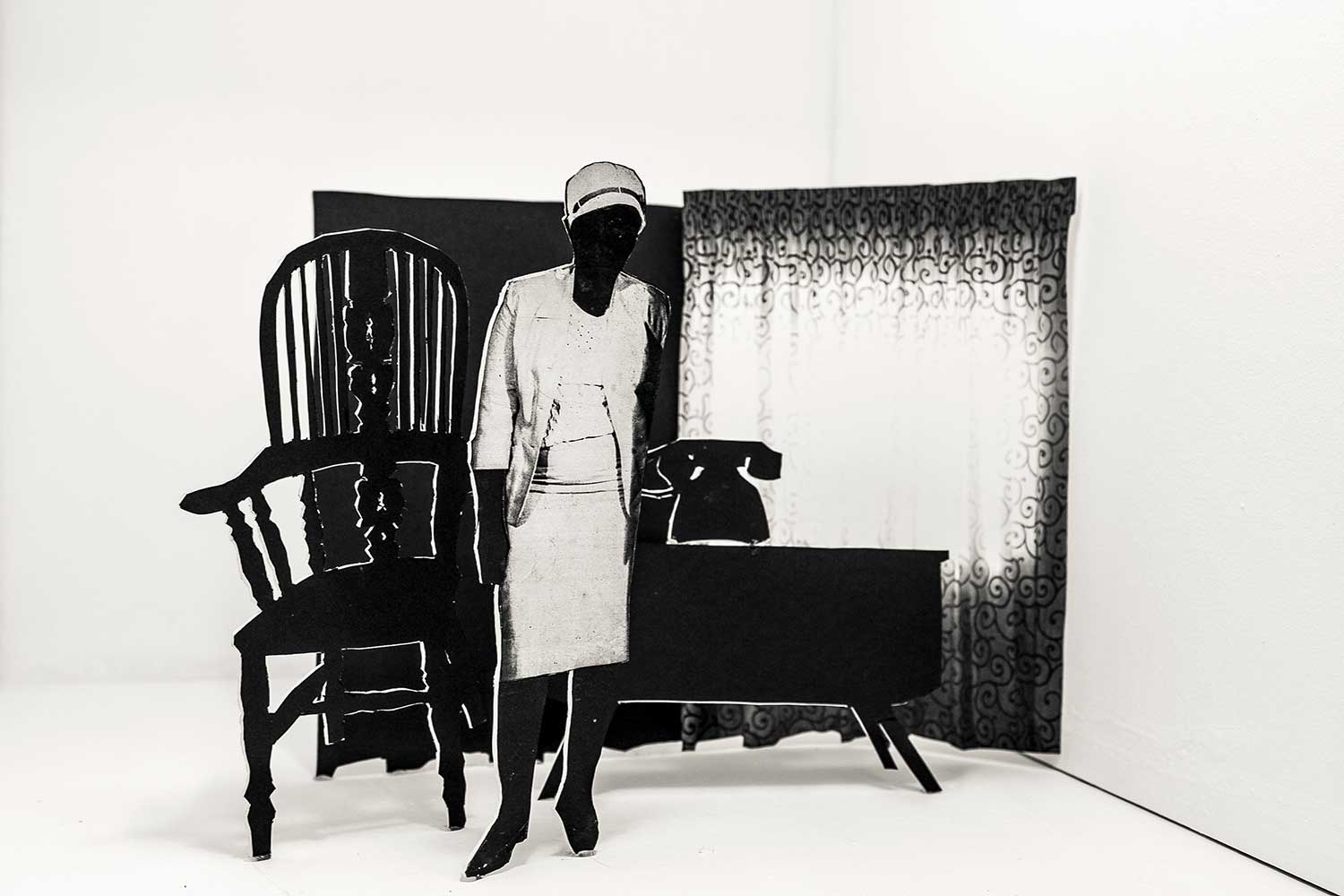 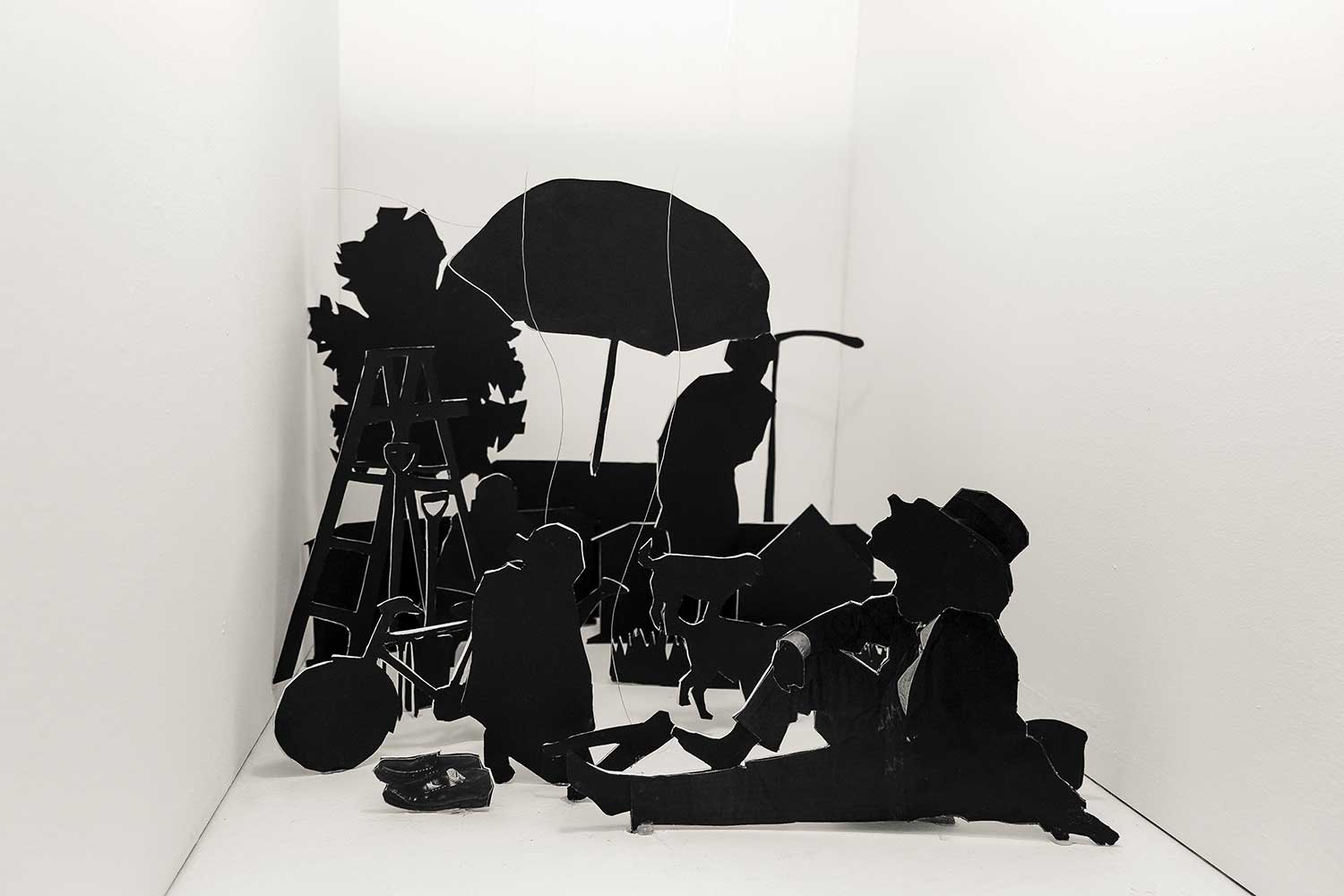 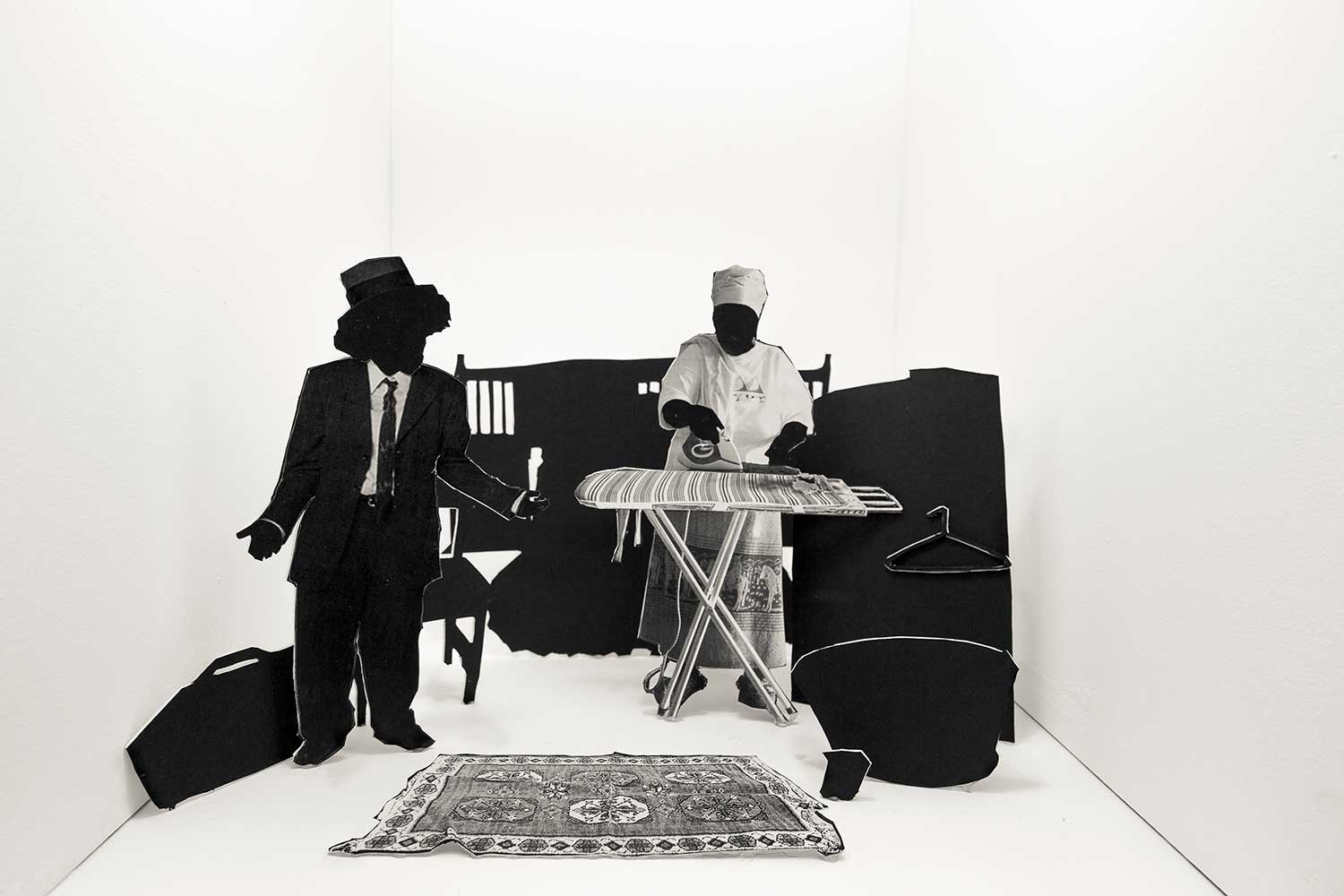 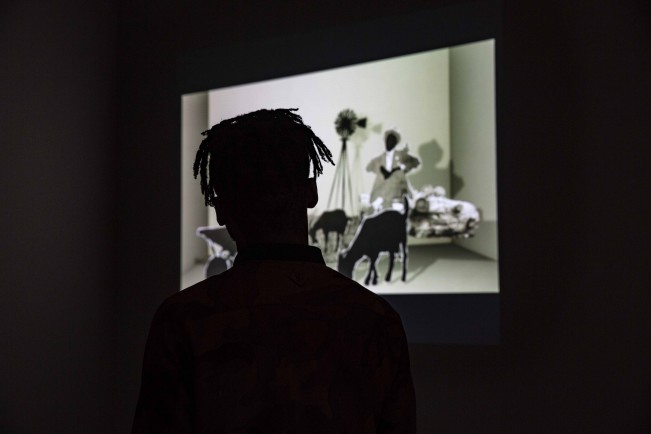 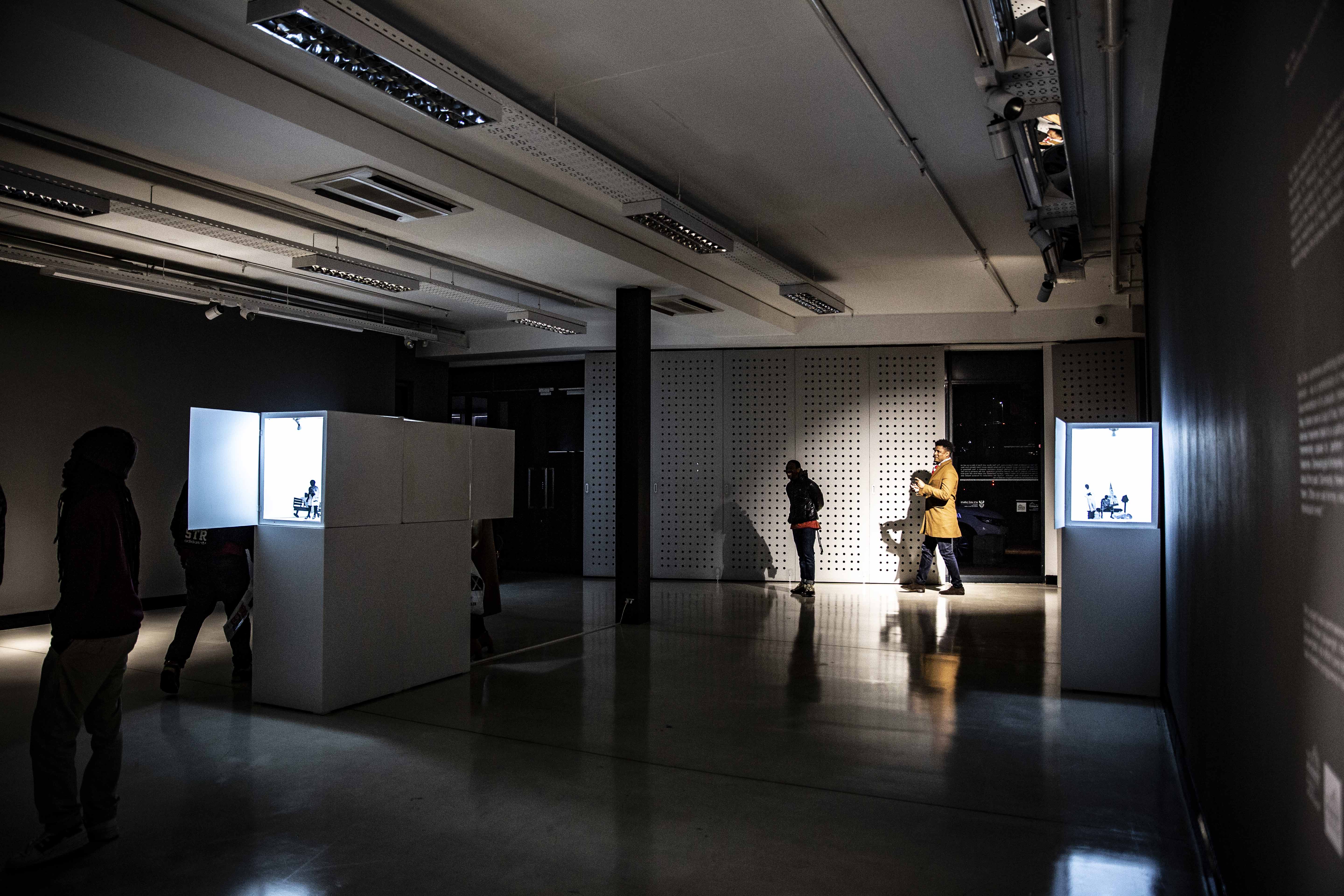 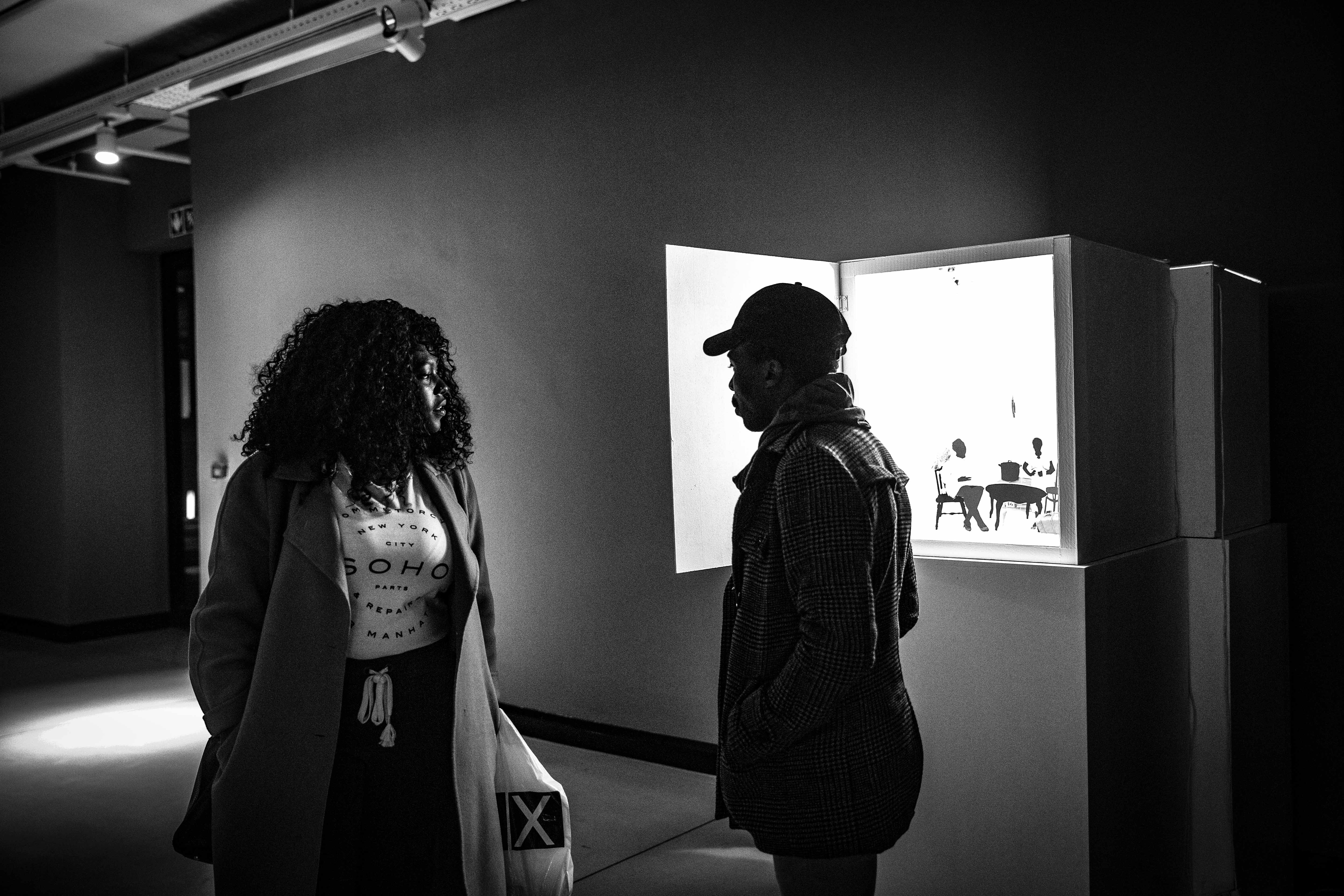