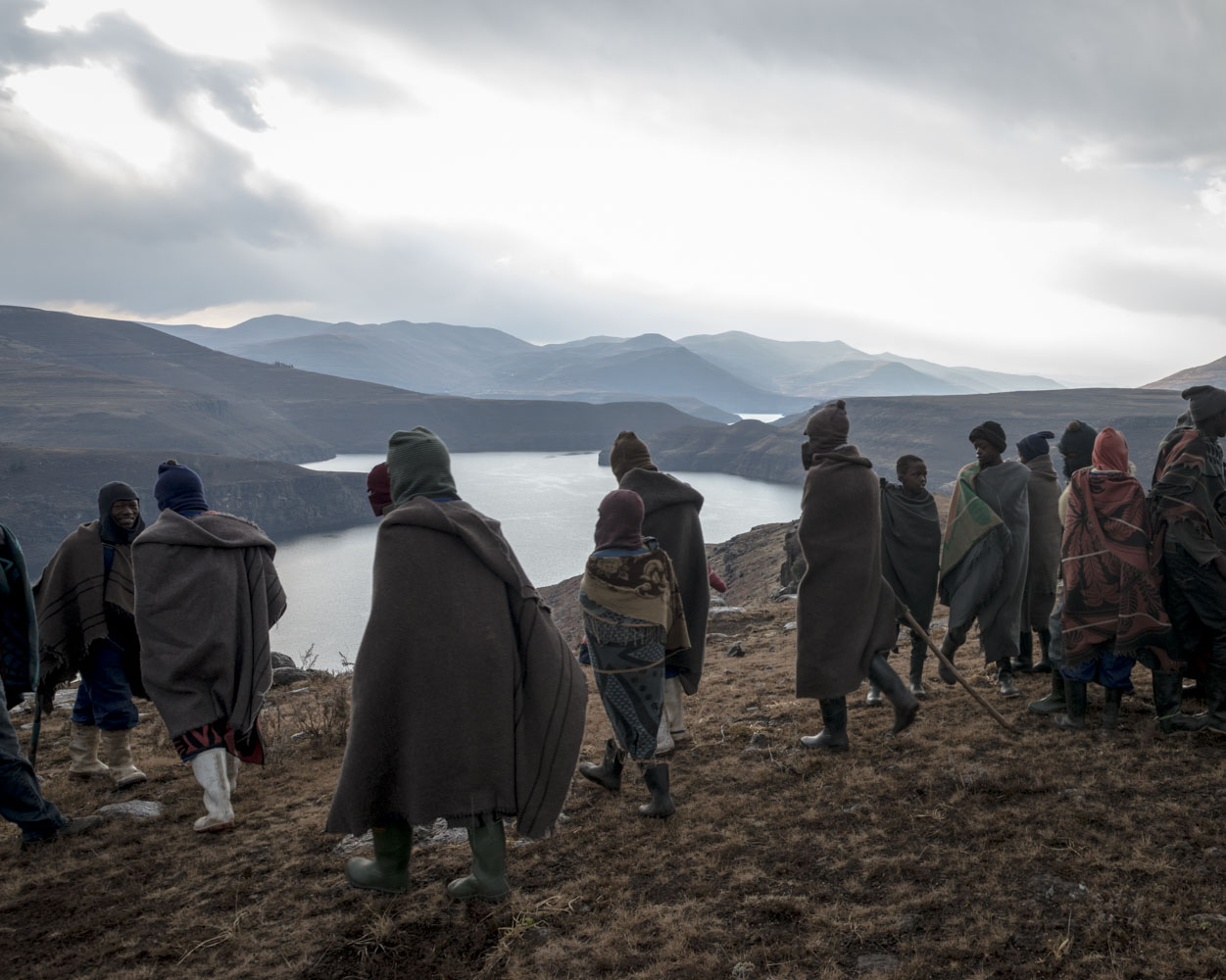 The Katse Dam project by South African photographer David Southwood is a four-part series with two points of focus: the physical and eldritch presence of Africa’s highest dam and the community of Basotho herders who alongside it. The construction of the mammoth concrete structure and creation of the Katse transfer reservoir marked the first phase of the Lesotho Highlands Water Project (LHWP), which orchestrates the distribution of water from Lesotho’s Senqu River and its tributaries to Johannesburg, South Africa, and the Witswatersrand industrial region. In exchange for the loss of their “white gold,” the Lesotho government receives (fluxating  and often minimal) royalty payments and a hydroelectric power station that can generate a domestic energy supply. Surrounding communities are not permitted to access or use the Katse water and in recent years drought has severely limited their supply of drinking water and what they use to grow food.

The Katse Dam series grew from Southwood’s interest in the disconnect between a visual abundance of water and a community suffering from a scarcity of the same resource. He began traveling to Lesotho in 2015 to work on this project and has since made three trips to the area. During his visits connected with local herders and began finding out more about how the dam has affected their lives. Before construction of the dam, he learned, residents could fish in the waters, graze animals in the fertile valleys, and access neighboring villages without needing to travel large distances.

In the course of his work with residents, Southwood also began to feel impacted by the sheer presence of the dam itself. The water body sits below the vantage point of surrounding roads and it gave him a constant feeling of vertigo and a sense of looming danger. He further describes feeling the dam as a “sinister presence” and as something that unnaturally exerts a psychic weight onto those around it. “The sensation of being at the dam is claustrophobic because it’s omnipresent, vast and dead. It’s like living near a beached whale which never goes away,” he says, “it’s claustrophobic in the sense that one is unable to escape, rather than being in a confined space.”

Southwood explores this sensation in a series of black and white panoramas of the dam in which he plays with the representation of its scale. In images such as “Capital 18” hill contours plunge into the water on all sides and pull the shimmering surface backwards into the frame. In other photographs, such as “Capital 8,” Southwood manipulates shadow and highlight tones to transform the water into a two-dimensional form, and obscure its depth in relation to the surrounding cliffs.

In addition to the panoramas the Katse Dam series includes two portrait series of local herders. One of these subseries — the “Balaclava” collection — show close-up views of residents wearing a traditional headgear with only their eyes visible to the camera. This series closely resonates with the explorations of power, access, and visibility explored in the panorama images. Southwood describes himself as an artist who “considers questions of power and privilege in relation to portraiture” and finds an important encounter in these images, wherein subjects choose to obscure their faces for his photograph. The portraits further echo the latent tension Southwood perceives in the dam. The strobe lighting sets the subjects apart from dim surroundings and creates a theatrical disconnect symbolic of the literal restriction to the dam. In some of the portraits the dam is visible, once again making reference to the reservoir as a “blank and distant water mass” and as a “perpetual backdrop.” 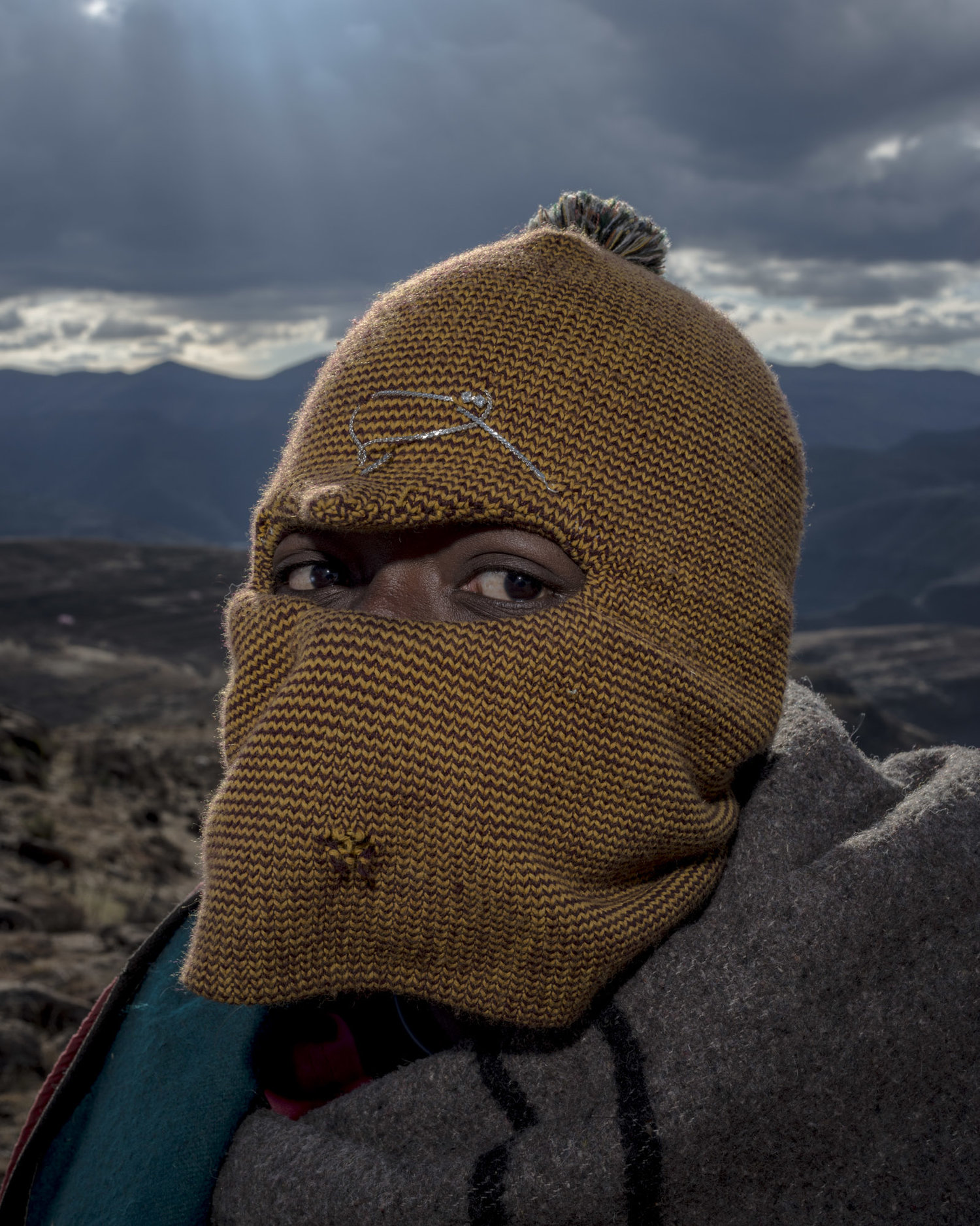 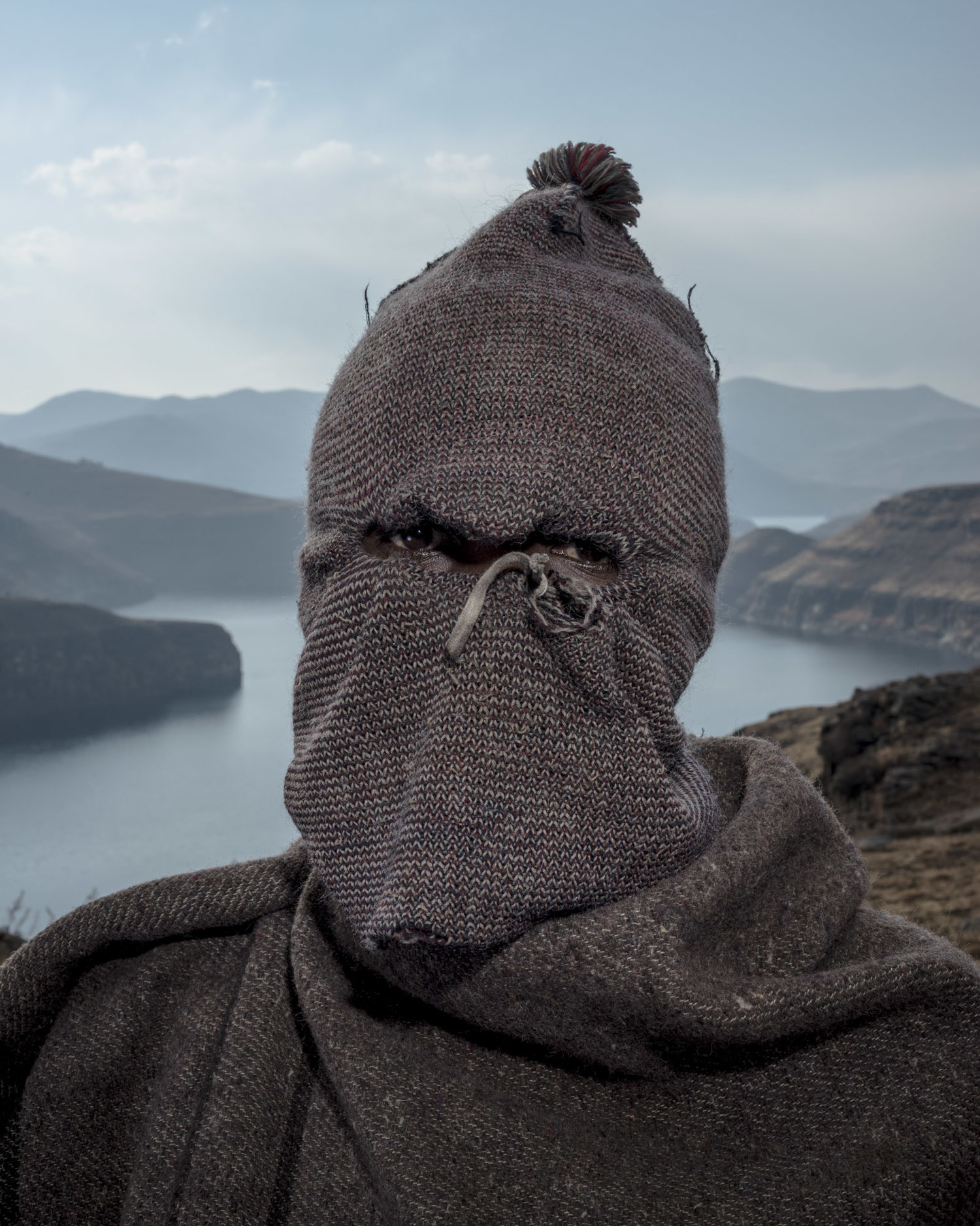 New phases of the Lesotho Highlands Water Project are underway and Southwood plans to continue to build onto his series. As public concern over water supplies in South Africa grow all over the country, Southwood’s series offer a poignant look at the literal costs of capital-based resource management. “Katse Dam is an iteration of very long-winded, skewed power relations,” he observes, it’s a “spectacularly monstrous dead weight whose agency has been wholly orchestrated by a country hundreds of kilometers away.” 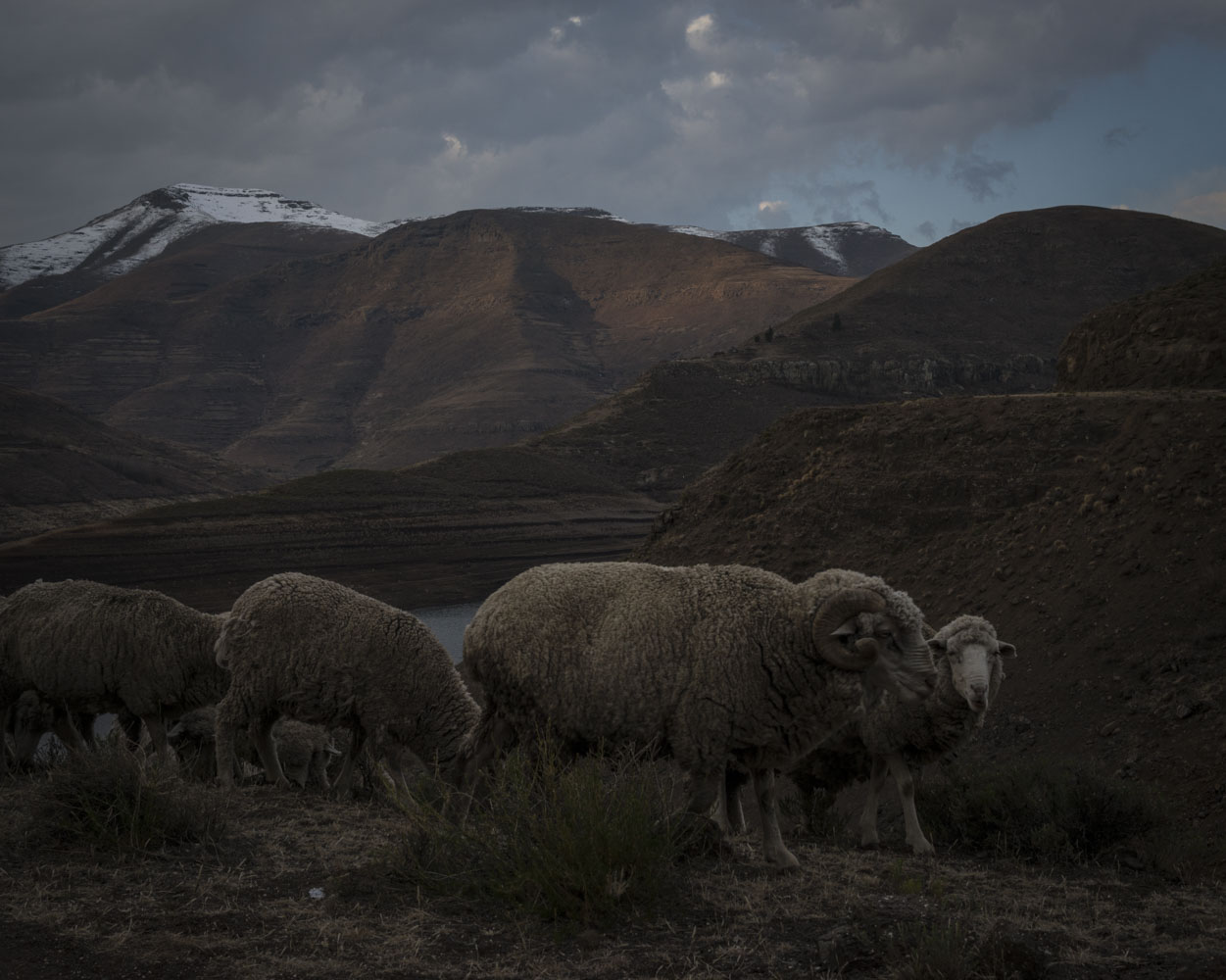 Dave Southwood is a photographer who concerns himself with the medium’s production and consumption, human rights and ‘documentary’s’ outer limits. The photographer’s contact with his subjects is carefully organized, generally protracted, and is designed to shift power away from the author inasfar as possible. Southwood’s corpus of work is a miscellany of personal projects and jobs each of which identifies problems and asks questions with craft, humour and empathy.

His photos can be viewed at The South African National Gallery The Finnish Museum of Photography, The Christoph Merian Stiftung, the collection of the Constitutional Court of South Africa, The Goethe Institut, The Spier Art Collection and private collections in South Africa and abroad. He has contributed to, and been featured in, publications like Adbusters, COLORS, the New York Times Magazine, and Wallpaper. He has also edited photo editions of magazines,  taught at Universities and written for the art press.

In 2000, together with some township photographers, he set up the first non-profit organisation for ‘street photographers’ in the Western Cape called Umlilo. This was after having worked at The University of Cape Town in the same developmental field.

A decade-long project photographing a flea market has been made into a book and is published by Fourthwall Books. The author Ivan Vladislavic wrote the longest of four commissioned texts in the book. He recently completed project about Tanzanian Stowaways (MEMORY CARD SEA POWER) who live below the N1 freeway in Cape Town. This project was shown in the US in mid-2014 together with the N1. Other publications in 2014 include The Bill of Rights, a photobook which illustrates the South Africa’s 20-year old Bill of Rights, with an introduction by Constitutional Court Judge Edwin Cameron, and MEMORY CARD SEA POWER, a broadsheet newspaper. 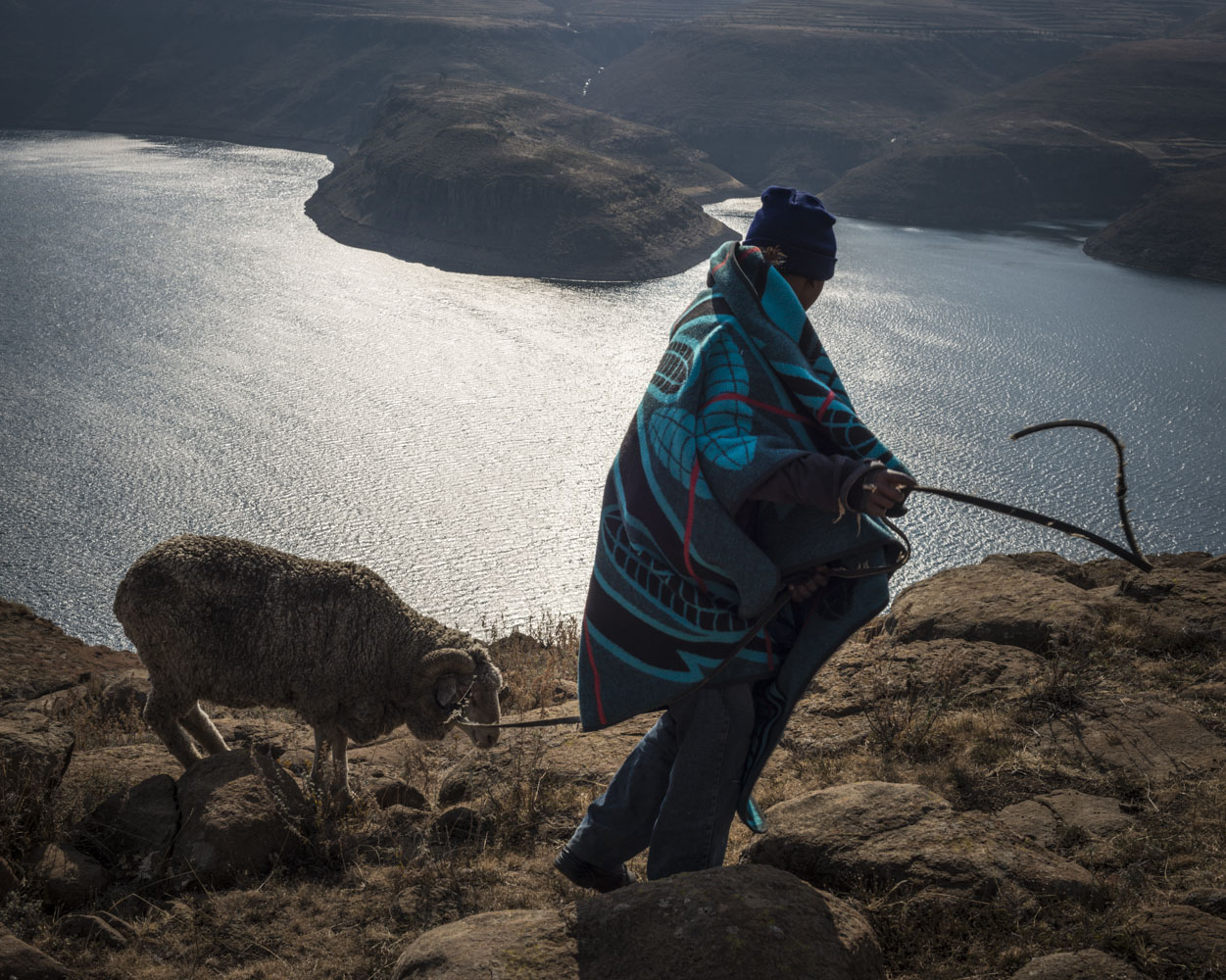 These portraits and landscapes were made between July and September 2015 on three trips to Lesotho which I undertook in order to introduce myself to the communities, meet the village leaders where I would be working, check the light, find someone to help me solve practical problems and get a sense of conditions around the dam. The work was done in the villages of Sephareng, Mokhethuoa, ha Maphoto and ha Mpeli.

Initially I went to Lesotho to photograph the Basotho herders living alongside the Katse Dam in their traditional headgear, balaclavas. As someone who considers questions of privilege and power in relation to portraiture the conundrum of photographing subjects whose countenances are obscured by a woolen hat with only slits for eyes appealed to me. The portraits of the herders wearing their blankets are a by-product of my initial aim, but have come into their own – as equal, serene counterpoints to the implied violence and anonymity of the balaclava series. These portraits humanise the balaclava photographs.

I am completely taken by the dam’s monstrous presence. In 1998, when Mandela was abroad, South Africa fought a small war with Lesotho, ostensibly for political reasons, but also in order to secure rights to Lesotho’s water. The water from the Katse Dam flows straight to the Gauteng Province, which contains Johannesburg and the thirsty Witwatersrand industrial region. The irony is that, since the dam’s construction in the nineties (when Lesotho was dubbed the ‘Water Castle’ for South Africa) Lesotho in 2016 has been experiencing a severe water crisis.  The LHWP Treaty, which is only reviewed every 12 years states that ‘Neither of the Parties shall cause or permit under any circumstance nor for any reason whatsoever any unilateral interference with the delivery of water to the Designated Outlet Point” means that Lesotho is legally bound to continue sacrificing its “white gold” at a stipulated rate of 4,2 million litres of water per minute while thousands of Basotho are unable to access drinking water or grow enough food to eat.

What came to appeal to me, in the words of Alan Sekula, are “the imaginary and material geographies of the advanced capitalist world.” This material geography has direct pipelines to the privately-owned mines in South Africa, which employ ±43 000 Basotho Basotho in terrible conditions, and which claim the lives of around 100 Basotho miners every year. Four of the 34 slain during the Marikana Massacre of 2012 were Basotho. 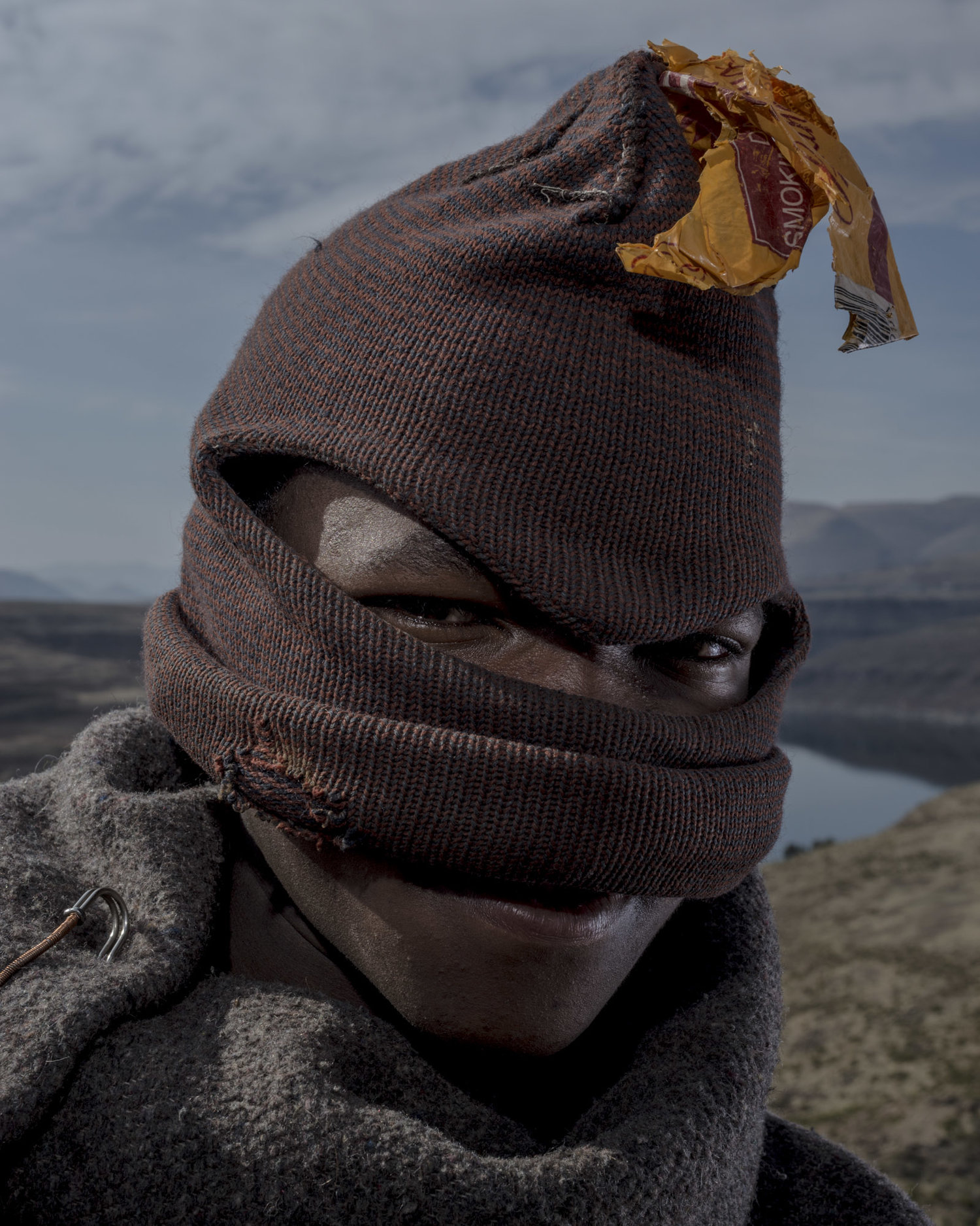 The dam is entirely sinister. It sits abstracted and far below the line of horse, pedestrian and occasional car traffic. It has the dense, depthless magnetism of stagnant mine water, and has engendered earthquakes, virulent microclimates and an array of social problems. To me it looks like an info graphic representing the insidious flow of capital. I have made the landscapes from vantage points, which confound the viewers’ sense of scale, or enhance the ridiculous, unnatural vertices, which dominate the land’s point of contact with the water. I have also adopted a formal approach, which confuses positive and negative space. Equally sinister are deals struck by the Lesotho Highlands Water Project (LHWP) with displaced, discontented Basotho. Although they claim to be compensating the poor, rural villagers for the negative effects of the dam, compensation hasn’t unfolded in the way it was promised. Protracted action against the LHWP will continue for as long as water flows to South Africa.

In July 2016 I returned to the regions where Phase 2 of the LHWP is taking place. I documented the area in preparation for a comparative report once that phase is complete, visited friends I have made over the years, and to see what the herders are up to. I also consulted with the chiefs and communities to agree how best to remunerate the Herders with portions of any profit I make from this project. – David Southwood 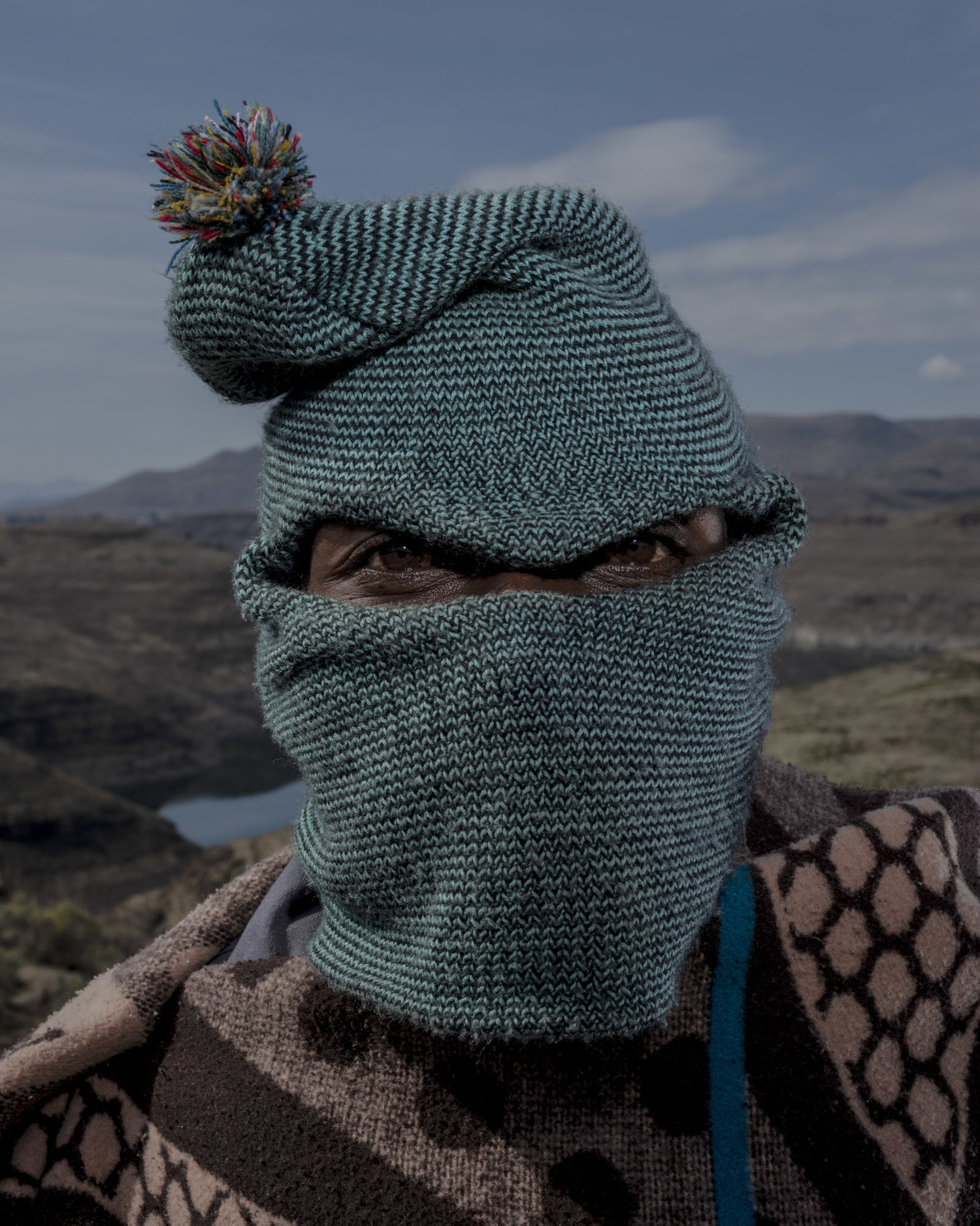 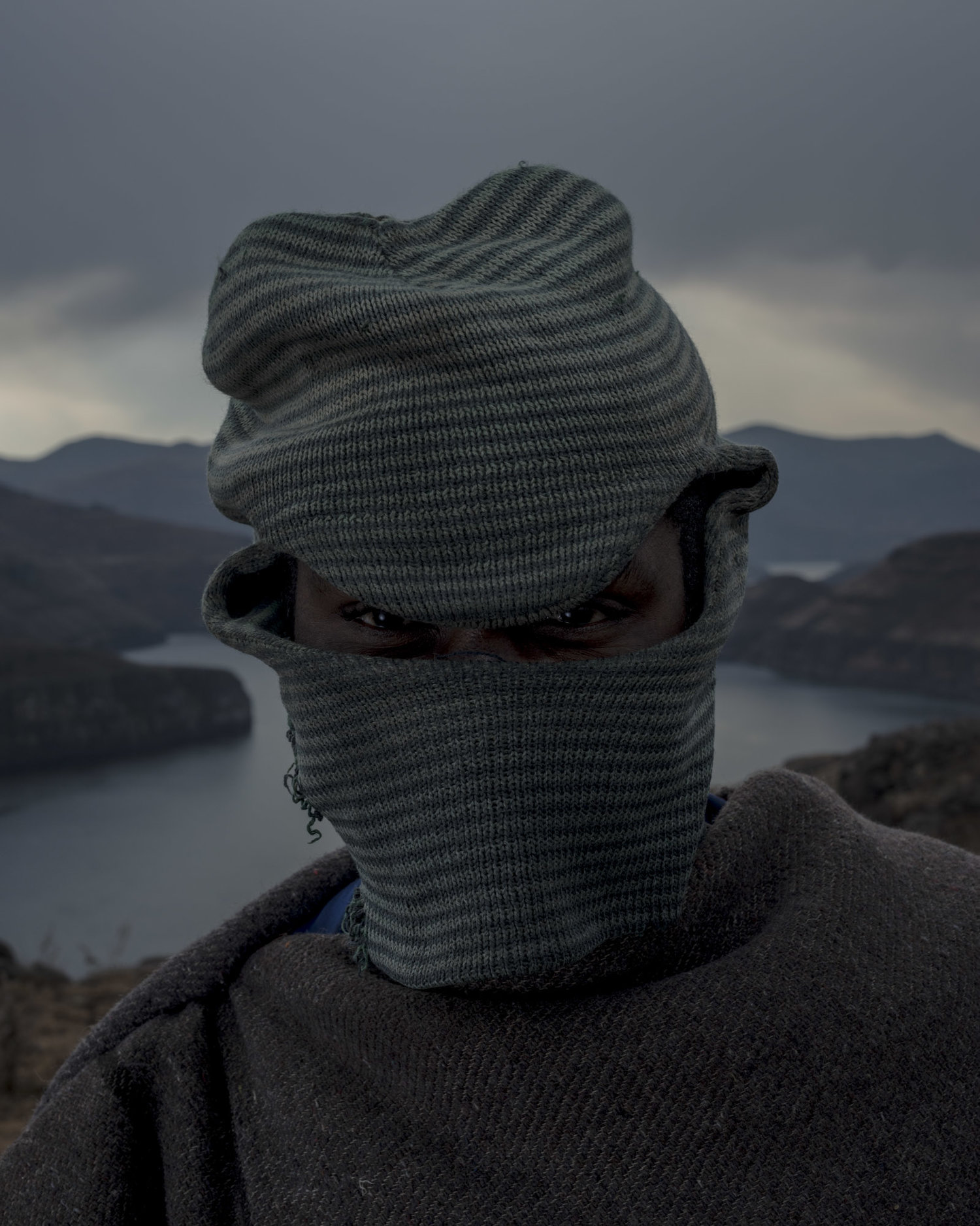 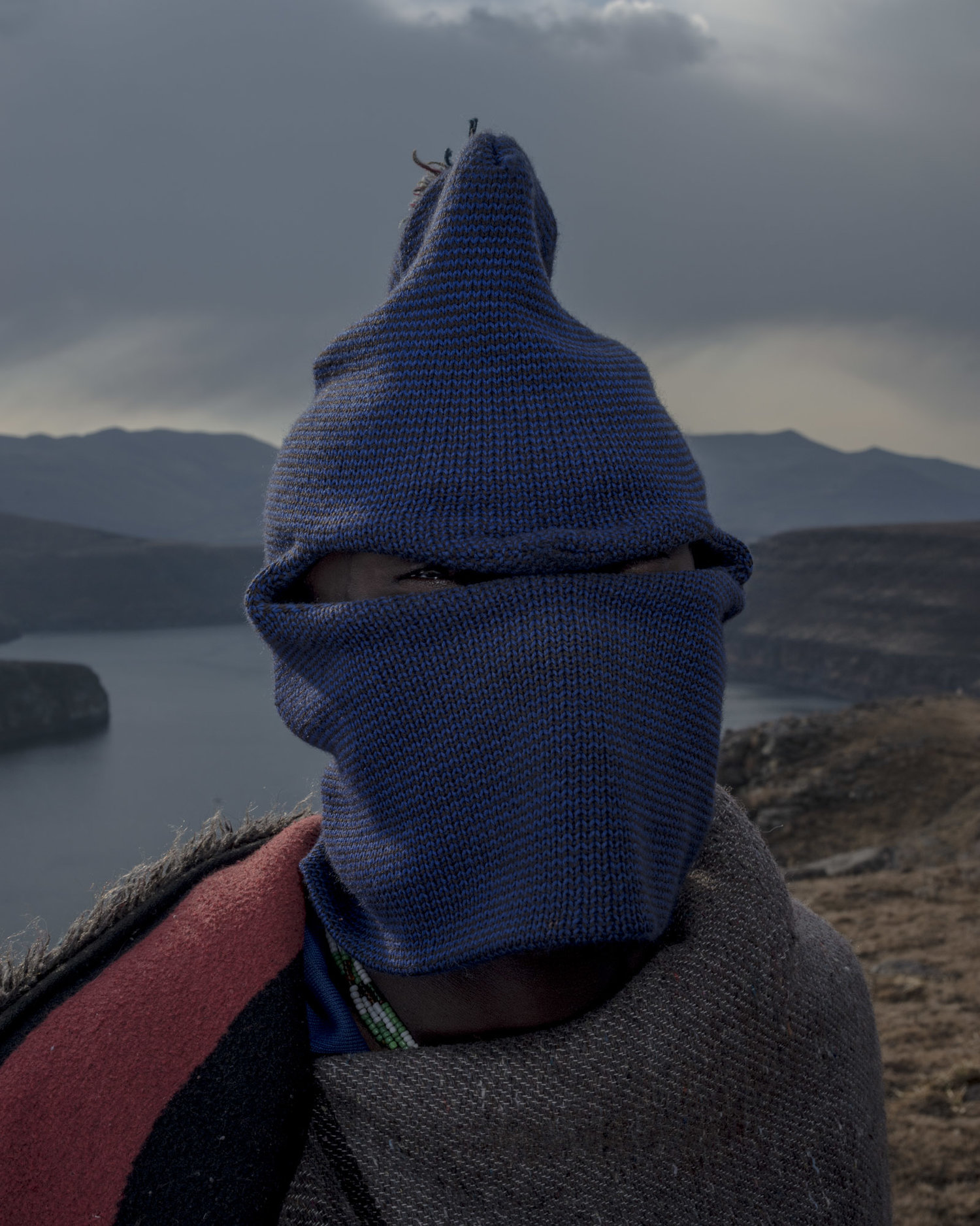