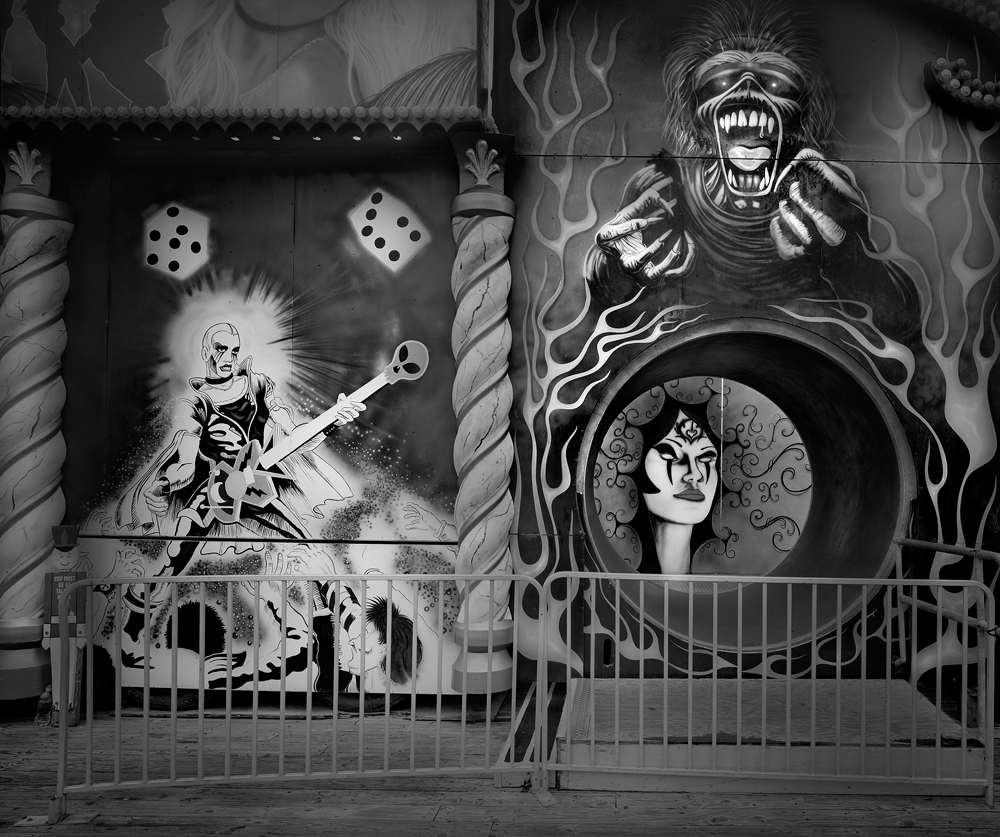 Michael Massaia’s photographs are imbued with a sense of beauty and mystery, as if images conjured from a dream.  In Afterlife New Jersey shore boardwalks are deserted and appear illuminated by an internal glow.  Conversely, the figures in Sheep Meadow float in a lush black void stripped of their context by Massaia’s expert printing techniques.

Born in New Jersey, 1978, Michael Massaia is a fine art Photographer and Printmaker who has spent the past 14 years documenting areas and objects that never extend to far from his front door. Isolation, disconnection, and an attempt to put a spotlight on the ordinary are the constant in all of his work.  He focuses, primarily, on large format, black and white film, utilizing a variety of highly modified proprietary analog and digital printing techniques.  Michael works alone and is the sole craftsman from the instant the negative is exposed to the moment the final print is made.

In 2008, I started to document the amusement piers that skirt the New Jersey Coast Line during their most vacant moments (usually between the hours of 4 and 6am.  The images were predominantly shot on the Funtown and Casino Piers in Seaside Park & Seaside Heights New Jersey.  In 2012, Hurricane Sandy rolled in and completely destroyed both piers. The landscape was forever altered. These images chronicle the final days of these Piers, as well as what remained of the piers after the hurricane. – Michael Massaia 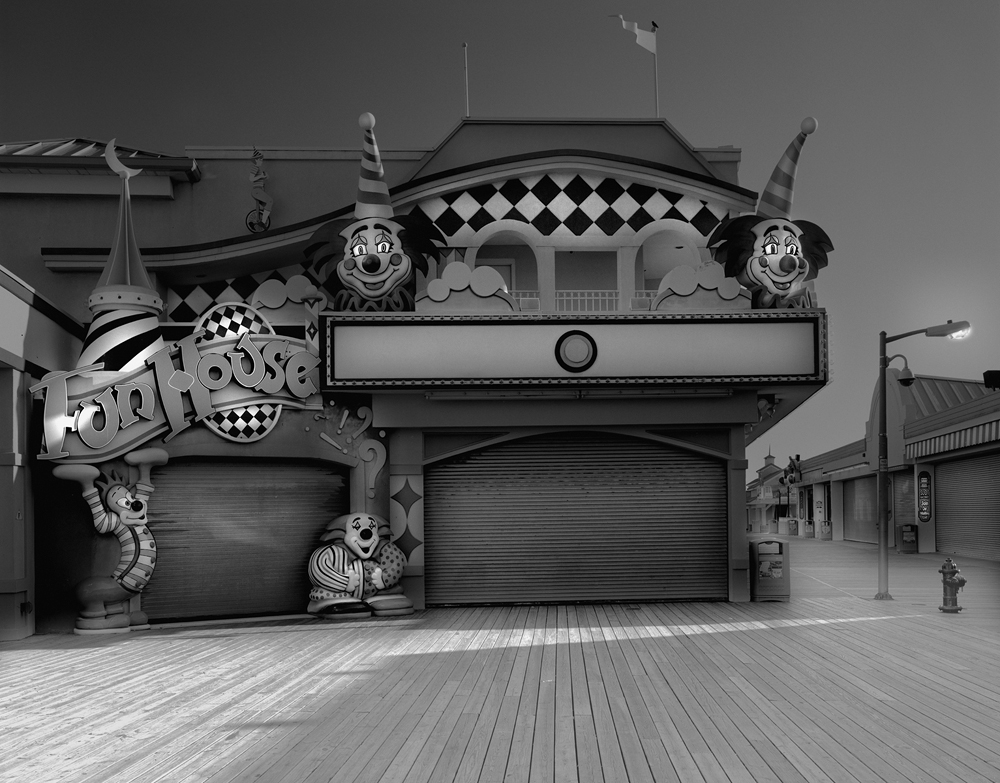 KW:  Are you a native of New Jersey or a transplant? If you moved to New Jersey, what brought you here.  If you are a native, what keeps you here?

MM:  I was born In New Jersey, and I’ve never lived outside of the State.  It’s hard to say what exactly keeps my here.  I think a good deal of it is simply that I’m a person who’s not good with change.  In many ways the areas that I grew up in have changed so much, that from a nostalgic/emotional point of view, I do feel somewhat disconnected from the areas that meant so much to me when I was younger.  I also think that from a creative point of view, having a consistent level of familiarity with your environment tends to help in producing some of the most honest and meaningful work. 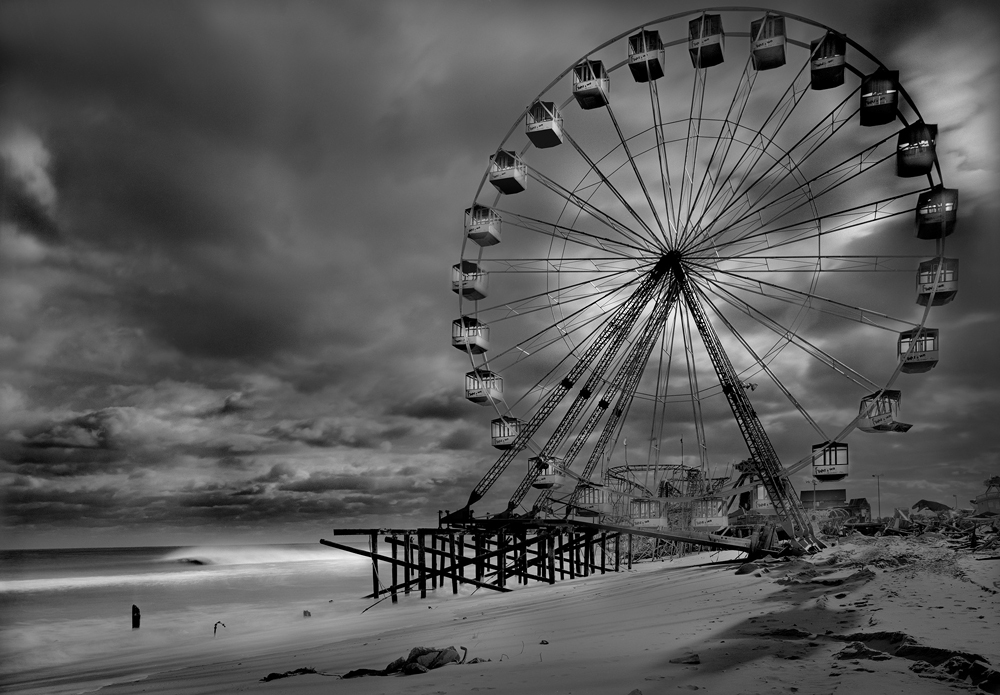 KW:  In the aftermath of Sandy, your choice to photograph the New Jersey seaside in such a beautiful and haunting manner seems oddly prescient.  Were you still in the process of working on the project when Sandy struck?  What was it like to return?

MM:  It was a strange series of events.  I started working on my “Afterlife” series in 2008.  My intention was to document the area in the way a person would document something when they knew it was going away for good.  For a number of I reasons I felt the need to say goodbye to this particular area that I grew up in, and I did feel like it was on the brink of vanishing for good.   I did the majority of the series in 2009 and 2010.  When Hurricane Sandy hit in 2012, everything was destroyed.  The entire town was under Marshall Law.   My family lives in Seaside Park, and my Uncle was the Town Electrician for Seaside Heights, the neighboring town.  During that period (because my family and was from the area), I was able to capture the aftermath of both the Casino, and Funtown Piers.  While I was disturbed by the destruction, I could’t help but be inspired by the tragic, yet almost operatic ending to the series, caused by the Hurricane. 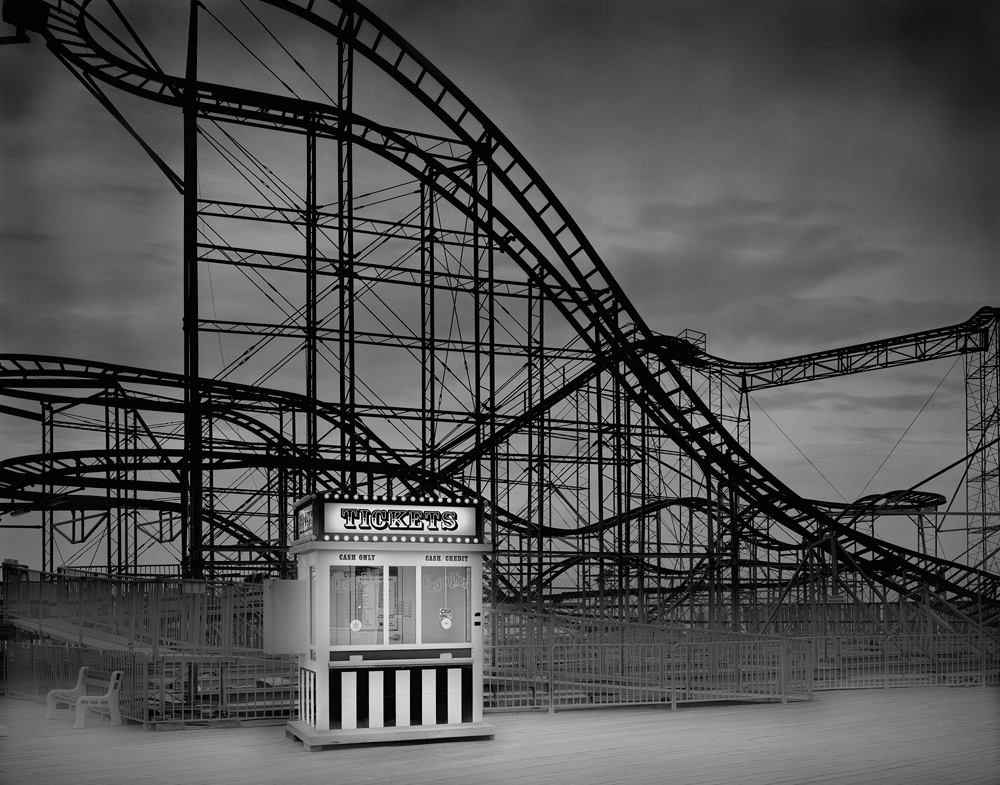 KW:  The figures in your sheep meadow series have the heroic quality of angels in a Renaissance painting. Can you talk a bit more about your process in making this work?  When you began making the photographs did you plan to “burn in” the surrounding areas or did this come later in the process?  I know you often photograph with a large format camera – did you make these pictures on film or did you shoot digitally in order to be a bit less noticeable?

MM:  Thank you for what you said in your first sentence.  That means a lot to me.

I always wanted to create a series of portraits of people, but I never really could relate to portraits of people when the subject was an active part of the process.  In my view, once the subject and the photographer are working together, the honesty leaves the room.  With that being said, the one thing I always loved about studio portraiture was the technical perfection.  In many ways with my “Deep In A Dream-Sheep Meadow” series, I wanted to capture people in a completely unaware state, but try to apply the technical perfection that can be created when the two parties are working together in a studio.  The Sheep Meadow in Central Park seemed like the ideal place to try and obtain this.  Imagining people in all different positions, different expressions, and then spending hours and days waiting for those things to happen in reality was very exciting.  Capturing the honesty in peoples faces and positions when all the artifice was released (in the middle of a city where there is no shortage of artifice) was really what I was after.  Like you said in your question-I wanted the images to have a “heroic” quality.  I wanted them to be beautiful representations of the subjects, without approaching anything that could be construed as gaudy.

I took the first image from that series in 2006.  Every year following 2006 I would print them darker and darker, until finally I found the aesthetic that made them really come to life.  That aesthetic was the process of burning in the surrounding grass to create an almost suspended and isolated subject.  In 2014, I started printing them vertically and backwards, which seemed to create an even more exciting look, especially with couples.  The vertical and backwards orientation seemed to line up perfect with the feeling and mindset that certain subjects were radiating.

I used different cameras throughout the years to capture these.  I initially used a Sinar f 4×5 film camera, and briefly used 6×7 film camera, and I also use a medium format digital camera with a strong speed light.   No matter what camera I use I still handmake all of the prints as split toned gelatin silver contact prints in a wet dark room.  When I use a digital camera, I’ll create a series of contact printing negatives/internegatives from the digital files.  As with all of my series, I do all the work myself, and outsource no part of the process. 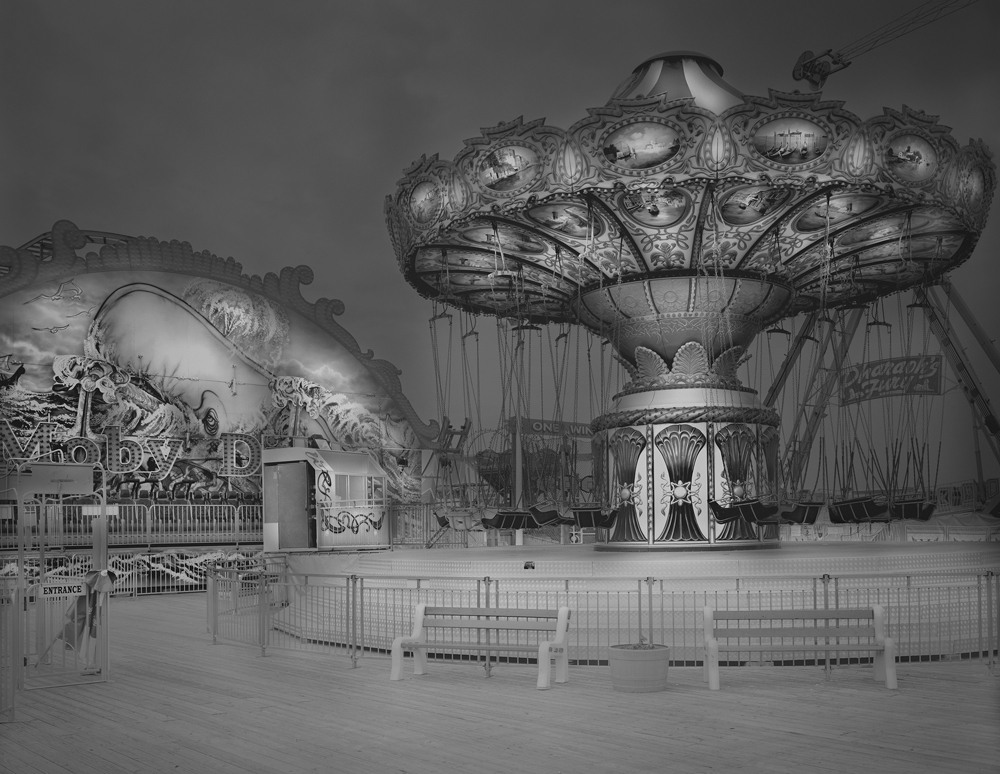 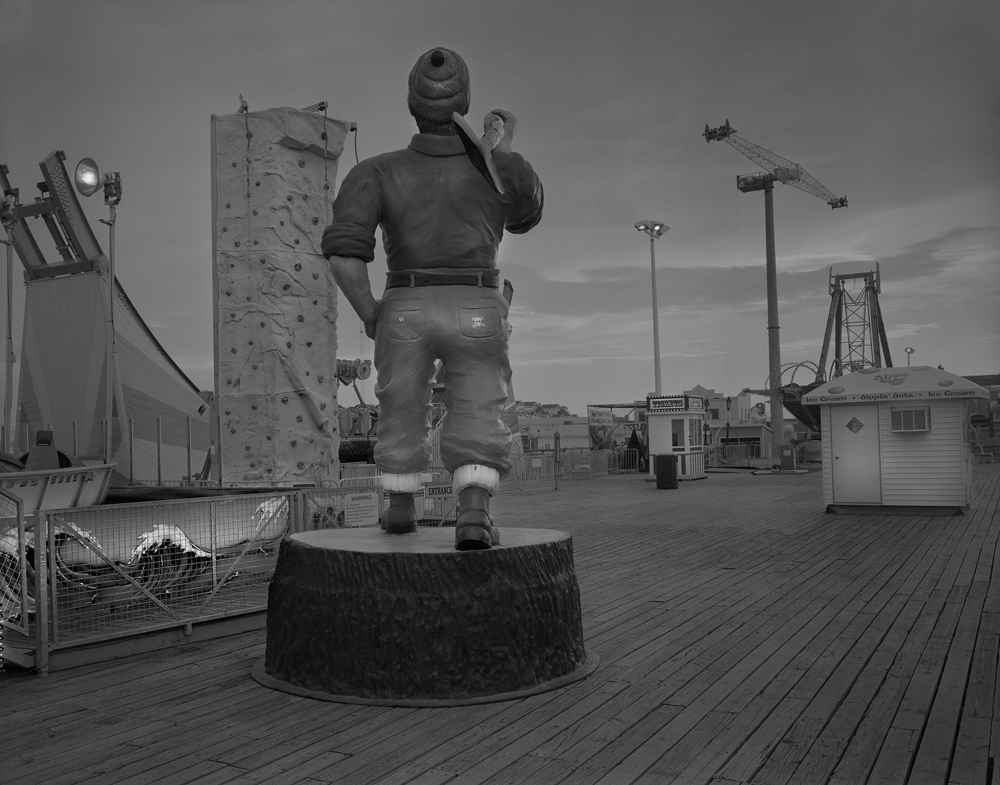 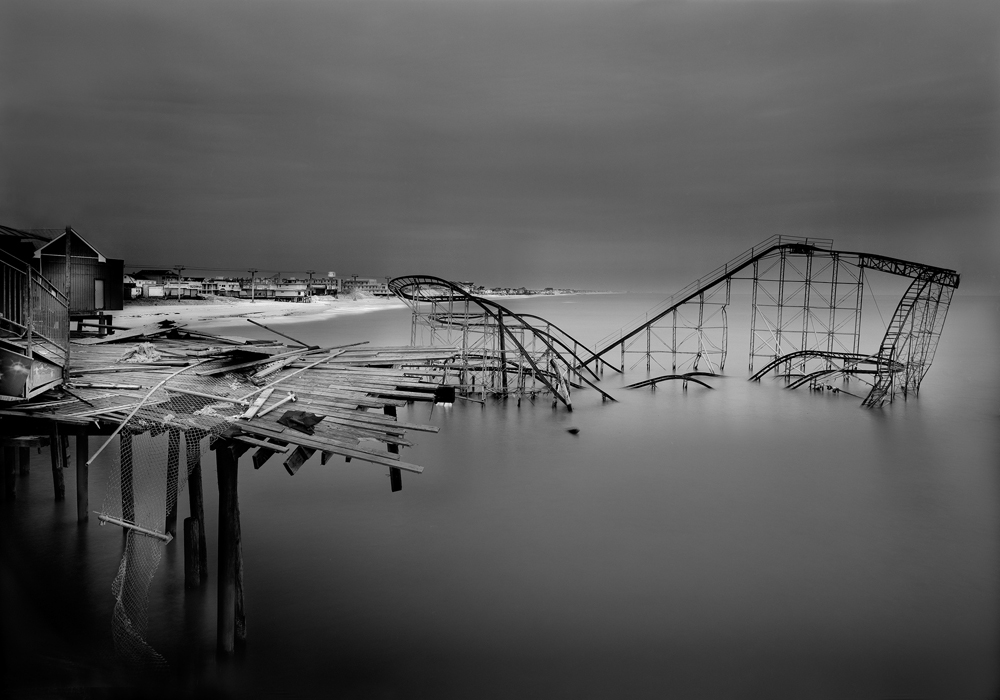 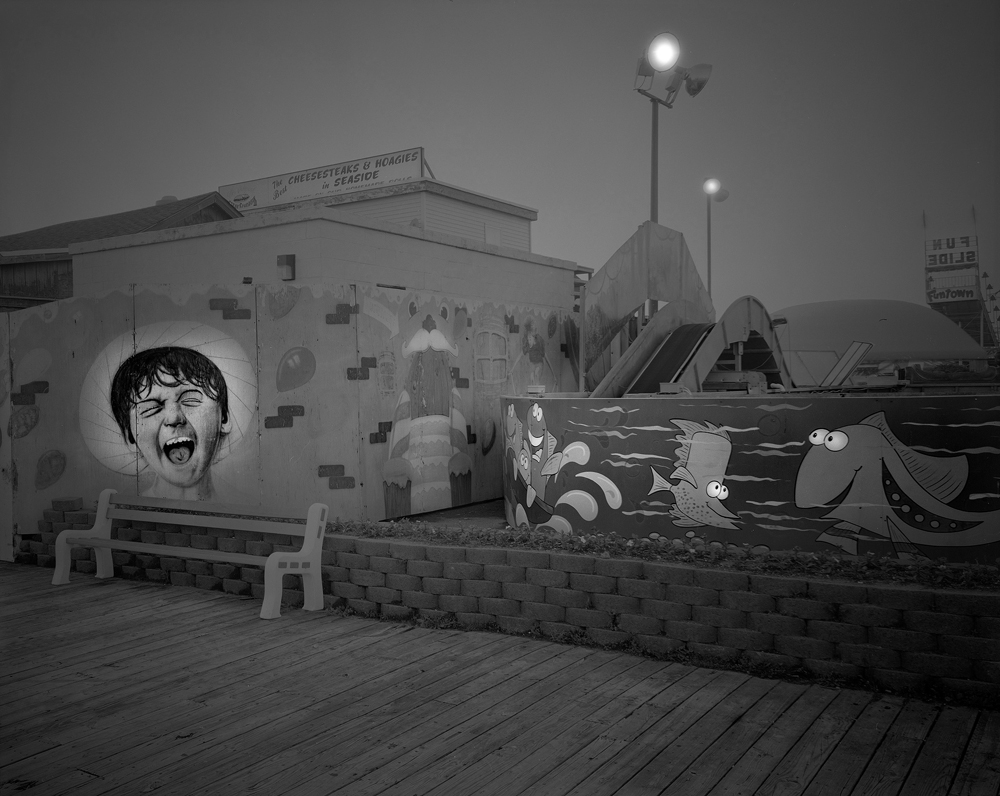 In 2014 I began capturing individuals and couples laying in Central Park’s Sheep Meadow and began printing them vertically and backwards.  This seemed to heighten the mood of the subject, creating an almost anti-gravity detachment & surrender from chaos of the surrounding city.

I never could relate to contrived portraiture, but I desperately wanted to find a way to capture people on film and in print with the perfection of studio shots.

My intention with this project was to capture people in what I considered to be perfect unassuming poses (poses that could never be posed). I shot all of the images very close to the subjects while they were sunbathing or sleeping in Central Park’s Sheep Meadow (usually only a few feet away) and would simply wait for the moment when the subject appeared to completely surrender to their environment.  Not having the luxury of communication with the subject, I was forced to be extremely patient in order to obtain the results I was hoping for.

I hand make gold toned silver gelatin prints for all of the images where the surrounding grass is severely “burnt in” to isolate, and give the look of suspension to the subject. The majority of the images were created in central park’s sheep meadow, while a few were created in other small parks in the city. – Michael Massaia 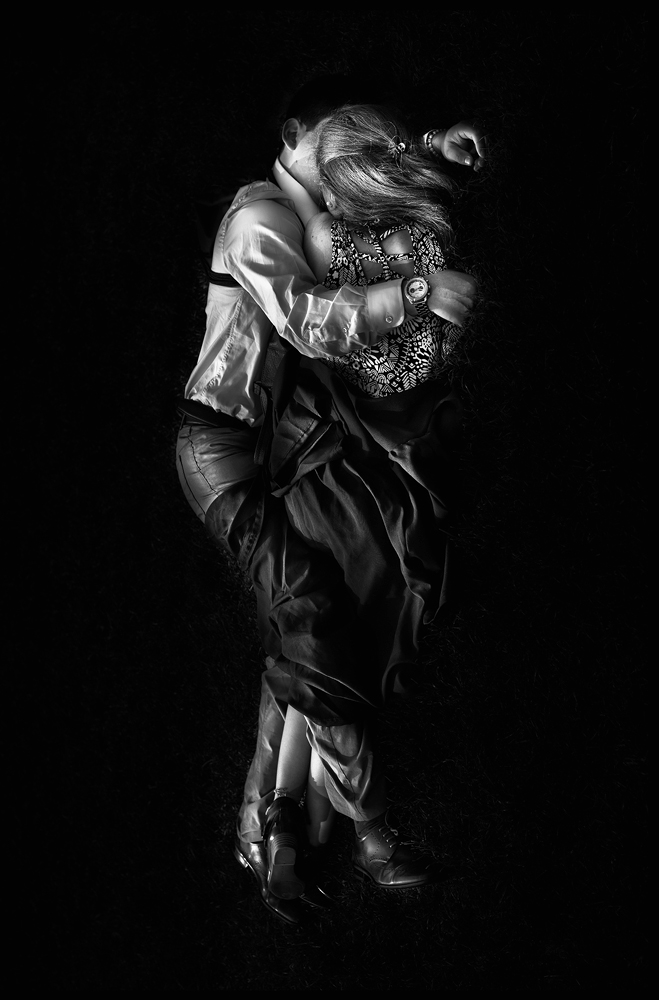 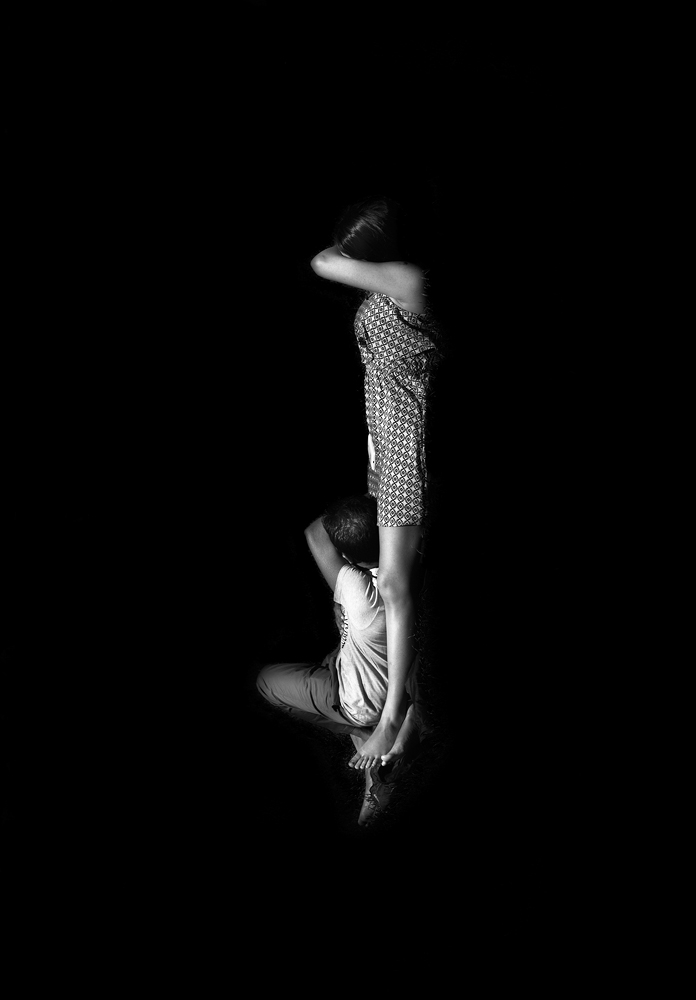 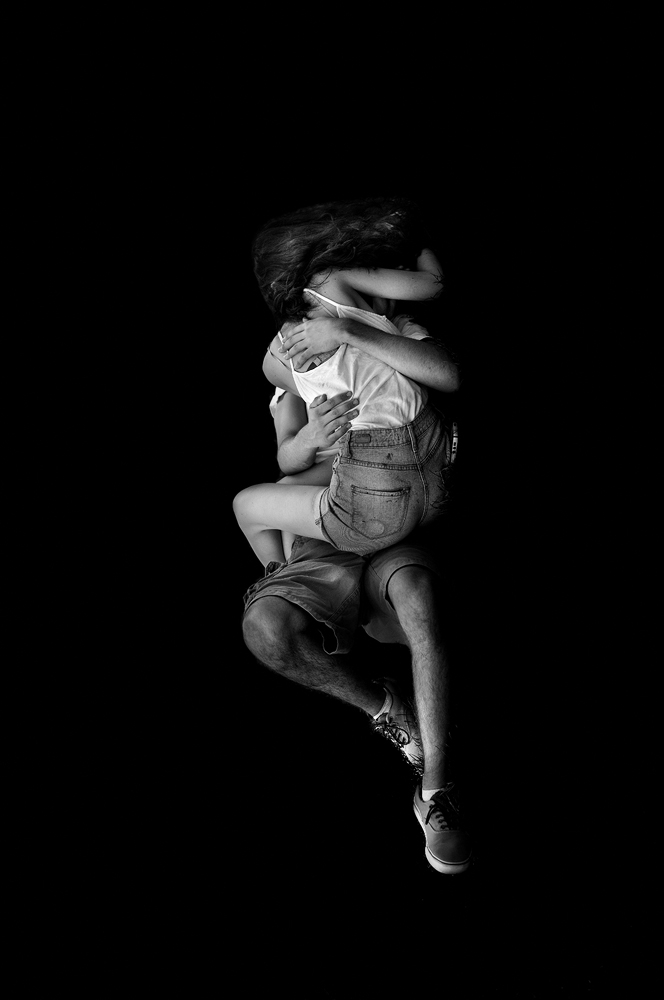 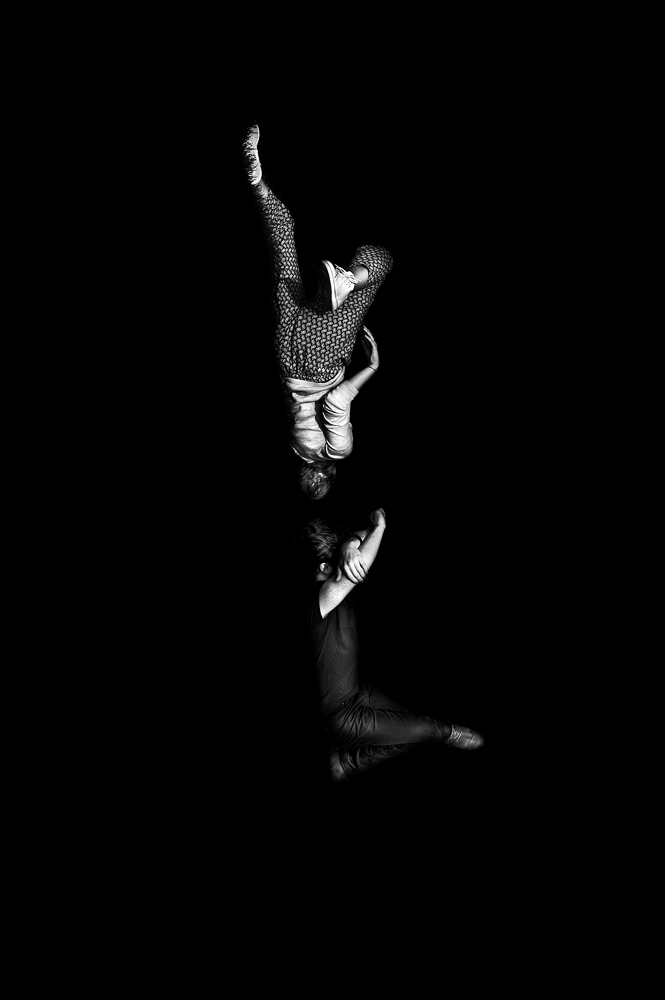 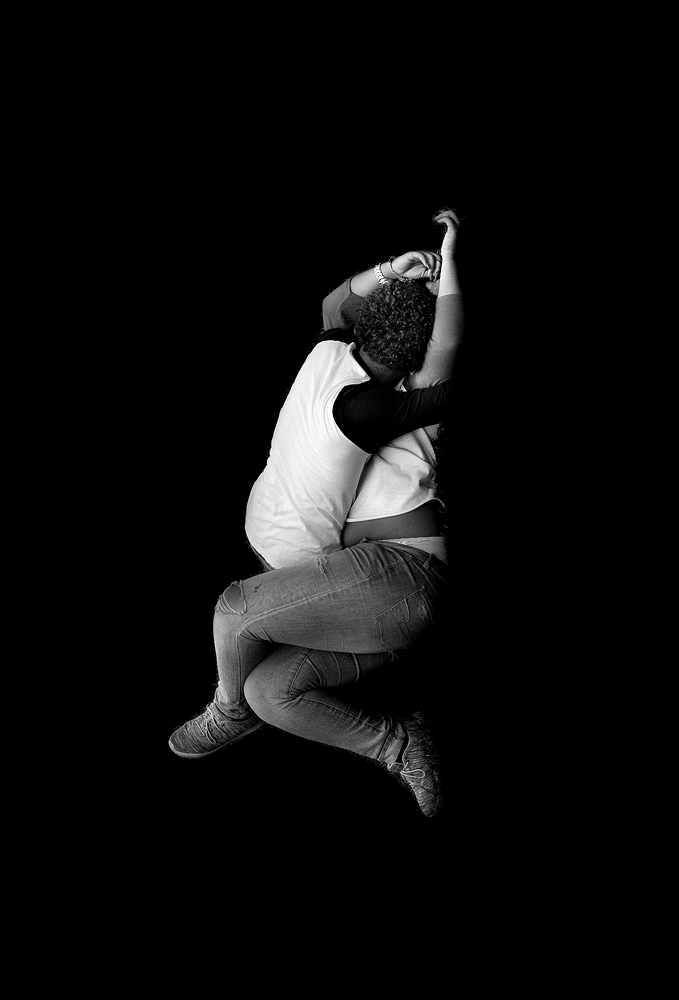 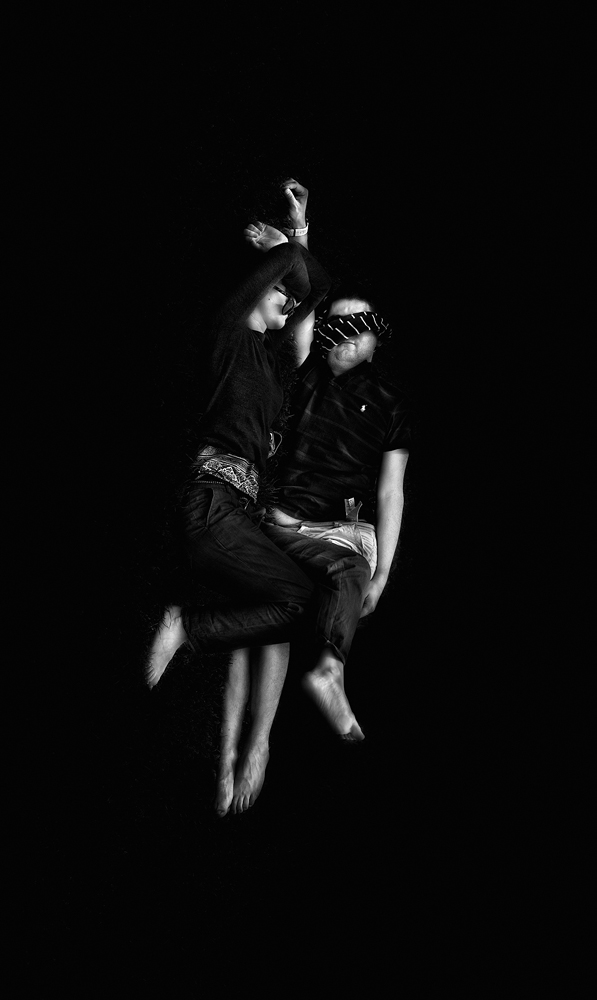 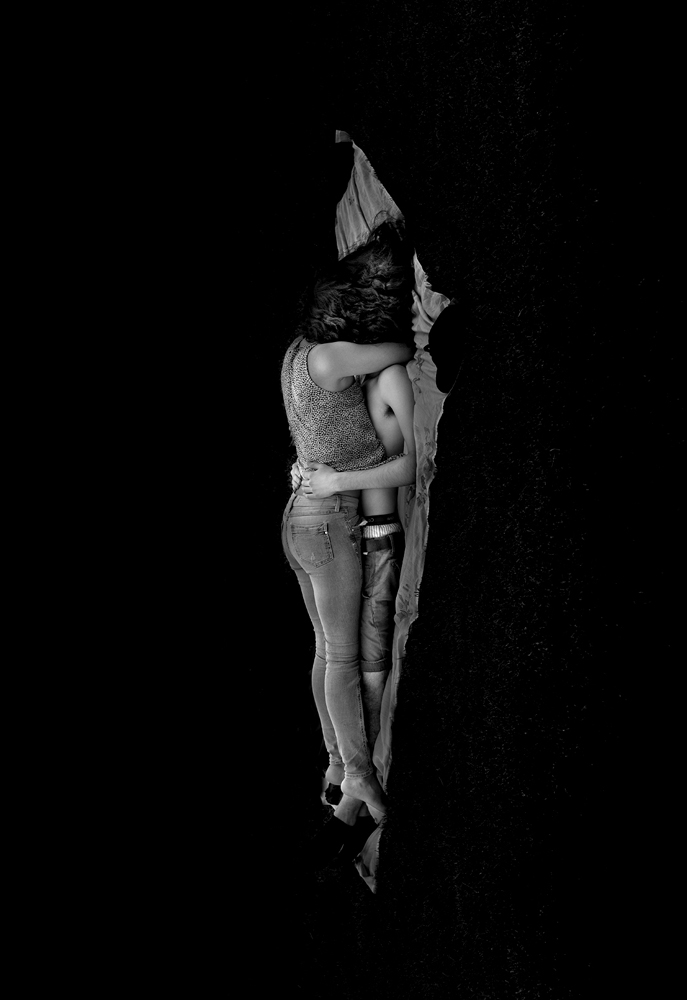 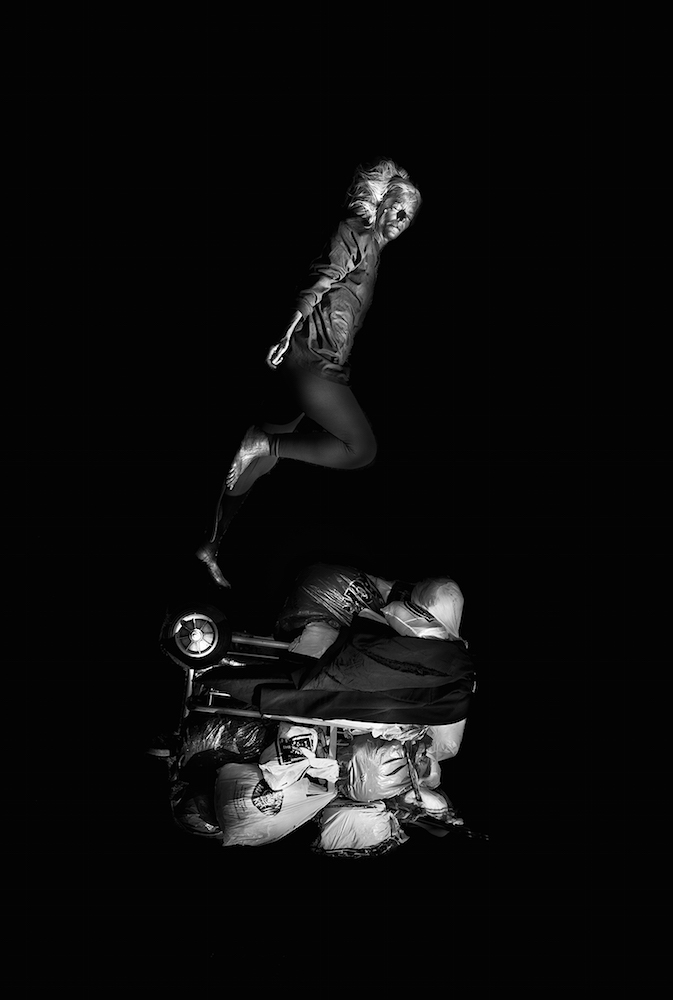