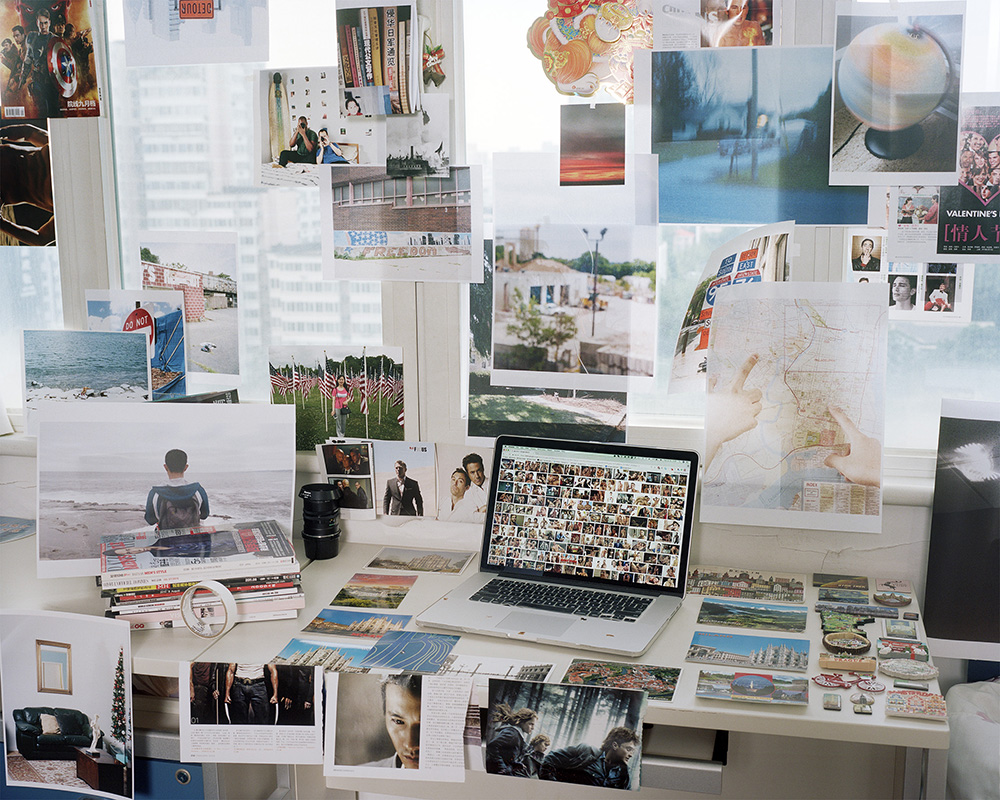 An interview with Guanyu follows. 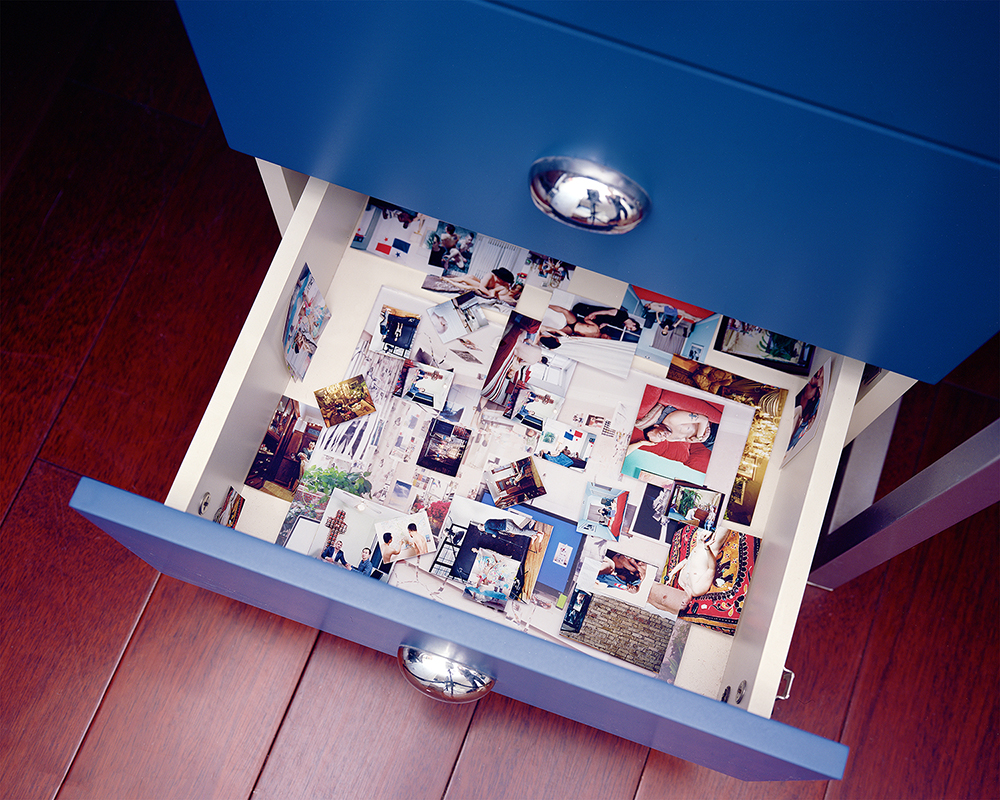 Influenced by the production of ideology in American visual culture and a conservative familial upbringing in China, my practice extends from examining the production of power in photography to the question of personal freedom and its relationship to political regimes. I negotiate this from my perspective as a Chinese gay man. In my work, I migrate between media like photography, new media, and installation. The migration and shifting of media in my practice operate similarly to my displaced and fractured identity.

In Temporarily Censored Home, I covertly situated photographs in my teenage home in Beijing to queer the normativity of my parents’ heterosexual space. These images taken in the past four years consist of portraits of me and other gay men in their domestic settings from my project “One Land To Another”; prints of my artwork made in the U.S.; photographs of landscape and built environment taken in the United States, Europe, and China; torn pages from film and fashion magazines that I collected as a teenager; images from my family photo albums. Through positioning and layering images, I aim to juxtapose, contradict, and collapse space and time, disrupting my teenage home. It bridges the relationship between personal and political in the context of both China and the US. Even though these installations were not permanent, I reclaimed my home in Beijing as a queer space of freedom and temporary protest.

These non-hegemonic interventions in my parents’ home not only capture the disruption of the norms of sexuality, cultural hegemony, and nationalism, but also create constellations of differences, comparisons, and contradictions. This allows me to convey my ceaseless search for a better place in both China and the U.S. I offer my contemplation on the formation of identity in my past, criticism of present political climate, and hopeful desire for the future. Is it too difficult to think about the co-existing presence of differences? Can we jump out of our comfortable borders, the borders of sexuality, race, and nationality? – Guanyu Xu 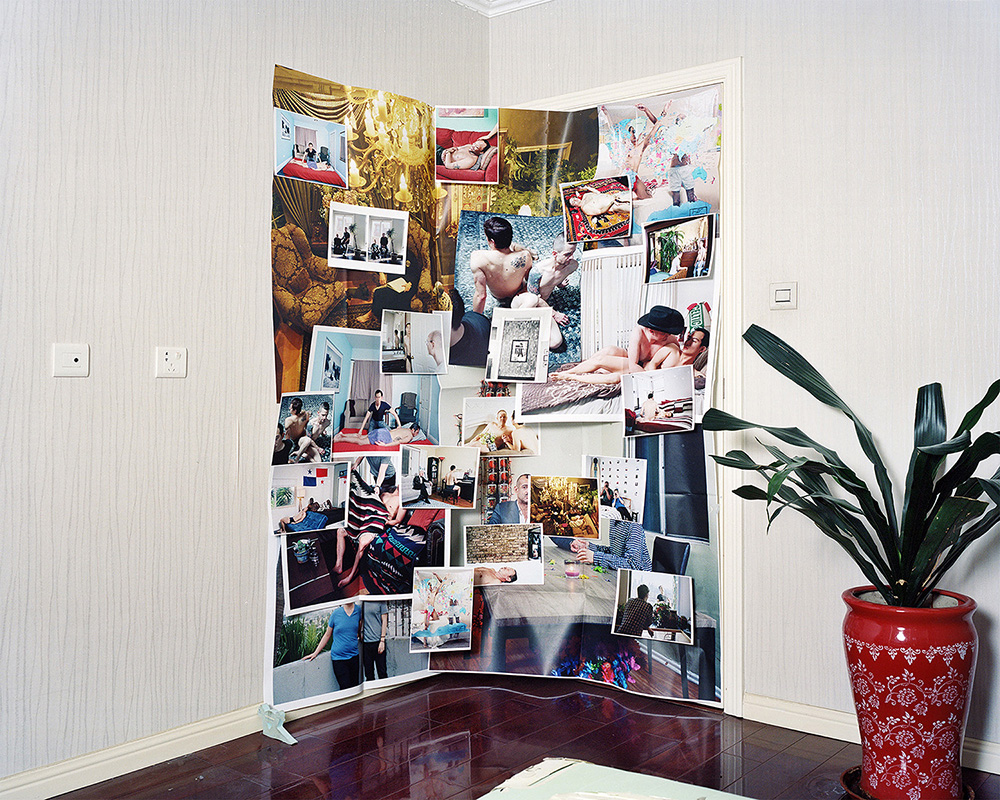 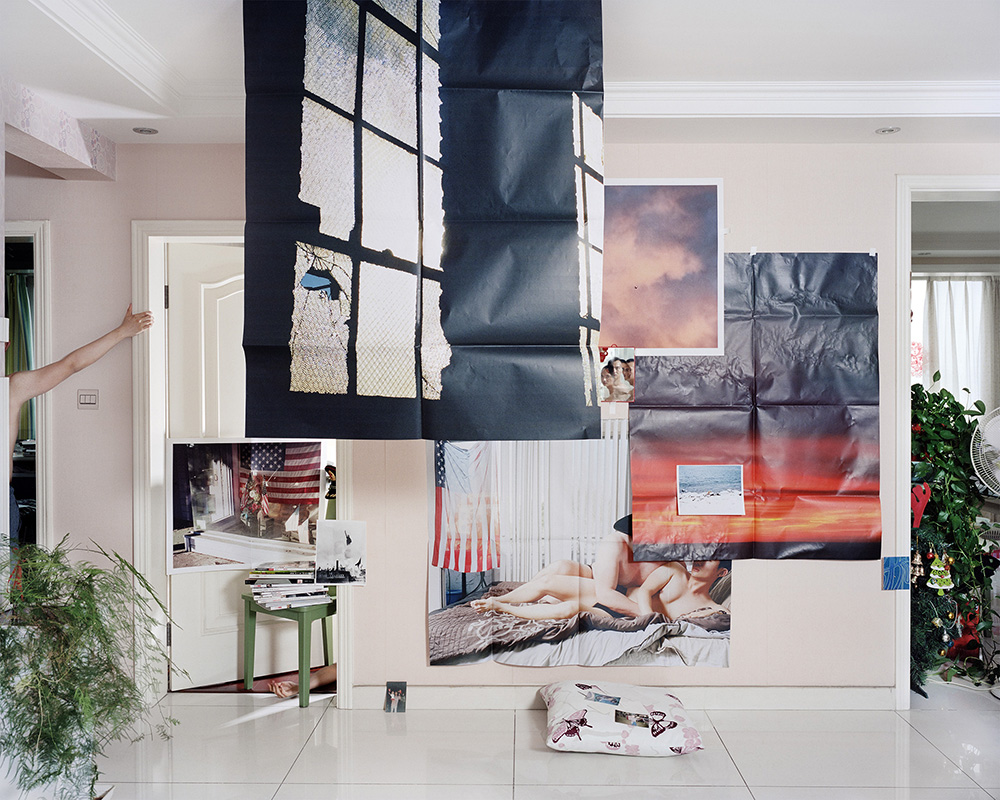 Hi Guanyu! Thank you so much for taking the time to speak with me about your incredible body of work, Temporarily Censored Home.  How and where did this work begin? Is the work finished or is this an ongoing series of images?

Hi Brennan, thank you so much for the opportunity to let me talk with you and Lenscratch. I think the project is still ongoing.

There are many things made me start this project. It was inspired by Sara Ahmed’s book Queer Phenomenology that I read three years ago. It made me think about the material nature of images as well as how space can form one’s desire and identity. The project is also about the inability in a conservative social environment and familial relationship to communicate my sexuality with my parents. Until now, my parents still don’t know I’m gay and they don’t know what kind of art I have been producing. I have also been thinking about how I can comparatively examine the systems of oppression on personal freedoms in both China and the US. 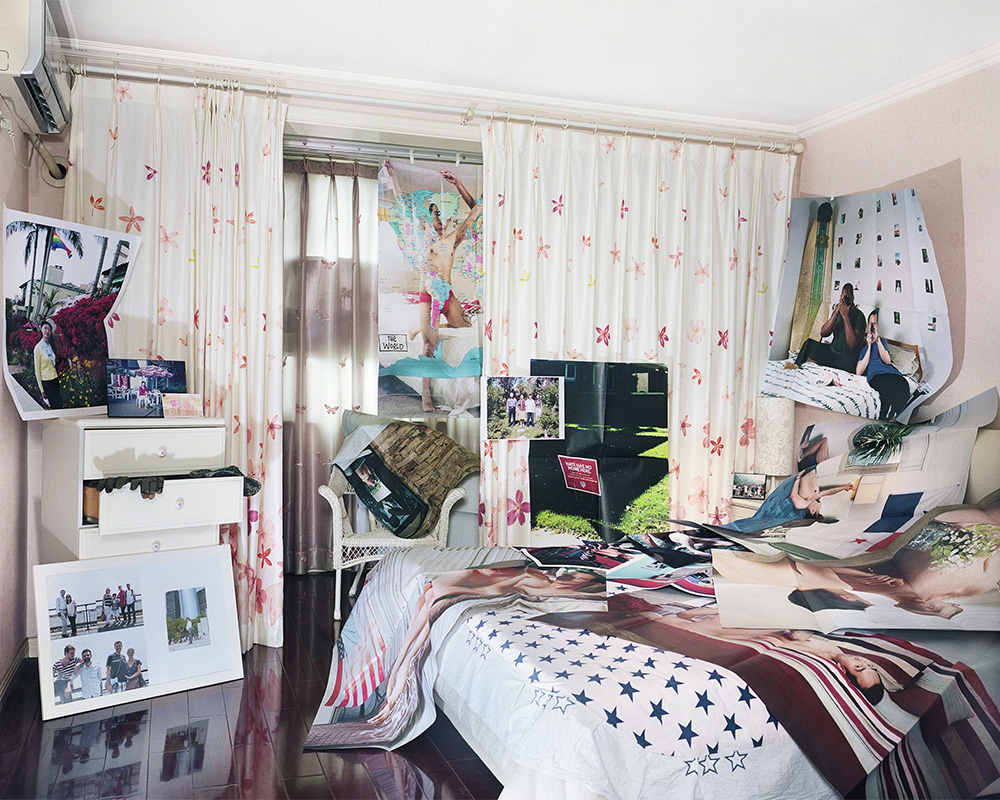 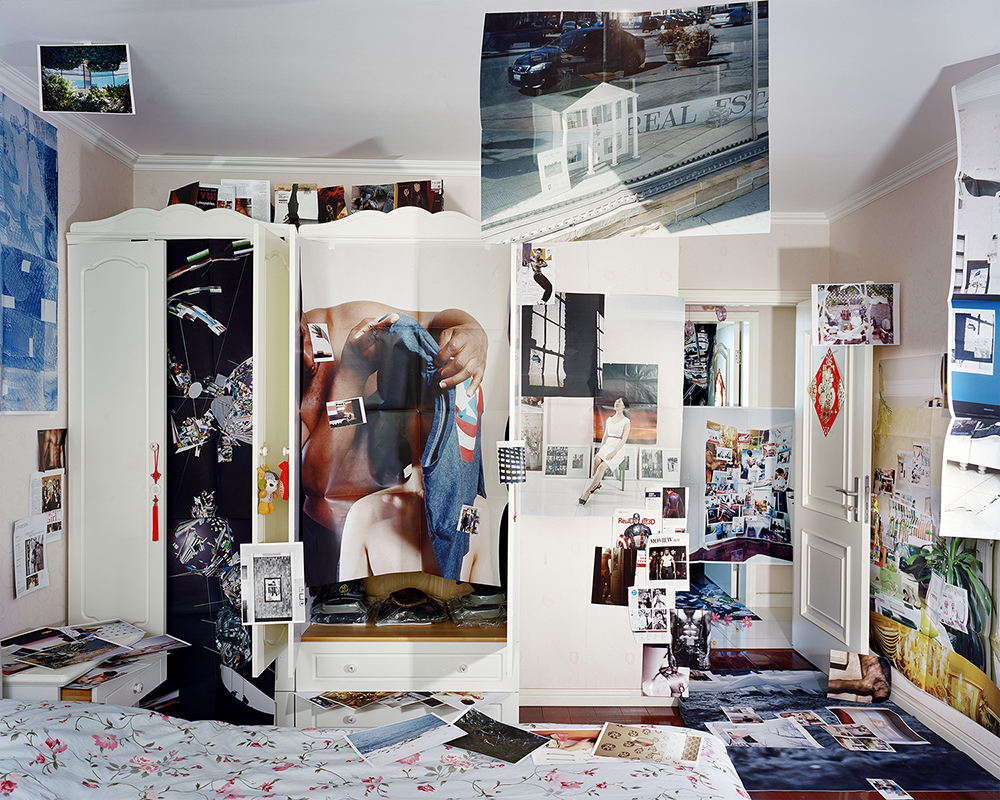 I really love the way you’re thinking about physical space in your images. There’s one where the temporary installation is built on the back of the door, and if that door was opened it would be destroyed. How does the temporary nature of these installations work in conjunction with the permanency of making the images themselves? Do you ever wish you could keep the installations up for longer?

I think the tension of the temporary installation is crucial for this project. It’s about testing and pointing to the boundary of personal freedom, specifically thinking about what is “normal” to be existing and what is not. Through creating these temporary installations, I push what is suppressed and invisible to make that visible.

When making these installations, I paid attention to the meaning of the specific space. For instance, in Behind My Door, I want to directly communicate the concealment of my artwork. By installing the photographs within the shape of the door, I was thinking about if my parents open the door they won’t be able to see these images. It’s kind of like in teenage years when I look at movie magazines in front of my parents but I was secretly desiring those male actors. 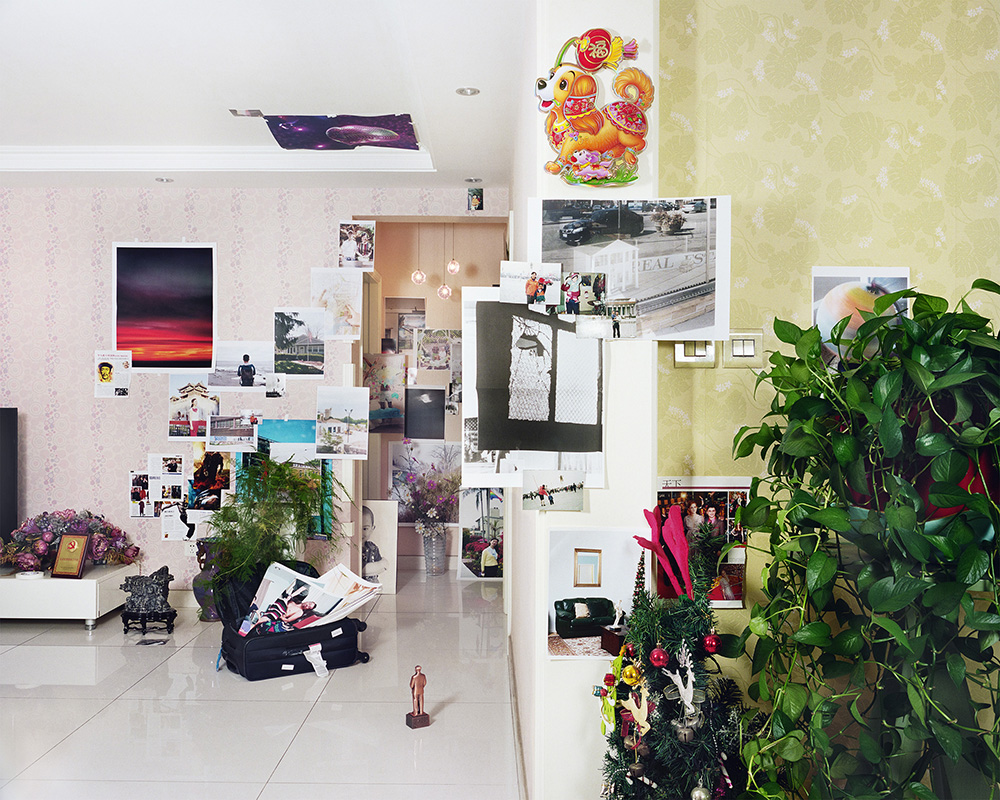 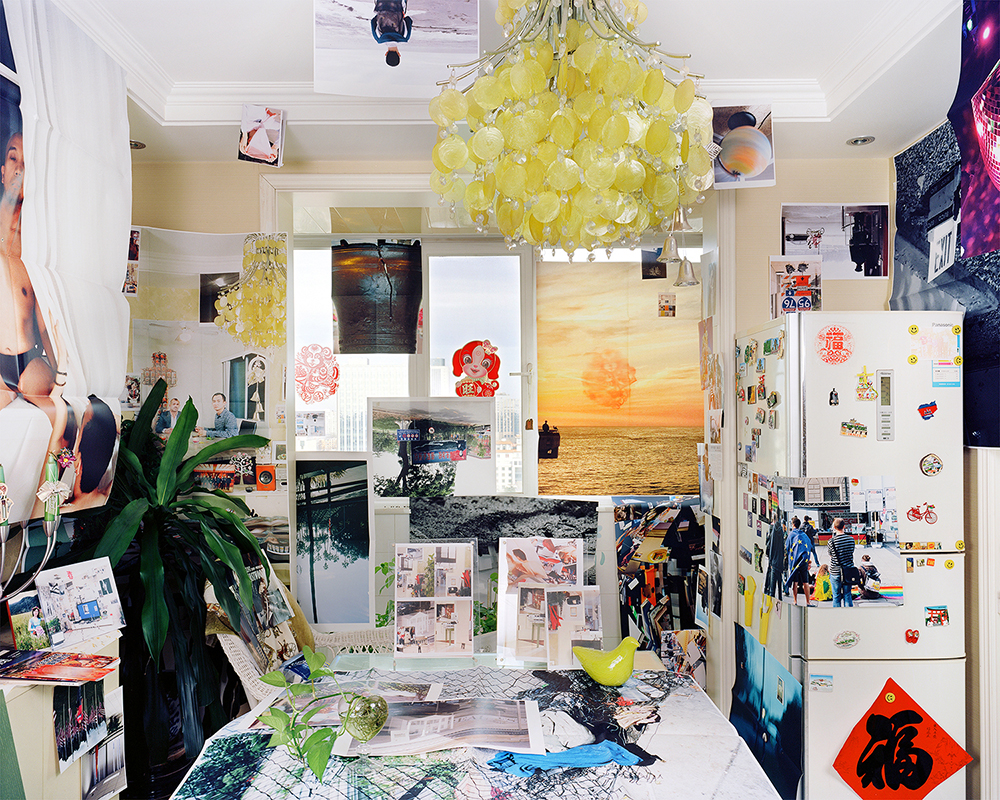 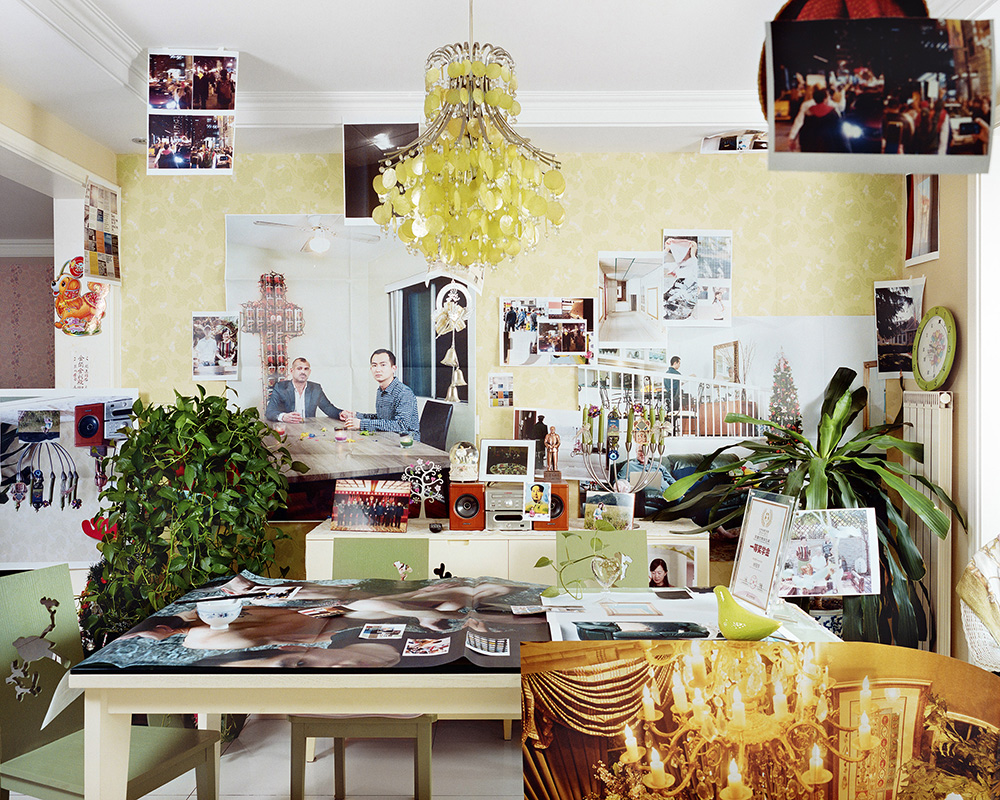 Looking at the work you’ve made before Temporarily Censored Home, it really seems like these images are a real culmination of the physical image practices you’ve been working with as well as the conceptual themes from other bodies of work. I see references to Failed Remedy for Ignorance, and One Land to Another. How does the completion of those bodies of work inform the work you’re making now?

I think it’s really important for me to understand images critically. Influenced by the Western image culture while I grew up, I was particularly attracted to “America”: its lifestyle, landscapes, the idea of freedom and democracy, and gay culture. After studying at art school in the US, I became highly aware of the production of ideology and power in the image. My work One Land To Another is a long term project that is using staged portraits to examine the intersectional experience of race, sexuality, and citizenship. It provides alternative gay male relationships that are seldom found in the mainstream (gay) culture. Re-situating this examination of a system of oppression back to my home in Beijing, the two worlds clash and I am able to express my dilemma of living in both places. In this way, I’m hoping to question both societies and providing a suggestion that there should be a collective change from a transnational perspective.

Failed Remedy for Ignorance is more a studio work and it definitely examines image itself. Through analyzing news images of the debate of nuclear war in September and October 2017 from different media outlets, I created an installation to express the overwhelming feeling of the inability of obtaining truth from media. The contradiction of pushing myself to learn about the event through media and the expressive form of the work questions the media spectacle that disguises the truth instead of giving power to the masses. It’s about understanding image itself as well as the manipulative action behind the use of the image by political power. Of course, this work paved my way to produce Temporarily Censored Home. 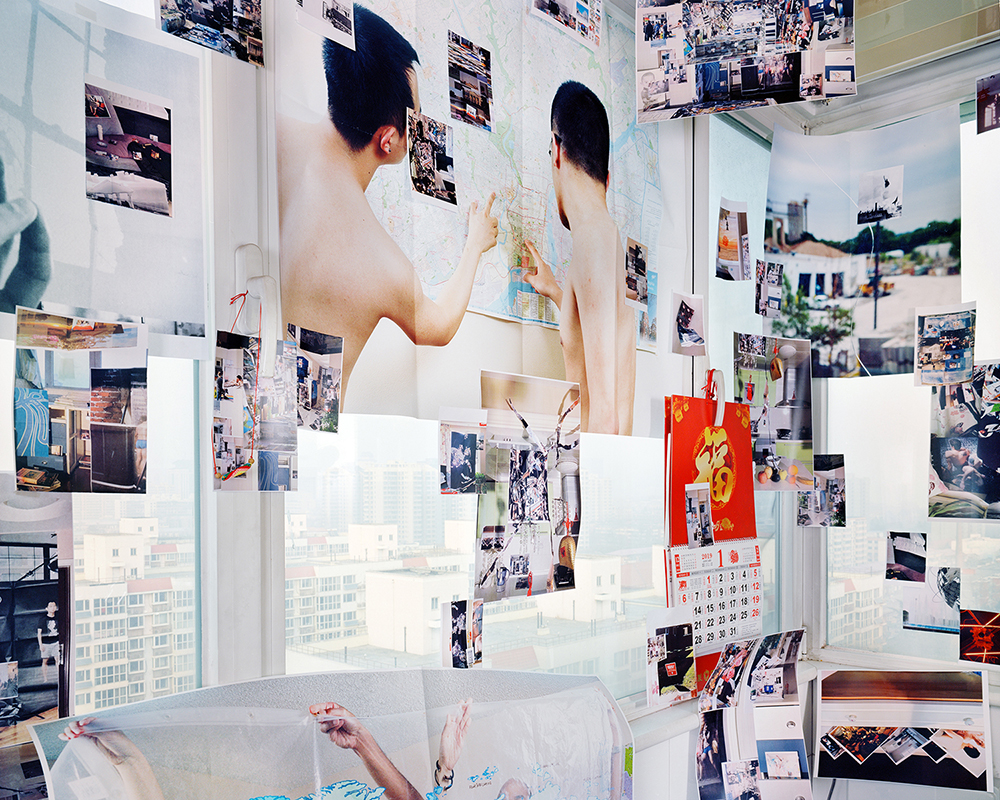 I know you’ve had some exciting reactions to this work, resulting in exhibitions, grants, and residencies. Being a queer artist, how do you navigate the Art world in finding places that you know will be open to supporting work like yours? Especially when it comes to applying to those kinds of things.

As an international student, I started really early to submit my work to different places. This is something I have to do if I want to apply for the O1 visa in the US. There are many places that are really supportive of a wide range of practices. Lenscratch is definitely one of them. I think to work on intersectional topics really gives me more choices to submit to different exhibitions or publications because it’s definitely important to submit work starting with opportunities that have a specific theme instead of just a general open call. I submit to so many calls and get so many rejections.

For myself, I think since I have received too many rejection letters, I’m already desensitized. Also, it’s better to focus on research and making than thinking about rejection. 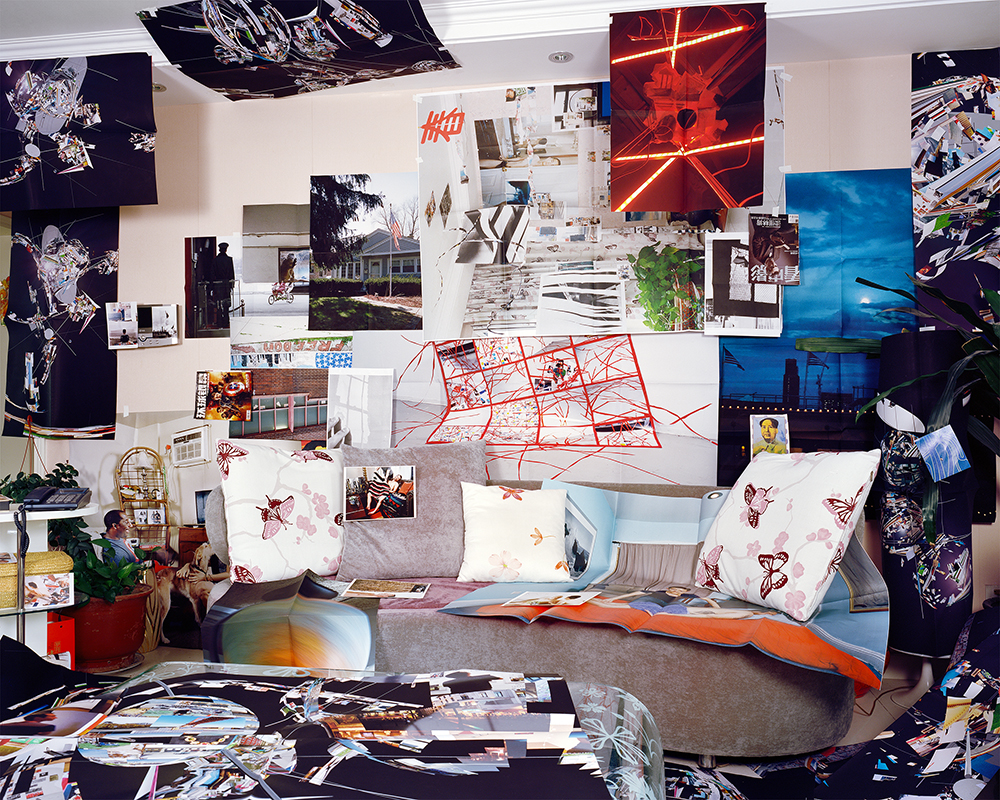 How has your experience at SAIC changed your photography practice? What kind of influences and resources do you have there?

It’s an expensive interdisciplinary art school that has huge resources in terms of visiting artist lectures, facilities, peers, and professors. It influences me a lot in working and thinking. I have taken classes across different departments like sculpture and video. I’ve been in SAIC for so long, four and a half years. There are just so many things that have influenced me. It would be unfair to only list some of them instead of all of them. I think to learn across disciplines and to learn critically from humanity, social science, and Art History courses are so crucial to my practice.

If anyone wants to know more things about SAIC, feel free to get in touch with me. 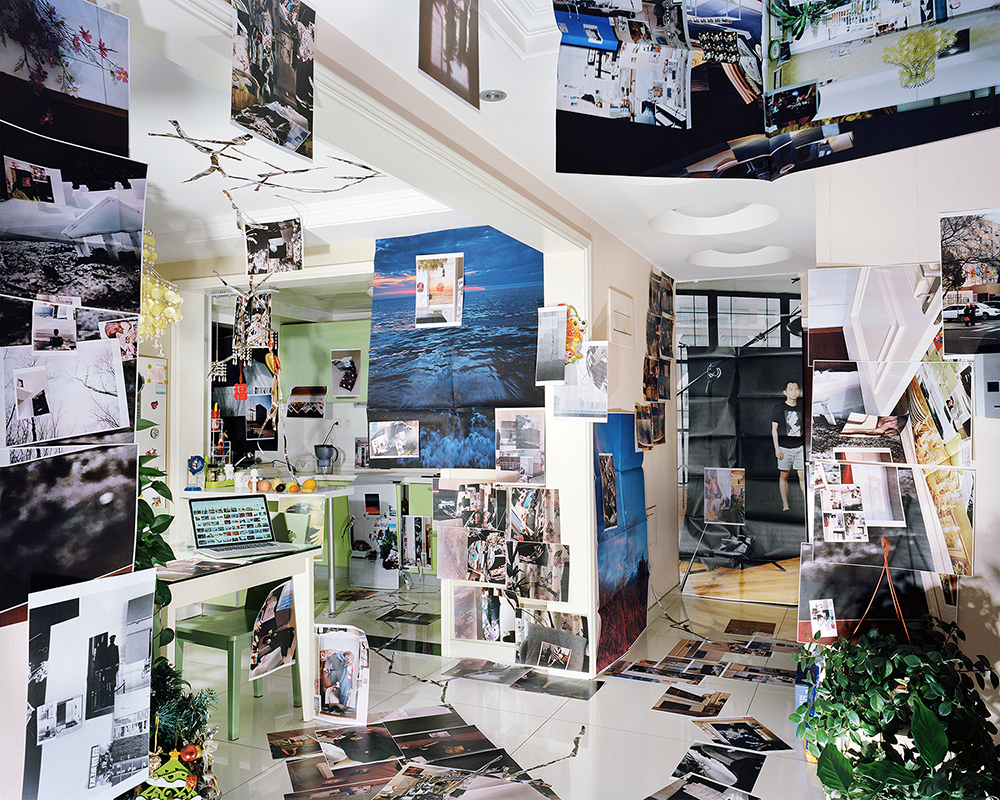 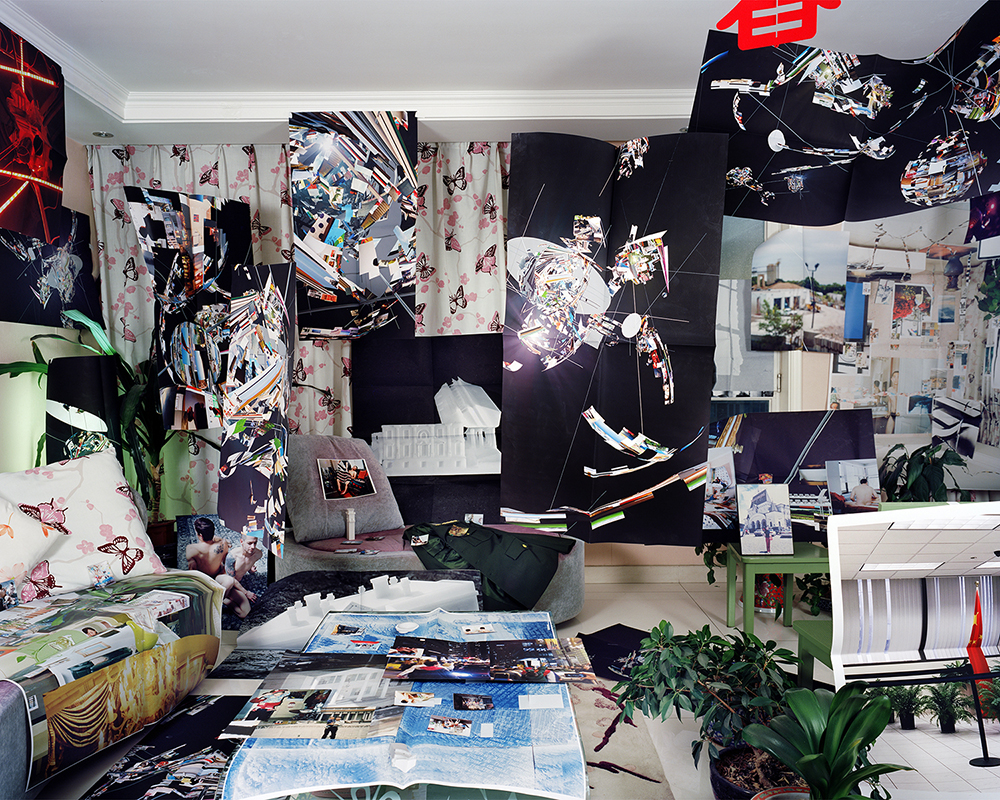 Now that you’re finishing up at SAIC and completing your MFA, what’s next for you?

I have applied for many artist residencies and fellowships and I have heard back from some. Hopefully, they will give me spaces and facilities to continue to work, so practically speaking I will have enough materials to apply for an O1 visa.

Yes. I’m mainly applying for residencies and post-MFA fellowships. I have been accepted by three residencies from June to September for now.  I will definitely be applying for the Lenscratch student prize.

I’m really nobody. You can find most of things I got selected on my website. I’m just hoping to go to free residencies or places with a stipend to continue to make work. I’m still waiting for residencies to make their decisions. It’s really a precarious situation for an international artist to figure out life during OPT time.

I’m also hoping to teach in the future. So I will start to probably find teaching positions soon. But I haven’t started yet. I know it’s quite difficult. 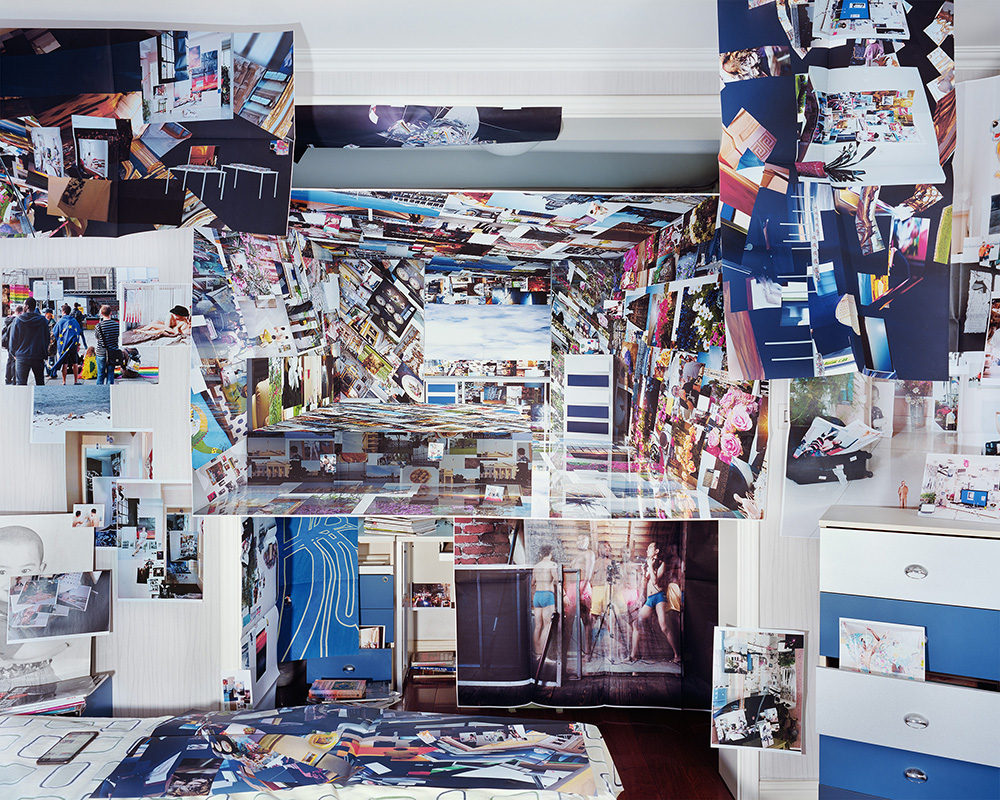 Thank you so much for taking the time to talk to me, and best of luck with what’s next for you! And also, congratulations to being on the Aperture Foundation Portfolio Prize Shortlist! What an awesome accomplishment.

Thank you so much again for interviewing me and thank Lenscratch for being a great platform for photographers! 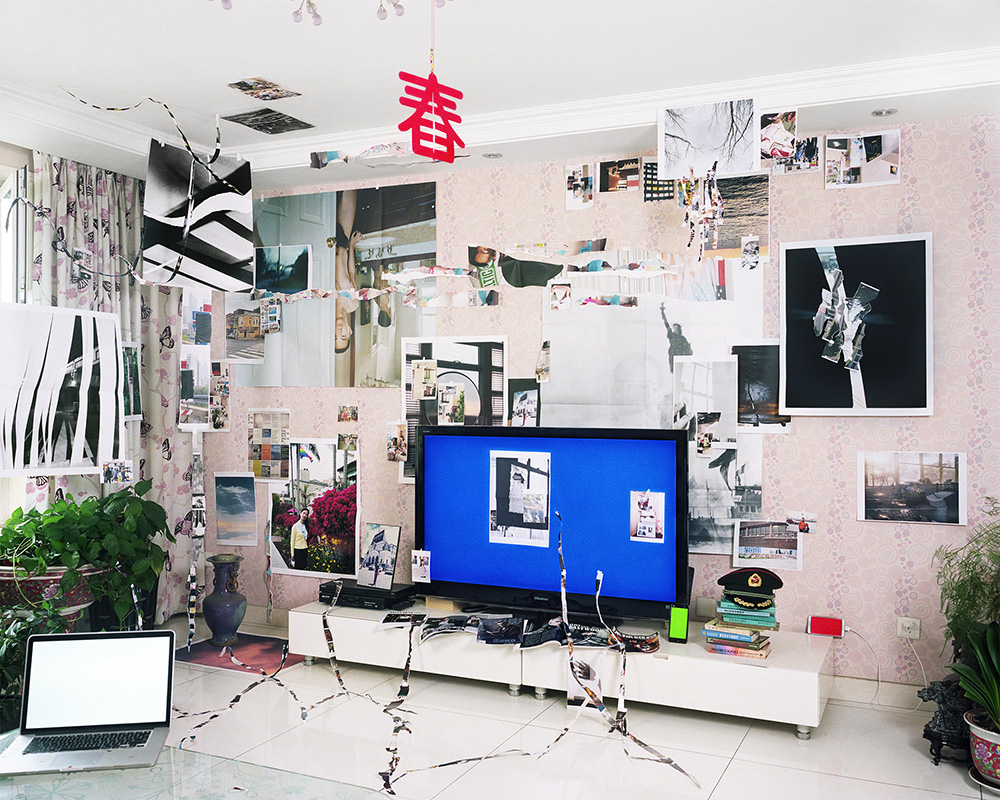 Keep up with Xu Guanyu: