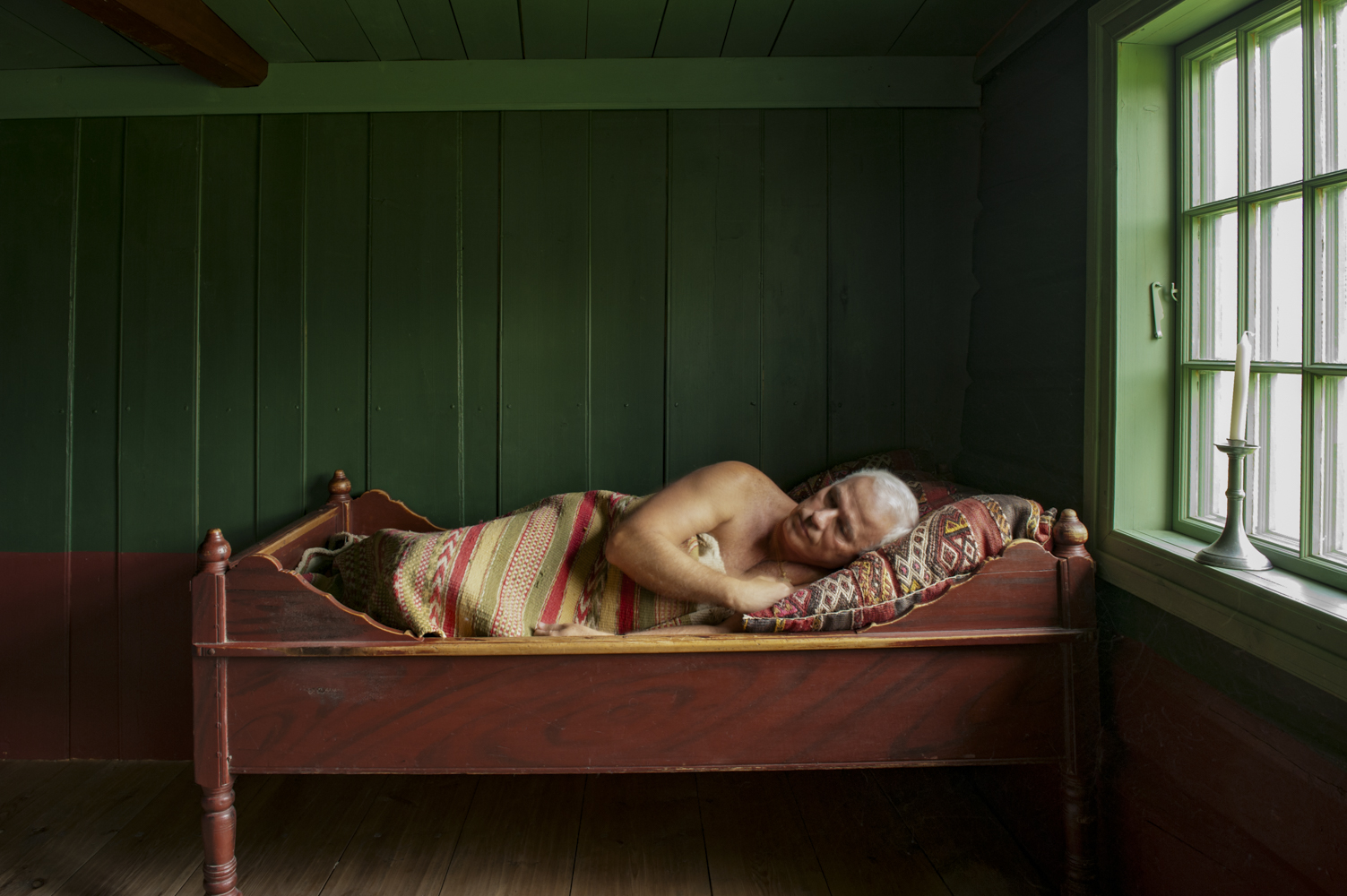 ©Michael Honegger, The Innocent Sleep, from My Human Comedy

This past summer, I taught a workshop at the Maine Media Workshops, filled with wonderful image makers who have now become my friends. One of the participants was photographer Michael Honegger who made the journey from Nice, France. He is erudite and worldly, with a great sense of humor and I thoroughly enjoyed spending the week with him. Michael is well-connected and well versed on photography in France and I asked him to share some of the contemporary photographers making work in his home country. But today, we start with Michael’s work, in particular, a terrific self-portrait project, My Human Comedy, that allows him to consider self and the complexity of being human.  An interview with Michael follows.

Michael Honegger is a visual artist born in Germany with a B.A. in History & Spanish from Duke University, a M.S. in Foreign Service from Georgetown University and a Professional Certificate in Visual Arts from Maine Media College. His practice as a fine art and documentary photographer explores the performative nature of self-portraiture, the complexities of memory and family and an investigation of the ironies of American culture with an expatriate’s eye. He has exhibited his work in numerous juried group shows throughout the United States and Europe including the Center for Fine Art Photography, Photo Place Gallery, A. Smith Gallery, the Southeast Center for Photography, and P.H.21 Gallery among others.
His documentary project on the refugee crisis on the island of Lesvos, Greece in 2015 was widely published in major European newspapers and by Amnesty International in their initial press release on the crisis. The Economist and The Guardian have also published his images. He currently resides in Nice, France and has lived in France for the past 14 years. 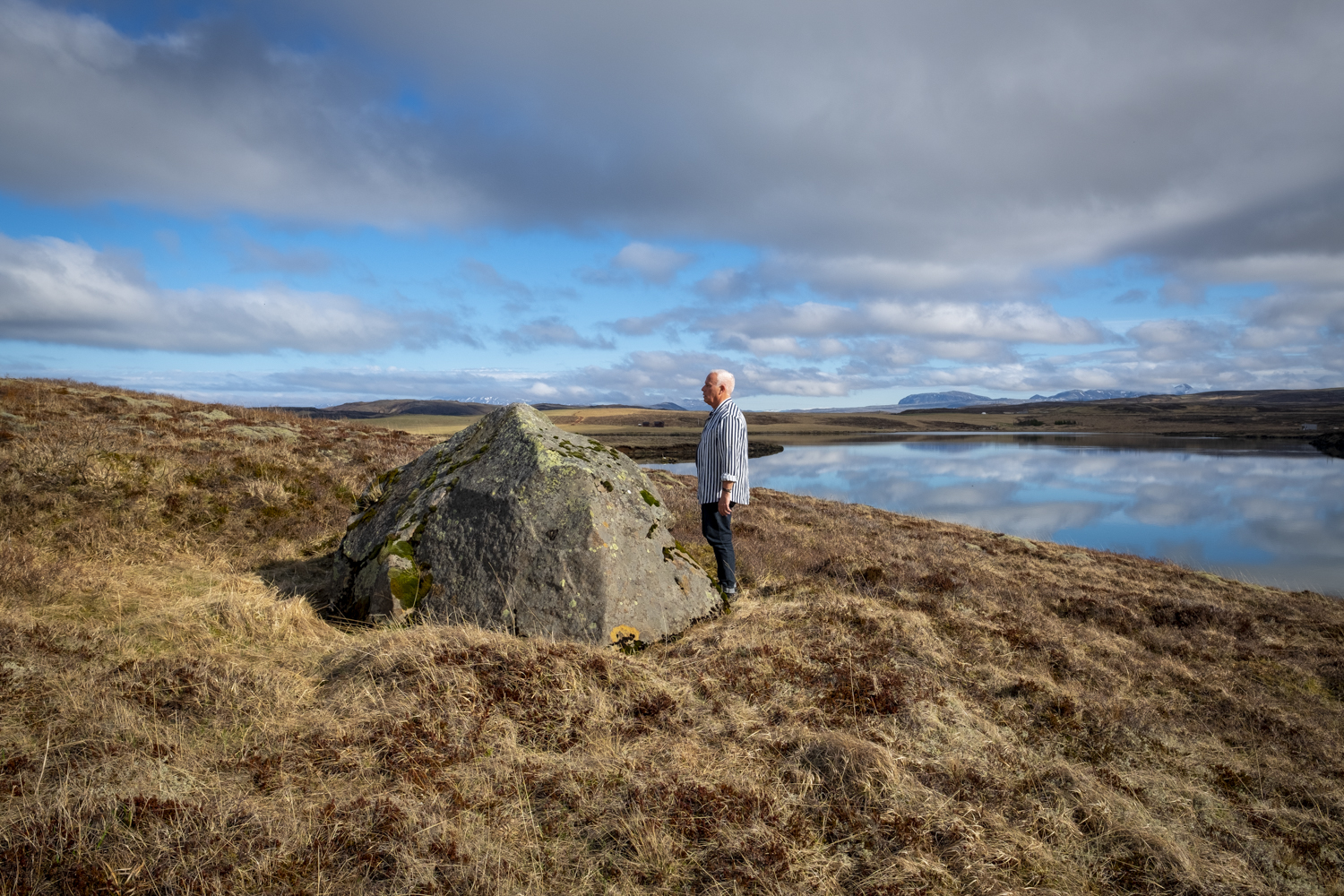 ©Michael Honegger, The Rock of Ages, from My Human Comedy

This project explores the psychological and social aspects of my identity through the photographic medium of self-portraiture. The series is a reflection of the paths that I have taken and my internal debates around the humor and gravity of life. It is an exploration of my own humanity and my attempt to create new stories and mythologies as one’s mortality draws closer. The images express both humor and pathos…the humor or “comedy” is one way to respond to the burdens and confining aspects of contemporary society that can often provoke profound insecurity and fear.

I began the series as a means of exploring my own paths in photography and in life. Some of the images express a sense of confinement imposed upon me by society as a gay man. Others reflect the fantasies and humorous scenarios that emerge when I free myself from the often self-imposed boundaries that inhibit me. 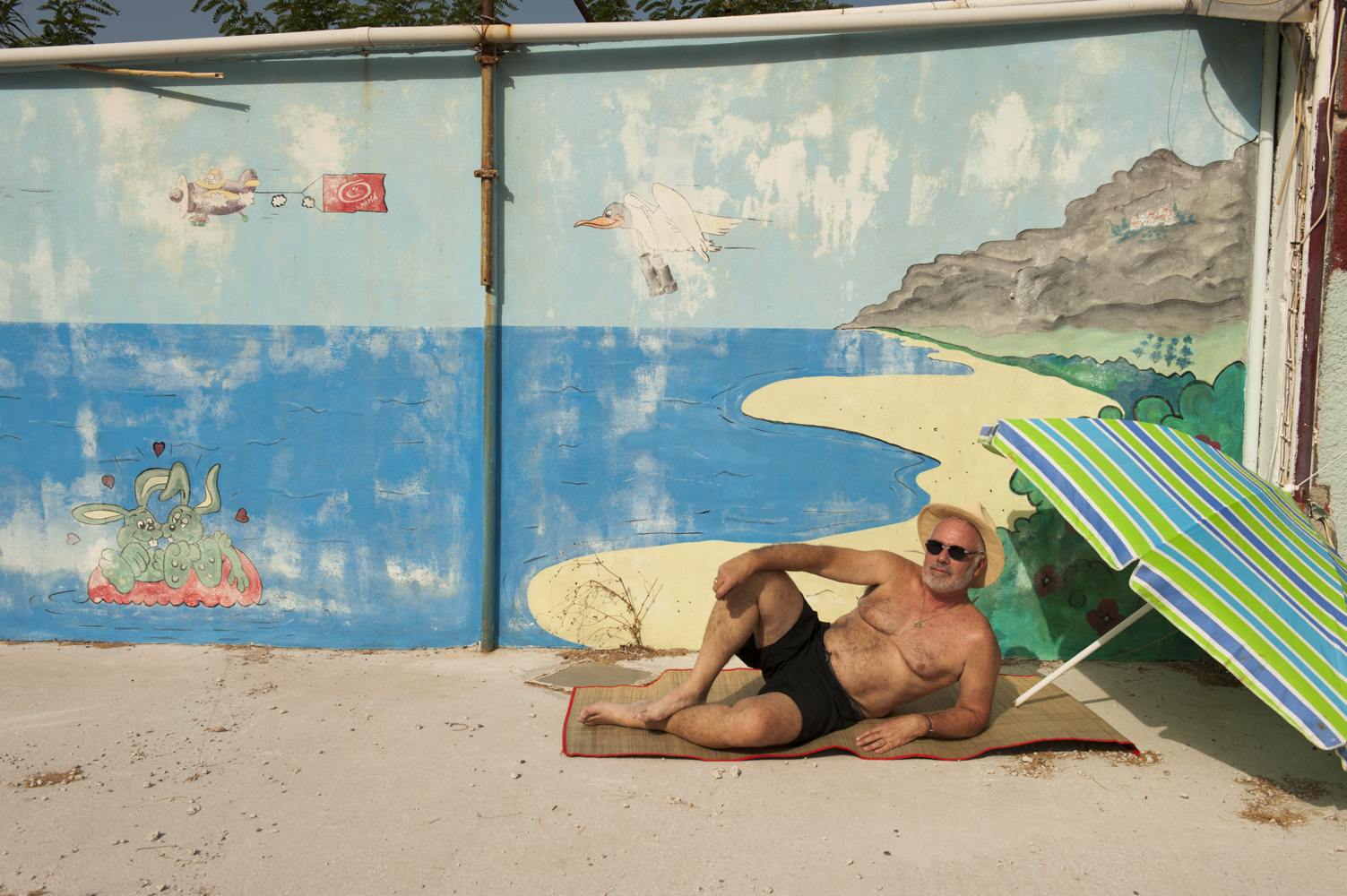 ©Michael Honegger, The Beach Bunnies, from My Human Comedy

It was so wonderful spending a week with you in Maine this summer. As an American with a long legacy in France, do you approach photography in a different way with your European perspective?

I am not certain that my approach to photography has changed dramatically while living in France for the past 15 years but there are certainly influences here that have had a definite impact upon my photographic vision. I have a much greater exposure to other photographers and photographic trends by living in a culture that places a premium upon the arts, especially, photography. Paris in November is a “moveable photographic feast” and a celebration of the image. Paris Photo, the memorable photographic art fair, leads the way by prompting the gathering of hundreds of international galleries, publishers, collectors and aficionados. Galleries and museums all over Paris highlight photography projects in conjunction with the fair that allows one to bathe in inspiration. I have had the good fortune to develop long-term associations with other French and European photographers as well as international galleries as a result of this cornucopia of talent. 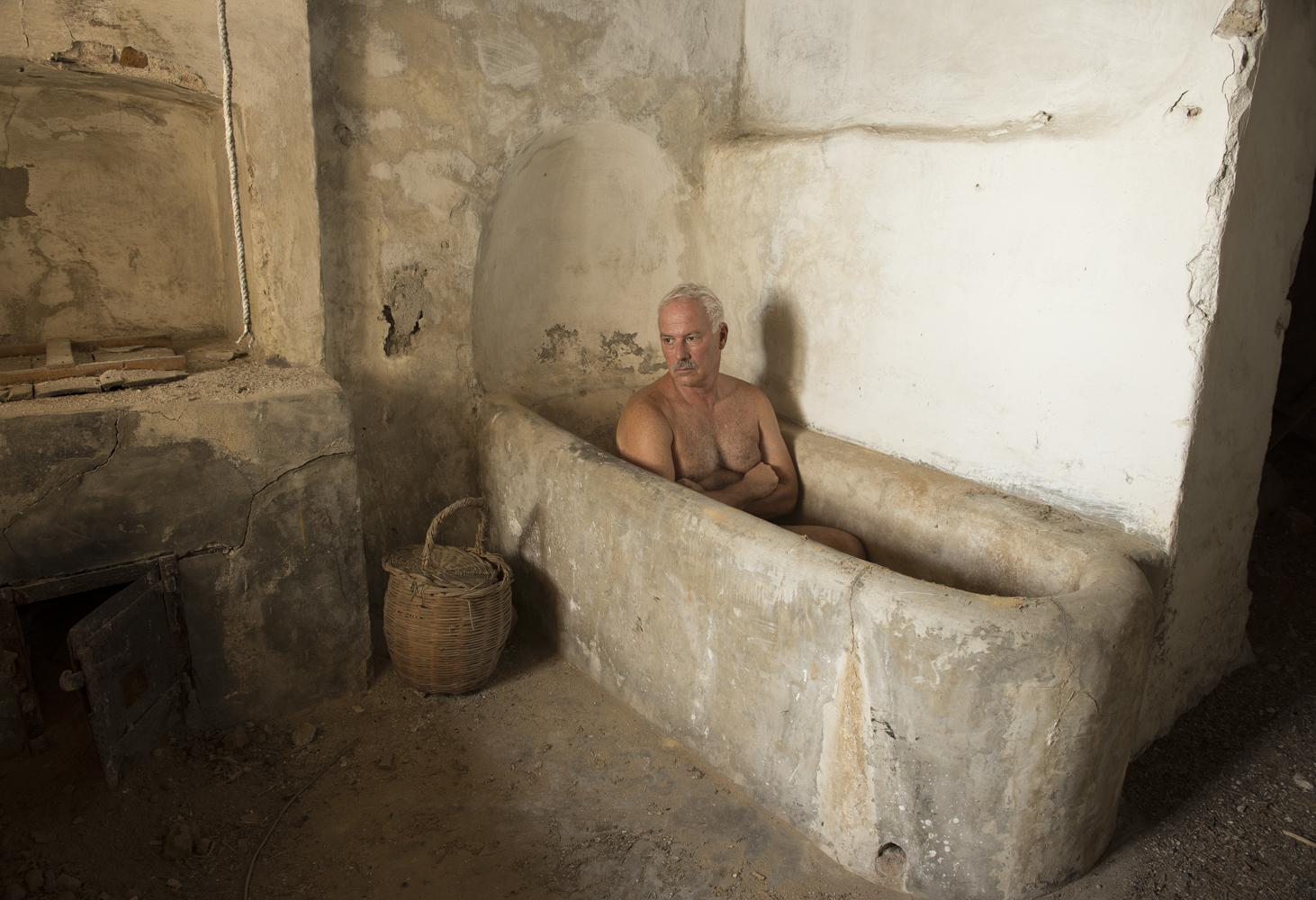 ©Michael Honegger, The Trough, from My Human Comedy

Ironically, Paris Photo, provided my initial introduction to one of the photographers that I chose to highlight this week, Vee Speers. I attended Paris Photo in 2008 and was fleetingly introduced to Vee as she signed books for her “Birthday Party” series at Jackson Fine Art’s booth. A mutual friend and fellow collector knew Vee and we were both invited to a dinner party at her apartment/atelier in Paris. I began collecting her images from then on and we have become good friends in the process. Collecting was the route for my introduction to Olivier Valsecchi who had a solo show at the Opiom Gallery in Provence and whose work I had admired after his having won the Hasselblad Masters award in Fine Art some years ago. I met Alastair Magnaldo socially and was intrigued by his whimsical surrealistic approach to image making combined with a darker element that triggered my curiosity. Emilie Mori is my most recent discovery through a referral by Vee Speers who admired her talent during a workshop in Arles earlier this year. I was quite taken with Emilie’s eye for color and architectural abstraction and I wanted to introduce a young emerging talent into the mix for this week. 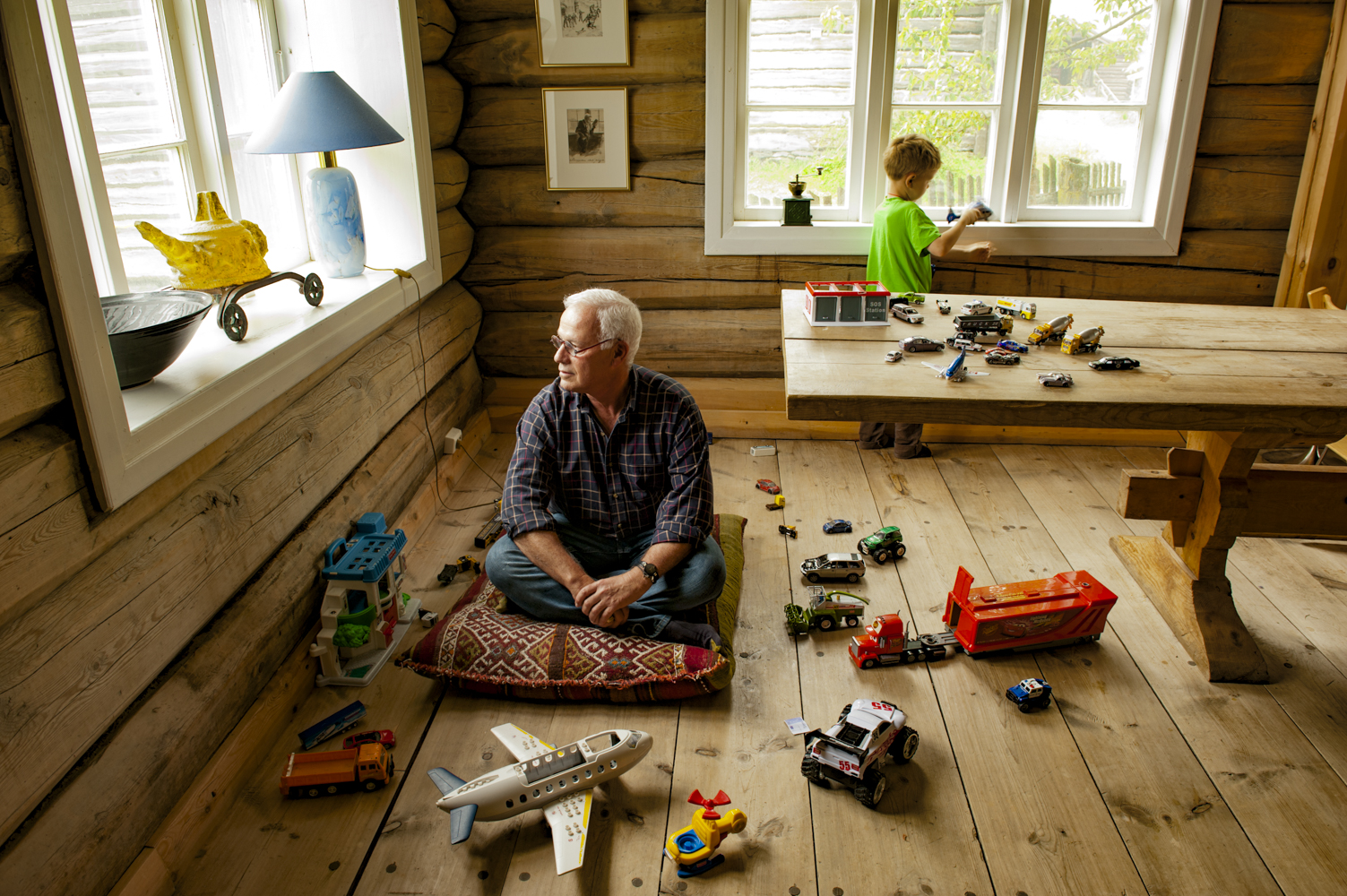 ©Michael Honegger, The Children’s Hour, from My Human Comedy

How did your project, My Human Comedy, come about?

I had the amazing good fortune to participate in a workshop in Norway sponsored by Nord Photography that was conducted by Arno Minkinnen, a master of self-portraiture. I had reached a temporary block with my photographic inspiration and Arno challenged me to come up with a series of self-portraits during the week we were together. Given the gorgeous environment in which the workshop took place, I became excited by all the possibilities that unfolded that week as well as the encouragement that Arno provided. I made a commitment from then on to continue to pursue the self-portraits whenever and wherever I found myself and that has continued to this day. I now understand how therapeutic and creative the process can be in allowing oneself to delve into the multi-faceted aspects of one’s psyche. 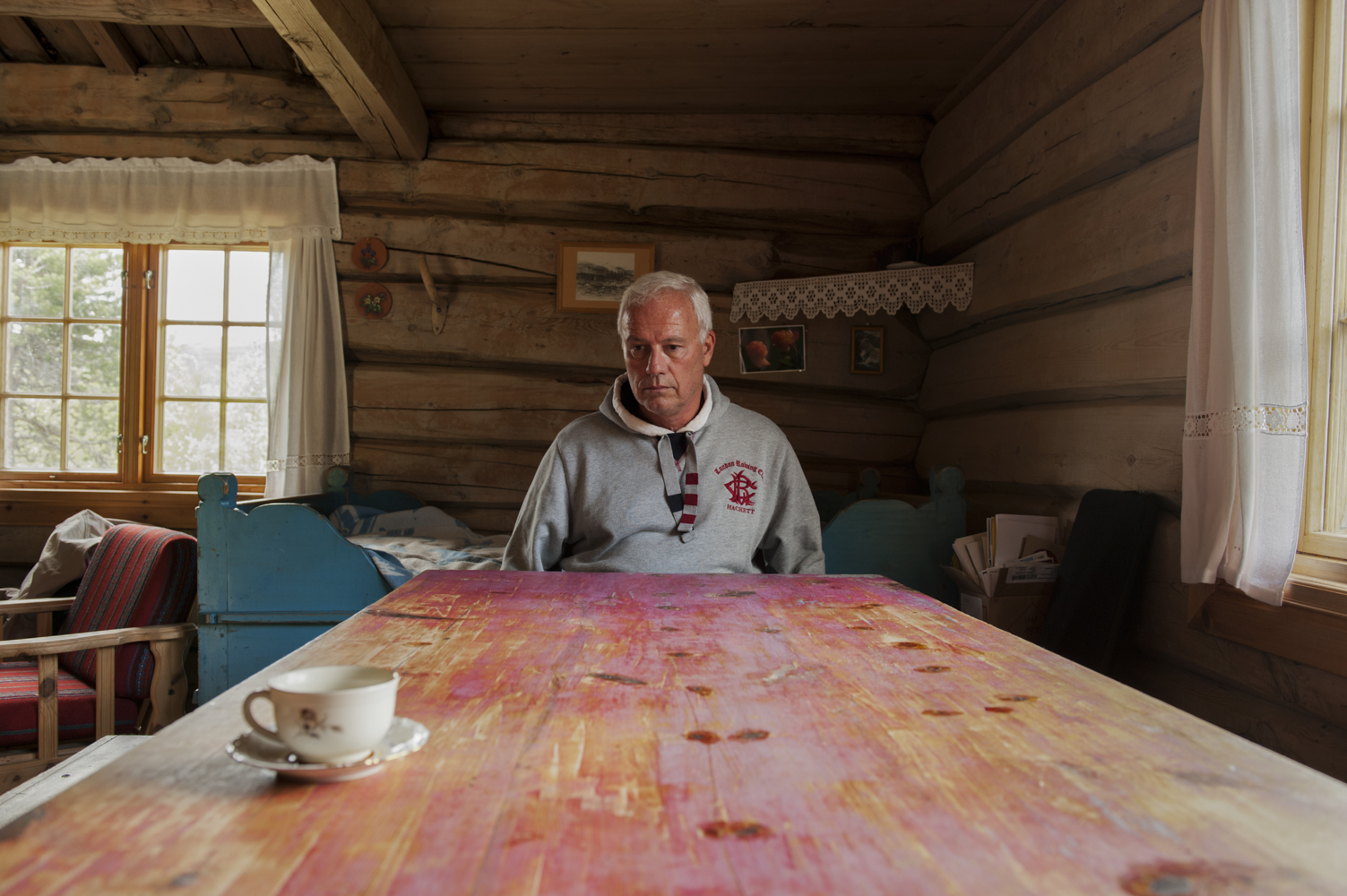 ©Michael Honegger, The End of Tea, from My Human Comedy

These are self-portraits but do you see them as reflections of yourself or of you as an everyman?

I believe there is a strong element of both in the images. When I begin to envisage a particular scenario, there is normally a trigger of light, place, circumstance or a combination thereof. I travel extensively to a variety of exotic destinations that often provide me with unusual settings in which to depict everyman themes. Some of my favorite self-portraits stem from some very deeply rooted issues about myself as an older gay man dealing with life’s foibles. I feel compelled to inject humor into the series as it is an important means for me to process deeper thoughts and emotions. 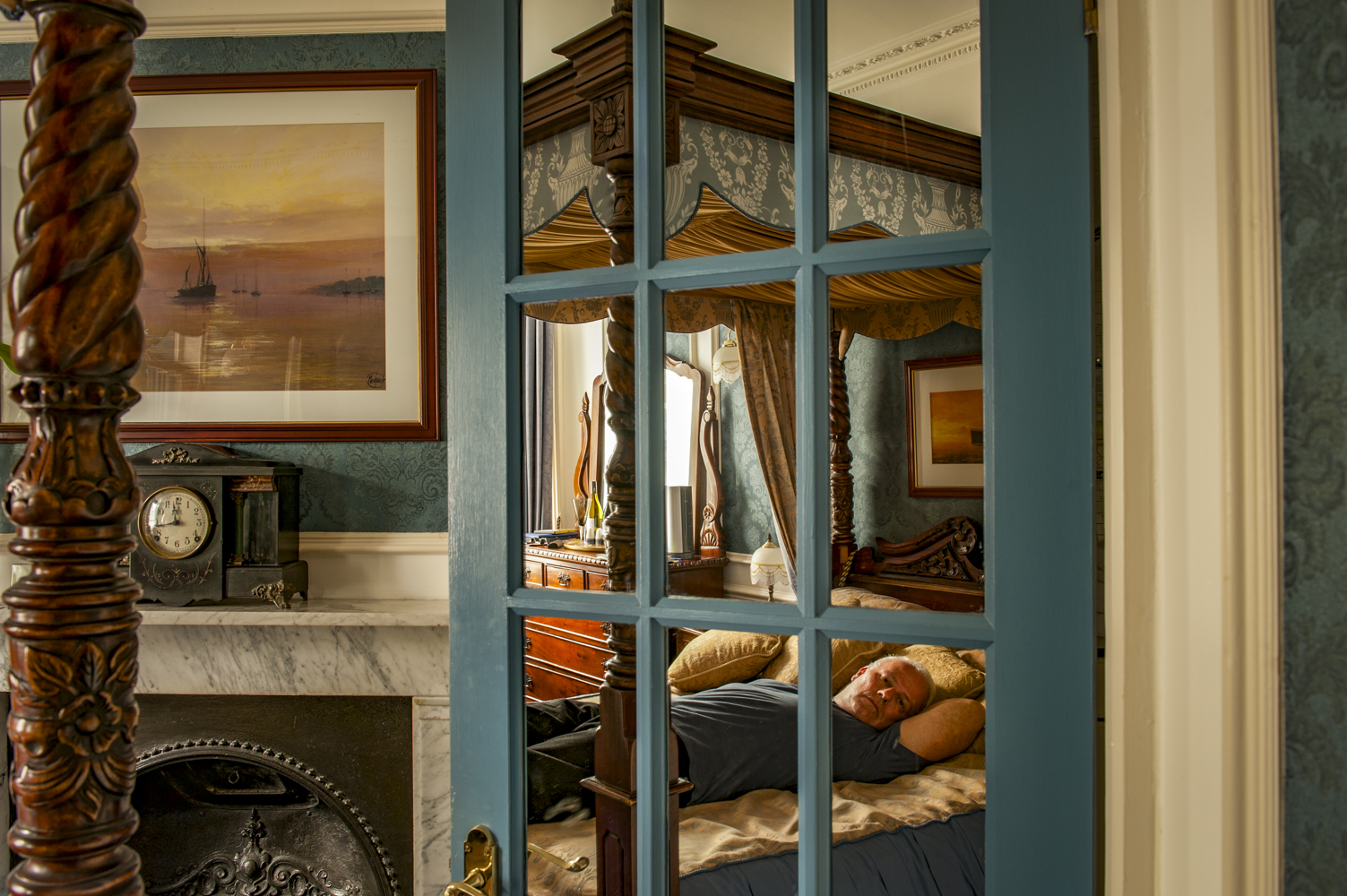 ©Michael Honegger, The Passage of Time, from My Human Comedy

In many of the images, there is an absence–a table set for dinner with no diners, empty rooms, participating in solitary activities. Ultimately we are all on our journeys in a singular way, no matter if we have loved ones and friends in our lives. Can you speak to this?

I have made a very conscious choice to emphasize a sense of absence and solitude in the series. A few of my earliest self-portraits had characters in the background but as the series evolved, I realized that it was truly about my journey in life and the key was to represent others by their absence. Some of the scenarios depict me looking away in a manner that alludes to an offstage presence but I really prefer to let the viewer’s imagination take flight. There is also a strong element in the work of the confinement that life sometimes imposes and the important role that humor plays in breaking out of those inhibitions. 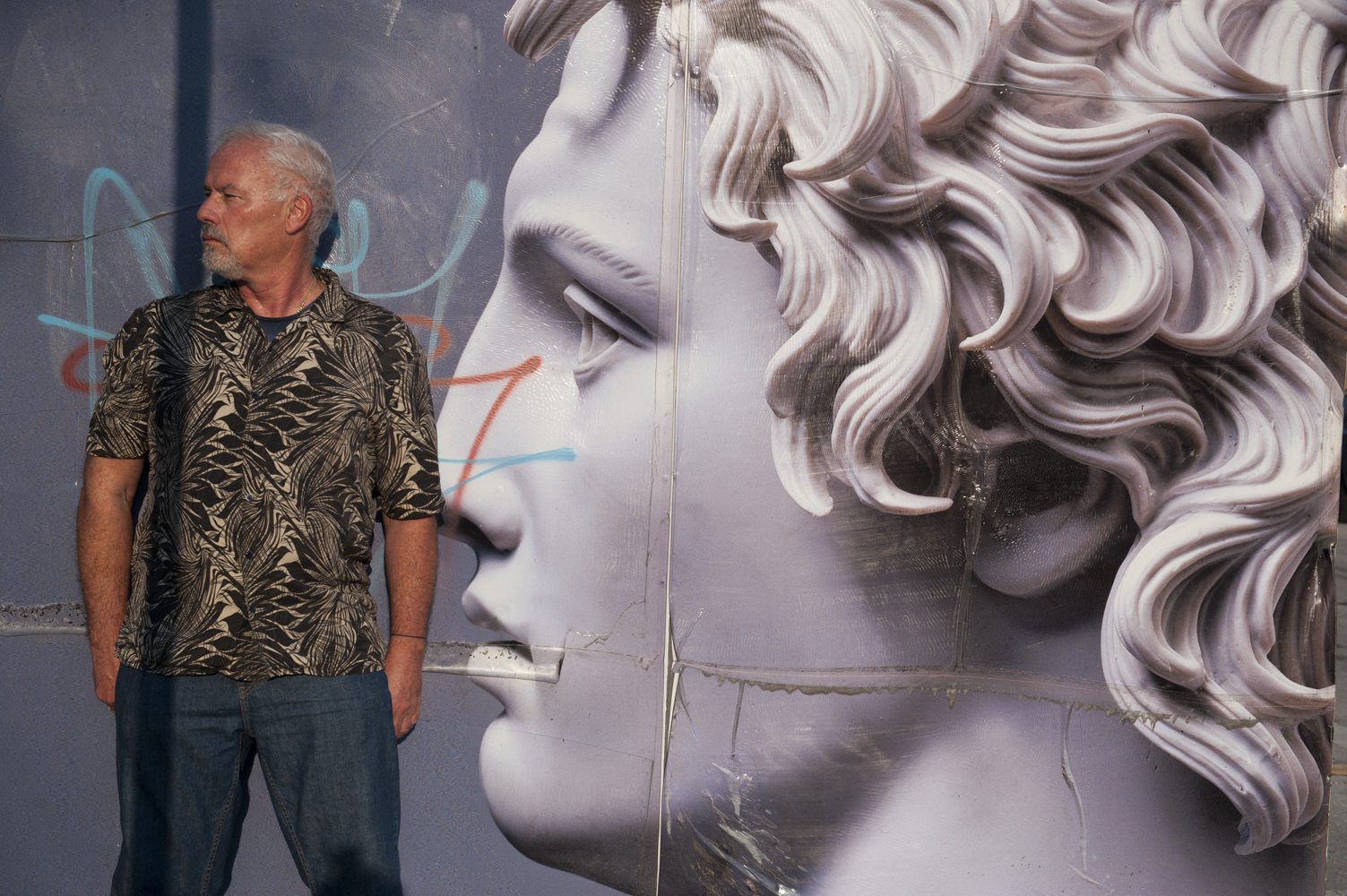 ©Michael Honegger, The Lost Youth, from My Human Comedy

I had just retired early from a successful and fulfilling career working for the Peace Corps and other international development organizations when I was confronted with the question of what to do next as I was still a young man in my early 50’s. My partner of many years realized that with a long retirement ahead I needed something inspiring to pursue in my life and he suggested that I attend a photo workshop at Maine Media Workshops in Rockport, Maine. I spent a week falling in love with the darkroom and realized that there was a year long Professional Certificate in Photography that was starting two weeks later. I consulted with my partner and applied to the program and was astounded that they accepted me. I spent a marvelous year learning the basics of photography that has inspired me ever since. And I continue to take workshops at Maine Media and other similar venues whenever I can as evidenced by our meeting there this past summer! 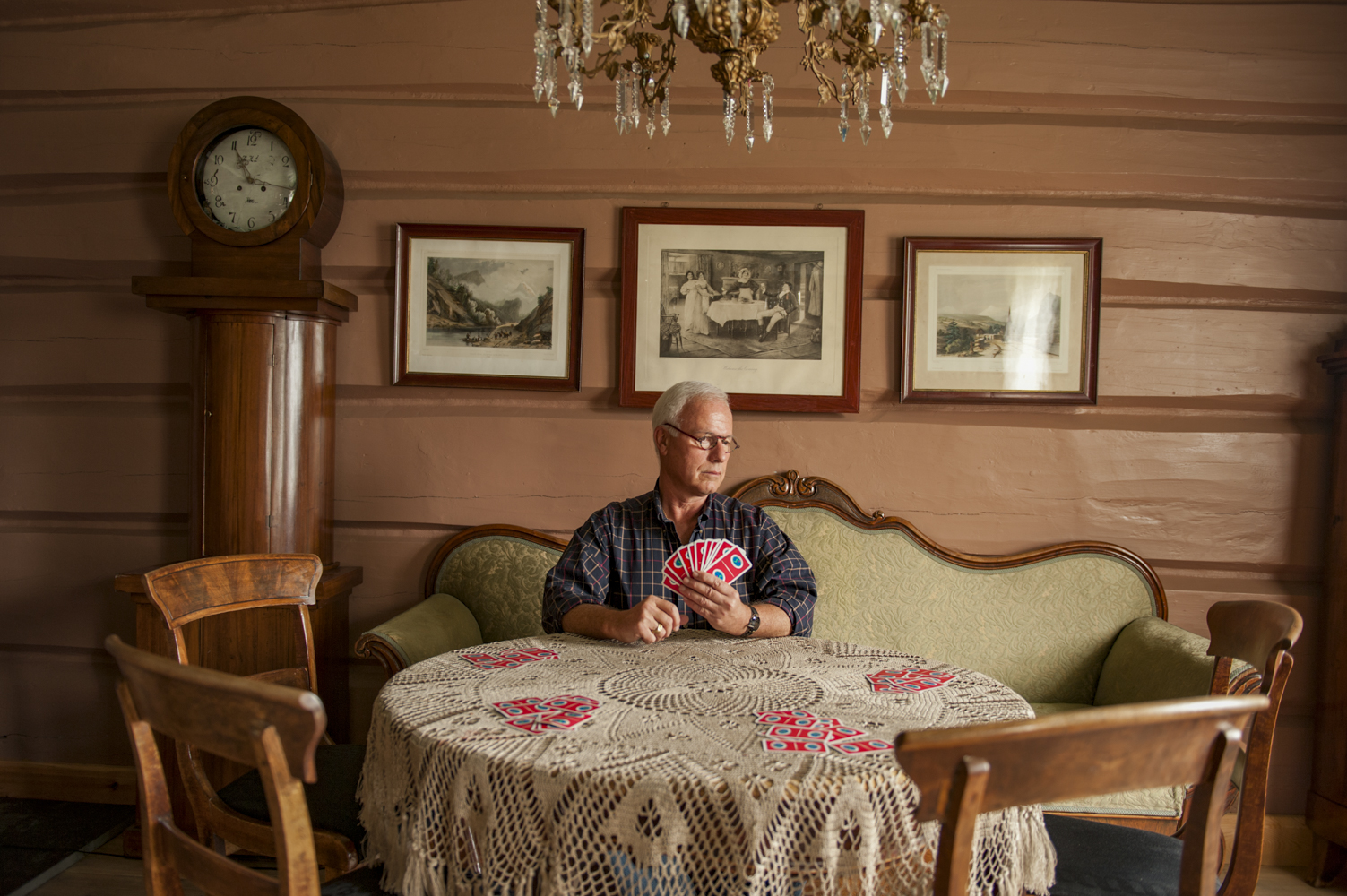 ©Michael Honegger, The Losing Hand, from My Human Comedy

Thanks to your inspiration this summer, I am beginning to research an exciting new project that deals with a period during my father’s career when he basically conducted espionage activities against the Communist regimes in East Germany and the Soviet Union. I have begun outlining a structure for the project that will allow me to re-visit family memories as well as historical truths that are still very much in the news today. I also plan to soldier on with my self-portrait series for the long haul…it never grows old even though I do! 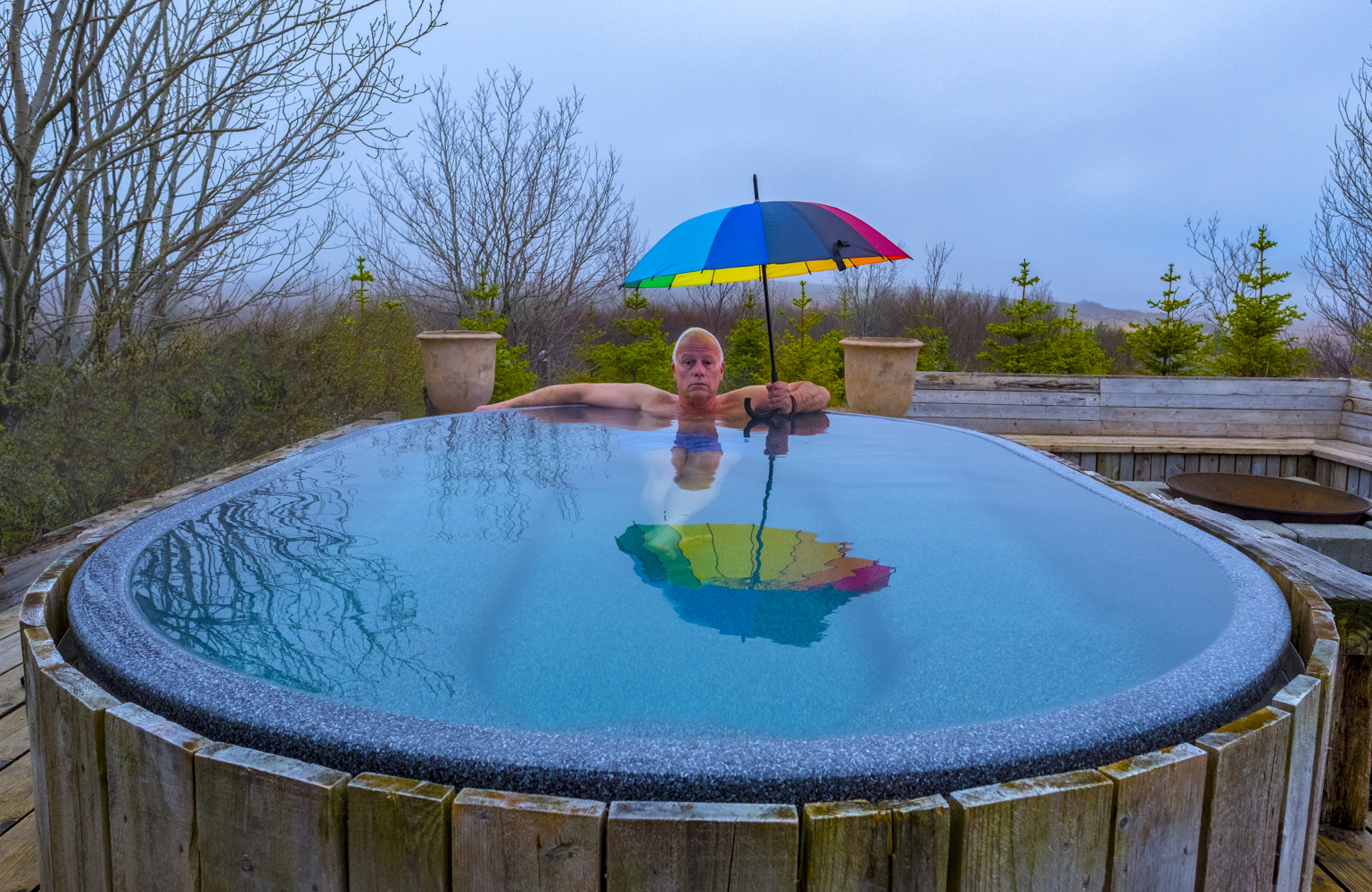 ©Michael Honegger, My Personal Pride, from My Human Comedy 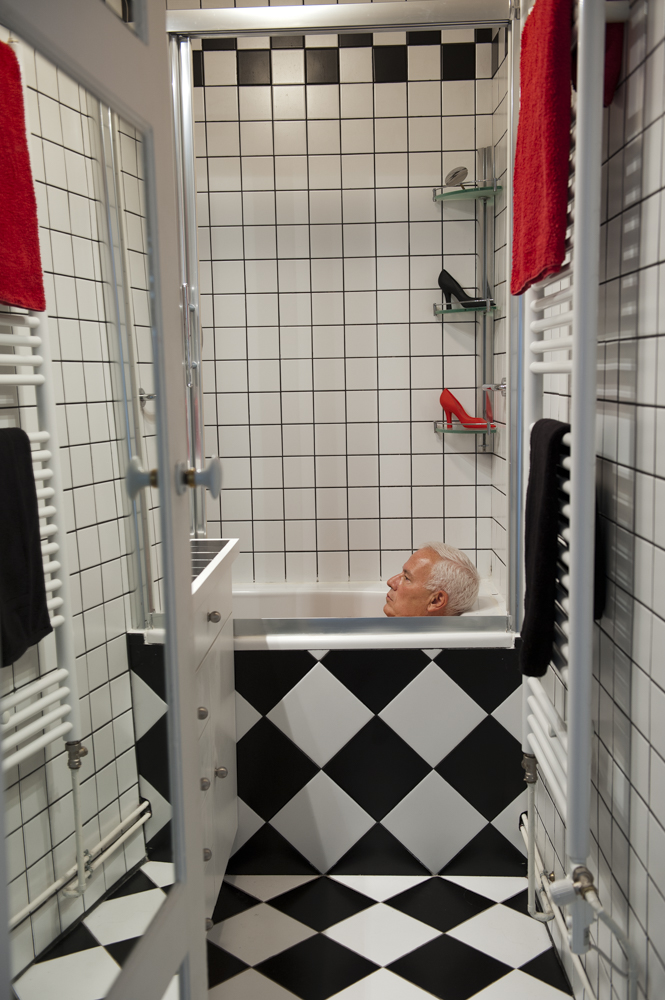 ©Michael Honegger, The Red Shoe, from My Human Comedy 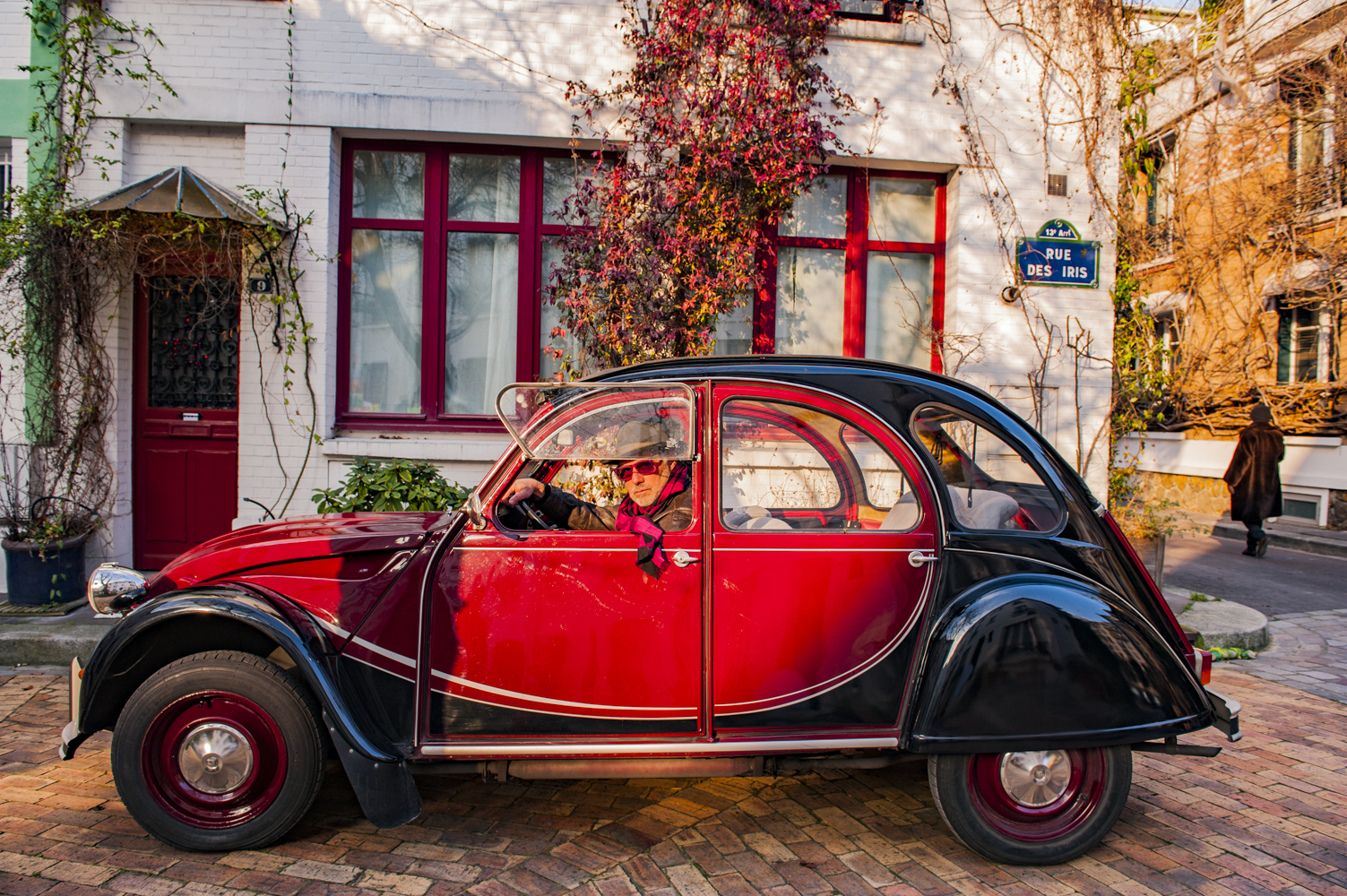 ©Michael Honegger, The Two Horses, from My Human Comedy 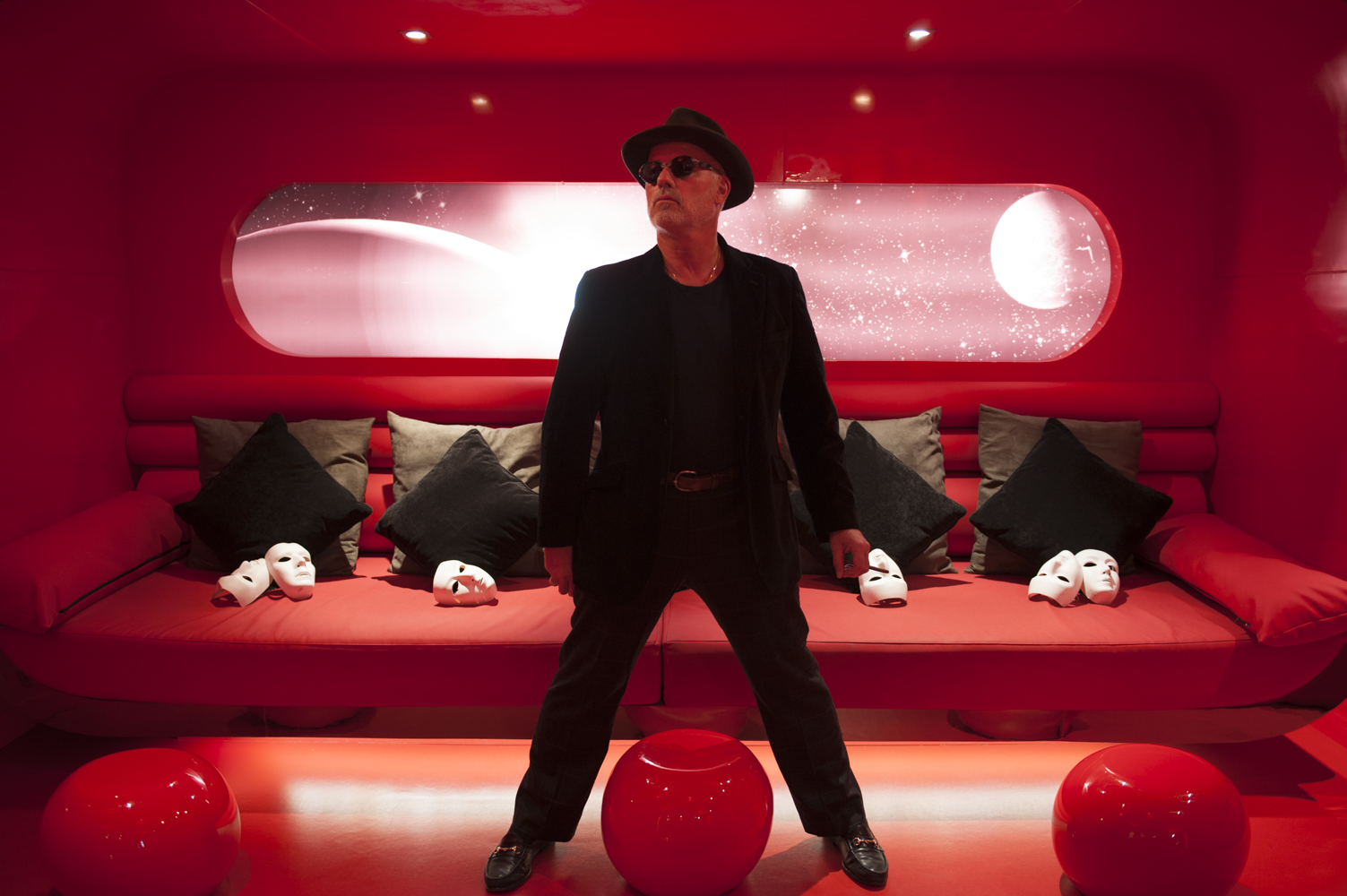 ©Michael Honegger, The Love Capsule, from My Human Comedy 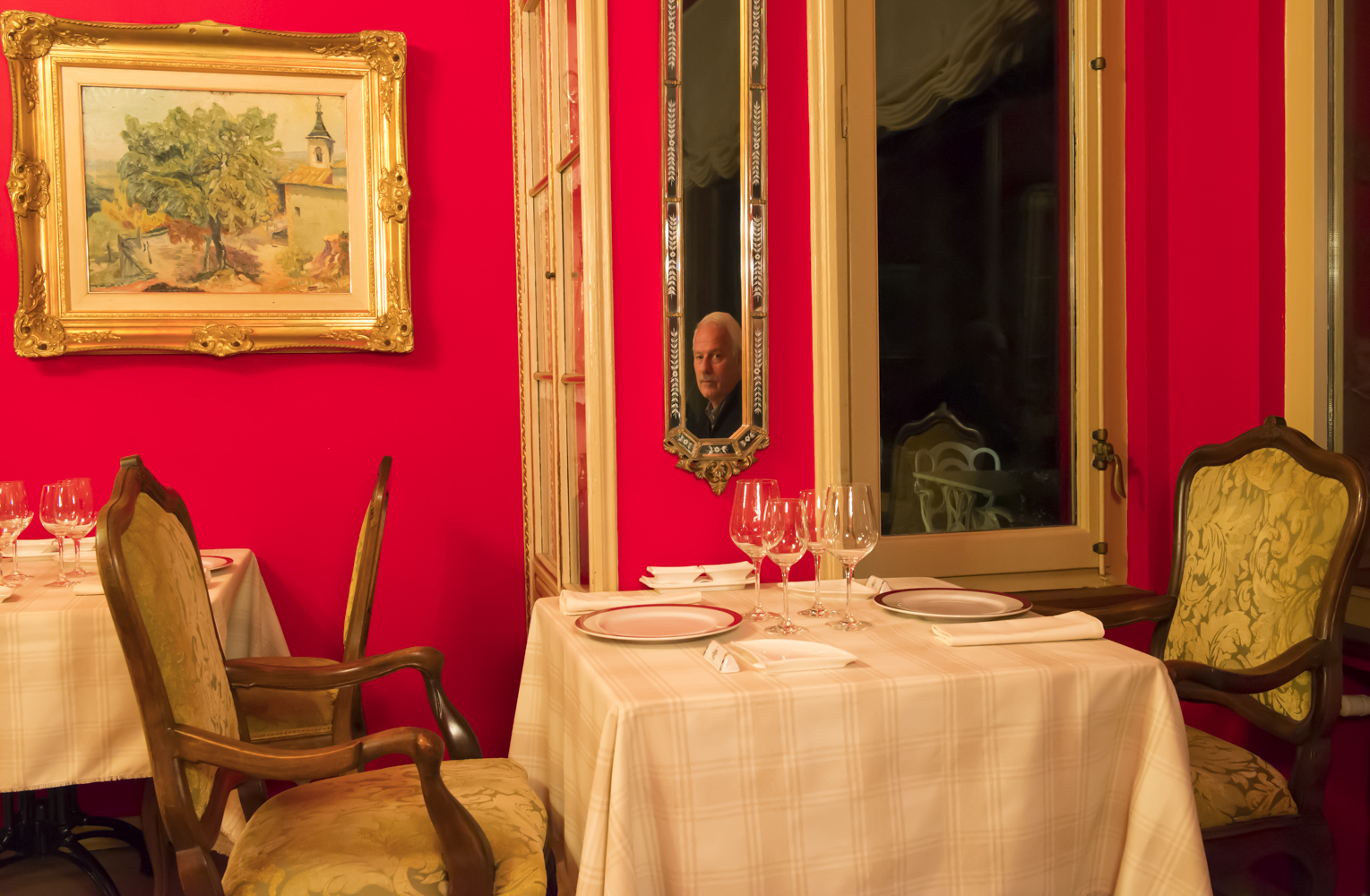 ©Michael Honegger, The Last Supper, from My Human Comedy 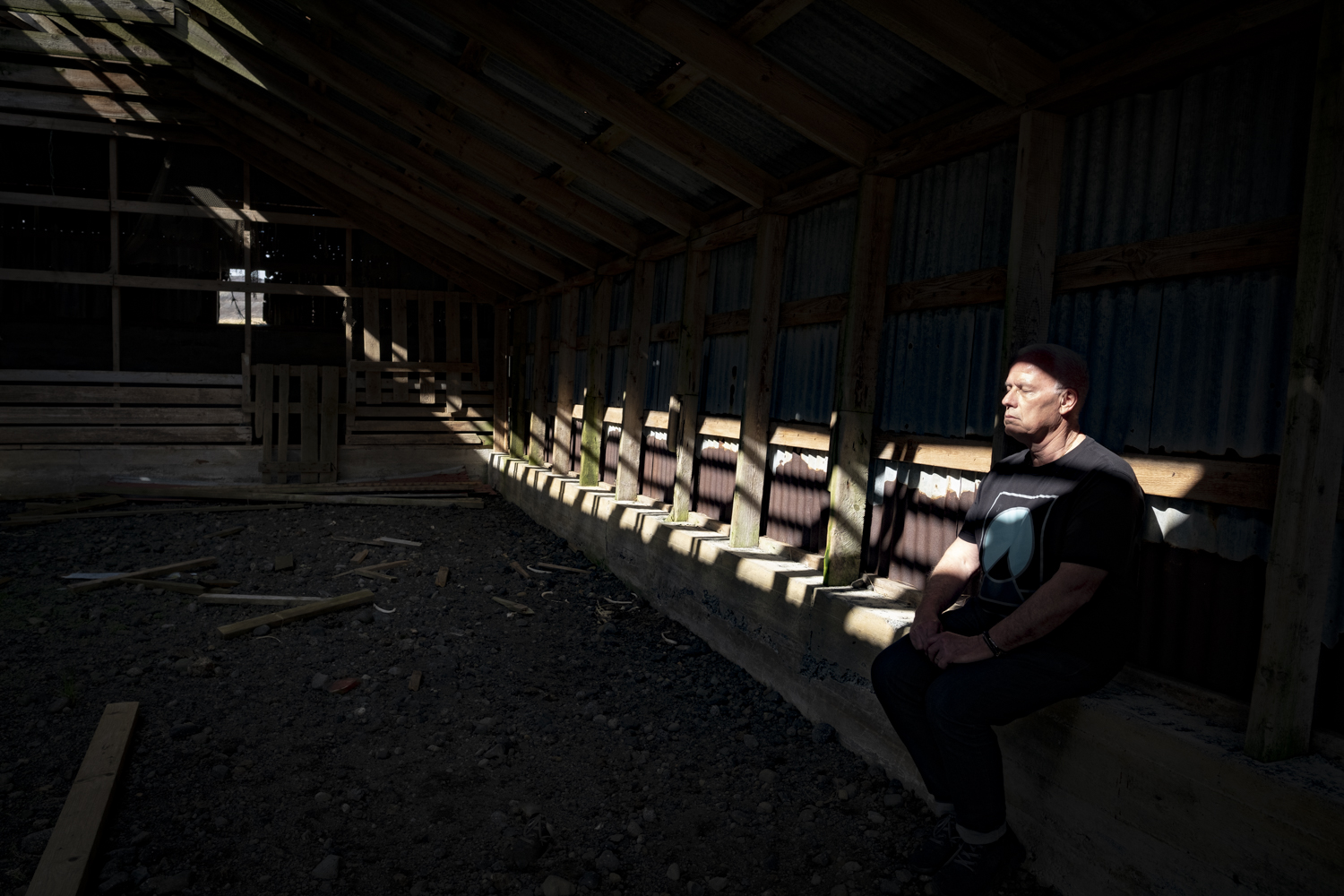 ©Michael Honegger, Follow the Light, from My Human Comedy