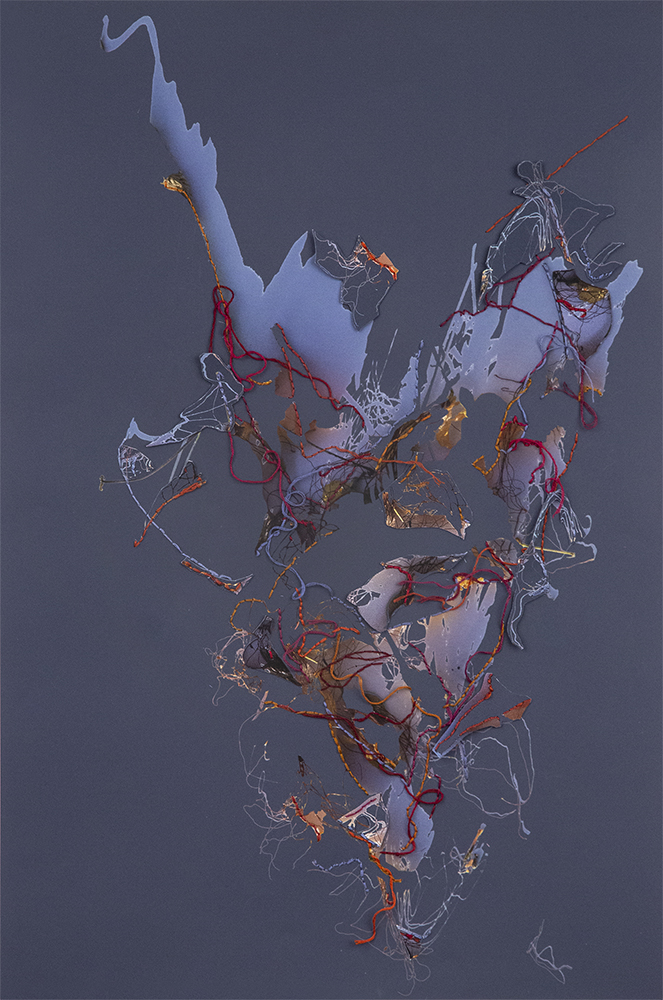 This week highlights artists who are having conversations with nature, but artist Sandra Klein is learning the language of what’s left behind in the natural world–the shadows and shapes created by flora in decline for her series, Meeting the Shadow. After photographing flowers in her garden, she deftly removes everything but the shadows, then explores these mystical shapes with thread and small interventions of paper. The result is a re-seeing of the intangible that in some ways perfectly mirrors our experience during the pandemic where we have traversed the unknown, forcing us to re-imagine what we thought we knew.

Sandra Klein is an artist whose images, whether captured with a camera or composited, portray a layered world which, though filled with anxiety and trauma, still is rich with joy. She was born in Elizabeth, New Jersey and received a BFA from Tyler School of Fine Art in Philadelphia, Pa and An MA in Printmaking from San Diego State University. Her images have been shown throughout the United States and Abroad and she has had one person shows at the Griffin Museum of Photography, both the Lishiu and Yixian Festivals in China and the A Smith Gallery in Texas. She was the recipient of the Lorser Feitelson Grant jointly with artist Betye Saar.

Her work has been featured on Lenscratch, The Boston Globe, A Photo Editor, What Will You Remember, Musee Magazine, Beta Magazine, Dek Unu Magazine and Diffusion Magazines, and is held in public and private collections. IG@sandra_klein_photography 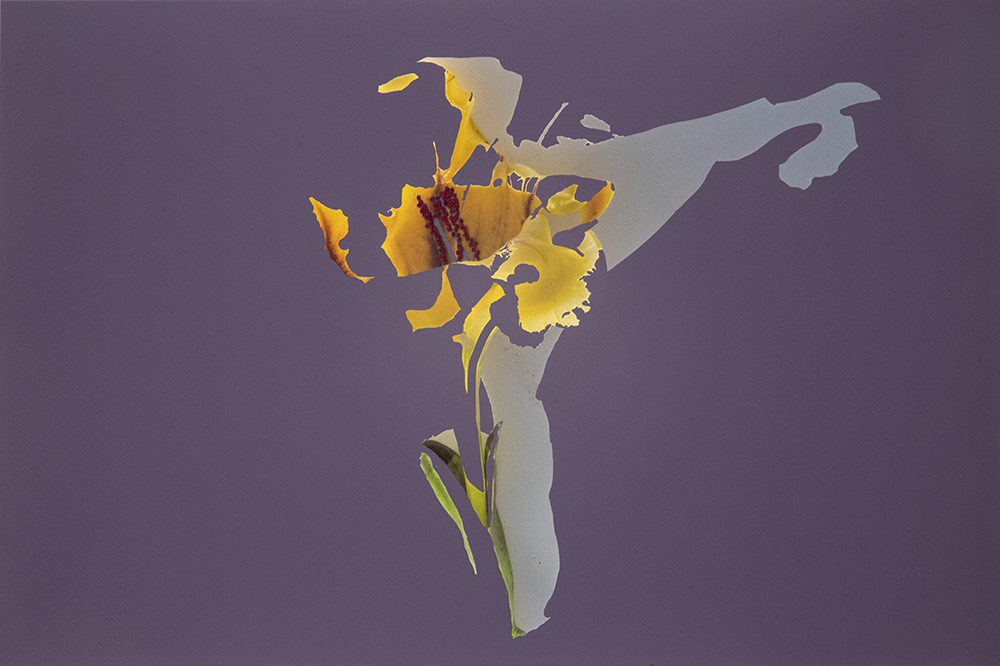 As I sit in my garden, I watch life become more and more fragmented – the pandemic, politics, issues of race and ethnicity, personal losses, all contribute to an unhinged surrealism. Here in my garden, I understand that the beauty and decay among the verdure serve as a metaphor for this new world.

In this series, I photograph flora in its decayed state, focusing on light and shadow. I then deconstruct the image, leaving only the shadow. I cling to what is ephemeral, meticulously removing the initial subject, having no idea what will remain. Chance takes over and I begin to have a conversation with silhouettes created by the sun. As I cut and sew the photographs as to create a material object, I’m stitching together what is lost, the fleeting memory of what once was. These fragile efforts portray my psyche during these turbulent times.

While working on this series, I was reminded of the year I spent working with the artist Betye Saar. To create her collages, she cuts shapes out of paper, only to throw them away. She then uses the scraps in her image making, forcing herself to work in the arena of the unexpected. I know that arena profoundly. There is so much in my life that I have been unprepared for and Meeting the Shadow is a metaphor for becoming comfortable with a future I can’t predict. 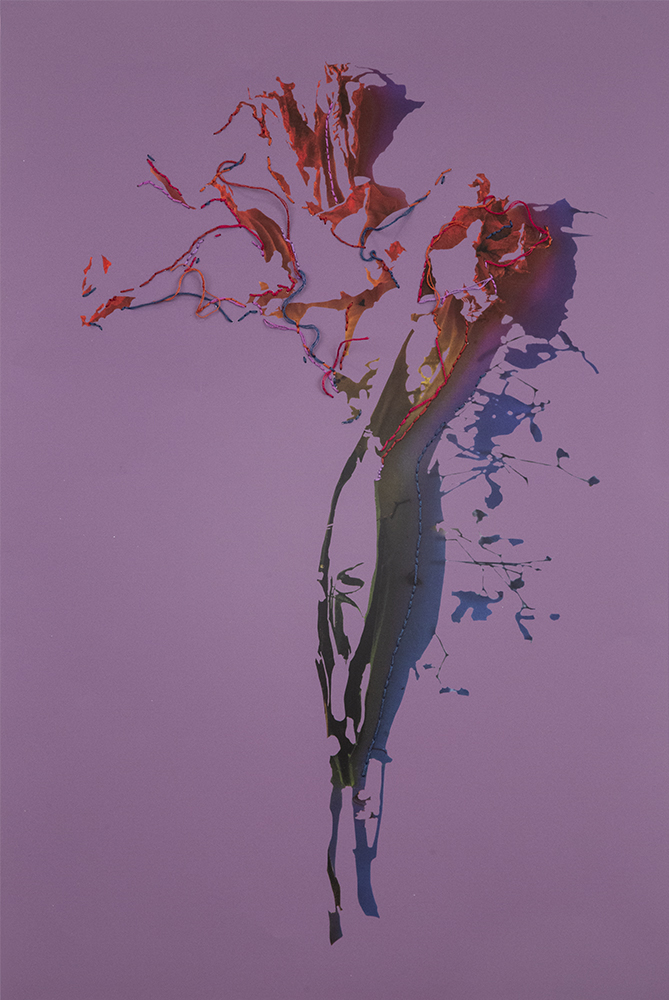 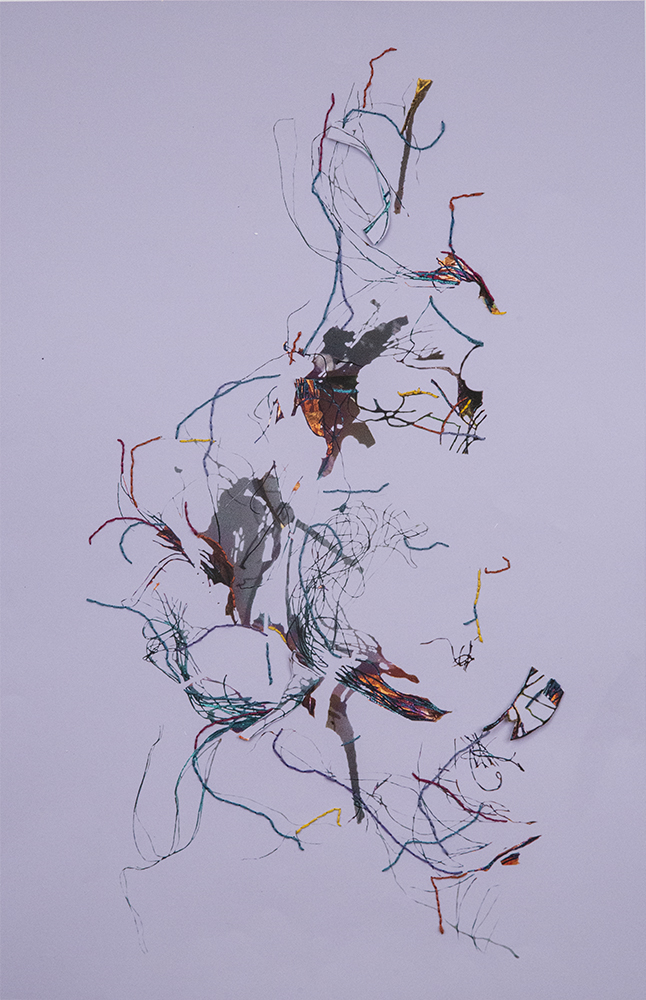 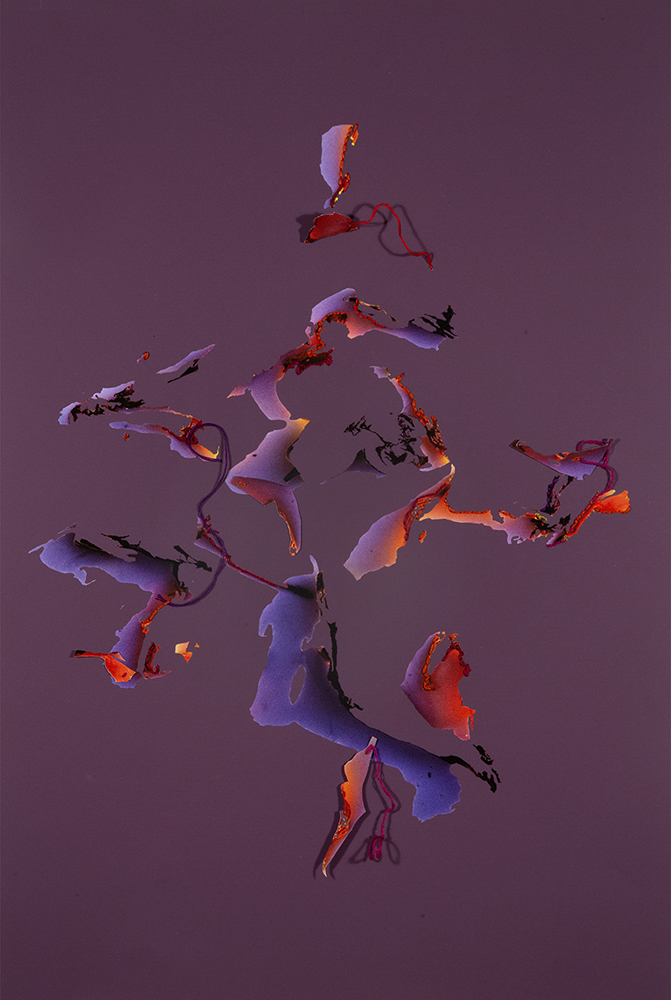 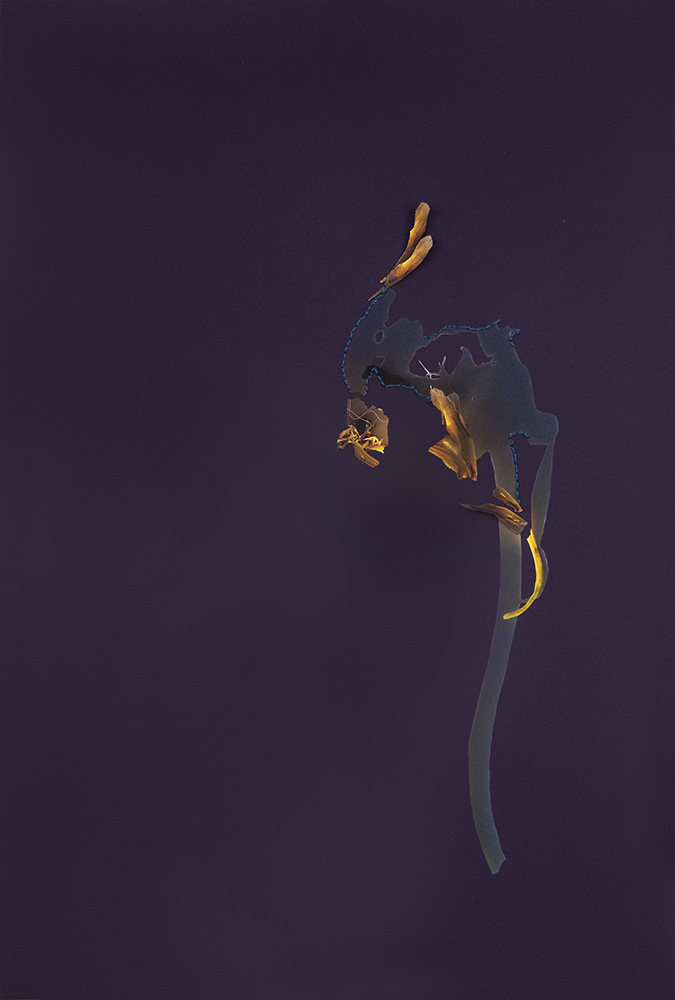 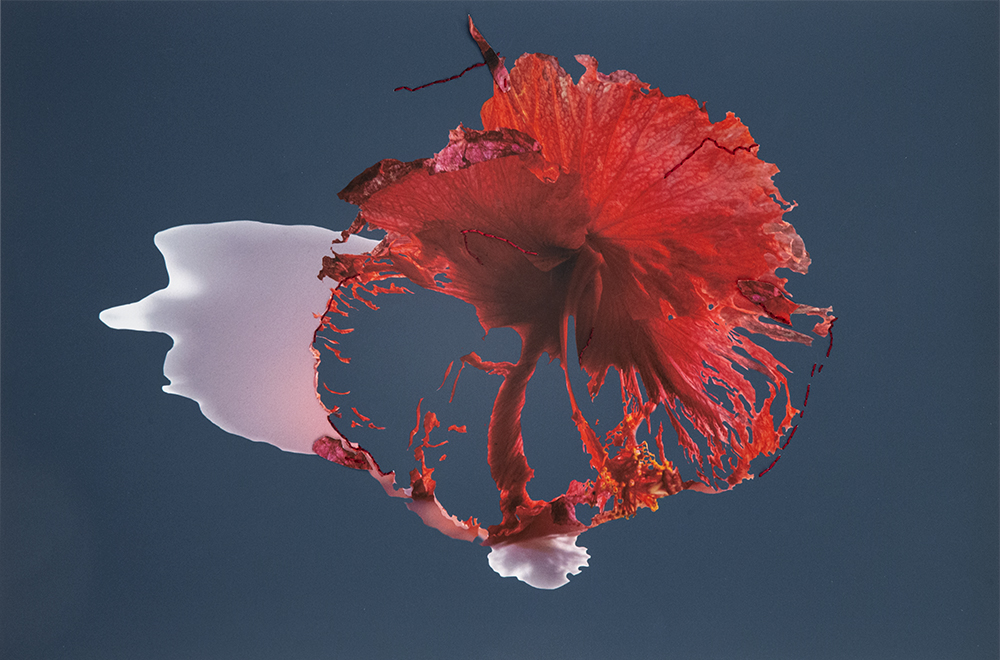 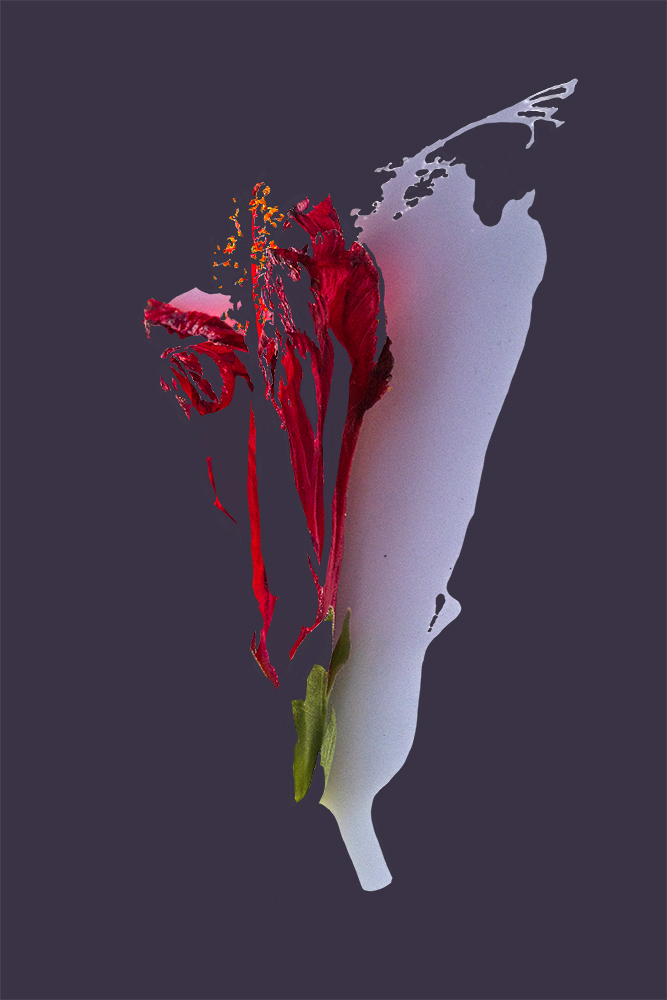 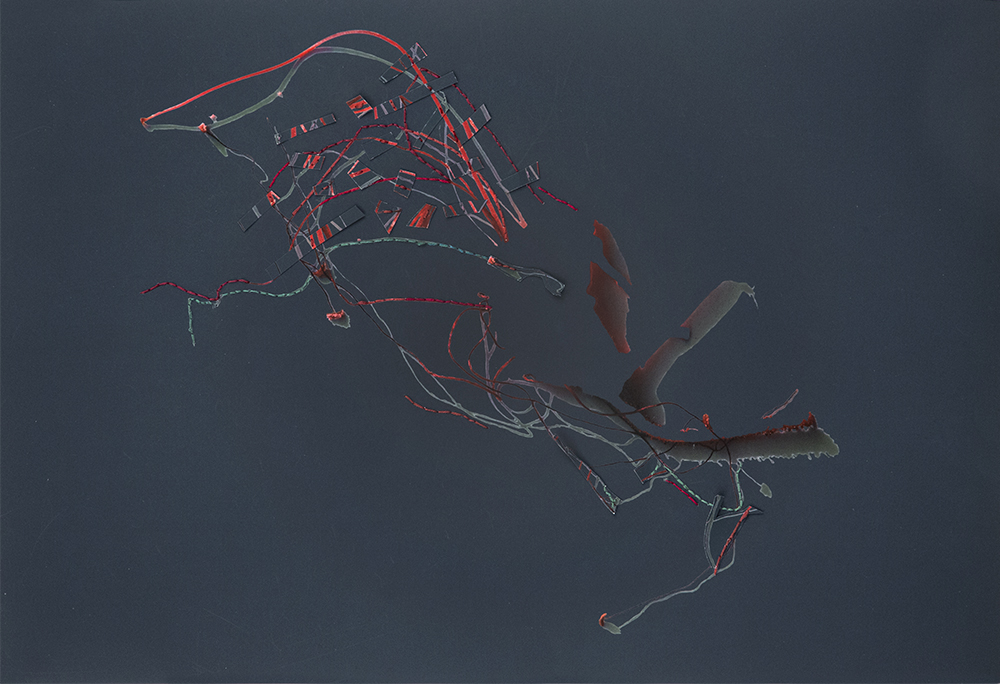 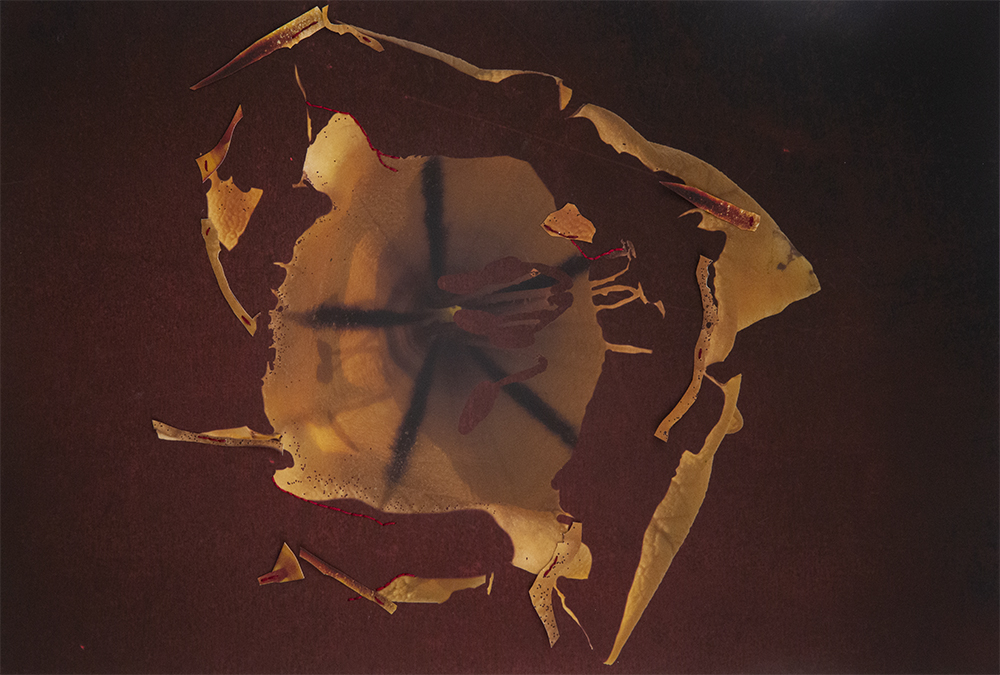