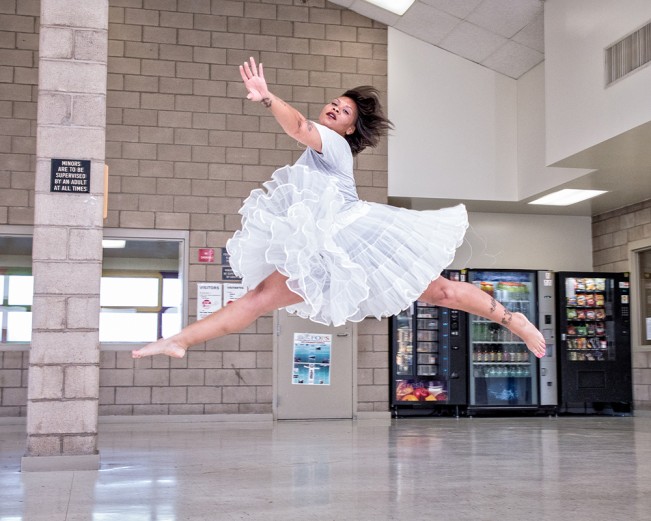 ©Peter Merts, A dance student practices in a visiting room at Central California, from Incarcerated Artists

Congratulations to Peter Merts for his First Place win in the CENTER Social Award for his project, Incarcerated Artists. The Choice Awards recognize outstanding photographers working in all processes and subject matter. Images can be singular or part of a series. Winners receive an opportunity to be part of the Winners Exhibition at El Museo Cultural de Santa Fe, complimentary participation in Review Santa Fe, and an Online exhibition at VisitCenter.org.

We invited a Selection Committee, comprised of Mary Anne Redding, Curator, Sioux City Art Center, and former CENTER grant recipients Ada Trillo and Justin Maxon to consider the following criteria: the quality of the images, writing, and concept fit within the social category, the work has potential for an interest outside of the art/photo community, and holds the potential for application and collaborations. The majority chose the series “Incarcerated Artists” by Peter Merts.

This series portrays a part of prison life that is not in the news. Positive prison communities are not the norm, so these photographs are necessary both within and well beyond the photo community. 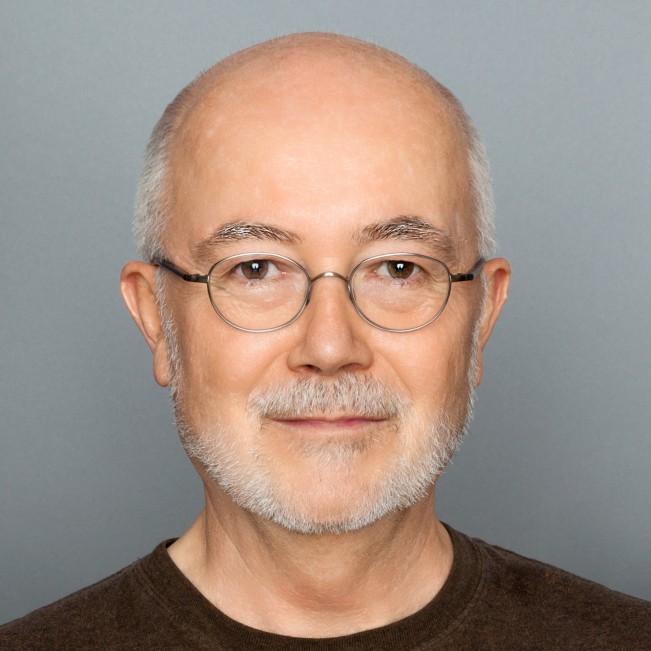 Peter Merts has been photographing for several decades, specializing in documentary, portrait, and fine art forms. Most recently, his work was exhibited at Photoville-LA and in the California State Capitol; he was in the Top 50 of Critical Mass 2020.His work has been published in the New York Times, the Washington Post, The Economist, Newsweek Online, the Los Angeles Review of Books, Conde Nast Traveler Magazine, and others. Some of Peter’s prison arts photography was funded by the California Arts Council, which administers the state’s Arts in Corrections program. In 2015, Peter and Dr. Larry Brewster published Paths of Discovery—Art Practice and Its Impact in California StatePrisons (second edition.) In Spring 2022, Daylight Books will publish a monograph of Peter’s prison art photographs. You can find him on Instagram at @petermerts. 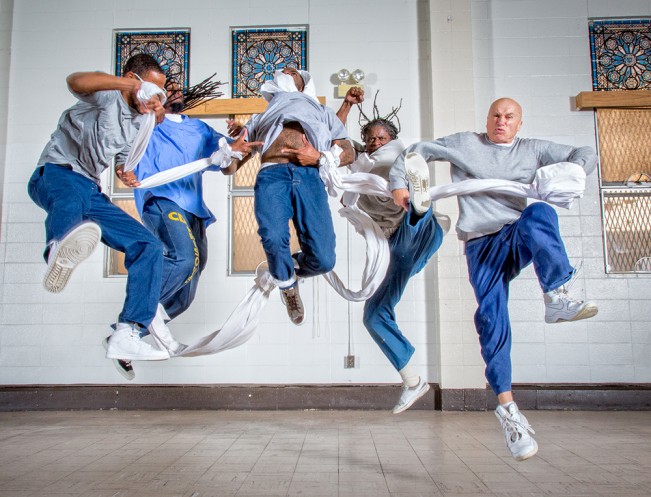 ©Peter Merts, Students rehearse for a dance/theater piece, in the Protestant chapel at San Quentin State Prison. 2015, from Incarcerated Artists

This project shows incarcerated men and women creating and performing artworks; beyond that, it portrays the passion, creativity, and humanity of those artists.

In spite of the advantages a White, middle class American upbringing, as an adult I was slow to gain traction in life—likely due to untreated childhood trauma. Fortunately, in my early 30’s I embraced therapy, settled into an amenable career, and began to discover the life-altering possibilities of art— specifically, of photography.

From the beginning, my photography projects were long (5 to 10 years), introspective, and immersive; topics included masculinity, childhood sanctuaries, and solitude. Parallel to this personal fine art work, I pursued documentary projects. One such effort involved photographing the work of a local non-profit (NGO) organization that served institutionalized populations, including jails and prisons. This eventually led to an invitation, by the man who then ran the art program at San Quentin, to photograph art classes at the prison.

I was intrigued of course by the incongruity of artistic expression in such a regulated, disruptive, and sometimes violent environment, and I recognized the rarity of the opportunity. I also felt an empathy for incarcerated men and women, many of whom like me had experienced childhood trauma. Beyond these factors, it just felt like a good fit—a project about art as a response to troubled lives.

From the beginning I was surprised by the seriousness with which incarcerated men and women approach their art. I witnessed artist collaborations, peer mentoring, and creative engagement with topics of identity, culture, family, and society. I became impressed with the artists’ commitment, risk-taking, artistic passion, and technical mastery. Their welcoming attitude gave me permission to move in closer, to work more collaboratively myself.

Studies have demonstrated the effectiveness of art practice in modifying the attitudes and behaviors of incarcerated men and women—the development of confidence, self control, and self-awareness; the reduction of disciplinary infractions; the improvement of relationships with other inmates, staff, and family. Yet public sentiment regarding prison arts programming remains tepid at best. This situation has led me to understand perhaps my greatest aspiration for this work: to illuminate the humanity of these incarcerated men and women, who are working so passionately to express themselves, to recover from their traumas, and to lead more fulfilling lives. 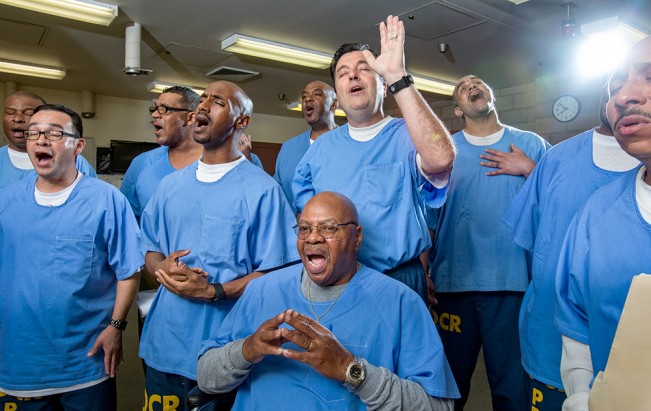 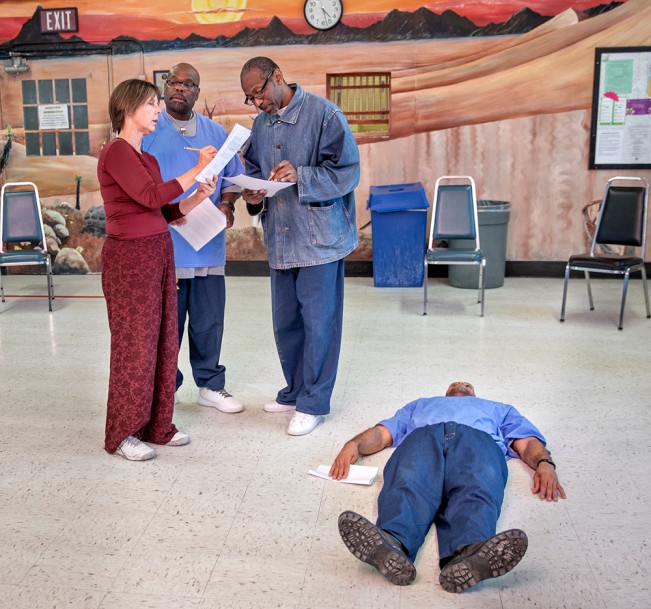 ©Peter Merts, Theater students and their instructor modify the script during rehearsal, in a visiting room at California Medical Center. 2018, from Incarcerated Artists 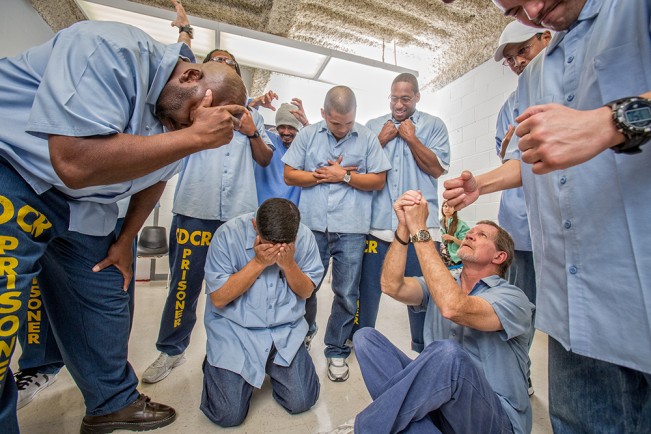 ©Peter Merts, Students of Shakespearean theater warm up with an exercise, at Solano State Prison. 2015, from Incarcerated Artists 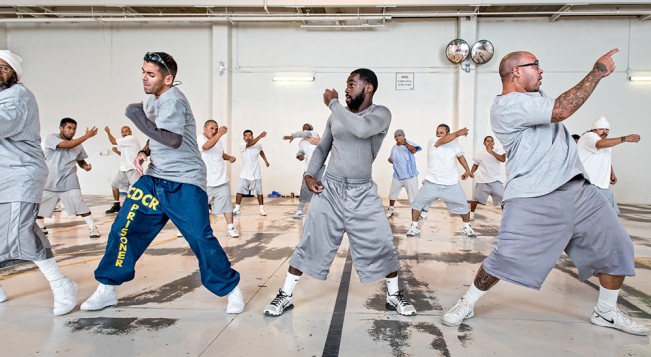 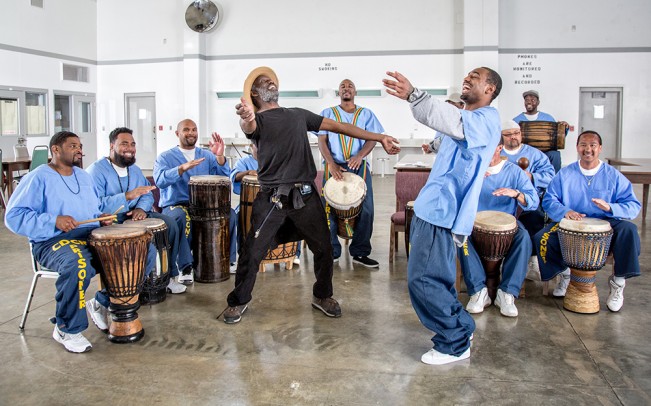 ©Peter Merts, The instructor and a student dance during drumming class, in a gym at Salinas Valley State Prison. 2015, from Incarcerated Artists 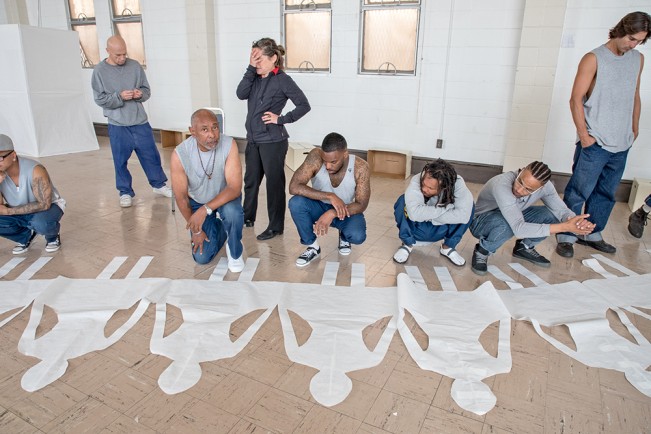 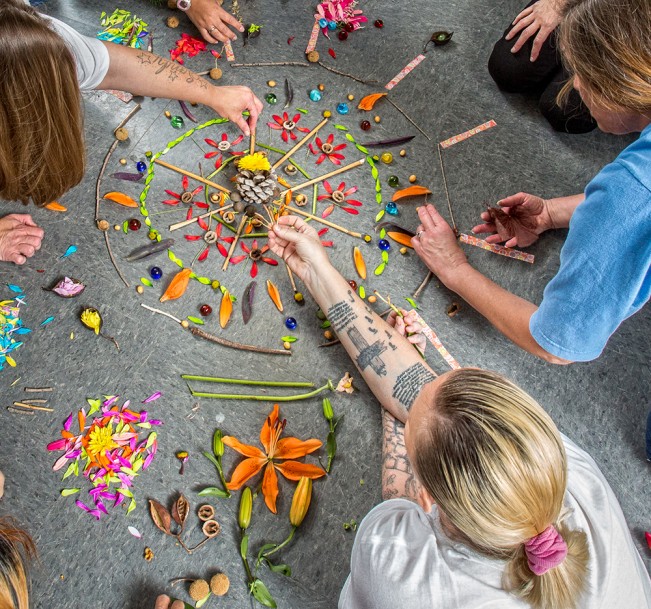 ©Peter Merts, Creating a mandala with flower petals, at California Institution for Women. 2016, from Incarcerated Artists 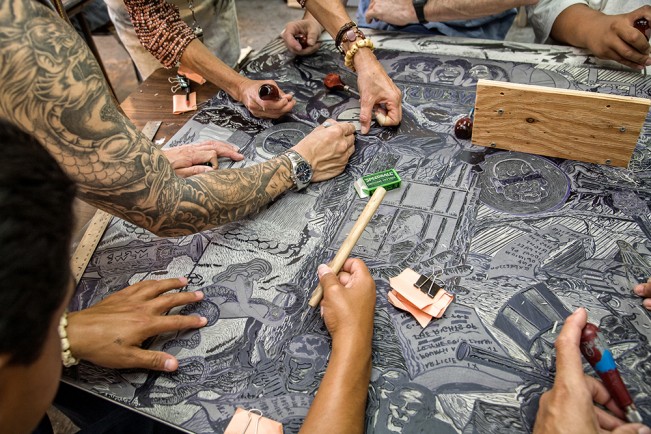 ©Peter Merts, Carving a linoleum block for printing, in the art studio at San Quentin State Prison. 2008, from Incarcerated Artists 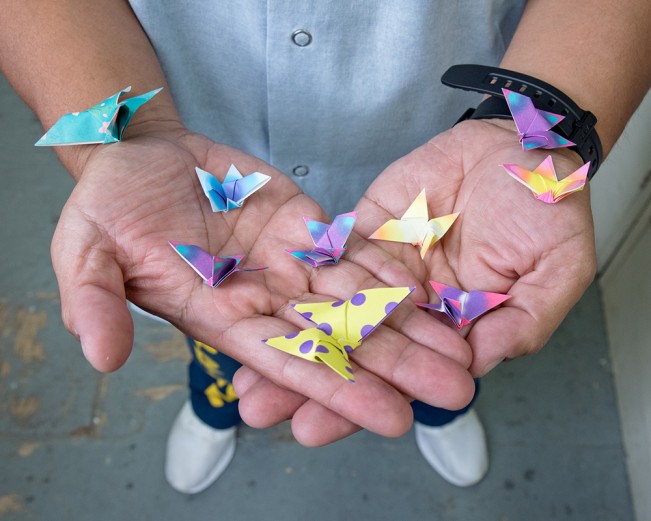 ©Peter Merts, An origami student holds his work, in the art studio at San Quentin State Prison. 2017, from Incarcerated Artists 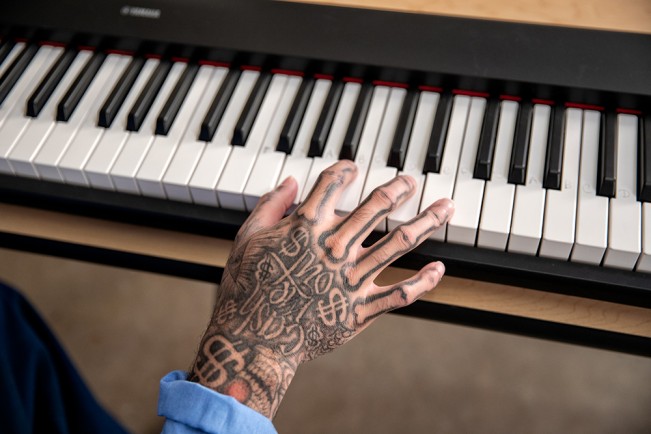 ©Peter Merts, A songwriting student tries a melody, in a bare warehouse space at CCI Tehachapi. 2018, from Incarcerated Artists 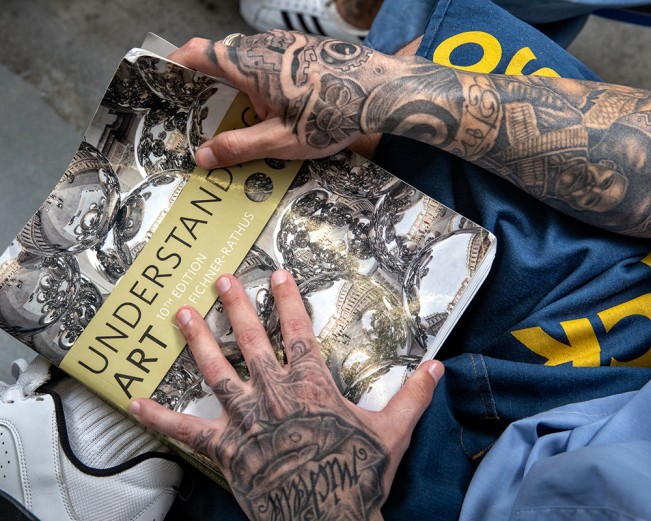 ©Peter Merts, An art student holds a textbook, in a classroom at Calipatria State Prison. 2018, from Incarcerated Artists 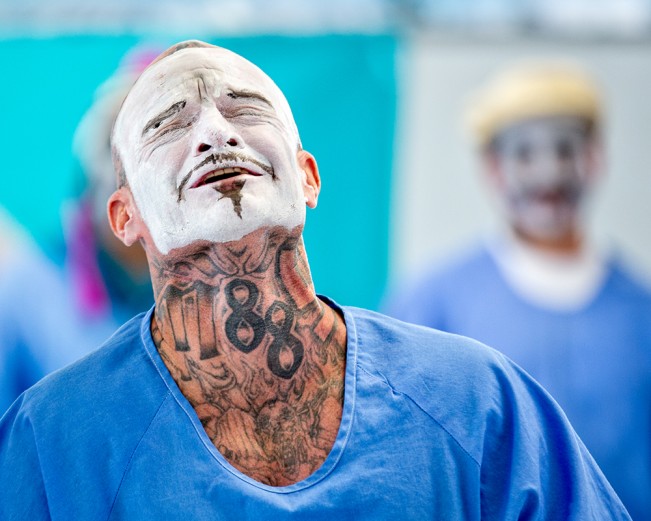