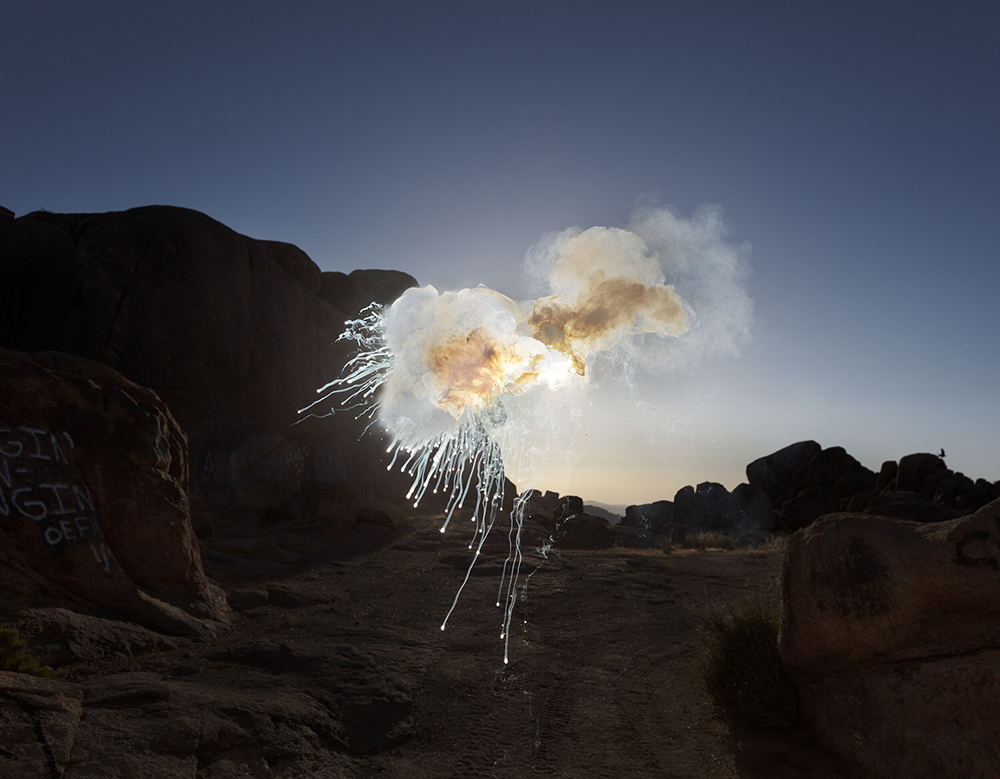 Kevin Cooley is a photographer and video artist whose work examines primal forces and how humanity interacts with them. His work can be raw, often volatile, but it maintains an air of mystery and romance. I first became acquainted with his work in 2018 when I began my current project Hostile Valley. I became fascinated by the curiosity, the power of nature and the simultaneous tenderness of the images. I chose to interview him for this feature as a way of gaining insights into his thought process through direct connection.

Kevin Cooley is a photographer, video, and installation artist. Since 2014, he’s held solo exhibitions at  Kopeikin Gallery, Catharine Clark Gallery, Disjecta Contemporary Art Center, The Museum of Photographic Arts, The Nevada Museum of Art, Pierogi, Portland International Airport, Ryan / Lee Gallery, The Savannah College of Art, and Design, and Yerba Buena Center for the Arts. His work is in prominent public collections including The Cleveland Clinic, The Guggenheim Museum, Los Angeles County Museum of Art, The Museum of Fine Arts Houston, 21c Museum, The Nelson-Atkins Museum, and The Museum of Photographic Arts. Cooley also receives commissions from prominent publications including the New Yorker, The New York Times Magazine, and Wired, among others. A sixteen-page portfolio of his recent wildfire imagery appears in the June 2021 issue of Harper’s Magazine. Follow Kevin on Instagram: @kevincooley_ 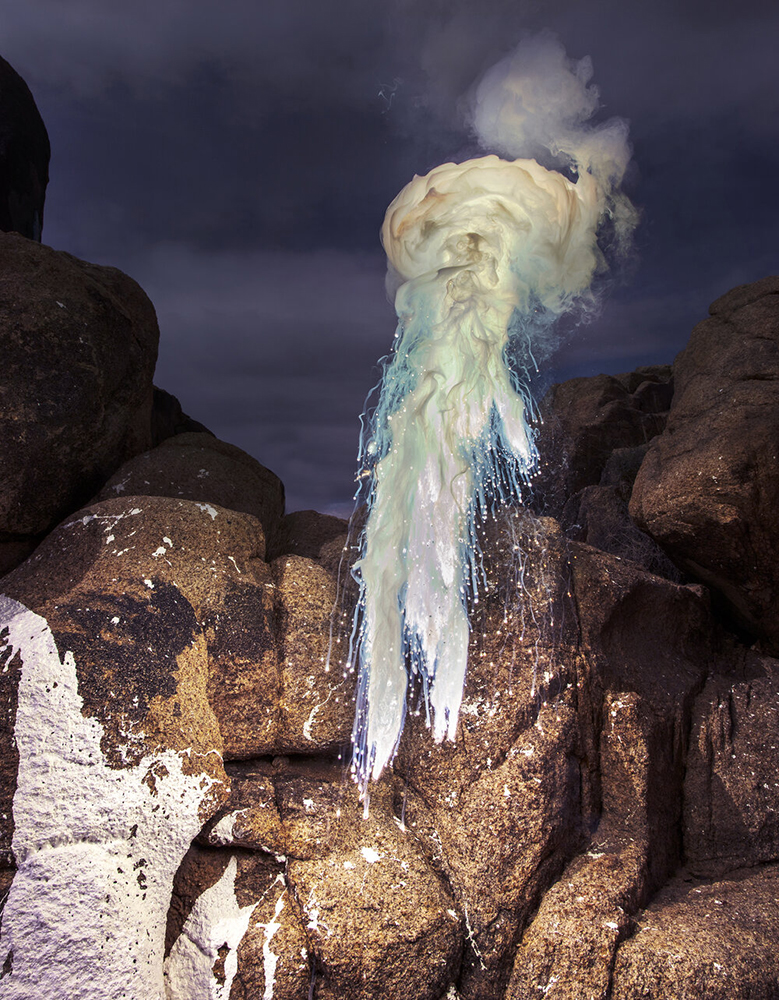 My work has centers around a phenomenological, systems- based inquiry into humanity’s contemporary relationship with the five classical elements – earth, air, fire, water, and aether. The resulting images examine the environment, seeking to decipher our complex, evolving relationships to nature, technology, and each other. I strive to challenge my assumptions and deepen my understanding of our environment and materiality. My newest work questions the long- term sustainability of present-day living and reveals the struggles – both practically and psychologically – of inhabiting a planet we are slowly destroying. – Kevin Cooley 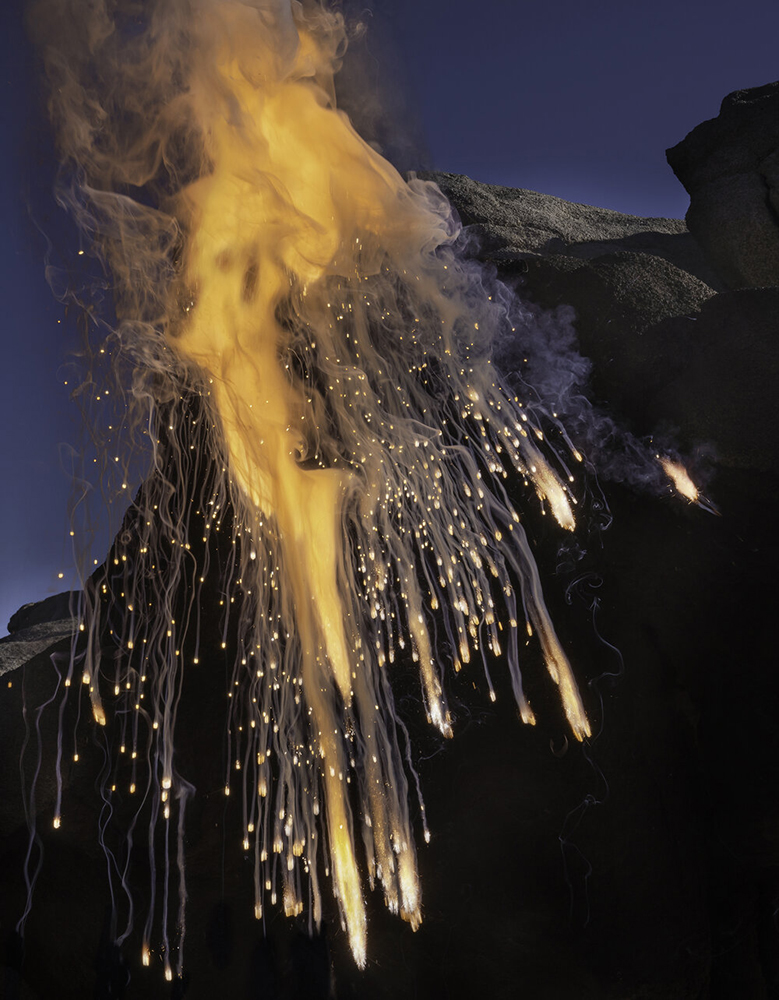 Harlan Crichton: Where did you grow up and how do you feel that this may have influenced your work?

Kevin Cooley: I grew up in Boulder, Colorado, and I believe spending a much time as I did in the Rocky Mountains had a significant impact on how I view nature. Whether it was skiing, mountain biking, fishing, or backpacking, those experiences taught me that we should respect nature’s fragility and its potential while being mindful of our presence in it. 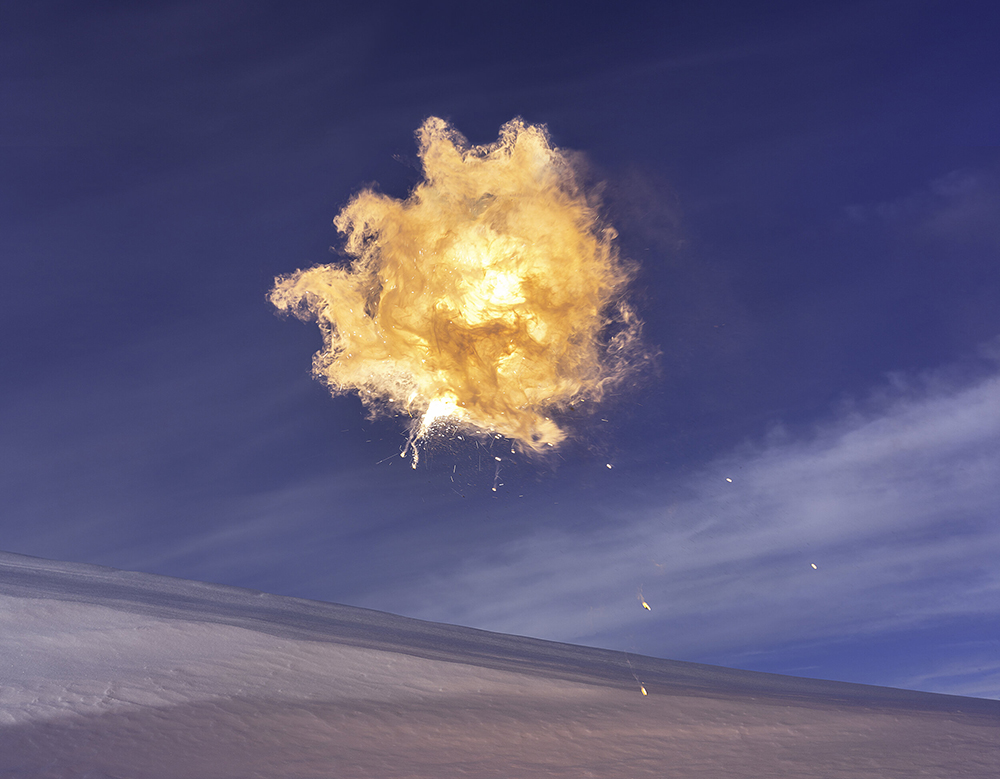 HC: Do you remember the first piece of art that you appreciated?

KC: Growing up, my family didn’t appreciate art, and to this day, I’m not sure my parents genuinely understand what I do. I had a pivotal experience with art in seventh grade while visiting my uncle in Los Angeles. He took me to LACMA, and we spent a long time in the Japanese Pavilion. I have a clear memory of the large-scale landscape paintings, and I noted how beautifully they integrated with the building’s architecture. Even more so, I remember how the sunlight filtered into the Pavilion, and there was practically no need to illuminate the work otherwise. In retrospect, this recollection makes sense concerning my practice is primarily based on light and landscape. 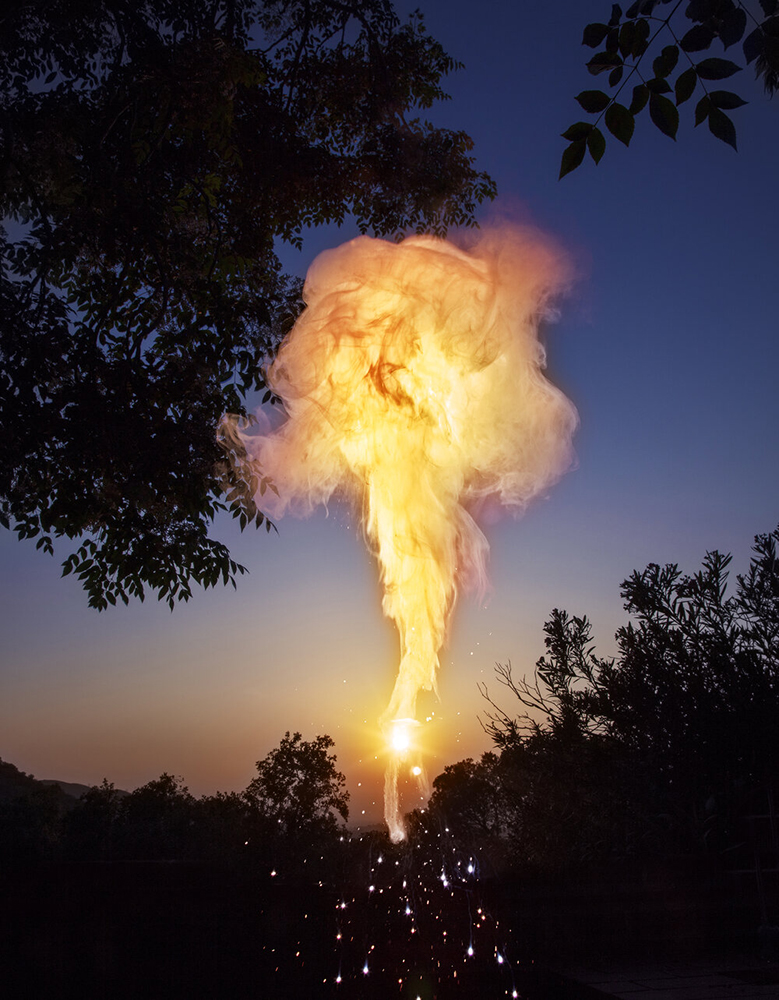 HC: Why did you begin photographing and have those motivations changed or remained consistent?

KC: I was drawn to photography because I wanted to make something concrete, and I have no drawing or painting skills whatsoever. I’ve attempted to do work that isn’t lens-based, something other than photography or video, and it rarely seems to work out. A couple of exceptions are an earthquake drawing machine I made in collaboration with Phillip Andrew Lewis and a series of works on paper created by igniting smoke generators directly below large sheets of paper. 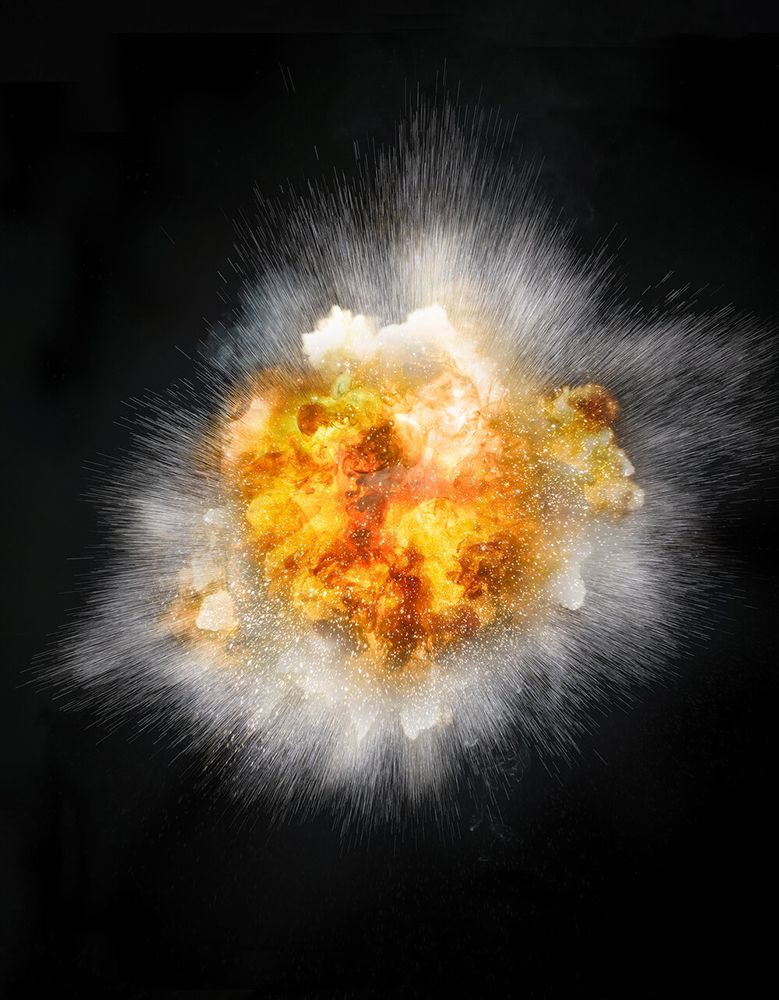 HC: Is there a photographer whose work you find yourself consistently returning to?

KC: O. Winston Link. Nobody else can compete with his ability to compose and art direct complicated imagery at night. He was so far ahead of his time, and the story of his later years is very heartbreaking, as chronicled in the documentary “The Photographer, His Wife, Her Lover.“

HC: What are some of your inspirations outside of photography, and why do they interest you?

KC: About a year ago, a friend convinced me to read a biography of Leonardo Da Vinci written by Walter Isaacson. Leonardo’s successes inspired me, but his failures even more so. He had a lot more failed and unfinished work than completed projects throughout his life. Yet, he continued making significant contributions until the very end. Being a mid-career artist, I’ve been thinking a lot about whether I can accomplish as much in the next twenty or thirty years that I have in the past twenty-five, and Leonardo’s journey resonates with me. Since reading the book, I listen to a lot of interviews with successful creative people. I’ve found Mark Maron’s WTF podcast to be the most interesting because he’s excellent at getting his subjects to talk a lot more about their past than whatever project they are trying to promote. 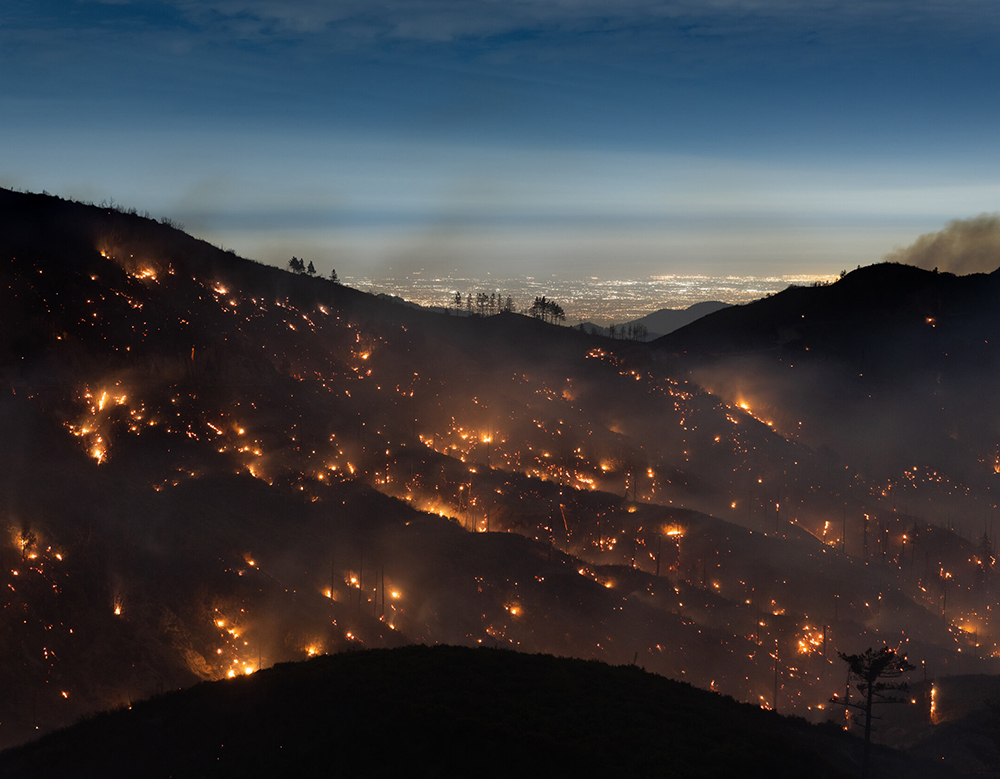 HC: Your work deals with humanity’s relationship with the primal forces of nature; earth, air, fire, water, and aether. What attracts you to these primal forces?

KC: Nature is such a vast subject matter. Dividing it into the classical elements is a way to focus the scope of a particular project. I am interested in how these elemental forces contend with each other and how we can withstand them. My hope is one day to show all of this work together in a single exhibition. I would like to see how the projects interact with each other, mimicking how these forces connect and intersect in nature. 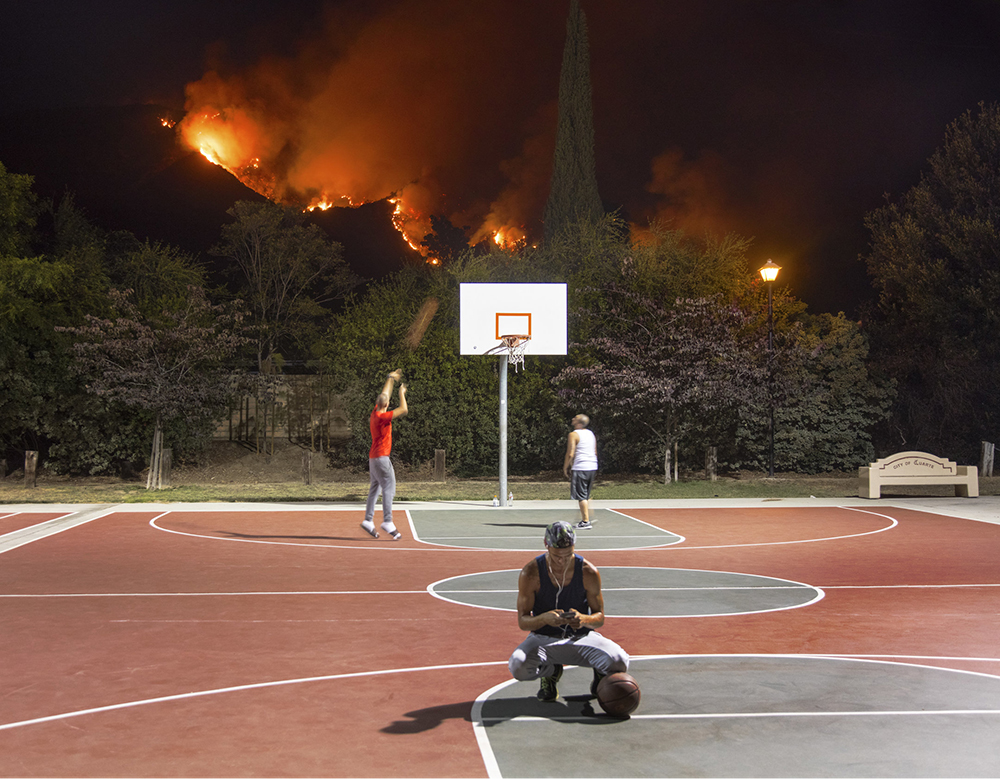 HC: What draws you to make a new body of work?

KC: The connection between my different bodies of work feels like it should be a natural flow from one to the next. The reality is that I often struggle to make these leaps and commonly feel adrift in between projects. With each new project, I strive to venture into new territory, which can be challenging. Sometimes I wish I would spend more time on a singular idea rather than coming up with something entirely new all the time, but I don’t think that will happen.

HC: When you are engaged in the act of photographing, what excites you?

KC: Being in the moment, I’m enthusiastic about making the most of it. Even after making photographs for so many years, I still can’t tell until later in the editing process if I’ve gotten anything good. Even then, I often need even time before I know for sure. I miss the days of working with polaroid film. There was something so exciting about looking at those while you are shooting. That immediacy that happens with instant film can’t be replicated with digital. 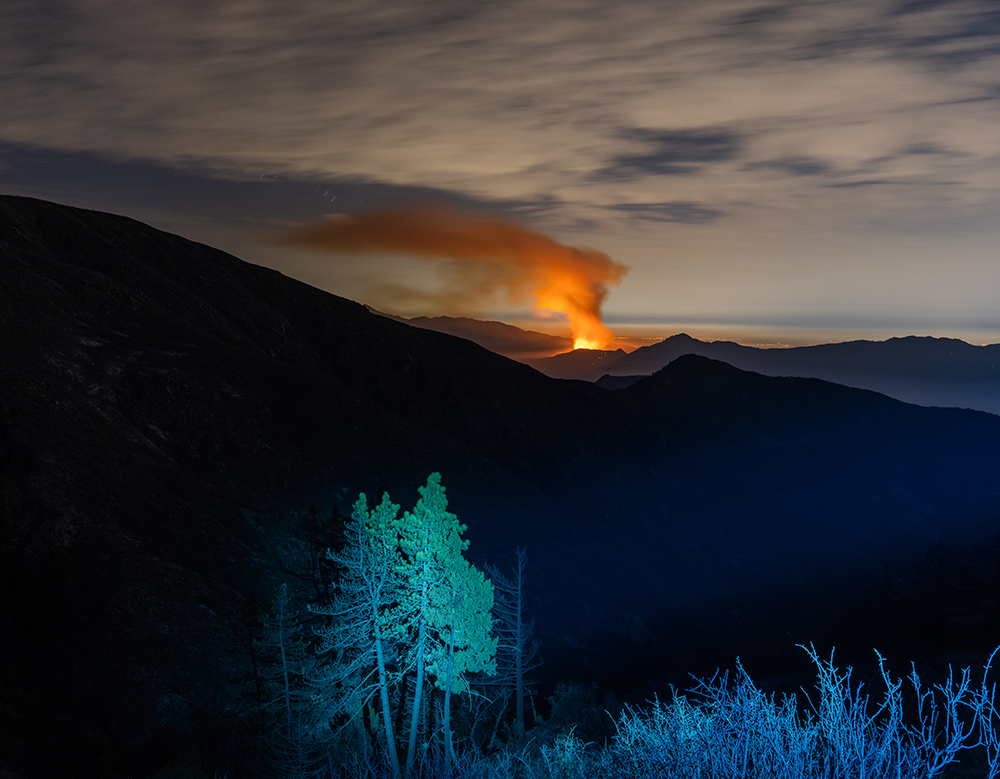 HC: Are there any moments that were not able to become photographs that stick out to you?

KC: Yes, there are plenty of moments that didn’t become photographs or at least good ones. When I was doing a lot of work on assignments, I found myself in situations that I didn’t find visual at all. Sometimes I would rise to the challenge and create something out of nothing, but I often came up short. There are plenty of moments that didn’t work out with my art projects as well; the timing was off, technical failure, poor conceptualization, and poor composition. I believe there are no reshoots, but my failures ultimately lead to better images. 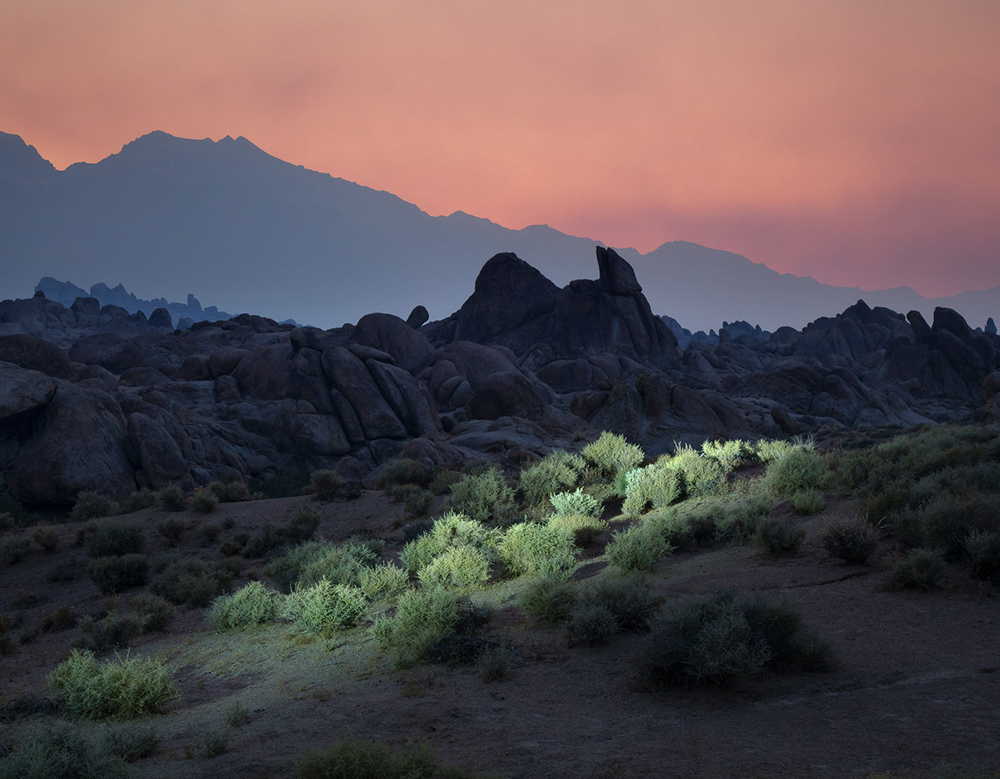 HC: What, do you feel, is an artist’s role in society, and has the past year and a half altered that viewpoint?

KC: I believe the primary role of an artist is to try to make sense out of a world that often doesn’t make sense at all. For a moment, I thought the past year would have significantly altered how artists approach their work and contextualize it. Looking at the art world right now, it is evident that not much has changed or is going to change. 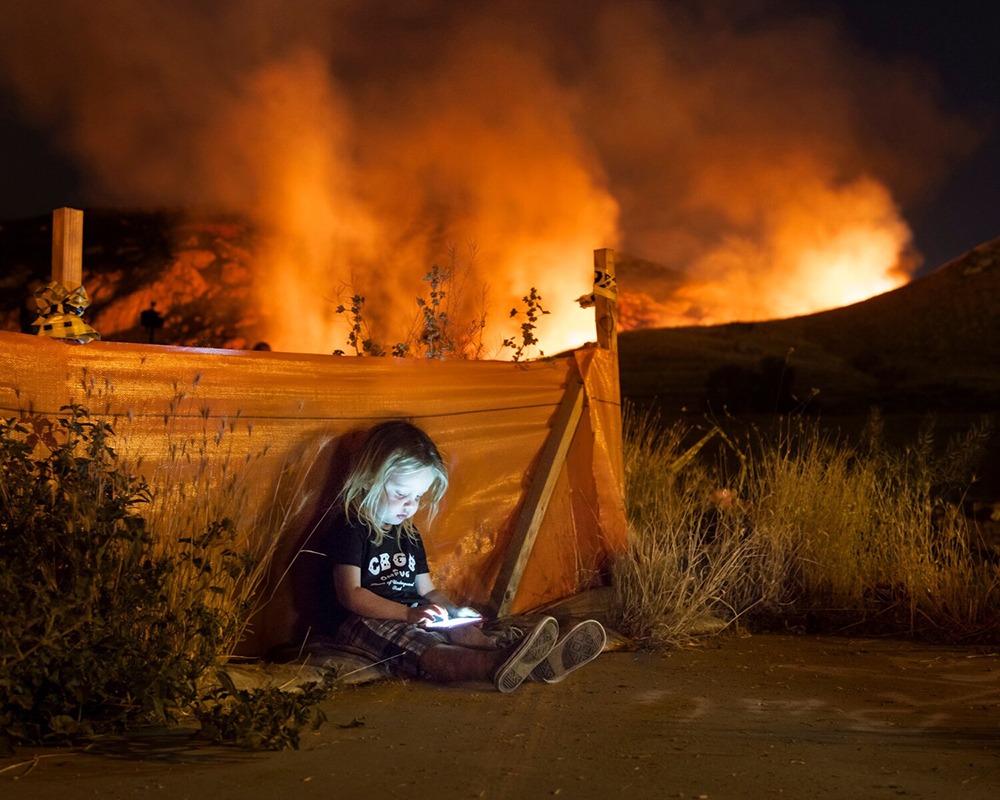 HC: What is next?

KC: I currently have a solo exhibition at Laney Contemporary in Savannah, GA, with a series of photographs and videos called Exploded Views. I started in 2019, and the show feels like a natural end to the project. I’m finishing a book project that tells the story between an eccentric pyrotechnicst and myself. I hope to complete the book this summer. I’ve also been photographing wildfires along the West Coast, so I expect to be busy with that in the coming months. I’m not entirely sure what the next project will be. I’ve been thinking a lot about the extreme drought we are experiencing, especially in California, but I haven’t figured out how to make new, compelling imagery about that? 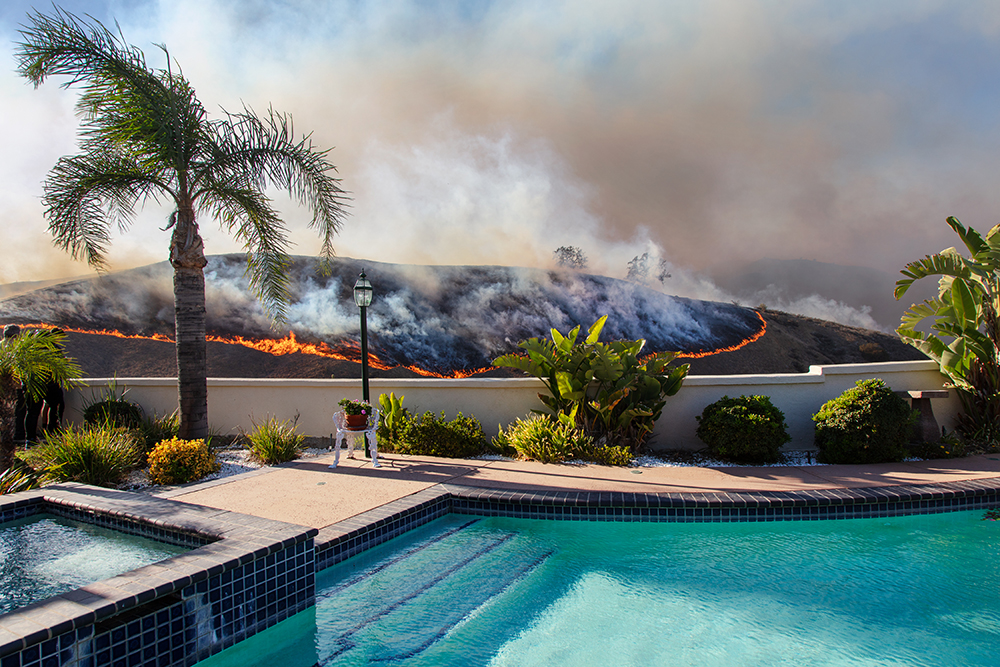 Harlan Crichton was born in Maine in 1990. He was raised in a community of artists in the rural area of Waldo County. He received his Bachelor of Fine Arts in photography from Maine College of Art in 2012. Crichton received a Master of Fine Arts degree from Massachusetts College of Art and Design in photography in 2020. Through photography, video and writing, his work focuses on personal narrative, rural legends, symbols of distress and the extremes of the human experience. Follow Harlan on instagram: @harlaaaaaan 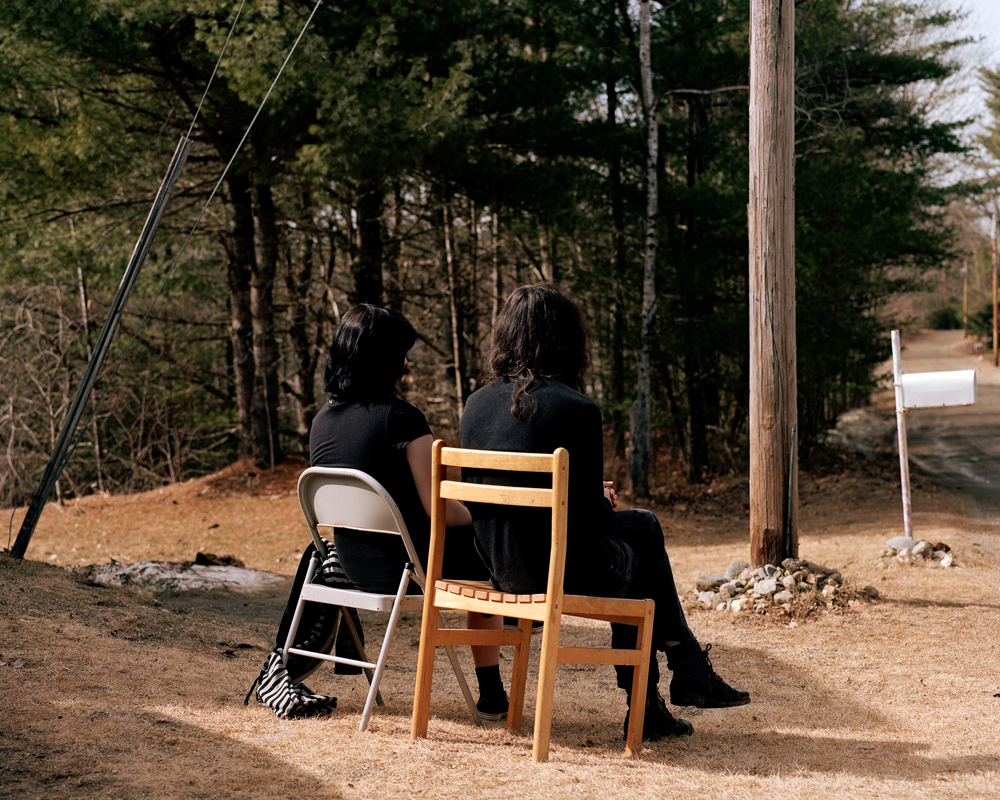 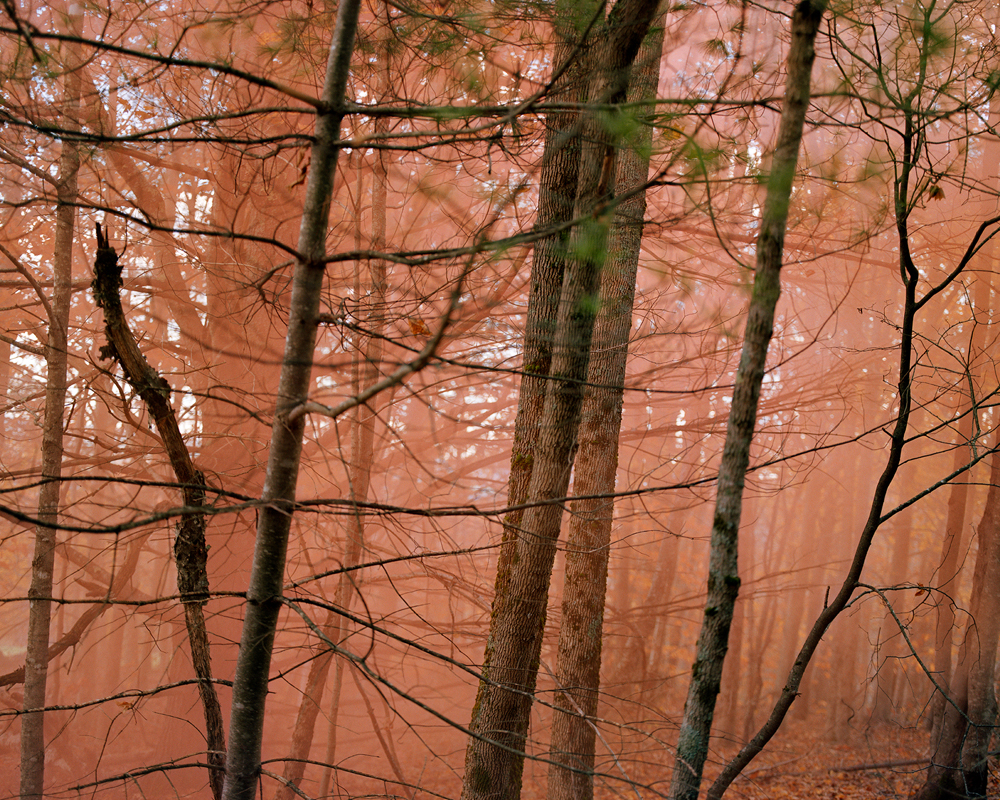 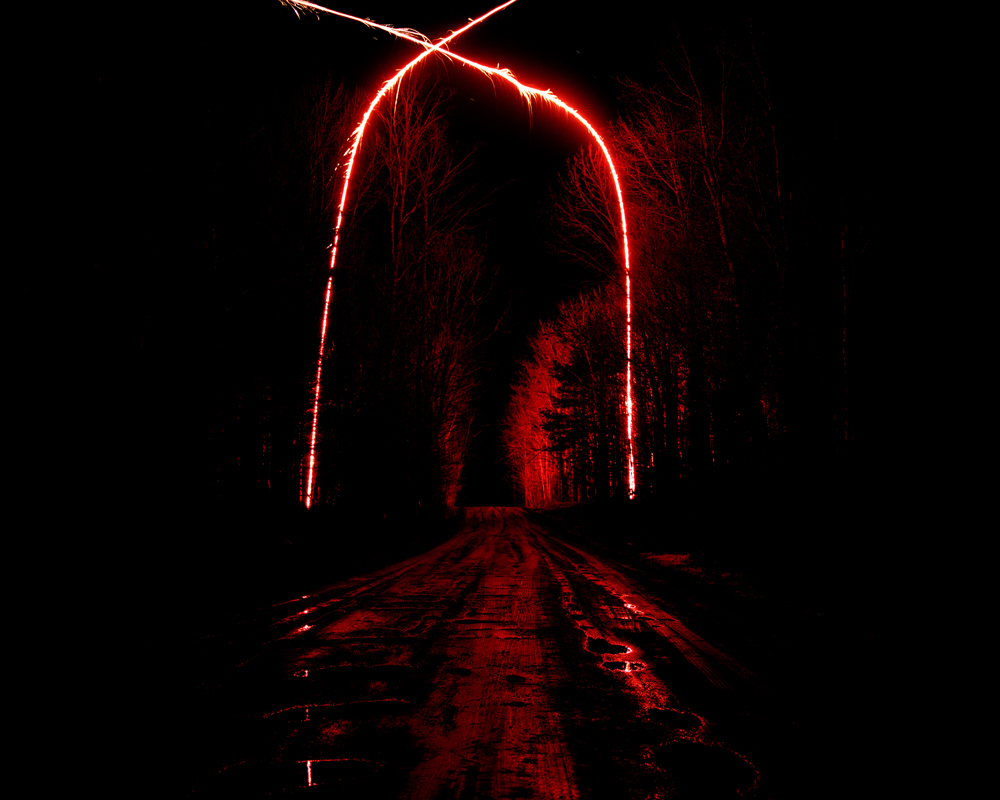