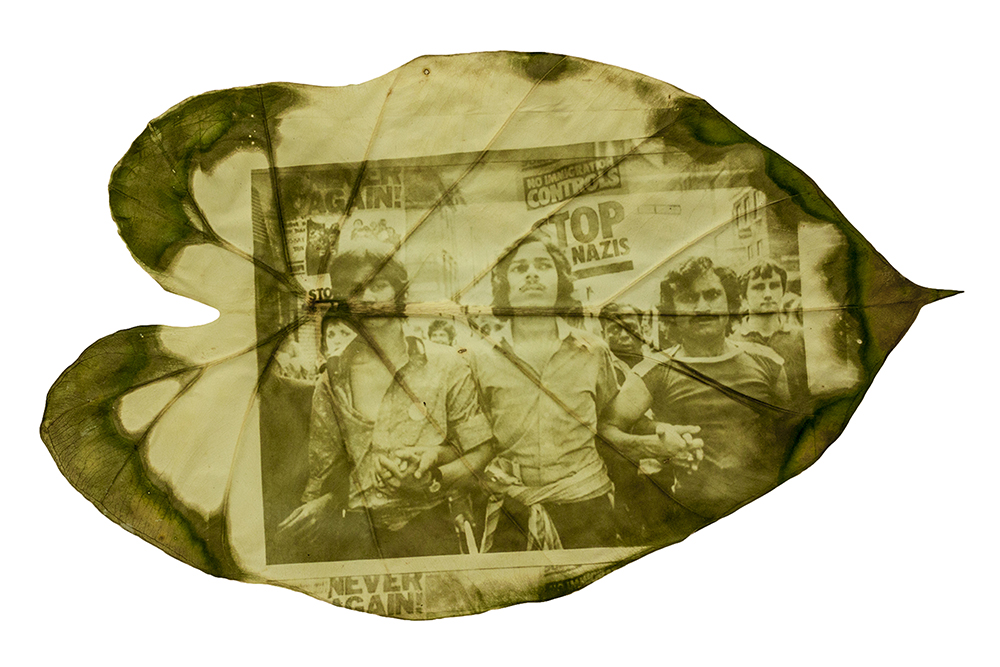 “One way or another, we all have to find what best fosters the flowering of our humanity in this contemporary life, and dedicate ourselves to that.” – Joseph Campbell

An idea I have constantly grappled with is the idea of humanity. How is it each human being experiences similar events yet each of us is entirely unique? Due to my curiosity about how others perceive this question, I have interviewed artists that use particular photographic processes to dissect the idea of what it means to be human.

In my time as an undergraduate student, I was exposed to several types of alternative photographic processes. Each was a new and exciting way to interact and connect to the images I was making. Amidst the other processes I experimented with, creating anthotypes using plant based material, quickly became the most challenging process. The unpredictability of the plants and the weather made it difficult to create the images I wanted.

When I came across Almudena Romero’s work during my research, I was astounded. The way her images are so prominently printed on the leaves she used show a real knowledge and passion for this type of process. In addition to her care and precision in the process, the material of her work is vital to understanding our history and how our “humanness” affects the rest of the world.

Romero has received public art commissions from Wellcome Trust, Emergency Exit Artist, Team London Bridge, Southwark Council and Bow Arts Trust for the London Festival of Architecture. Her practice has been published in monographs by the Photography Archive and Research Centre at the University of the Arts London and by Fisheye (upcoming) and featured in BBC Four, BBC Two, FOAM Magazine, EL PAIS, Liberation, VOGUE, Radio France Internationale and other international media.

My practice uses photography as a tool for research and reflection. My works reflect on issues relating to identity, representation, and ideology, focusing on how perception affects existence and how photography contributes to organizing perception. In recent projects, I use photographic processes occurring in plants like photosynthesis, photoperiodicity and photobleaching to create photographic artwork. My latest work, The Pigment Change, led me to understand plants not just as subjects and objects (substrate) of my photographic research, but as creators of art. The Pigment Change shifted my views of plants as hosts of photographic processes to performers of photographic processes. I am now interested in developing work where plants are acknowledged a leading active role, discussing discourses and practices of differentiation and exclusion of other species in the art industry, as well as the underlying politics and economies of this exclusion. -Almudena Romero 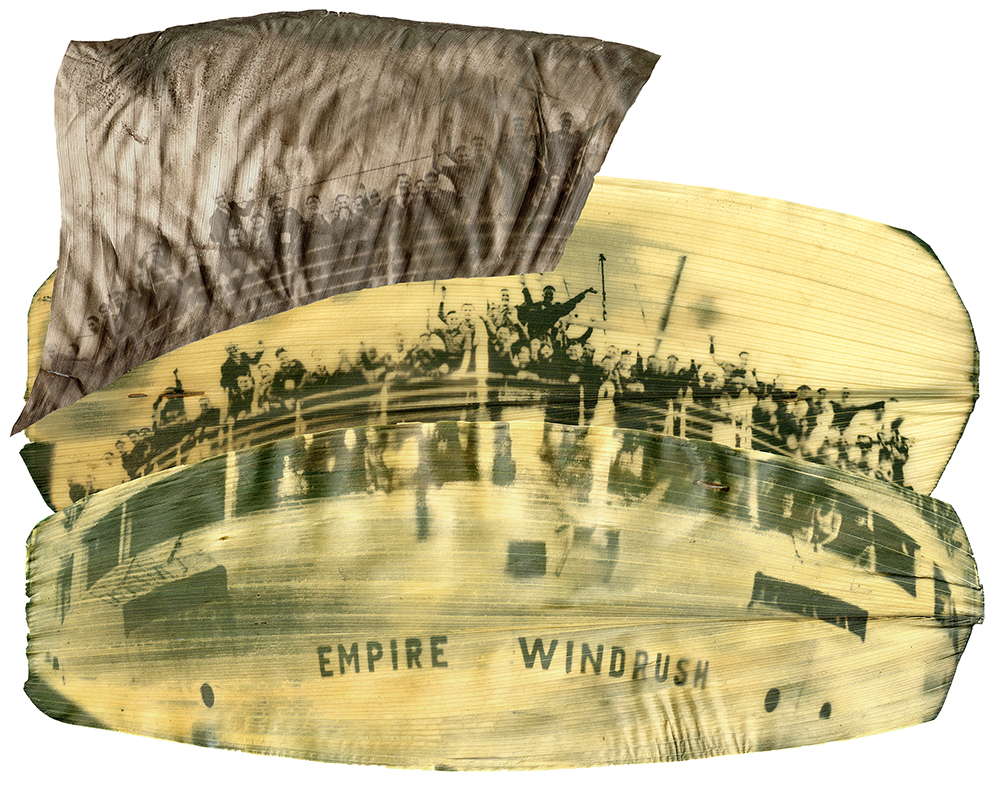 Almudena Romero: I started to work in photography in 2008, back then I was working in a commercial photography studio taking portraits. In 2010 moved to photojournalism, and in 2012 I went to London to study an MA in fine art photography. During the master program I became less interested in the photograph as a document, but on the photographic as a tool for research and self-expression. At that moment I started to use photographic processes that allow me better to reflect on issues relating to identity, representation and ideology.

I became an expert in 19th-century photographic techniques, particularly in one called wet collodion. In 2016, as I worked on five different projects with the Victoria and Albert Museum, the Mitsubishi Ichigokan Museum and Fundacion Mapfre Madrid, related to the wet collodion process, I became more aware of the impact of the chemistry I was using, on the environment and on myself too. A desire to develop a more sustainable practice grew on me.

Much of the research on plant-based photographic materials and on using photosynthesis and other plant photographic processes to make photographs was developed in the 19th and early 20th century, so it wasn’t difficult for me to come across John Herschel’s, Hans Molisch’s and Theodor Engelmann’s publications, amongst others.

I also had my wonderful grandma’s garden and the interest in plants she had cultivated on me, and my sister, who as a leading cancer researcher laid bare the risks involved in using photographic chemistry. My expertise in early photographic processes, the expertise and input from others, and a will to live and work in a more sustainable manner, made me move from the darkroom to the garden over the past few years.

I started to work on the series Growing Concerns after a visit to Convent Garden Market. I was shocked by the visualization of traffic. Flowers and plants from all over the world are imported daily from countries whose citizens face great barriers to migrate. It was this parallel between the historic facilitation of the movement of goods and the increasing restrictions on movement of peoples, that drove the work. Growing Concerns underscores the unsustainable rift this parallel dynamic creates, even so more as climate-related migration to fertile and habitable lands intensifies.

The series examines how the trade of coffee, tea, poppy, sugar, cotton and other plant-based products, facilitated the development, and continuation, of the colonial agenda. The work highlights the impact of current trade routes on dispossession, migratory fluxes, and global inequalities. 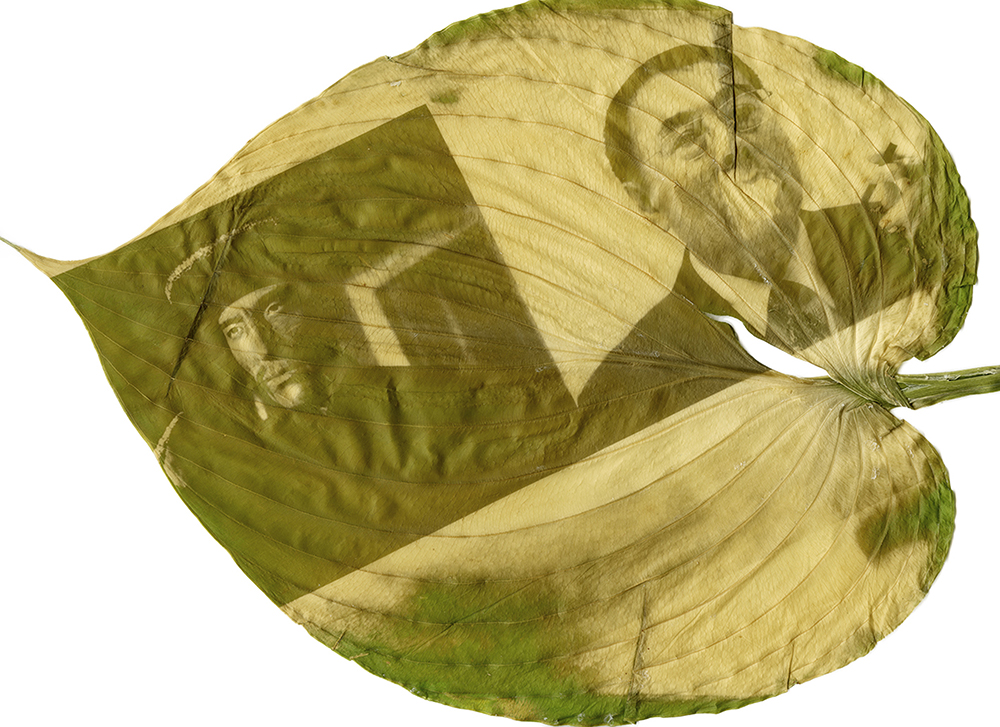 KE: Humanity encompasses a vast array of emotions, actions, ideas, and thoughts. How would you describe your work in terms of the human experience?

AR: My works focus on how perception affects existence and how photography contributes to organizing perception. Art allows us to explore meanings and develop new understandings of ourselves and others. 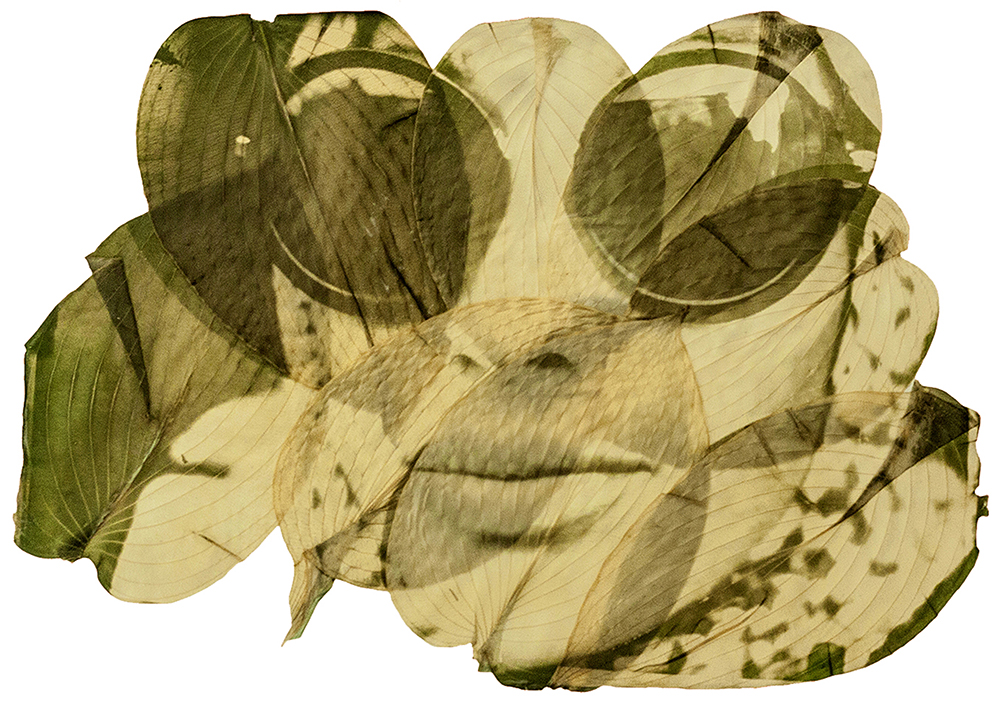 KE: Why did you choose to use these plants? Do these plants have a significant meaning to you or to the image?

AR: Growing Concerns uses plants from former British colonies as canvases to host images that reflect on the links between plant trade, colonialism and migration, and the legacy of these in modern-day Britain.

In the series, plant leaves become the subject and object of analysis. The leaves are used as the photographic substrate while being the central element of an image-based research methodology exploring systems and histories of differentiation, exclusion and inequality. The works bring together an experimental approach to sustainable photographic materials with the scrutinization of a pressing social issue. 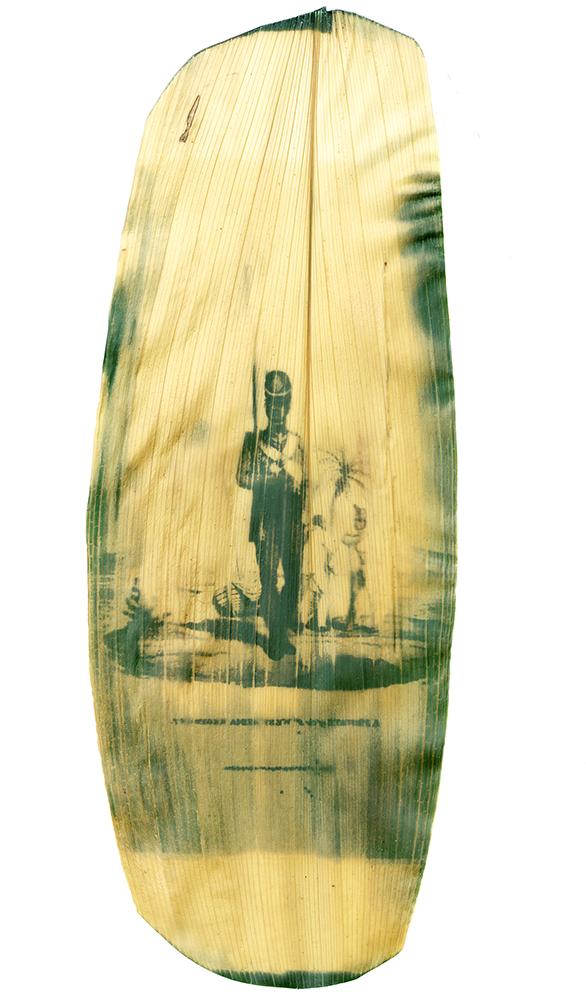 KE: In these photographs, you appear to have several different subjects. Would you discuss your thoughts on the subjects you chose to feature in this project?

AR: The title Growing Concerns refers to 21st-century challenges, such as the creation of new borders, walls and policies, growing inequalities and global anger. It reflects on the raising awareness of the damaging force of populist movements and the need to strive for equity and justice.

The series utilizes historical imagery: press and cinema images, fashion shots, portraits of abolitionists, Jamaican currency bearing the bust of Queen Elizabeth, photographs of contemporary sports personalities, photographs of lascars (sailors from Asia who settled in the UK), and ayahs’ (women from Asia who worked as nannies in the UK). An archive photograph of the protests against racism sparked by the murder of Altab Ali (a young Bangladeshi textile worker, murdered in east London in 1978); an image of the “Empire Windrush” boat. The series also includes portraits of sports and TV personalities native from former British colonies which held positions once exclusive to an established elite, a portrait of Rabindranath Tagore, and a photograph of black poppies holding firearms. This collation of references weaves a multifaceted, wide-ranging exploration of global migration and colonialism through the narrative of plant trade. The majority of the reference images belong to open archives from London museums and libraries.

Growing Concerns uses photographic processes naturally occurring in plants to allude to historical and current facts and people. Testimony is ‘burnt’ onto plant leaves which have also been traded and colonized, referencing questions of origin, trade and exchange. It considers the definition of ‘nature’,‘natural, ‘native’’, and ‘culture’. What does it mean to be “of” a place? 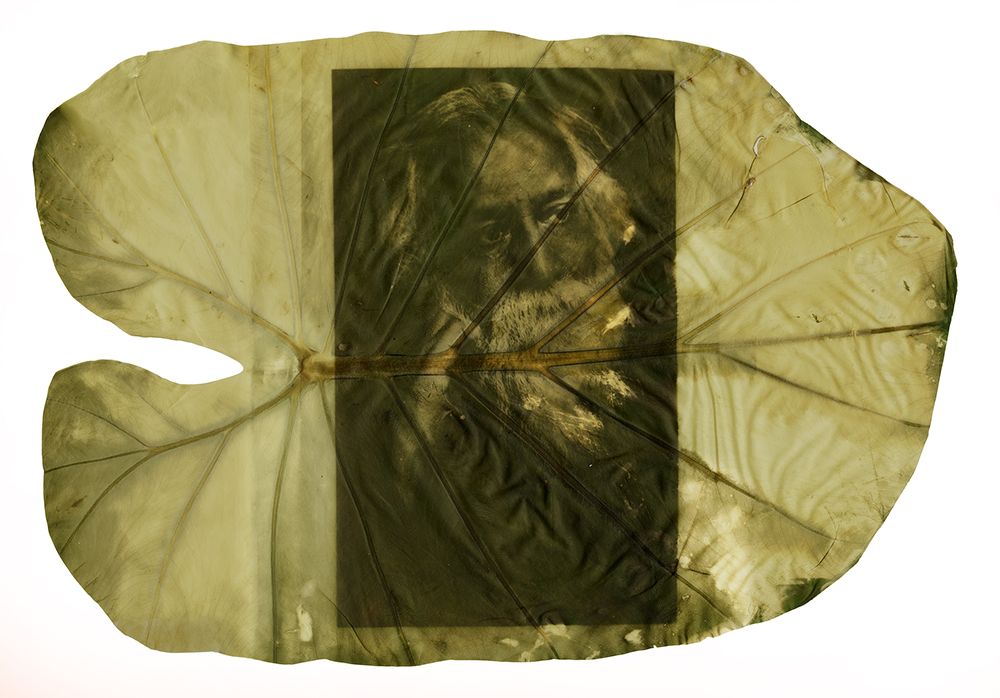 KE: How do you handle mistakes when using alternative processes? Are there times when an error turns into a piece?

AR: Working with photographic processes organically occurring in nature as opposed to chemical processes is a bit more complicated than one initially thinks. It took me some time to get used to working around nature’s calendar and organic variations instead of my own artistic agenda and intentions. It taught me to be patient, to plan ahead, to study, learn and accept nature. The prints are ready when they are ready, they have the traces of the process or mistakes they have, and then they are as ephemeral as a leaf can be. It wasn’t easy to get used to this lack of control where nature dictates, and one navigates those imperatives. Accepting this power dynamic where things happen beyond my control, was a learning curve. 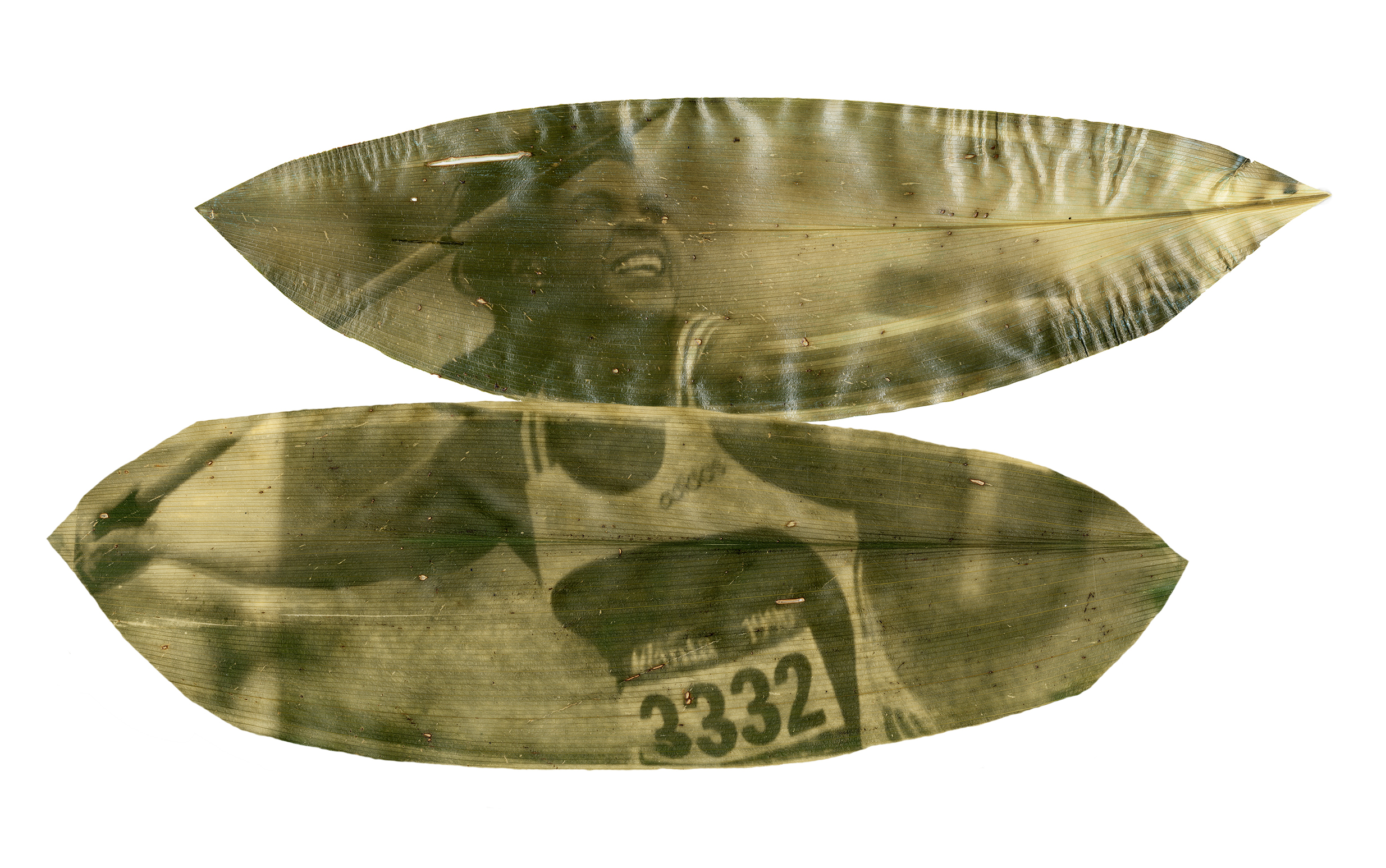 KE: I would like to ask what is next for you. Is there anything you are currently working on?

AR: After Growing Concerns, I developed The Pigment Change project, where I worked with living plants for the first time, instead of cutting the leaves or blending plants to use them as photosensitive emulsion. I explored the relationship between photography and performance, being the plant the performer. Before The Pigment Change, I used plants as photographic material and objects of analysis, but I am now exploring plants’ role in the making of the artwork.

This is where I am heading now, an understanding of plants no longer as the subject and object of the work but as the makers and the embodiment. I’ll be soon on residency at The French National Centre for Scientific Research (CNRS) further exploring plants as photographic artists. 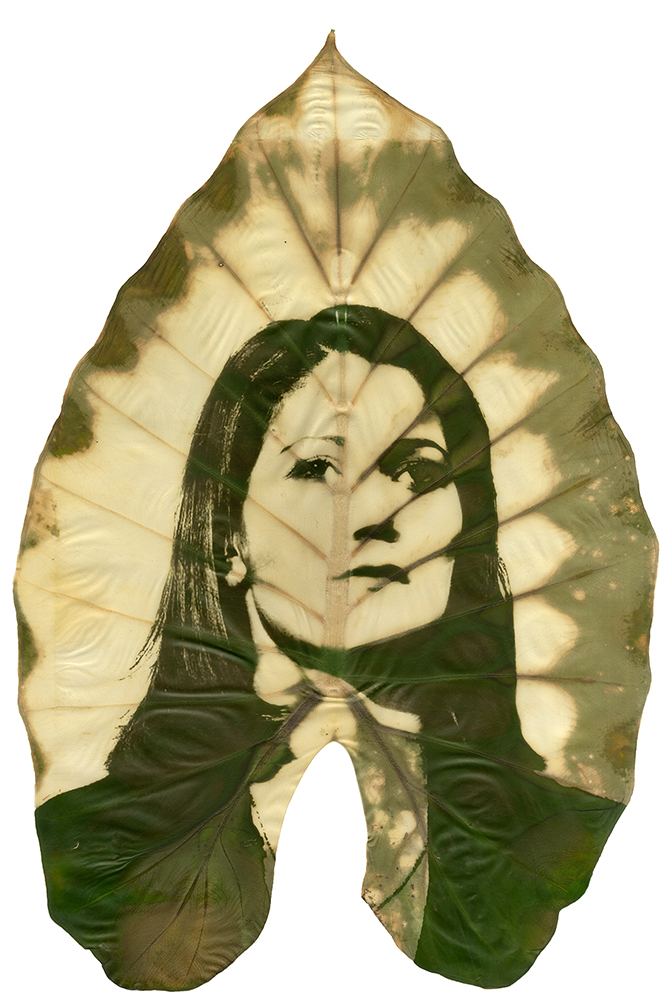 KE: Is there anything or anyone who inspires you? 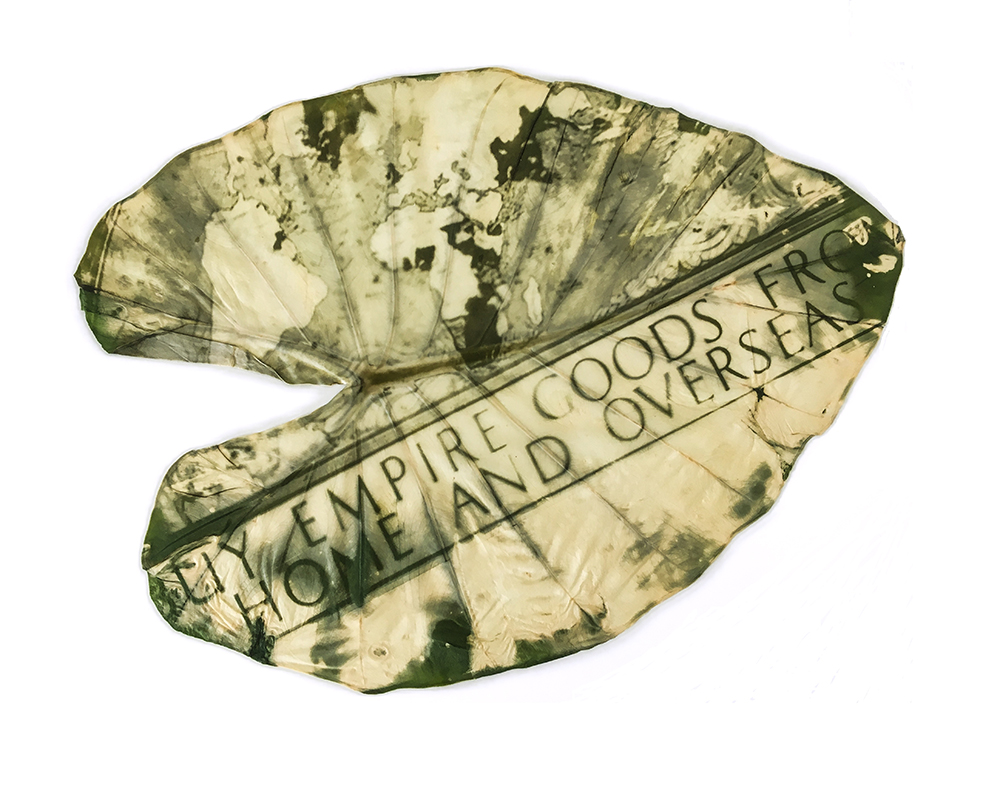 NEXT | The Human Experience Through Alternative Processes: Alice Campos >
< Bill Owens: Suburbia at the Center of Photographic Art | PREV