Bill Owens: Suburbia at the Center of Photographic Art by Ann JastrabOctober 30, 2022

It’s a month for nostalgia! Currently on the walls at the Center for Photographic Art in Carmel is the 50th anniversary of one of the seminal publications in the history of photography: Bill Owens’ Suburbia. Hailed internationally as the ultimate document of the American Suburban experience, this book and exhibition continue to show us who we were and who we are. Owens’ Suburbia project has deepened with time and continues to resonate with audiences throughout the world. A half century later the images have become timeless testaments and a celebration of American life. It is iconic in the history of photography and in the understanding of our society. On October 8th, the exhibition opened with a lecture by Bill Owens who shared 6 decades worth of photographs. Bill also rode a Big Wheel in the gallery, like Richie, of his well-known subjects from Suburbia. It was a night to remember!

This exhibition features 36 large-scale fine art prints of the essential Suburbia images for a new experience of this important project and a unique glimpse into the power of Bill Owens’ vision. There are also 32 small silver gelatin prints (“Baby Bills”) from the original negatives from the late 1960s and early 1970s. The exhibition runs through November 13th, 2022. 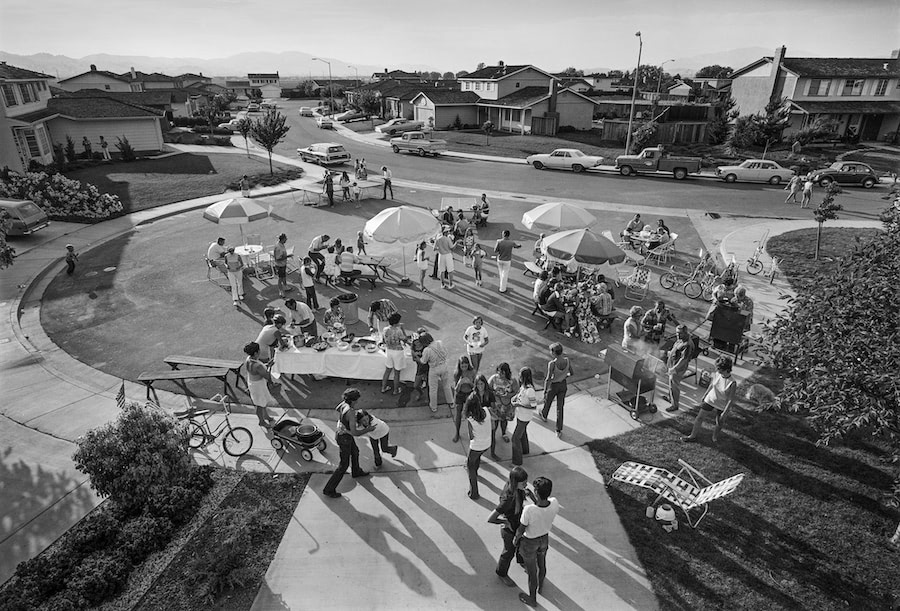 ©Bill Owens, Block Party, 4. This is our second annual Fourth of July block party. This year thirty-three families came for beer, barbequed chicken, corn on the cob, potato salad, green salad, macaroni salad, and watermelon. After eating and drinking we staged our parade and fireworks.

Bill Owens was born in 1938, in San Jose, California, and grew up in Northern California. After volunteering in the Peace Corps, he picked up photography and began his journey as a documentarian. While living in Livermore, California, in the late ’60s, he worked as a photographer for the local newspaper. He became increasingly interested in the suburban areas that became heavily populated after WWII. Owens started photographing middle-class America and would eventually publish a best-selling book, Suburbia, in 1971. Suburbia is considered one of the most important photography books to date. He went on to publish three more books, Our Kind of People, Working, and Leisure, focusing on the suburbanites of America. Owens was the recipient of the Guggenheim Fellowship, which he received in 1976. He was also awarded two National Endowment for the Arts grants.

Between working commercially and on personal photographic projects, he opened one of the first microbreweries in the country. In the past two decades, his interest lies in the craft distillery business. He founded the American Distilling Institute, which publishes a quarterly magazine, and an annual trade show for the craft distilling industry. Bill Owens continues to photograph the odd and colorful world of 21st Century American culture. He is also working on a dystopian science fiction novel, The Delco Years, and on his memoirs, Chicken Heads. The photographs of Bill Owens are highly sought after and can be found in private and public collections such as the Getty Museum, Modern Museum of Art, Metropolitan Museum of Art, National Museum of American Art, Bibliotheque Nationale in Paris, and the Smithsonian Museum of American Art. 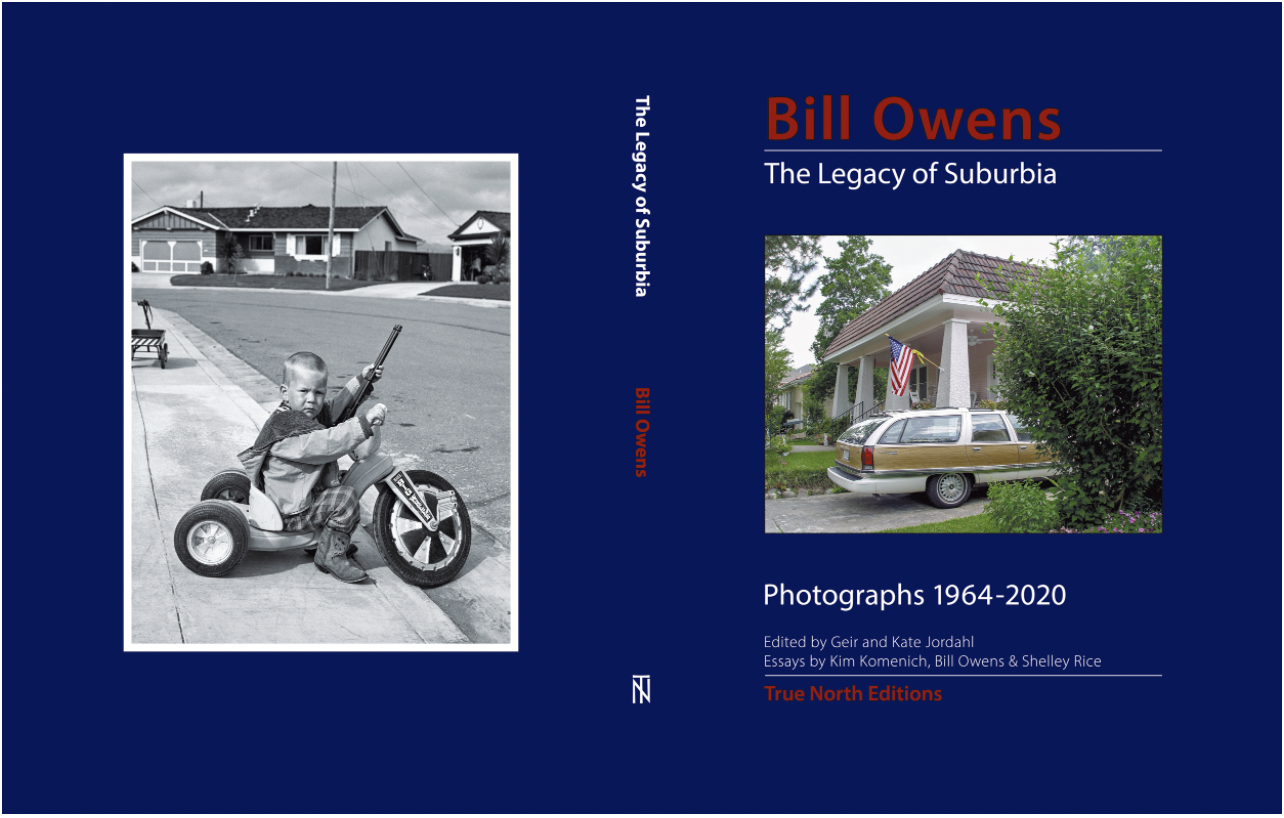 A limited-edition publication, Bill Owens: The Legacy of Suburbia Photographs 1964-2022 is available with a special edition print included. This book features images from Bill Owens’ entire career from his work in Jamaica with the Peace Corp to his current Digital Renaissance. The book is available in an edition of 100. The book can be bought at gallery in Carmel or ordered through True North Editions. 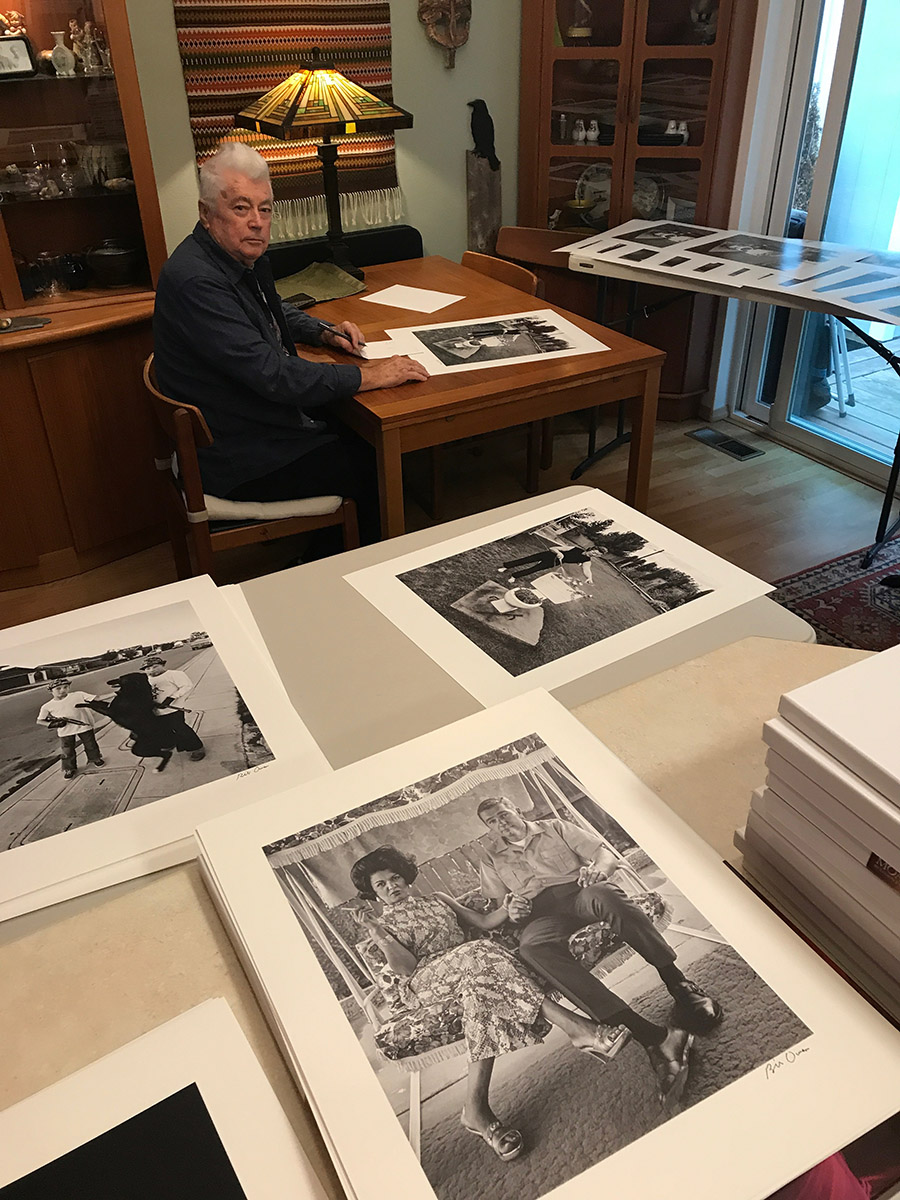 Bill Owens signing books on the 50th Anniversary of Suburbia

A great debt of thanks is owed to Geir and Kate Jordahl for all their work on this 50th Anniversary of Suburbia Exhibition which is on view through November 13, 2022. 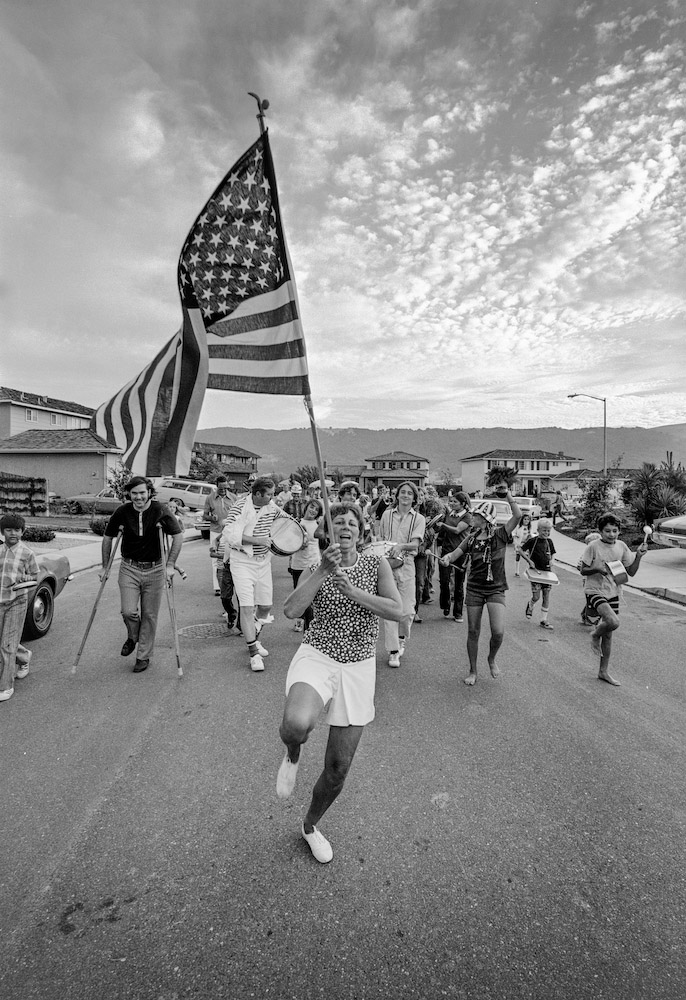 ©Bill Owens, We had a ball on the fourth of July. The whole neighborhood came out for the parade.

Suburbia is about my friends and the world I live in.

In the fall of 1968, I began working as a photographer for the Livermore (California) Independent. My daily routine took me into the homes of hundreds of families and into contact with the social life of three suburban communities.
The people I met enjoy the lifestyle of the suburbs. They have realized the American Dream. They are proud to be homeowners and to have achieved material success.

To me, nothing seemed familiar, yet everything was very, very familiar. At first, I suffered from culture shock. I wanted to photograph everything, thousands of photographs. Then slowly I began to put thoughts and feelings together and to document Americans in Suburbia. It took two years.

The photos express the lives of the people I know. The comments on each photograph are what the people feel about themselves.  – Bill Owens, 1972 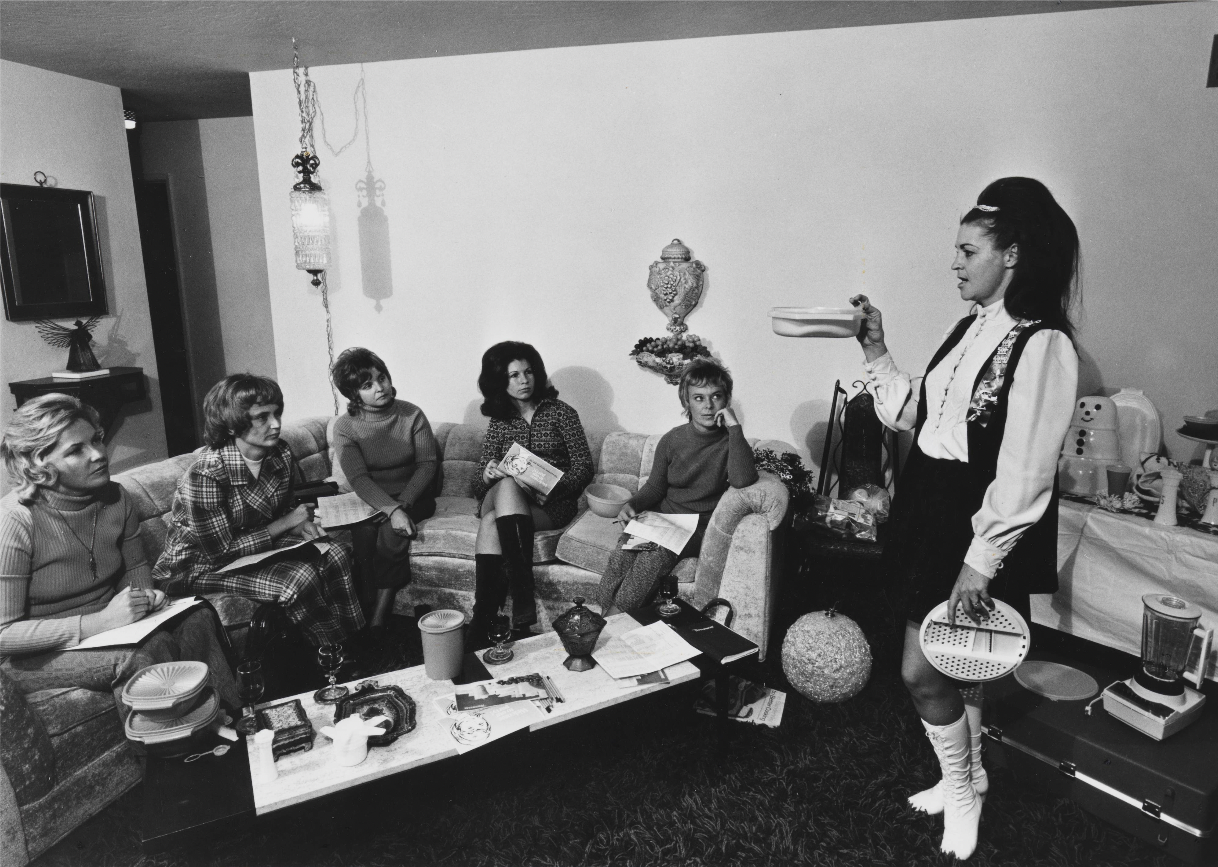 ©Bill Owens, 6. I enjoy giving a Tupperware party in my home. It gives me a chance to talk to my friends. But really, Tupperware is a homemaker’s dream, you save time and money because your food keeps longer.” From the series Suburbia, 1968-1970

The people in Suburbia were all my friends, relatives, or people I had met in the community.

I put ads about the project in the local newspaper, asking people to let me photograph their kids, garage, dog, etc. Everyone was wide open; they would say, “come on over.” I would sit around the coffee table, talking and looking around their house.

Fifty percent of the time, it would be a blank, just nothing interesting to photograph. But sometimes, everything would click. An example of this is the photograph of Richie. One day I’m having a cup of coffee, and I walk outside the house, and there’s Richie patrolling the neighborhood with his toy rifle riding a Big Wheel. – Bill Owens 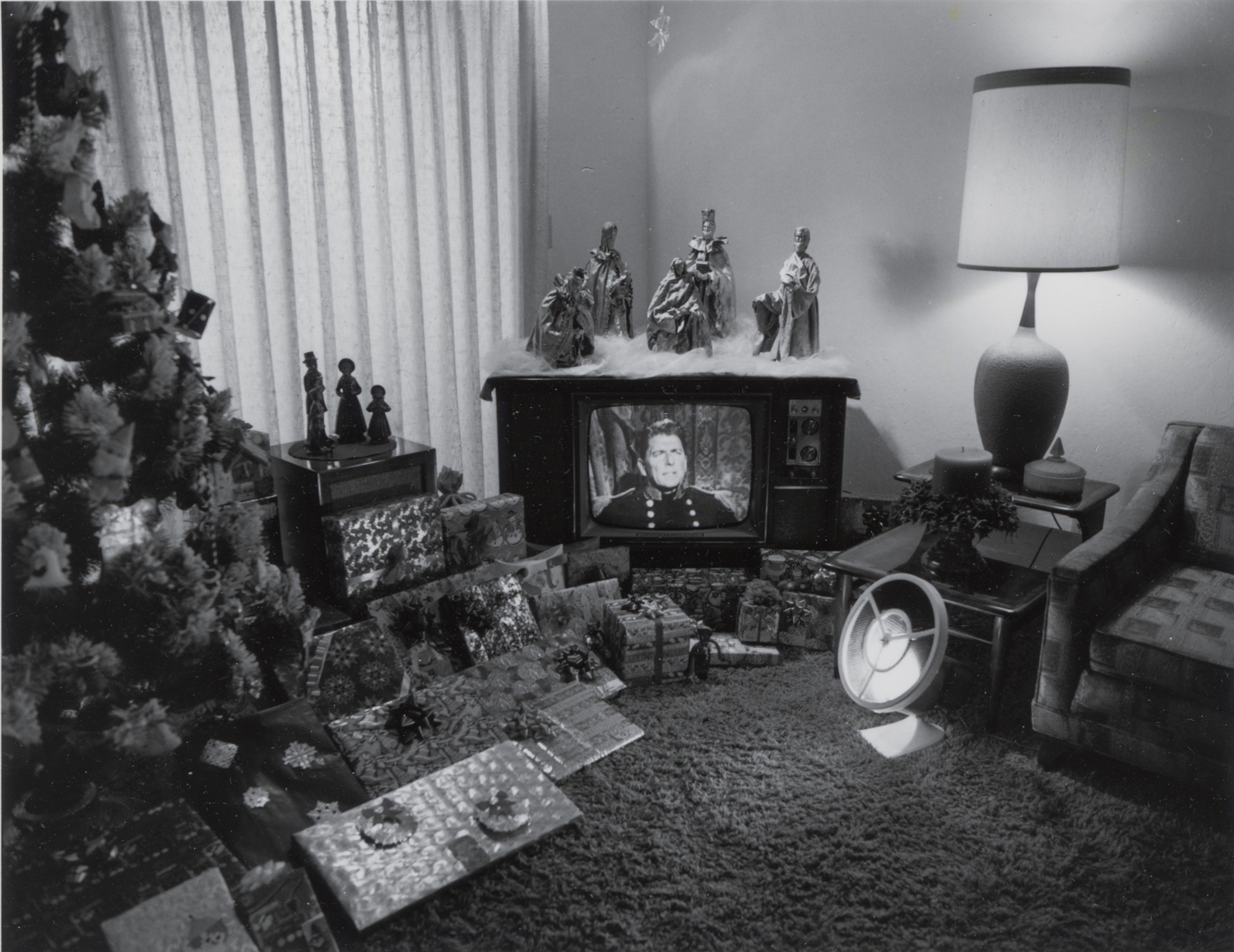 Five decades later, I still photograph people, events, and food. I continue to live in suburbia and love people with all their peculiarities.

I see things that other people might miss in the everyday and the ordinary. Fifty years is a long time, but the essence of who we are changes little. We still strive for a good life and a better one for our children. Local community is what life is about and how we live together is what makes a society.

The prints in this collection represent the best of my work. The details revealed by the remastering of my negatives and the scale of the prints reveal the subtle nuances of who we are. The texture of the chenille bedspread, the small details in a kitchen cupboard, the expression on a face, and even small details not seen before are all revealed by the technology of today. This does not diminish the pictures of the past but rather expands on what I originally saw. The remastered images here reveal the details and range of tones that I hoped to show in the Suburbia project. I am thrilled to have my work shown as never before seen for a new generation. 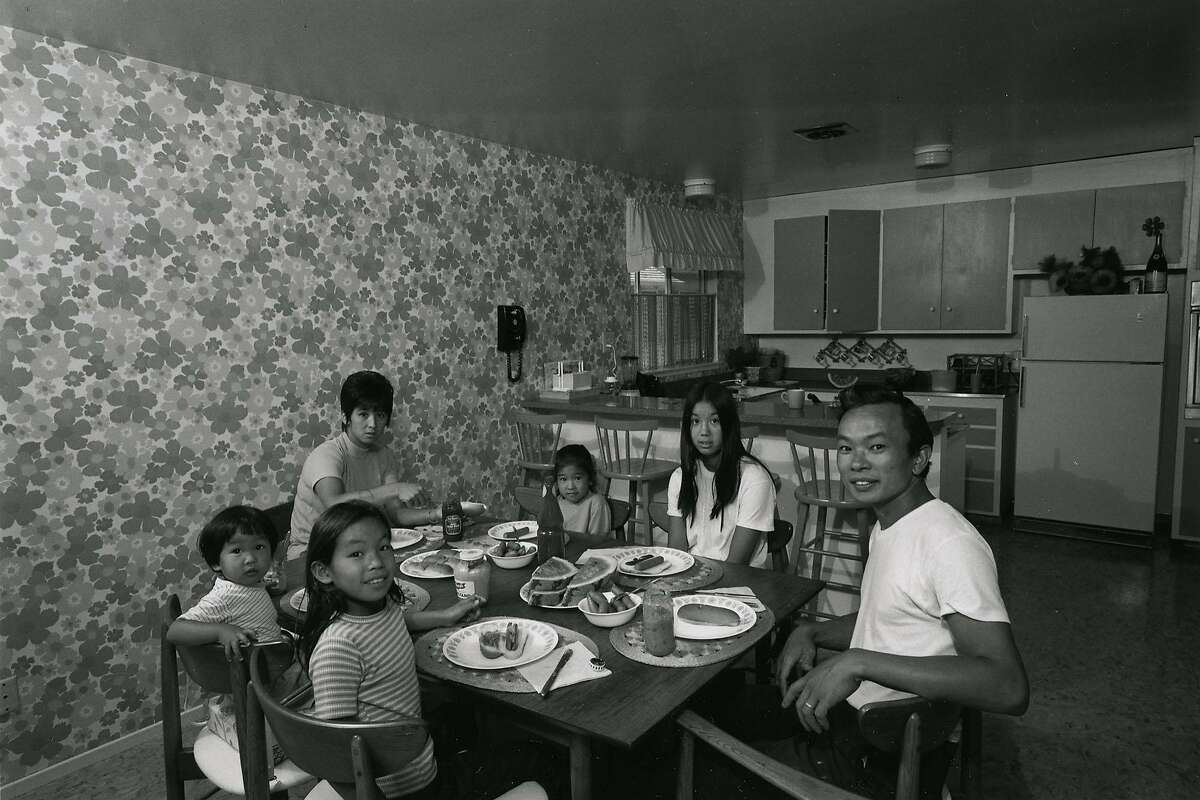 ©Bill Owens, “Because we live in the suburbs we don’t eat too much Chinese food. It’s not available in the supermarkets so on Saturday we eat hog dogs.” 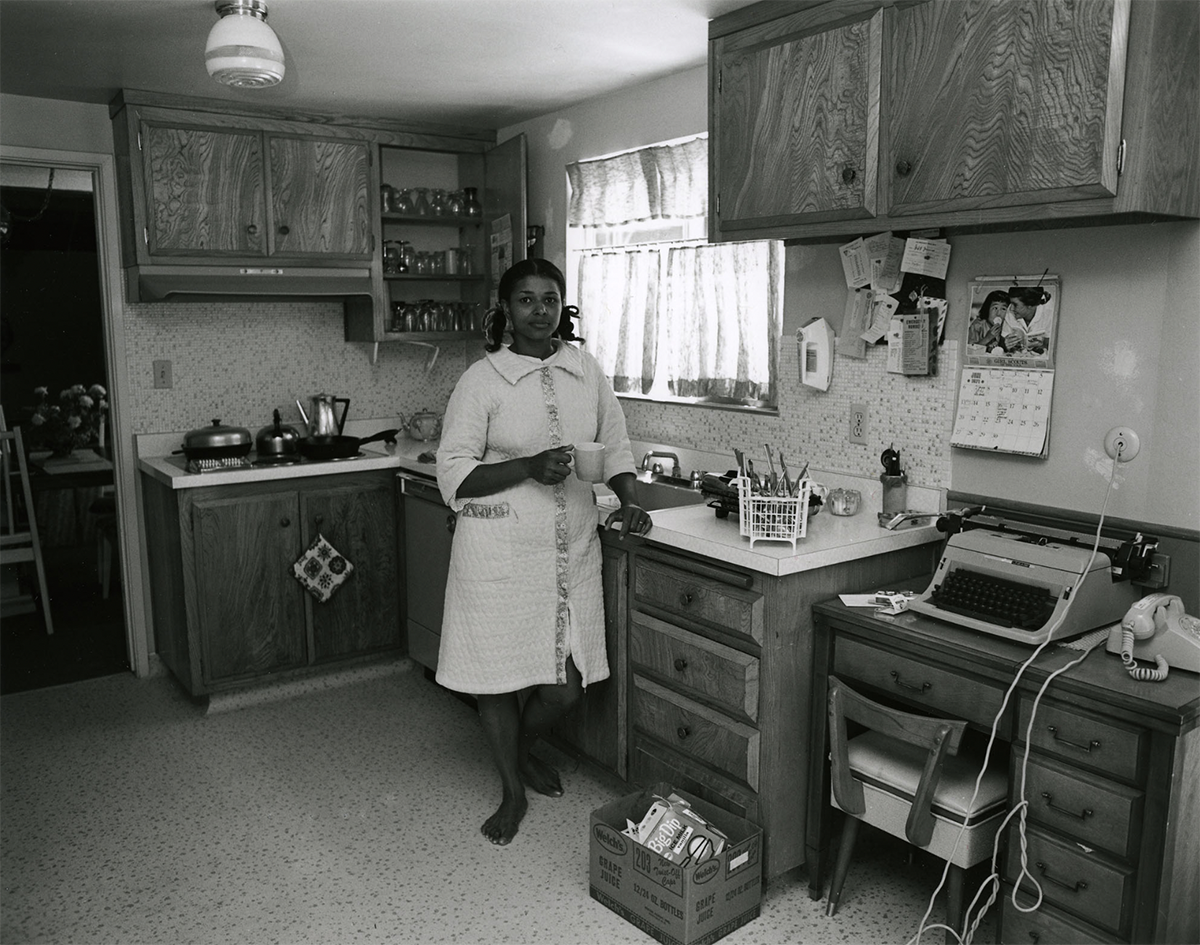 ©Bill Owens, “I enjoy the suburbs. They provide Girl Scouts, PTA, Little League, and soccer for my kids. The thing I miss most is black cultural identity for my family. White middle-class suburbia can’t supply that. Here the biggest cultural happening has been the opening of two department stores.” 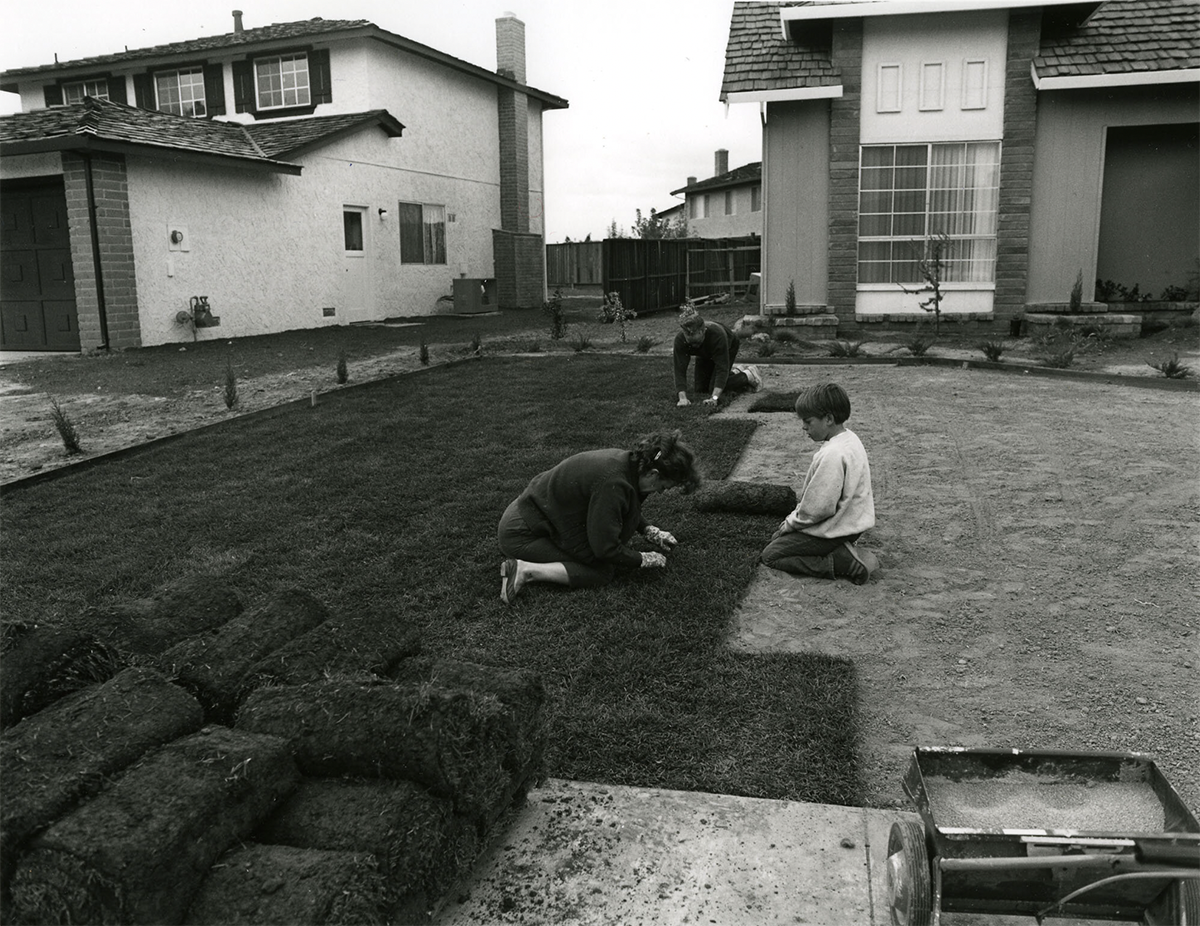 ©Bill Owens, “I bought the lawn in six foot rolls. It’s easy to handle. I prepare the ground and my wife and son helped roll out the grass. In one day you have a front yard. “ 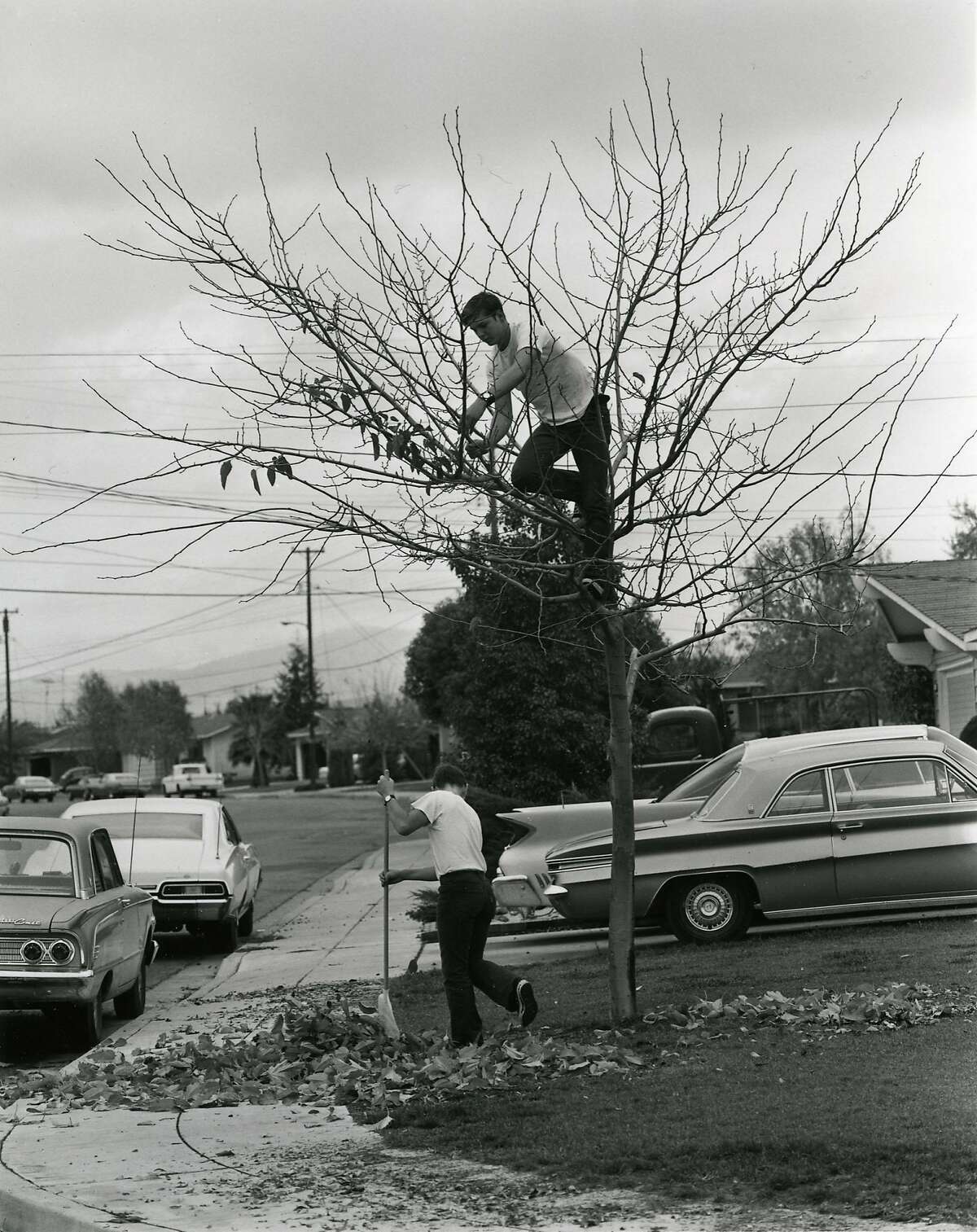 ©Bill Owens, “My dad thinks it’s a good idea to take all the leaves off the tree and rake up the yard. I think he’s crazy. “ 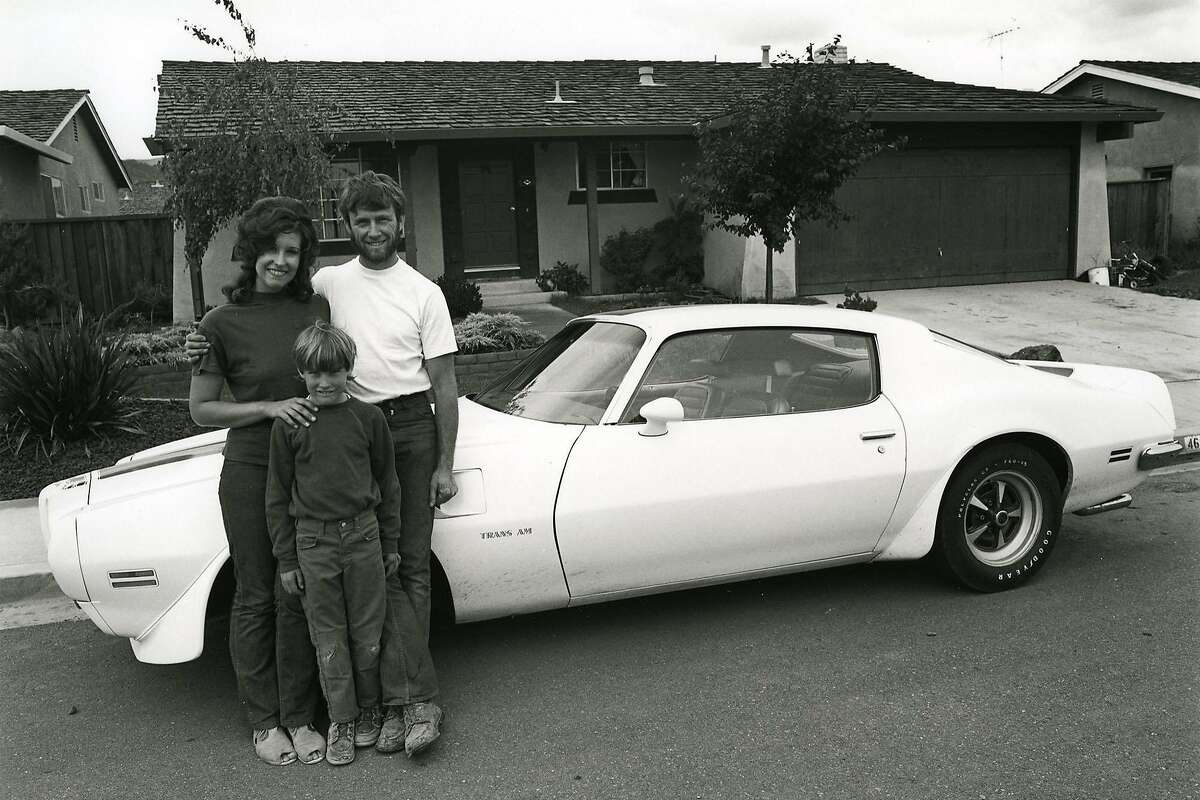 ©Bill Owens, “This isn’t what we really want–the tract house, the super car, etc…But as long as we are wound up in this high speed environment, we will probably never get out of it! We don’t need the super car to be happy; we really want a small place in the country where you can breathe the air.”