Anna Ivannikova: The Letter to Dear D. by Daniel GeorgeNovember 17, 2022 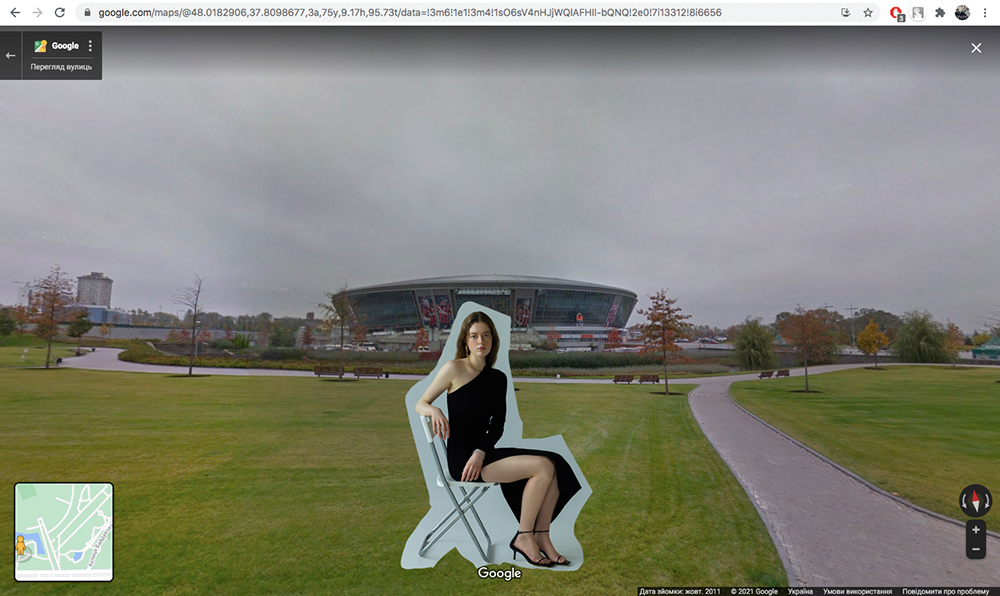 For the past few days, we have been looking at the work of artists who submitted projects during our most recent call-for-submissions. Today, Anna Ivannikova and I discuss The Letter to Dear D.

Anna Ivannikova is Ukraine-based fashion photographer. Her work has been published in various magazines in Europe and the USA, such as Flanelle, LUCY’s , Rebel Mag, French Fries Magazine, cover story Mordant magazine etc. She is a photographer by love and a doctor by training. Her mission is to find aesthetics in the familiar, look at the world around us in a new way. Anna believes that art has a great impact on our lives and can change humanity for the better. 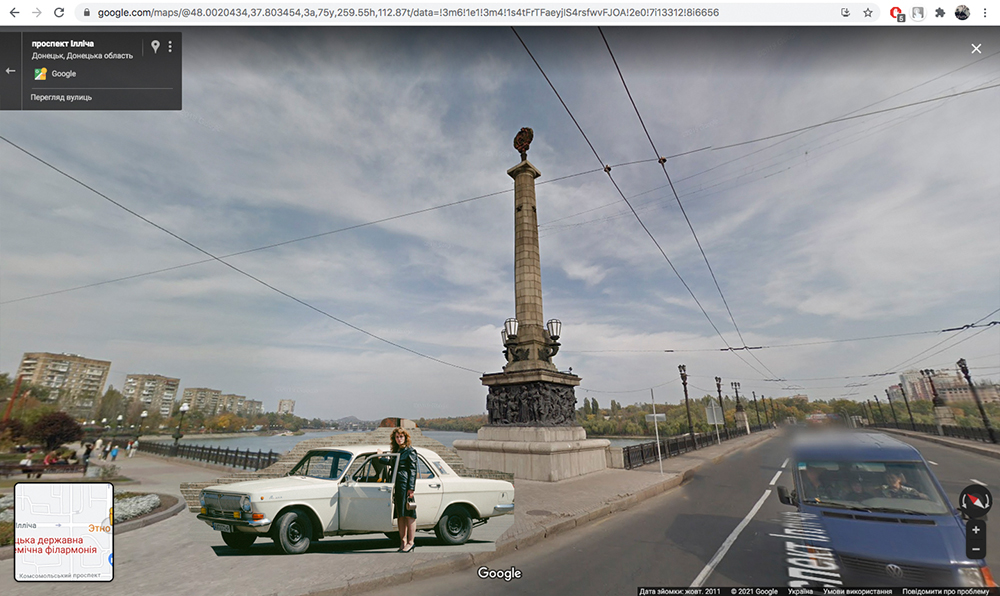 The Letter to Dear D.

“Hello! I’m sorry I disappeared back then … You know I had no choice. Seven years have passed, and I still remember you.

I am very sorry that due to my young age, I did not get to know you better. When we were together, I did not then have a passion for detail, did not like concrete structures and historical monuments.

You know, the fact that we lost each other has changed my life. And I’ll be honest with you … it’s changed for the better. I don’t know what would have awaited me if we had stayed together. But now, after seven years, I feel good.

You know, if we were still together, we would suffer. Seeing you die would kill me in the end.The only thing I regret is that I could not say goodbye to you. If on that May day 7 years ago I had known that this was our last meeting, then I would have hugged you goodbye. Sorry about that.

I’m sure you still remember me, remember those autumn leaves on the embankment, the rumble of paving stones, the flashing of fireworks in the stadium, how I got lost in the huge buildings of the new airport. Do you remember how I was angry because of the minibuses stuffed with people? You watched and smiled. And now I have a subway! Unbelievable! Now I do not need to crowd, get wet at bus stops and make uncomfortable transfers!

I am writing to you after so many years to say that I will never forget you. You taught me a lot and showed me a lot. I imagined how what I am doing now would look like  if you were there. Look at the photos!

My dear D., I don’t know if we will meet again someday, I don’t know if your streets will be painted in familiar colors, and the sun will illuminate what is left of you. Letting go. The main thing is not to miss each other. When the moment comes, we will start all over again. “ 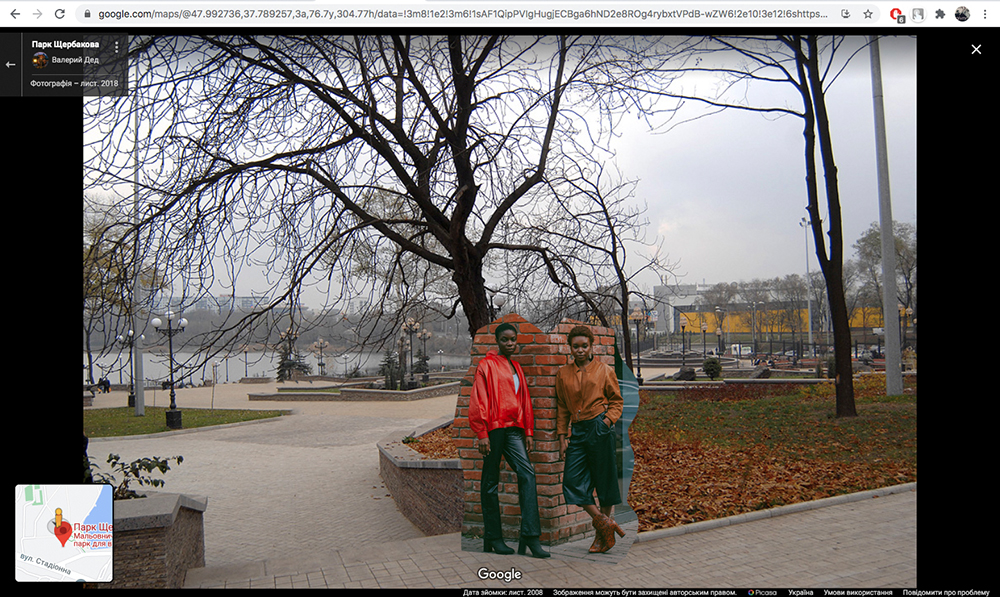 Daniel George: You made this work while living in Kharkiv, after having been displaced from your home city, Donetsk, in 2014. Recently, you had to leave Ukraine altogether due to Russia’s attack on the country. I’m curious how your perceptions on this work, as a love letter to your home, has evolved since February 2022.

Anna Ivannikova: In February 2022 my life was split on before and after again. It felt like finishing a long dramatic book. It is difficult to describe my feelings, and many would not understand them – even those who are still in Ukraine. This is the second time where I had to lose everything that I had and run, to lose sense of the «now», to stop building my future. I closed this book of mine in this letter to my “first” city, and it seemed to me that I would never have to be separated from my place of strength. Then I could see things turning for the better and move on with my life. But sadly, the relief and realization that I had survived a war did not last for very long. 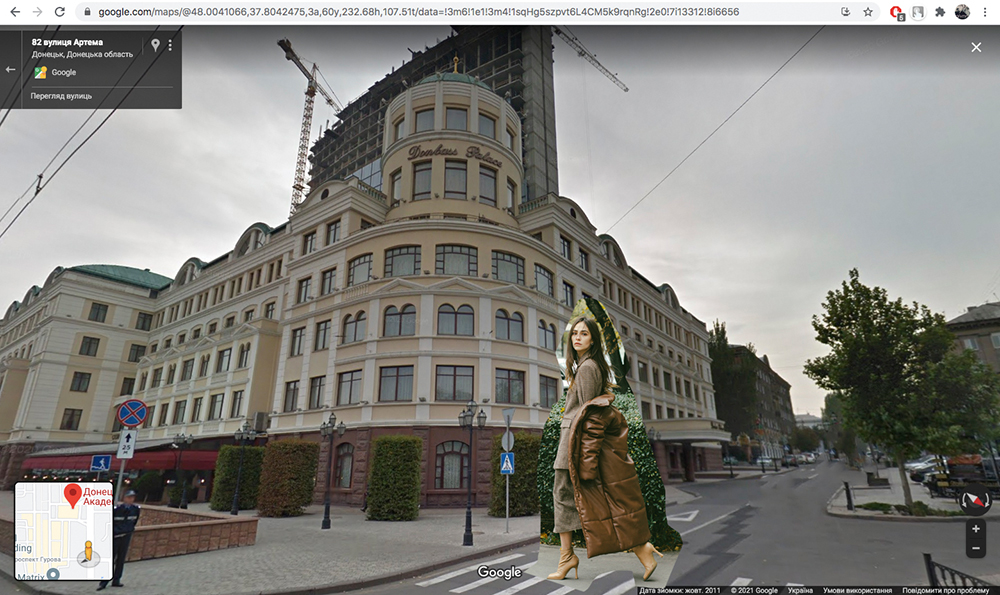 DG: One aspect of this project that caught my attention was the way you talk to “D” as a person. What led you to create this sort of characterization—of place as a being or entity that can feel and remember, the ways that humans can?

AI: For me, «D» in this letter is not just a place. It’s like a close friend or a first love. A person, with whom you shared an important part of your life, entrusted your deepest secrets, grew up with, but then you both realized that this relationship is not working out for both of you. You were now different, and life separated you. This is how it happened with my «D». It so happened that our life together came to an end. 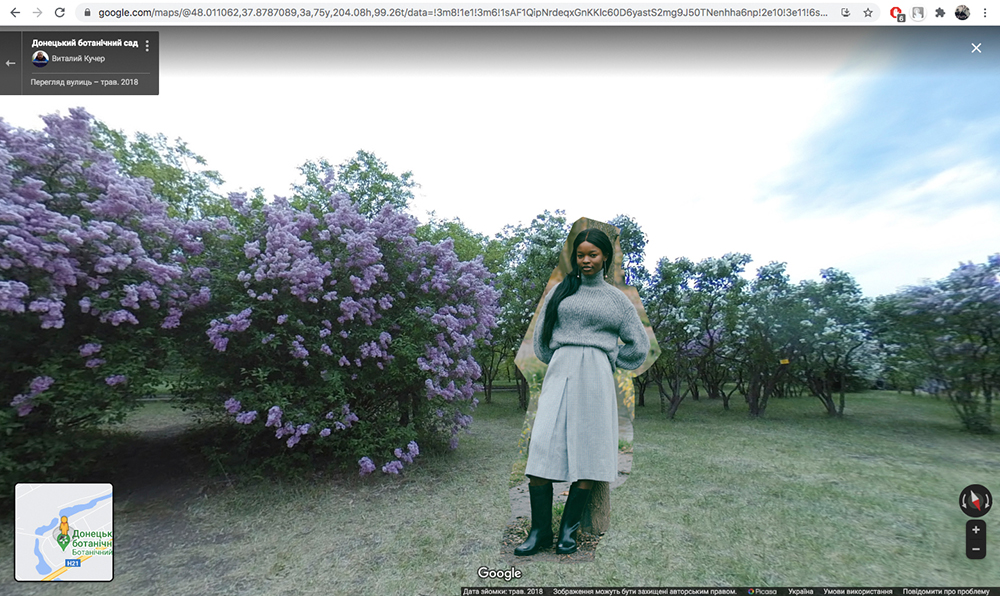 DG: I have been dwelling on the paragraph that begins, “I’m sure you will remember me…” and considering the ways that we leave an impression on those people with whom we grow close. Place also seem to become imbued by the character of those who reside there. How were you shaped by these places, and do you also feel that you shaped them in any way?

AI: I left without saying goodbye. Back then I didn’t know that I would never return. This city taught me many things, gave many memories,raised and nurtured me. For that I am immensely grateful. It’s difficult to know what impact I had on it – I was still too young. But after February I want to believe that in the future, when it’s been liberated, I’ll be able to make an impact on it. I want to visit those familiar places, where I’d lived for so many years. I want to bring me back that part of my history.

But life goes on and I want to remember only the good. It’s been almost 10 years since I last walked those streets, back when they were peaceful and free. You could feel it’s energy, how it lives and breathes. And I truly want to believe that it has not forgotten what it’s like to be alive and free…despite all its good and bad. I want «D» to know that in my memories it will always stay just as wonderful, even after it’s been “ill” for so many years. 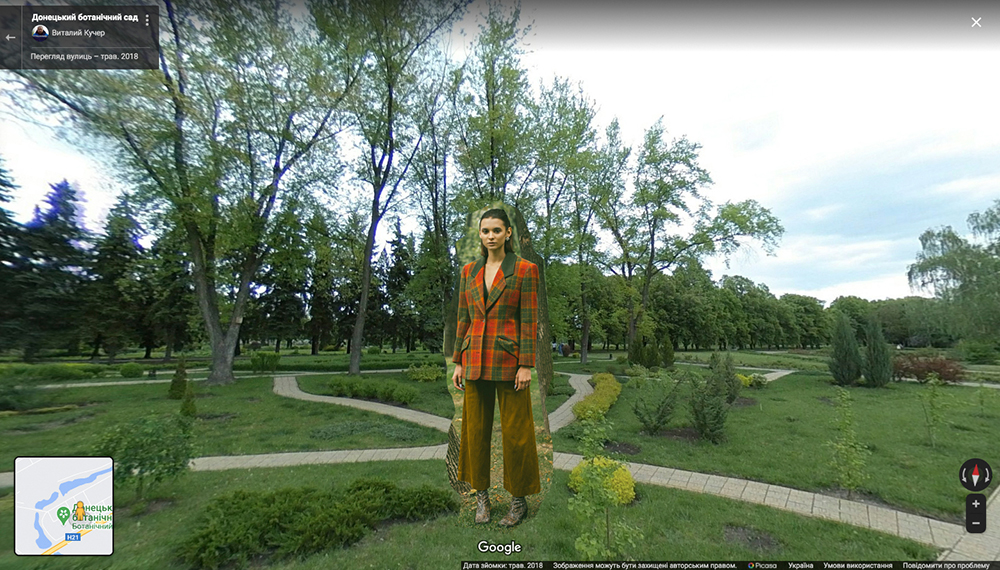 DG: Tell us more about your incorporation of your professional work as a fashion photographer into these google map images.

AI: In the time from my leaving to writing this letter my life changed drastically. 8 years ago, I was getting a medical degree and thought that my life would be dedicated to medicine. But my life tends to take extreme turns. In 2019, after having worked as a doctor for 4 years I got into art. It was a big decision, but I followed my heart. I wanted to share it with «D» because he didn’t know how I lived all those years without it. It remembers me as a medical student, with completely different values and worldview. I made collages of my works with places where I spent most of my time when the city had not yet been occupied by Russia. I wanted to imagine how my shots in my home city would look like. Wanted to share it with “D”, like you would share with a best friend who you grew up with. 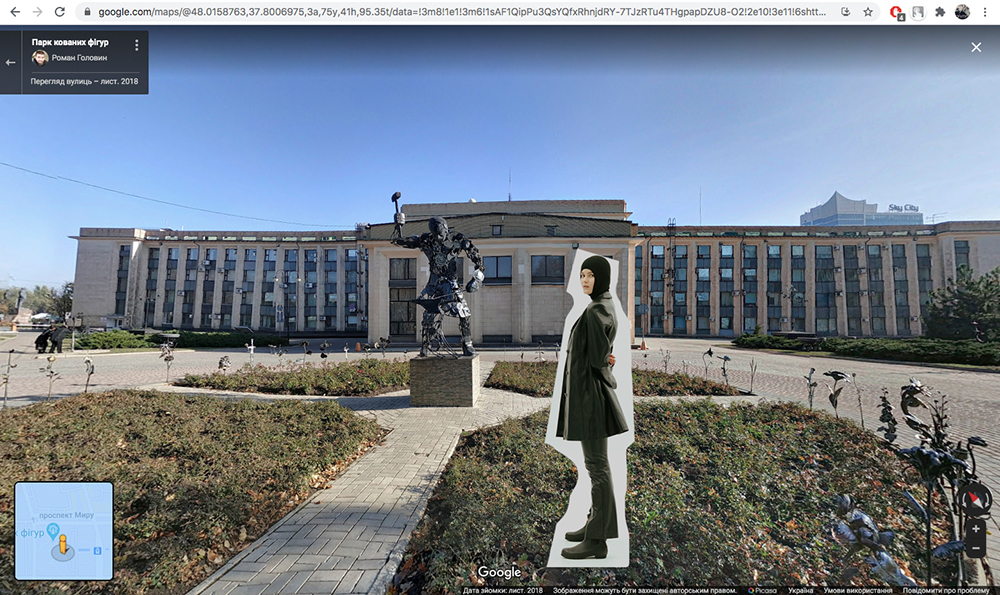 DG: This work is very different from your professional photographic practice. What interests you in social projects, in general?

AI: Social projects are a shout, but in the modern world there is so much noise around, and often individual stories are lost in that noise. I believe that each life is unique, that it is overall a tragedy, but with elements of drama and comedy. I just wanted to share my small tragedy the best way that I can – through art. I wanted to help those who, just like me, lost their homes in 2014. So that by reading my letter they could let go of their pain and their tragic memories. So that they could put a full stop and start a new book. I think this is what social projects are for – to help people realize, let go or change their view. 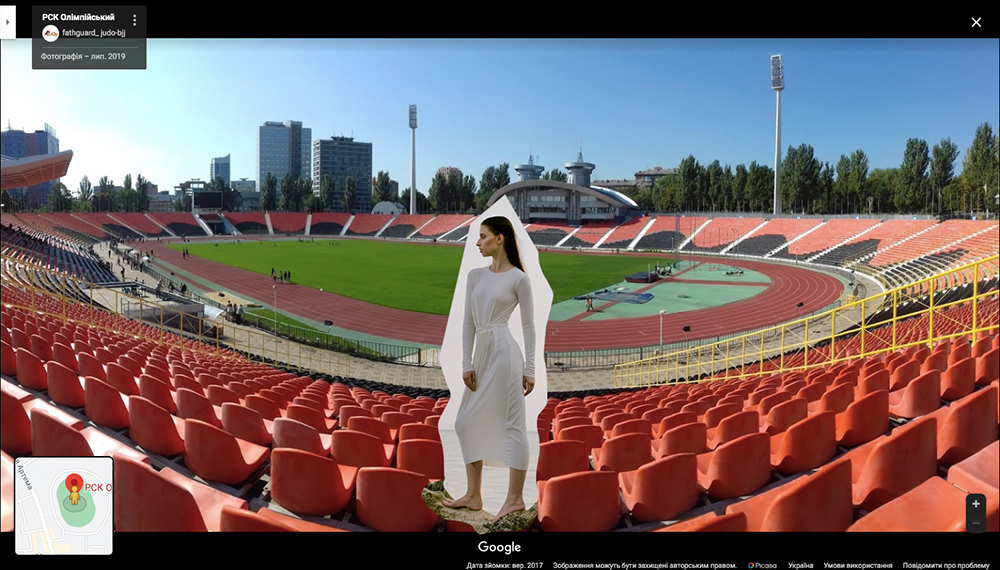 DG: You have that line toward the end of your statement, “I don’t know if we will meet again someday…”. Have you expanded on this letter in your mind? What are your thoughts on this now?

AI: Now that I’m reading this letter – I am afraid. I am pulled back to those days and months where I listened to every noise outside my window and imagined where a bomb would fall, who is walking outside. I am afraid that they would take everything I have left – my memories, those pieces of my life that I’ve had for the last 8 years. In 2014 they took my home, places where I spent my childhood, went to school, where my parents spent their youth, where we had dinners with my big family, where my grandfather still lived. They took my Crimea – where we went every summer. The place where I learned to swim, the place that had the most delicious peaches. The place of which I have millions of most precious memories. In 2022 they took Mariupol – the city where my mom was born, and there I often went in my school years. They destroyed my parent’s home. The second home my family bought after moving from occupied territories in 2014. My parents were left with nothing, again. Kharkiv – the city where I’ve lived for the last 8 years, is now being bombarded every day since the beginning of the war. The streets and buildings that I saw every day are now permanently damaged. I don’t know what will happen to it tomorrow. The border with Russia is only 25km away from my apartment. I don’t know if there will be anything to come back to. They took my history from me. I’m afraid that they will take my country and my family will die. I believe that good defeats evil, but it would make me very happy to see it with my own eyes… And if it happens – I can get back my roots. I’d like to see the places where I was born, where I became me – the person who I am right now. I don’t want to feel like someone from nowhere. 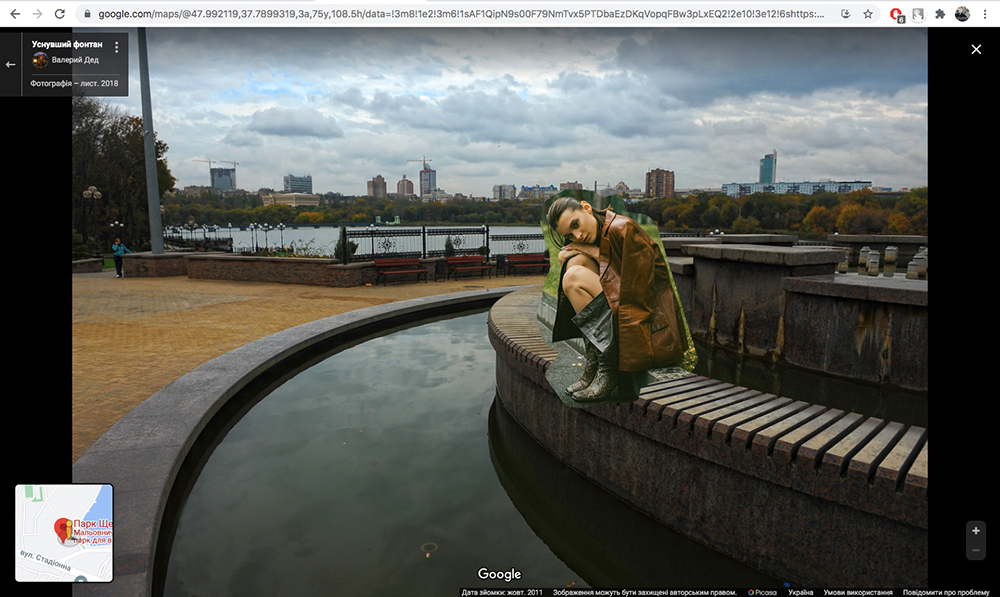 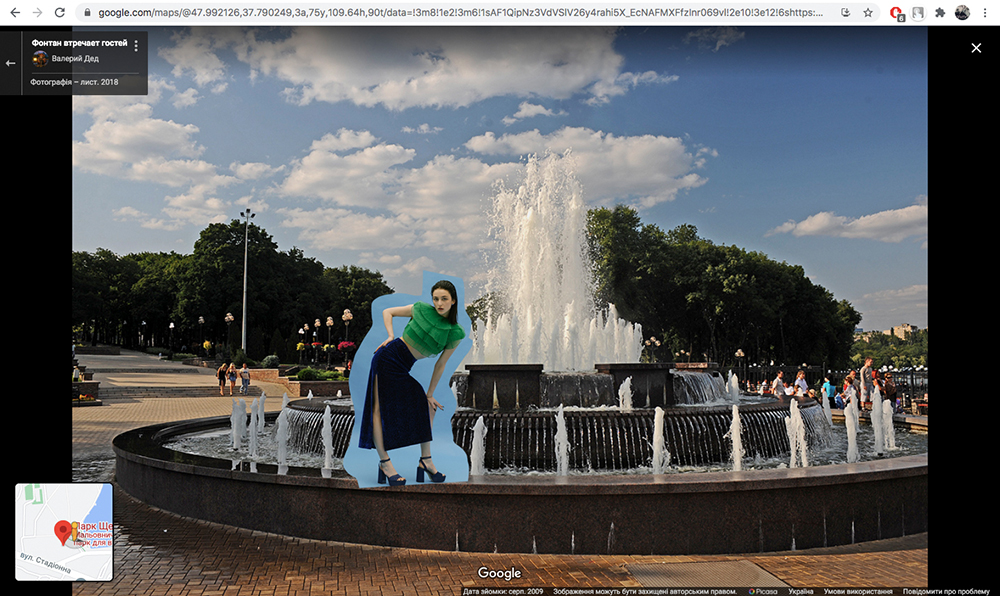