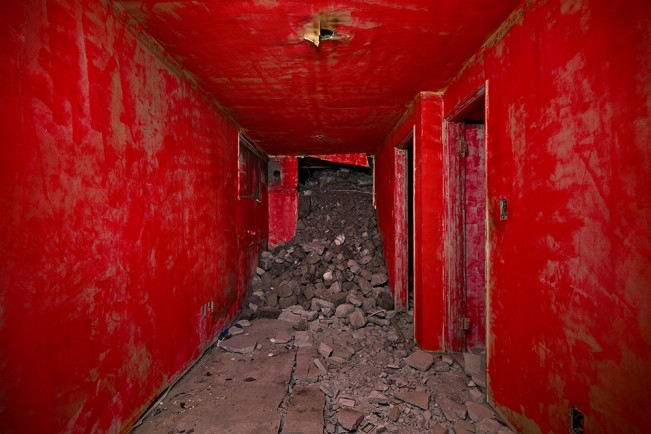 Jihyun Jung was born in Seoul, Korea, and received a B.F.A at the Seoul Institute Of The Arts in photography in 2005, an additional B.F.A at Chung-ang University, Department of photography, Gyeonggi-do , Korea Seoul in 2010, and an M.F.A at Chung-ang University, Department of photography, Seoul, Korea in 2012. He has exhibited widely including solo and group exhibitions through out Korea and Europe, and has received various awards and residencies. Jihyun Jung explores the deconstruction of architecture in his project, Space Between Creation and Destruction. 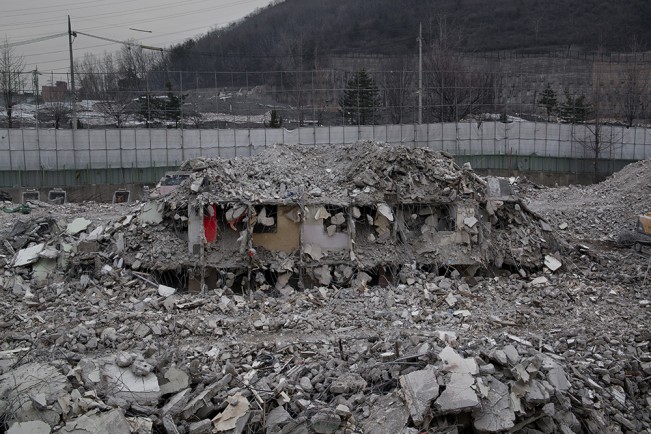 Space between Creation and Destruction

“Topos koinos,” or the shared common space, is in danger of extinction. Cities are only used as indicators of economy or politics, and no longer function as a place of living, which used to be their essence. Blinded by extravagant plans of develop\-ment and a greed for money, people are giving up spaces for their lives, dashing toward the isolating urbanization of func\-tion hidden behind pieces of metal. My work documents the construction and demolition that lie beyond that metal barrier. Expressed in the images are spaces that briefly exist over the course of either creation or destruction, cut off so that we cannot approach, cannot recognize its form. I enter these urbanized and disconnected spaces in an exploration that targets the perspective of looking back at a place we once lived, after the urbanization race for “growth” has come to an end. 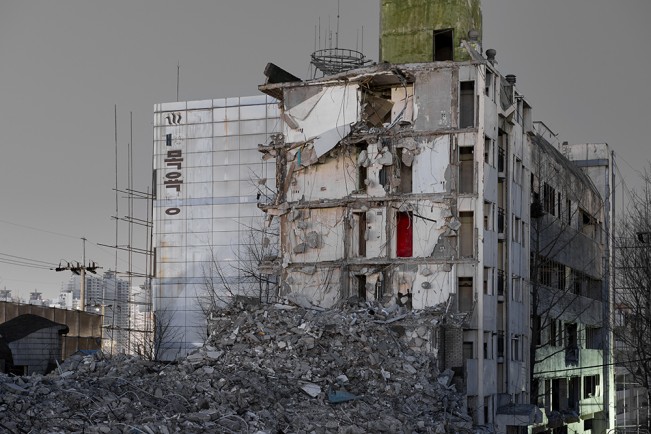 Construction Site: A construction site is where the act of destroying nature collides with the act of creating a place to live. It does not exist until the apartments are completed and a functional space appears amidst high-speed urbanization. From the interiors of the structures, I was able to find a point that conflicts with the di\-chotomy of construction sites. Then, by interfering with the order of the functional matters and discovering their tranquil side, I tried to express this seemingly rational, objective construction site as a personal and emotional space. These images were taken while exploring the construction sites of large apartment complexes that are now complete and fully functioning as homes in Pangyo New City in Bundang, Cheongra New City in Incheon, and Shinnae Development sites in Seoul. 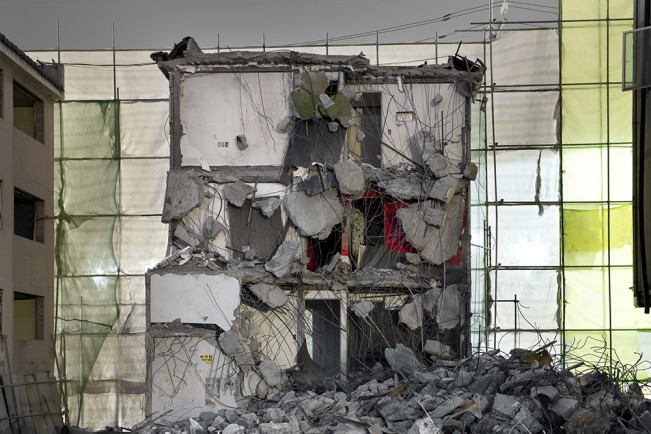 Demolition Site: I sneaked into a building that was scheduled to be torn down, and painted the inner walls red before I photographed them. After the demolition I went in again, looking for traces of that red paint. By documenting the red walls that were broken down into smaller and smaller pieces as the building was de\-stroyed, I chased after the fate of this red room that would, in the end, disappear into the void as an anonymous piece of concrete. The red room was a private space that dissolved when faced with a system of redevelopment. I reveal what kind of space the city we are living in is, and how the city as a place of community is vanishing. It is how I raise questions about the rash thoughtlessness of urbanization. Finding the red room where traces of an individual’s life still reside from within the spectacle of demolition is a work to recover and recognize the city as a place for living. The photographs were taken at the demolition sites of Lu 1 City in Gajeong-dong, Incheon, and Deokcheonmaeul, Anyang. Neither site exists today. 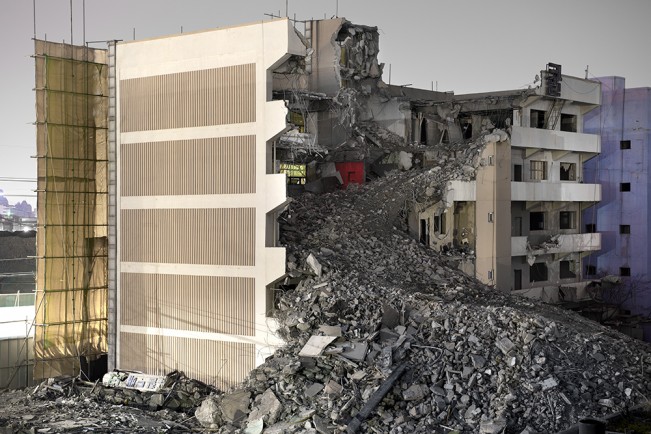 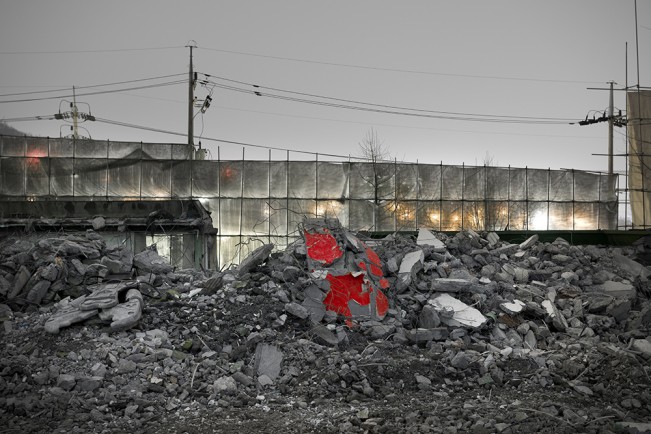 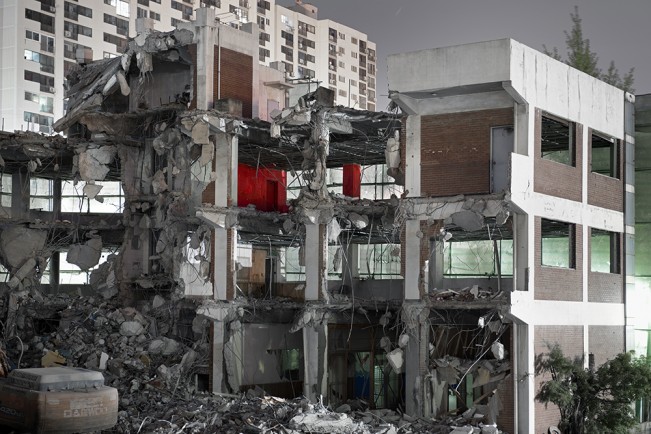 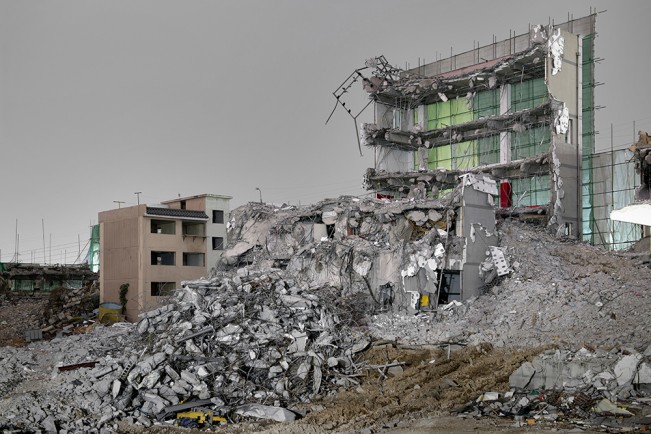 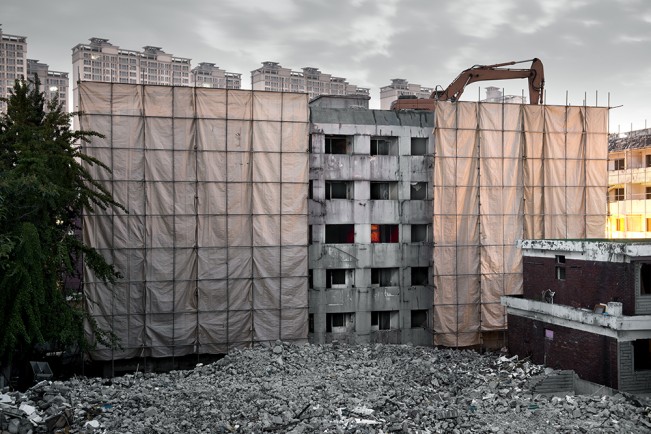 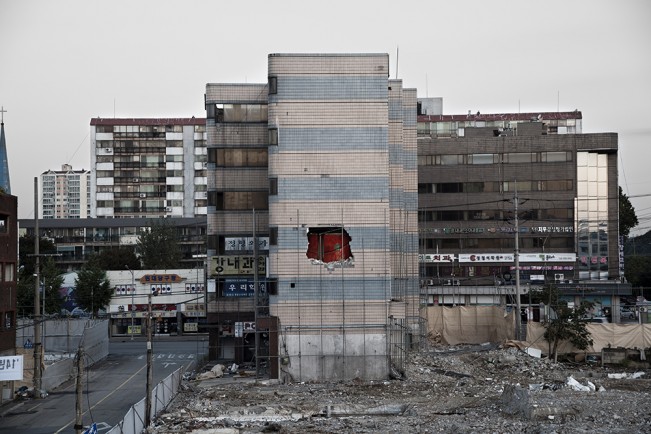 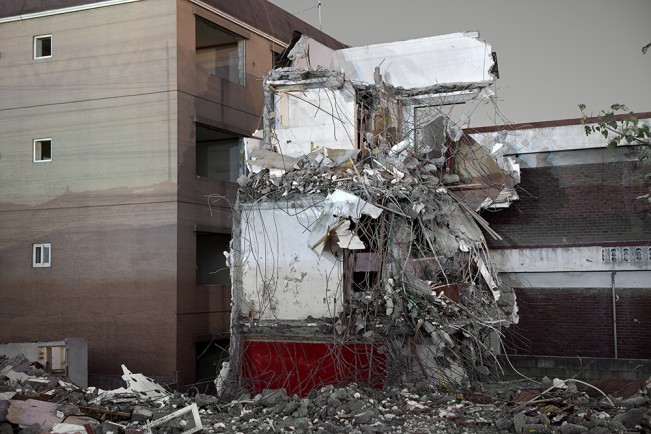 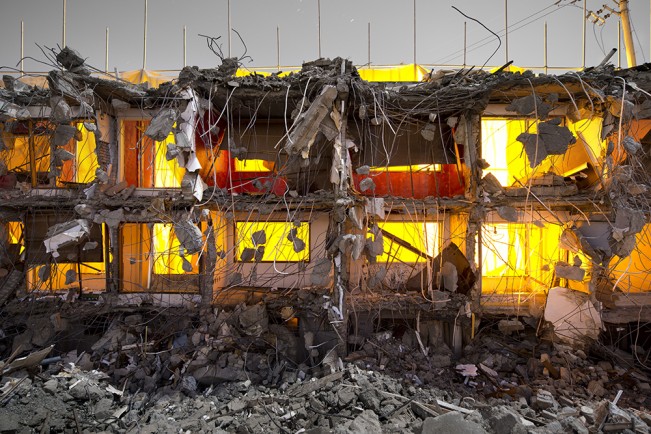 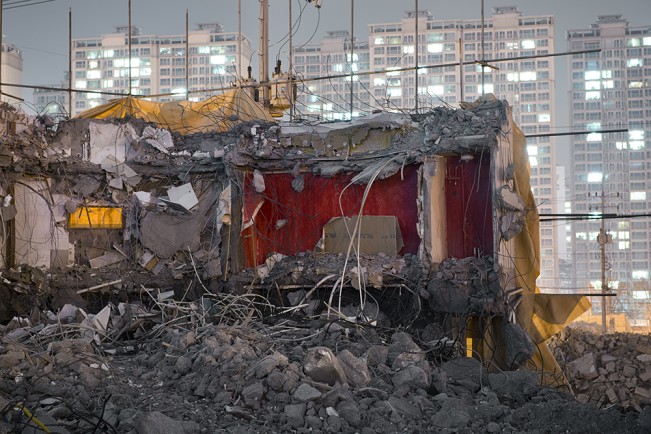 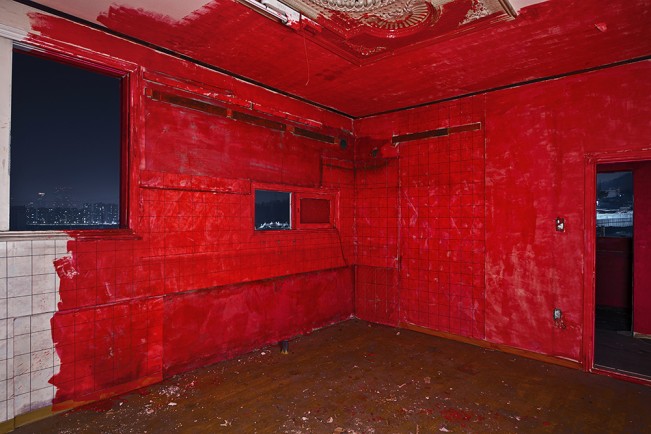 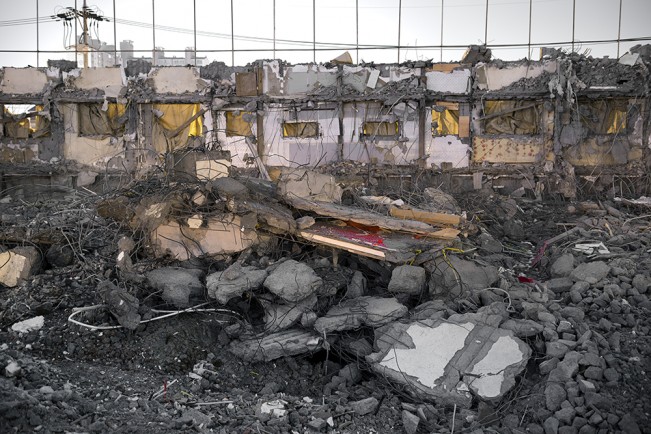 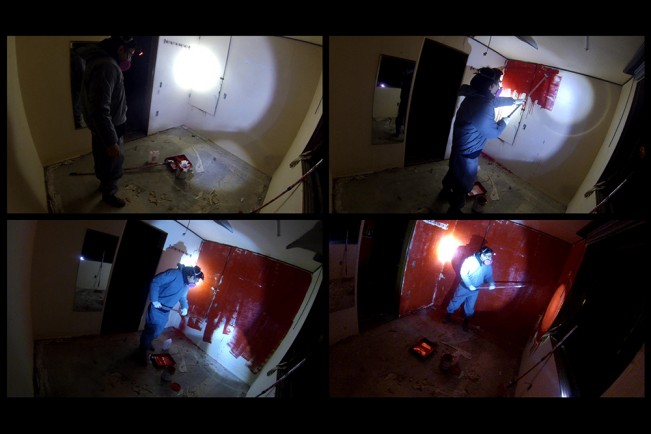 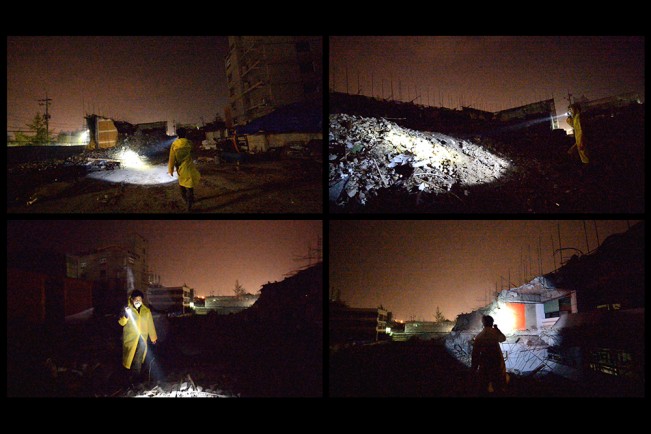 The Stain of the Existence that Remained a Red Dot

In fairy tales, there is a fair amount of content that can be reinterpreted cynically. The children’s tale , that teaches not to scheme but always be diligent, is no exception. The two older brothers, who dismissed their mother’s warning of working hard, built houses using hay and wood. They are eaten by the fox and only the youngest brother, who built the house using bricks, survives. Each brick stacked upon the other represents hard work whereas the hay and wooden houses symbolizes laziness and imperfections. The is actually an environmentally unfriendly tale. However, it’s rare that a children’s tale so adequately fits with modern society’s housing policies. The superficial moral lesson of this tale, the fantasy of the strong brick house, is in tune with the propaganda “away with hay houses, widen the village roads…” of the Saemaul Movement. In fact, roofs of hay roof houses were exchanged for slate roofs in the rural regions and shantytowns were torn down in the city to make room for western style housing. Because of blind belief in the myth of hard work and economic development, concrete apartments stronger than brick houses began to spread like dandelion seeds.

What the children’s tale doesn’t say is that in real life, even the strongest of the concrete houses, more durable than brick, can fall in an instant. Though the strongest of buildings may withstand the fox’s huffing and puffing, it cannot withstand the winds of redevelopment. Hard work refers to economic power and in a society where houses are important investments toward showing one’s economic ability, those who have not made money through housing are deemed lazy by default. In the end, houses that have withstood the years are demolished in an instant under the pretext of development and investment.

From the Saemaul Movement modernizing rural areas, to purifying the city with the 1988 Olympics, and up to building Newtown in 2000, the history of housing redevelopment has been surprisingly relentless, piercing through modern history. Redevelopment is not something that happens to others but it’s become something that happens to us. As a typical kid raised in the Gangnam apartments, artist JUNG Jihyun watched as their family home – a five story apartment building – was torn down to become a thirty floor high rise apartment complex. The artist was only 20 years when it happened and the five story building was only 30 years since its completion. The newly constructed apartment was part of the first Newtown which had a hospital and school built within the complex.

This incident came as quite a shock to him. Ninety per cent of the places that held precious memories were gone. It meant that the playground where he and his friends played, their hideout somewhere between his school and home ceased to exist. From a development perspective, his home became a subdivision of Jamsil district apartment complex package. To the artist that home was like the womb of life. Historian Pierre Nora explained that all things, objects, and sites attached with our experiences and recollections are called ‘sites of memory.’ JUNG Jihyun lost his entire ‘site of memory’, his home with memories of birth and childhood.

However the artist does not raise deep concern over the illusions of redevelopment in our generation and its destruction. The artist simply opens up our delicate senses to seek the difference between housing or home, in other words the difference between an object that’s become a product and the home, the site of memories. As such, it is only natural that our eyes fall to the abandoned complexes scheduled for redevelopment. The artist felt drawn to a sense of nostalgia scaturient from the silent sites long since neglected. Perhaps because of the memories and traces of the past from a place that will soon cease to exist.

The state of the memories that are held in these empty places for redevelopment are quite tattered. The only traces of the past are the indiscernible scribbles on the old wall paper, the black smudged hand prints surrounding the door knobs, and ratty toothbrush abandoned on the floor. The discarded picture frames and toys thrown out with the trash, attest to life’s irregularities. Fungus grows on the flower wall paper plastered once dreaming of a bright future. The ceilings and walls where the wall paper was torn off can no longer hide the faded concrete peaking through shinning coldly like skin. The people who lived here and traces of the space that embraced them are all gone, transient. Throughout the his visit, the artist encountered these scraps of life. The listless faint minuscule traces disappear without a trace in the demolished building in a matter of days. No matter how old the building is and no matter what kind of life once resided there, as dynamites instantly blow up the demolition site, the act itself is fierce and violent. The speed, scale, and sound is in essence spectacular.

It’s interesting that the artist shows an analog approach, a one dimensional simplistic approach to oppose the spectacular violence. As redevelopment began to spread recklessly, photo shoots to capture the sites of redevelopment become trendy. In some, the photos captured traces of a warm emotional existence and in others, it drastically exposed the cold neutral ruin. However, JUNG Jihyun gave up trying to compare the aura of a soon to be demolished building with traces of a humble life. Perhaps because it would have been difficult to successfully show the visual aspects.

Instead he seemingly trespasses in a building he randomly chooses being demolished and paints it red. The red is vivid memory hard to erase, like a signal flare for those in danger of being forgotten, a violation signal against the violence of a demolition site. JUNG Jihyun doesn’t cling at trying to capture fading memories in photographs nor does he try to visualize the spectacular aspects of a redevelopment site. Instead he leaves a strong, provocative, and direct mark on the concrete mass that’s become an object. It’s the artist’s unique performance and asceticism in a city where redevelopment is condoned and abused. His application of red paint reflects an indelicate world, his brush strokes coarse and crude, appearing nervous as if being chased by someone.

It actually requires great effort from the artist to seek out demolition sites late at night. In reality, such work can only occur after all workers have left the site at night. Night is when all motion ceases, when all light is shut out. There is no electricity, water, or anything that works at the site. The space has been frozen as if acknowledging it’s been isolated from life, an object becoming extinct. Therefore, the fact that the artist is going into the demolition sites at night is a form of asceticism where in his own way he is attempting to crack at society that doesn’t embrace memories or traces.

His work in the demolition site is not an easy task. First the artist needs to photograph the interior painted in red and must continuously observe and record how the interior is disappearing from outside the building. Because it is impossible to set a schedule on a construction site the wellbeing of his workspace can only be checked through continuous visits. If the artist was lucky, the space disappeared slowly over several days. However, often the spaces would be blown apart the day after it was painted. In such cases, much like a rescue effort in searching for castaways, the artist had to dig for fragment traces of the red room.

JUNG Jihyun captures the lost traces using overexposure technique with light from street lamps, moon light, and other light sources nearby. In the images, unlike the still red room, the star light in the night sky flows and the trees outside the demolition site shakes its mass. Even the lights from the still prominent residential area shines brightly from afar. In real life, the color red may have no real importance, or perhaps it is something that we couldn’t deny was nothing. It could be a stain. A stain that is about to disappear but which came to us as a stain of existence.