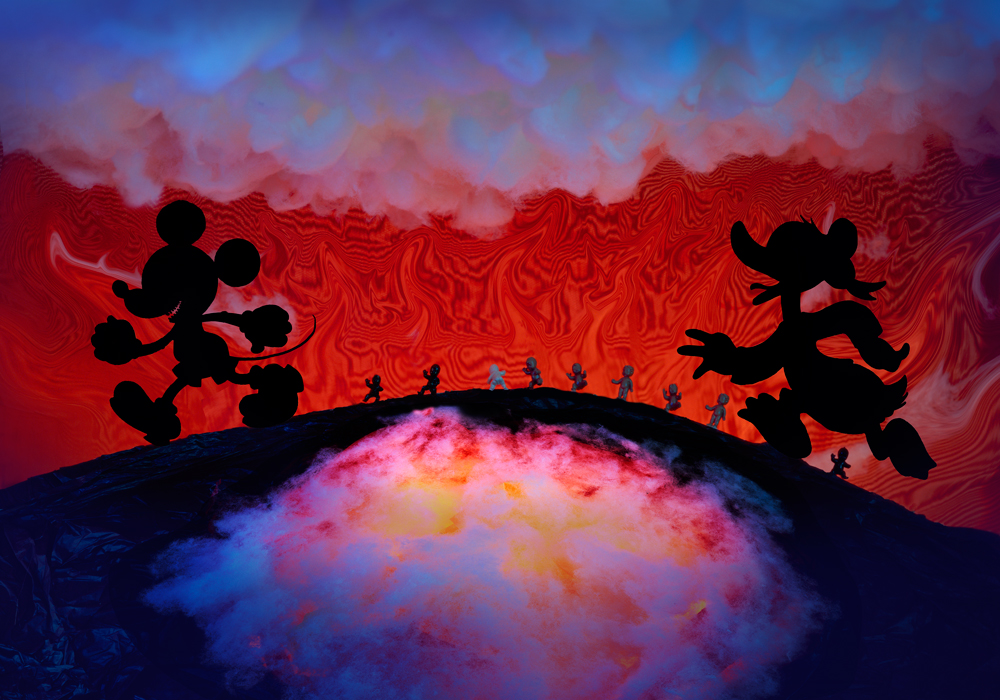 ©Barbara Ciurej and Lindsay Lochman, Guardians of Our Angels. The tortured commercialism of childhood and other “kiddie icons” paper over the economic and emotional deficit at the center of many contemporary American childhoods.

After taking students on a studio visit with Lindsay Lochman and Barbara Ciurej, which was filled with beautiful photographs, talk of early feminist art making, and French press coffee, one of them asked me, “Do you think they’d let me come back and just hang around?” It was indicative of the positive energy that the pair, who’ve worked collaboratively since their days at the Illinois Institute of Technology, put into the Milwaukee and Chicago (Ciurej lives there, Lochman and their studio are in Milwaukee) photo communities. The recent opening of the new photography gallery at the Milwaukee Art Museum featured a terrific set of their pictures from 1990, and they continue to push themselves creatively, as evident in Watch Me Grow.  When that student of mine asked them the same question, they (of course) said yes.

Barbara Ciurej and Lindsay Lochman, from Chicago and Milwaukee respectively, collaborate on photographic projects that address the confluence of history, myth, and popular culture. Their collaboration began while they were students at the Institute of Design, Chicago, and has continued for over three decades.

Ciurej and Lochman have exhibited work in the US and internationally. Their photographs are in collections at the Art Institute of Chicago, Milwaukee Art Museum, Museum of Contemporary Photography, and Walker Art Center. Their artists’ books are in special collections at the Yale Center for British Art, Beinecke Library/Yale University, Golda Meir Library/University of Wisconsin and the Joan Flasch Artists’ Book Collection. 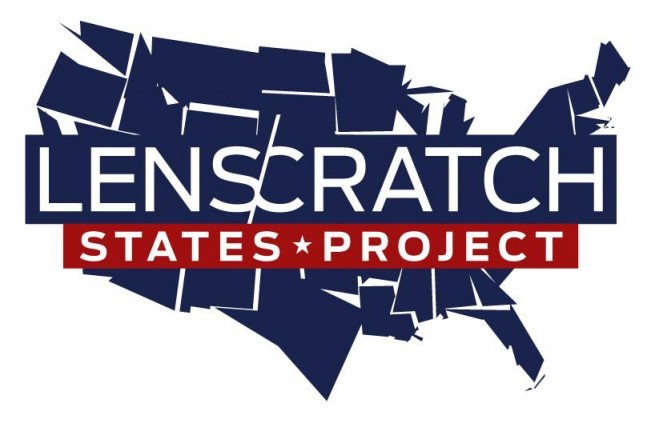 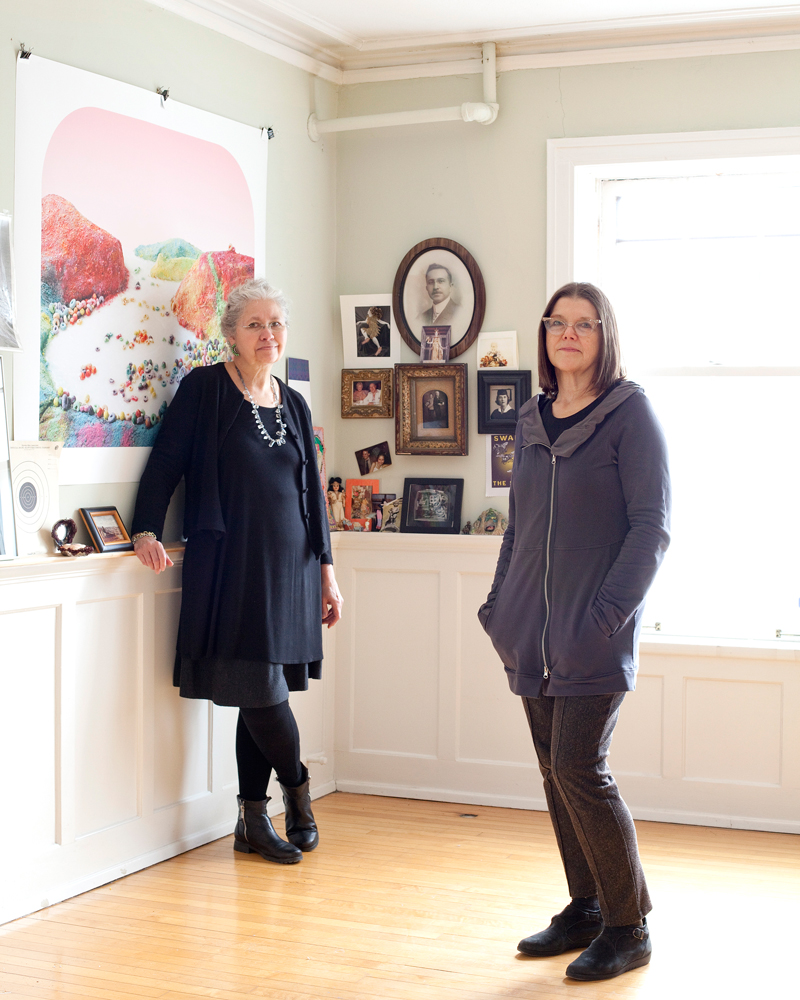 Watch Me Grow is photographic art project. Its theme is how we care for our poorest and most vulnerable children today. It’s about the sales pitches of private day cares versus the reality of parents’ economic depletion and the lack of resources committed to caregiving. The project title and the titles of all the images come from actual inner city daycares.

Since 2009, the collaborative team of Barbara Ciurej and Lindsay Lochman have been documenting the exteriors of childcare centers in Milwaukee, Wisconsin. The colorful hand-painted graphics and advertised messages on these storefronts are an amalgam of information, academic aspiration, incentives, Christian ethos and pop culture iconography.

These images revealed a disturbing subtext. A chasm exists between the aspirational messaging and nurturing names of the childcare centers and the enormous obstacles in the way of affordable care for children.

In response, we constructed and photographed sets illustrating this contradiction, taking inspiration from art historical traditions of 19th century sublime landscape painting and pop culture apocalyptic film. Through the depiction of the power of catastrophic natural forces to overwhelm, we emphasized the extreme vulnerability of children.

Titled with the text found on daycare centers, the photographs call attention to the mismatch of intention and reality.

Lead support for this project is provided by the Economic Hardship Reporting Project. 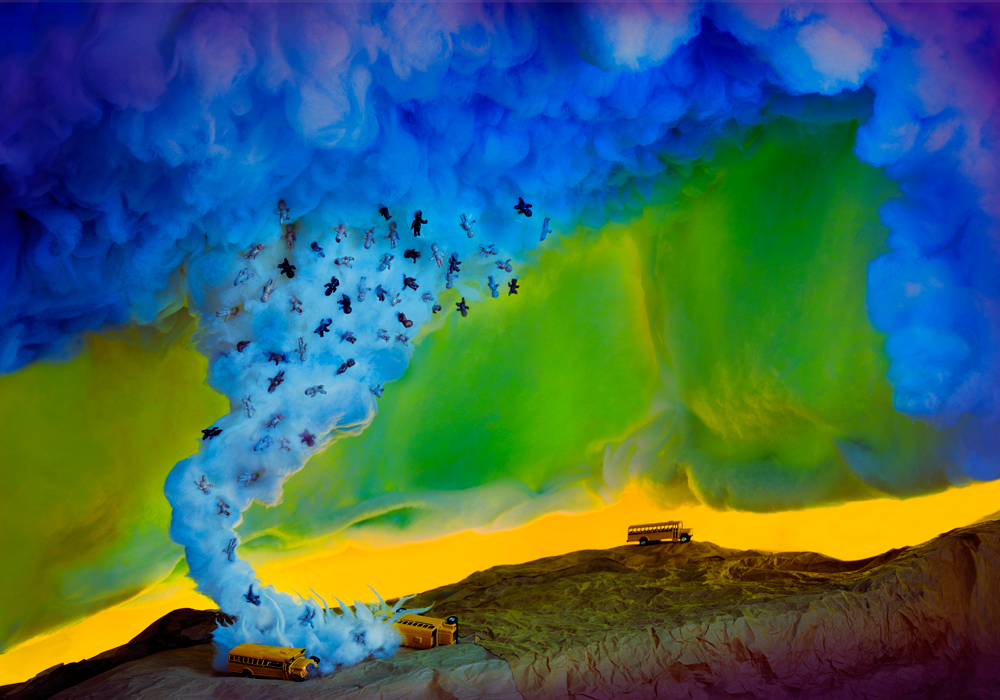 ©Barbara Ciurej and Lindsay Lochman, Children in Heavenly Hands. As the political cyclone sucks up opportunities for working families who cannot afford to pay for child care, the children swirl into the unknown. 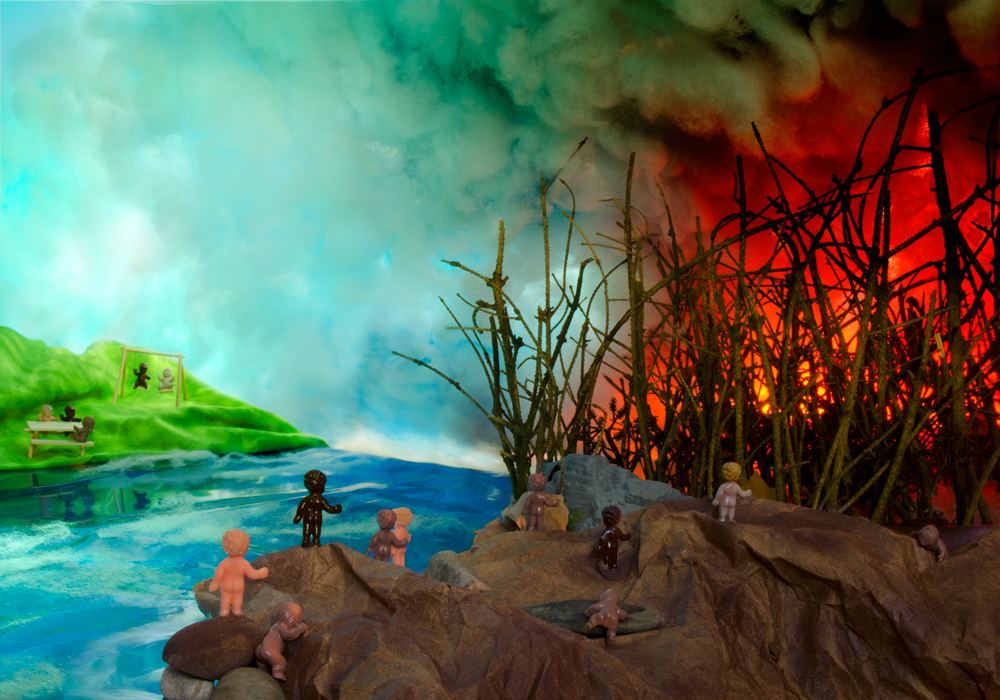 ©Barbara Ciurej and Lindsay Lochman, The Promised Land. The equality gap is a widening, possibly insurmountable, gulf between those who grow up in poverty and those raised with economic security. 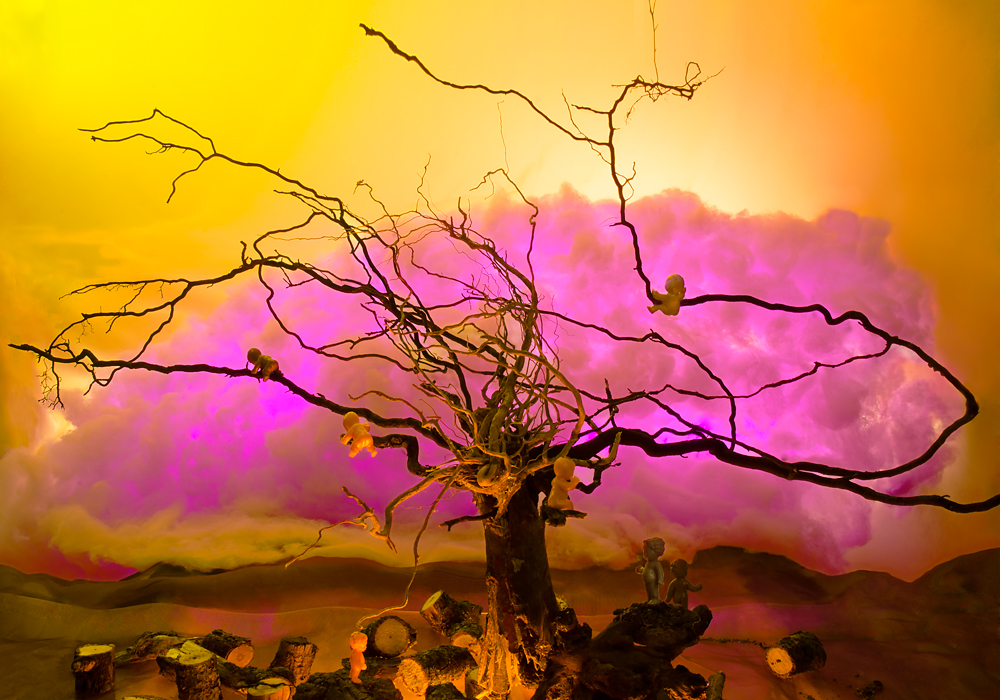 ©Barbara Ciurej and Lindsay Lochman, The Tree of Knowledge. The tree of knowledge is blasted by the apocalyptic blow back from diminished funding for child care and cutbacks in training for providers. The very foundation of providing for young children is being undermined. 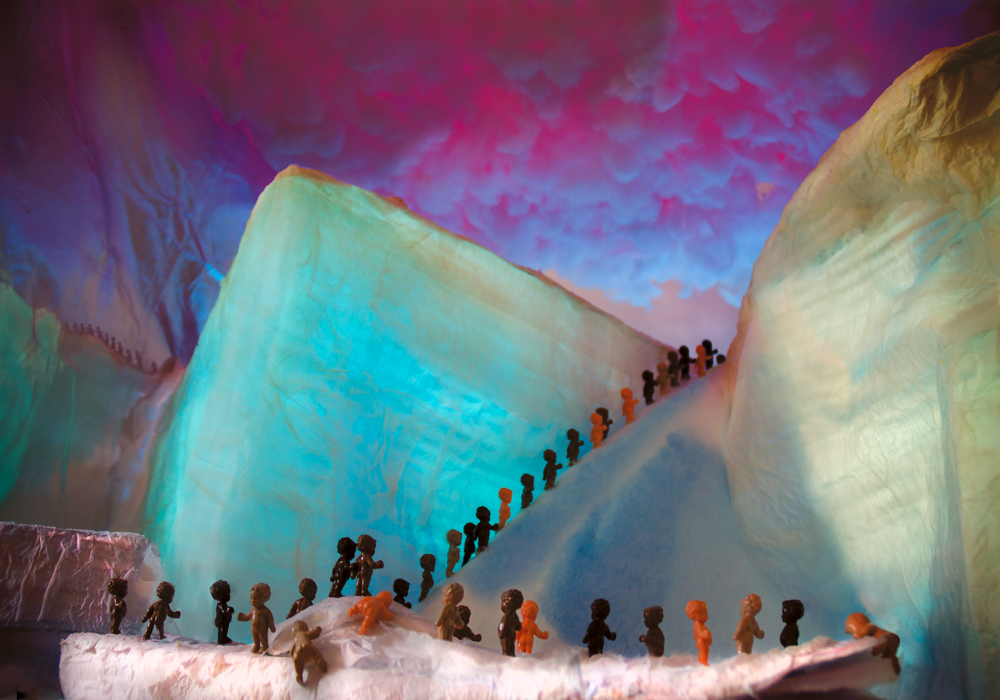 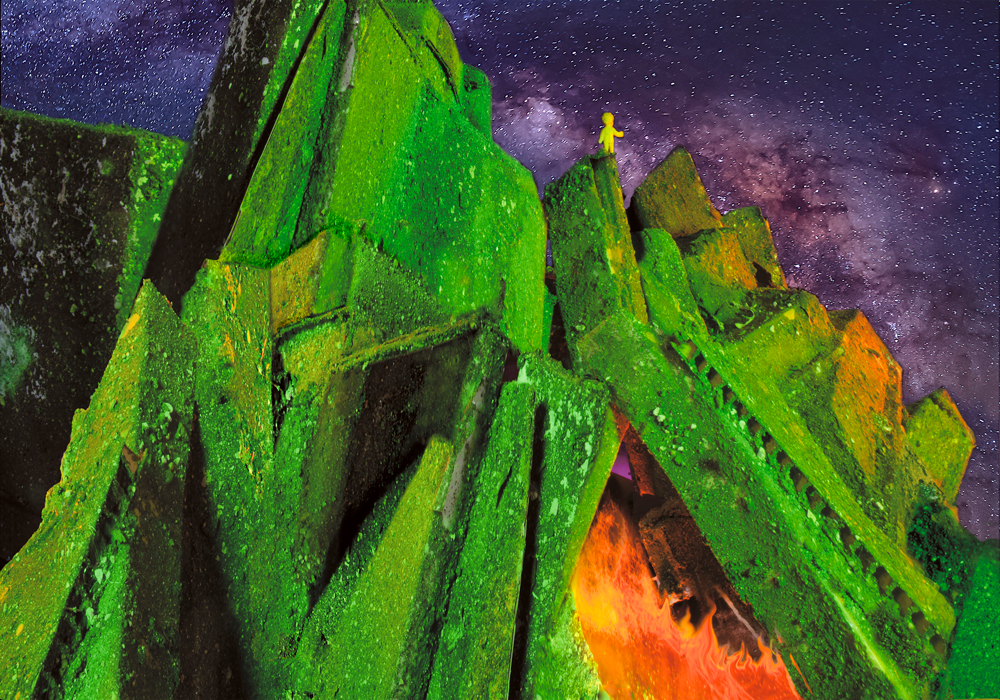 ©Barbara Ciurej and Lindsay Lochman, Living in Destiny. Poverty is socially isolating, leaving few choices and resources. Low income, poor health, inadequate education and family instability are often correlated at the individual and community level. With nowhere to turn, children are stranded between the impossibility of either moving up or turning back for support. 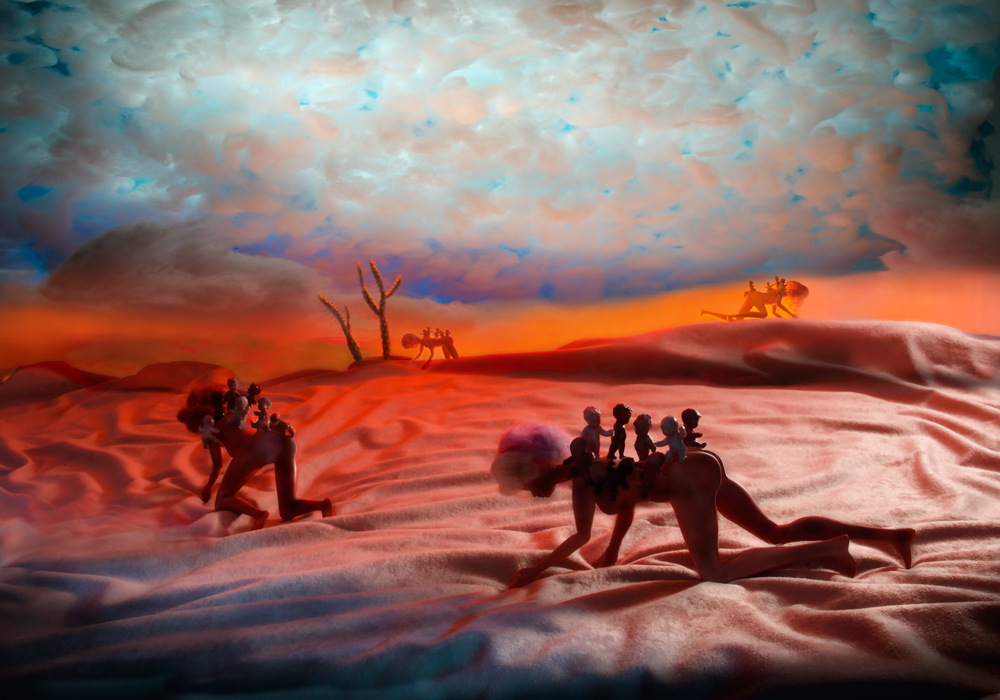 ©Barbara Ciurej and Lindsay Lochman, Sunrise to Sunset. Lack of quality, affordable child care is a barrier to full equality for women in the workplace. The burden of child care is most often on the backs of women, many of whom are single. The task of caring for children is undervalued, where child care workers (mostly women) are often underpaid, poorly trained and over burdened with responsibility. 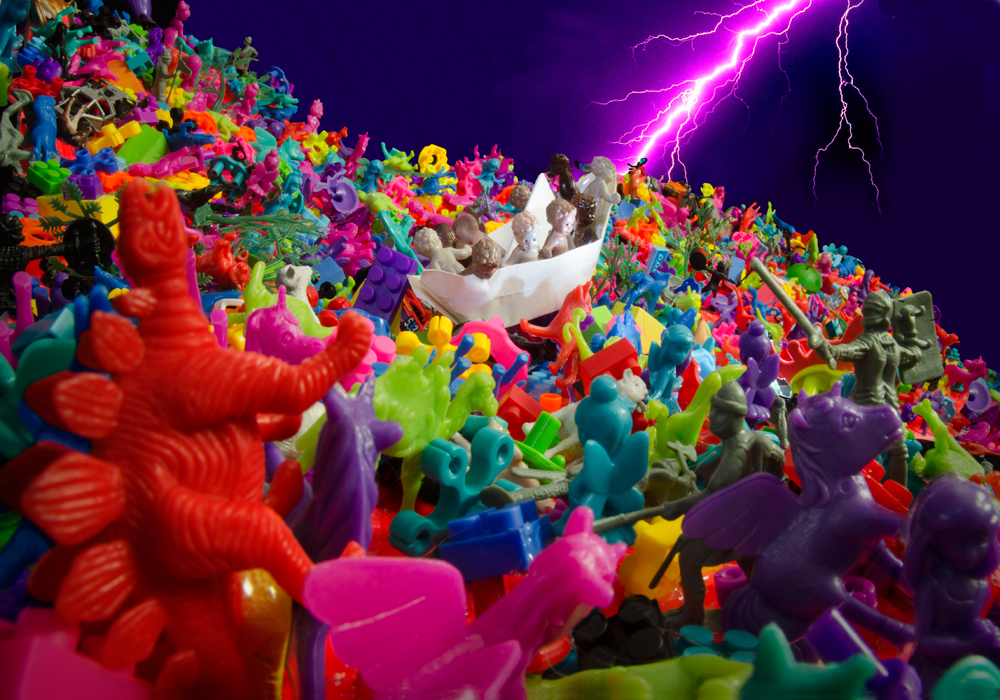 ©Barbara Ciurej and Lindsay Lochman, Little Fish in The Sea. Many services for children in the US are simply a brightly colored illusion, treating kids as if they are disposable. Ill-equipped children must chart a course for their future across a sea of junk. In an overly commodified culture, we should ask what kind of public spaces and values we want to make available to our children.