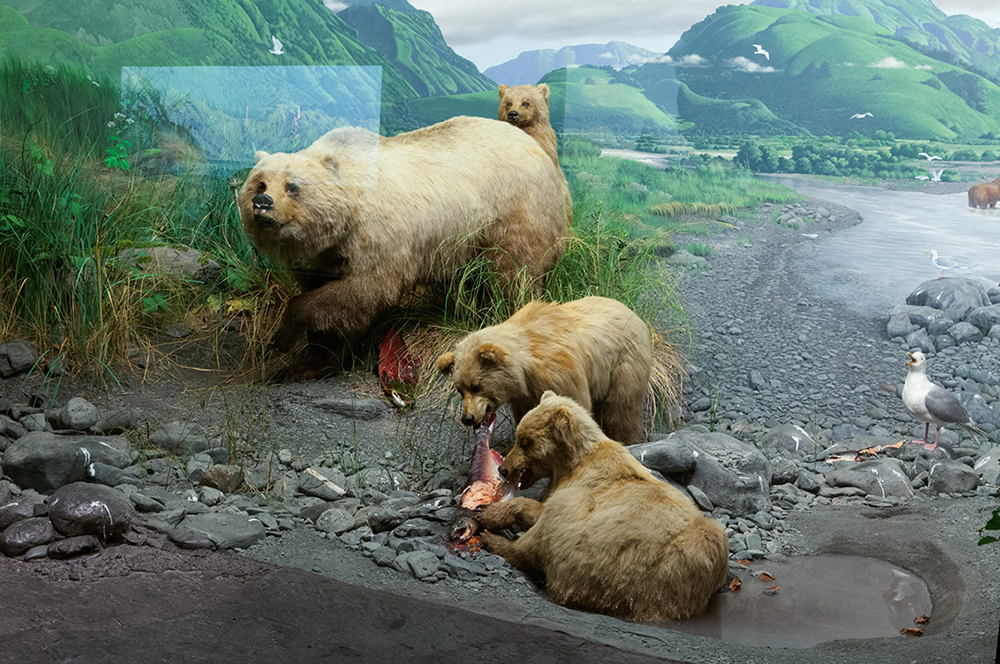 Diane Fox’s UnNatural History is a reflection of culture’s strange obsession to fabricate nature in the comfort of a safe and climate-controlled environment. If you can’t go on an African safari, then you can view stuffed tigers posed in seemingly natural positions within manmade scenes at a natural history museum, albeit behind a pane of glass. Fox’s interest in the ways we objectify nature is clearly on display here in what turns out to be photographs of a very unnatural history.

Fox shoots in museums in the United States and Europe to bring the series to life. The images are oddly fascinating, uncanny: bears feasting on fish beside a makeshift stream with painted pigeon droppings on rocks and an antelope covered in plastic wrapping in an African dream-like landscape setting. A guerilla stands with a blank gaze as reflections of people shine within the frame, and a path between two exotic and encased trees mysteriously points the viewer to the museum’s exit. Each image questions the intended meaning of the dioramas, as Fox takes no issue of making the human presence evident.

The paned glass displays create reflections that Fox uses to add dimensions to the series. The magnificence of nature and the beauty of the animals within the photographs compel me. The dioramas are frozen in time, like pictures, but in three dimensions. The oddity of manufacturing a wilderness habitat within a building and taxidermy animals posed for our viewing pleasure disturbs me. The irony of UnNatural History is that the reflections in the images shift the focus to the viewer; they become a mirror. I find myself asking, “Why do we do this?’’

Diane Fox is a Senior Lecturer in the College of Architecture and Design at the University of Tennessee, Knoxville where she teaches photography and graphic design courses. Solo exhibitions of her work have been exhibited in a variety of spaces including at the Erie Art Museum, Erie, PA; Tower Fine Arts Gallery, SUNY Brockport, Brockport, NY; Greyfriars Art Space in Norfolk, England; Sarratt Gallery, Nashville, TN; Dom Muz Gallery, Torun, Poland; and Santa Reparata Gallery, Florence, Italy. Selected pieces have been exhibited in numerous juried shows including the Los Angeles Center for Digital Photography, Los Angeles, CA; the Camera Club of New York, New York, NY; the Huntsville Museum of Art, Huntsville, AL; and Prix de la Photographie in Paris, France. In June 2017 her work will be a part of the exhibit, “Diorama” at the Palais de Tokyo, Paris, France. Images from UnNatural History are cited in Giovanni Aloi’s book Art and Animals and Taxidermy by Alexis Turner published by Thymes and Hudson. 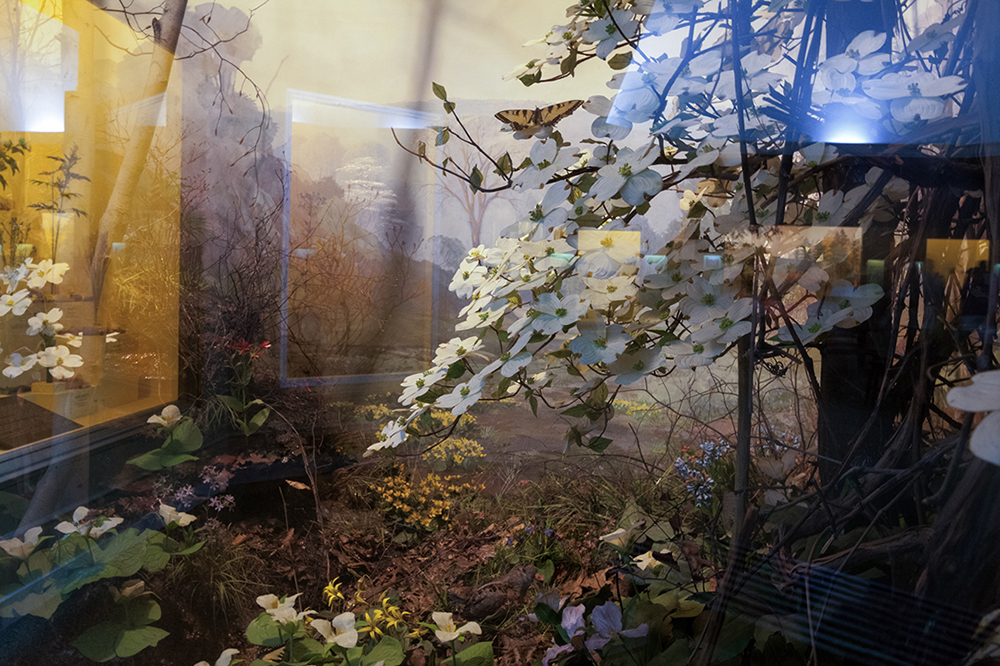 I am interested in the ways we objectify nature, both positively and negatively. The dancing, happy pigs used as icons for BBQ joints and meatpacking plants have always struck me as deeply ironic. Plastic animals take us for rides in theme parks and animated versions sell us products. Nature comes to us, viewed through glass windows at the zoo, natural history museum or framed on television. Likewise, the photograph objectifies the world as seen through the lens of the camera.

We visit natural history museums for a glimpse of our natural world, a world we often do not experience first hand. We view animals from far off places and times at a safe distance. Dioramas (and photographs) create a framed moment of nature frozen in time. The more closely they resemble an actual space and event, the more closely the taxidermied animals appear to breath life, the deeper our sense of wonder and connection. 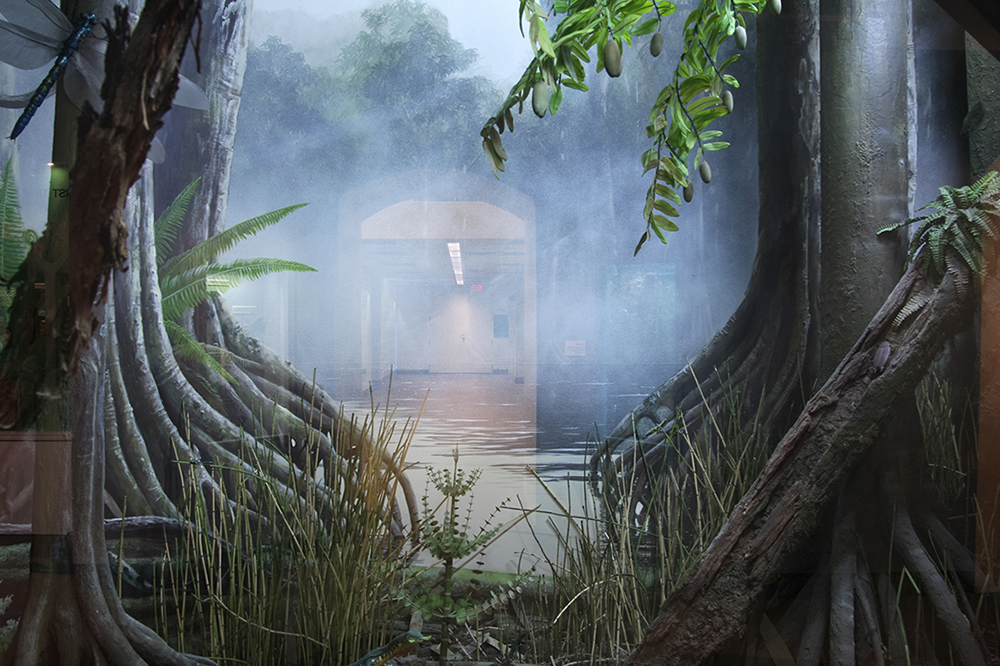 UnNatural History is a collection of photographs shot in natural history museums in the US and abroad. Using reflection and the inclusion of items within the diorama’s case meant to remain unseen, I seek to point to its unreality and the disconnection within the human/animal relationship. It is this dichotomy between the real and the unreal, the version of life portrayed and the actuality of death, the inherent beauty of the animals within their fabricated environment and the understanding of its invention, which finds me both attracted and repelled.

It is this dichotomy between the real and the unreal, the version of life portrayed and the actuality of death, the inherent beauty of the animals within their fabricated environment and the understanding of its invention that finds me both attracted and repelled. 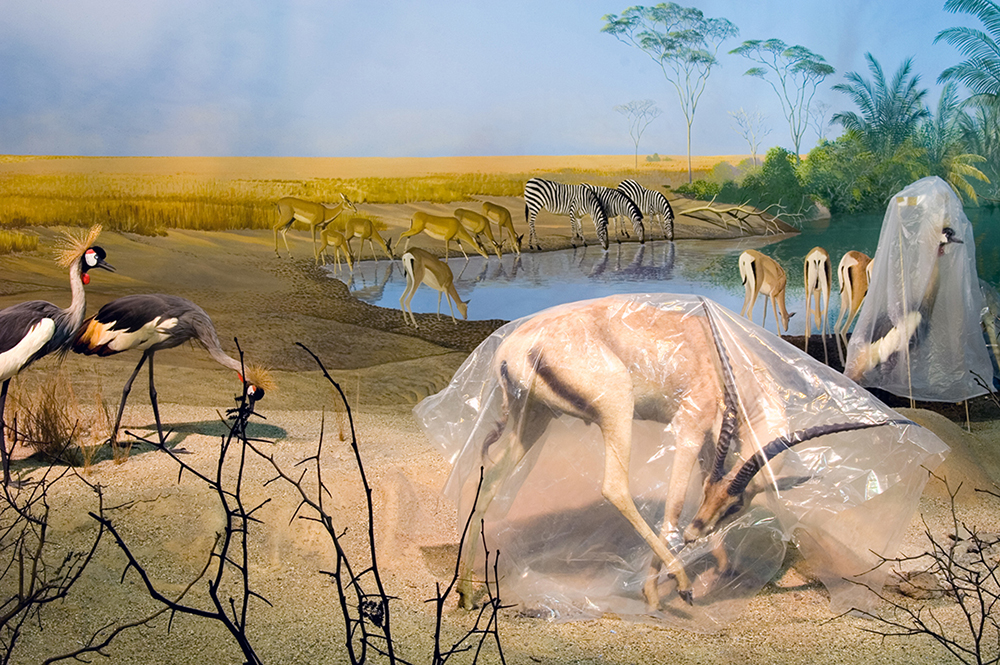 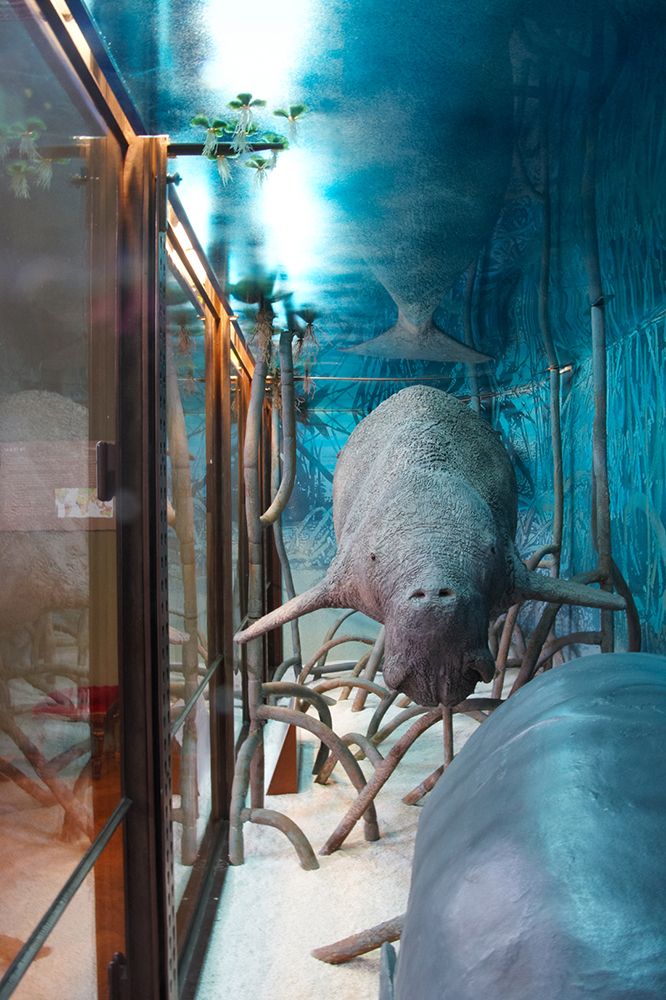 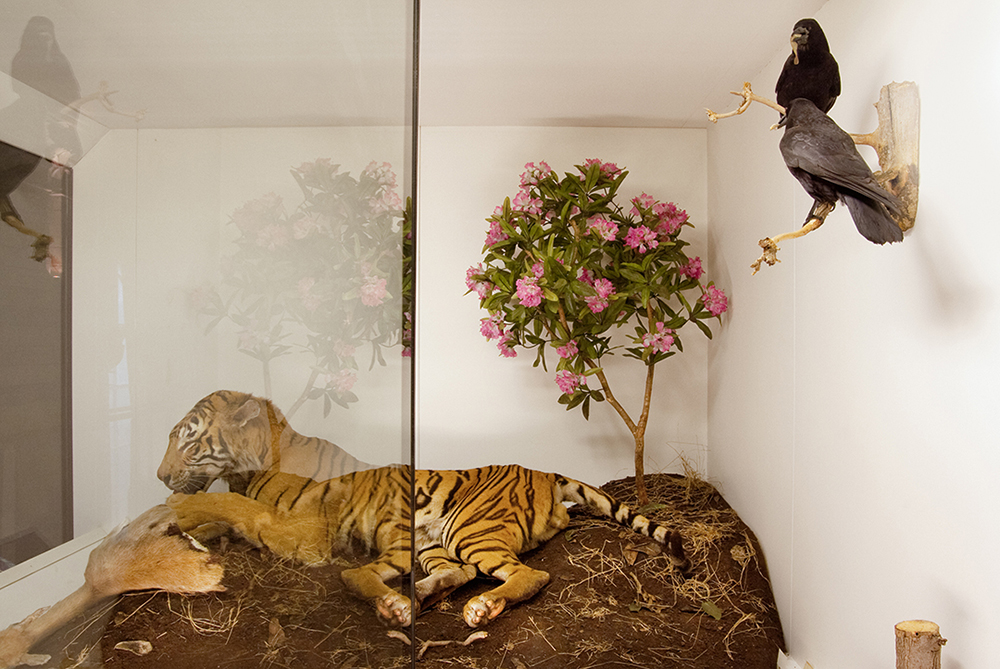 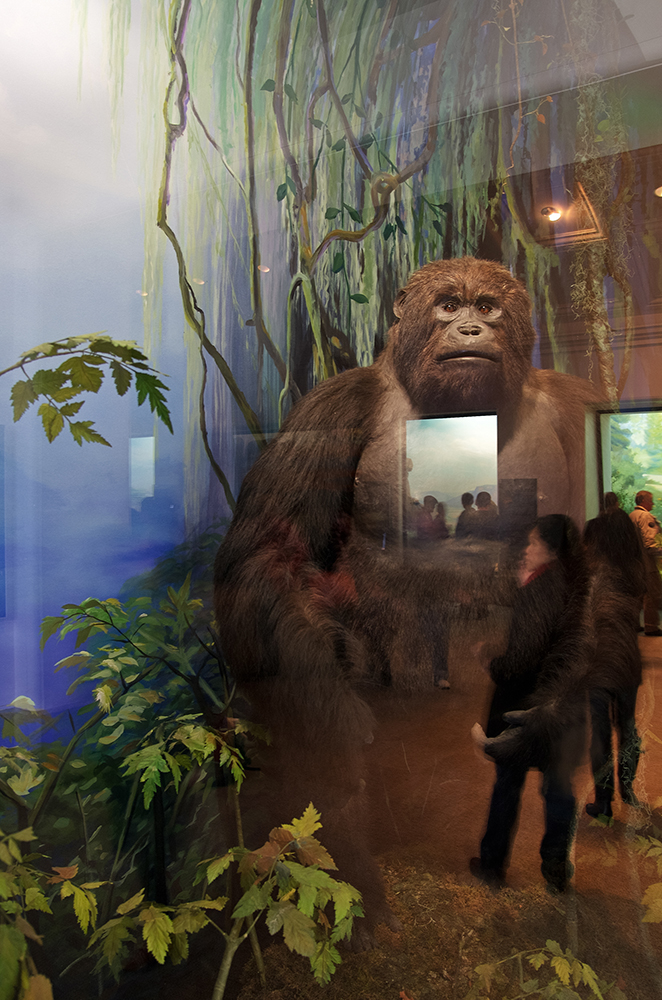 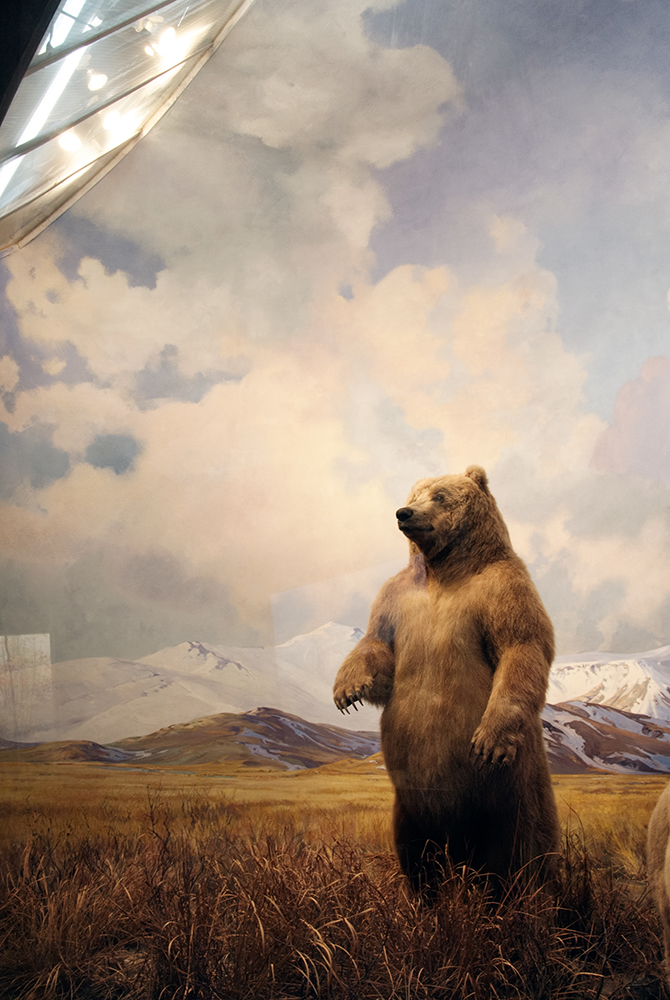 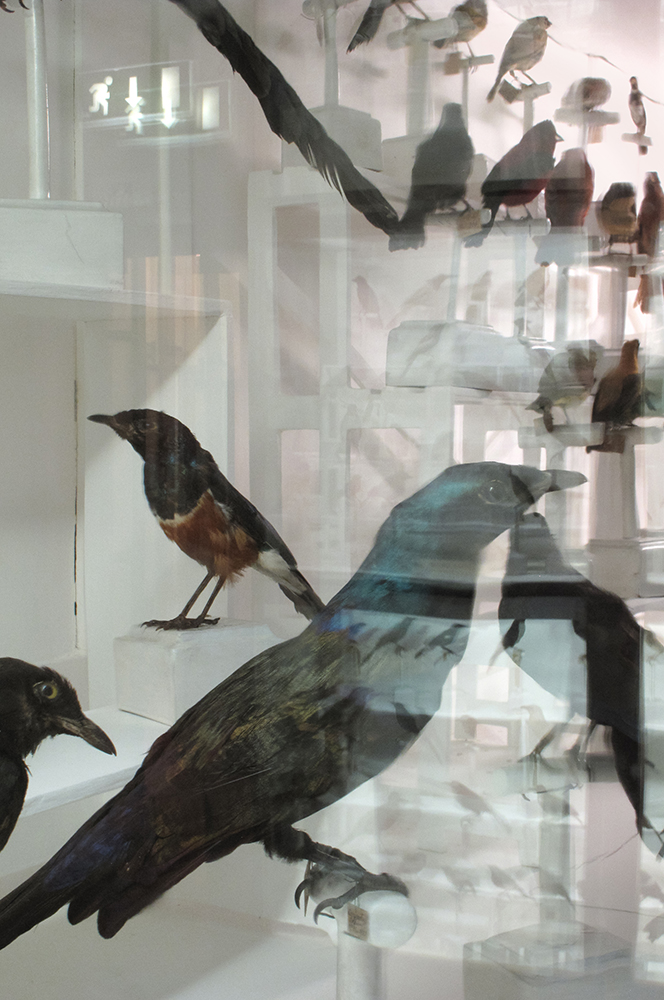 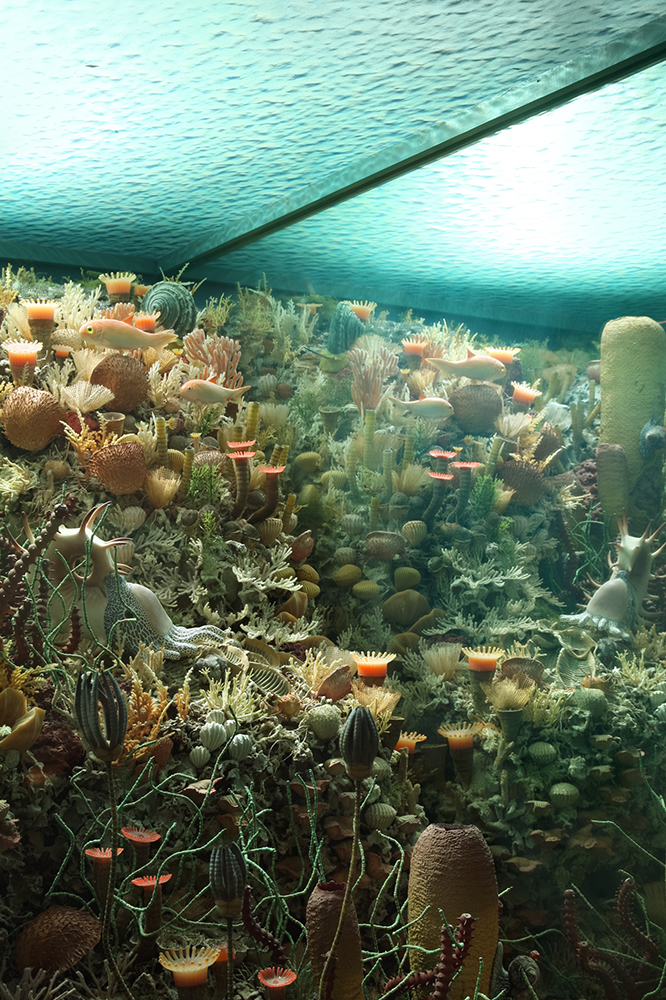 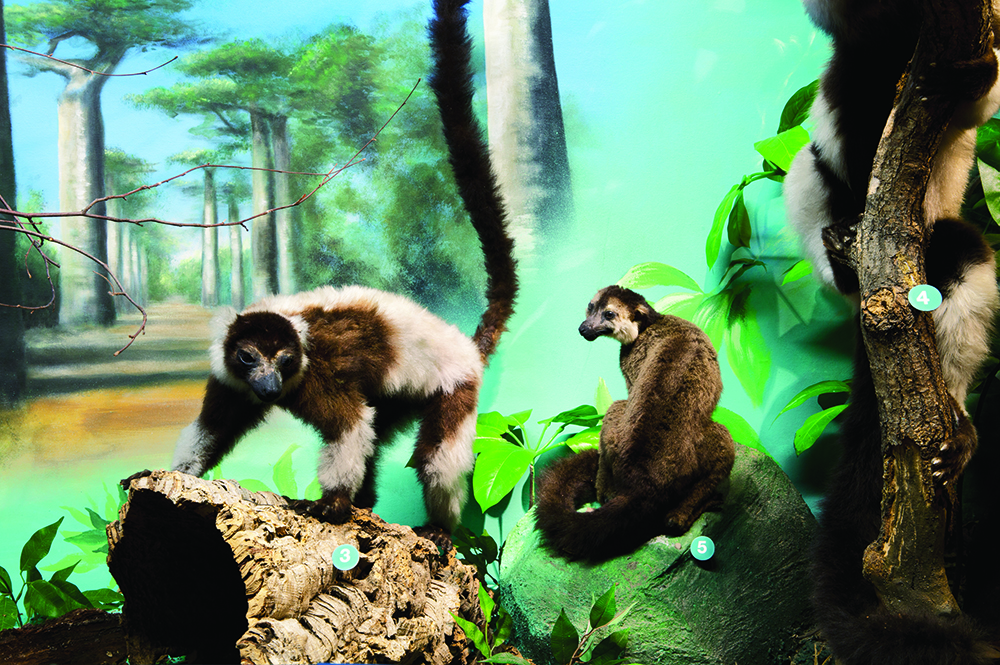 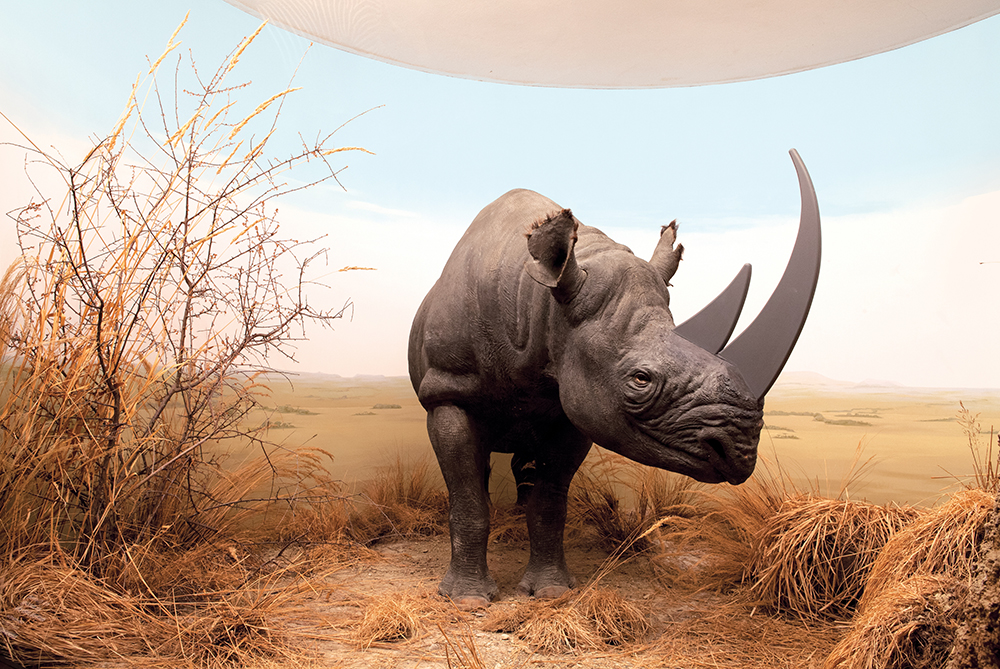 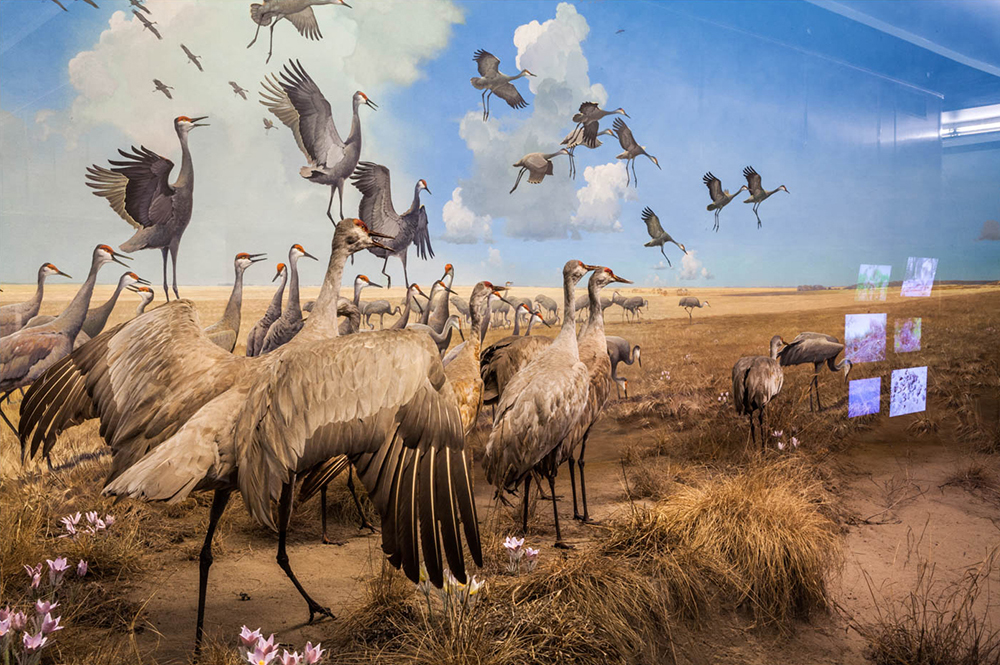 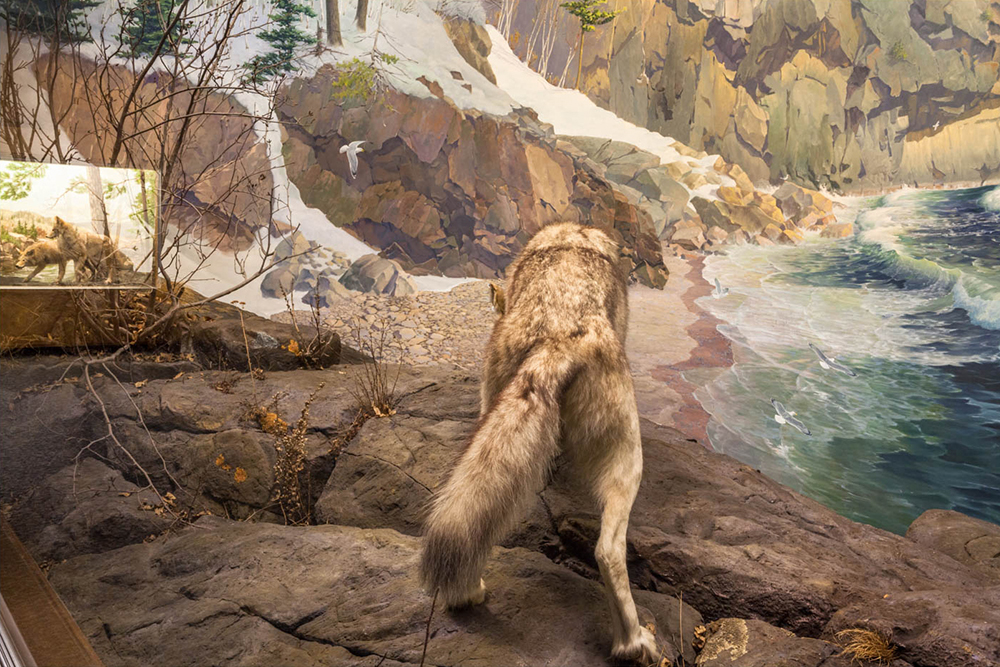