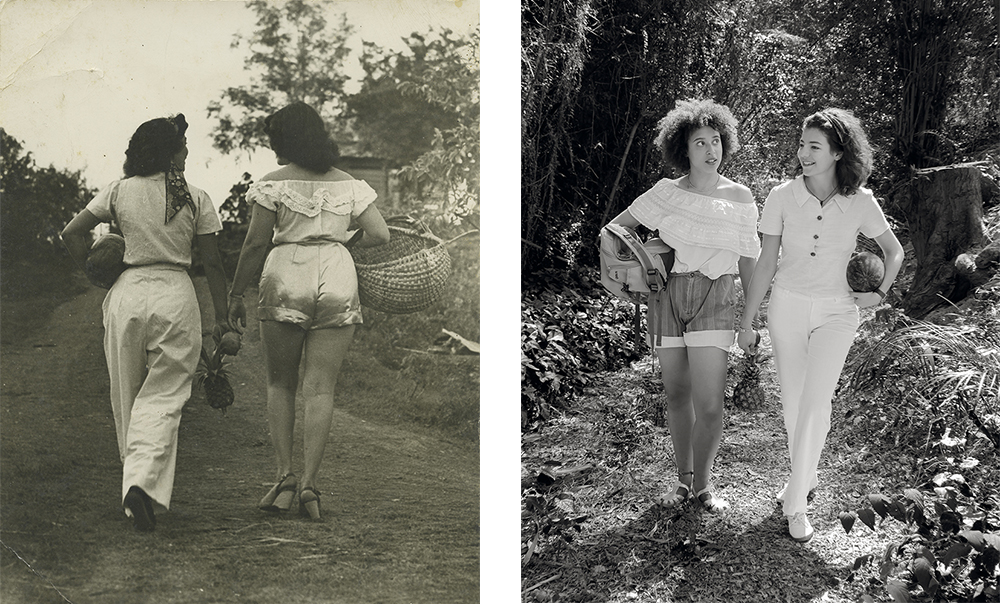 An intriguing aspect of collaboration involves the urge to share stories, not only with each other, but with the past.

While at The International Meeting Place Portfolio Review, an integral part of the FotoFest2018 Biennial, we had the opportunity to view a collaborative project by Elena Valtcheva and Inès Di Folco. The duo create reconstructions inspired by an archive of found newspaper images. Pairing their own performative photographs with the archive images, they draw past and present into conversation. Veltchava and de Falco’s interaction with these unidentified historical images opens a moment where politics, cultures, classes, geographies and timelines dissolve into hopeful and emotional engagement.

Statement by the artists:
Diario de Cuba is a project born in Havana in February 2017. We had the unique opportunity to work with the archives of Diario de Cuba, a daily newspaper from Santiago de Cuba issued before the Revolution. We found mysterious and lonely pictures, and many strange, doctored or damaged photographs. The authors of the selected images, as well as the date and place they were made are unknown. The missing stories behind these photographs became material for interpretation. The story had to be understood or invented, created and lived.

“Diario” means diary, so we started recording our daily life, recreating scenes from the archives. Feeling that the stories behind the images belong to all of us as living human beings, we imagined dialogues between different cultures and generations. There are many layers in one picture – tragic scenarios or fairy tales – and we choose the direction, often looking at our age, and our lives in 2018.

Thanks to the ideas and involvement of our loved ones and strangers we met while shooting, this “diary” became a ritual game and we, as actors and photographers, became a passionate community.

B & L: Describe how your project began and the evolution of this project as a collaboration.

Elena: It began as a discussion in the garden of a theater called Mella in Havana. It was a very clear night both literally and figuratively. We barely knew each other but we shared our most profound aspirations and fears. We talked about death, about family and ancestors and photographs. The desire to make something together was born in these talks. I think dialogue is essential for collaborative work. Some artists write, other meditate in order to clarify ideas and find meaning of life and art, but what is specific to a creative collaboration is that these quests are expressed in verbal communication. Your questions are questioned or eventually answered, your thoughts are confirmed or disapproved and it’s immediate. This interaction shapes new possibilities for understanding and creativity. When our friends became part of the project, it turned to be a very big interchange of energy and ideas. Inés and I acted like directors in order to guide all this performative potential and creative energy. 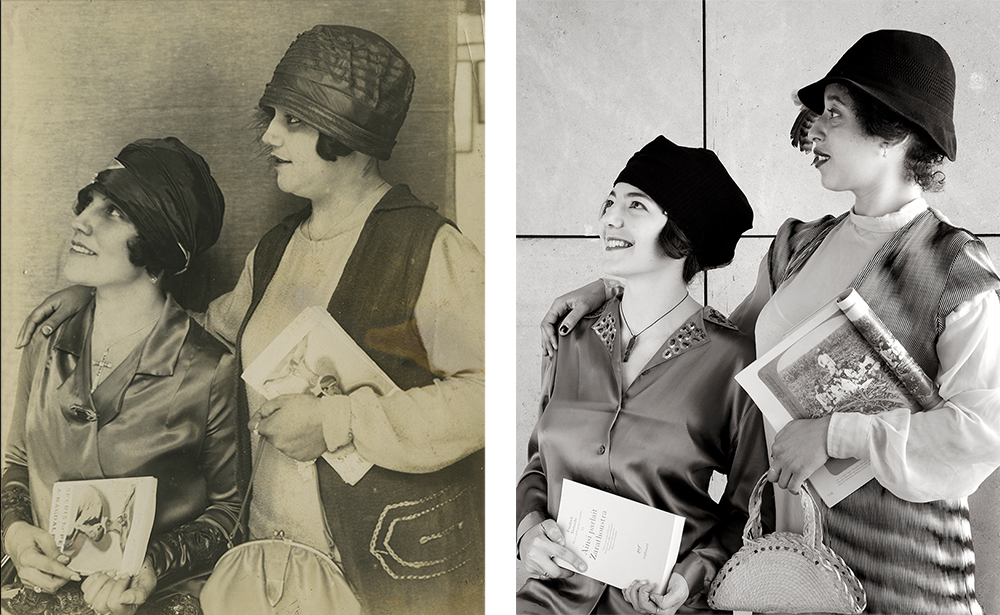 B & L: Can you elaborate on how your opening photograph of the two women walking “spoke to both of you”?

Inès: We started this project with no preconceived ideas; the images were really guiding us. We were looking at all the photographs in the archive, choosing the most appealing ones – the ones with a special aura that would provoke a feeling and a desire for the story. This photograph is one of the first we found. It was like a gift – like seeing ourselves in a mirror. We enjoyed their freedom and the fruits they were holding. We saw those two women walking as a metaphor of our own upcoming research. They’re on the way to somewhere; we were starting our project. It was like a good luck sign, like an invisible railway for the rest of our work.

Elena: At one point I stopped seeing the surroundings, the tropical fruits, the vegetation, and the clothes. What remained was, yes, the two women walking, since always and forever. I thought they could be any women from anywhere and anytime, so I can do that, too.

B & L: How do you continue to collaborate? Given that you are from different countries, with backgrounds in different disciplines, what do each of you bring to the project?

Inès: We see each other often and the pictures are always present. We recently created an exhibition and it was very interesting to collaborate in an exhibition context. In Cuba, we had the chance to scan over 400 pictures, and now we have a bank of images that we can use as a material to express many different feelings and to tell stories. As a painter I was already using photography as a base to represent people from my family and understand from where and whom I came. I was raised in Paris, with the idea that the past is always present, like a person saying hi. Most of the streets are marked, like a treasure hunt, here the house of a poet, there, the favorite café table of a writer and so on.

Elena: Inès tells the stories of people and spirits from Paris, Tunis, Naples and my stories are from Bulgaria. We also share the tales of our Cuban friends. Those countries had different political and social realities but we always find many connections and similarities. It reminds us that when it comes to essential things in life we don’t differ so much. Differences are as inspiring as similarities for us. But in order to fully appreciate them, one should be able to distinguish them. And this is what we try to do with the archives images too. Sometimes we celebrate political or social changes or try to see them with a sense of humor; sometimes we cherish what is still the same.

B & L: Can you discuss how the public, political and historical aspects of the archival photographs reside and resonate with the more intimate personal dimension we see in your collaborative images?

Inès: This is what we enjoy most when we look at our pictures! The different levels, the possible interpretations of the images. First, there is a natural attraction to archives, a fascination we like to play with, by getting totally into the image. The photograph becomes an enigma or a country we visit, detail by detail. We know and live with those photographs as though they were family archives. Most of the people present are dead and they belong to a time that is more than past: the years before the Cuban revolution. It’s like a double death, a double impossibility to be in the present. And still we feel that something remains possible in terms of transmission, empathy. Life carries on and we respond to it.

We adapt our lifestyle to the images; it leads us to do unexpected things. We also perform while posing for the camera. We know that the Cuban revolution changed the system and the habits of this society forever. It’s political because we make changes in the image. It’s like seeing the archive as a question we can answer in our contemporary response to the picture. We add more diversity, humour, jokes – we hide little details in each picture.

B & L: Does inhabiting these poses differ from self-portraiture? How so?

Elena: Yes, inhabiting these poses is often a matter of performance. We completely lost the illusion of representing ourselves in this work. I think photography also has limits and it can’t express the complexity of a human being. The starting point is inspired by our lives and stories and their relation to the archive image. Then we try to look at the surface of the archive picture, detect and understand every gesture and detail. I don’t think that this knowledge gives us a lot of information about the identity of the portrayed persons, but certainly about the reality of this surface. It’s like the photograph acquires a proper life independent of the reality of the situation it represents. And this is what we are performing: surfaces. But surfaces that represent people who lived.

B & L: Do you want the viewer to respond to the archive images by creating their own narrative? Then to be in conversation with your own re-creation?

Inès: We always try to maintain a space for the imagination of an “other eye”. It’s a channel we want to remain open, to not lock the image. The ideal viewer is playing with us. We will never know the exact context of those archives, and that’s not a problem. We want to transmit the same freedom we had while inventing our own stories.

Elena: We will certainly never know the exact context, but we can find the texts. Some of the photographs we selected were probably published in the newspaper. We will find the archives of the published journals in Santiago de Cuba. We want to encounter what we imagined with what was written there. There are many fascinating possibilities around the context, too. 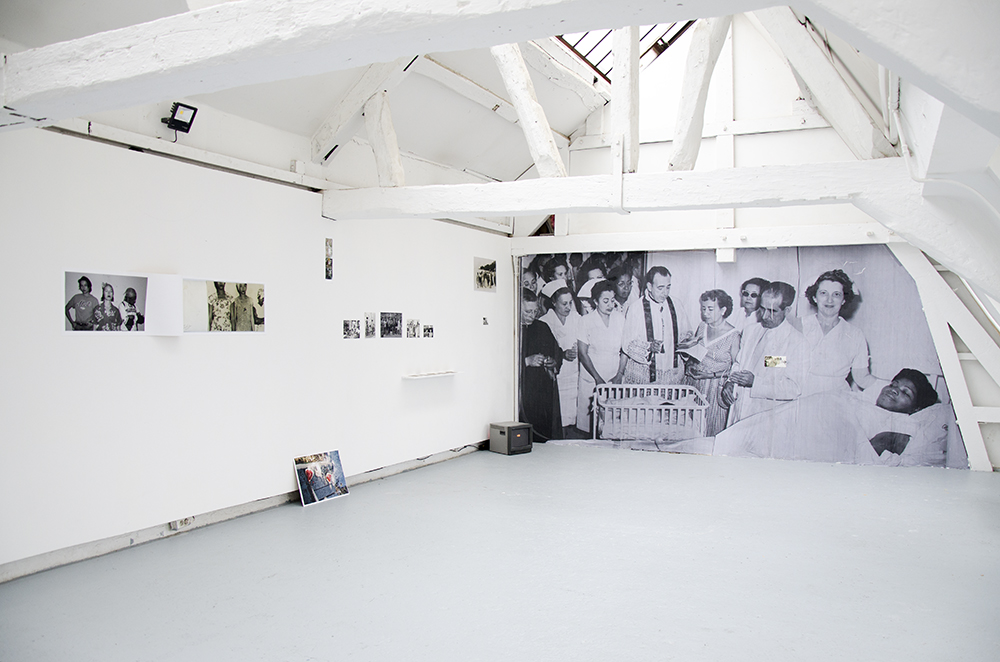 B & L: Will you continue with this collaboration? Do you see any changes coming in form, content or context?

Inès: The future pictures are like our future life. We make pictures while living, as a living diary. We are now very interested in making books. Books are the best way to restore a corpus of images, like a portative little universe. It’s also a way to group series of images we need to see together. We can create interactions between images – the eyes and hands of the people, like new intentions, new relationships.

Elena: We are writing a script for a film of still images; a hilarious story of an air crash, nurses, recovery center, prison, also drawing from the archives of Diario de Cuba. We love to create a new opportunity for those images, to recontextualize them. We made a book, Bonjour du Diable, an arrangement of mischievous faces, tricky looks, evil eyes and symbols. It’s an invitation to consider our innate empathy for evil thoughts and behaviors in our everyday life.

Biographies
Elena Valtcheva, born in Sofia, Bulgaria, completed her master’s degree in Fine Arts at the University Panthéon Sorbonne in Paris in 2016. The research for her master’s thesis  on the fascination of humanity for its photographic representation, led her to Havana where she completed a one-year internship in the Fototeca de Cuba, the national photography institution. Meeting Inès Di Folco in Havana, they started a collaboration work, exploring the archives of the institution and creating projects together.

Inès Di Folco, born in Paris, France, is finishing her master’s degree in Fine Arts at Ecole Nationale Supérieure des Beaux-Arts of Paris in 2018. She is a visual artist and musician. She studied classical music as a harpist, drawing, etching, history of art and analogic photography in Fine Arts. She paints using oil colors and photo collages. Her master’s thesis is a poetic research on the representation of the female character and introspection in the history of cinema and painting. In 2016 she was an exchange student in Havana, at the Instituto Superior de Arte, and started working with Elena Valtcheva.

On Collaboration editors, Barbara Ciurej & Lindsay Lochman are Chicago and Milwaukee based photographers who have collaborated on photographic narratives for over three decades. They are inspired to plumb the depths of collaboration for Lenscratch.

NEXT | Greg Miller: Unto Dust >
< Steven D. Foster: The Space Between | PREV