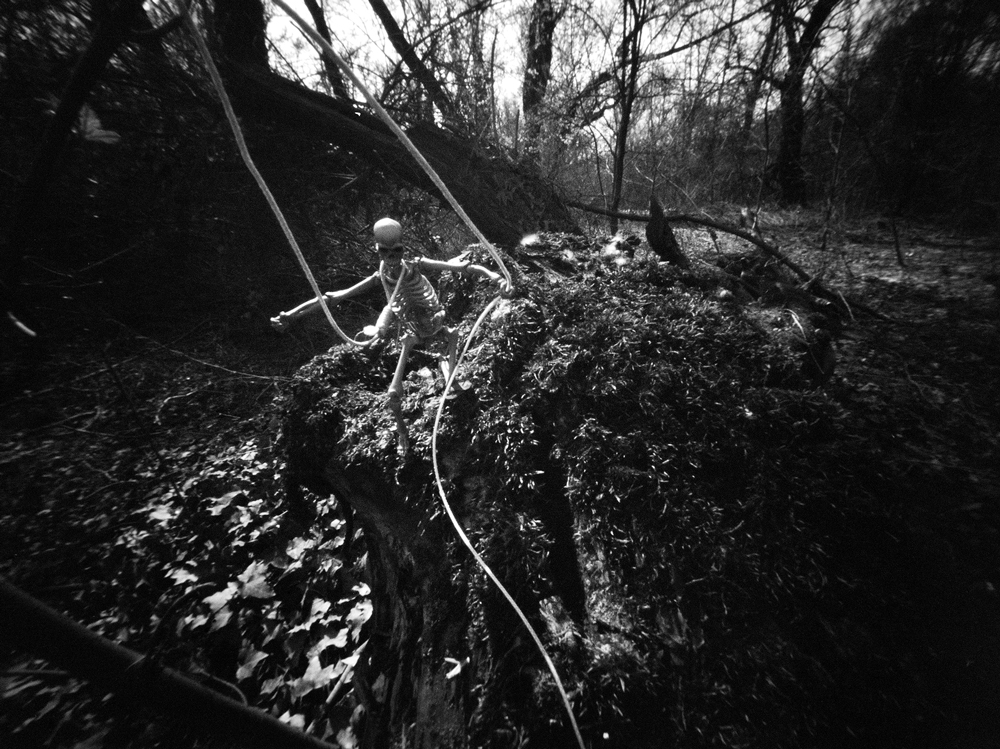 In the current black and white series, Janko Belaj shows us his Suicidal Mr. Bones project. It is a staged conceptual photo story, both metaphoric, and autobiographical. Seeing his photographs, he wants you to feel good, have a smile on your face and peace in your heart. Suicidal Mr. Bones is a figure that speaks on different subjects that the author finds meaningful. He is an Alter Ego in search of what living with issues could be. He reveals a life that is hard but beautiful. With his studies and visual metaphors, Janko invites us to honor, embrace, and appreciate every moment of our lives.

The basic concept was inspired by 20th-century comics, speaking with sarcasm as a down-to-earth language. It is the kind of language we would use talking to a friend and making jokes about the Meaning of Life. His photo story is playful and deadly serious, all at once, almost like the Dance Macabre of the 15th century. Belaj creates his artistic genre of allegory on the universality of death and the fragility of lives. His dark and suicidal subject also extends positive messages. Life is hard, but we still have to be playful, emphatic, grateful, and alive. 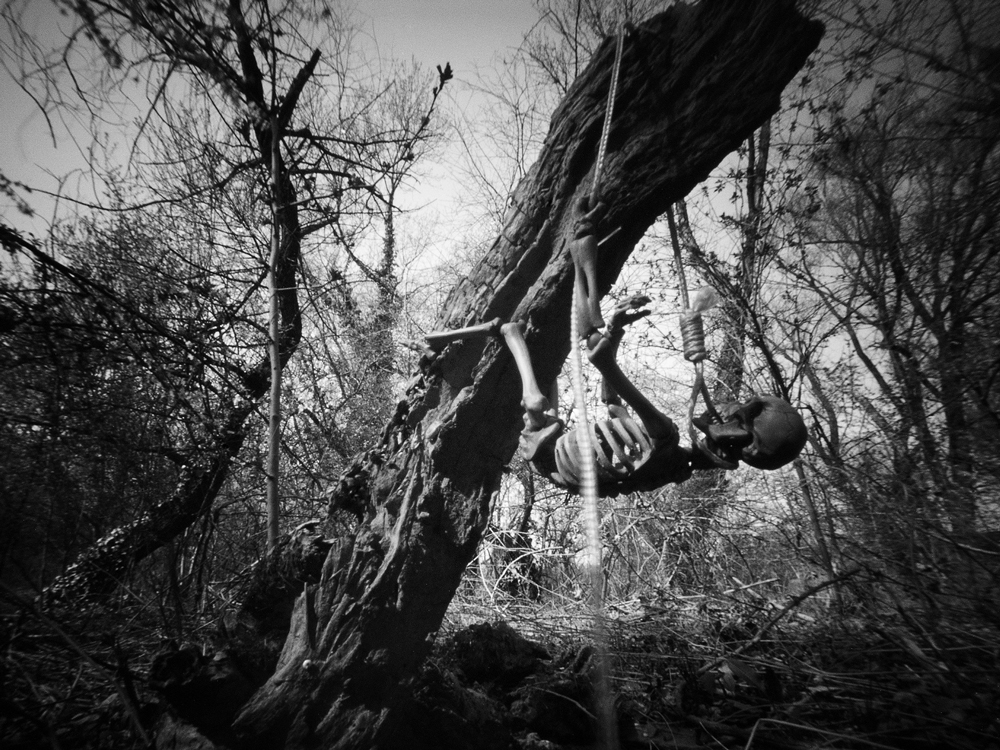 Janko Belaj (born 1965) is a Croatian photographer with a background in commercial design and programming. He is a freelance photographer, Media, and graphic designer. Besides digital, he still works with several film cameras. His camera collection, begun by inheritance, today numbers several dozen. As he bought a large amount of efke films of various formats towards the end of the existence of Fotokemika, he occasionally uses some of these cameras, such as 35 mm rangefinders and system or twin-lens reflex medium-format cameras. He mostly uses a large-format 4×5 or 8×10 inches cameras, uusually with normal lenses, but, depending on the project, with pinholes or magnifying glass instead of the lens as well.

Born in Ptuj (Slovenia) and based in Zagreb (Croatia), he entered visual arts early. In the late 1970s published his first photo in an art history yearbook. He was 13 years old. Since the middle of the 1980s, he has been a professional photographer, both commercial and fine art. He worked as a photographer with different publishers, museums, galleries, and nonprofits; he became one of the most prominent heritage photographers of his generation. His photos are in the art history monographs, museum editions, and catalogs; Mimara Museum, Klovicevi dvori Gallery and Museum of Arts and Crafts in Zagreb, National Gallery in Ljubljana, European Economic and Social Committee in Bruxelles etc. His most prominent photographic project is collaborative research between 2003 and 2007 with art historian Marija Mirkovic on visual photo-reconstruction of a Tyrolese baroque painter Johannes Baptist Ranger (1700 – 1753) in Croatian monastery Lepoglava, see ik-ranger.eu.

As a photographer, he was interested in historical, alternative, and Avant-garde processes. In 1998 he founded the first Croatian Web community fotozine.org Fotozine.org, one of the oldest European photo-sites still operating. He is an active member and president in his third term of the Photography department in Croatian Association of Artists of Applied Arts ULUPUH, also a member of Kadar 36 Photo Group, and Croatian Freelance Artists’ Association HZSU. His work was awarded and exhibited in solo and group exhibitions, and published, both printed and online. His most recognized images are landscapes from portfolios Lightcaptured, 2000 – 2006; Lightcaptured Second Edition, 2005 – 2014; Heart of Istria, 2009 – 2017; Selfless Landscapes, 2007 – 2017; and Lightcaptured Third: Wide Views, 2006 – 2017. Important national recognition is on his conceptual and experimental ongoing projects and portfolios My Hat, and Suicidal Mr. Bones. 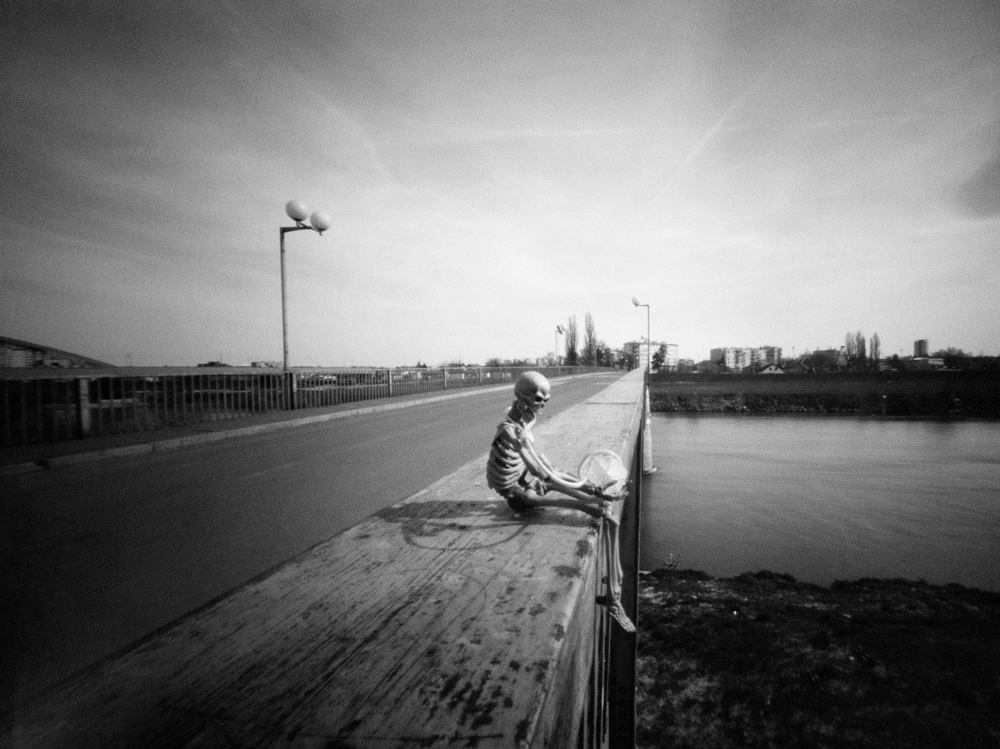 © Janko Belaj, Crystal Throwing in the Sava River, from the Suicidal Mr. Bones, 2014

How to kill lifeless?
I use photography to document diverse scenes to address customer preferences or document landscapes I find myself but with a series Suicidal Mr. Bones. I set out to explore the outcome, which I am not trying to define in advance. The initial concept of following Mr. Bones as a suicidal character from satirical Italian comic book Alan Ford created by Magnus and Bunker, who is irrevocably lost in his existence, unsuccessfully trying to kill himself, becomes a sort of alienation of the individual in general. After all that has happened to him, I leave Mr. Bones to pull-up and survive. The final reception of his fate no longer depends entirely on my creation or the concept, but Mr. Bones appears as an active figure in our collaboration. Finally, those are his bones.

Due to adverse feedback, creative answers, and different emotions, when I introduced fragments of the project, I decided to cover-up the original guideline for some images, and only the title of the pictures leads the observer to go in a manner that I created. In doing so, I didn’t want to modify or hold-the-hand of the observers as he sees the story. Nevertheless, I appreciate different interpretations of single images or the whole series. The final result of the project confirms the initial self-abnegation. That way, it suggests significant insights into the coexistence of the artist, characters, and audience. 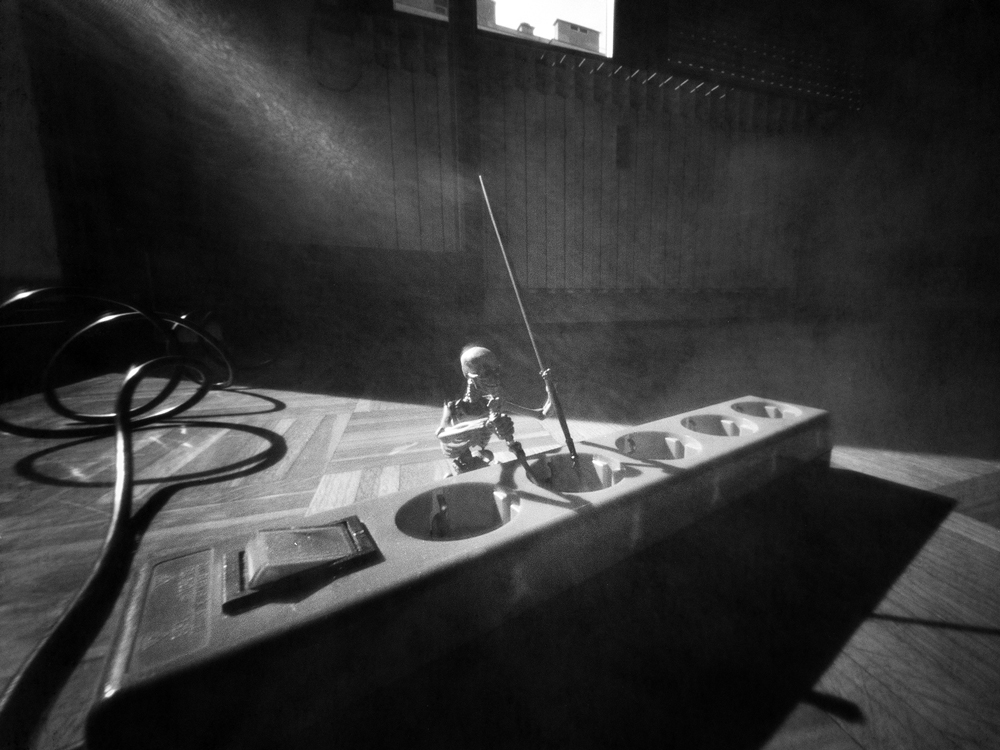 © Janko Belaj, Self fried in Cold blood, from the Suicidal Mr. Bones, 2014

Janko Belaj: Photography has accompanied me from my earliest age. My father and grandfather were involved in photography, and according to family albums, so were my elders, too. My parents were professors and scientist and during our childhood, my brother and I went with them to their field research frequently. It was a job for them and a trip for us. On one occasion, back in 1977, mother discovered lost and forgotten painting which should have been documented. Our car broke in front of the chapel in the middle of nowhere, and my dad’s hands were greasy from the engine so I had to take my dads’ camera and take a picture of my mum’s discovery. A year later, my photo was in a scientific paper magazine, and I got my first fee for photography when I was thirteen. I was out of my mind. I think it was my decisive moment.

Janko Belaj: I understand this question in two different ways. First, when I decided to be an artist; second, when I discovered how to be an artist. I often say that I am not one of those who only live from photography, or who only live for photography but rather dare to say that I live photography. Most of the day, but not exclusive! I would describe myself as a multimedia creator, and that is not an overnight process. I am still exploring and documenting the world around me, learning, challenging myself. Being an artist isn’t just about doing nice things for the wall or something intriguing to discuss. Maybe both or maybe something completely different; it is a process. 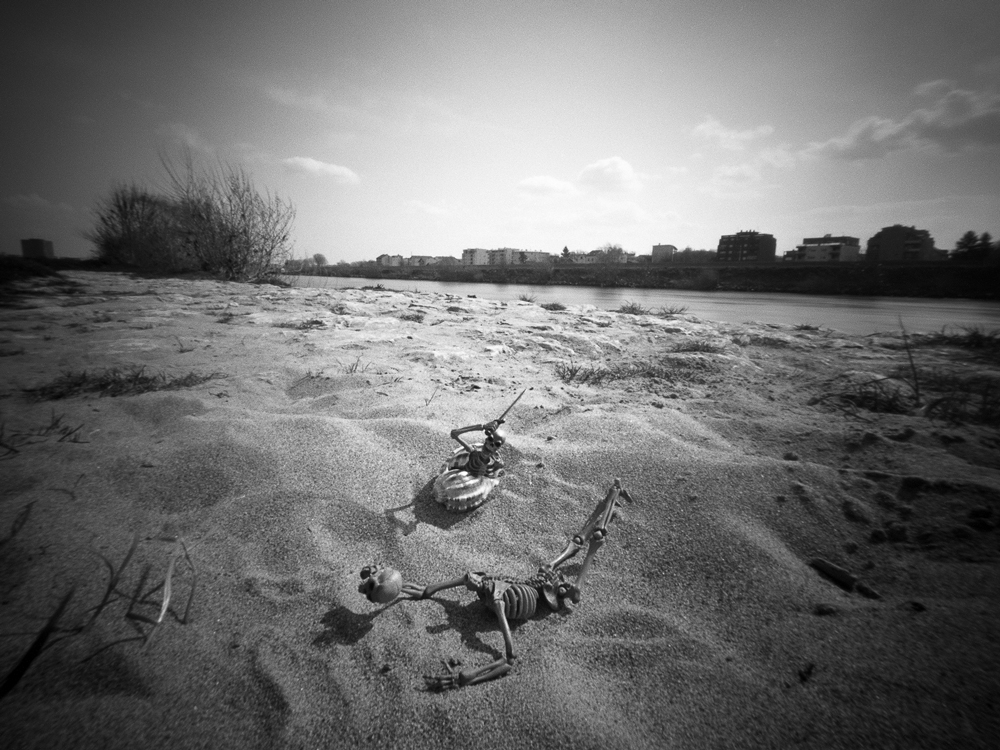 Janko Belaj: There are too many challenges in the life of a professional photographer. It is hard to list them in just a hundred words. First of all, the main challenge is how to survive as a photographer in Croatia. Today, going international is a dare and necessity but I’m not rushing because I feel that I need something unique to offer, photography with meaning, not just a pretty picture. My creative challenges are not likes on the Internet, but how to stage silly ideas with clear photography that are running through my head. I am sure that Photoshop would be an easy way, but I am more challenged in alternative processes and experimental photography. 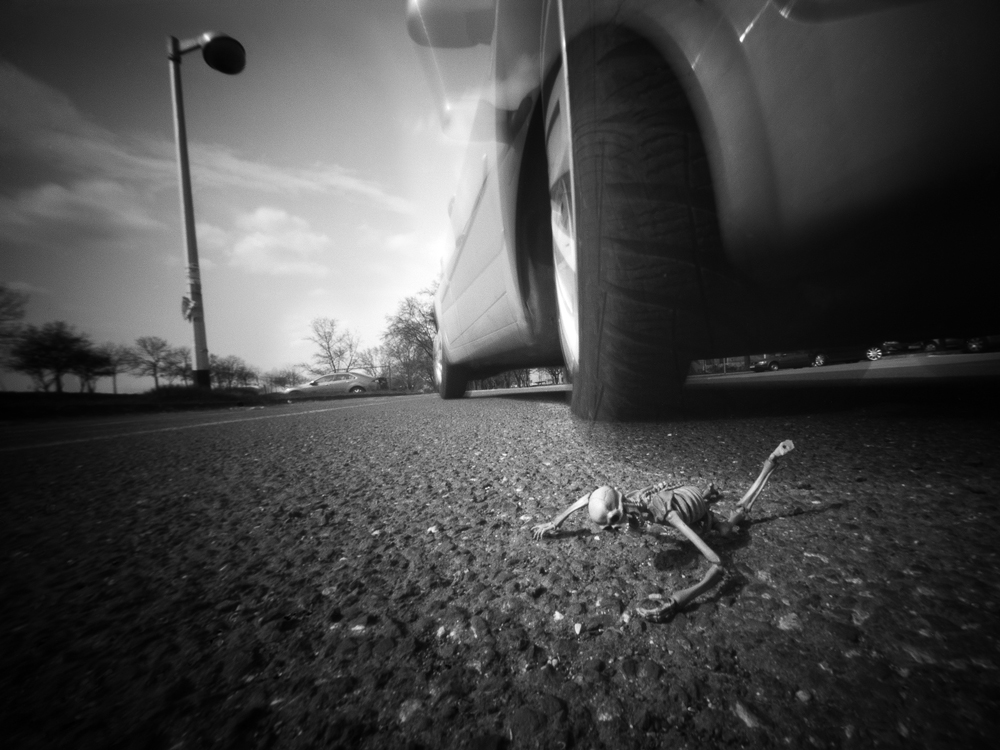 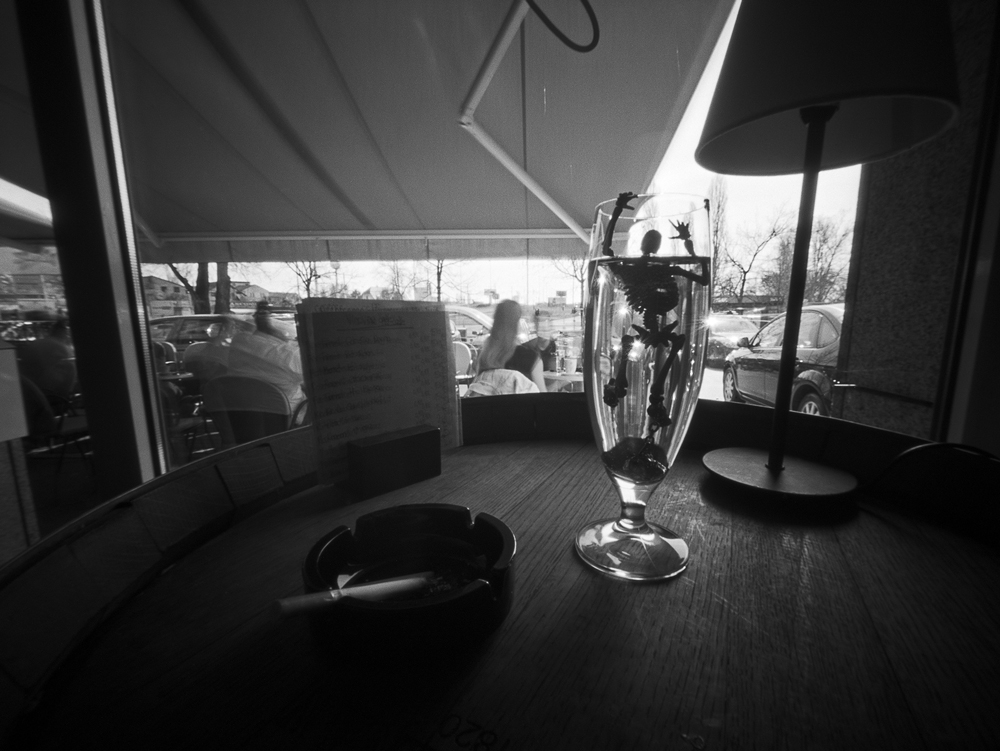 Draženka Jalšić Ernečić:  Is there anything you would like to tell us that nobody has ever asked you about photography?

Janko Belaj: Not really. At least now I can’t think of such question. I’ve been active on Fotozine.org community for about 20 years, until then on Usenet, and even before that on BBS (Bulletin Board System). I wrote a beginners photography guide for colleagues at the university in the early 1990s, and later discussed photography topics with my colleagues and friends on our photo-coffees and photo-beers. Today I really don’t know if there is any question I haven’t answered. 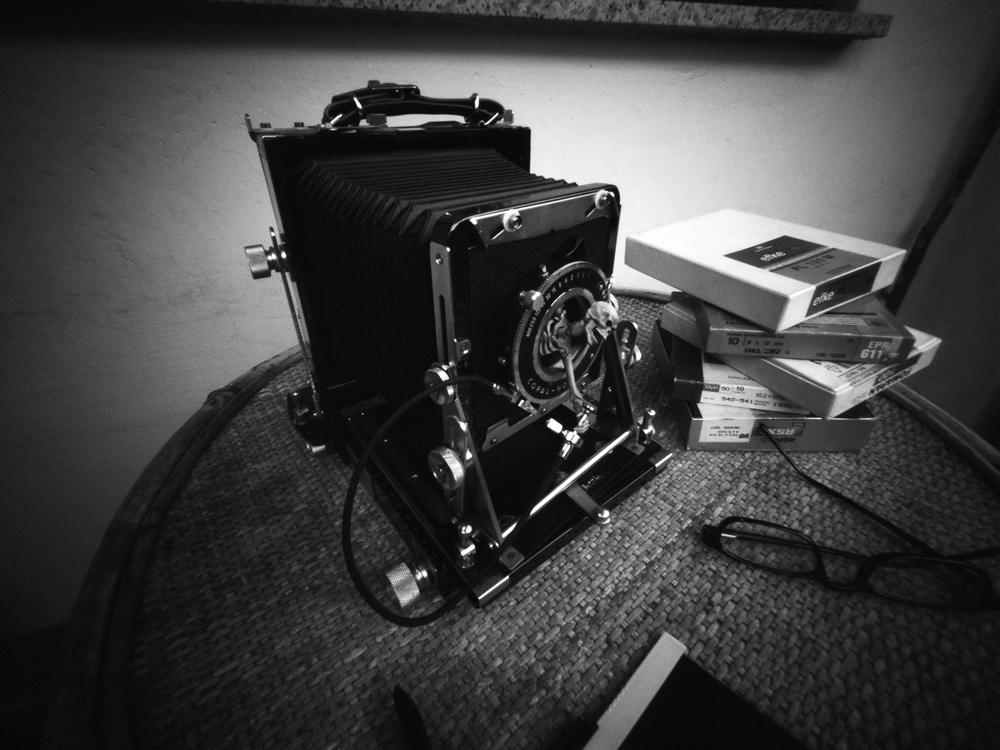 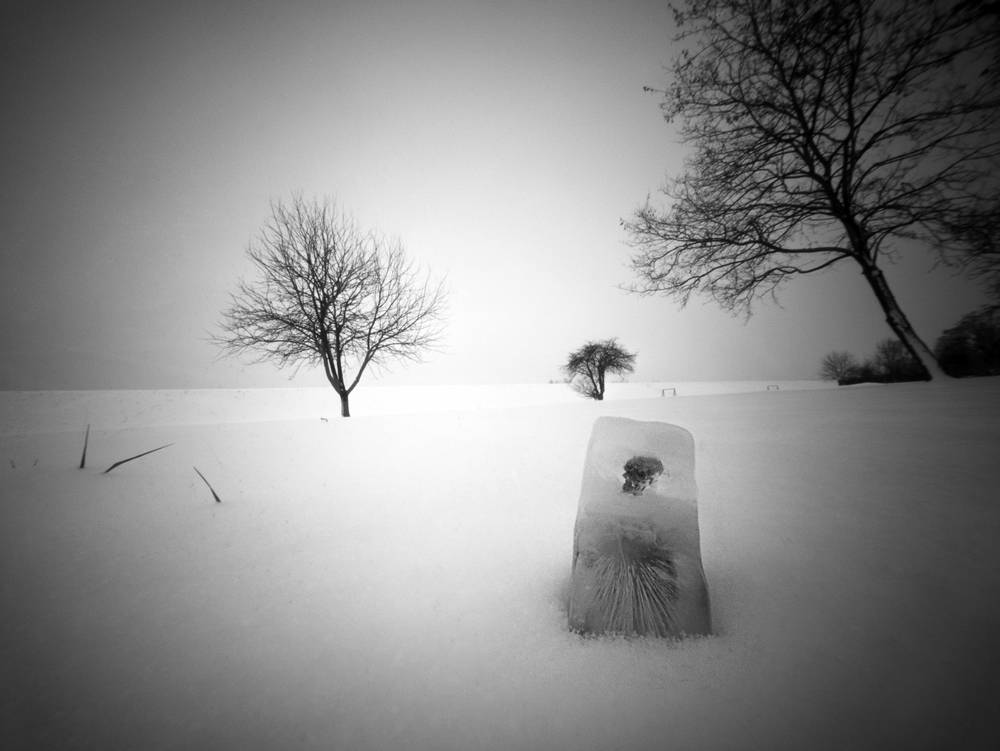 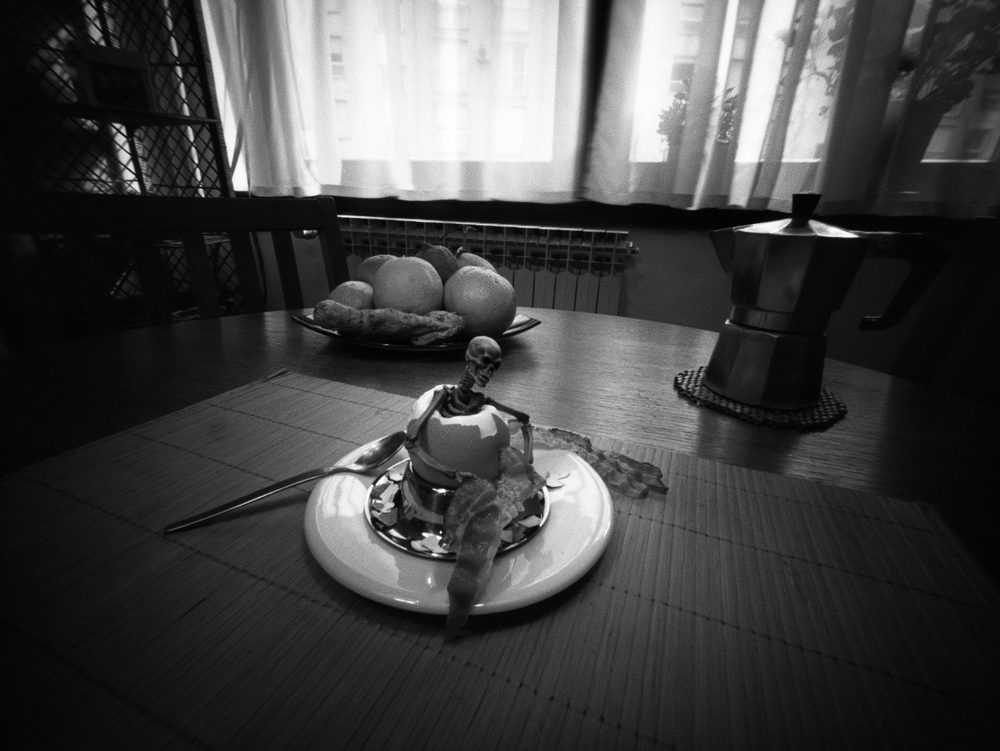 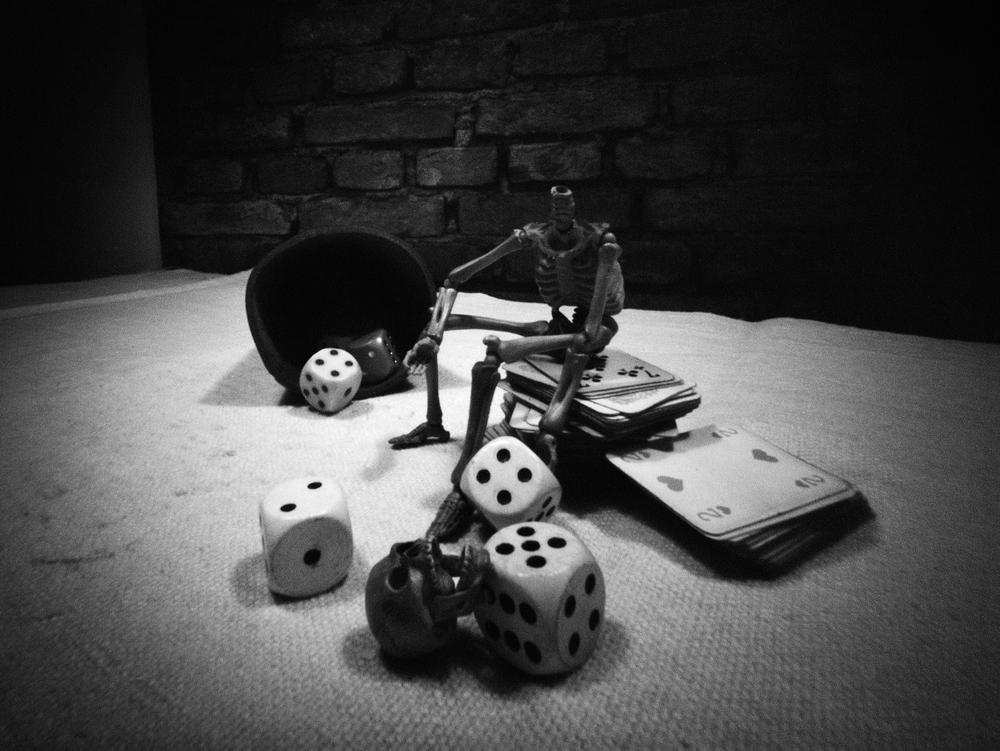 Janko Belaj: There is a common expression in Croatia – A lot of nice things, but I am not allowed to say. – It is a joke with a political background from an old Croatian TV series. Besides working on remodeling an old TLR camera into a new pinhole camera with different technical capabilities to suit concept that is still in my head and sketchbooks, I have some projects to finish. My planned deadline for Mr. Bones’ second exhibition is long gone. The results I got were not the right ones, so I started from the beginning. The topic is still top secret. Also, there is plenty of work for some other projects in several photographic associations in which I am active. 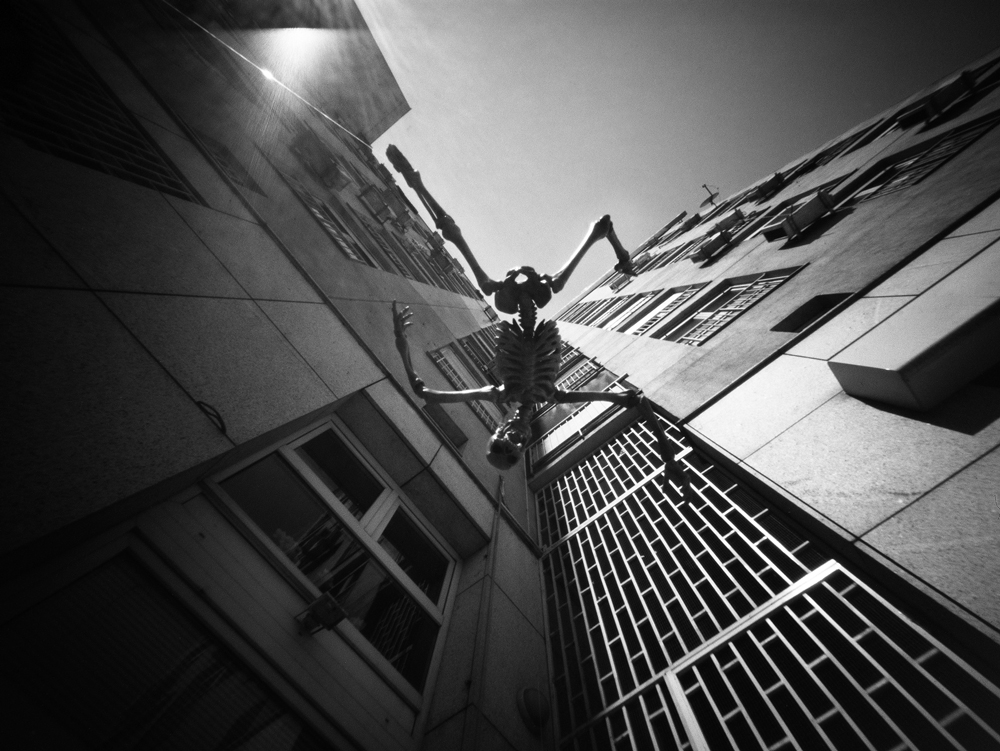 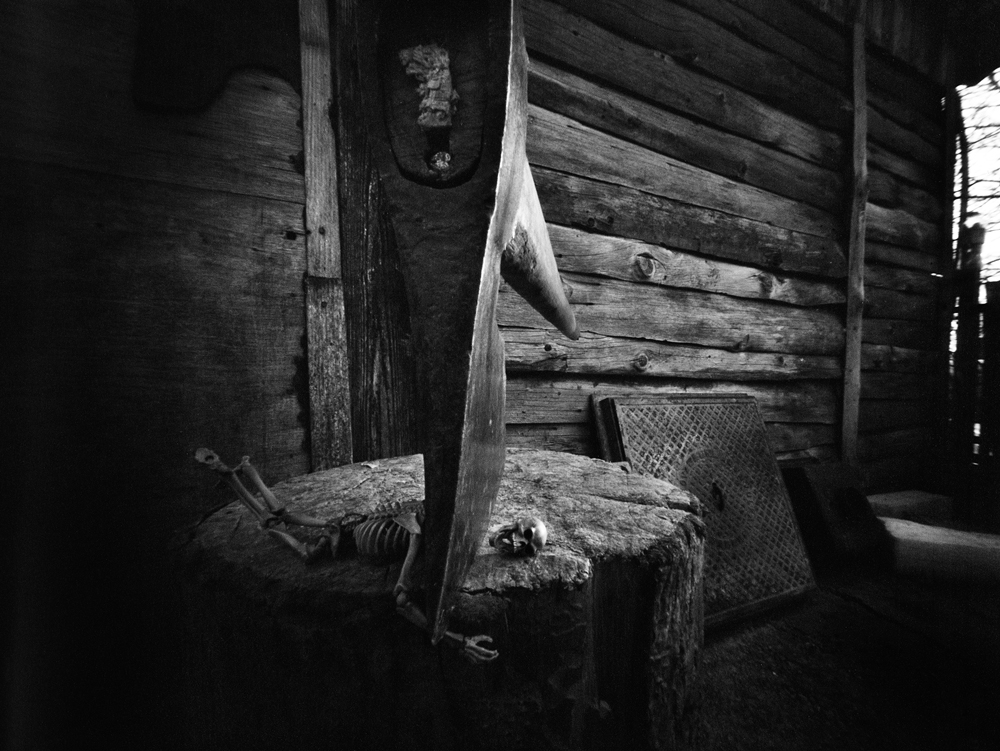 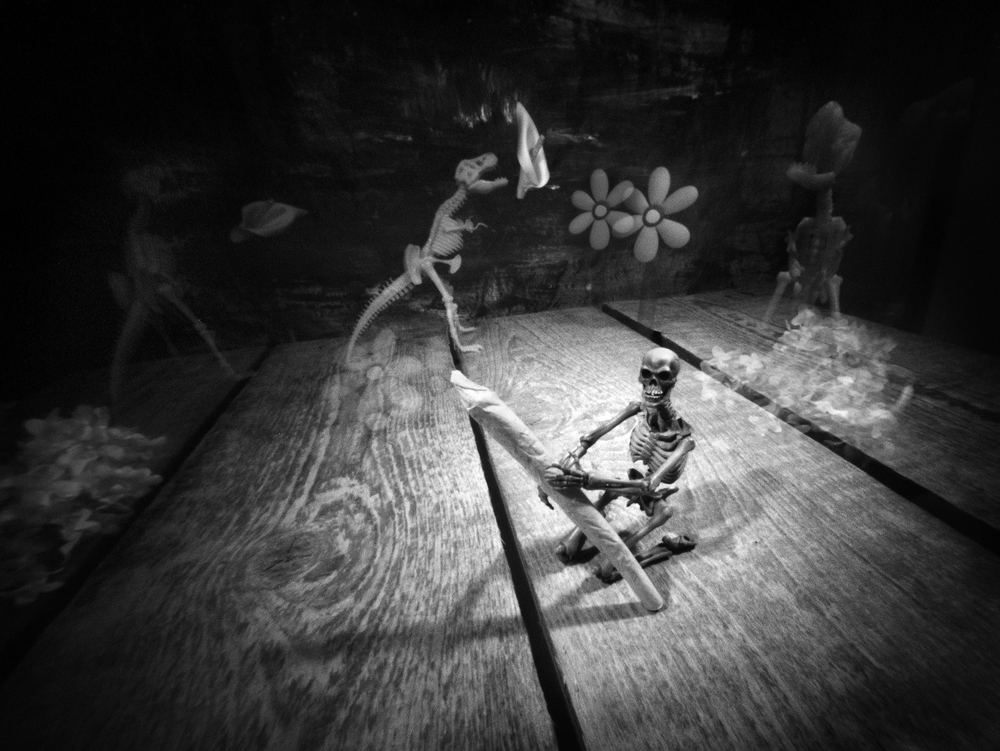 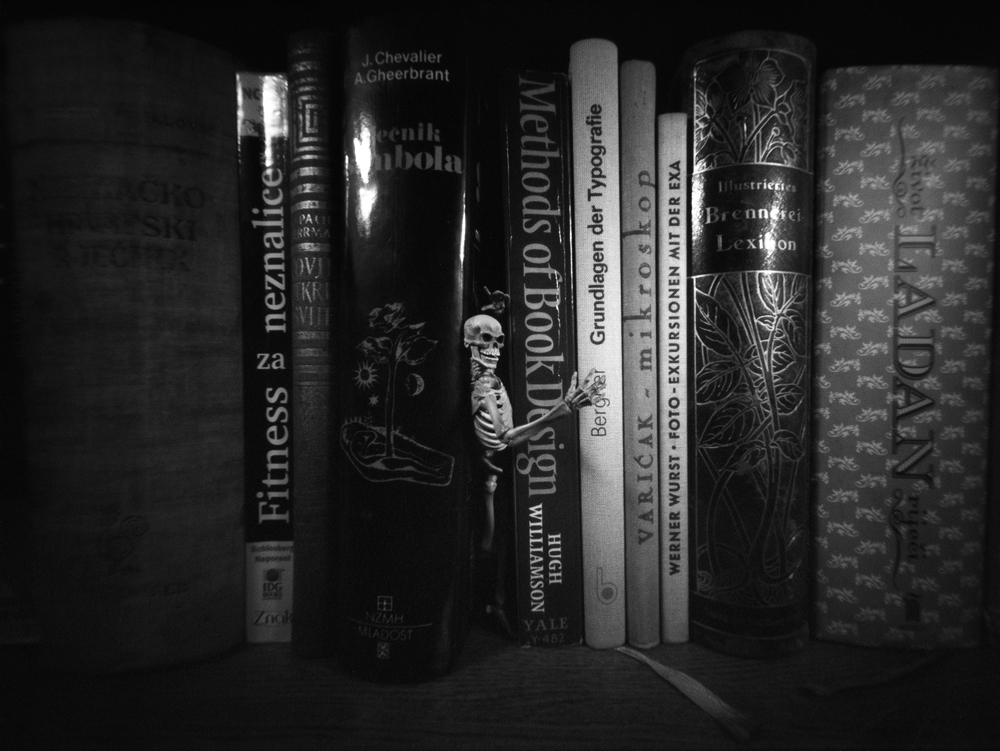 Draženka Jalšić Ernečić is a senior curator, researcher, writer, editor, and reviewer of visual arts and photography, having published criticism in the history of art and photo collections,
graphic design, packaging, and photography. The focus of her endeavors is to work with photographers and photo communities to promote global cultural exchanges in photography.