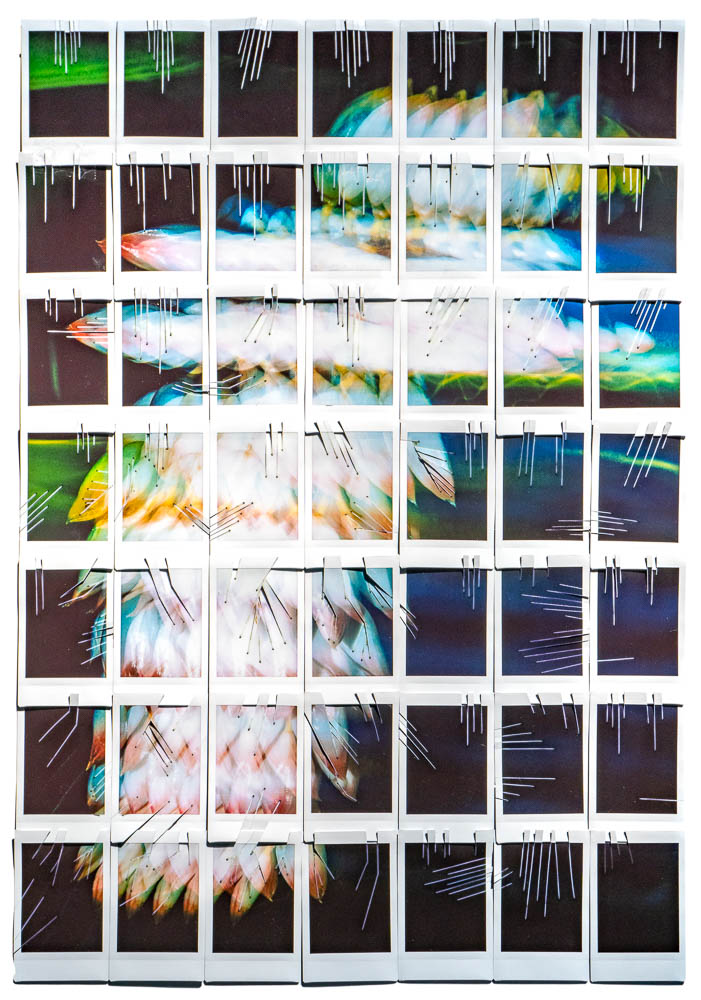 In Immortal Chromatic, artist Kevin Hoth transforms the process of destruction into a cathartic act. Initially serving as a coping mechanism to a singular traumatic event, the project explores the inherent fragility and impermanence of life, and our inability to ever truly be prepared for what may come next. Hoth begins by photographing flowers with an instant camera, cutting and burning the images as they develop to irrevocably alter the trajectory of what they will become. The outcomes are unpredictable, but the way in which they are combined and arranged to create new compositions is a thoughtful and intentional process. In this way, the artist’s intervention is both an assertion of control and an exercise in letting go; a poetic acknowledgement that sometimes you have to destroy what is in order to realize what could be. 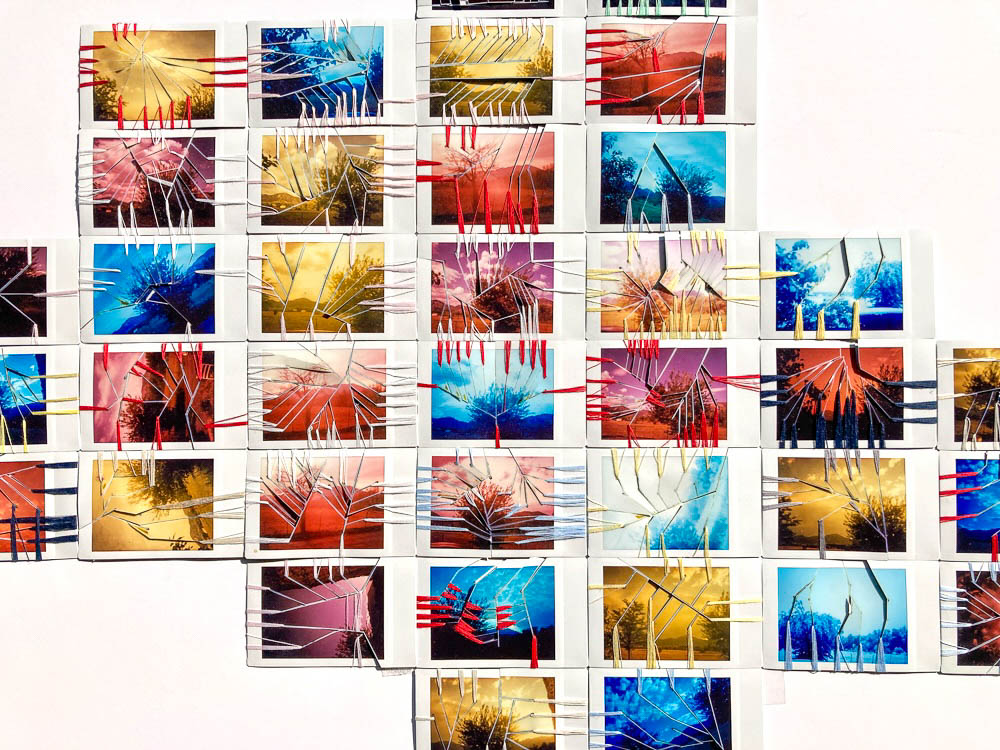 © Kevin Hoth, Get My House In Order (dimensions expanding – never to be finished), 2020

Flowers have many purposes in our natural environment. They act as protection for seeds and allow for self-propagation by attracting pollinators with their color and scent. Some flowers have infrared color markings that can only be seen by bees or birds. Among humans, flowers are ritual symbols of purity, consolation, and hope. My deeply personal relationship with flowers began when my daughter suffered a potentially fatal brain hemorrhage in the Spring of 2016. Aside from the flowers that were sent to her hospital room, I took breaks from being at her side and went outdoors to a flower bed in front of the hospital. It was here that I soaked in the vibrant color of these forms. Trauma has a way of sharpening our awareness and cracking open our perception. Staring into these flowers, it was as if I were staring directly into the source of all life. It filled me up and gave me hope.

I had recently bought a vintage Polaroid SX-70 camera that came with several packs of expired film. I made pictures of the flowers in this flower bed with the expired film. One visual aspect of these pictures that struck me was how the expired chemistry inside the film yielded erratic, amorphous formations that reminded me of fluids in the brain. Fluids that went where they should not have. Moving on from these unmanipulated Polaroids, I created a series of paper-shredded instant film flower images under the title Freshly Cut Flowers. Here I was playing with the duality of creation and destruction that we face every day. As we create our life anew each day, our bodies are slowly deteriorating. Like a body, the chemical picture can only last so long. As soon as the physical image is created, it begins its decline. As I purposely shredded the images, the jagged cuts created new marks. When the human body is injured, a mark is created as a scar, a sculptural record in time. Polaroid images are created when rollers inside the camera simultaneously spit out the image and also squeeze the chemistry into the development space so that the latent image may come into being. When I shred the Polaroid I am using the same parallel motion that created the image to render it unto pieces. I later join two disparate flower captures when I tape the images together after shredding. I think of this as “healing” two moments together. The compression of multiple moments in time into one singular image is a recurring theme in my work.

My most recent work, titled Immortal Chromatic, carries on my previous themes and concerns. I begin by digitally photographing a flower arrangement that contains a species which holds its color even after dying or being cut off from it’s earthly sustenance. I digitally slice up this initial capture into a grid and then create physical instant film modules. Each instant film tile is cut and or burned as it develops. I also use the sun and a magnifying glass to burn the tiles so the intensity of the light at the time of making is reflected in the burns across the tiles. I use the light source which allows images to be made in the first place to scar the photo-object. This again is a nod to the inherent creative power of a destructive act. While these processes violently disrupt the image it also creates new “blooms.” Returning to the idea of compression of multiple moments into singular, physical works, I see the cuts I make as alternate timelines for the internal image. The image can have a multitude of directions depending on how I cut it. This speaks to how a traumatic event might greatly alter who we become. All of the cuts I make are unplanned so there is also a record of my spontaneous choices. Cutting the one-of-a-kind instant film modules also feels pleasantly irreverent, while also being self-critical. In the end, the final works are large mosaics of these instant film tiles scarred through their synthesis.

My goal with these works is to speak to the inherent creation that arises out of disruption, fuse disparate moments, and to create previously unexplored photographic objects. These objects are records of my personal process and control over my own healing. Like all humans, I have experienced traumas in my life both physical and emotional. During one of these eras I felt that my soul had indeed been torn apart. At rock bottom, I found my creative practice in earnest and began to use it to deal with life’s challenges. It was as if the universe broke me fully open so I could be my most deeply creative self. Like the song goes, we are spirits in a material world. Our bodies are bruised, beaten and scarred over this lifetime, but there is a deeper part of us that heals over and over and is not bound by time or space. — Kevin Hoth 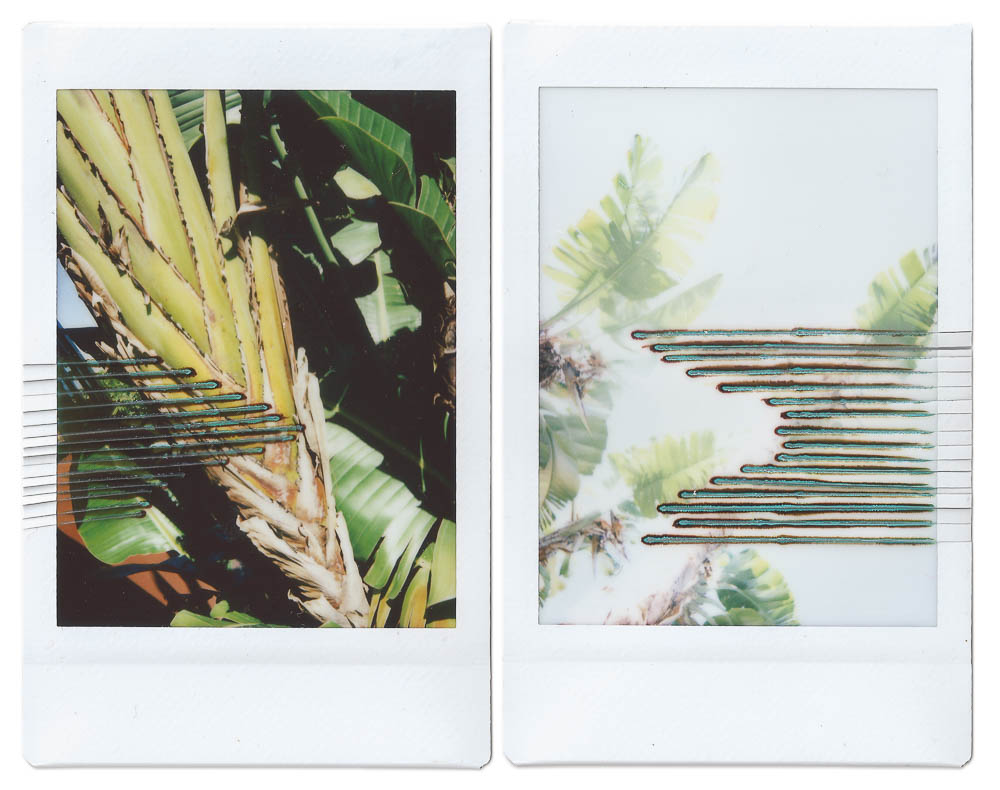 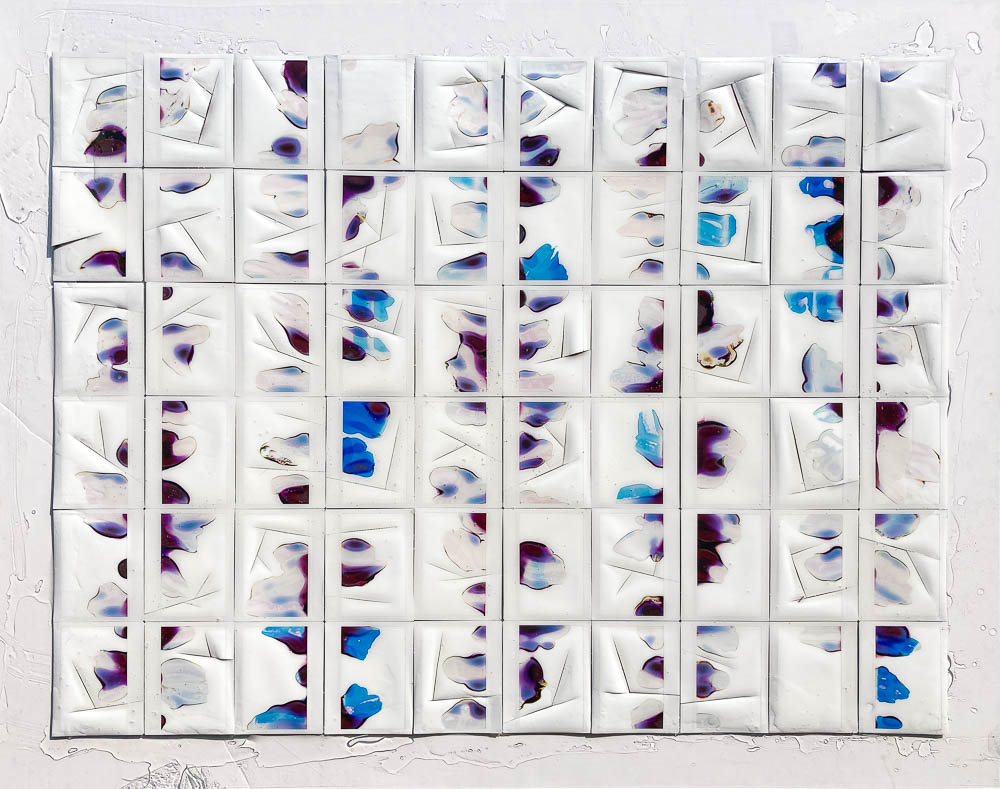 © Kevin Hoth, The Evaporated Liquid From My Expired And Desiccated Body Merges With The Rain Headed East Towards Thom Yorke’s Grandkids’ Umbrellas, 2020 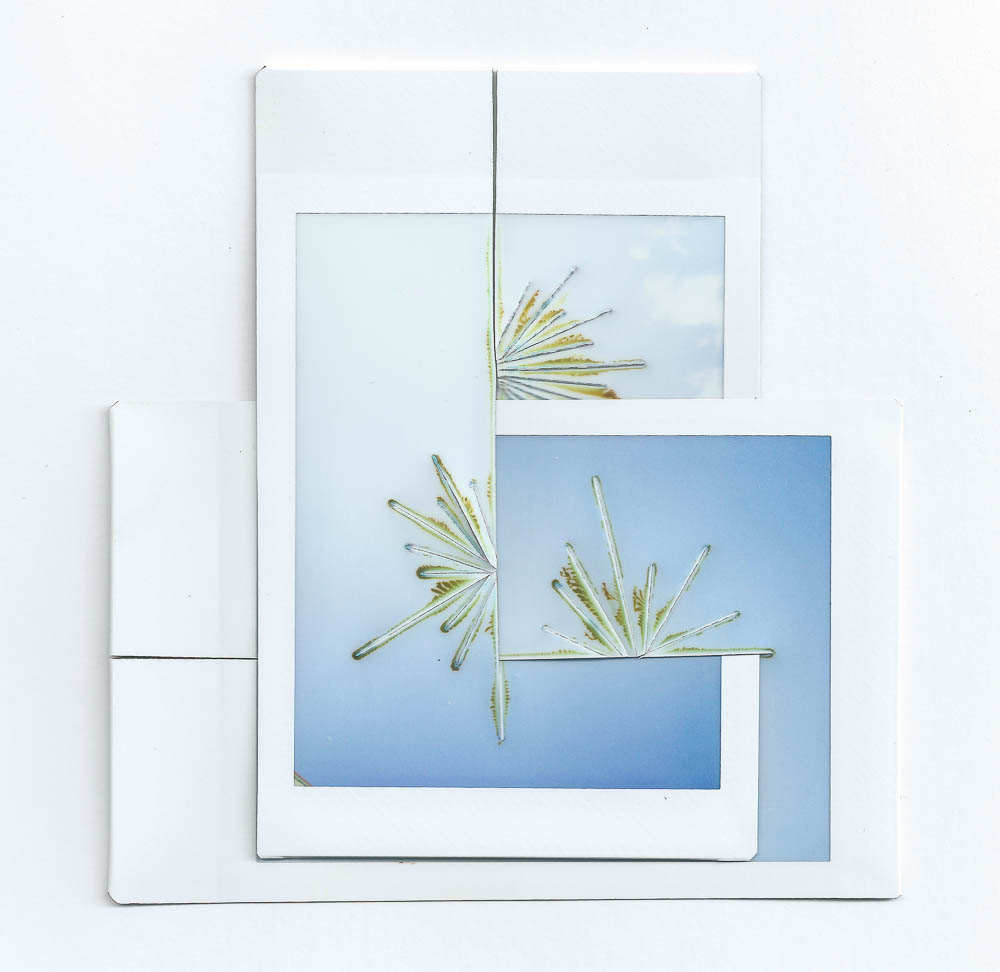 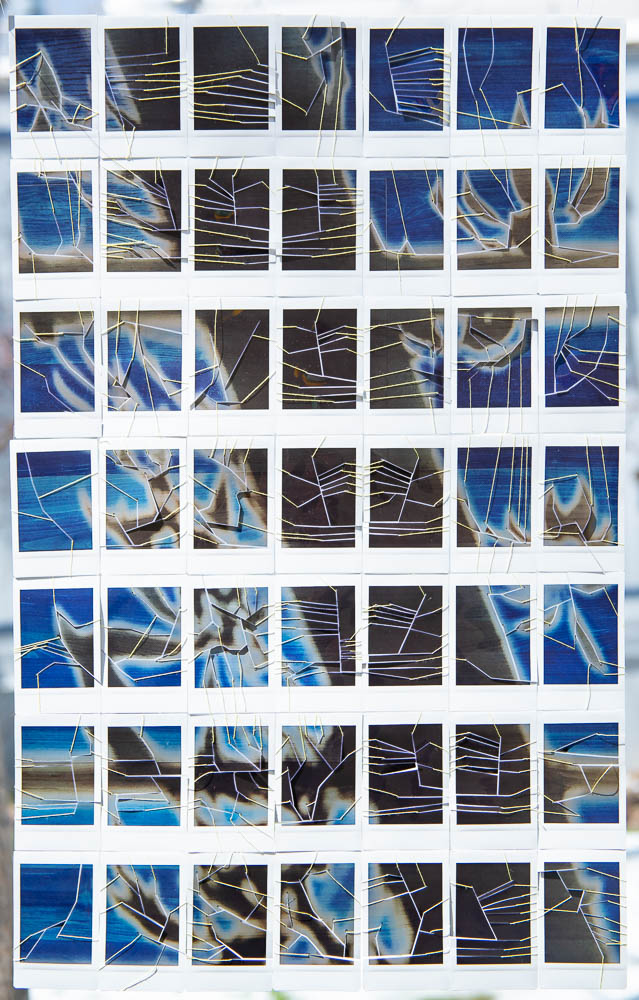 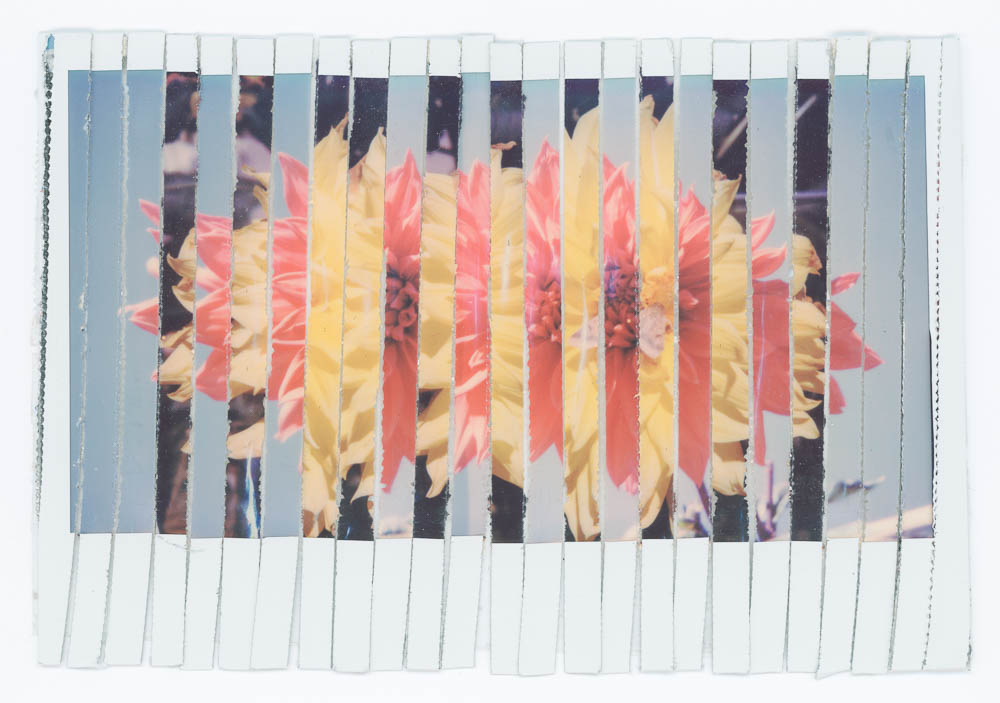 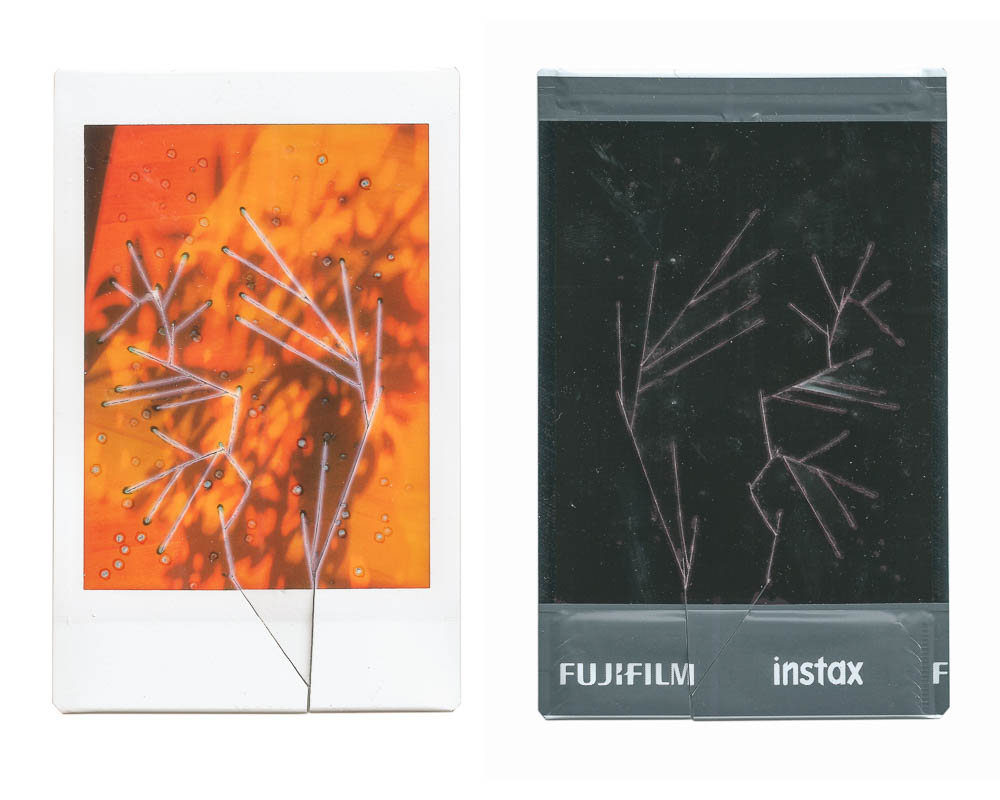 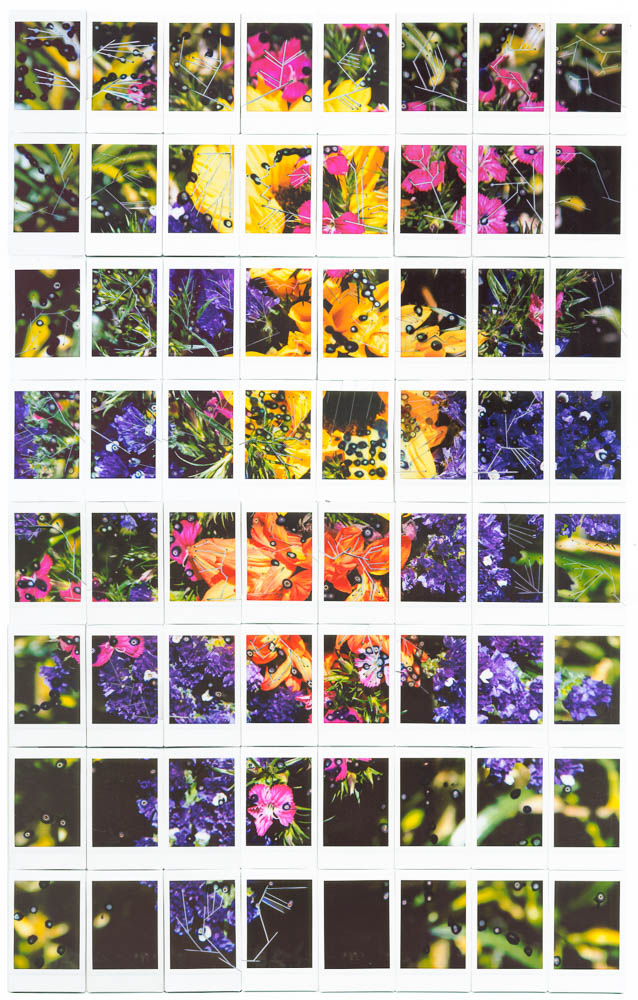 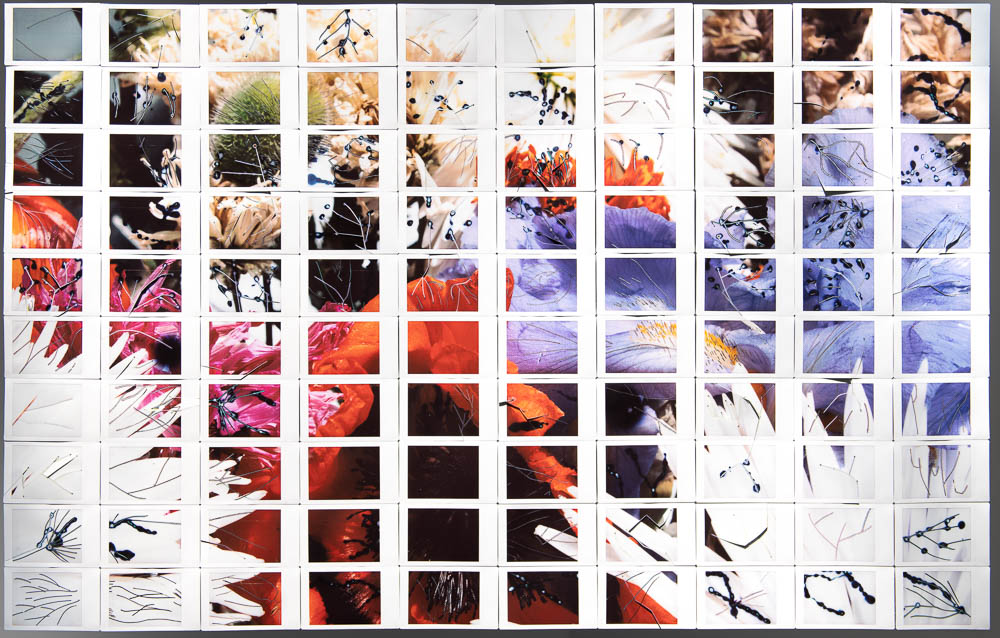 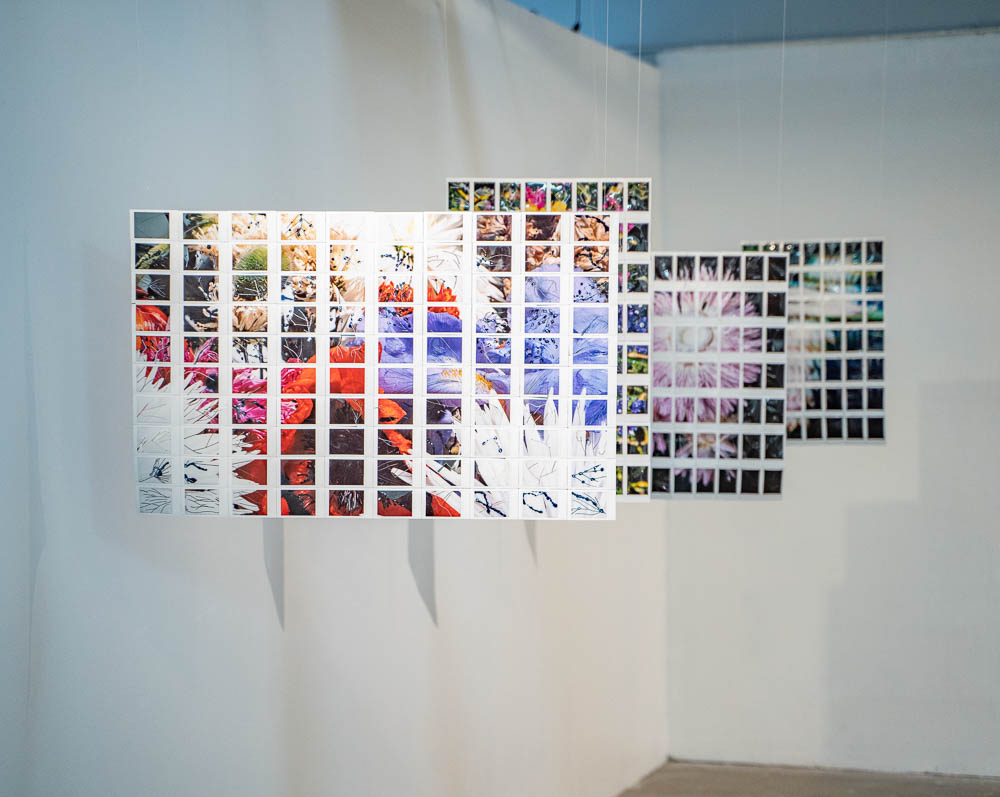 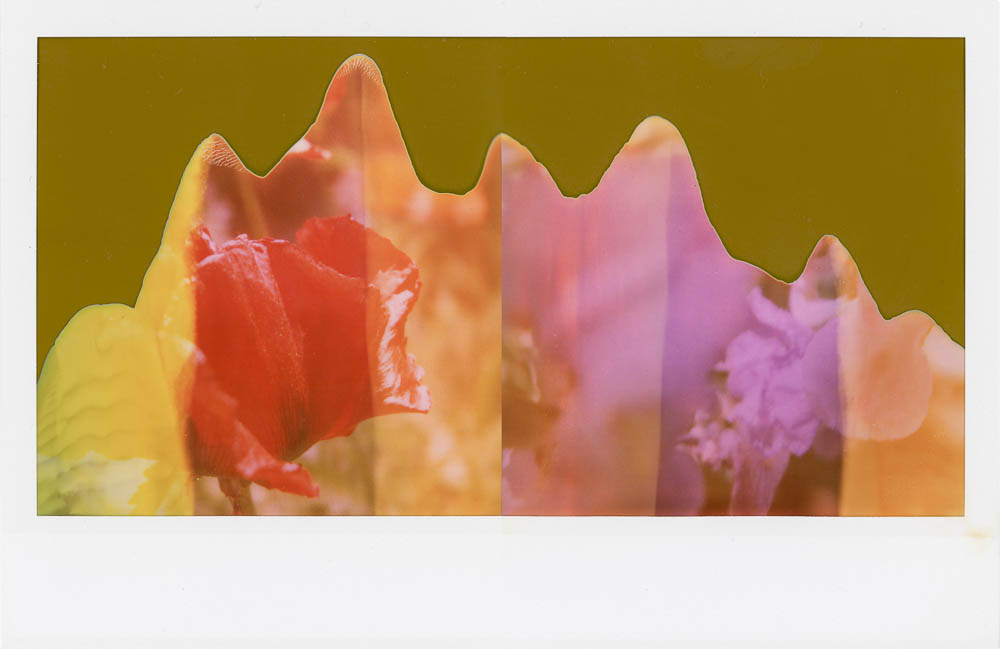 Kevin Hoth is a visual artist and educator based in Boulder, Colorado. He works primarily with photographic media. This may take the form of digital manipulations, instant film collages, video pieces, or slideshow performances. He has two major bodies of work; one deals with expanding spatial perception of landscape, the other deals with image destruction as sculptural creation when applied to instant film assemblages. His landscape project uses mirrors to join multiple spaces into a singular, in-camera composition. His cut and burned instant film work explores time-based image disruption as a transgressive, healing and synthesizing process. Hoth’s work has been exhibited nationally and internationally at The Houston Center for Photography, The Center for Fine Art Photography, Colorado Photographic Arts Center, The Center for Creative Photography, The Medium Festival and The Rhode Island Center for Photography. Recent awards include Top 200 Critical Mass 2019, Center For Fine Art Photography Portfolio Showcase 12 and top ten finalist for the 2018 Clarence John Laughlin Award. Hoth received his Masters of Fine Art in Photography at the University of Washington, Seattle with a focus in Digital Video. He has taught college courses in photography and graphic design at numerous universities for over twenty years and has taught at the University of Colorado Boulder since 2011. He lives on the outskirts of Boulder, Colorado with his daughter Anya and regularly gets woken up by coyote howls, owl hoots and horse whinnies. He is represented by Walker Fine Art in Denver, Colorado.