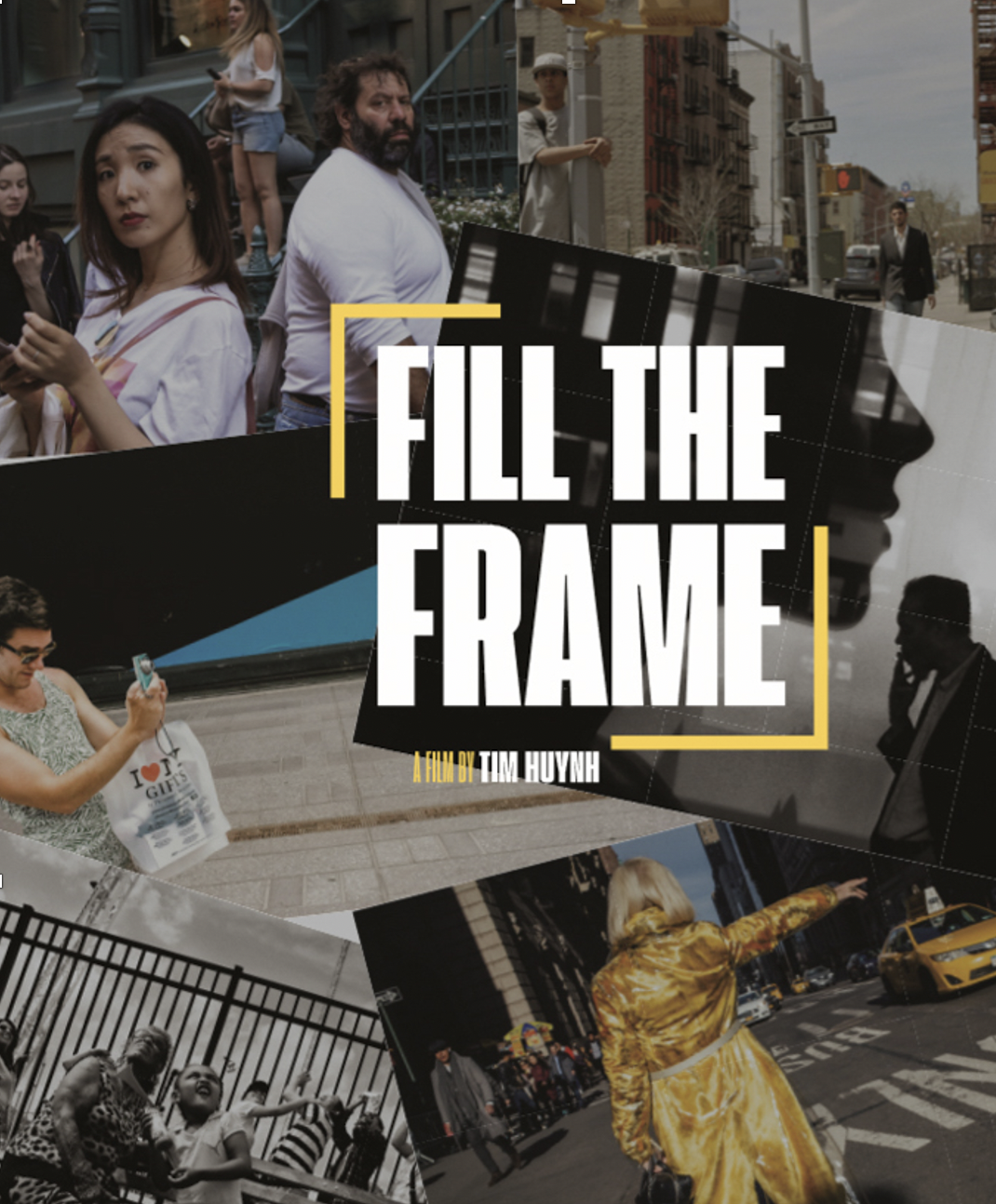 The feature length documentary FILL THE FRAME by Tim Huynh puts the viewer into the shoes of the street photographer in a cinematic, visceral way. It immediately demonstrates the boldness required of street photographers to step in front of their subjects, put a camera to their eye, and ignoring social nicety, make their exposures. In its next breath the film gives voice to the trepidation and hesitancy the photographers have to overcome to make their photos.

The film is told through the photography and stories of eight featured photographers and is interlaced with commentary filling in historical foundations of the street shooting practice. Working on a shoestring budget, from his home in Honolulu, Hawaii, videographer Tim Huynh (pronounced “win”) identified and contacted his eight featured New York street photographers through their Instagram accounts. He made his selections, based on their body of work and his interest in their background stories, (occupations, hometowns, age, and how they made their way to photograph the streets of New York City.) Once he had his photographers lined-up, he jumped on a plane from Honolulu and flew to New York City to spend a day capturing a-day-in-the-life on the street with each of his subjects.

He photographed the photographers working the street, demonstrating their style of shooting, to be used with a voice over narration, describing their objectives, process, aesthetics, and fears. In the on-camera interviews, they described their roots and how their photographic process evolved into the kind of street photography they practice. It is a diverse and eclectic group, evenly split between men and women, and ranging in age from late 20’s to early 80’s. The things they have in common are their love of street photography and showing their work on their Instagram accounts.

Additionally, Huynh interviewed a stellar group of curators, gallerists, photography writers and established photographers to show and discuss the foundational photographs made by some of the greats including, Garry Winogrand, Richard Sandler, Alex Webb, William Eggelston, Joel Meyerowitz, Vivian Maier, Helen Levitt, and Robert Frank. Huynh rounds out his film with a discussion of the influence of social media and the cellphone camera on street photography. 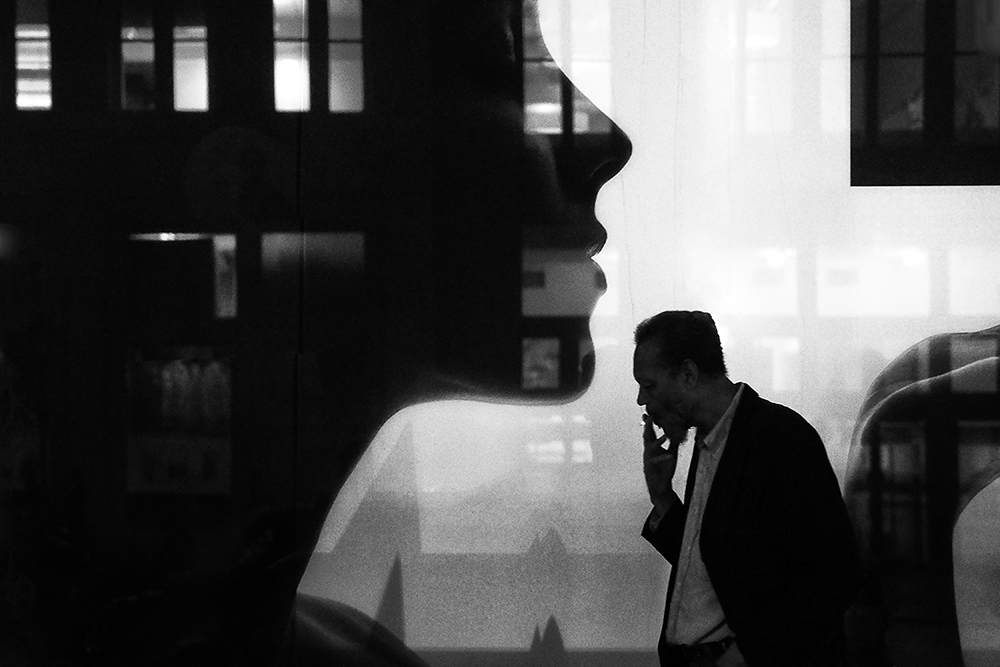 Melissa Breyer came to photography from painting. In her words, “I really gravitate towards black and white, because I love that it’s so stripped down. The color is just gorgeous but … it can kind of steal the show sometimes for me. I’m more drawn to black and white for the impact and just the drama…. Before I started photography, I was a painter and I went to school for fine art…With painting, it’s a longer process and it’s a very singular solitary process. You’re alone and you’re in a studio, with your paint, your canvas and it’s almost indulgent in a hermit way, whereas with street photography, you get to be out on the street, you get to walk, you get to breathe the air, you hear the sounds, you see the people, you’re engaging, you’re talking to people. It is much more immediate…. When you take a photograph, it’s this split second in time and it’s not really fiction or nonfiction. It’s just this brief moment and anything could actually be happening. So, to me, it’s like this moment you can capture, and from there a whole other story can happen…. and as many stories can emerge from this one split second as people who view the photograph.“ 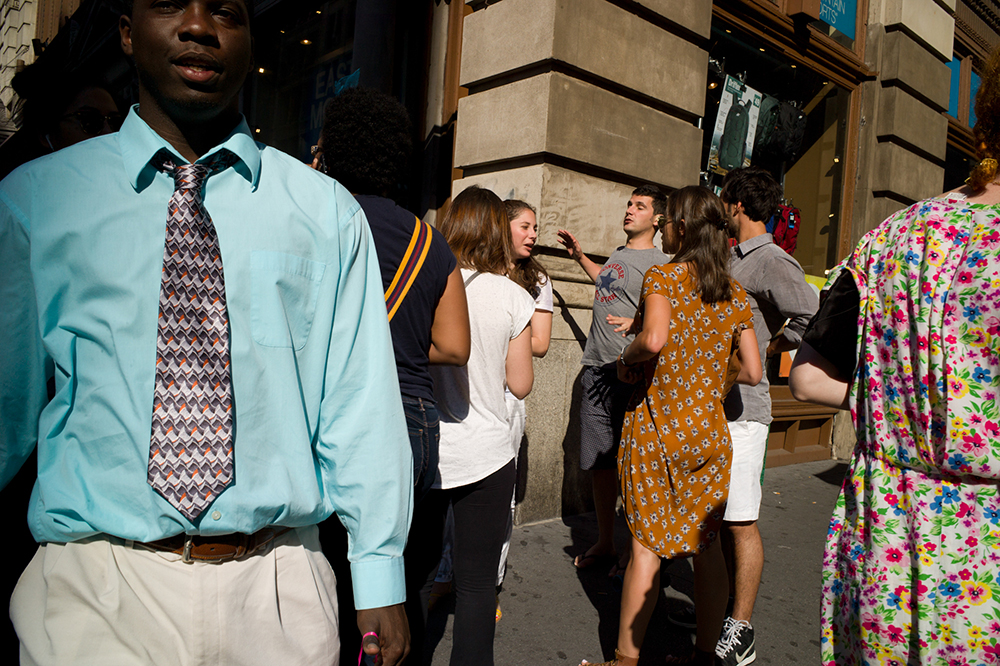 Dimitri Mellos moved to NYC, from Athens, Greece, to study psychology. In his words, “After I moved here, it took me almost a year and a half to actually start taking pictures…street photography for me is something that’s emotionally very difficult and challenging to do. It takes some kind of courage to walk out in the street and take photos of strangers. Part of the style I’m trying to pursue, is something that balances form and content… to make the photograph interesting. It is something that develops organically….Partly because of the architecture, the layout of the grid (of NYC), I discovered deep blacks and shadows and the deep contrast between highlights and shadows, just because of how the city works and how you have those areas of sunlight, and next to that you might have a patch of darkness.” 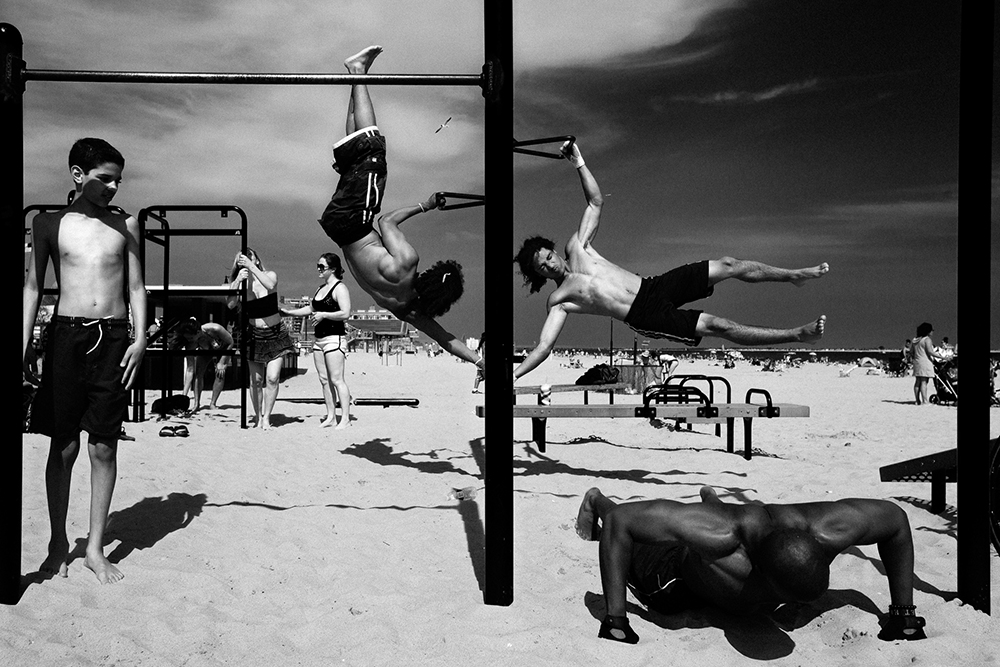 Lauren Welles left an unfulfilling law practice to travel and find herself. She discovered a love of photography that started with her travel photography and brought it back to the streets of New York. In her words, “I was in love with photography. And It’s easy when you are abroad, everything is new and fresh, so I was photographing constantly, but it also kept me very present because I was concentrating on every little detail around me and…. When I came back to New York, I woke up noticing the banal things that I didn’t notice every day, I was noticing because I had my camera with me.” 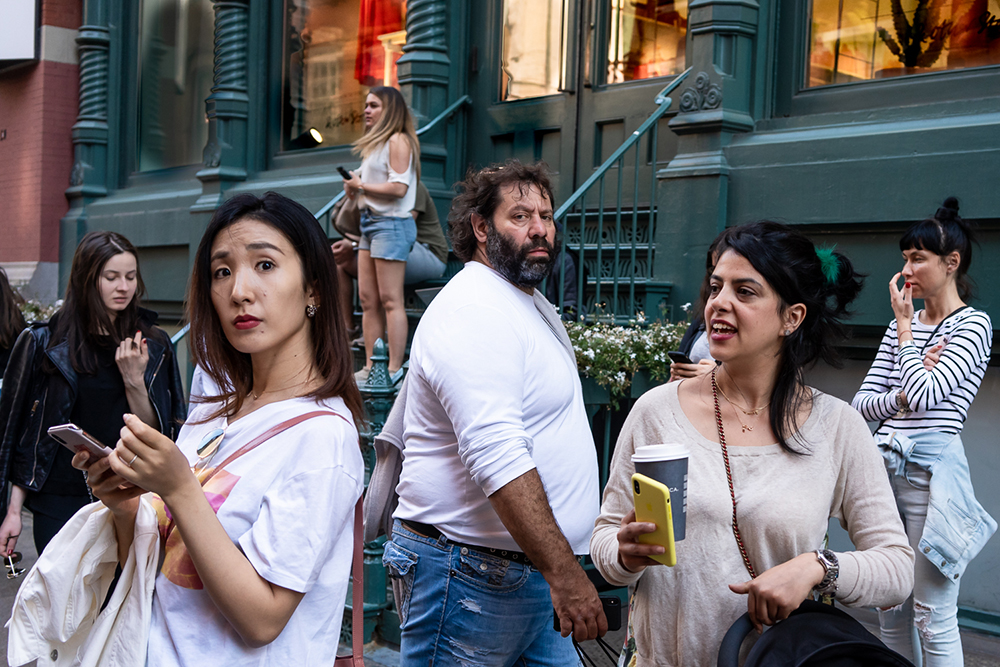 Paul Kessel started photography with classes at ICP (School of the International Center of Photography.) In his words, “Street photography felt like a sport to me. I just loved the idea that it seemed like a sport, like a game. Sports was always in my life, and I really miss sports. . You go out, you hunt, maybe you’ll get something, maybe you won’t. It’s easy for me to find interesting looking people. I can find them a block away. But what I really want to do is have street scenes, where multiple things are going on at the same time, foreground, middle ground, background. And I think seeing Alex Webb’s pictures pushed me at a certain point, I went out trying to do that.” 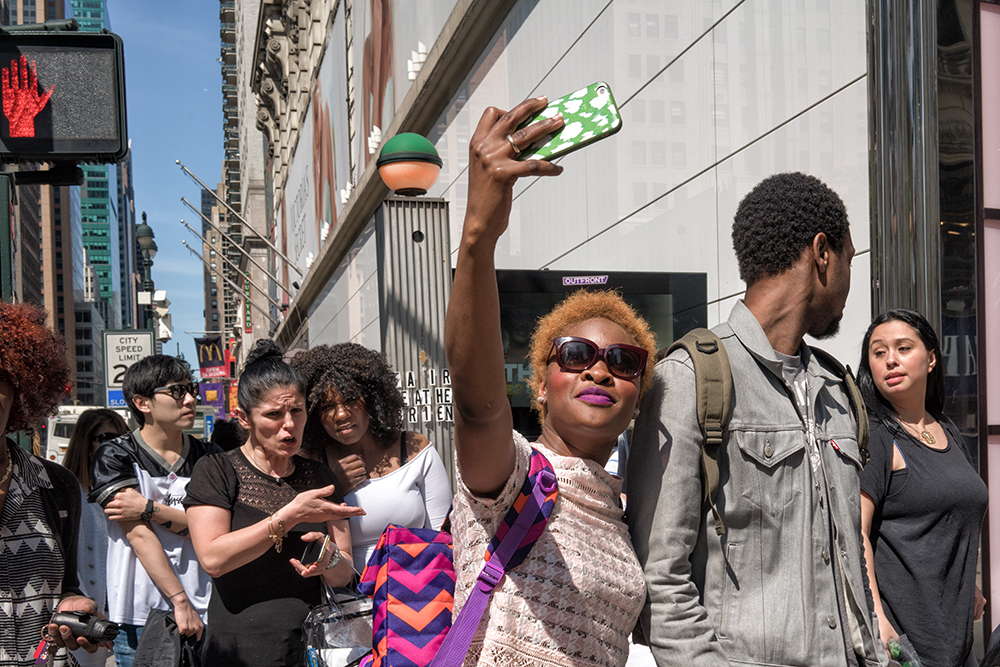 Melissa O’Shaughnessy retired from the financial industry and came to photography later in life. In her words, “Would I have liked to have started in photography when I was younger? Maybe, but then I wouldn’t have had all the experiences that I’ve had in my life, and the experiences we’ve had in our lives are what drive how we notice and react to things…. It’s my life experience which brings me to a place where my experience can become those triggers that make me notice something in that moment. Someone who hasn’t had that would not be triggered or tripped by that little thing going on over here.” 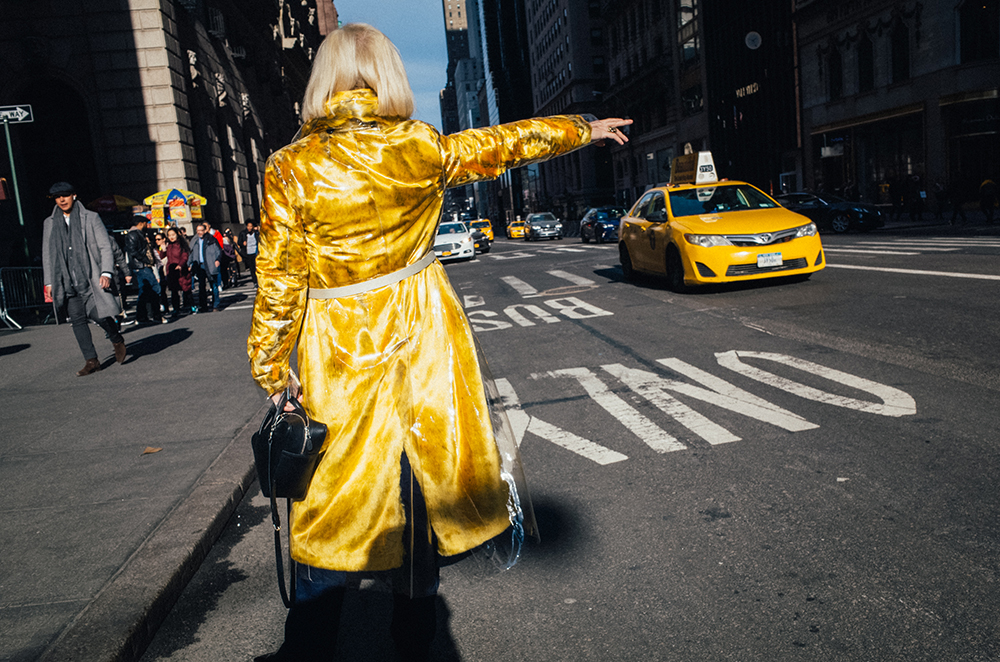 Mathias Wasik is from Germany and when he first arrived in New York, he photographed the typical, famous, sites around the city. After he was introduced to the NYC Street Photography Collective, he took a different approach. In his words, “I originally perceived the city as the subject of my work, of what I wanted to shoot. Then I realized that the city and its buildings, are actually just the backdrop to the theater of life in the city, like the people, their emotions, all those weird scenes that are the streets of New York every day. This is actually what’s interesting. This is what I wanted to put in the foreground of my work.” 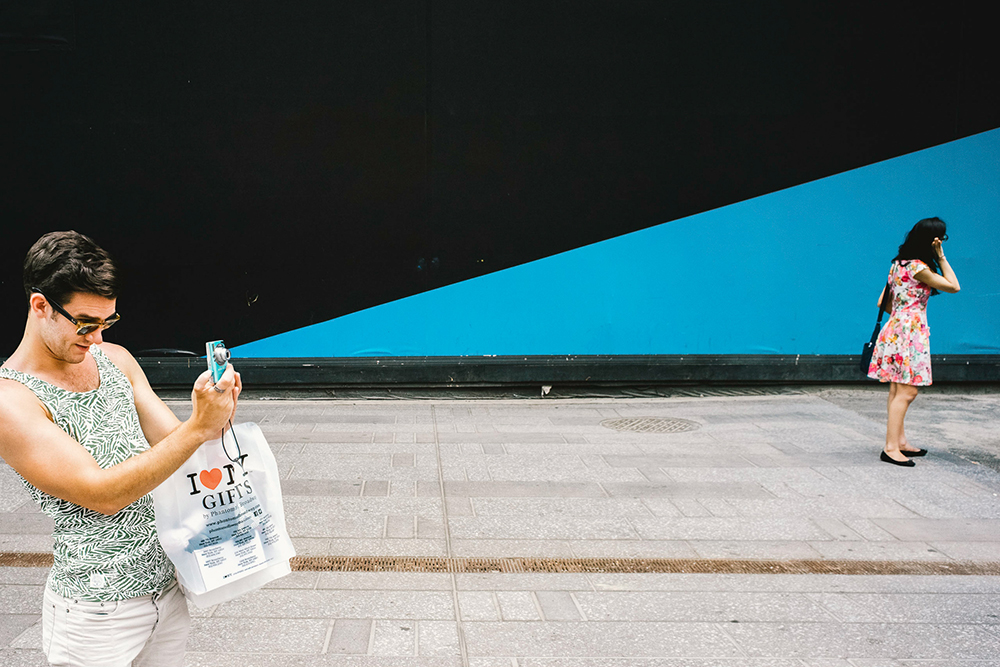 Jonathan Higbee dropped out of high school, to avoid homophobic bullying, and ended up in New York City. In his words, “My process involves mostly looking for an interesting background. I like a bigger element. I don’t like text; I want geometry. That’s the stuff I’m predominantly looking for, whether it’s an advertisement, a street art or whatever. After I find these elements that I get a good feeling for, I return to the spot. I usually return every afternoon until I find my photograph. The most time I have spent waiting for a shot is four months.” 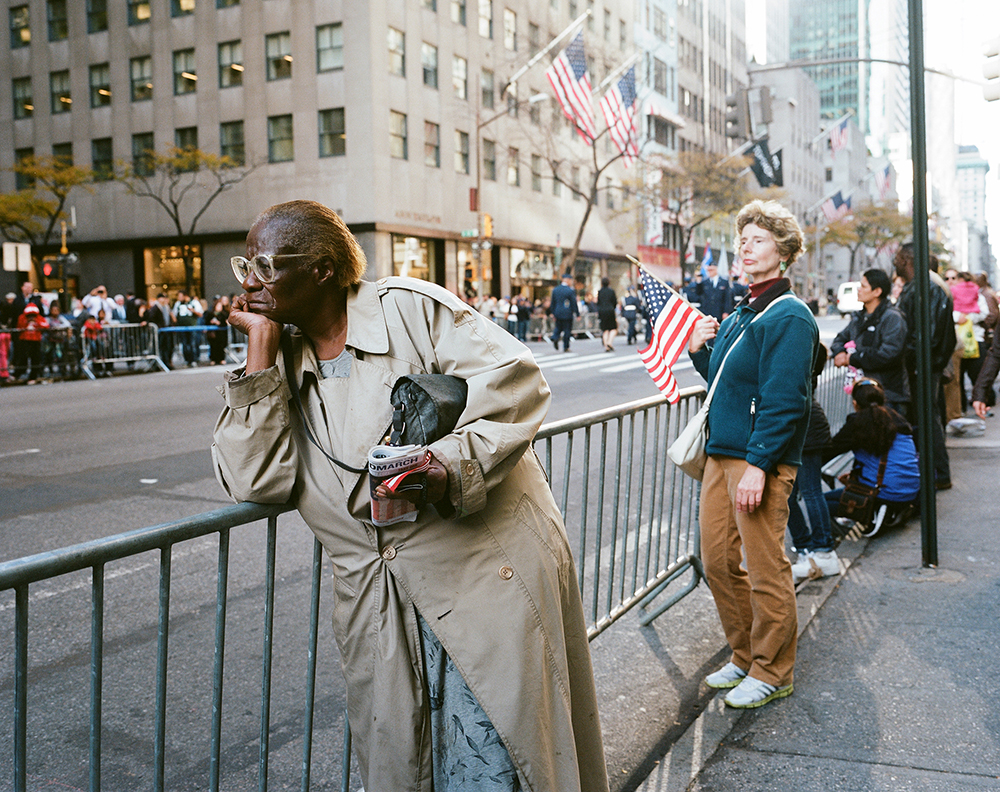 Upon completion of the video interviews and street work in NYC, Huynh returned to Honolulu to finish his documentary. To complete post he mounted a Go Fund Me campaign to raise and additional $17,000, bringing his total budget to $25,000. Having spent 40 years in film and TV production, I’m amazed at the quality he was able to achieve with his limited resources. After watching the documentary, I had assumed he spent six to ten times that amount. FILL THE FRAME is well crafted beautiful documentary on street photography.

FILL THE FRAME, a film by Tim Huynh
Director of photography: Jessica Gallegos.