Ann Mitchell: The Medium is the Message by Aline SmithsonNovember 3, 2011

I am thrilled that my friend Ann Mitchell who is a wonderful photographer and educator, created a blog post for me while I am halfway around the world. Huge thanks to Ann for her contribution of this enlightening essay.

For the vast portion of photographic history, image-making has been a repeatable experience. You captured an image on film and then it could be replicated indefinitely. Photography’s power was in the actual image, and sometimes in the luscious print, but it is generally been viewed as primarily an image-based discipline. Today I’m showing five photographers that push beyond that viewpoint by incorporating an element of “objectness” in their artwork.
Mixing politics, personal experience and fantasy, Dinh Q. Le creates his imagery out of a wide variety of found photographs that are reprinted, cut into thin strips and then woven together. 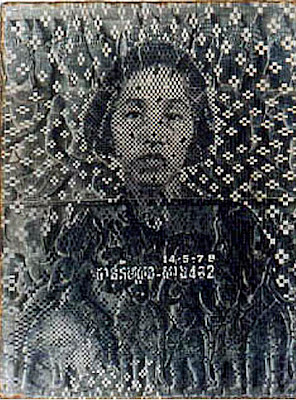 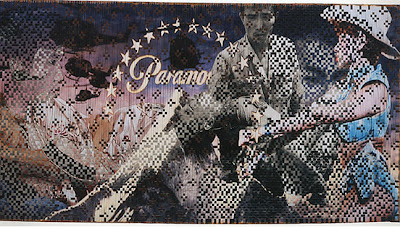 Untitled (Paramount), 2003
Mr. Le uses the traditional Vietnamese mat-weaving techniques that he was taught by his aunt and then finishes them with linen tape on the edges. Initially, he started by working with imagery from both Vietnam and America that dealt with the Vietnamese War and went on to incorporate imagery from commercial sources such as cereal boxes and candy wrappers. His imagery addresses the experience of being between two countries and examines the roll that images play in our memories and imaginations.
Alternative Processes are by their nature unique, but some artists have taken that concept even further by working with “cameraless” images. Jerry Burchfield’s Exotics combined installation with performance to create one-of-a-kind lumen prints, that literally exposed themselves over the length of each exhibition. Working with exotic plant cuttings, collected from the natural environments near the exhibition venue, a seven foot diameter platform was created for the mandala-like installation. 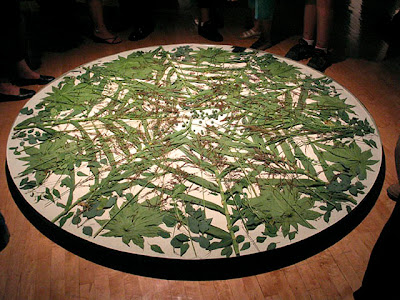 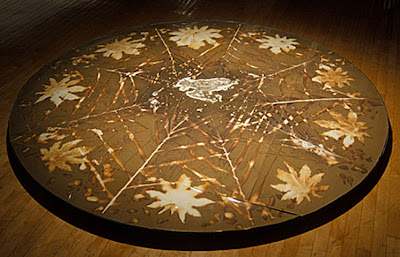 Exotics Riverside, closing reception
At the end of the exhibition (some of which lasted as long as 3 months) the image was fixed and then unveiled at the closing reception. The first image above shows the installation of the plant cuttings on photographic paper at the Exotics RiversideCMP opening, while the second image shows the final revealed print at the closing reception. Mr. Burchfield was also known for his participation in the Legacy Project which created the world’s largest negative a few years ago.
Chris McCaw’s “Sunburn” series features unique gelatin silver paper negatives created in-camera with massively long exposures that push the photographic material beyond its normal responses into solarization. He sees the work as a partnership with “the sun becoming an active participant in part of the printmaking.” 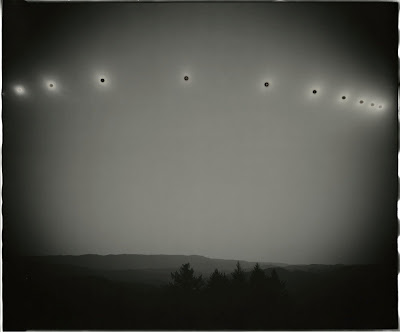 Sunburned GSPS 166 (Mojave Winter Solstice full day) 2007
“In this process the sun burns its path onto the light sensitive negative. After hours of exposure, the sky, as a result of the extremely intense light exposure, reacts in an effect called solarization– a natural reversal of tonality through over exposure. The resulting negative literally has a burnt hole in it with the landscape in complete reversal. The subject of the photograph (the sun) has transcended the idea that a photograph is simple a representation of reality, and has physically come through the lens and put it’s hand onto the final piece. This is a process of creation and destruction, all happening within the the camera.”
Stephen Berkman’s installations reflect a deep interest and understanding of the photographic process. A few years ago I was fortunate enough to see his exhibition at Loyola Marymount University’s Laband Art Gallery. What I was really captivated by were his installation pieces which played with the physical nature of photography and light. 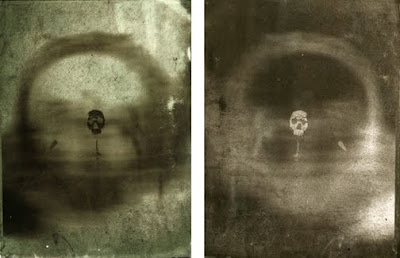 Looking Glass Study, calotype and kosher salt print
Throughout it all, there was a wry sense of humor, as evidenced by his “Looking Glass” piece above, a clear glass camera obscura which is capturing and projecting the image of a cro–magnon skull on its ground glass. Another favorite of mine was Surveillance Obscura, a wooden box-like camera obscura mounted on the wall at ceiling height. The entire exhibition felt like walking in a magician’s workshop.
Amanda Keller Konya has explored the meaning and practice of photography through several series that go beyond the 2-dimensional approach. Her series “Specimens from North America’s most polluted river” features a series of photographs submerged in a jar of the water that is featured in each photograph. Each jar then sits on its own shelf for the installation of the work. 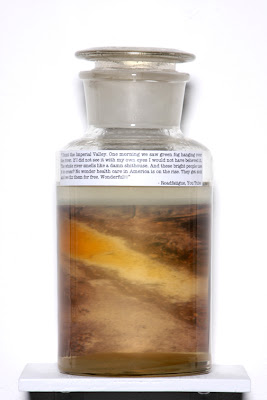 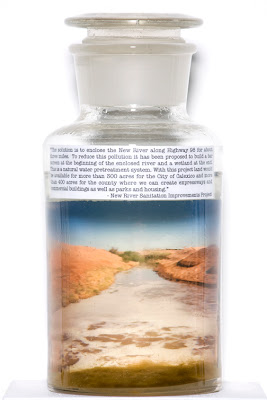 “In addition to the multilayered environmental, social and political issues that provoked my interest in the New River, throughout my photographic practice, I continue to be dedicated to a critical investigation of the photographic medium. To play with ideas of image construction, a reversal of the photographic experience is built into the work. The viewer looks through the river water to access the photographic referent where as one would usually look at the image to arrive at the river referent.”
If these approaches to working with photographic materials interest you, here’s a few more great resources to check out: Chuck Close’s work with daguerrotypes, Photography’s Antiquarian Avant-Guard: The New Wave in Old Processes, Robert and Shana ParkeHarrison: The Architect’s Brother series, Jose Manuel Fors, Artists and Alchemists: the trailer for a documentary on the Antiquarian movement and Scully & Osterman.
My thanks to Dan Miller, Amanda Keller-Konya and Brian Doan for their input and suggestions on this list and my thanks to Aline for allowing me to write this post.